Now that I have your attention...
Yesterday, I actually looked at some 'real' blogs. Experts were sharing their gifts and experiences with their 'followers' and whoever else happened by. They had flashy, annoying graphics and large archives of supposedly credible info standing by. I felt fortunate to have lucked into such a treasure trove, even if the subject matter was foreign to me (they all seemed to be discussing Charlie Sheen, who I've never even met). It was pretty depressing. I'm no expert on anything and only have promises of future content to lure people in here. You must be so disappointed...

So I got busy putting together some fun activities for us to enjoy here.
Watch this page for exclusive interviews with some people you've always wondered about. Charlie Sheen couldn't make it, but some of the more intriguing people in hot rodding will be here soon, spilling their guts for you. You'll be able to join in by using the 'comment' button, if you want. The interviewees won't be here 'live', but they will see your comments and questions - and I'll post their responses to you asap.

Meanwhile, feel free to comment on anything here at any time. Ask questions and I'll answer honestly and promptly. Tell me what you think and I'll listen. Remain silent and I'll remain noisey. The comment button is yours to use as you please. Celebrate your power with as many comments as you want - don't be shy. But don't get your feelings hurt if I excercise my control of the 'delete' button...

It isn't my usual style to talk about what I'm GOING to do, but it just seemed appropriate to give you a heads-up on these interviews, so you don't miss the chance to 'virtually interact'. The subject will always be some aspect of hot rodding (and/or automotive journalism), so I hope that's what you came for. If not, there are enough sites out there (with expert takes on Charlie  Sheen) to amuse you. Everyone's been really patient with this deal so far and I sure appreciate that. The payoff is in the works.
Posted by Scotty Gosson at 3:45 PM 2 comments: 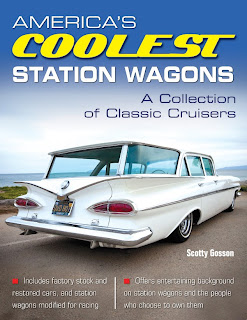 Before this book project, my experience had been writing one feature at a time for magazines. Now I found myself overwhelmed at the prospect of juggling dozens of features. I put the wagons into their respective chapters in order of year of manufacture, for the sake of efficiency. As the project unfolded, I noticed an interesting phenomenon - the first story in each chapter was often the most dynamic. By the final deadline, this was still the case, which I took as a sign from the publishing gods that this book was meant to be. Get a load of this:

Chapter 1 (When Wagons Were Wagons And Horses Were Tired) opens with 'Barefoot Bob' Hardison's depot hack. This guy was already an action figure, way before building the 'hack. He'd carved a canoe from a tree and paddled it from Idaho to New Orleans and back, built a boat to sail around the world and was nearly killed in it during a rowdy storm in the Mediterranian, and put almost a million miles on his motorcycle before deciding to rebuild an original 1914 depot hack to drive coast to coast. He was 73 years old when he hit the road in the 'hack. His escapades during the trip were hair raising, hilarious, heartbreaking and inspiring, all at once.

Chapter 2 (Stock As A Rock) kicks off with Aaron Johnson's Model A woodie, which had been completely restored, then parked for 27 years before Aaron discovered it. He basically kicked the starter, loaded up the family and the dog and hit the road. Now the whole family has rusty tin fever. Yes, it can really happen that way - sometimes.

Chapter 3 (We'll Be Right Back, After This Commercial) starts with the story of how John Stimac grew up admiring the speed shop down the street from his dad's scrap yard, where he worked from childhood until retirement, then bought the speed shop from the 90 year old owners. It's still thriving today and John built a dandy Deuce delivery shop truck to keep up with orders.

The Dave Lyon story jumpstarts Chapter 4 (Beaters!!!), big time. Dave's childhood was peppered with stories of an infamous '40 Ford delivery that not only was involved in many local highjinks, but also did multiple stints at Bonneville as a push car. But he never actually saw it until decades later, when a chance meeting at a swap meet finally led him to the car he'd grown up with in his head. He (literally) dug it out of 42 years of hibernation and drove it into the sunset.

At the beginning of Chapter 5 (Utilitarian Customization), we meet Jason Wolfswinkle, who'd worn out his old hot rod and needed a new one that he could fit his family into. He teamed up with Squeeg's Kustoms to build the ultimate '33 woodie and when you see it, you'll have to concede him victory. It's a masterpiece of craftsmanship (understatement) and gets driven like a rental.

In Chapter 6 (Draggin' Wagons), we begin with a look behind the scenes of a car you've seen before - Larry Fator's '46 Chevy delivery. The story of how Larry came to own his childhood dream car (twice) is amazing enough, but we managed to sneak in some details not disclosed in its many magazine features... Luckily, we have no advertisers to make nervous, so why not go for full disclosure?

Chapter 7 (More Longroof Motorsports) comes smoking outa the gate with our own Scott Parkhurst's '67 Chevelle road race wagon. This car was mostly built while Scott manned the Tech Editor chair at Popular Hot Rodding. He uses the feature as a pulpit to challenge other wagoneers to step up their game and try to match the Chevelle's level of craftsmanship, competitiveness and road worthyness. You'll have to read the rest of the chapter to decide for yourself if they've met his match or not.

Scott will be on this blog soon, providing insight into how he got here from there and what the future might hold for him and us, both.

So now you have some idea of what to expect if/when you crack the book open. It was an absolute riot to write! I hope it's half as much fun to read. We'll all find out in a few short weeks.
Posted by Scotty Gosson at 12:18 PM No comments:

"... and they never found the body!" What? Oh, Hi guys! Where was I? Oh yeah, my editor pressed the GO! button on his stopwatch and it was time to start writing the station wagon book.

Being the Forrest Gump of hot rodding, I've accrued many contacts around the country, most of whom I call friends. So my station wagon research became an instant social event and before we knew it, we had wagons of every stripe, stacked up like cordwood. Like any Scotty project, this was a grassroots effort, with one lead leading to another and so on. Another grassroots aspect was the lack of a travel or photo budget, meaning most wagons were shot by the owner/builders, lending an even more personal touch to the proceedings. The result was akin to browsing through someone's personal photo album - very intimate. There are plenty of spectacular shots from famous protographers, but they're balanced out by DIYers who really delivered some cool goods. And as stated before, everyone has an amazing story. I'm so honored to be trusted with the stories of these people and their cars. Just more Gumpism...

We organized the stories into chapters:

Chapter 1: When Wagons Were Wagons And Horses Were Tired
(A glimpse at the journey from plankboard to styling statement)
Depot Hacks, stock and otherwise.

Chapter 2: Stock As A Rock
(Just like mom and dad used to drive you to baseball practice. Kinda.)
Self explanatory.

Chapter 3: We'll Be Right Back, After This Commercial
(Were commercial vehicles the first personalized wagons?)
Wagons and sedan deliveries, still on the job, delivering goods for business.

Chapter 4: Beaters!!!
(If ever a car was built to be used, it's the humble station wagon.)
All of my cars fall into this catagory, intentional or not!

Chapter 5: Utilitarian Customization
(And each one open to interpretation.)
Custom wagons, from Ridler winners to scrappy beaters.

Chapter 6: Draggin' Wagons
(With enough rear overhang to really put some weight on the slicks, wagons hook and book!)
Street and strip sprinters.

Chapter 7: More Longroof Motorsports
(Sure, demo derbying is obvious, but road racing wagons?! And more...)
You name it, someone's doing it with a wagon. Lots of surprises here.

Coming soon, a Scotty Gosson Exposed! exclusive: A candid conversation with my eloquent and outspoken editor Scott Parkhust, who's own wagon is one of the wildest in the book. Scott might even answer some of your questions, so be thinking of how to trip him up...

Posted by Scotty Gosson at 10:59 AM No comments:

Just in case you didn't know...

Henry Gregor Felsen's entire series of teenage car culture books, written and released in the 1950s, is being updated and re-published by his daughter Holly, in the order they were originally released. So first out of the box is 'Hot Rod', with an eyebrow raising introduction by Holly, complete with never-before-seen photos from the family album, shot by Holly herself, back in the day. She also added fun photos to open each chapter. This series has been out of print for many years, making this big news to those who grew up with these entertaining and insightful books.

I first discovered Felsen's books in my junior high school library and they made a major impact on me that lingers today. This is timeless writing. I finally connected with Henry about a year prior to his passing. He encouraged my writing and inspired me to be a better person - one of the most open and warm people ever. I crossed paths with Holly about a year ago and am honored to call her a friend today. We trade encouragement and info regularly.

Get your copy of Hot Rod at henrygregorfelsen.com or at amazon.com  Tell 'em Scotty sent you. Enjoy!
Posted by Scotty Gosson at 3:33 PM 2 comments: