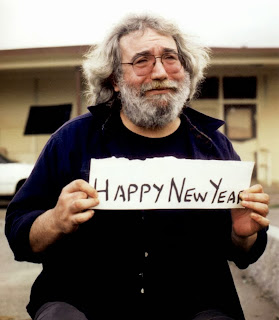 That signpost up ahead... It looks a lot like the one in the rearview mirror. Is this some kind of deja vu juju? Attempts to adjust the picture and sound have proven futile. Where are we? Where are we going? 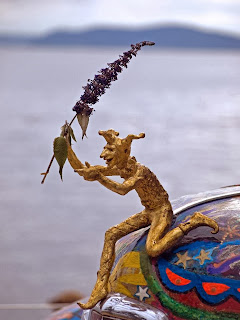 Hopefully, we're all going "Further". Eugene, Oregon sculptor Peter Helzer cast this hood ornament for Ken Kesey's Merry Prankster bus. It depicts a tiny Kesey pointing ahead, but we seem to have come full circle now. Are we just driving further into the circle? I once logged some miles on the bus and sensed we were actually going "Elsewhere". But what do I know?

We've done it again. Another parts store calendar in the trashcan and we're 365 days closer to the checkout counter. We'd better make this year count. Who'da thunk our fuses were long enough to reach the year 2014? Many of us should have been dead a hundred times over by now. Yet here we are, driving through the very future we could only guess at, yesterday. 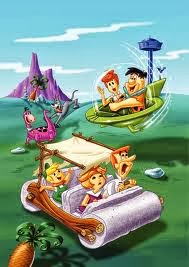 2014 could prove to be the biggest culture collision since The Flintsones met The Jetsons in a twisted cosmic time warp. How so? 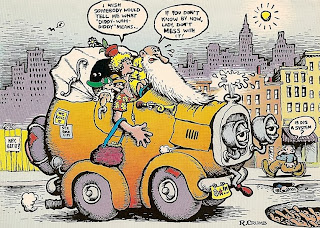 It seems like only yesterday that we were aimlessly trolling for adventure... 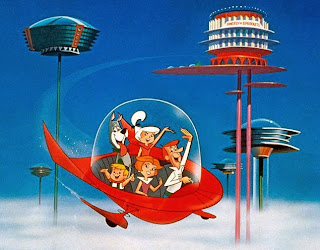 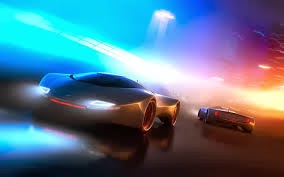 Cadillac's thorium-fueled concept car takes us a little bit closer to that possibility, but is still anchored to Earth. 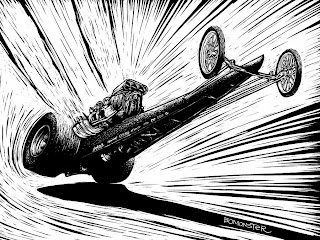 America's most esteemed engineers are feverishly working on a solution to the gravity problem. 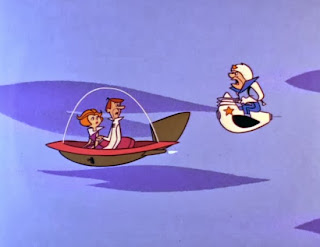 Of course, defying gravity won't solve everything. As long as humans are at the controls, there's going to be trouble. 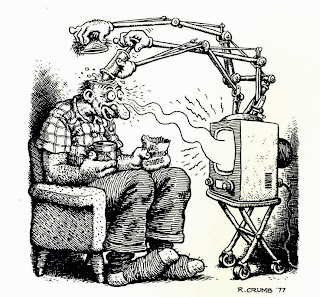 Luckily, a lot of us work from home now, which eases the pressure on infrastructure. Here I am, taking a little break from the keyboard. 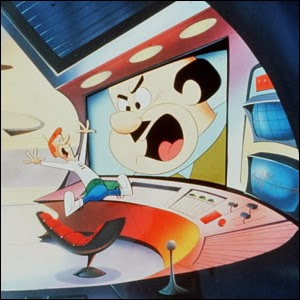 Still, there are times when even the most dedicated employee must get out for some fresh air and exercise... 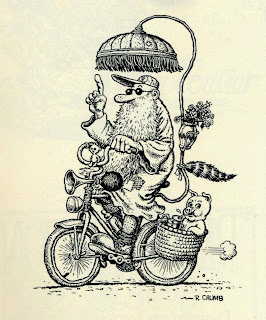 Irony of ironies, over 100 years after the industrial revolution, bicycling has made an enormous comeback and humans are getting in shape again! For something. The zombie apocalypse?

Maybe we're preparing for the day when we finally convert the hot rods into hovercraft. 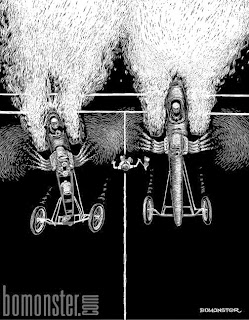 One sure thing: 2014 is the make-or-break point for the NHRA. The Big Show has suddenly become dramatic again - for all the wrong reasons. 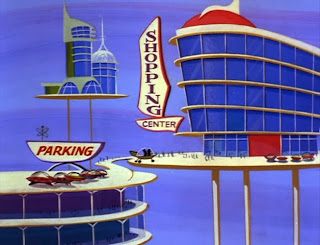 BOLD PREDICTION: Should it survive 2014, the NHRA will operate out of a rented office in a Glendora, California shopping center, built on the former site of Astro Dragway (the sacred burial ground of Wally Parks, and surprisingly, Jimmy Hoffa). They must be humbled to survive.


An inordinate amount of my time in the sixties was spent ensuring that my hot rod friends didn't know about my hippie musician friends, and visa versa. I was a double agent. There was no way I could've envisioned this day of equality - one big respect fest. We're all in this together and no one gets out alive. 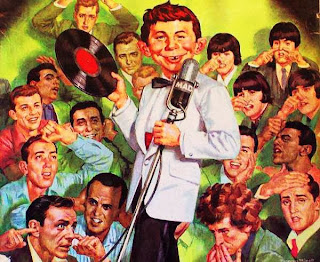 Me again. Still rockin' the kids, over half a century since discovering the forbidden "race music". 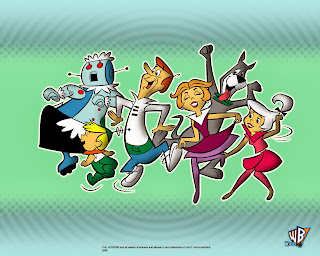 As long as people, robots, and dogs want to shake a tail feather, I'll keep rockin' like Dick Clark... 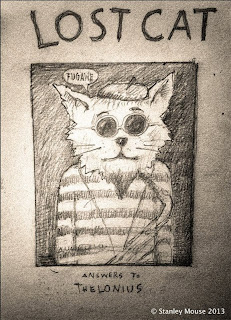 The cat population has declined over the years, but their contributions live on and continue to inspire. 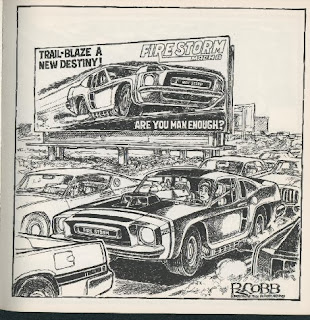 Through it all, strides in high performance continue, from seedy backyard garages to Detroit engineering laboratories, still driven by that demon "jungle beat" soundtrack. It is getting harder to find a place to exercise your horses though... 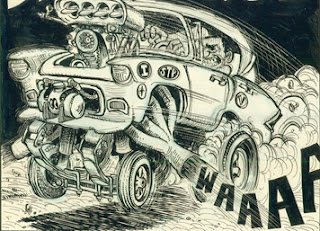 ... Actually, this is one area where my peer group hasn't grown an inch. We're still knuckledraggers, one and all. We keep up on the trends, but stick to ancient basics, ourselves. Jeez, are we hampering the  evolution of the species?

Imagine the contributions we crusty old hot rodders and racers could make to the new Utopia. Our hands-on know-how could help improve everyone's quality of life! That seems more noble than selfishly focusing on our polluting money pits... But would it be as much fun? Is this the reason why we've lived so long and learned so much? To tear the old structure down and build a new grassroots society from scratch? We conducted that social experiment in the sixties, but it all fell apart in short order. Could we make it work this time, knowing what we now know? Or should we just fry rubber into the sunset, while there's still some oxygen left in the atmosphere to help burn the fuel? 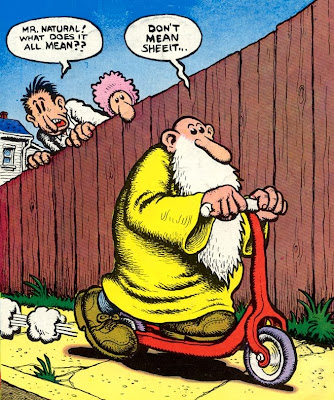 Mr. Natural may be right. But yesterday's fun experiment could prove to be training for surviving today's reality, as radioactive Karma continues to flow across the ocean, from America to Japan and back again ... Remember Godzilla!


Some festive New Years imagery for those who may have slept through it: 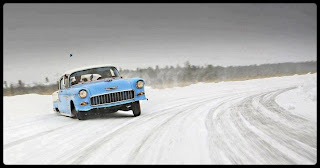 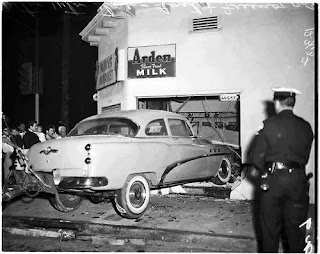 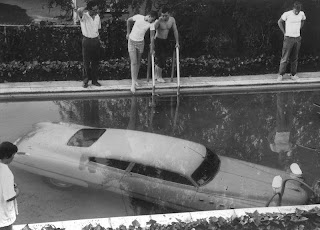 On last week's Christmas post, we tastelessly poked fun at alcohol consumption, and drunk driving in particular. To clarify: There's sophomoric blog comedy, and there's reality. Before you even consider driving while buzzed, please take a moment to contemplate the ramifications. If you lose it out there on the road, the result doesn't just ruin your day - the ripple effect deeply scars everyone who ever gave two shits about you. Not to mention the people whom you may take out with you. Plus, you could scratch up your ride! 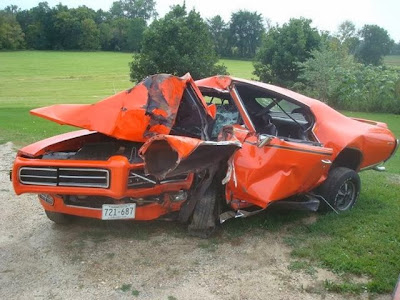 Someone put a lot of work into this GTO. Oh well. The driver's fate will be decided by - Da Judge! 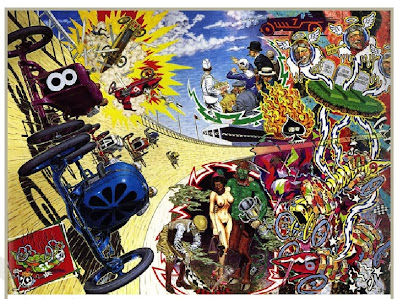 With a major deadline looming (at midnight of December 31), little time was allowed for this decidedly sober New Years party post. The consequent lack of content is certainly a blessing to most, but someone is bound to complain about not getting their money's worth. Sorry, but the squeaky paying customers (publishers and editors) get greased first. Regarding the side effects of such deadline fever (sleep deprivation in particular), Uncertain Steve Scott quips, "I think that's what's called The Living Dead Writers' Society. Or is it The Dead Writers Trying to Live Society?" I think he's right on both counts...

Some of my artist heroes, in order of appearance:

This concludes our special series of holiday blog posts. Next week: Back to the grim reality of having fun with cars and relaying the giggles to print.