A FAVOR FOR A FRIEND 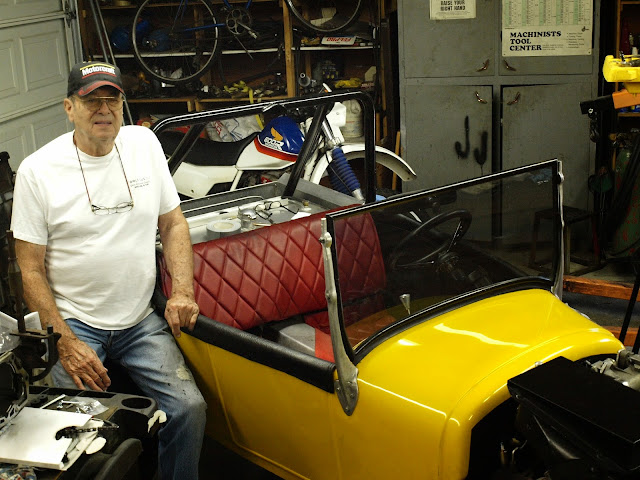 My friend Jeff harbors a deep-seated suspicion of photojournalists. Can't blame him. Yet he posed politely for this portrait in his home garage in 2012. He was doing me a favor. He was very clear about that.


"A favor for a friend." That's how my pal Jeff described his decision to finally surrender to my constant badgering to write his life story. After nearly a decade of harassment, he finally caved in the winter of 2004, and the interviews began with a gentlemen's agreement that the story would not be published until after his passing. We spent a lot of time in the cluttered office of his cluttered shop over the following eleven cluttered years, poring over musty photo albums and magazines. In the end, I had some juicy stuff, but knew there was more lurking behind the guarded boundaries of this dynamic but stoic man.

Time ran out for both of us last Tuesday. Jeff had agreed to help with the build of the 2.3 Ford (his specialty) destined for my Model A. I called him to make arrangements to begin the long-planned build, but his daughter answered the phone instead, and informed me that he was on his way out. Jeff Jahns died two hours later.

I'm shopping Jeff's story around to the magazines this week, but it's a hard sell. At 4,900 words, it's too long for a magazine and too short for a book. So you might be reading it here, instead. Stay tuned. The only selling point of value to the magazine editors is that Jeff was the last genetic link to the Jahns Pistons legacy. It was a link that he broke repeatedly. Jeff Jahns was most definitely his own man. Though he embodied independence, he was also every rodder's friend. 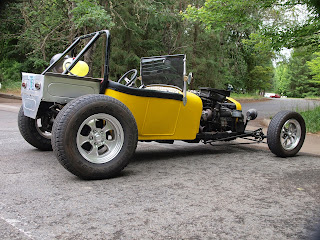 Jeff  left behind a list of the people he wanted at his funeral. Most were racing and hot rod pals, like me. The service was a short and intimate affair, at a park on the edge of his adopted Grants Pass,Oregon hometown. Jeff's last roadster of many (featuring turbo 2.3 power, of course) marked the spot. 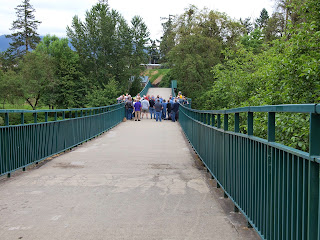 We met on a bridge spanning the Rogue River (which could very well have been named for Jeff). 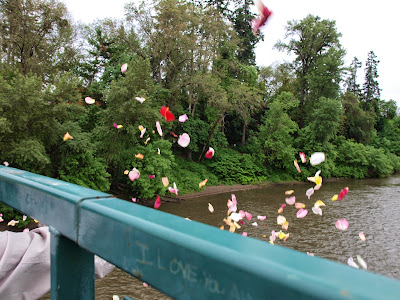 I've heard this is illegal now, so please keep it between us, but Jeff's ashes (and a lot of fresh rose petals) were tossed into the Rogue, accompanied by a mournful trumpet solo. Our grief was juxtaposed with a joyful acknowledgement that Jeff's suffering was finally over, eleven years after being diagnosed with bladder cancer. The passing of Jeff's wife Carol last year didn't ease his pain any. Fellow gearhead Bob Anderson was Jeff's last caretaker. He told me Jeff's last four months were hellish. He's pain-free now. (Scotty shots) 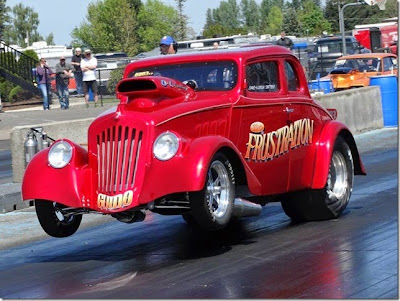 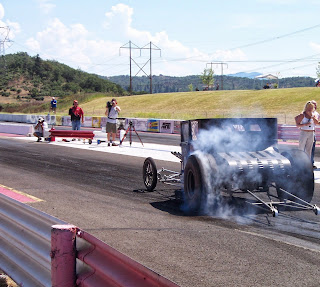 Doctor Lockjaw's old Tetanus T sold this year to racing pal Walt Skonzykis (sorry about the spelling, Walt), who has now decided to put it on the street. Walt followed Sattem's lead, and his first call was to Twisty Ron. (Scotty shot) 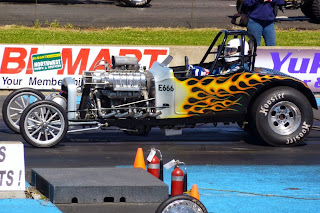 Walt's go-to ride is the Evil 666 T roadster. Count those zoomies. The correct answer is six. (Photo courtesy of Walt) 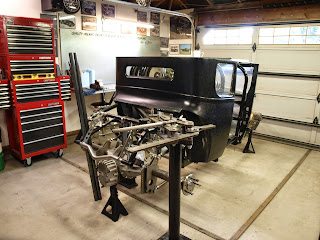 When Walt dropped the Tetanus coupe by Twisty's shop, Doc and I were all over it. We were stoked to find more than "a few" changes on Twisty's to-do list. 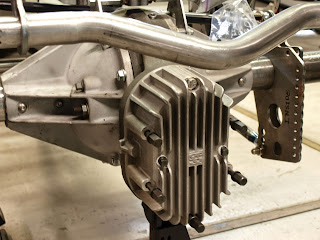 The 9" Ford rearend that Doc had installed has been replaced by this beefy quickchange, to facilitate both street and strip activities. 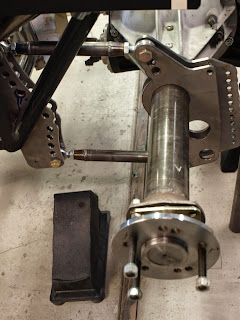 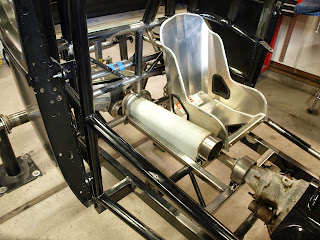 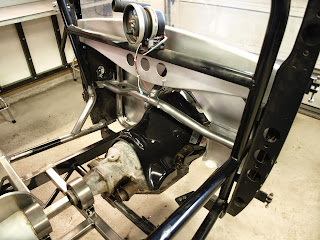 The 6', 4" doctor was the only one who could reach the pedals in this thing (he mounted the seat way back), so mortal-sized Walt redecorated the interior, too. Twisty will add new tin and a few more tubes. 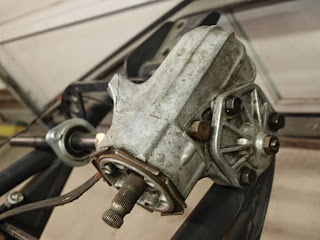 SGE regulars will recall my Mopar steering box phase. It was re-triggered by Walt's intended T tiller, so I couldn't resist this snapshot. Okay, I'm over it. Again. For now. 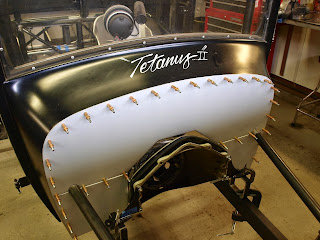 Doc and I were both deeply touched to see that Walt left so much of the car's previous identity intact. The new streetable Tetanus will have trick motor mounts to accommodate both V-8 and inline six propulsion. 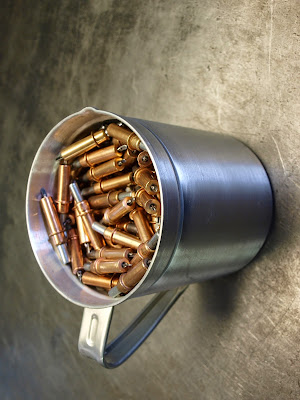 Cleco fasteners (kinda like quick-release rivets) are a fabricator's best friend. And Twisty Ron is the best friend any aspiring race car owner could hope for. But why, why, why do random photos go sideways? Damn you, Blogspot.com! (Scotty shots) 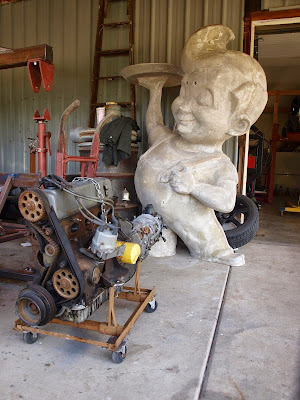 While awaiting his new paint job, Big Bob has been guarding the SGE Model A's mighty powerplant at the Custom Metal shop. Thanks, pal! 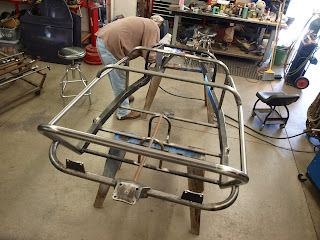 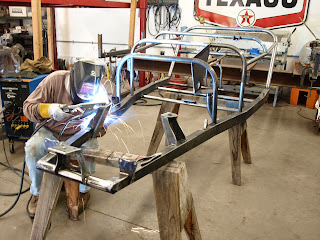 In preparation for transporting the SGE Model A to it's new home, Doc finish-welded the tacked chassis... 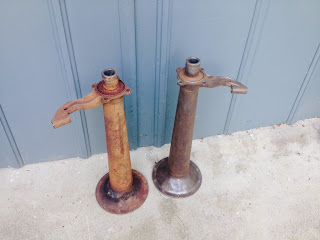 ...while I cleaned crusty parts in preparation for chassis assembly. These axle bells (among myriad other components) were treated to a wire brush massage (via my poor old electric drill), new bearing races were installed, and the rearend was semi-assembled. 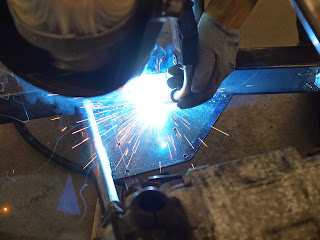 I threw Doc one last curveball on the morning planned for reassembly. I finally scored a set of the EMPI pedals that I've been hunting for, and wanted to install them. How good of a friend is Doc? No one would have blamed him for tarring and feathering me. Instead, we fabbed a quick-but-tasty mounting bracket, and Doc zapped it in. 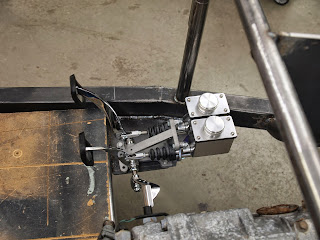 With pedals located, the final piece of the chassis puzzle is solved. And Doc and I are still on speaking terms. A miracle! 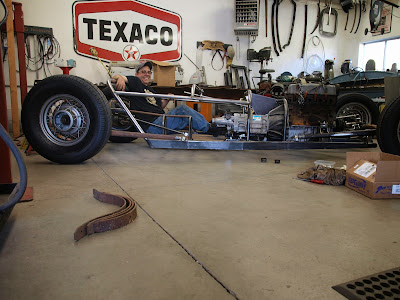 Last weekend, we stuck the chassis together good enough to roll around the shop and make engine noises. This image captures the first moment it has ever been thoroughly mocked-up and set-down, revealing our ride height calculations to be right on target: 4" in front, and 7" at the rear. While seated, I can effortlessly reach out and touch my fingers to the ground. It's low. In the foreground are some of the leaves to be added (later) to safely support driver and drivetrain. This was a big day in Scottyville. It's been 36 hours now, and I'm still grinning. Thank you Doc, for directing the most fun and satisfying build I've been involved with since the Tetanus T. This is friendship in action. I can only hope to repay the favor by not embarrassing you too much with the final result of your efforts. (Photo courtesy of Dr. Lockjaw)


While cruising the funeral circuit, I also attended services for R. Charles Snyder (known locally as "Our Charles") at the Britt Festival amphitheater in Jacksonville, Oregon. These sacred grounds host the annual summer-long music fest that brings all the name players to our area (from the Punch Brothers to the B-52s to the Decemberists). An apt venue for the region's most popular radio DJ. I only met Charlie once or twice, so can't claim to really know him. Then what does Our Charles have to do with this "Favor for a Friend" post? Charlie was friends with my brother Mark, and gave him his big break in the radio biz. Charlie was a hero to most for bringing Ozzy Osborne and other top acts of the era to town, but his selfless gesture made my brother happier than at any other time of his life. For that, Charlie has my eternal gratitude. Bonus: A rapt student of the craft, Charlie once attended our local dirt oval races to study the track announcer. When the race began without the hired MC, Charlie (not a car guy) was pressed into service. That was in 1976. From that night up to his passing, Charlie announced every single race at the storied Medford Speedway. 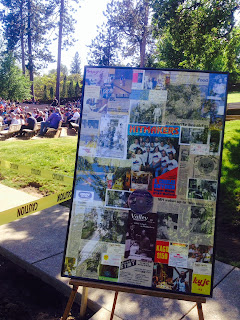 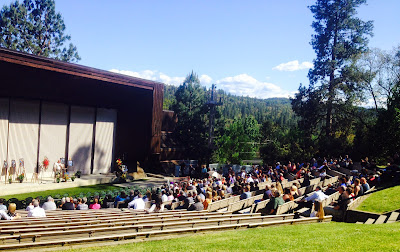 A portion of the local populace who skipped work on a Friday for one last taste of Our Charles. Brother Mark was slammed at the Lithia VW parts counter and couldn't get away. Cruel injustice, but Mark kept his job, while several of these guys were put on notice. (Scotty shots)