During the agonizing off-season (AKA: Detox Month), drag fans were jonesing for any crumb of pertinent news. We were so desperate that we made a big deal of John Force applying new decals to his cars. At least the Oregon Ducks kept the football season interesting (Coach Helfrich: While you're restocking Defensive Backs, send a scout down to Santa Monica and check out Mikey Sorokin at St. Francis High School. This kid is breaking DB records left and right, and his family history is media exploitation gold!). Then last week, we all read the letter sent from NHRA suits to the principals of the Discovery Channel's Street Outlaws "reality show", informing them that their NHRA Competition Licenses will be revoked if they continue to glorify street racing with NHRA stickers on their cars. That woke everyone up. 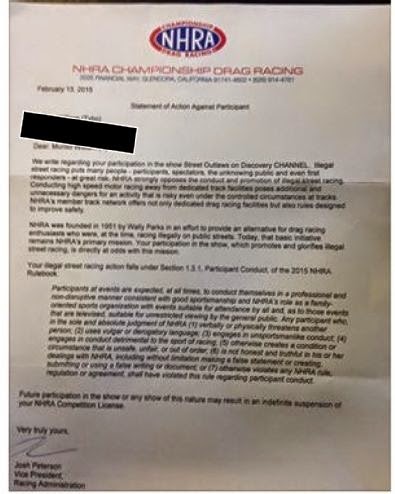 The Letter arrived on the social media circuit last Monday and stirred up a hatestorm of kneejerk reaction. As it turned out, this was only the opening act. (Photo courtesy of Dragzine) 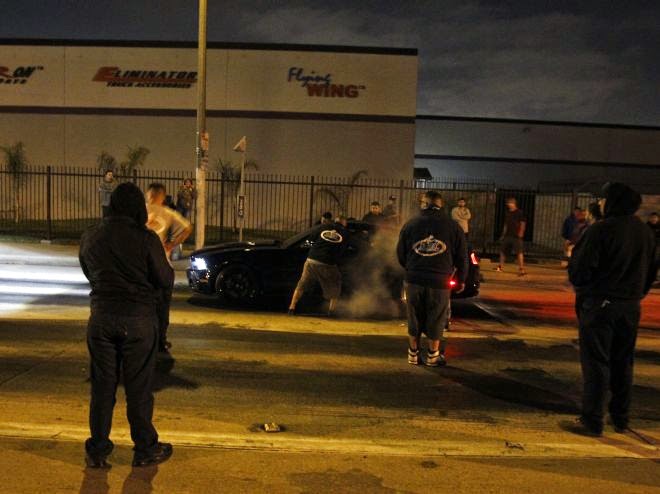 From the set of Street Outlaws. Heroes or zeroes? Your call. (Discovery Channel photo stolen by NHRA before being stolen by every drag site online, then stolen by SGE)

NHRA Public Relations drone Geno Effler was dispatched to explain the oxymoronic non-profit corporation's stance on the issue, and it made reasonable sense. I've been in Effler's position (at a much lower level), and know just how much fun it isn't. He brought the voice of reason to social media's herd mentality and escaped without being trampled. Some people even listened to him and heard the message. Amazing. 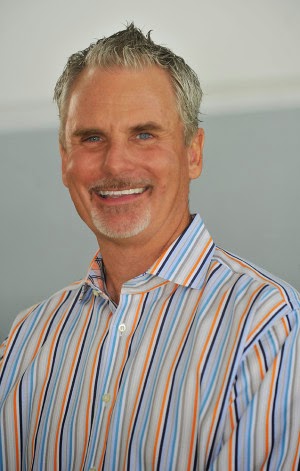 Geno Effler, this week's face of the NHRA. He had some 'splainin' to do. And he did it. (Photo courtesy of NHRA)

About 24 hours after the dust settled from The Letter aftermath, the NHRA announced the sale of their Pro classes (Top/Fuel, Funny/Car, and Pro/Stock) to an entertainment conglomerate two months previous, and the acidic interweb storm resumed with renewed fervor. I assume this means the rights to promote their Big Show events were sold, and not the events themselves - but details (as usual with NHRA) remain murky. Where was all of this juicy blog fodder when we were stuck watching Knitting with Nancy reruns on PBS? NHRA Top Dog Tom Compton explained that funds from the sale would ensure survival of the Sportsman ranks. Several sportsman racers interpreted the announcement as corporate-speak for "Funds from the sale will insure Compton's survival in a manner he has become accustomed to, even after being run out of town on a rail" (I'm paraphrasing quotes from anonymous sources here). 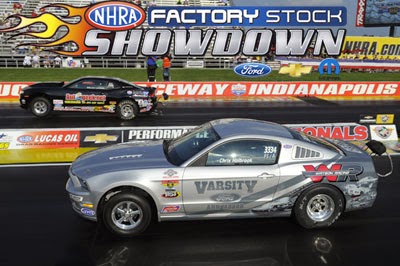 Two days later, still waiting for the nuts and bolts spinning around my brain to slow down, a ray of light arrived from the International Brotherhood of Street Racers (or what's left of them). 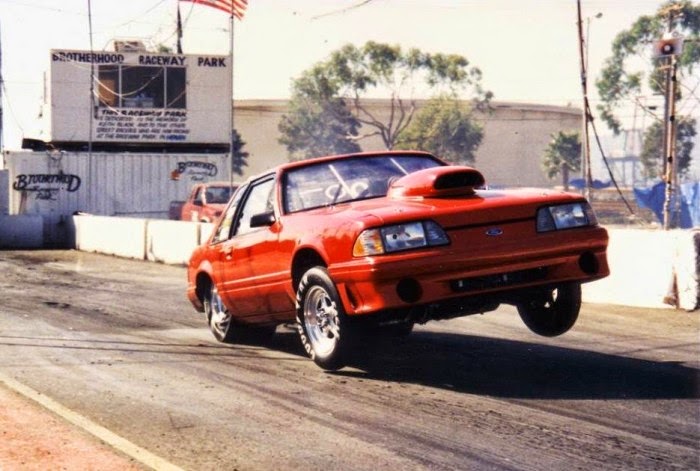 Brotherhood Raceway Park on Terminal Island in L.A.. Finally, cars and people that the average bear can relate to. These are Sportsman racers.

The Street Racers' quest to return drag racing to Terminal Island is gaining momentum as signatures on their petition to the Harbor Commission pile up. This could happen. Big Willie and Tomika are gone, but the racers' desire to run remains. They just want a place to do their thing where they're safe from arrest, and where the citizens are safe from the racers. You can learn more and sign the petition here: http://lastreetlegal.org/ 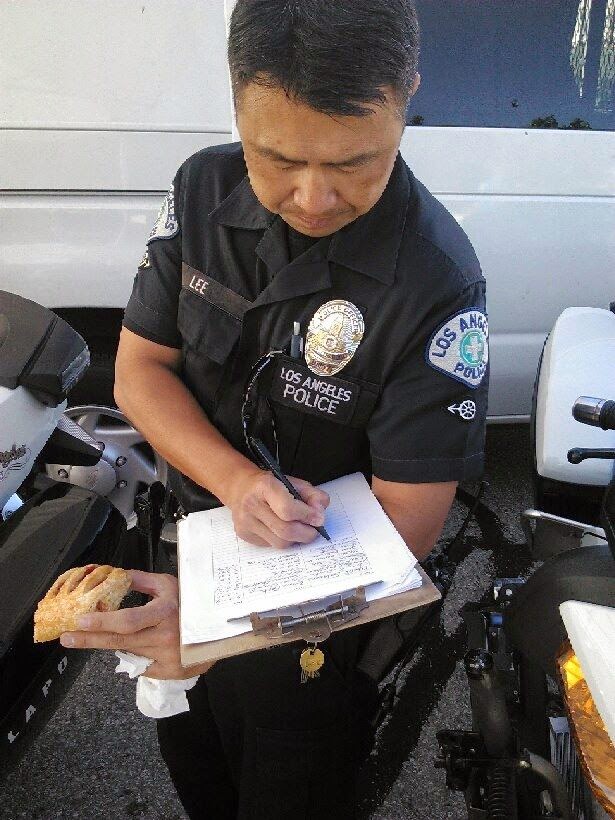 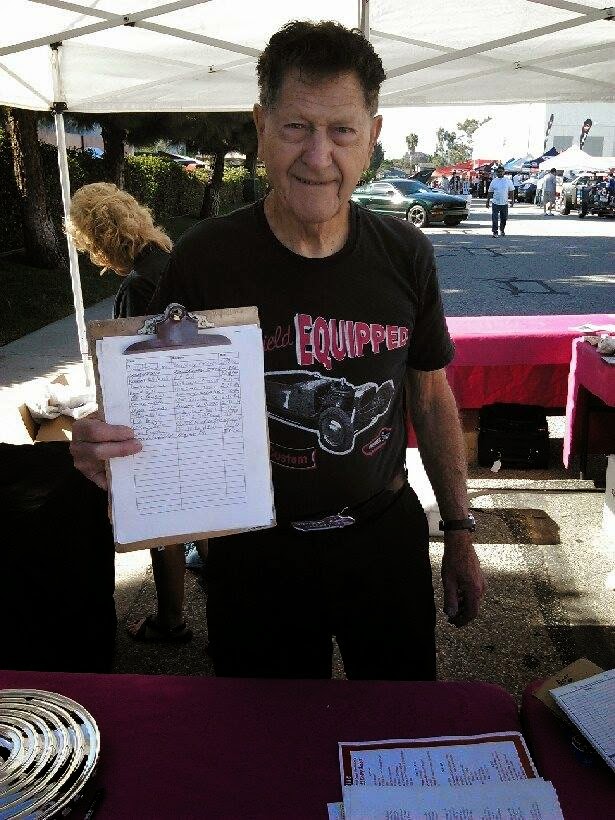 These upstanding citizens have signed the petition. Why haven't you? (Photos courtesy of International Brotherhood of Street Racers)

Man, what a week! I need a nap... Meanwhile, stay tuned. There's a reason why SGE is America's most trusted automotive news source! I have no idea what that reason could be, but I think I read that phrase somewhere, so it must be true. 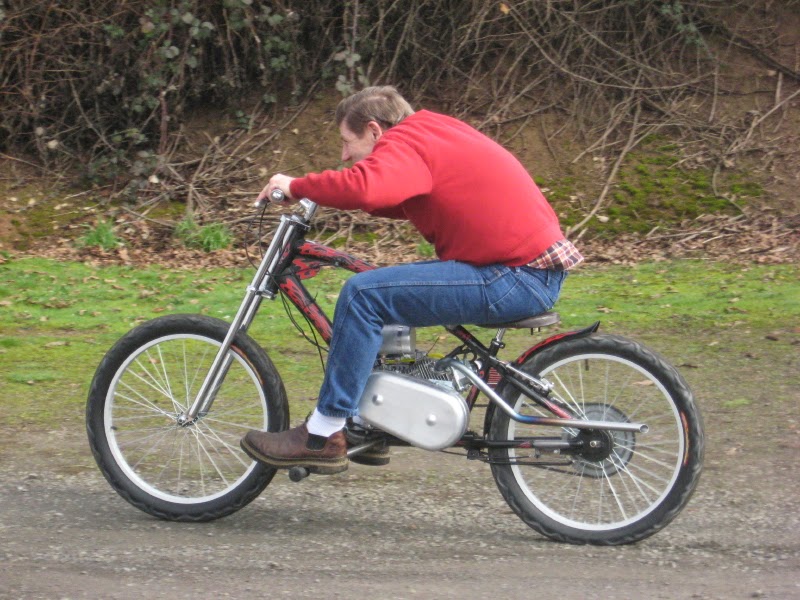 Marty Strode has finally unleashed his Stallion motorbike: "It has great low end power and plenty of speed. I'm satisfied with how it rides. The next thing is to take it apart for powder coating. Mitch Kim will do his magic on the tank and torque converter cover, once they are clear anodized." 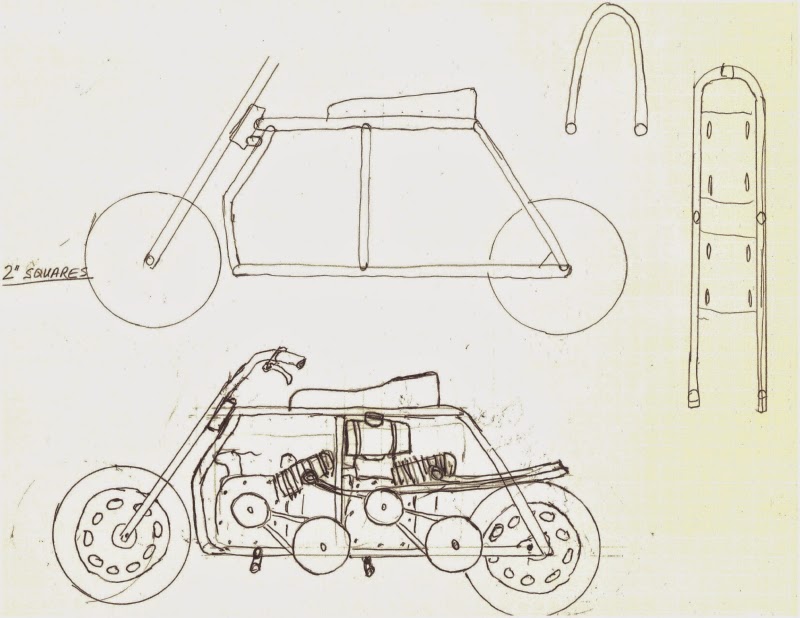 Marty's brother Tom is definitely not one to be outdone. Their rivalry is legend, but now the Strode Bros. have reunited to build the ultimate homebrewed mini-bike. Meet the "Twin Power" scooter. "Two 212cc Predator engines will power this machine." Thanks Marty. We'll be sure to stay the hell out of the way of this one. (Secret spy photo by Mr. X) 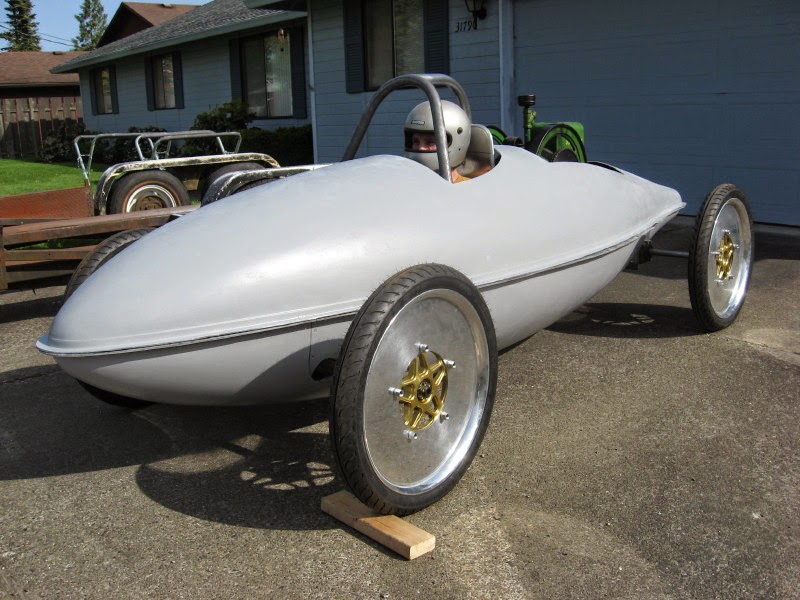 Lonnie Gilbertson's "Hit and Miss Special" was built largely at Marty Strode's shop. The highly modified single cylinder John Deere engine is now a runner, and plans are underway for an assault on the salt in 2015. Target: 55 MPH. (Photos courtesy of Marty Strode) 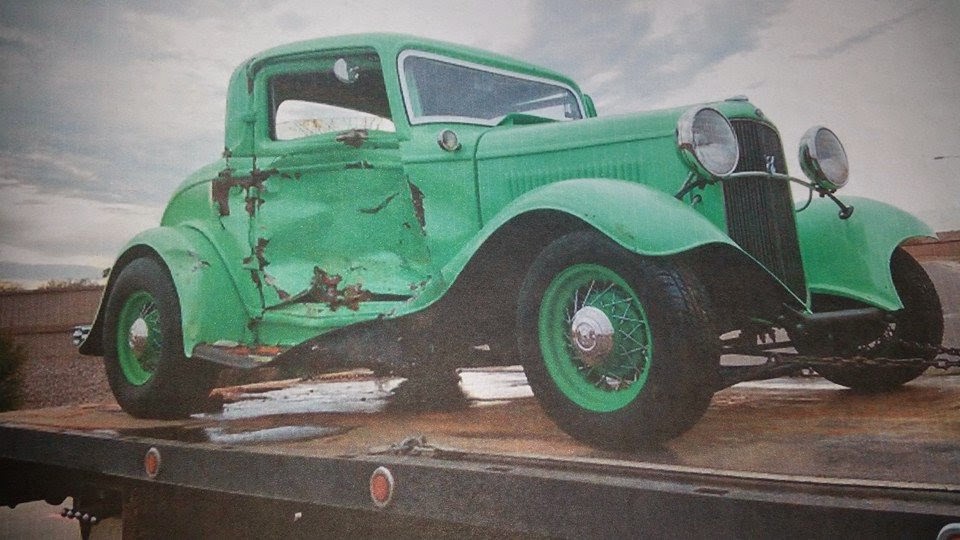 Last week, we introduced you to Shawn Shirley and his Arizona Anglia. This week, Shawn reports that his friend Lenny (who has owned this Deuce for more than 40 years) was T-boned in traffic, following a 17 year upgrade of the car. Lenny is hospitalized, but is expected to make a full recovery. The coupe's future is uncertain at press time. Drive defensively! 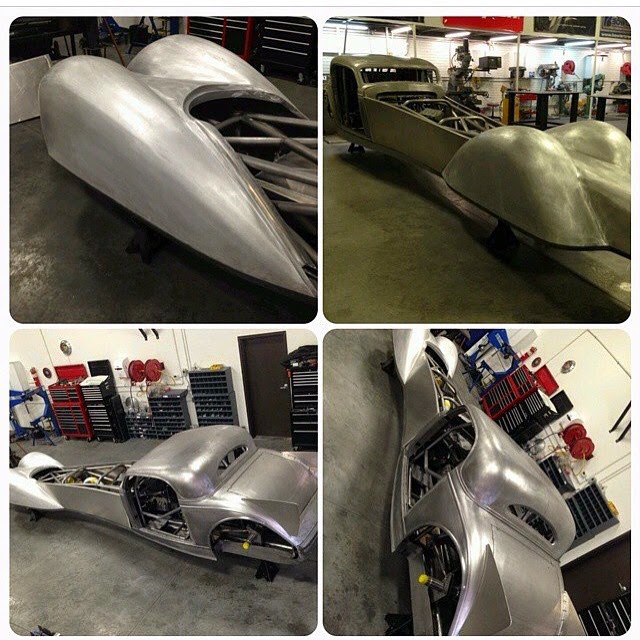 Previously on SGE, we published secret spy photos of the '34 Chevy coupe project at Cal Creations. The Bob Thrash-designed bodywork is now being realized in glorious 3-D. The focus last week was on the aero nose-piece and wheel pants. That's a lot of compound curves to pull from a sheet of steel. (Photos courtesy of Cal Creations) 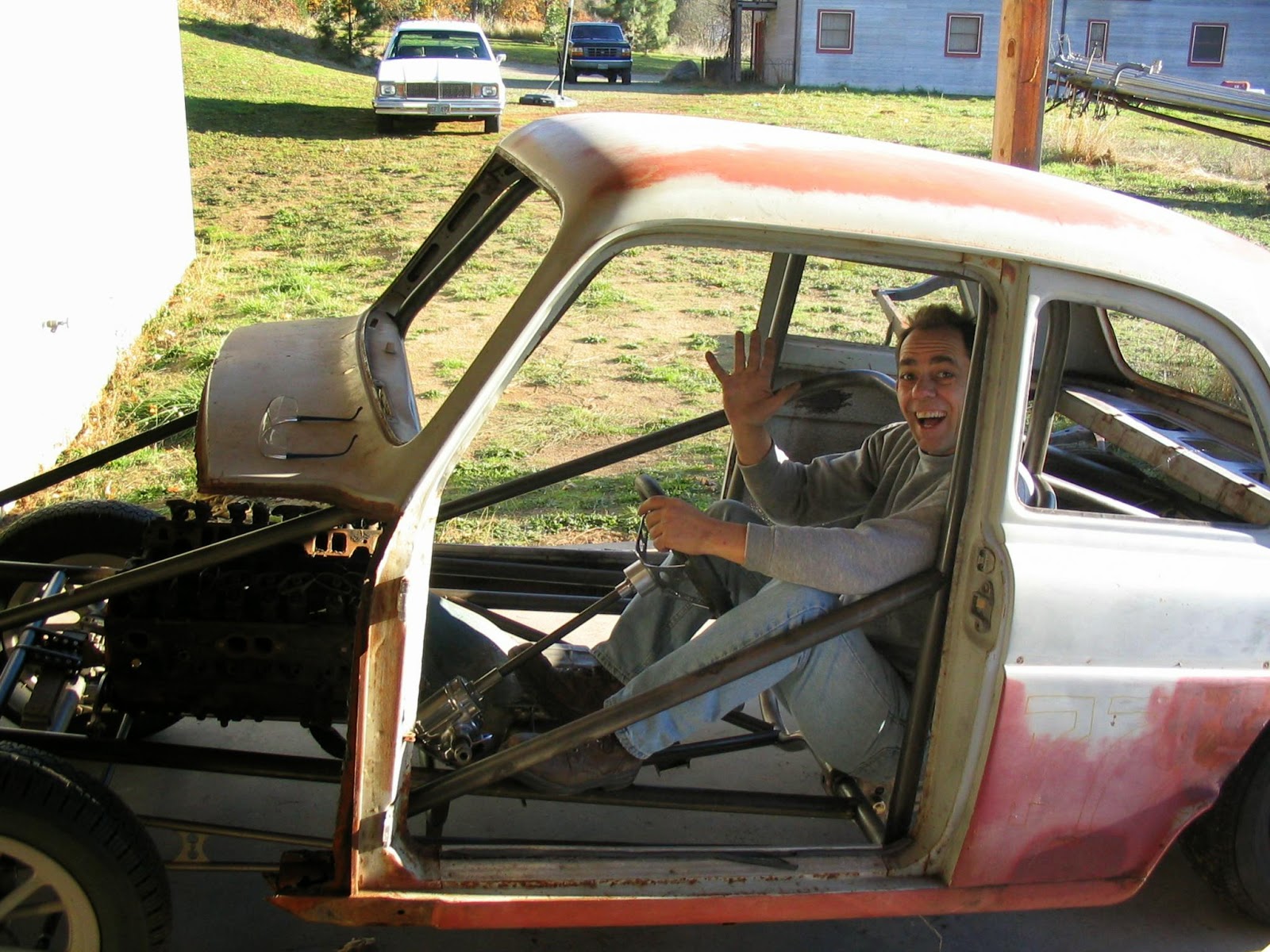 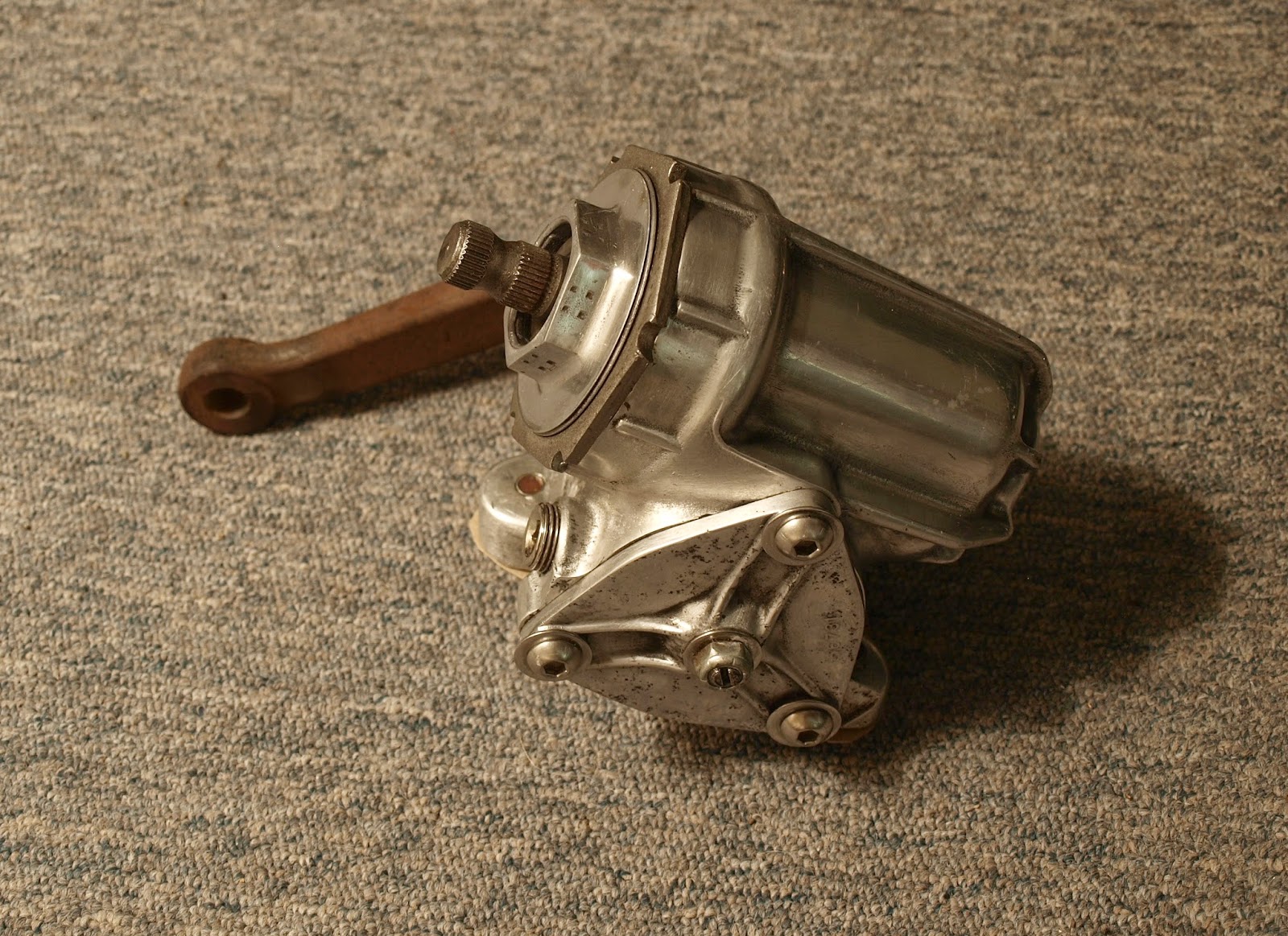 Last week, Rick Smith pulled the old BTU steering box from his barn (I believe he swapped it for a Vega unit in the BTU) and hand delivered it to me in Oregon. This is the kind of friends I have! Work on the SGE Model A was cancelled last week, due to a nasty case of Deadline Fever, but will commence anew this Sunday, with the focus on steering box placement, thanks to Rick Smith. We'll be there with camera shutters blazing to cover this dramatic development for the SGE nation. (Scotty shots) 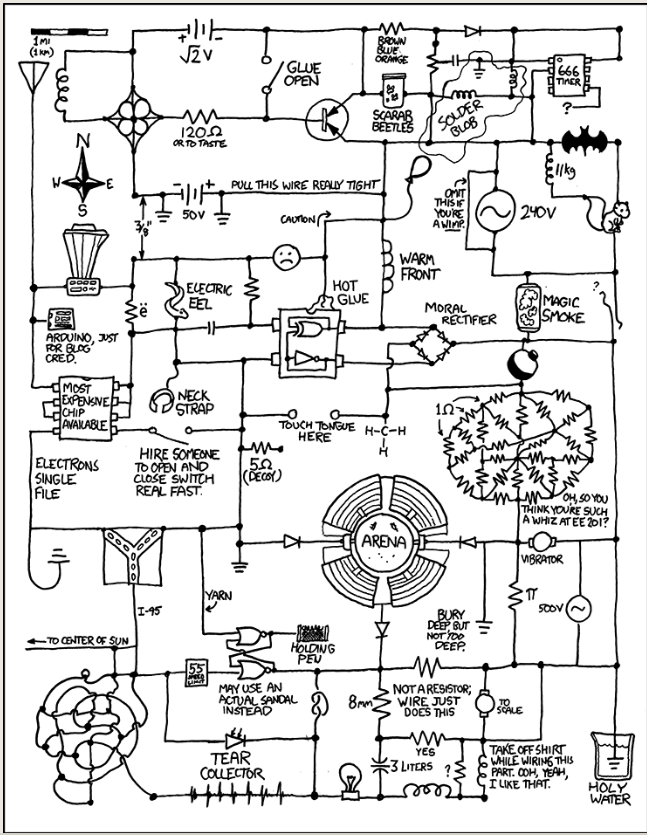 Hey Kids! If you're reading this blog, you're obviously sharp enough to find the squirrel hidden in this wiring diagram. But in a broader perspective, this schematic could very well explain how squirrels are wired. Squirrels like us, anyway. (Image courtesy of Motormouth Ray) 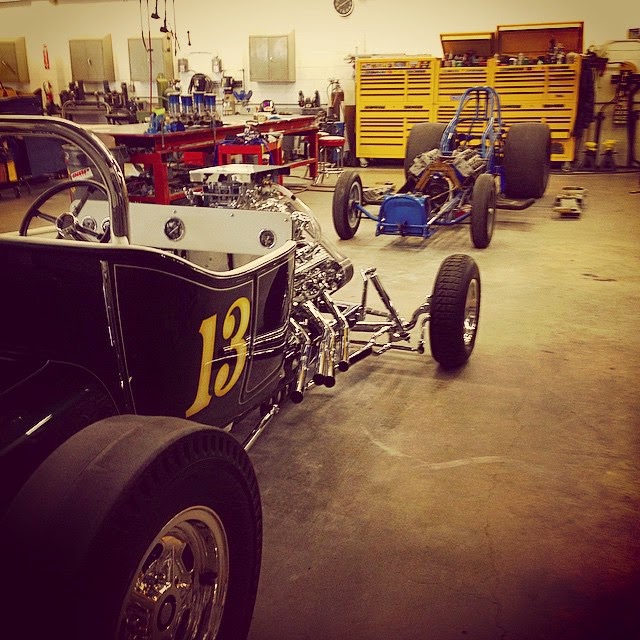 The yellow monolith is one of several boxes used by Dave Shuten for building the endless procession of wonderful toys at Galpin Ford in Los Angeles. Yes, we are experiencing severe box envy. (Photo courtesy of Dave Shuten) 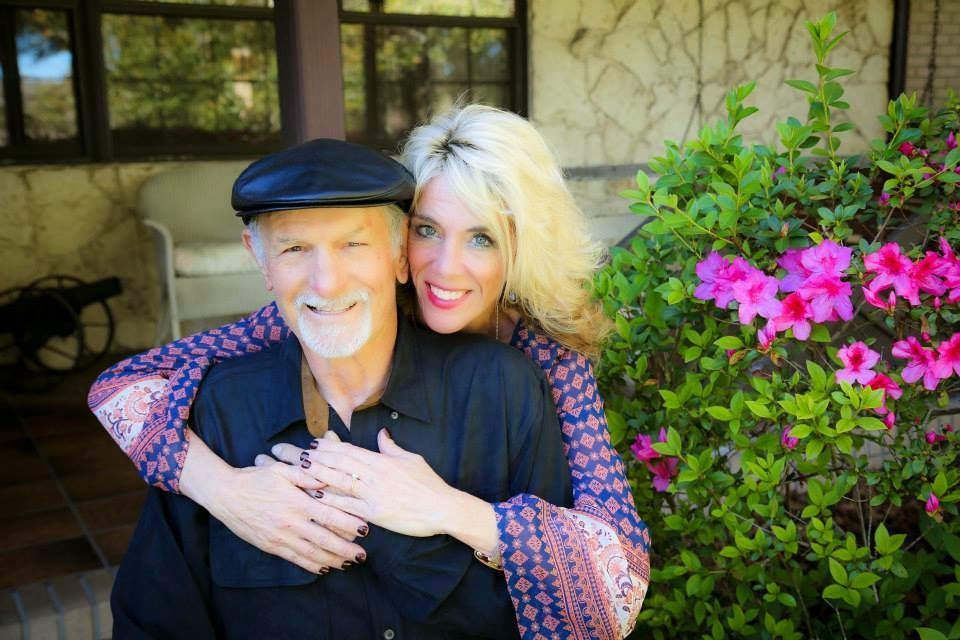 Didn't see this coming. But how many life-changing events are predictable? It seems like just yesterday that we were grieving the death of Don Garlits' wife and business partner of  60+ years, Pat. In fact, it's now been a year since Pat passed on. Don processed the loss by keeping busy as usual, but who knew he was keeping this busy? That's right, he grew a goatee! The Swamp Rat continues to catch us off-gaurd. The other person in the photo is fiance Lisa Crigar. The wedding is scheduled for July 25th . Yet another surprise news item from The Week That Was. (Photo courtesy of Don Garlits Museum of Drag Racing)