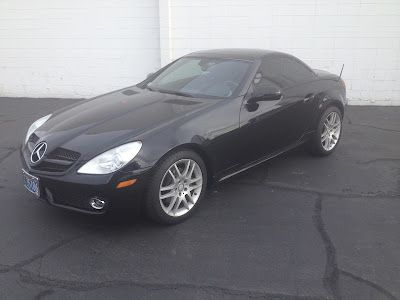 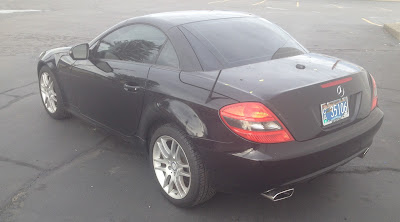 The people who live across the street from my girlfriend Shellski bought this 2009 Mercedes coupe a couple of years ago. I've been staring at it ever since. From my mouth-breather perspective, it's hard to know what to make of such a car. But it makes them happy, which is all that matters. 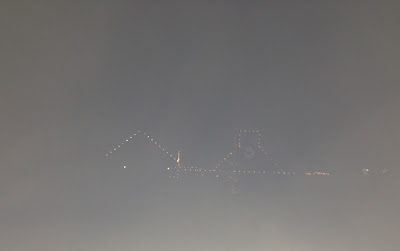 Their names are Sandy and Orlan, and we have all become close friends over the years. Prolific collectors, we teasingly refer to Sandy and Orlan's home as "The Museum". They had us over for a Thanksgiving dinner that couldn't be beat this year. This weekend, they hosted some kind of Christmas Museum Tour event (don't ask me) as a charity fundraiser. To make room for guests, the Mercedes' were parked in Shellski's driveway. I cracked wise about needing the keys "In case of emergency, you know", and they tossed 'em my way! It was a little foggy, so it's hard to make out the coupe and its matching M-B SUV sibling, but they're parked on the street in front of the museum, as always. The following is an atypical day in the life of this professional car tester... 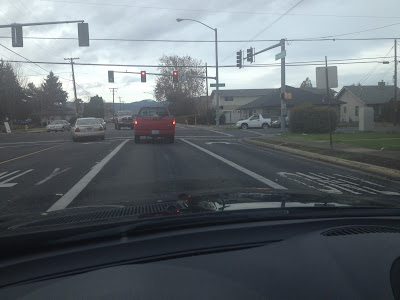 I needed to run to the hardware store, which is on the other side of town. I strapped in, cranked up, and was instantly transformed into a cyborg, at one with the Mercedes, while traversing to my favorite shopping emporium. Steering was quick, and suspension firm. Braking awesome, and tires gooey, even in rain! 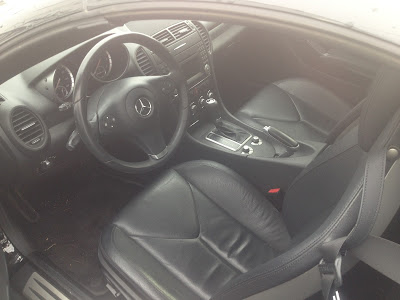 Sandy and Orlan get obvious demerits for the blasphemous automatic transmission, which does its best to numb the cyborg vibe. Boo! But this reviewer loved the cozy and comfy interior, despite constant warring with the pain-in-the-ass shoulder belt (apparently, one must prove themselves sadistic to qualify for a Daimler engineering gig). 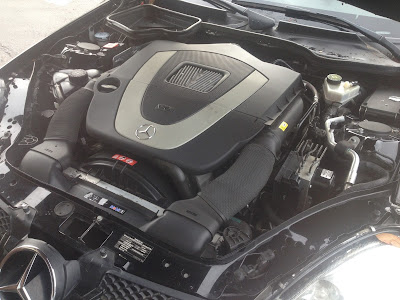 According to the badgery, this is a V-6 engine, but it looks more to me like someone slammed the hood on Darth Vader while he was installing a new radiator. 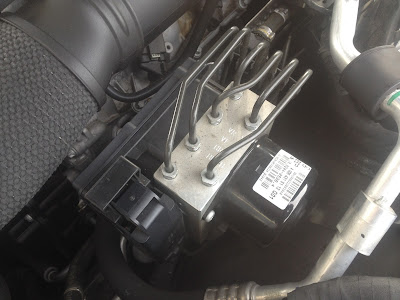 No idea what this is (EFI barrel valve?), but it features excellent line routing! Bravo! Correction: Motormouth Ray tells me this is an "ABS distribution block", whatever that means. 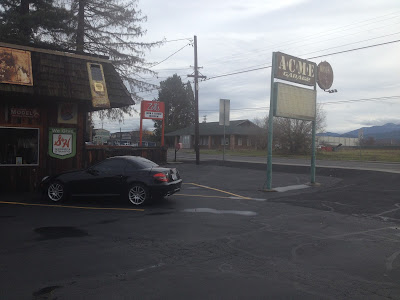 Okay, enough foreplay - let's get to it. Hyper-aware that I was driving someone else's car (that's worth more money than I could make if I live to be a thousand years old), I mostly tiptoe'd through traffic, and was a Nervous Nellie in parking lots. But I was grinning enough to make my jaw ache. Dig the factory's implied stance and rake. 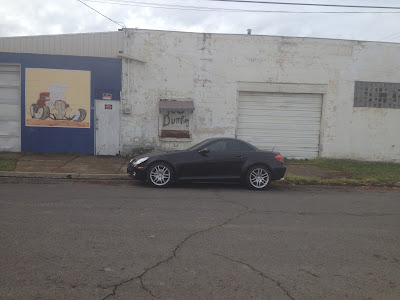 While in the neighborhood, I stopped to pay tribute to Chris Darland's old shop. It's probably been ten years since he moved out, and it remains untouched. This angle shows off M-B's stance trickery, using tall rolling stock to fill the wheelwells, while retaining ample ground clearance. This sleepy sidestreet is three or four blocks long - adequate for short term testing. The V-6 that felt annoyingly anemic around town, sprang to life with a hearty stomp of the throttle (Drive-by-Wire?). It didn't lay any rubber (Independent Rearend?) - just hooked and booked, kicking my ass hard into the rich Teutonic leather. My eyes must have been bulging, as I was really surprised by the torque. I dearly yearned for a full mile test, but thought better of it while savoring the last remains of Sandy and Orland's Thanksgiving gravy. (Note to self: Get a toothbrush) 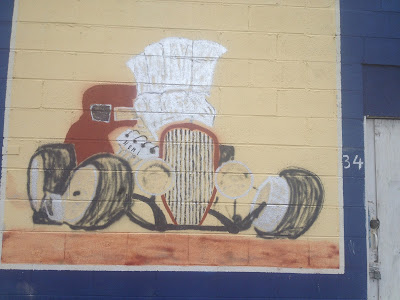 Not certain if Chris Darland is responsible for the wall tag, but I still smile every time I drive by. This is where I first met Darland - before he became a local legend and international curiosity. 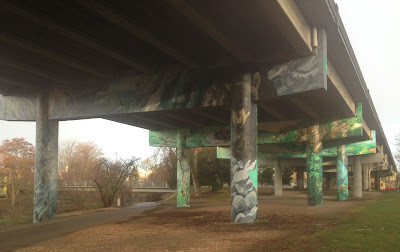 With The Merc now safely ensconced in the driveway, I resumed the day's scheduled activities, including a visit to our town's brand new dog park, which has already been savaged by taggers. Tsk, tsk. 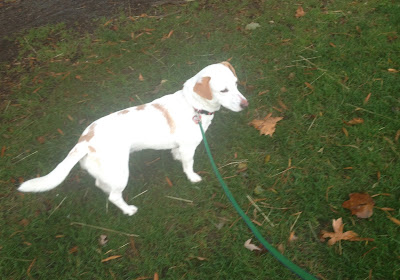 Shellski's dog Rosie McDunski ("Rosie" for short) joined me for the occasion. I sensed that she preferred the old funky dog park over this sterile foreign upstart. Time will tell. 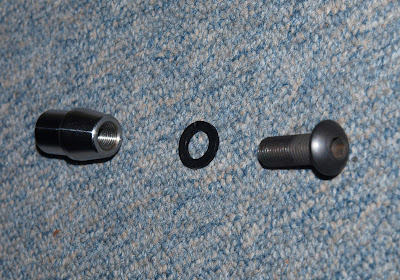 The washer that started it all: The SGE Model A sheetmetal will be hung via round tubing. This is the business end, which required nylon washers to protect what is certain to be an AMBR-winning paint job some day. So I simply HAD TO panic to the hardware store for a fistful of these seventeen-cent washers, immediately! I might want to actually hang that sheetmetal some day. 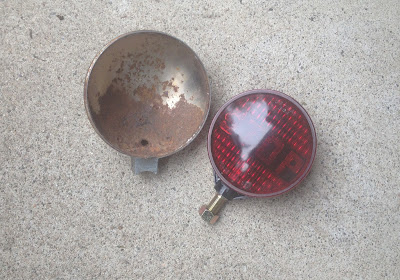 Yet another crucial Model A project, the restoration (and ensuing customization) of this ancient school bus stoplight (and matching Do-Ray housing) has been dragging on for months. This is the "Before" shot from last Saturday. It looks different today, but not any better. Please stand by for "After" shot. Just don't hold your breath. (Scotty cellphone shots) 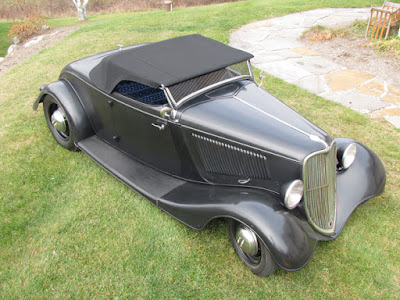 While I fastidiously craft my AMBR-winner, SGE northern New Jersey correspondent Lance Sorchik has been jangling right along on his late-model ('33) beater, but has yet to offer explanation for its lack of mileage, other than some veiled excuses: "The cast iron intake I had (300-horse 327) was warped, and leaking exhaust into the valley of the engine, where the heat ports for the carb were located. This was creating all kinds of issues. Also, it took five - count 'em, FIVE - distributor modules to come up with one good one! But the car is like a new vehicle now, and is running the best it ever has." 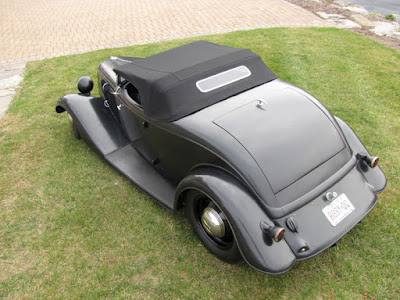 "Since the weather is so nice, I plan to get it on the road this weekend and put some miles on it before the snow flies. Hopefully, I can concentrate on some final details this winter, like the interior, and be set for driving next spring. Cross your fingers." The entire SGE Nation is crossing their fingers for you, Lance! Have fun, and send photos! (Photos courtesy of Lance or Diane Sorchik) 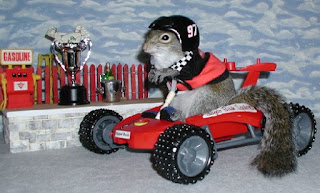 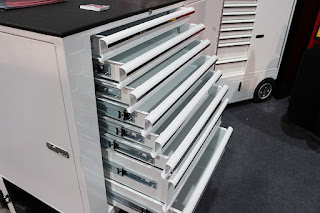 Ricky Sanders Racing is now pitching these aluminum rollaways at pitboxes.com. Gotta have one! Or more... Check 'em out! 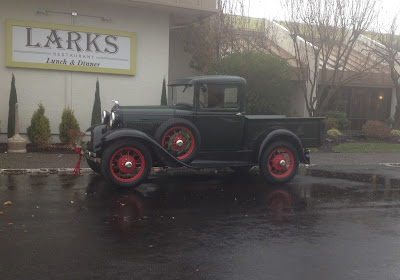 While doing my plant service route last week, I found this '31 pickup parked in front of a client's convention center. Once inside, I found myself at a regional meeting of the Model A Club of America (or something like that). During some chitchat, I let it slip that I'm doing a Model A, and the crowd embraced me with the warmth of a thousand Mother Teresas. We were back-slapping, wise-cracking, and smack-talking - until they asked for details of my build, and realized it was not a restoration. At that, I was soundly booed out of the very building I was being paid to service. And I was lucky to get out alive. I guess it still takes all kinds to make the world go around. (Scotty cellphone shot)