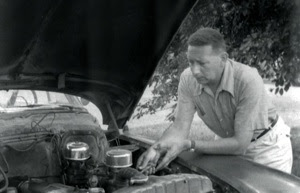 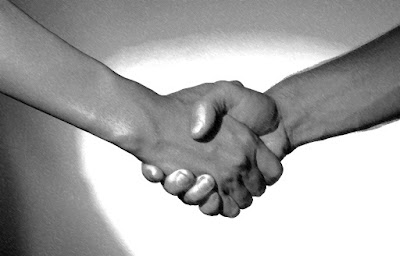 It only took twenty-five years for the connection made in 1990 to become fully realized. That's when I began corresponding with Henry Gregor Felsen. Overwhelmed by Henry's amazing gift for presenting the hot rodder's plight in an unbiased, non partisan, comprehensive, credible, and enthralling fashion, I felt unworthy of penning letters to him on my ruled dime-store notebook paper. Yet his typed responses (clacked out on the same typewriter used for all of his books and magazine pieces) were steadfastly supportive and encouraging. Henry inadvertently introduced me to his son Dan and daughter Holly via those letters. Holly and I eventually met, and the pieces gradually fell into place allowing for my visit last week to Henry's adopted hometown of Des Moines, Iowa.

The pretense was a concert performance and book signing at the 5th Annual Henry Gregor Felsen Tribute Car Show in Des Moines' historical inner borough of Valley Junction. And my brother Wayne (AKA Rocky) even drove over from Omaha for some overdue brotherly bonding. That much went off as planned. But as fun as it was, the car show was overshadowed by the connections made with Friends of Felsen from all walks of life and locales from Indy to Utah. As always, those events were completely spontaneous. Best of all was spending a week in Holly and husband Mike Welch's house, as a revolving cast of intriguing characters (mostly Felsens) came and went, mere blocks from the old Felsen home, where my favorite books were conceived. Full circle, indeed. 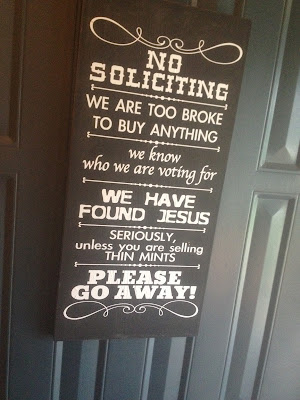 The warm fuzzy welcome to the House of Felsen. I instantly knew I was home. (Scotty cellphone shot) 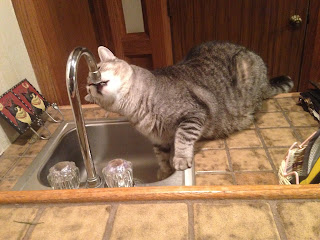 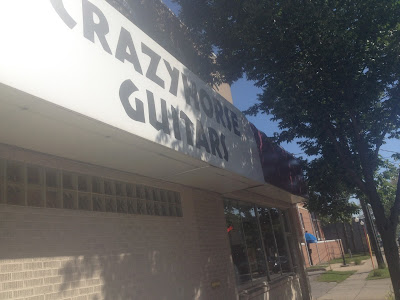 The day before the show, we stopped in at Crazy Horse Guitars in Des Moines, where proprietor "Hippie John" (who drives a warmed up Corvette) had selected a loaner guitar for me to use. Bonus: It was built by Breedlove Guitars in Bend, Oregon. And it was a total badass, even outperforming my trusty old Martin D-28 by a good margin. Thanks again, John! (Scotty cellphone shot) 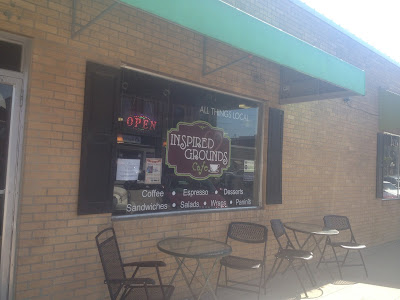 The concert venue was a large coffee shop in Valley Junction, an old part of Des Moines. Thanks to Mr. and Ms. Chad (salt-of-the-earth people) who run the joint, we were made to feel right at home and had our run of the place. (Scotty cellphone shot) 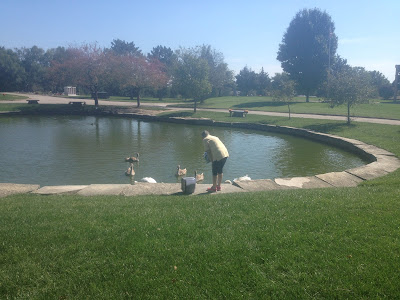 Holly has adopted a herd of swans at the neighborhood cemetery. We stopped by to feed them twice a day. (Scotty cellphone shot) 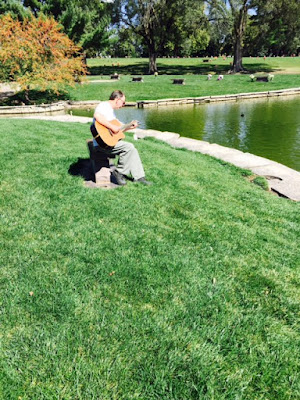 It turns out that swans are music fans. Not exactly groupies (the mother swan perceived me as a threat), but they are drawn to it. They have tiny louvers on their temples that open up when they're listening. Who knew? I'm testing the swans' sensory system response abilities here. They all tested positive (except for the testy mother swan). (Photo courtesy of Holly Felsen Welch) 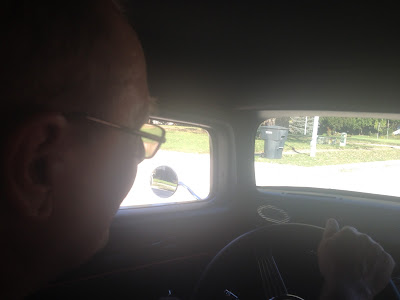 Holly's '32 3-window build still had a few issues to work out, so my brother Rocky and I did what we could. We're test driving here, following some steering, brake, and carb adjustments. (Scotty cellphone shot) 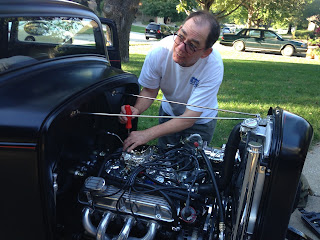 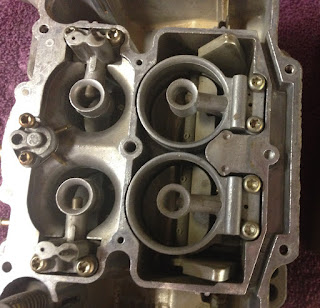 Edelbrock's take on GM's Q-jet is similar, but different. We figured it out on a pilfered bathroom towel in the driveway, much to the neighbors' amusement. Don't tell Holly! (Photo courtesy of Rocky Gosson) 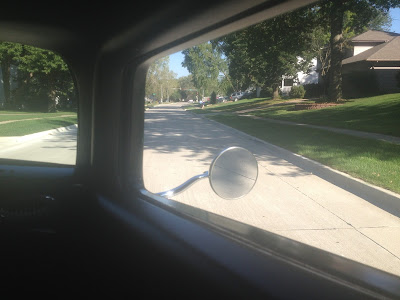 Test Drive # 4: Happily sideways, after removing a gob of Edelbrock "Endurashine" from the needle-and-seat of the carb. The fake chrome coating apparently turns to goo when exposed to gasoline (specifically, 15% alky 87 octane cat pee. The ethanol is our primary suspect. More testing will be required). (Scotty cellphone shot) 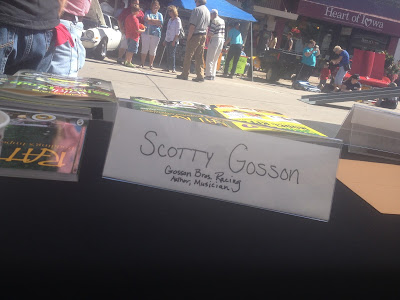 Most of show day was spent hanging at the booth with Holly and Midwest circle track legend Bob Trostle. We sold and signed a lot of books, and shared a bunch of laughs with friends old and new. (Scotty cellphone shot) 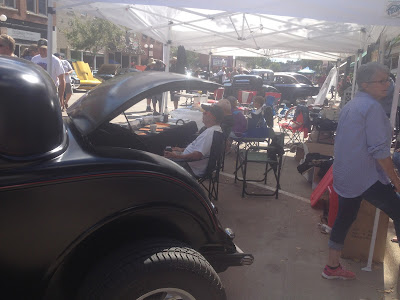 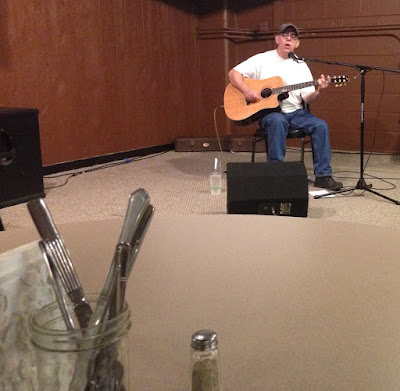 Since we couldn't afford to ship the entire band to Iowa, Karl Performance settled on flying me out to the Inspired Grounds Coffee Shop for an acoustic solo concert of new songs, destined for a future Scotty Gosson Combo album. The crowd was warm, attentive, and receptive. Folksinger Scotty was struggling with stage fright, but managed to survive the set until the rod-tossing finale. Note closed eyes: Playing Felsen-inspired songs in his old playground was daunting enough. Seeing my brother (who raised me) in the front row was reassuring and unnerving, all at the same time. At least we got a decent recording of the set. Bonus: SGE faves Tim Jones and Beth Main showed for the show (minus their blown flathead Comp Coupe). (Photo courtesy of Rocky Gosson) 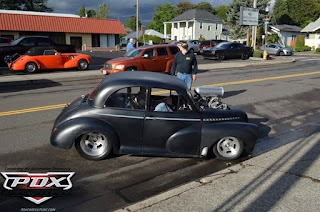 SGE Portland correspondent CC has blown the spiders out of my old Morris and has been making the rounds of the Rose City's social scene in recent weeks. He's tiptoeing into a Gresham hot rod gathering here. (Photo courtesy of PDX Car Culture.com) 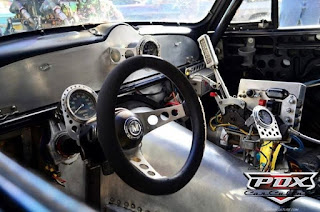 Amazingly, CC has left the car just as he received it, probably ten years ago. Nothing new in here...(Photo courtesy of PDX Car Culture.com) 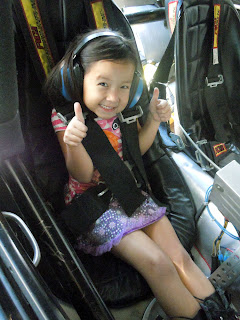 ... except for daughter Celina, who rides shotgun sometimes. (Photo courtesy of CC) 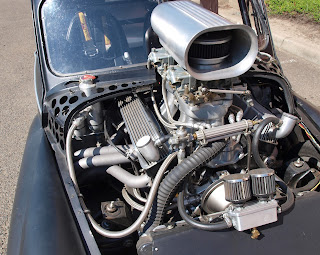 Nuthin' new here, either, other than some fresh oil and plugs. (Scotty shot) 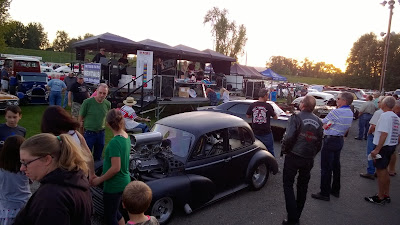 Last Wednesday night at the Portland International Raceway drag strip. CC blasted it there on street tires and did not make a pass. (Photo courtesy of CC) 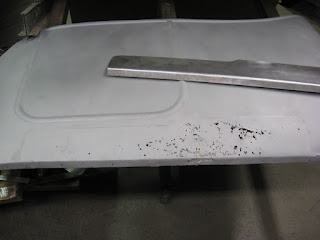 "I got the body panels back from the sandblaster, and it's real solid (especially for being 90 years old), but for a section of rust in the lower left-hand side. I formed a patch panel using an English wheel, sheetmetal brake, and a shrinker." 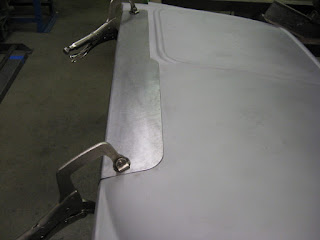 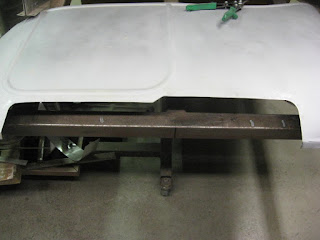 "I scribed around the affected area, and removed the rusty section with a cutoff wheel and some tin snips." 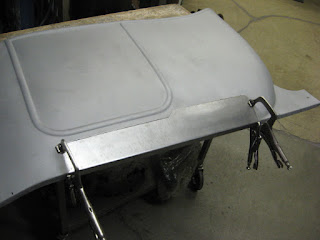 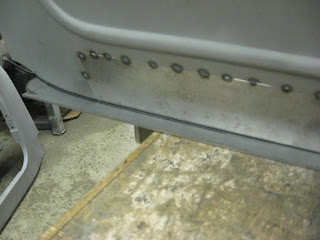 "It's only tacked in place, until a friend drops by to hammer it as I weld inch-long beads with the TIG welder. The next chore is to fab a panel to blank out the right-hand door, as that's how the original car was done." Is it just us, or is this car coming together even faster than the SGE Model A project? (Photos courtesy of Marty Strode) 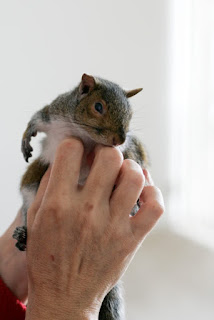 Holly Felsen Welch's back yard is crawling with squirrels. Husband Mike obediently feeds them twice a day. This guy is named Henry. He does look scholarly. (Photo courtesy of Holly Felsen Welch) 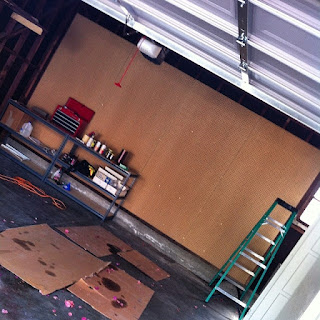 Lowbrow artist Chris Cooper ("Coop") may have possessed the world's most spartan garage when this was shot, though it was already christened with Model A spots and sported a 4-drawer box, some chemicals, and a ladder. The Felsen/Welch garage is jammed to the rafters, yet contains nary a single tool. Now you know! (Photo courtesy of Coop) 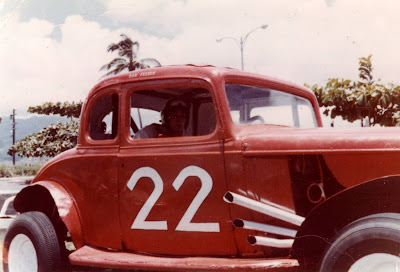 Henry Felsen's son, Dan - a retired Des Moines police officer - came out from Salt Lake City for last week's festivities. While serving in the Marines in the early '60s, Dan ran this flathead Ford-powered '34 Chevy coupe on Hawaiian dirt tracks. He still has the fever today - maybe worse than ever. Out of frame: A polished Model A radiator shell. (Photo courtesy of Dan Felsen) 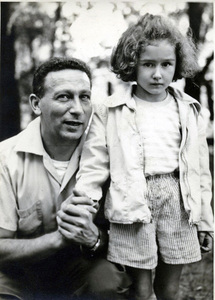 Henry and Holly, already surfing a wave of momentum in the 1950's. (Photo courtesy of Holly Felsen Welch collection) 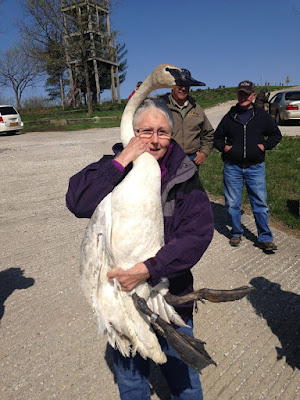 The Crazy Swan Lady of Des Moines, with one of her rescues. God bless you, Holly. And thanks for everything. Last week was a nice test run for the 2016 Henry Gregor Felsen Tribute Car Show. That will be Henry's 100th birthday party, and Valley Junction is gonna rock like it's 1916!

Special thanks to the crew at Karl Performance for sending the company jet to chauffeur me around the U.S. last week. It's one badass machine. These guys race everything from Pro Mods to dirt trackers. They win a lot. Thanks, Carl (Moyer), and all the Karls at the shop!