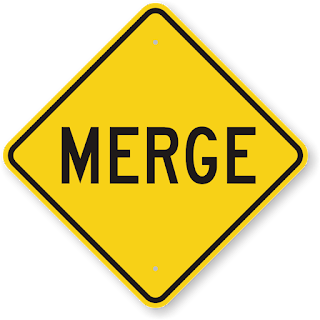 It's time to merge with the herd. I'm trying. I really am. If it happens, it'll be a slow process.

Last week at the dentist, I found a year-old copy of Autoweek in the waiting room. It featured a nice profile on Jim Marshall's photography of famous rock stars and their cars. After reading (and enjoying) the feature, I browsed the magazine and realized it was a special edition, bought and paid for by Chrysler Corporation to showcase their 2014 performance car lineup. Other than the Marshall piece, it was one big Chrysler advertisement. I winced, but lightly scanned over the effusive cup holder and electronics praises before tossing the thing in the trash (you're welcome, fellow dental pain sufferers). It turned out to be a sign.

While I can't be bought as easily as the Autoweek staff, I can be rented. In the midst of last week's juggling act, one more ball was tossed into the mix when I received a Mayday call from San Francisco. My girlfriend Shellski had brought her dog Rosie to the Bay Area with her, and the move we both believed would simplify the logistics of the trip backfired. Shellski was dealing with life-and-death family issues, and Rosie had become a liability. So I was drafted to bring the dog back home to Oregon.

As usual, I was as broke as an author can get, so Shellski had to pay for a rental car (as my beater is not to be trusted past its five mile fuse). Thus was presented my initiation into the car rental experience. The first day designated for the trip was spent crawling through a labyrinth of financial and insurance regulations, and passed without progress. Thanks to an assist from our pal Nurse Newman, the red tape was finally overcome on Day Two. I hit I-5 Southbound at the crack of 11:00 AM in a 2013 Chrysler 200 4-door sedan. By far, the newest car I've ever driven. 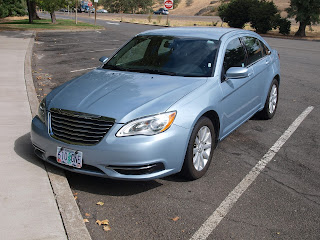 My first rental car deserves my first car review, so here we go. This reviewer finds the 200's styling to be wretchingly pedestrian, but for the ghastly grille, obviously sketched up by a former Gillette employee. A previous renter must have slammed it hard into a curb, as the left front shook like a hula girl in an earthquake from 60 to 77 MPH. I hit the first rest area on I-5 to check it out, then decided the violence was the only interesting aspect of the car, plus I was curious to learn how far it could go like that. I never once had to stir my coffee. 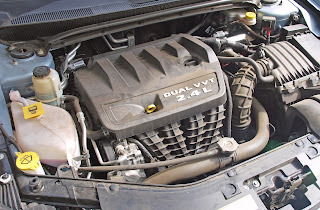 Popping the hood exposed this lump of plastic, boasting two VVT's. I guess that's twice as good as just one. It also has almost two and a half  L's. I'm now assuming this is the engine, though I first thought it to be an air conditioner. The carb, mag, and headers were completely hidden, which is pretty slick. That plastic head must be half the weight of an aluminum one! Kudos to Mopar for that. 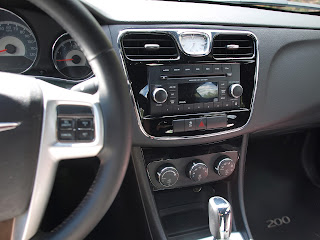 We car reviewers love to drone on about interiors. I like the clock. One must assume the shifter controls a Torqueflight, but the converter is way too tight on this thing for anything but freeway flight. I figured out the cruise control okay, but rarely found enough open road to enjoy it. It had stereo cup holders. The radio worked good. No cassette or even an eight track player though. Oh, the seats were comfy. As with the engine compartment, all interior rollcage tubing was cleverly hidden from view. Pretty impressive work, that. 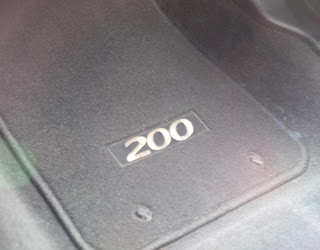 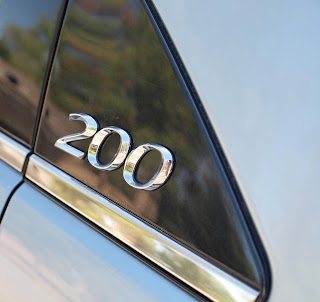 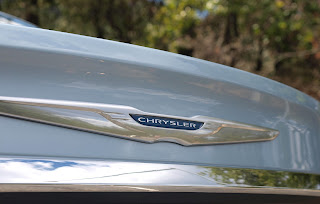 Initially refreshing, retro-deco styling now annoys me. I found this decklid badge and the clock to be marginally acceptable, if only because they break up the endless expanses of lame predictability. 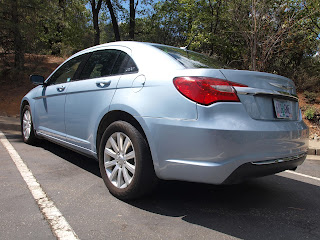 I photographed this vehicle at every rest stop and failed to find its good side, or even an unawkward angle. Worst styling fail ever. And the details: Like everything from tennis shoes to reading lamps, must every modern object emulate a spaceship? Unnecessary head and tail light swoops are typical red flags. Has Trendy ever magically morphed into Timeless? Why polish a turd? Does Chrysler not have enough of a budget to start over when something isn't working? Um, they must have noticed this wasn't working, right? 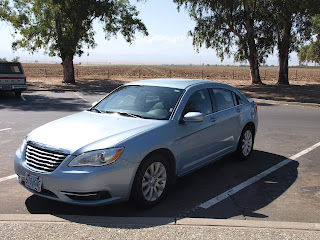 I've always believed cars look their best at speed, and/or when shot from overhead. Sure enough, after scaling a trash can before stunned tourists, this is the least offensive angle of the 200. And it's still awful. The Ford pickup pulled in just as I clicked the shutter. Doh!

Ah, much better without the car. An action shot of California's majestic Central Valley (complete with dust-blowing tractor, which looks twice as good as the 200). 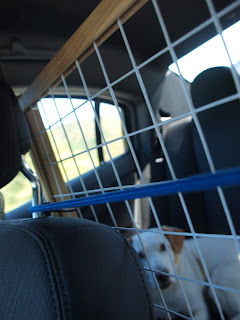 The return trip. Meet Rosie. She found the 200 to be luxuriously plush, quiet, and supple, even while wheezing up I-5 at 80 MPH with one wheel flopping. While I nervously anticipated the driveshaft's inevitable spearing of the trans tunnel, Rosie dozed for the entire six hour run and awoke absolutely refreshed. BONUS: I took this shot over my shoulder at speed, certain that it would be a blurred mess. Happy surprise! 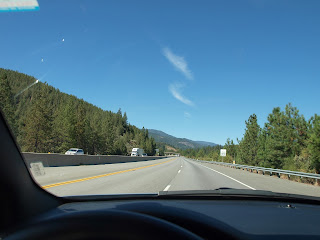 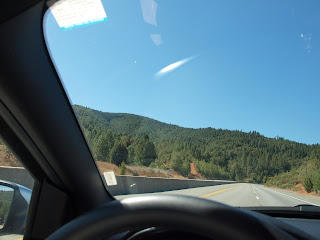 Strange sights in the California sky. Media gripe #37,986: Does a meteor crashing into the city beyond the hills really need an exclamation point over it to make it dramatic? Great freeway shot I didn't get: A new black Corvette, tiptoeing back from Willows Raceway while stuck in first gear. It was doing about 25 MPH at an estimated 6,000 RPM with a long line of traffic behind it. I passed it three times that day. So the 200 can be considered a Corvette slayer. Why the snarky attitude regarding the 200? Because the snootier the review, the more credibility people read into it (a trick I learned from Mick LaSalle). In reality, I couldn't care less. I'm just happy to have Rosie back home. (Scotty shots) 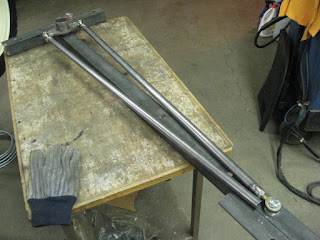 Follow along kids, as Marty fabs a brand new set of hairpin radius rods, the Spalding way. Things are simple enough at the starting line, but how to blend the two tubes tastefully together? Rather than reinvent the wheel, Marty left the cute stuff on the table and followed the Spalding's beads. 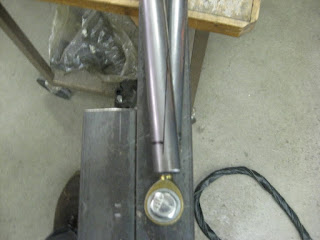 Eyeballing the intersection. Look both ways before crossing that line... 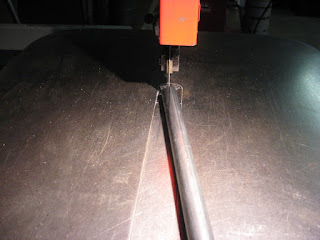 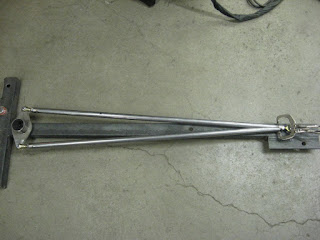 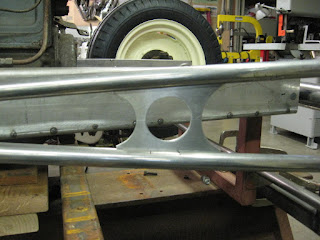 Add snappy gusset. Weld and grind to taste. Repeat. Marty already has a good start on the rails. Tune in next week to see a rolling chassis in action. Or maybe not. It'll be a surprise. (Photos courtesy of Marty Strode) 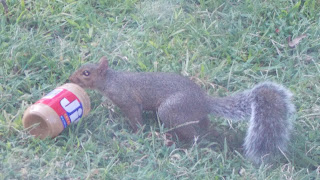 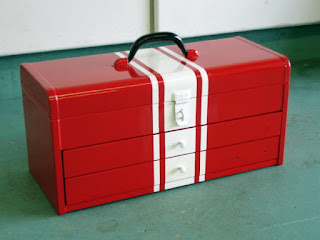 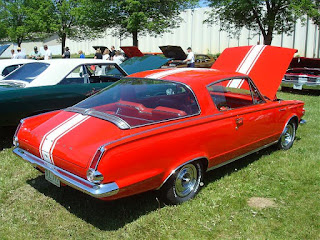 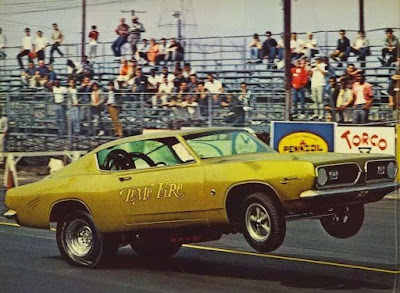 Full disclosure: The author's point of reference for design and styling. As always, consider the source.

Posted by Scotty Gosson at 5:22 PM No comments: