INSIDE LOOKING OUT AT WEEKENDO GRANDE 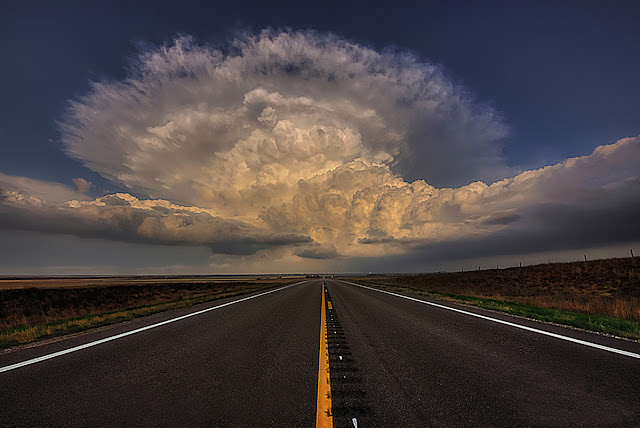 The road to anywhere. This happens to be Kansas. Set your funometer on 10 and aim for adventure. Take photos! (Photographer unknown) 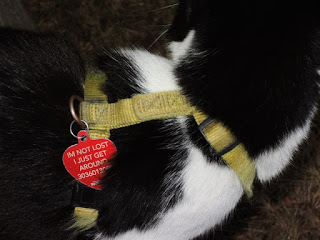 
Everybody's going everywhere. That's the view from here, anyway. Summer seems to be getting beaten into the asphalt by everyone but me, as I hunker in the bunker and attempt to herd the feral cats that are the loose ends of my latest book project. I work alone, but am constantly barraged with reports of fantastic road opuses from friends and strangers alike. Several have invited me to join them, but I'm grounded. If you can't beat 'em or join 'em, exposed 'em and grin along, right? Might as well. Can't go to Speed Week. Again. 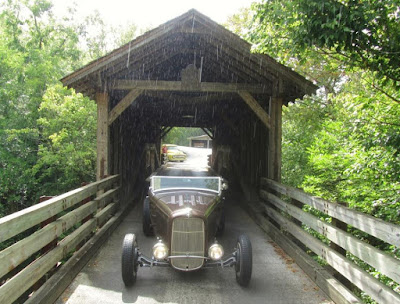 Ron Hickman waits out some rain on his way home from somewhere. Ron is so hardcore, he waits outside the covered bridge. (Photo courtesy of Ron Hickman) 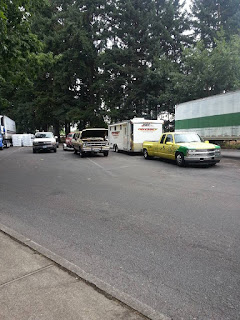 My pal P-Dub and friends, heading south from an I-5 rest area for the Hot Rod Nationals race at Woodburn Drag Strip in Oregon. (Photo courtesy of Paul Warner) 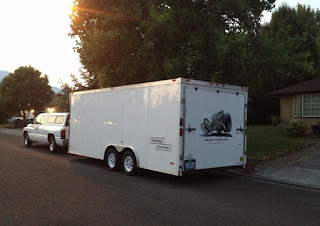 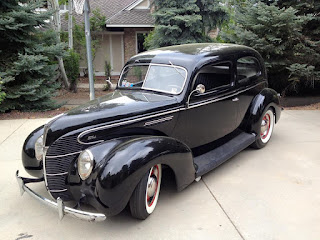 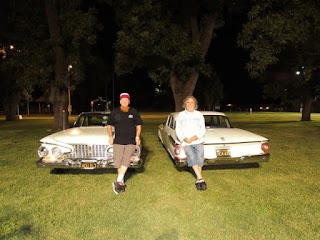 The only two humans outside of Cuba to still drive '61 Furys. Scott Edwards (left) and David Wallace Jr. met by chance in California, posed for a photo, and went their separate ways. Edwards' whereabouts are a mystery, but Wallace hightailed it to a folk festival in Colorado. (Photo courtesy of Dave Wallace Jr.) 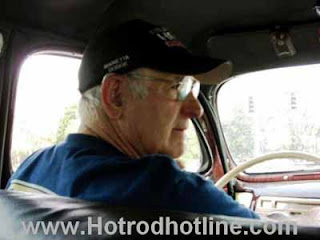 This guy has spent a lot more of his life on the road than hanging around the house. Don Garlits set out on one of his most ambitious adventures ever this weekend. He would need oars to get there.(Photo courtesy of Hotrodhotline.com) 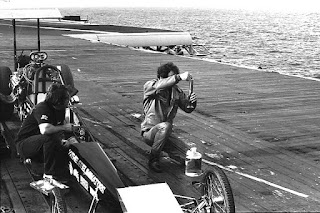 Good guess, but no, this isn't Big Daddy's recent road trip. Just an example of how he likes to travel. Donald enjoys long walks on the deck, and mixing nitro in his spare time. (Photo courtesy of Garlits Museum of Drag Racing)

If getting there is the best part of any event, being there has to be a close second. 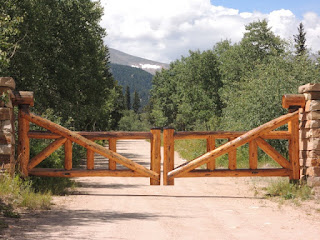 Dave Wallace and partner Donna left the Fury at home, swapped it for their Ford van, then swapped the van for their Chevy Tahoe (long story) and ended up here at Caribou Ranch in Colorado. (Photo courtesy of Dave Wallace Jr.) 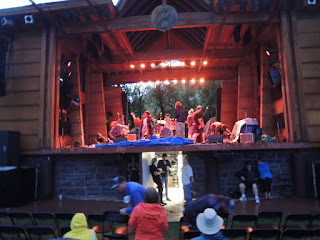 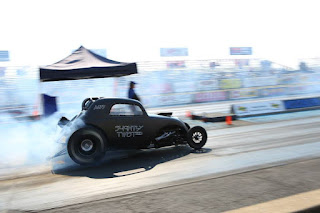 Twisty Ron Austin went to the final at Woodburn, but came home without a trophy. No complaints though. (Photo courtesy of Jeff Tarr) 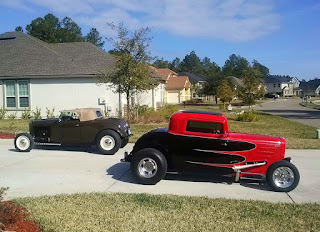 Ron Hickman made it home, safe and semi-dry. His coupe gathers dust while the roadster takes a snooze. Ron's probably in the house, snoring in front of the TV. (Photo courtesy of Ron Hickman) 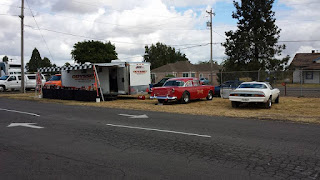 Dan Dolan made it to the Hot Rod Hill Climb, as far as I know. This is Checkpoint 3. You can tell by the sign. I researched this carefully. Mike Nicholas put on yet another stellar event in Georgetown.(Photo courtesy of hotrodhillclimb.com) 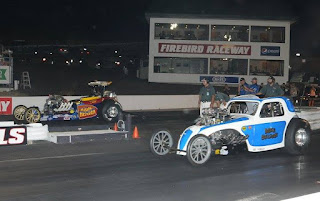 Did I mention the Firebird Nightfire Nats took place this weekend in Boise, Idaho? Jeremy Sullivan vs Shawn Callen swat it out here in the Fuel Altered class. SGE fave Adam Sorokin went to the semis in Top Fuel, following a nightmarish series of screwups that turned his two hour flight from California into an enduro event. Some guy named T-Bone from New York won the Top Fuel final. Go figure. They had Funny Cars, too. (Photo courtesy of Firebird Raceway) 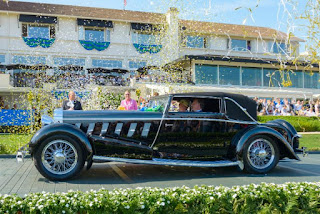 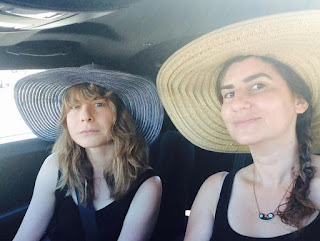 Remember when my brother Rocky and I donned derby hats and crashed the Pebble Beach hog wrassle a few years back? What a classic. Elana Scherr and her loyal assistant (Laurie Bird?) did the same this weekend, but they may have been on the clock for Hot Rod Magazine. (Photo courtesy of Elana Scherr) 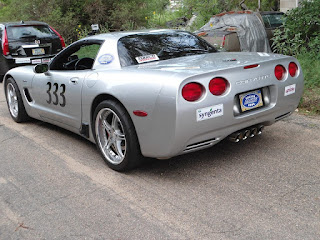 Oh yeah, my nephew Jerm took his 180 MPH Corvette on the four hour flight from Omaha to the Sandhills Challenge in Arnold, Nebraska this weekend. Jerm and my brother Rocky ran the Saturday events, drove it back to Omaha, attended Jerm's son Tony's pre-school graduation on Sunday morning, then drove back to Arnold for the Sunday doings. No report yet on how they did, so we're running this shot from 2012, when I was there. Someday when you're older, I'll tell you about the cars in the background. (Photo courtesy of Jeremy Gosson)

So where was Garlits headed to this weekend? The Goodwood Festival of Speed, in England, of course. Big Daddy brought Swamp Rat 1B (the blown version) over for a display of rowdy Americana. An initial burnout in Lord March's driveway tossed a blower belt, which collapsed a valvespring, sending an intake valve through a piston. The Lord and his minions demanded more than an aborted half-burnout, so Garlits got busy with the business of being Don Garlits. 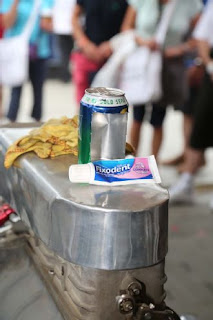 Big Daddy's tools of the trade: Sprite and Fixodent. Made in the USA. 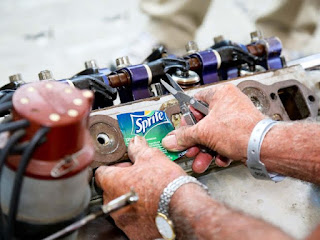 With the #5 lifters and pushrods removed, this tin patch seals off the intake port. 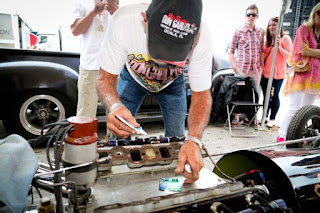 Fixodent: A little dab'll do ya. As the name implies, it makes a good bodywork filler, too. 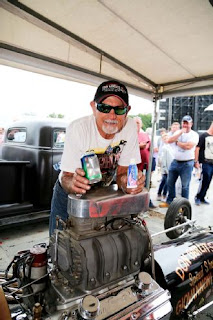 Yankee ingenuity to the rescue. 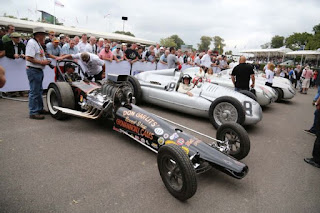 All buttoned up for some seven cylinder nitro action. Let's see what happens. 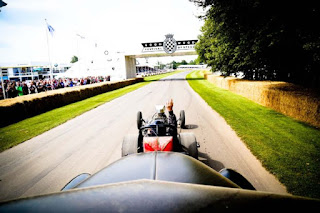 The first thing that happened was the push truck wouldn't start. After some panicky scrambling by fiancee Lisa, they were underway. 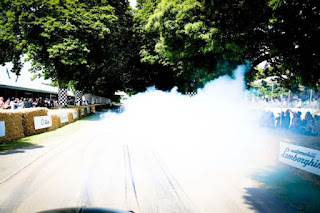 Success! The crowd ate it up, and Lord March was smiling... 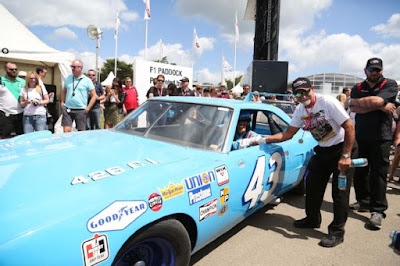 ... then Garlits got back to schmoozing with royalty. All in a day's work. Me want go there. (Photos courtesy of Goodwood Festival of Speed) 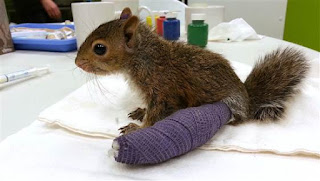 We patch things up when they break and keep moving as best we can. If we must wait to heal, we savor the downtime and learn from it. It's all good. 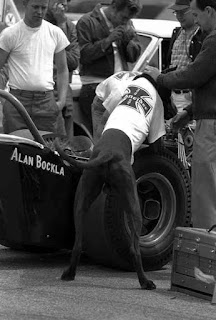 When we're back on our feet, we make up for lost time by giving 100%. To the right is Alan Bockla's Kennedy box, just big enough to hold a can of Sprite and a tube of Fixodent. 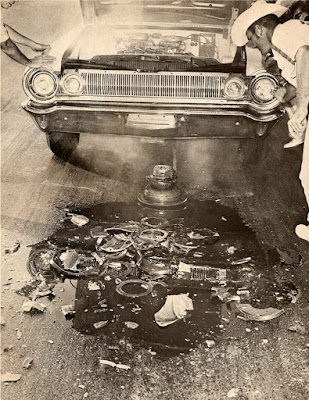 Okay, this is gonna require a second tube of Fixodent. And a fire hose. How was YOUR weekend?