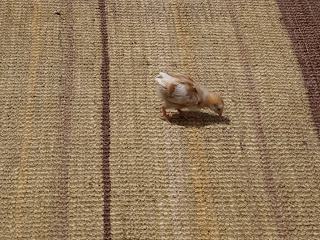 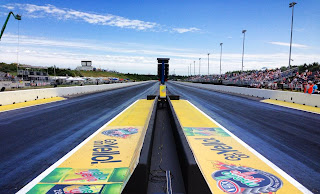 New England Dragway, last Thursday. Already sold out, this was the calm before the calamity. It rained, the track was narrow and bumpy, pits were overcrowded, there wasn't enough seating, and both port-a-potty and food/drink vendors ran low on supplies. More of this, please!
(Photo courtesy of Brian Lohnes)

June 21st marked the Summer Solstice. Action figures are now officially in season. Overcammed exhaust notes and protesting tire chirps are echoing through the downtown area every night. Creaky racetrack gates have swung open, nationwide. In fact, last weekend, I even got a rare opportunity to watch the NHRA Big Show on TV. Despite the producers' best efforts, I glimpsed vast sections of vacant grandstands in the background. I sighed and switched over to Facebook, where I read a notice that Brian Lohnes (see his interview on this blog) would be the track announcer at the inaugural New England Nationals this weekend in Epping, New Hampshire. From the opening day of qualifying, reports began trickling in of a different kind of  national event - this one had teeth. Rabid New England drag fans made a statement of gratitude by supporting the event in a big way. The buzz was highly contagious and by Thursday night, the freeway clogged to a halt. From Friday through Sunday, fans covered surrounding hills and reports of indigenous railbirds displaced to trees and even phone poles were multiplying. The fever was not lost on the racers, who responded in kind with outstanding performances in every class. It was the most compelling Big Show I'd seen in many years, complete with an inspired and spirited race! I hope someone at NHRA was paying attention. 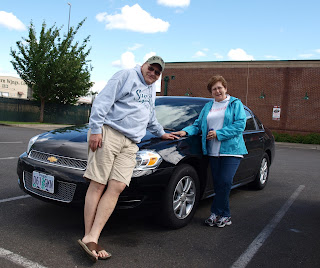 Mike Welch and Holly Felsen Welch, torture testing the 2013 Chevy Whatzit on the I-5 corridor. "The dash looks like it was stolen from the space shuttle. But the V-6 has some gow". So far, so good.

On Thursday, I got a call from Holly Felsen Welch (see her interview on this blog). Holly and husband Mike had flown from their Iowa home to Portland, Oregon for a wedding, but were willing to drive their rental car down to Roseburg (our halfway point) to meet me for lunch! I Honda'd up to Roseburg and finally met them in person for the first time. What a great pair of humans! This is another of the amazing connections that have been gifted to me, tax free. Holly's dad Henry and I began a correspondence in 1985 by pen and typewriter, and he encouraged my writing until his death in 1995. Fourteen years after that, Holly made her surprise appearance in my life. We now routinely compare notes on publishing, writing, and the finer points of building early Ford roadsters (Holly has a beautiful black '32 highboy). We caught up on each other's highs and lows over a leisure lunch, then Holly and Mike blasted off for the Oregon coast, in search of whales. And I floated back to the SGE complex on a warm pink cloud of gratitude for the relationships I've staggered into. 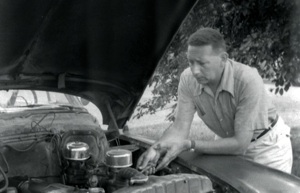 Holly took this photo of dad Henry Gregor Felsen pondering his next move in tuning the 216" 6-cylinder in his '50 Chevy.  He souped the engine (dual carbs!) and repainted the body (gold metallic), as research for his Boy Gets Car book, which he dedicated to Holly. (Photo courtesy of Holly Felsen Welch) 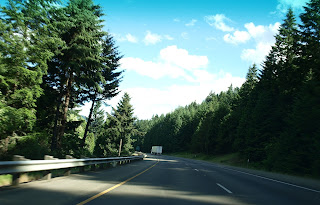 Cutting through southern Oregon via I-5 in my first "reasonable car", a 1998 Honda Civic. That can't be right. What's happening to me?

Back at the luxurious SGE offices, I reflected on this spring's events. Thanks to the input of a plethora of very loving and inspiring people, several projects are now approaching closure. The first Gosson Bros Racing Library book ("Racing to America") is finished and ready to print (just need to finance printing); The first GBRL music CD is also finished and ready to mass produce (just need to finance burning copies and printing covers); Hot Rod Deluxe magazine coverage of this summer's events is now decided on and locked in (just need to finance travel costs); Meanwhile, three more GBRL books are finished and patiently waiting their turn to print, while new projects continue to roll in. Several outside contributors (all familiar names) have approached GBRL with promising projects of their own, for consideration. The budget crunch is the only negative in the mix, but has prompted me to consider major changes to my business and personal life in the immediate future. Stay tuned. The silver platter is heaped with promise and could tip either way at this point... 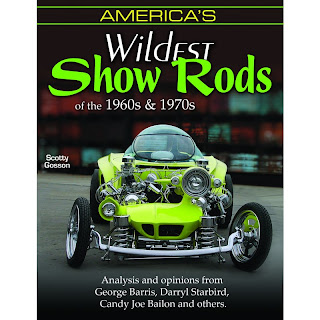 Alas, all was not unicorns and rainbows on the 21st. Summer Solstice is a dark day for blingsters, as the indoor car show season expired. But don't despair - help has arrived in the form of America's Wildest Show Rods, now on the shelf at your favorite bookstore and at Amazon.com! More on this momentous occasion, next week. Until then, memorize this cover image and ask for it at the checkout counter. It's a once-in-a-lifetime car show that will last until the paper disintegrates. (Photo courtesy of CarTech Inc.)

This guy has probably been interviewed on this blog. I just can't keep track anymore. (Photo courtesy of Rooster Cogburn)
Posted by Scotty Gosson at 10:19 PM No comments: