Here's a piece from about six years ago, concerning a couple of characters in my little racer's peer group. Their situation is unique and so are their cars - cleanly executed examples of period lowbuck funnery. I try to write stories that I'd be excited to discover when turning the page and that may be my downfall - my tastes are just so out of touch with today's marketplace that I'm now amassing a collection of unsold tales.
Lesson to aspiring writers: Despite these rejections, I'm still making a go of it, plus I sleep well, knowing I did my best, on a topic I'm passionate about. Luckily for me, I don't buy into success/failure, only 'what is', at the moment. In my case, that means living my dream of writing about the life I love.
The numbers in this story are outdated and I've lost touch with the Lindsays over the last few months (we're all busy). But after reading their story, you might agree that the numbers are the least important aspect here...
IN STEREO
Prioroity Dynamics explained by the Lindsay Bros.
By Scotty Gosson 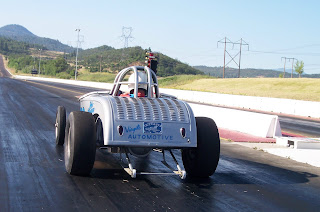 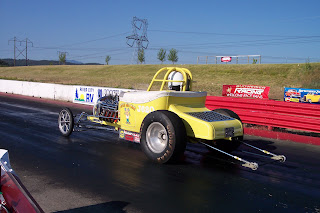 Bob and Jim Lindsay have transcended brotherhood. The Lindsays are in synch. In stereo. And they’re not alone. The brothers from rural Shedd, Oregon are part of an amazing community of ex-drag racers who retired to the quiet fields of Oregon’s Willamette Valley to let the ringing in their ears slowly dissipate while getting back some perspective on the big picture. Getting your hands into the soil can really help one refocus on priorities. And sure enough, all of the regulars at the tiny Shedd Cafe have come to the same conclusion about drag racing: it can chew you up and spit you out without giving a damn about you or anyone else the addiction affects. Brutal stuff.
Most customers at the Shedd Cafe (the social vortex of the local population) pull up to the building in street cars they built during long rainy spells - mostly traditional pre-'48 hot rods, with a few tasty 50's cars parked around the perimeter of the lot. But the Lindsays are part of a small group who also stepped carefully back onto the 1320 with priorities intact, after a long healing period. This time around, the bottom line is amusing themselves with creating and racing their vision of how it should be. According to Jim and Bob, it should be fun, clean, fun, fast, fun, low buck, fun, unique, fun, safe, fun, period correct as possible, and uh, fun...And consequently, the Lindsay Bros always have great stories to tell at the Cafe on Monday morning - stories told with a wink and a grin and that understated farmers chuckle. True stories. In stereo...
Jim Lindsay's '23 T roadster 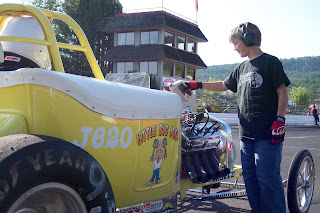 Jim's vision of what a drag car should be was based on the golden rule of hot rodding: Power to weight ratio. Big news in a small envelope. The fiberglass Speedway body shell weighs little more than a stack of nine second E.T. slips and the homebuilt 2"X3" mild steel frame (100" wheelbase) and chrome moly rollcage do their jobs without adding any excess poundage. Jim gets extra style points for choosing the '34 Ford front suspension (using F-1 shock mounts), 17" American 12-spokes up front and first generation Halibrand mags out back. "Thunderbird Goldenrod Yellow" paint by Fred Maxwell and chrome by Oregon Plating (in Portland) just enhance the visual impact when the "Little Big Man" pulls up to the starting line.
Jim's pals, Justin and Adam Brenneman at B&B Speed Shop in Albany, Oregon whipped up the early Hemi, backed by a Powerglide trans, feeding torque into a 9" Ford rearend packing 4.11 gears. Actually, the little T has seen a few B&B Hemis pass through its engine bay over the years: for eight years, it was a 241" Dodge Red Ram with four Strombergs on alky, running in the low 11 second range, then came a 291" DeSoto (with 330" crank and rods), pulling the car into the 9.60 zone. These days, Jim runs a '56 DeSoto 345 incher, using that Hilborn injector to spray the alcohol into stock heads, where it's squeezed by Wiseco pistons to the tune of 11.78-1 compression. A Chris Nelson (Farmington, Utah) flat tappet cam tickles a mostly stock valvetrain and remnants are removed via B&B headers. As of this writing, the new combo has run a best of 9.29@140mph, and there's still more in it, according to Jim and the B&B gang. The Little Big Man has been in the thick of the action at dragstrips up and down the west coast and shows no sign of getting tired yet. Jim says he's having a blast and he grins all the way down the track on every pass. How could he NOT??? 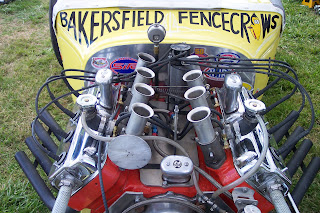 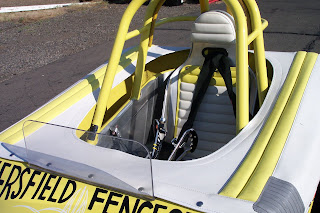 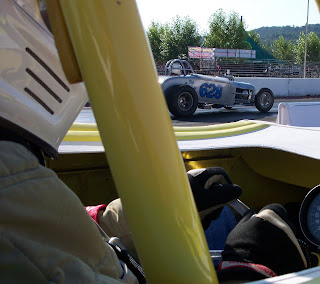 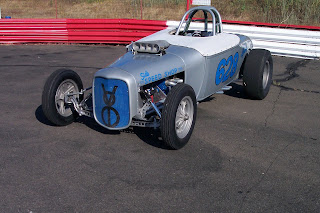 Bob knows what he likes and when it comes to powertrain choice, he's sticking with what's been working for him from the beginning: Y-block Ford power and plenty of it! First built in '93 with a deuce frame and a bored out 312 with six twos, Bobs A-bone now dances to the tune of 340 inches of '56 Ford Y-block jazz and it consistently busts a move off the line with every panicy launch. Now the skinny (3") Halibrands jump for joy, thanks to the new chrome moly tube chassis - remember that power to weight ratio rule? It's the key to hot rod happiness! Bob also used the '34 Ford front suspension, but opted for a solid mounted 9" Ford out back with 3.90 gears in the Mark Williams pumpkin and Dutchman axles holding up yet more Halibrands. A Wilcap adapter allows the use of a full on Powerglide race trans behind the archaic Y-block (when Y-blocks and ‘glides were new, who would've thought they'd ever team up to pull a Model A down the track like this?!). The Lincoln Hoflek (Albany, Oregon) painted body is another flyweight fiberglass job (by Anderson Industries), enhanced by Pete Wards' (Lebanon, Oregon) period perfect striping and lettering.
The focal point of Bob's A-bomb has to be the Y-block tucked under the cowl. What started out as a '56 292 block has been bored to 3.830 inches and a Moldex billet crank sporting a 3.70 inch throwing arm brings the cube count up to 340. Downstairs, there's a Jerry Christenson and Virgil Hansen fabbed main bearing girdle to handle the stress of the Oliver rods and Ross pistons doing the cha cha at 6000 rpm. Comp Cams got the nod for valvetrain pieces, while B&B Speed Shop shows more of their handywork via the snarky headers. Perched atop the Jerry Christenson massaged stock heads is a Yestertech intake manifold, supporting the B&M blower. And feeding the huffer is the crown jewel of Bobs silver bullet: The rare Hilborn GMC "E" model hat injector, dumping bucketloads of methanol into the hairy little Y-block. And just how much hair does this thing have on it? Well, so far, an 8.77@151mph is what's printed on the E.T. slip tacked to the bulletin board at the Shedd Cafe. So far, that is..... 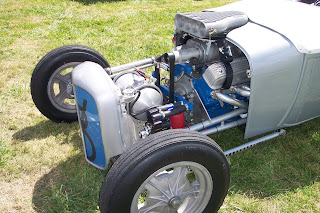 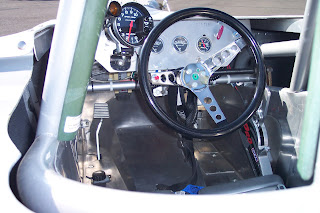 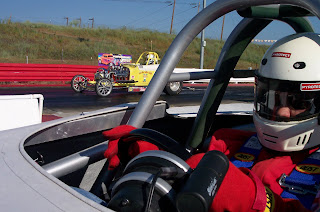 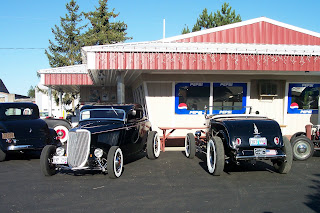 Bob (left) and Jim (right) have a reserved table, too. 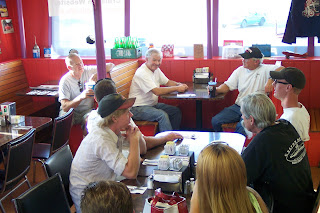 Meanwhile, back at home, a farmer's work is never done... 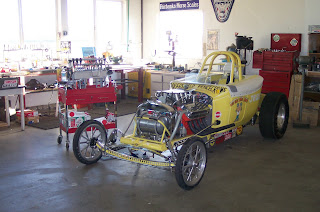 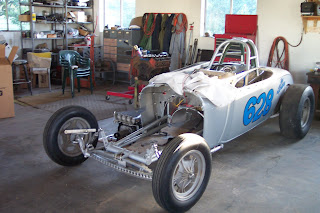