Last week's childhood theme prompted an unprecedented response, including a few submissions of childhood memories too cool not to post. So consider this week's post an encore to childhood.

And speaking of those crazy kids and their kooky shenanigans, one of them hacked my computer last week and infected it with a nasty virus that wiped out the bearings in the process. Oh, you kids - your hijinks keep me in stitches! Hacking must be the new toilet papering. You got me this time, you rascals... Anyway, this week's blog will be short and sweet. My computer is up on the rack at a local shop, with the rods hanging out of the pan. Once it's fired and dyno tuned, we'll get back to business as usual here.

So, back to childhood...

From Cole Foster, son of Pat and keeper of the flame:

After spending the weekend with Jim Glenn (my dad drove his Funny Car in 1976), a lot of childhood memories came to mind. Someone asked me about 15 years ago to tell them what it was like being a kid growing up at racetracks. This was my response................... (Photo courtesy of Cole Foster)


WHAT I DID THIS SUMMER =

What a childhood. Growing up at racetracks, spending summers on tour with the (Barry) Setzer car, living behind The Greek (Chris Karamasines) in south Chicago. His kids were wild and the 'hood was rough. Me and my little brother got a ass kickin' the first day there. Me and the local bad kids caught the shed on the side of Greek's house on fire! Big time ass whipping!

I remember Indy in '75. Just my dad, Alan Gillis, me, and Alan's girlfriend. I was one overworked 12 year old. Sometimes I would drive the race car back to the pits, being towed by truck. Body down, night time, them telling me, "Jump in. Don't hit anything", and going 50 MPH back to the pits, honking the horn, passing other cars, just missing fans, trash cans, oil barrels... Those things were so hard to steer with their castor, butterfly wheel, and I couldn't see #### over the dash. Fuel, oil, clutch dust, tears and sweat from terror running down my face.

Wild, for a 5th grader on tour. And pals with Jungle, Tharp, Pulde, Snake - those guys were in their 20's, pocket full of $$$ .... Women adored them, locals feared them. Doing amazing things with race cars, they were true RULERS and still my heroes.

I didn't actually stop at the Grand Canyon like most 5th graders in my class did, but my "What did I do this Summer Vacation" stories made my teachers faint: Tarzan [Hot Tuna], shooting a .44 out the truck window, or throwing half sticks of TNT on the highway for us to try to miss. Or Budds Creek (Maryland), with four Funny Cars abreast under the lights - crazy fuckers. I witnessed and heard stories that most would think were made up.

I wouldn't have traded my memories of my childhood - my gold plated back stage pass to drag racing - for anything! I couldn't even imagine being in my twentys, driving a fuel car, traveling around the country with a group like they did. Rockstars that didn't have to stuff their jeans, 'cause there's no questioning what those boys were packing... True American Gladiators.
- Cole


And from Motormouth Ray, in New York: 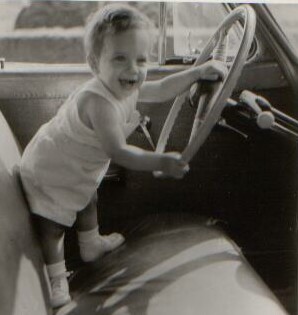 Ray, learning to drive a stickshift. He can outbang Ronnie Sox today, while wearing that same smile.

I don't usually promote events on this blog. But when I do, I pitch the Hot Rod Hill Climb in Georgetown, Colorado. September 14th. BE THERE!!! I began planning my trip a year ago, but won't be going now. So you'll have to have my share of the fun. 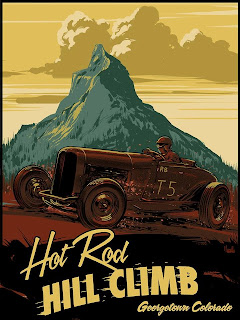 When Jeff Norwell gets onboard with the artwork, you know something special is afoot. 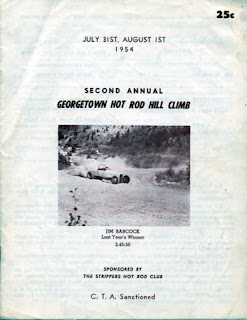 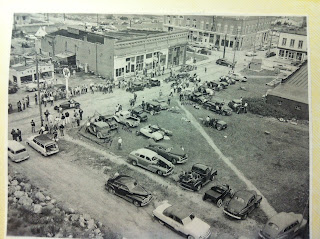 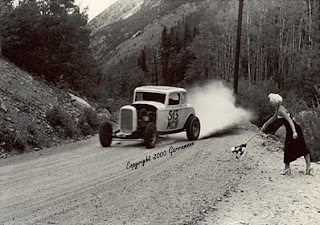 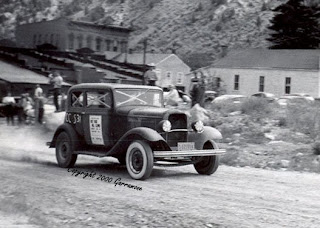 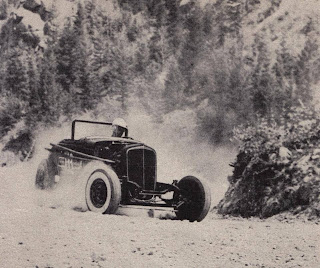 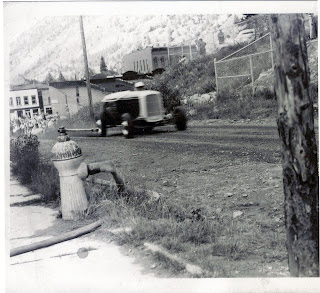 Some of the original competitors at Georgetown. Best part: Some of these guys (and these cars) will be at this year's event! (Photos courtesy of Hot Rod Hill Climb)

The second - and last - running of the Hot Rod Hill Climb was in 1954 at Georgetown, Colorado. It's back this September, at the original location. Strictly traditional cars, surrounded by Rocky Mountain beauty, doing what they were built to do: Hang it all out, in honor of the original adrenaline junkie daredevils who ran this course in 1953. All of my pertinent info died with my computer, but Google Hot Rod Hill Climb for the lowdown on this most anticipated event. 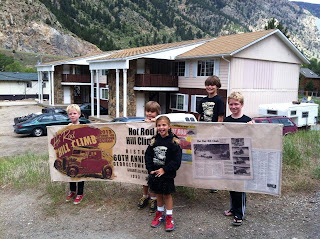 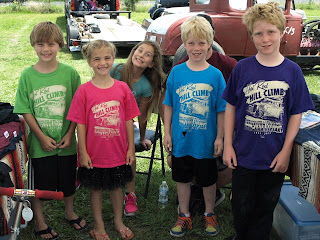 Mike enlisted these local kids to help with the grassroots promotion of the event. They seem to have hit every car gathering between Denver and Joplin, Missouri. There are apparently no child labor laws in the midwest.

It turns out, my computer is alive! Alas, I can't say the same for the fifteen years worth of writing and photos stored in it - it's all gone. But I did have copies of some of that content on an external storage device. Word: We have determined that the deadly virus came in through my McAfee security program. Bittersweet irony...

And that's it for this week's blog. Not what I had in mind, but better than nothing (maybe).

SENT FROM MY LOCAL PUBLIC LIBRARY

x
Use your imagination to envision this week's squirrel.
Posted by Scotty Gosson at 6:26 PM No comments: