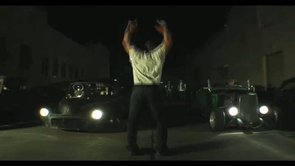 It was last September when fellow local yokel Chris Darland gave us a sneak preview of his American Thrill Ride film (see American Thrill Ride - Sept. 2011). Imagine the cast of Clerks playing the leading roles in a satire of Two Lane Blacktop and you get the picture. Now imagine the cast of Clerks are all old friends of yours and you can understand the rush of attending the World Premier of American Thrill Ride last night. There isn't an actor in the bunch. These parts are played by mechanics, fabricators and laborers - all of whom can be found trolling the streets of our town at any given hour in grossly overpowered machinery. I've known most of these characters for years and even worked on some of the starring cars. Hell, my own car even makes a short (10.32 seconds) appearance (above, during opening credits). The September story ended with a prediction that the project would be finished in a couple of years. Chris got it done in eight months. During that time, work continued at the usual panicky pace at Chris' Hot Rodz shop. Chris really likes coffee.

Our fair city has witnessed a semi-renaissance of vintage movie theater popularity as of late, with two multi-million dollar restorations seemingly competing for Biggest Deal status. Beautiful venues, both. We also boast a valley full of faceless multiplexes. But Chris deemed them all unworthy of hosting the Premier. He held out for a location appropriate to the subject matter and production values of the film. After months of herculean negotiations, the perfect viewing locale was finally secured at Angelo's Pizza, across from the bland new Autozone store, along Strip Mall Row. Seating was limited (you never know when a softball or soccer team will hijack the joint), so early arrival was encouraged. The variety of cars in the parking lot represents the vast diversity of gearhead interests in the area. Every walk of life was represented and every niche of the hot rod microcosm, as well. The film project was a true community effort, and the Premier was attended by everyone from unemployed wrecking yard dismantlers to doctors, lawyers and Indian Chiefs. 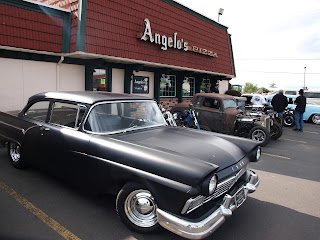 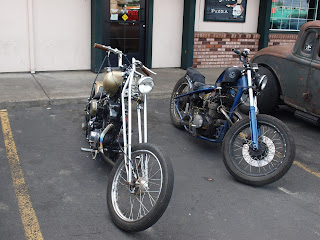 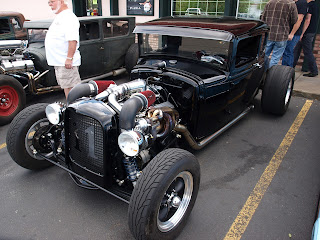 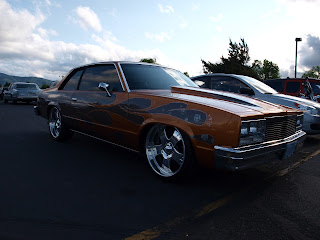 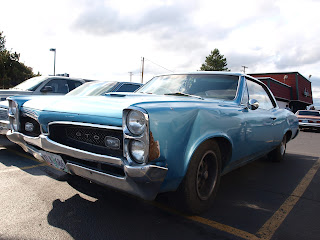 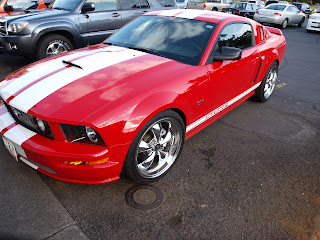 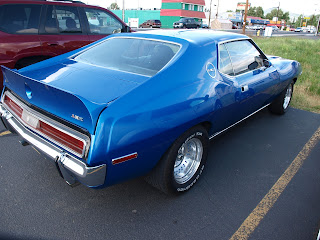 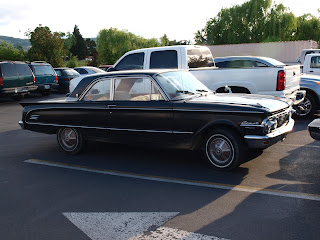 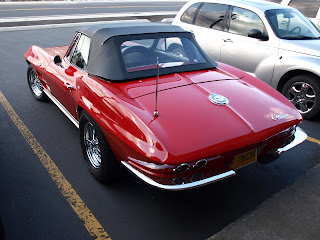 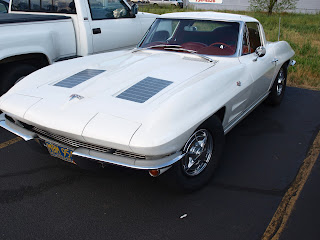 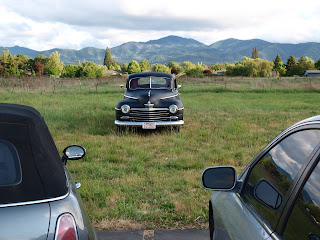 This Mopar beater started the overflow parking in an adjacent field, as nearby apartment residents strolled in to enjoy the free car show. 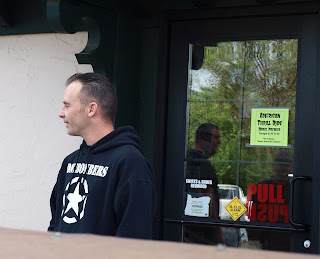 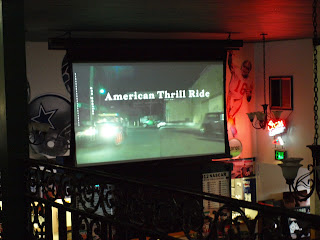 After a couple hours of bench racing and pizza scarfing, tension had swelled to the boiling point. When the lights dimmed and this image hit the screen, backed by a screeching psychobilly soundtrack, the throng erupted into a deafening cheer and it was on. 90 minutes later, we staggered out to the parking lot with aching jaws and ribs. Mission accomplished! Way to go, Chris... 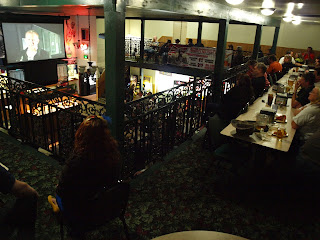 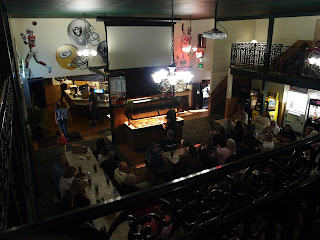 Dinner and a movie with a hundred buddies... priceless.

Elvis running the NASCAR circuit? Chuck Conners bangshifting a roadster? Frankie Avalon shoeing a Fueler? This kind of bizarre miscasting amused the general public in ridiculous exploitation flicks from High School Confidential to The Fast and Furious, as bona fide gearheads exited theaters and limped back to their garages, shaking their heads in baffled disgust. Now, the film genuine hot rodders have been waiting for since the invention of celluloid, has finally arrived. Getting it right turned out to be as simple and easy as following these basic guidelines:

1. DO: Remember that reality begins at least a thousand miles away from Hollywood.
2. DON'T: Try to force your misinformed idea of a culture you're ignorant of up anyone's ass.
3. DO: Have a chassis fabricator write, direct and produce the film.
4. DON'T: Cast hotrodders as background extras in a lame attempt at credibility (the most insulting form of exploitation).
5. DO: Cast hotrodders as hotrodders (they can also portray cops, hit men and bartenders with insightful accuracy).
6. DON'T: Present gearhead culture in a dry documentary form that alienates anyone not born into it.
7. DO: Feel free to parody every so-called "car movie" ever made. Real rodders' angst needs a healthy release.

This reviewer was tempted to celebrate America's first real hot rod film with a fifth asterisk, but refrained due to credibility consideration. There are flaws. The plot is unnecessarily convoluted. The hero drives several different cars, which confused and distracted some viewers. Bits of dialogue are nearly unintelligible. These issues are chickenshit, compared to the atrocities committed by the makers of the films mentioned above. But hey, a propensity for nitpicking is what sets us reviewers apart from you commoners. We know you hate us for making obscene money by attending free premiers of films that you must fork over hard earned green for at the box office, but being hated is a small price to pay for the perks. Besides, if we weren't so pompous, you might be tempted not to read our reviews and obey our orders (which are handed down to us by our corporate sugar daddies). But I digress...

There's nothing more satisfying than seeing people do what they love. Whether that's building and driving hot rods, or getting in some laughs at the expense of those who've blatantly exploited them, the gratification is equal. But the best laugh of all is when we laugh at ourselves. Do it from the heart and do it often. Trust me on this. American Thrill Ride will be available soon on DVD. See www.divebombersgarage.com for details.