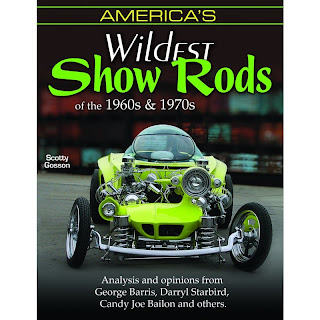 Dave Shuten's recreation of Ed Roth's Mysterion graces the cover. Among the surrealism between the covers lurks the Drag-U-La show/go car...

NOTE: Text problems on this post will hopefully be corrected soon. My apologies. Damn electrons...

She impatiently flipped through the pages of America's Wildest Show Rods with a languid nonchalance that reminded me of myself, feigning interest in the multiple shoe catalogs that arrive daily at the Saint Shellski Cathedral. When she abruptly stopped, I couldn't resist an over-her-shoulder peek at what had caught Shellski's attention. It was the Drag-U-La Goth Box dragster. I was impressed that she was drawn in by an obviously drag-influenced show rod. In the feature, I mentioned that builder Dick Dean made three fiberglass copies of the car (all based on Nelson-Martin Dragmaster chassis kits). While those tribute Drag-U-Las apparently decayed away with the ages, one (claimed to be the original) resides at The Autoseum in Mineola, New York. Owner Andy Perillo has been known to take it out for the occasional street blast. So when SGE East Coast correspondent Ray Guarino tipped me to rumors of an impending Sunday afternoon grudge match between Pirello's Drag-U-La and "a similar car", I dispatched him to the scene, and soon received the following report from Ray:

"They ran a couple of cars built by a local guy named Jimmy first: The Coffin Car (a street version of Drag-U-La) and his Boothill Express replica. That warmed the crowd up, so they pulled out the original Drag-U-La and lined it up against the Boot Hill to best replicate the Drag-U-La vs Munster Koach pairing from the Munsters TV show. (Episode 36, "Hot Rod Herman" -  Filmed at Riverside Raceway - SG).

The Express runs a 350/350 combo with an S-10 rearend and smokes the meats at will. It took Jimmy less than 6 months to build and is registered as a '28 Ford. I guess that's the chassis he started with, or the horn button he's using. Drag-U-La uses a Ford 289 engine backed with a TH-350 trans. It'll move, but hasn't been driven harder than around a show field in many years. Besides, the Drag-U-La is the #1 car that Barris had Dick Dean build for the TV show and is ultra-priceless, so they knew they weren't going to make a full bore pass with it.

The cars lined up as it started to drizzle. The drivers (Jimmy, reining the Express, and museum director Sam Pardo at Drag-U-La's butterfly) brought up the RPMs and the cars took off, with the Express smoking the tires and Drag-U-La bogging a bit.

The express got the jump on Grandpa Munster's old ride and was ahead by a couple of car lengths by half track. Right about then, the rain increased and the spotter at the end of the track bailed for cover into a waiting car. The Express peeled off to hide under a stand of trees, and Drag-U-La beat it back to the safety of the Autoseum.

The end of the story is that we don't actually know if Drag-U-La had enough top end charge to pass the Express. The only way we'll ever know is if we can get these two dead-relics back for another round of Long Island street racing, the way we like it: Down and dirty on a Sunday, when Johnny Law is munching donuts at a nearby Dunkin' store!"

Upon further investigation, Ray dug up this little nugget: "I happen to know the builder of this car, and caught him red handed trying to pawn off the dual quads on top of the Ford engine as real, when in fact, they're dummies on a fiberglass intake, hiding a 2 barrel!! He's a fabricator and builder (Barris' East Coast guy), and he wasn't too happy that I nailed him. I said something along the lines of "don't ever try fooling a grease monkey with fiberglass", turned, and left the room! Anyone who tries to sandbag a hot rodder deserves to be called out! Actually, Andy is a good guy, and he did exactly what he was asked to do: Build a functional, yet demonic looking car that could be driven. So I can't fault him in the long run. But c'mon, he had to know someone would catch on. Then again, most people never get close enough to those cars to see little things like fuel line routing and linkages, so I guess I did have an upper hand. To his credit, that car has been together for many years and has gone unchallenged, so I guess he won in the long run. I should tell you about the lamp parts he cast for some of the coffin decoration..."

The following graphic evidence accompanied Ray's report (though the captions are mine): 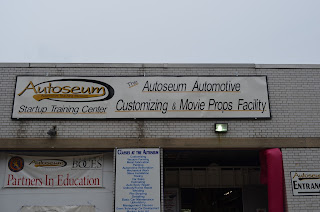 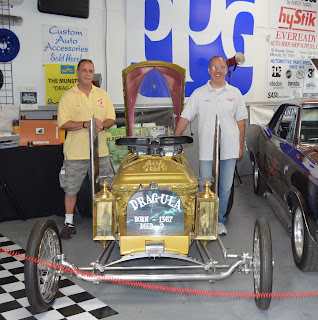 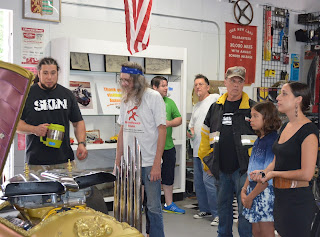 Fistfuls of dollars were reportedly exchanged along with plenty of smacktalk, long before the cars even left the shop. Nice T-shirt on the headband guy. (Photo courtesy of Ray Guarino) 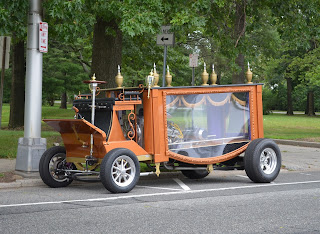 What more appropriate foe for Drag-U-La than a Boothill Express tribute? Instead of a heavy Hemi like the unavailable original, this Express sports a svelte smallblock Chevy. Place your bets now for a classic Chevy vs Ford street shootout...(Photo courtesy of Ray Guarino) 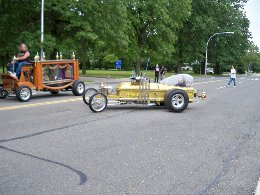 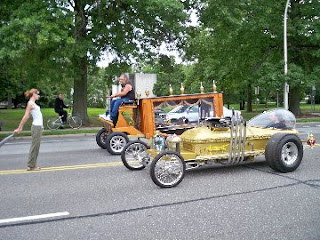 The contestants were rolled out onto the street in front of the Autoseum, lined up, and set free. The spirit of Grandpa Munster battled Ray Farhner's ghost down the County Seat Highway for all the marbles, until they encountered rain and were forced to lift. (Photos courtesy of Kenny Hammer) 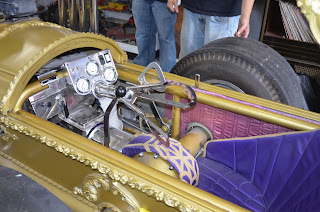 Sayeth Ray: "Personally, I would have driven the Drag-U-La myself if I had the chance, but then again, those ancient slicks probably would have protested a bit too much, and I never did like seeing a third member perched between my legs and MY member!!!" I don't know what Ray's worried about. This 3rd member is upholstered in sumptuous velvet. Looks safe and comfy, to me. (Photo by Ray Guarino) 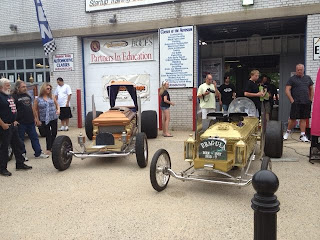 Jimmy's beefy Coffin Car (a fiberglass Drag-U-La copy) and the spindly original Drag-U-La, comparing notes. There's footage of the Coffin Car driving down the street at the Autoseum facebook page, and video of the great show rod street race should be posted soon.

(Ray's) Famous last words: "I guess you could call this something like Ridiculous Right Coast Street Racing: We'll race a Camry against a Cammer, a Supra against a Super Duty, or whatever else happens to show up!"


BONUS COVERAGE: At last week's Syracuse Nationals, Ray's pal Artie Shilling and his "Artie's Party" pinstriping army arrived en masse from around the globe, brushing everything that wasn't nailed down, to raise over $73,000 for local charities. Talk about your hot rod heroes! Ray snapped these pix "when I surreptitiously snuck into the pinstripers hidden lair at night, while they were all in the bar." 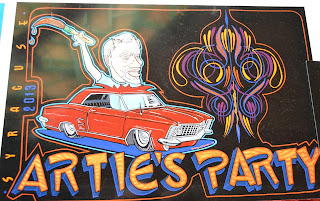 Nice likeness of Artie and his beloved Riviera at the panel jam. 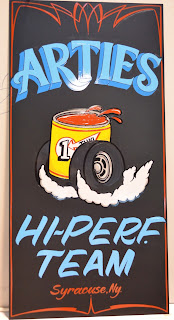 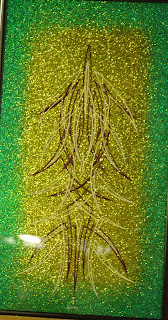 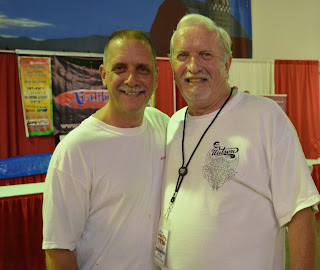 THE REALITY SLAP HEARD FROM DETROIT TO GLENDORA:

It's a mystery why it took so long for it to happen, but last week, Ford Motor Company finally announced their departure from Pro-level drag racing, effective at the close of the 2014 season. Since the announcement, much hand wringing and tooth gnashing has produced little in the way of learning any lessons from the inevitable, to prevent more of the same in the future. It's been at least forty years since Pro Stockers or Funny Cars resembled anything on showroom floors, and the resulting public apathy (and outright anger at witnessing Toyota's elbowing into American motorsports) has emptied more grandstands than Rosanne Barr's national anthem (though many feel it was right up there with the Jimi Hendrix version).

On the positive side, Ford says they'll continue a presence in Sportsman racing, with their Cobra Jet Stock and Super Stock programs. It's nice to see the Sportsmen getting some overdue OEM love. Last year, the NHRA itself announced a new focus on Sportsman racing, but any actual changes remain to be seen, from here anyway. Perhaps the future cure is a return to the past, with brand recognition and quarter mile Pro shows? Or maybe face present tense reality with turbo Pro Stocks? Either way, it sure would be refreshing to let sponsor decals do the talking, and dock drivers points for redundant recitations of sponsor names already plastered all over their cars. Meanwhile, there's a palpable fear that GM and Chrysler will follow Ford's lead, scaring off other corporate sponsors in the process, ultimately forcing NHRA to fold up the tent for good, and place drag racing back into the hands of grassroots-level enthusiasts - you know, "ingenuity in action" and all that anarchy stuff.

PS: Was I the only one to notice mostly empty grandstands on TV coverage of NHRA's Sonoma show last weekend? Apparently, the fans are voting at the turnstiles. Democracy! 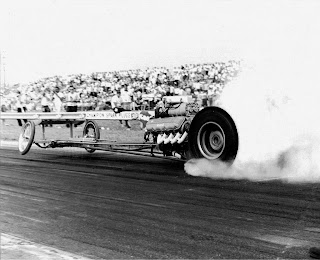 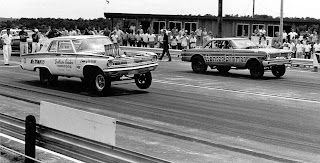 Factory Experimentals: Just like mom's car, on acid. Funny looking, but man, what a trip! Ted "Kansas Badman" De Tar flies away from wind sail Dodge in his Falcon, as SRO crowd cheers favorite marque. This action sold some cars... 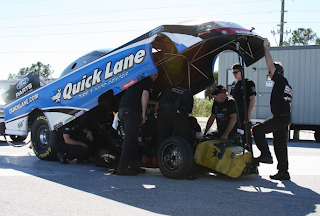 Um... I think it's a Hyundai Pro Stocker. No wait - just noticed the Ford logos. Not sure what engine though - a 289? Looks like an old rear-wheel-drive car. Weird...

Time is rapidly running out before I hit the road for a month of event coverage. I hope to post a farewell report on next week's blog before taking off. I'll be out there with no computer, just a camera, spiral notebook, and a stubby pencil. If I survive, I should have some fun stories to share when I return. I'm considering entrusting the blog driver's seat to Saint Shellski and/or Motormouth Ray in my absence. Stay tuned to see what happens...

As advertised, this week's squirrel: 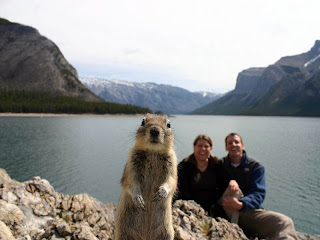 This could be your lucky week!

Posted by Scotty Gosson at 7:16 PM No comments: