CYBORGS DRIVING ON THE SUN

Human + machine = Hot rodding. That's the basic formula. But there are always some hardcores who insist on taking that tenet to the cyborg level and becoming virtual components of the machinery. So it is with Velomobile riders. It was a response to Ron Will's Turbo Phantom SGE feature that led us to Velomobile cyborg David Whitmon in Marthas Vinyard. Intrigued by this new-to-us mechanical creative outlet, we moved in for a closer look. 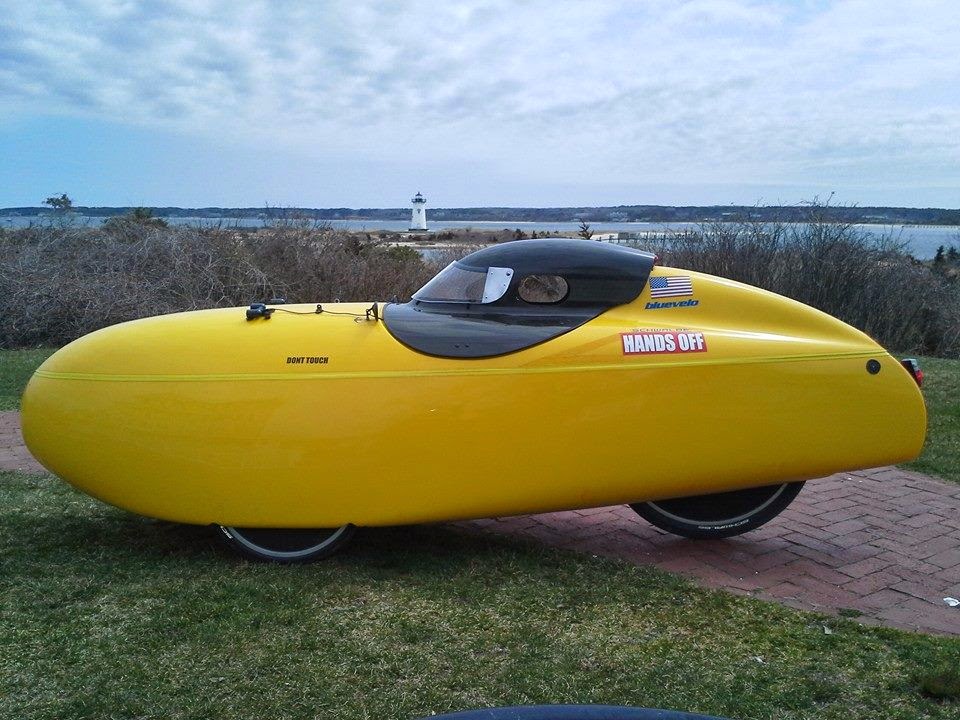 David Whitmon credits this machine with saving his humanity. Nice save, and the Velomobile looked cool doing it. Just like a dragster, this is an extreme alternative transport niche, stripped to its essence.

Whitmon's story is so personal, we asked him to tell it from his unique perspective, which just happens to be overlooking Marthas Vinyard, where pedalers from Kennedys to Bushes have cycled and recycled without ever coming close to a state of hot roddiness. How did Whitmon pull it off?

"Velomobiles are the most efficient means of human transportation ever devised. Faster than any road bike, moped or scooter - depending on the rider, that is. For a fit young rider on a 15 pound top-of-the-line road bike, it's still like riding with an open parachute, compared to to a Velomobile. Aerodynamics is the name of the game.

In a sense, this is a retreating action on my part. In my mid-30's, I was diagnosed with a degenerative joint disorder. The Docs up in Boston wanted to do two complete knee replacements. They lent me a video of the surgery. I watched half of it, switched it off, and went out and bought a bicycle. At that time, I was walking with a cane, and going down the stairs on my ass, as my legs would buckle if I tried to walk down any stairs. My first ride was a short one. Afterward, I was icing and soaking in a bathtub for three days. Then I did it again, and again, and again. A year later, I started a mountain bike club, though my body can't take the beating anymore. I'm 2 1/2 inches shorter now than I was at 19 years old, because of joints and a lack of discs in my lower back. The upright (riding) position is not good for my body anymore. The Velomobile is (operated in) a supportive recumbent position. It's a barcalounger on wheels. I went car-free over three years ago, and despite the harsh winter we had, I have 2,728 miles in, so far this year. And for the last eight weeks, I've averaged 197.37 miles a week. I do all my errands and grocery shopping with the Velomobile. I've run the piss out of it, and it keeps on going." 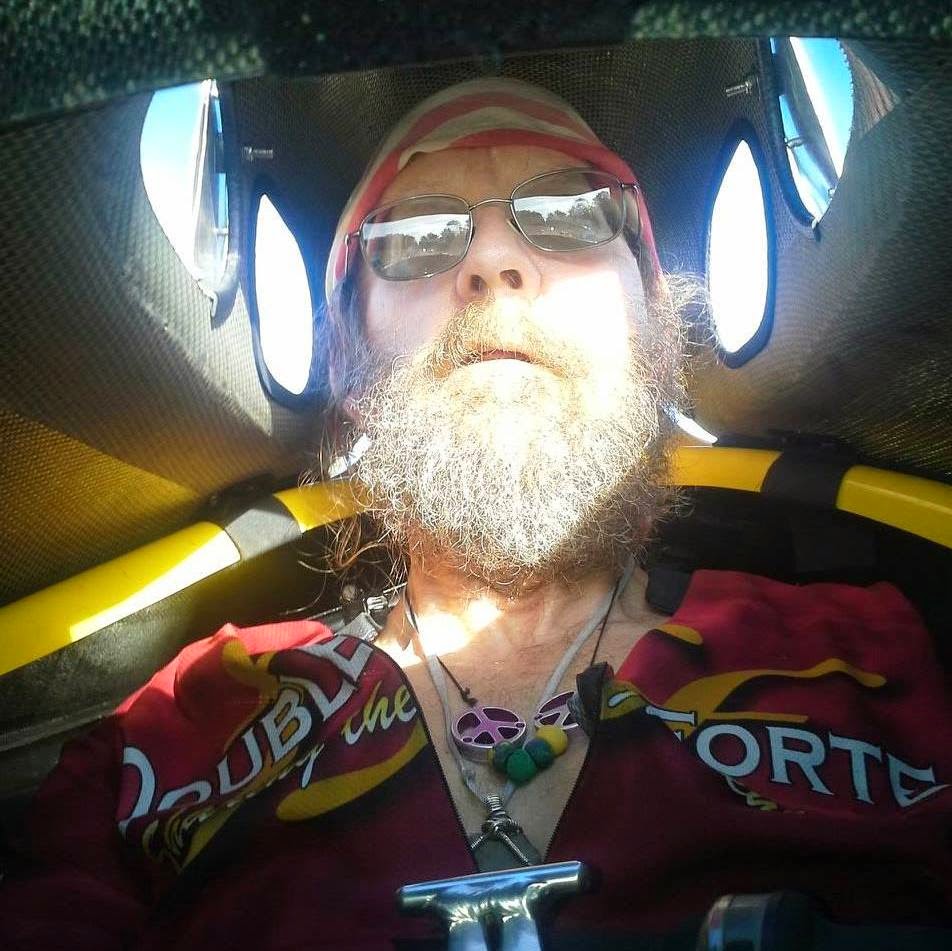 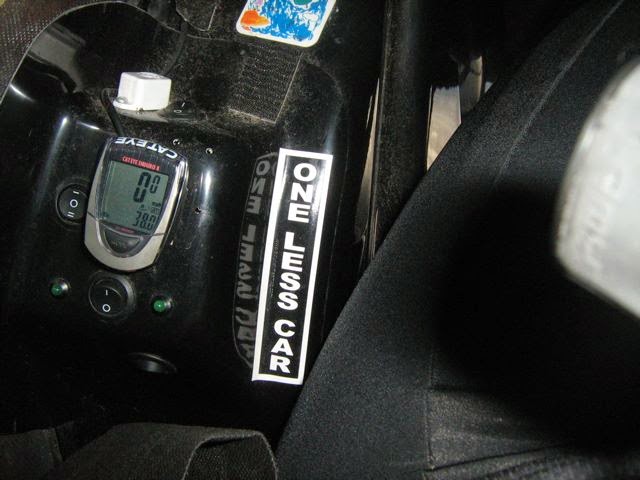 Whitmon's Velomobile interior is snug, but therapeutically comfy. Prominent features include a fully digital dash and mechanical handlebar/joystick steering: "Steering is via a short ten inch handlebar on a long shaft that goes down to the floor and meets a small universal joint. The u-joint connects to a short shaft that goes through the floor and connects to the steering linkages." And there are as many steering concepts as there are Velomobile builders. 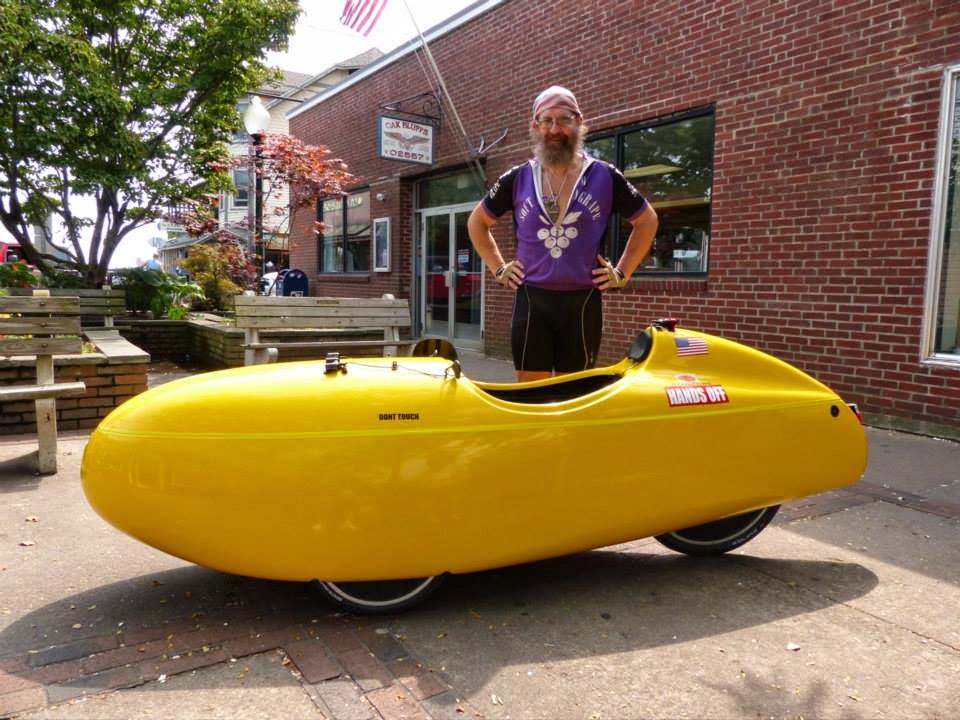 "There are two 20" X 1.35" wheels and tires that handle steering, and the rear 26" X 2" wheel is the (chain driven) drive wheel." Whitmon is obviously driven himself, and hopes the condition is contagious. 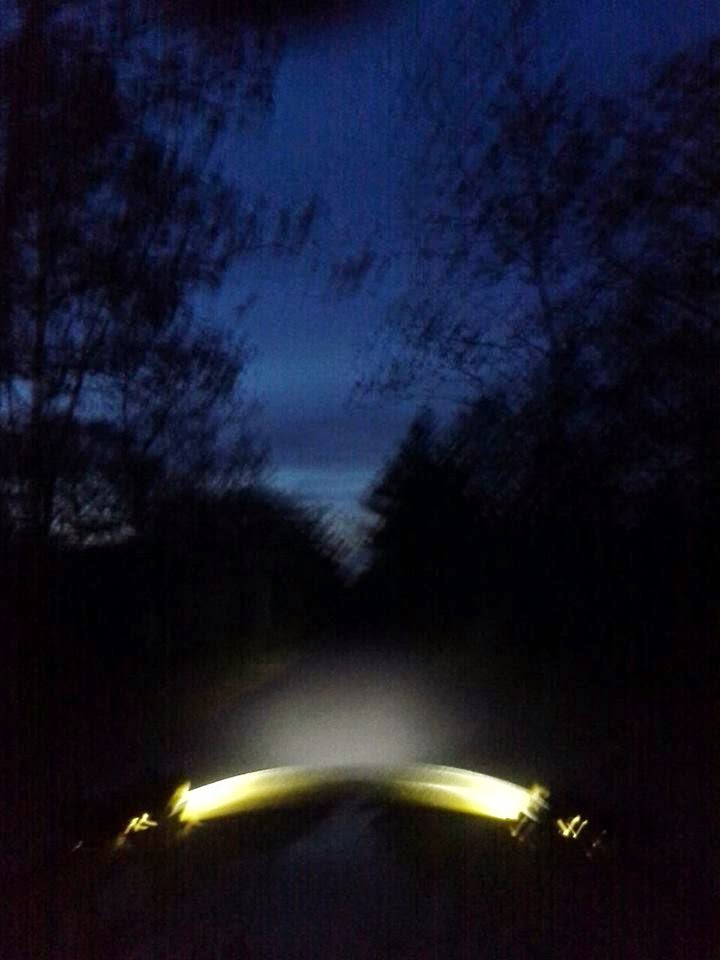 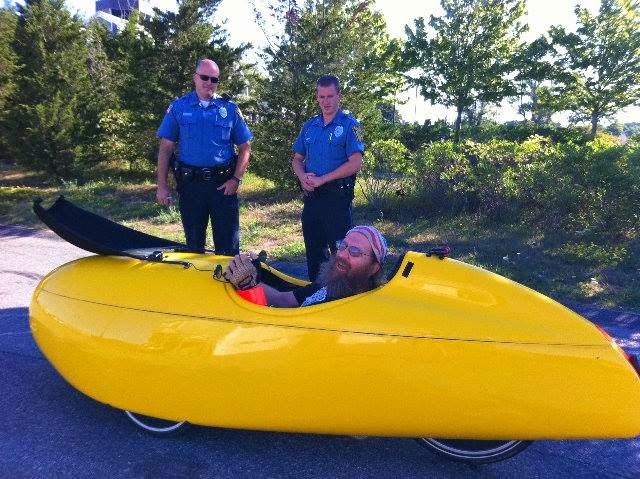 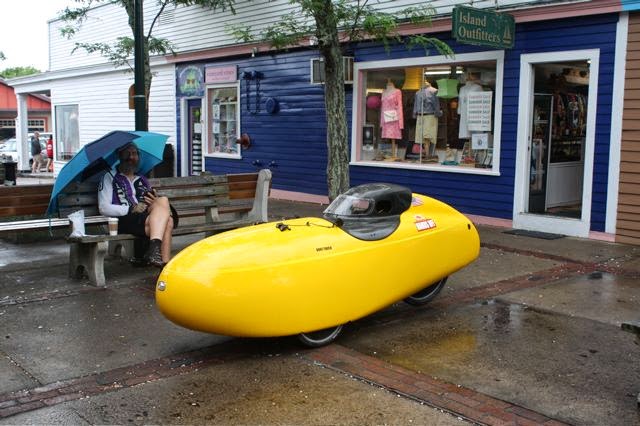 But no matter the weather... 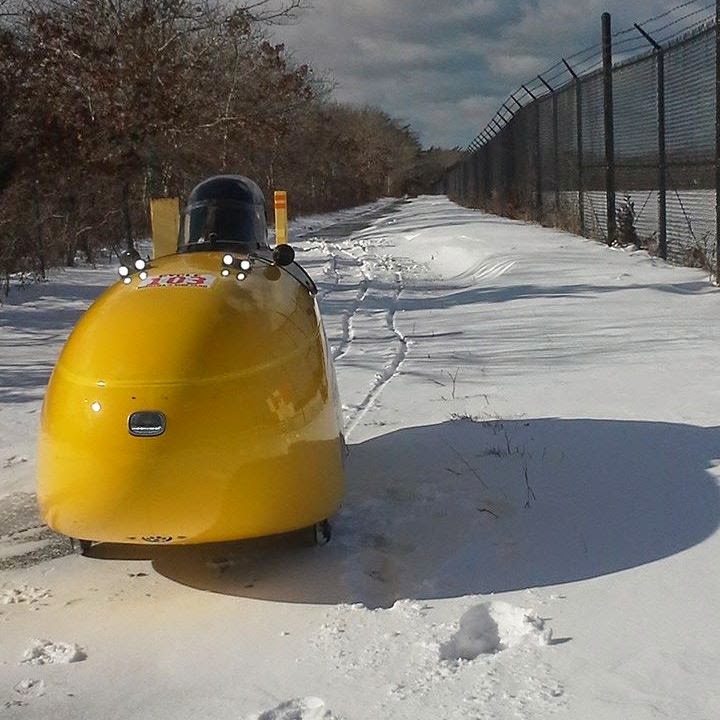 ... Whitmon's physical rehabilitation needs get tended to in style, while leaving only two skinny footprints. 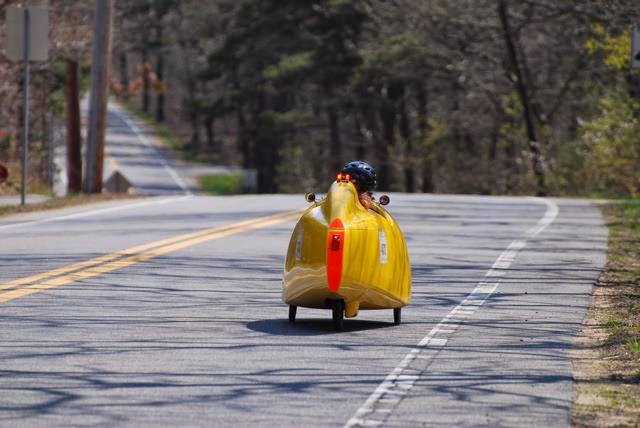 David Whitmon pedals off into a more promising future. Here's to good health and a cleaner road for our grandchildren to travel. 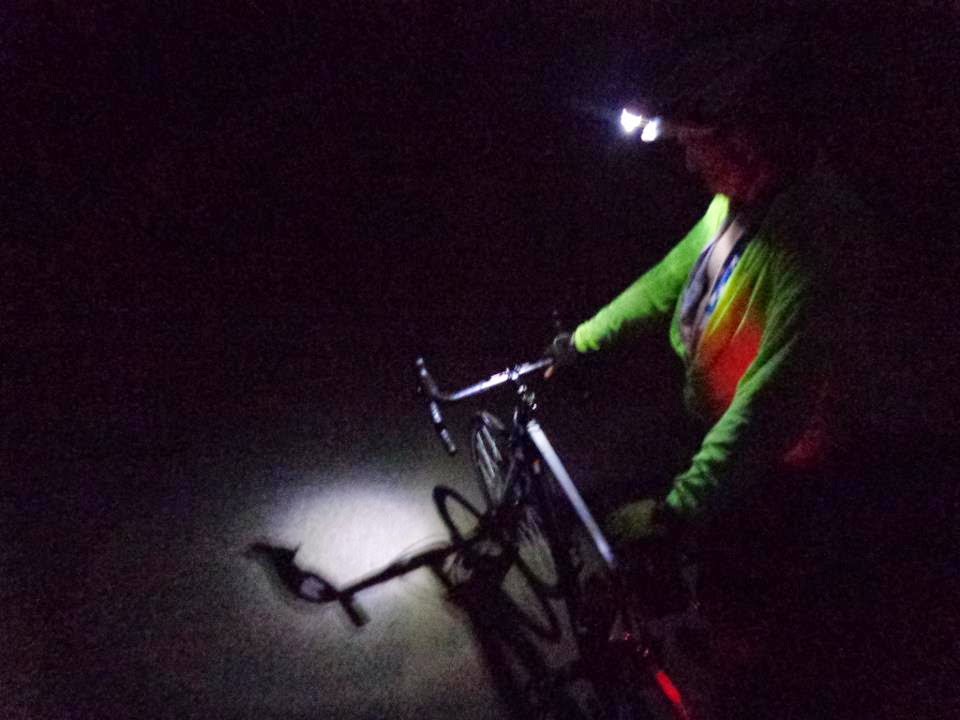 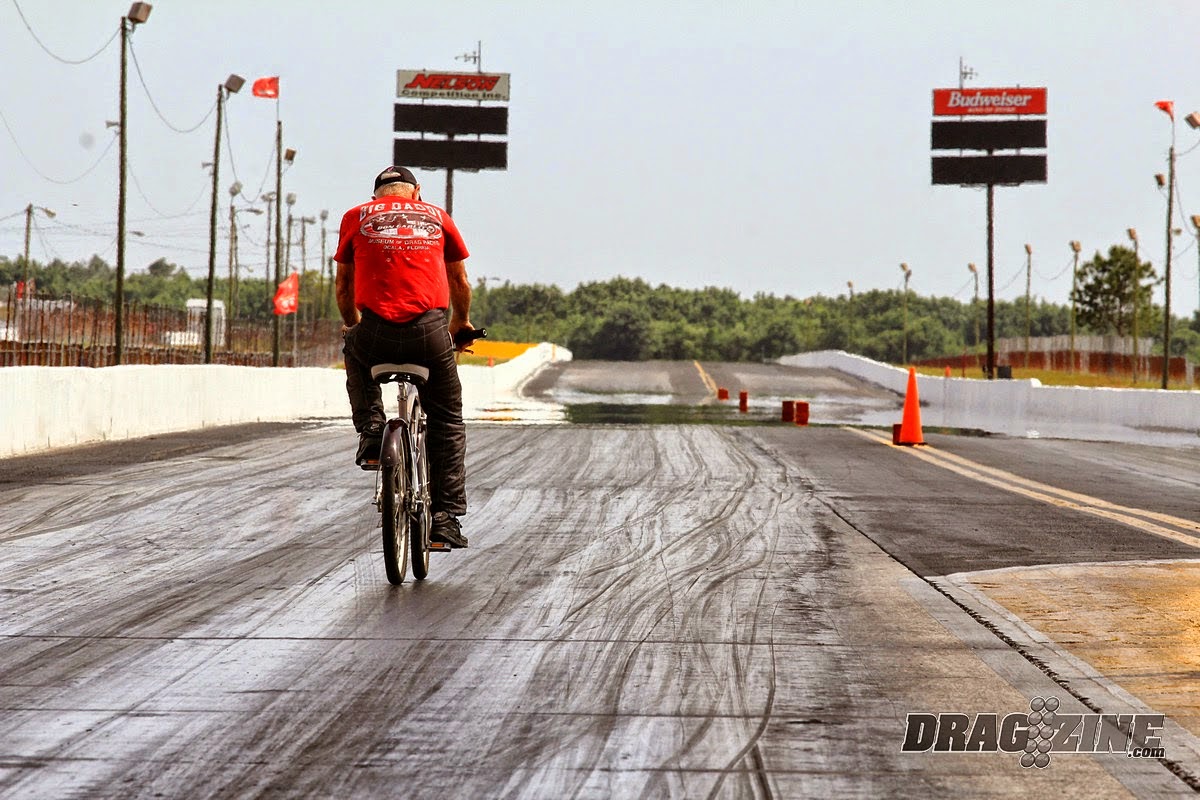 Other proponents of pedal-powered daily drivers include Cole Coonce and Don Garlits. Whitmon is in good company.

As popular as pedaling has become in recent years, bicycles are still nearly as scarce on America's roadways as hot rods (which have been holding steady at roughly 1% of all vehicles for decades). Perhaps the roads themselves can be rethought to lighten the load on future generations. That's the conclusion Scott and Julie Brusaw of Sagle, Idaho came to, after mucho head scratching. 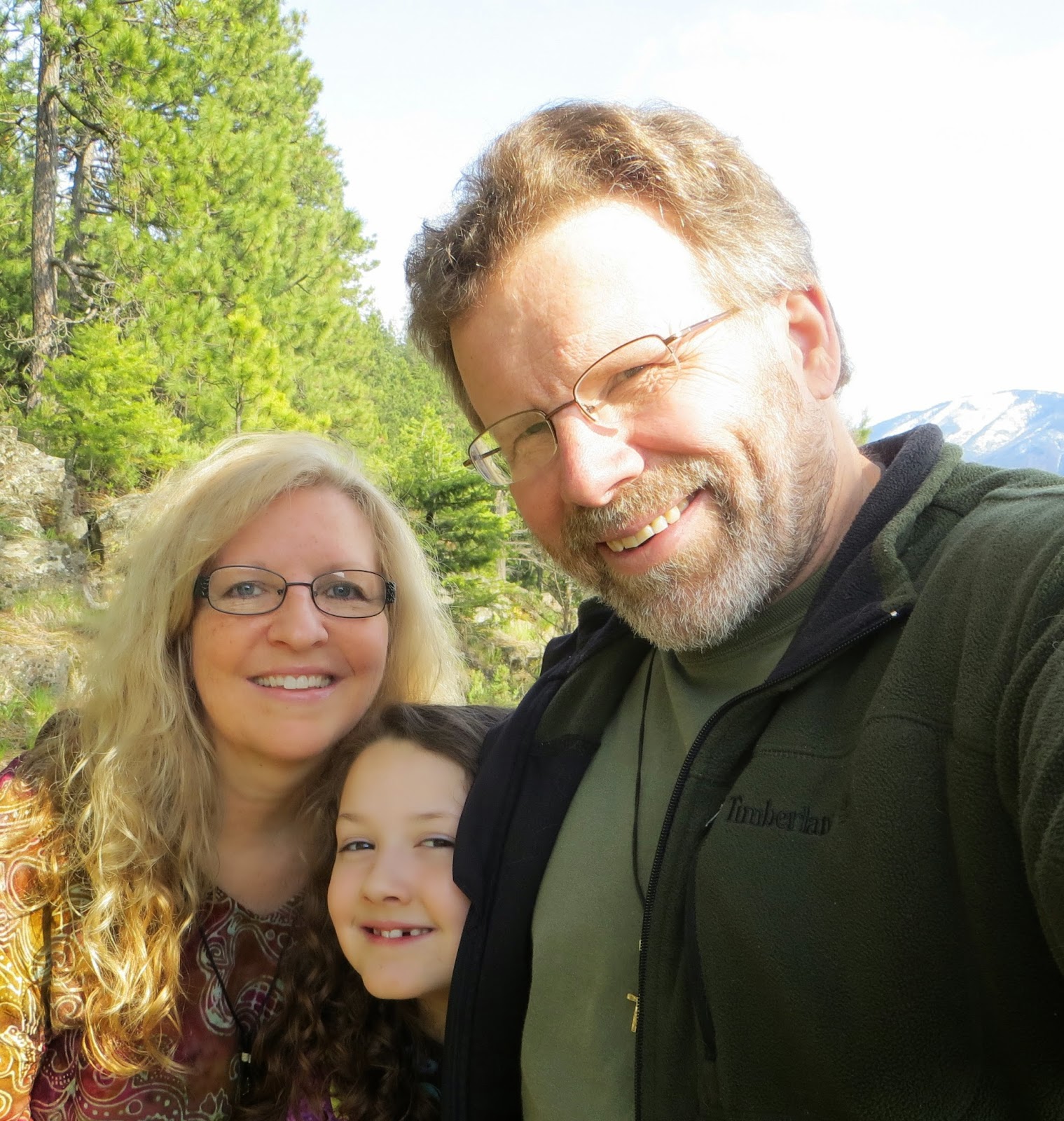 Brusaw family selfie. They look normal enough, but they believe we should drive on the sun.

The Brusaw's recycle glass to build solar panels designed to be driven on. The cells withstand 250,000 pounds each, while paying for themselves by generating electricity. They also feature heaters to melt snow and ice, lights to guide the way, a textured top layer that offers improved traction with lower noise, and the entire LED grid is programmed to display traffic warnings, while underground wiring tunnels double as a vastly improved water drainage system, eliminating unsightly phone poles in the process. And there's more - lots more. Visit https://www.indiegogo.com/projects/solar-roadways for specifics on how constructing solar roadways can jumpstart America's flatline economy by employing the jobless. You'll also find a grassroots fundraising campaign targeting a million dollar start-up goal that has surpassed two million bucks of donations, as of this writing. The campaign ends on June 20th. Guarantee: You may enter the site with skepticism, but will leave enlightened and inspired. 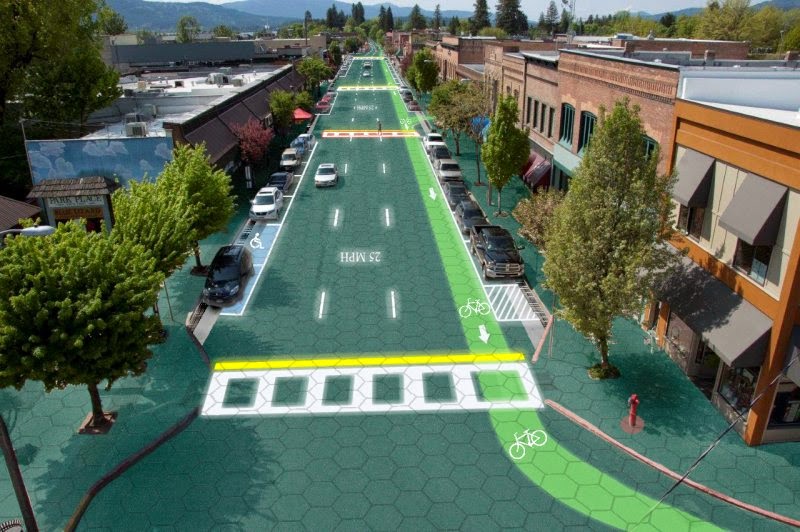 The Brusaw's Solar Roadways concern is based in Sandpoint, Idaho, depicted in this artist's rendering. (Image by Sam Cornett)

Being open to possibilities has always been the key to discovering advancements, be they technical or otherwise. Can you imagine what humans could accomplish as a race, once more of their numbers set unfounded fears aside to embrace the possible? That will be a great day. Until then, it's up to the cyborgs... 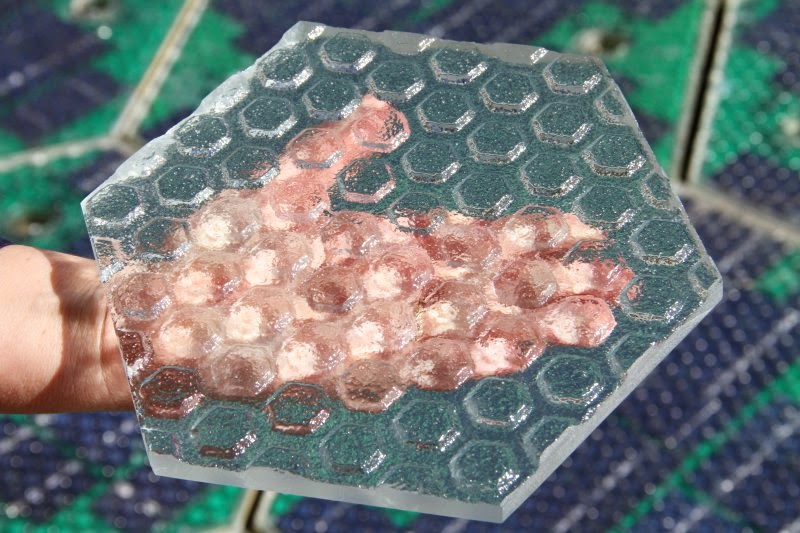 Visionaries are handing us solutions on a transparent platter. All we have to do is accept it. 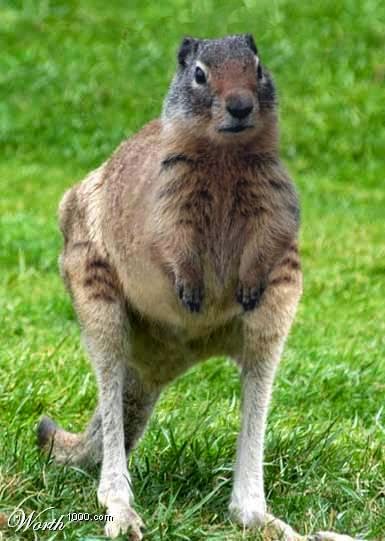 Squirrels worldwide began using Australia as a migration rest area in the 1940's. By the 60's, nature had taken its course and the first hybrids appeared. Today, Australian Squirreleroos rule the streets and racetracks. Their muscular hind quarters allow for effortless engagement of the stiffest clutches and a throttle stomp unequaled in any form of motorsport. With their squirrel-gene lightning reaction times intact, the Squirreleroos enjoy a decided advantage that have inspired more than a few Australian racers to migrate to the U.S., just to remain competitive. Gene splicing is nothing new to these guys. 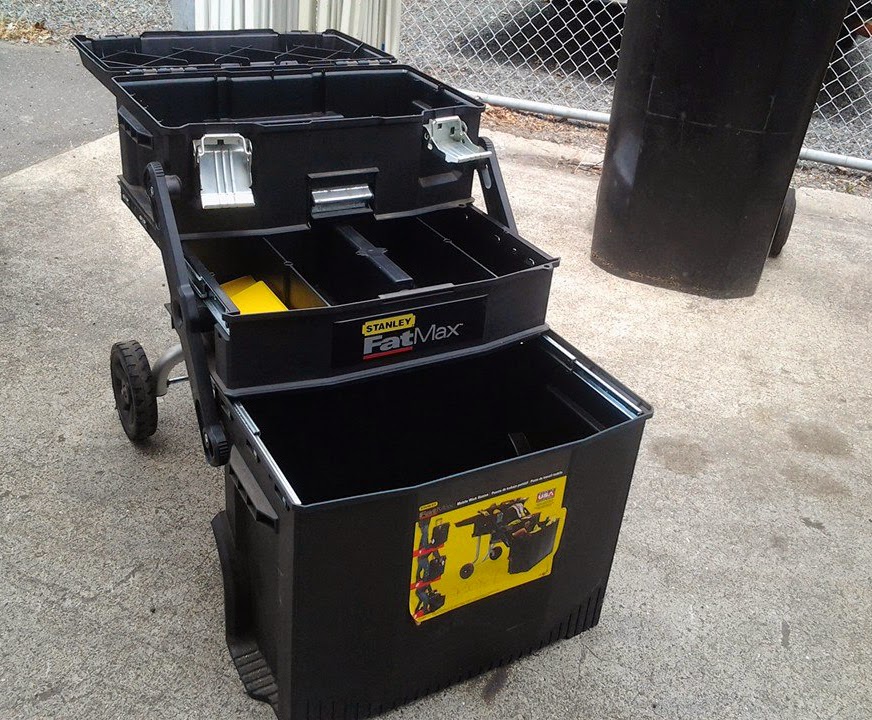 The latest advancement in tool storage, as used by Kiwi Fingerz Mullan to service his fleet of nitro Altereds. Lightweight plastic construction and space-saving fold-away design deem the Stanley Fat Max king of the pits at any track. If you don't have a Fat Max, you're just not getting anywhere.

More variations on the Velomobile. From rod to custom and several points in between: 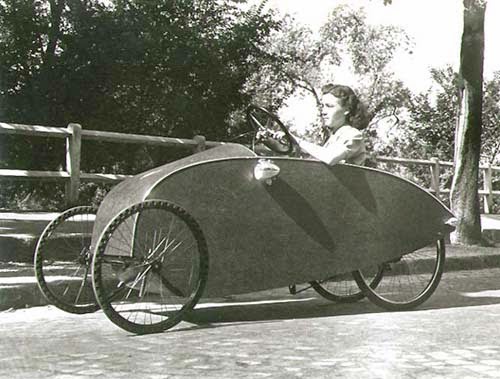 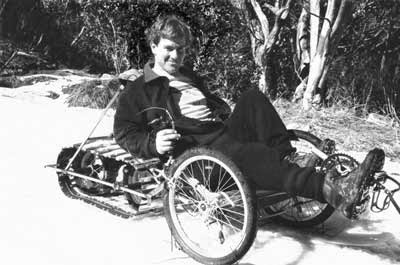 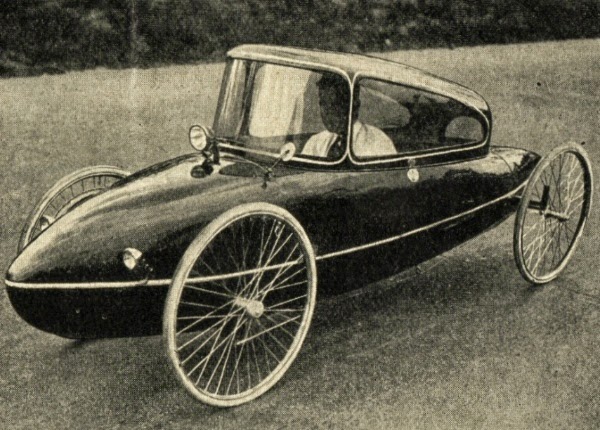 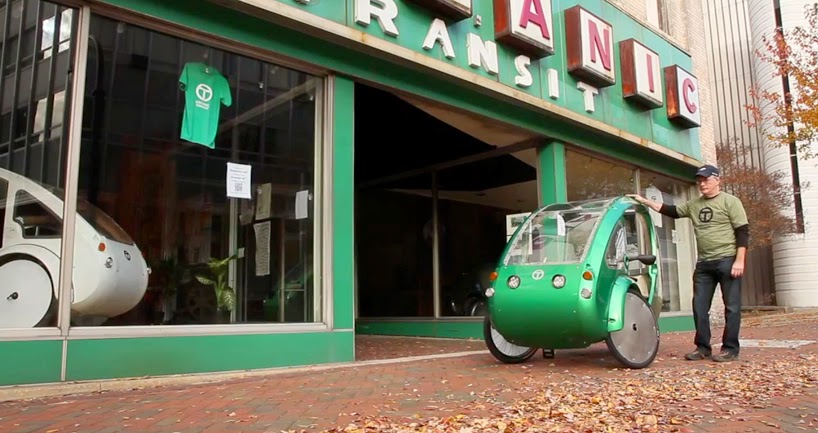 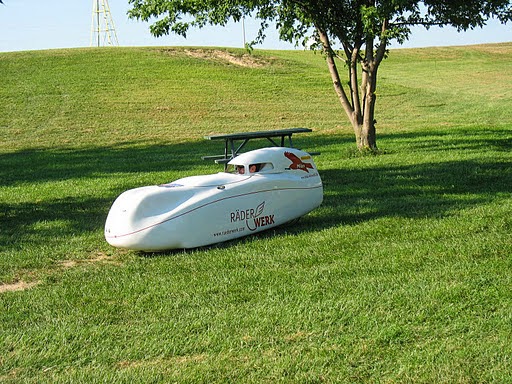 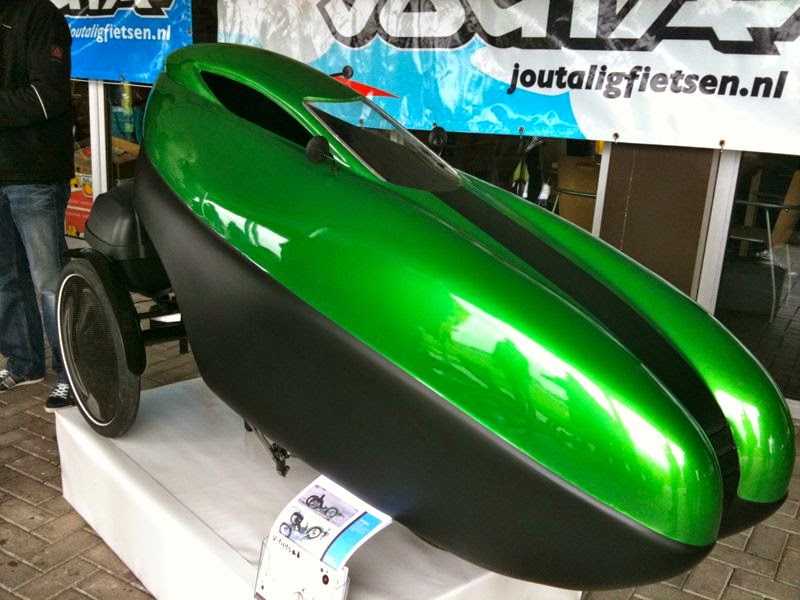 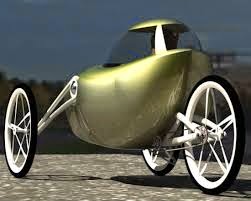 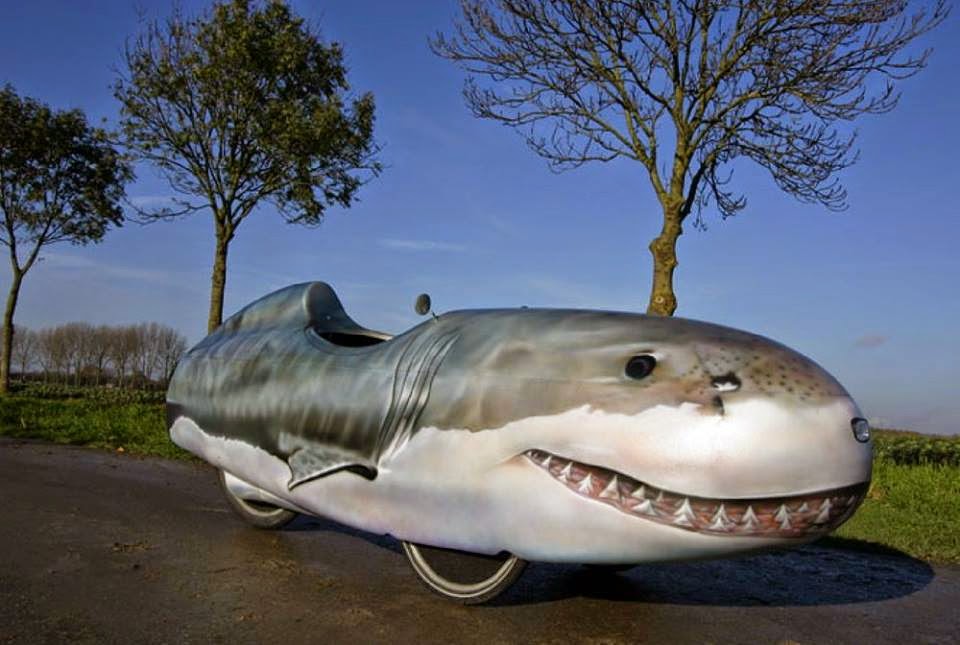 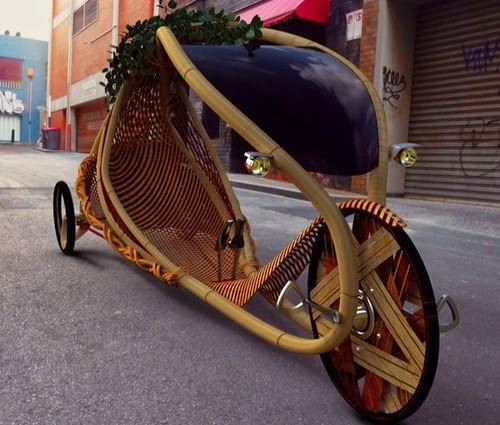 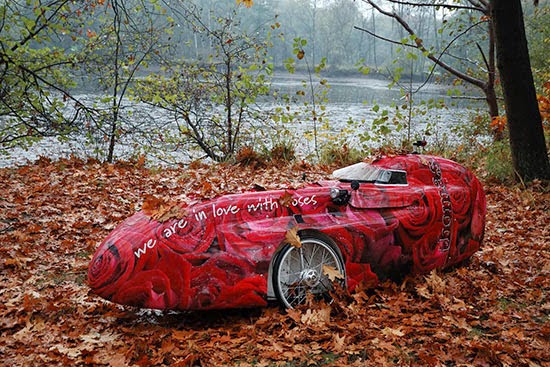 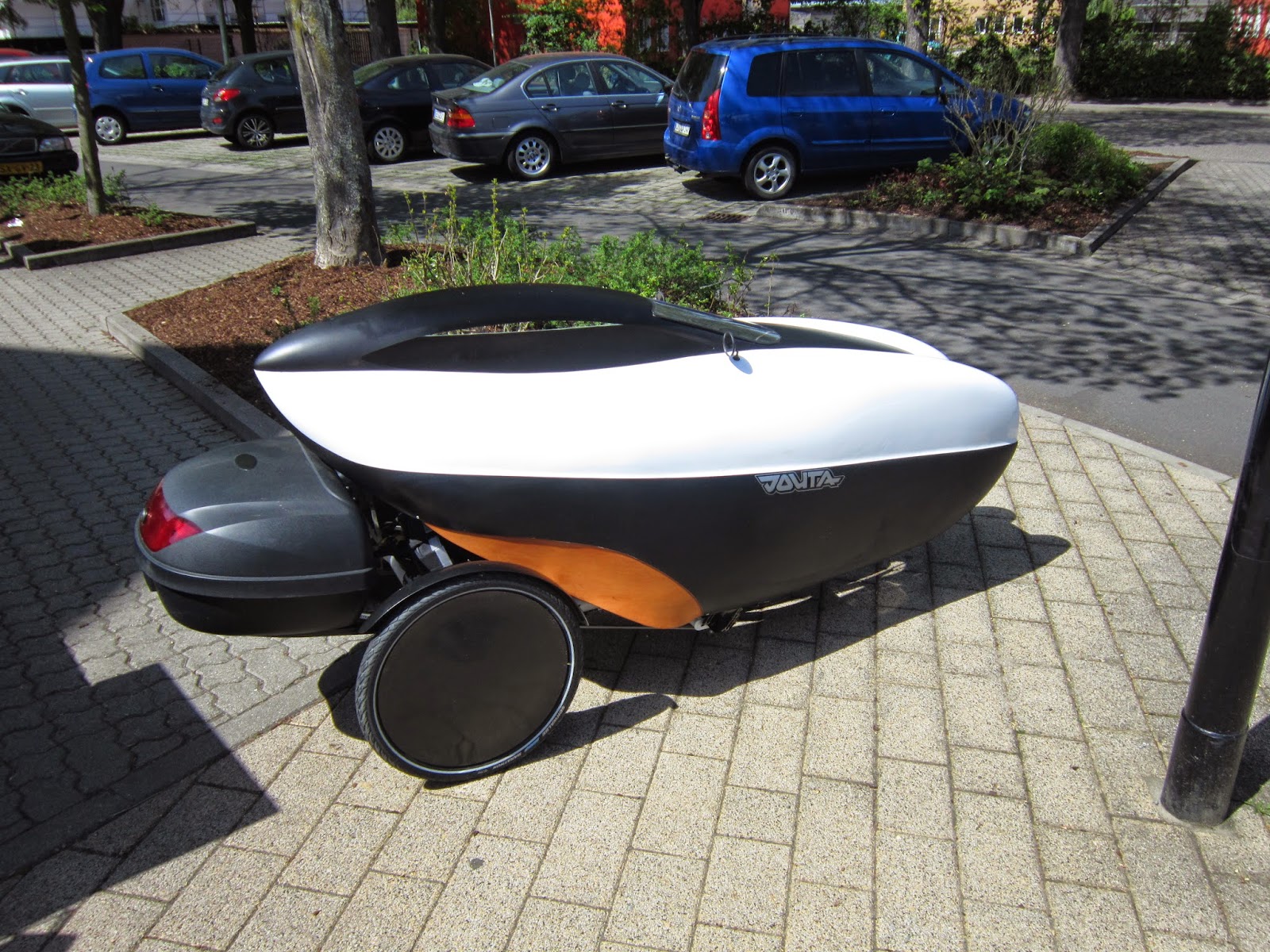 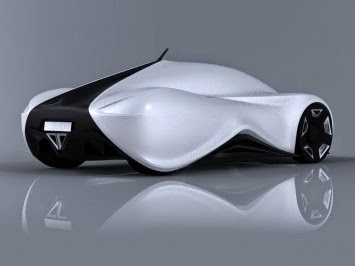 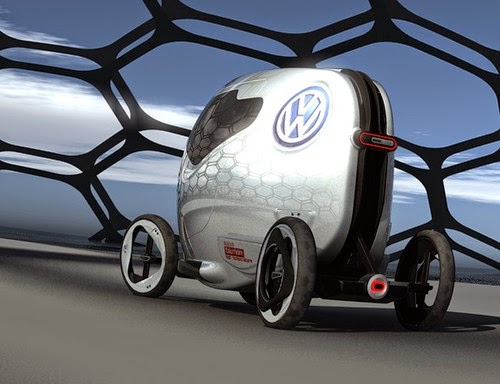 NEXT WEEK: Back to untamed horsepower, and plenty of it. No pedaling allowed in Scottyville. 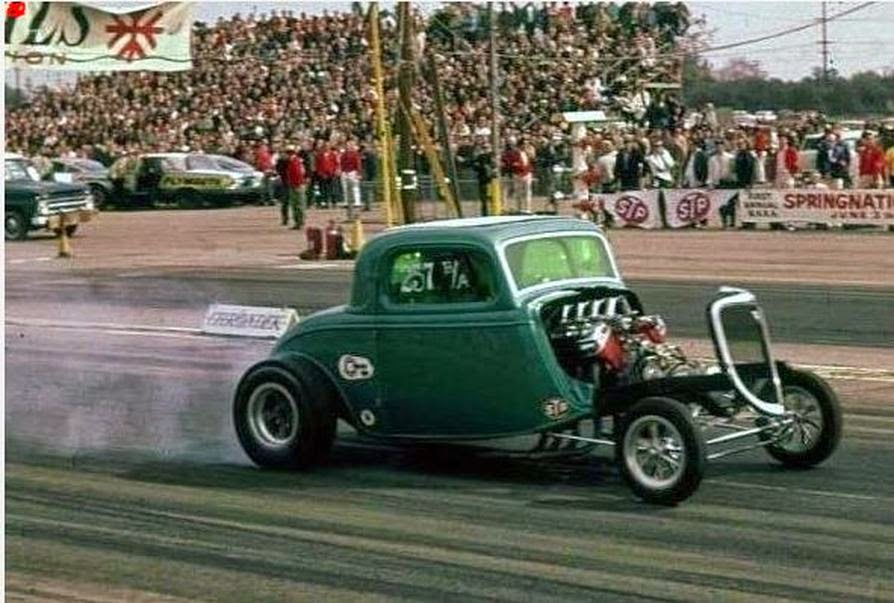