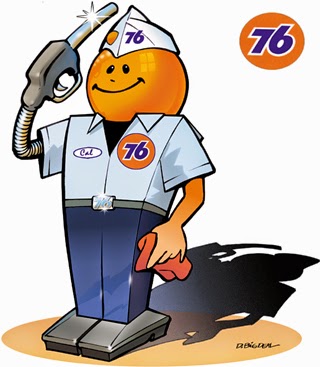 This is Fillup Phillip. Dave Deal concocted him in a fruitless effort to polish Union 76's tarnished image during the so-called oil crisis of the Seventies. Today I find Phillip to be a fine representative of my current condition: A bit stiff, and bloated with fumes, but still smiling. (Image courtesy of Dave "Big" Deal)

For the tenth year in a row, my girlfriend Shellski and I have endured brutal April Fools deadlines. We both have several deadlines to meet in the course of a year, but the April ones seem to come at the worst possible time: April. We spend our winters pushing unpleasant tasks aside until April, then must face the consequences of our procrastination. Gack! Last week's abbreviated blog post was written under duress due to that setup, whereas today's post was composed in the fragile course of the recovery process. Shellski and I both have full and rich lives outside of our work, which often leaves us baffled at how the hell we stuff it all in. So I've retraced my last week's steps in search of some insight. I found little to explain my fatigue, but please let me know if you notice some kind of red flag pattern here, okay? Thanks. 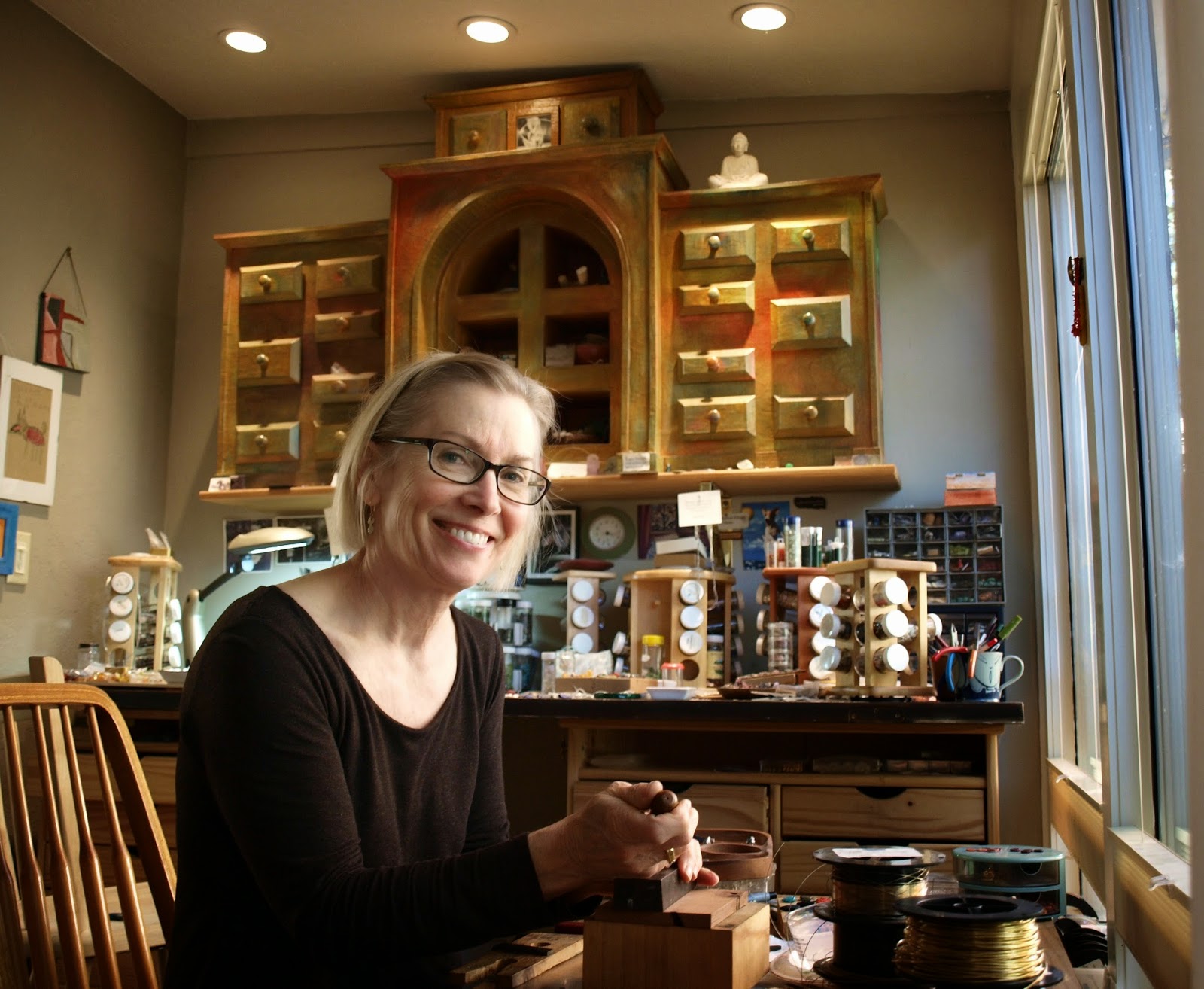 Sunday morning in Shellski's studio. Shellski is a jewelry artist. She's been at it a long time, and is very good. Consequently, it's hard to keep up with the orders. We're both blessed/stressed that way. 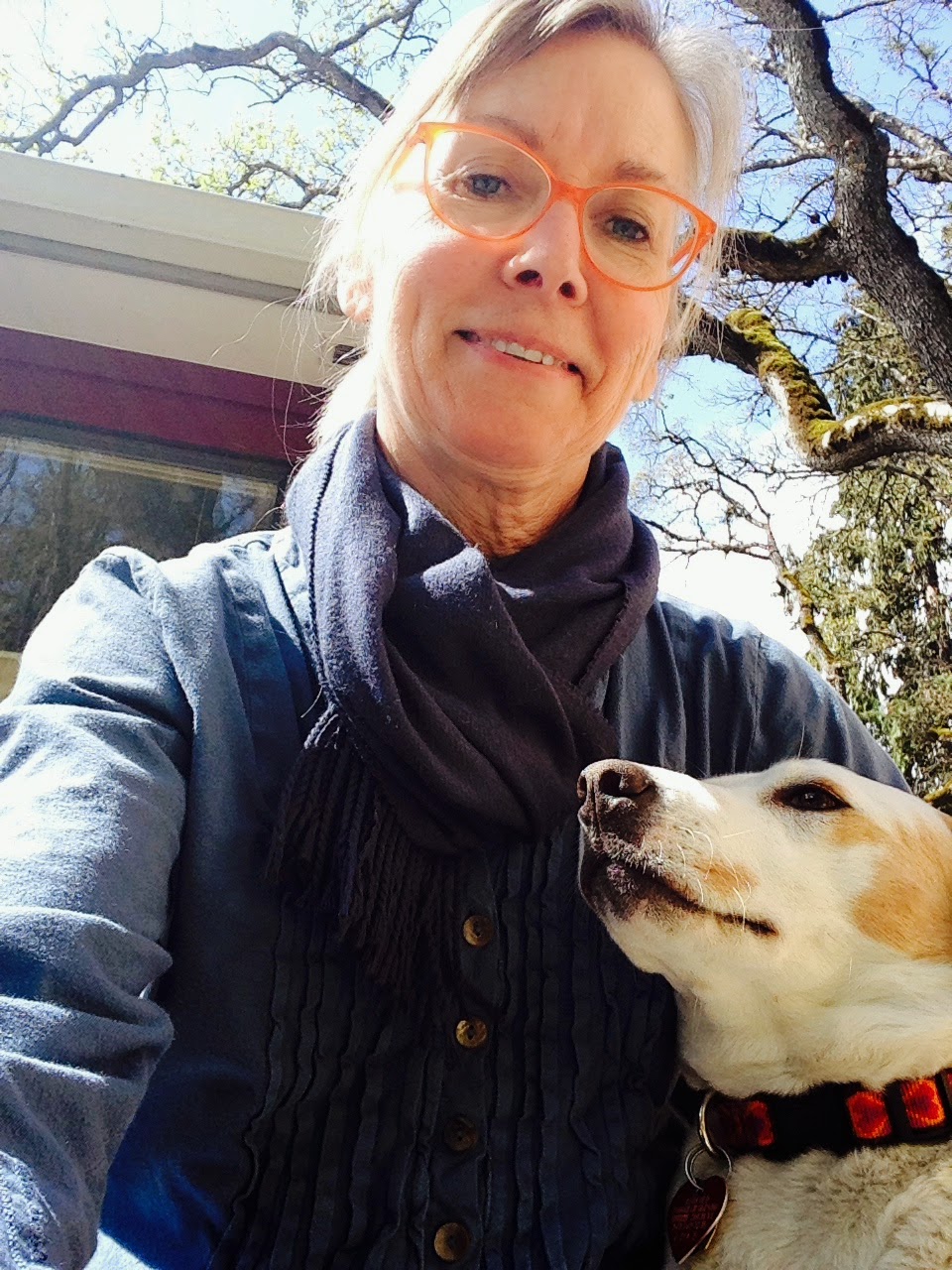 Her new dog Rosie bombed Shellski's selfie attempt as I was making a break for Dr. Lockjaw's place. I haven't seen the gals since, but have been in sporadic telephone contact. They blew town to visit relatives in California for Easter. Last week's post covered my Sunday visit to The Doctor's office, so we'll jump forward to Monday, where I clocked into the office at 8:00 AM. 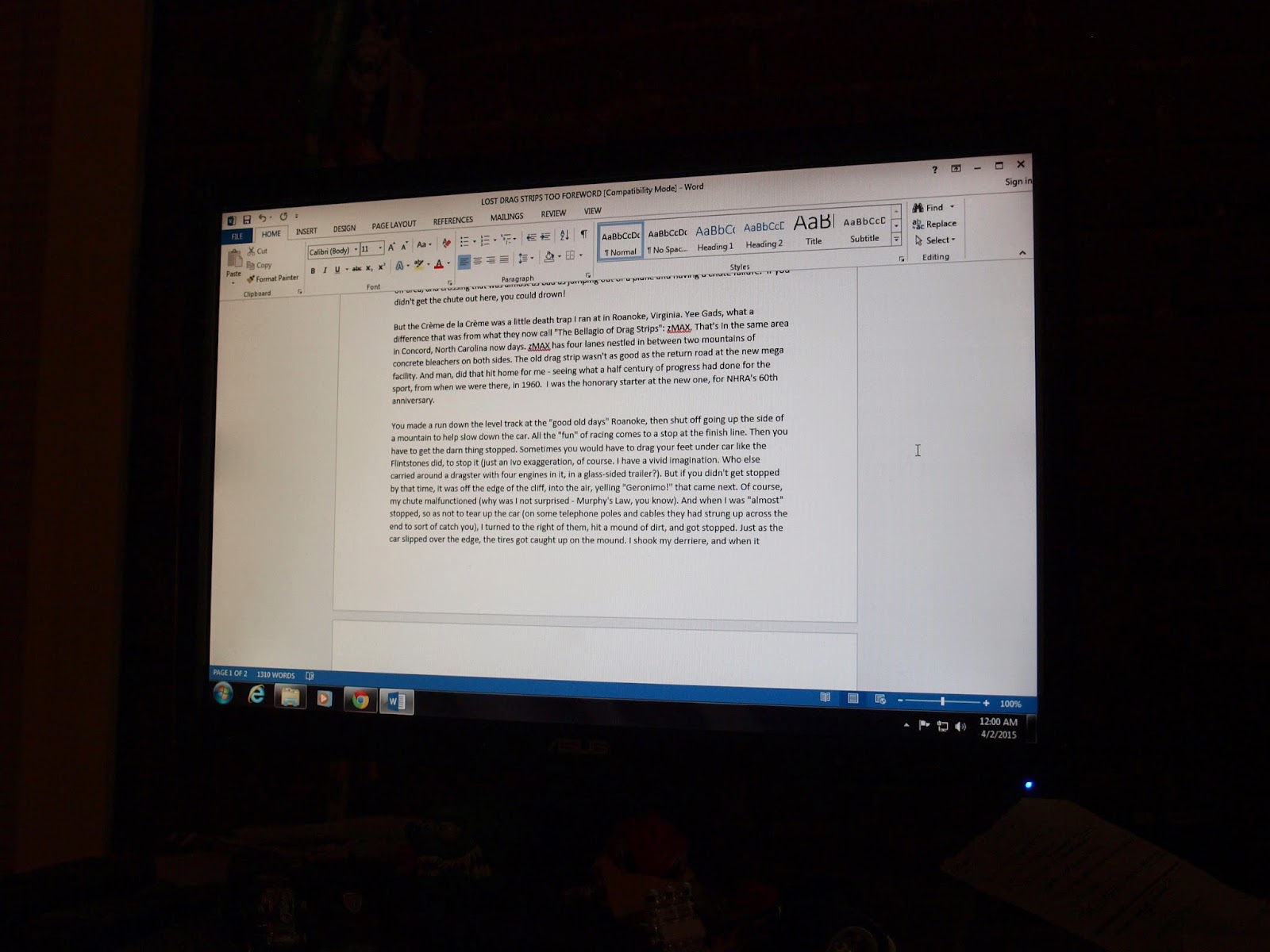 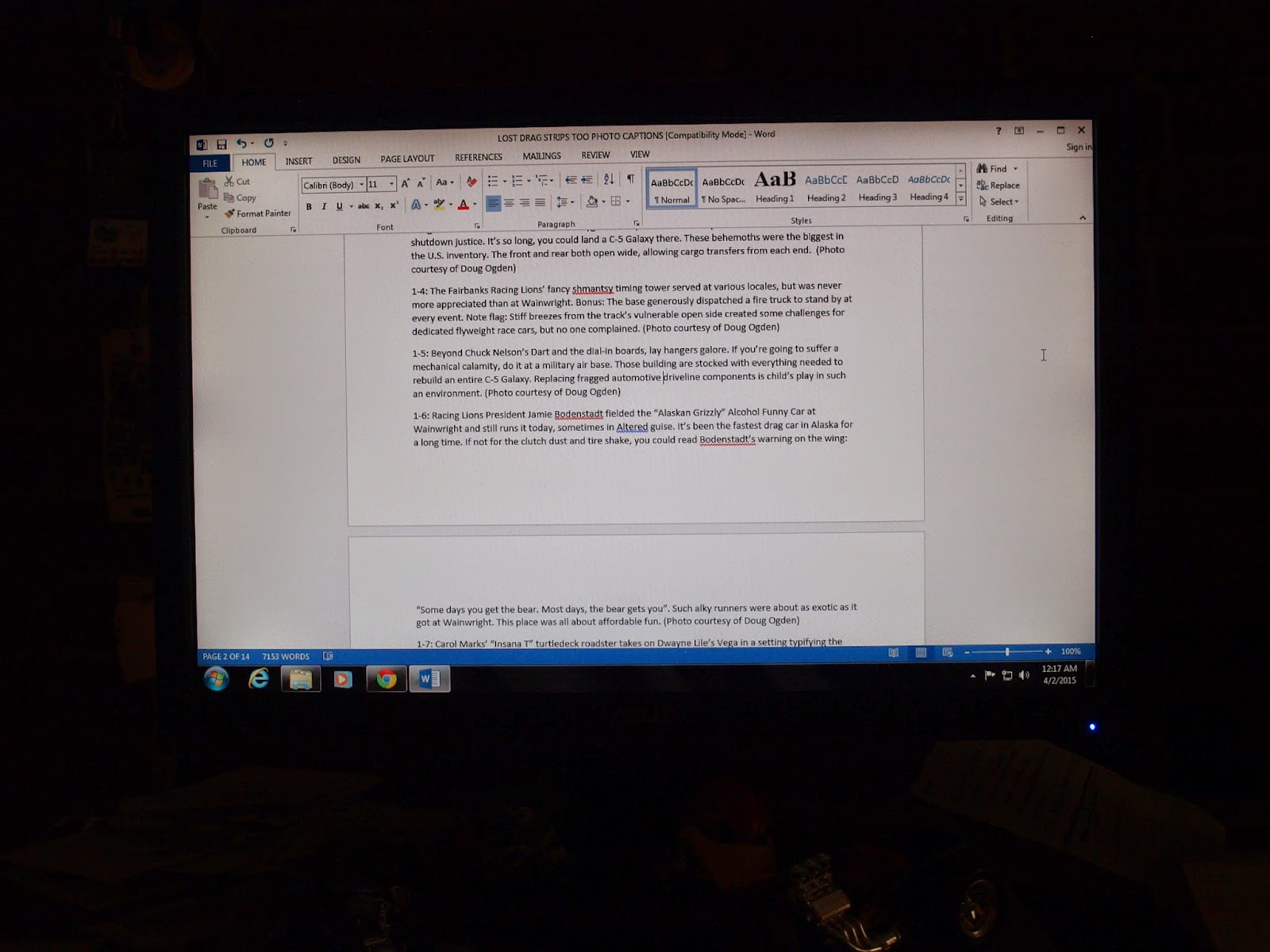 Late Monday night. Body text and photo captions done for the latest CarTech deadline (for the halfway point of the book). I knew it was about deadline time when the words began swimming after each other across my electronic aquarium. Hallucinations are mesmerizing fun! 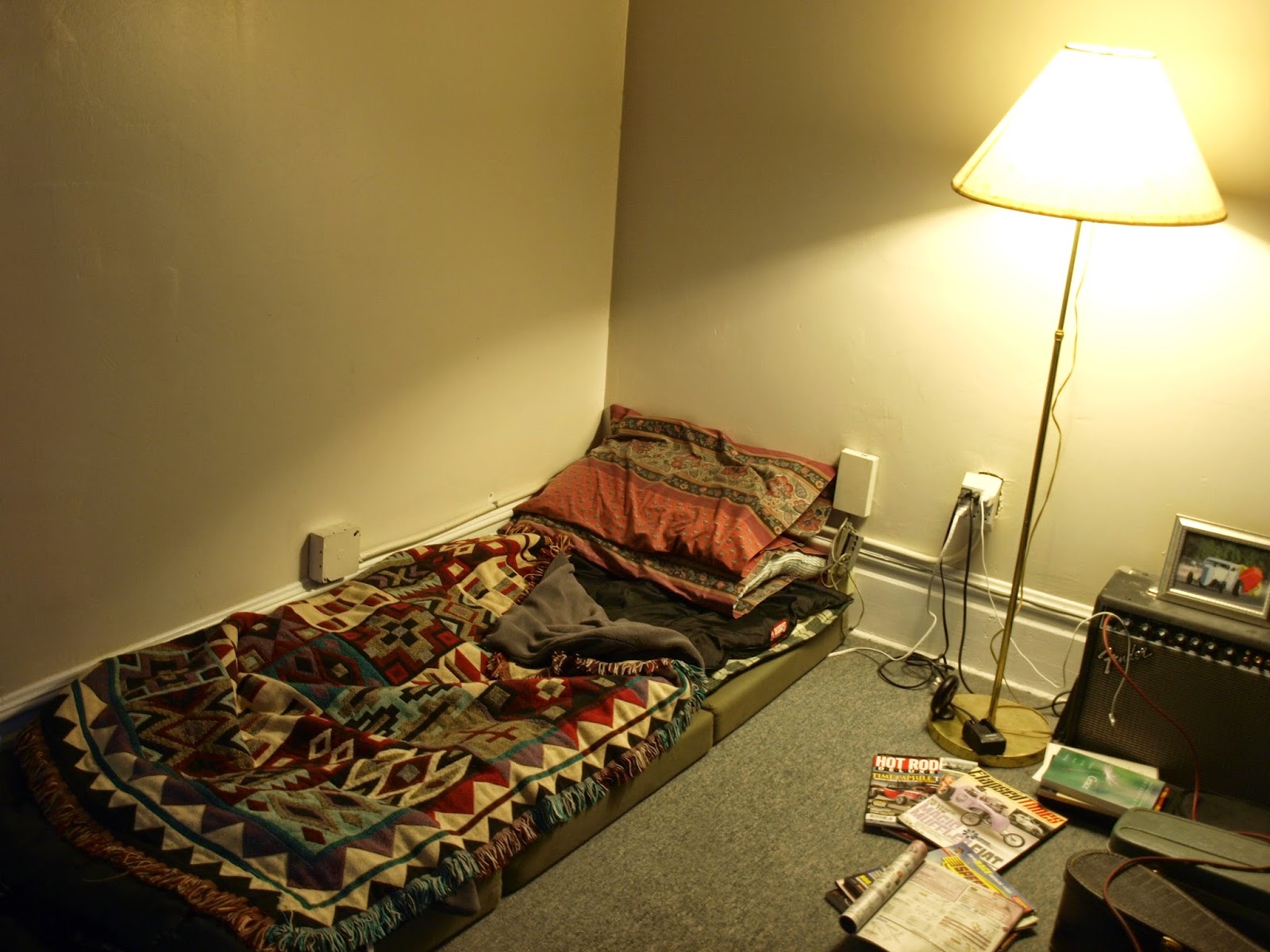 Later Monday night (nearing sunrise). My reward for surviving another deadline. Be it ever so humble, that little bed is a mean Z machine. Tuesday morning. Thirteen hours of sleep later, I'm back on it, but just chugging along in first gear. 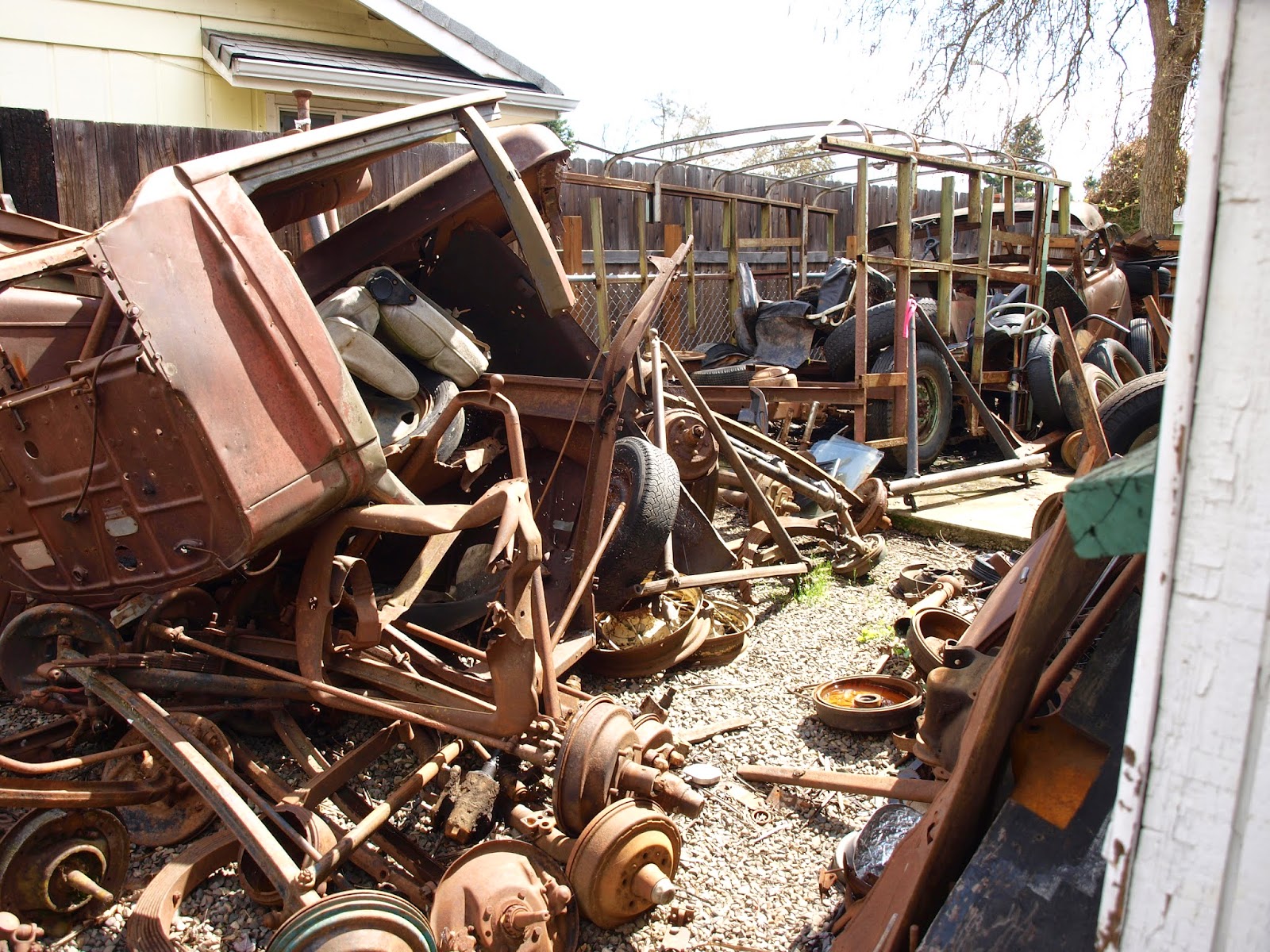 Tuesday afternoon at Harvey Foster's house, scrounging for a tapered, splined and threaded steering shaft, so I can positively attach the steering wheel on the SGE Model A. There should be one in there somewhere. As it turned out, there were several, but only one like I needed. And Harvey knew right where it was. 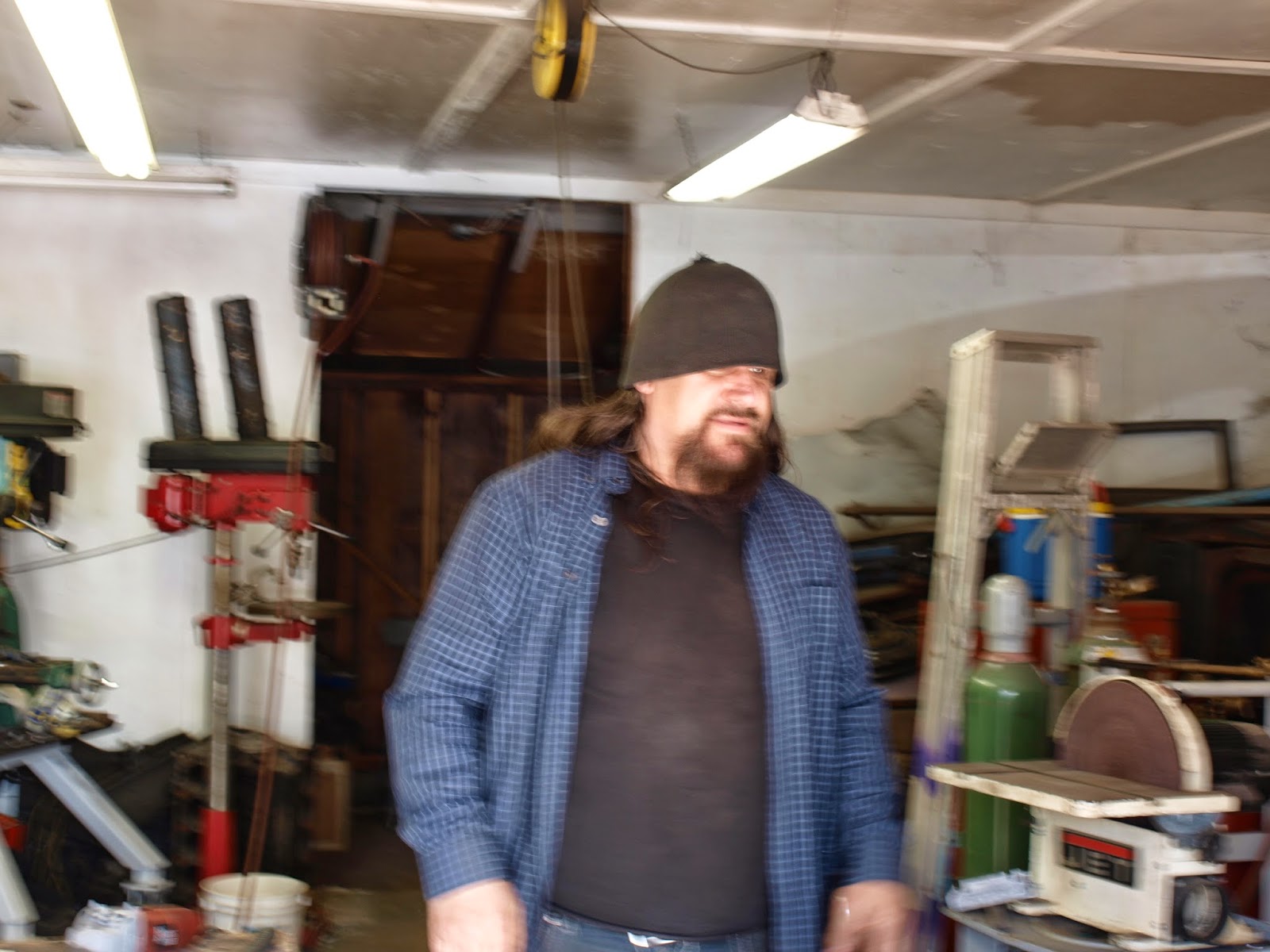 Harvey never lifts. This is as slow as he goes, and it's just too fast for me to keep up (that obviously goes for my archaic Acme camera, too). He's driven by an operatic love/hate relationship with rust. He buys the stuff by the ton, then grinds it all away. 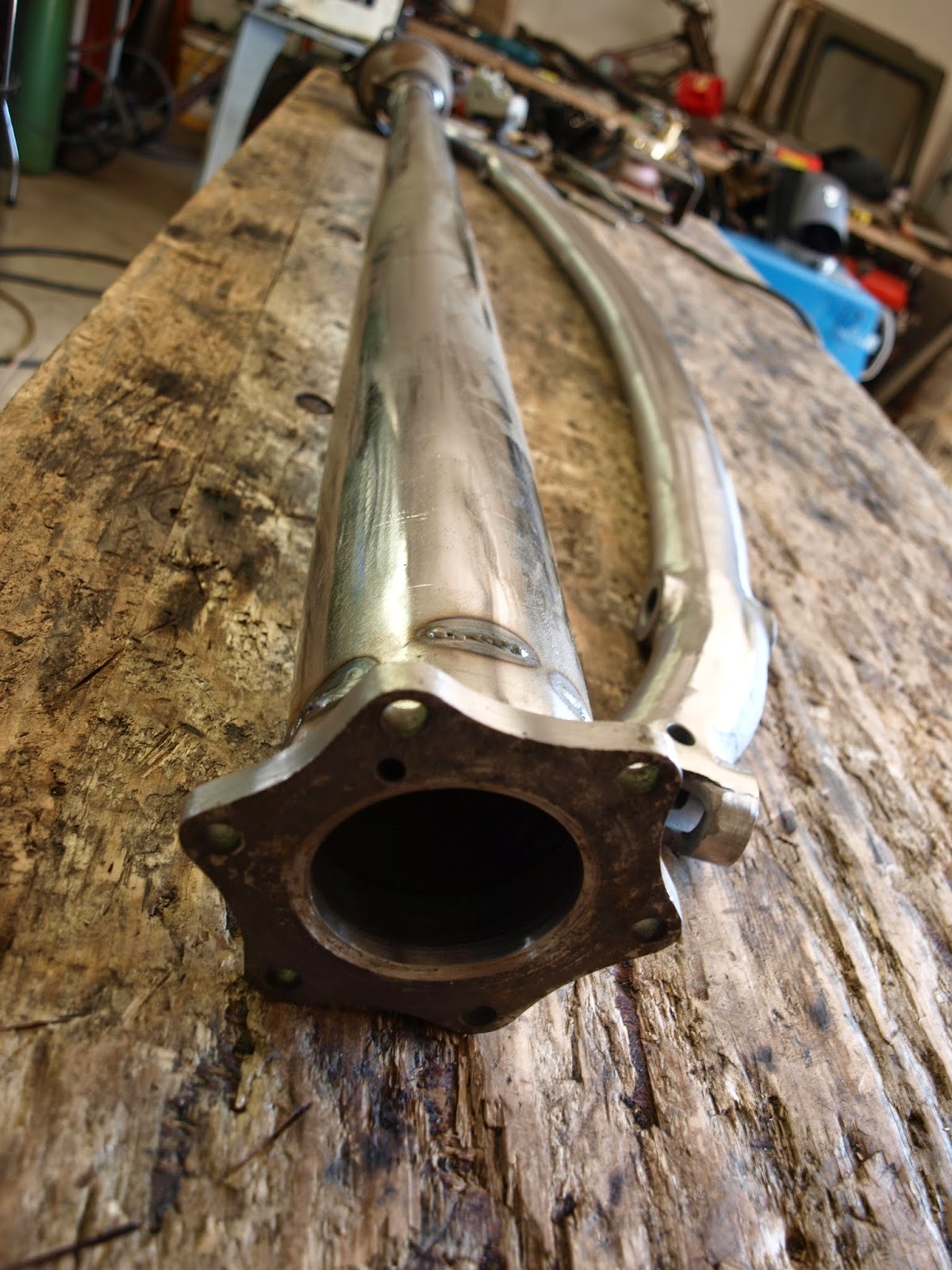 The roughed-in '36 Ford torque tube and axle are typical examples of Harvey's work. He spends ungodly hours polishing this stuff for customers around the globe. 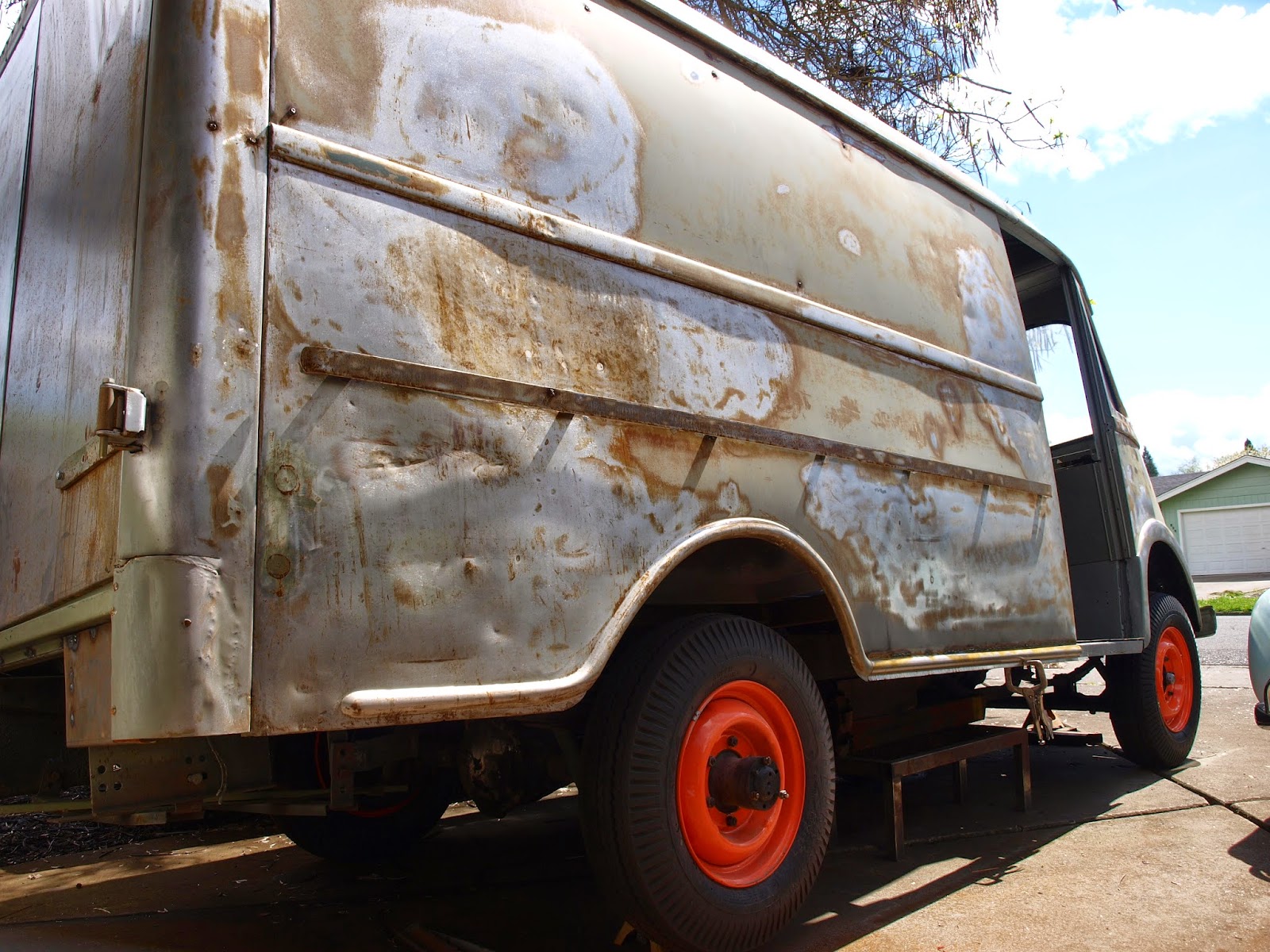 Harvey recently took on this epic sheetmetal job. He started at the rear and is slowly working his way forward. We'll check back with you next year, Harvey. Thanks again for giving me the (steering) shaft! 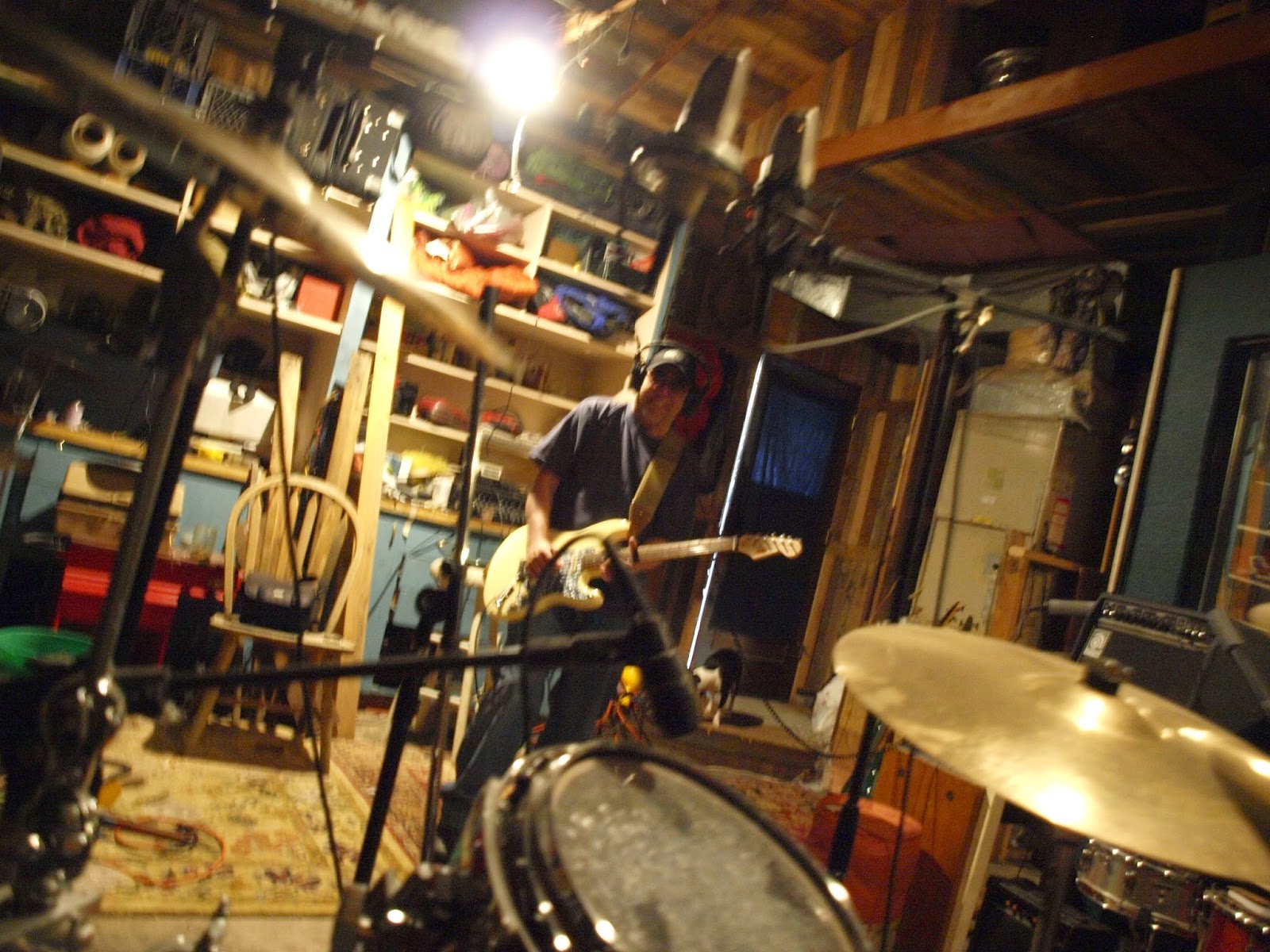 Wednesday was one of those fruitless research days, but that evening found me back at James Drive Studios (Rob James' one-car garage) where the new Scotty Gosson Combo album is being recorded. Rob somehow caught this image of me shredding while he was going all octopus on the skins. The guy is amazing! We now have the basic tracks down, and will begin mixing soon. Meanwhile, uber badass hot rod artist Jimmy Smith has provided uber badass cover art for the album! We're so stoked! Wait'll you get a load of this imagery... 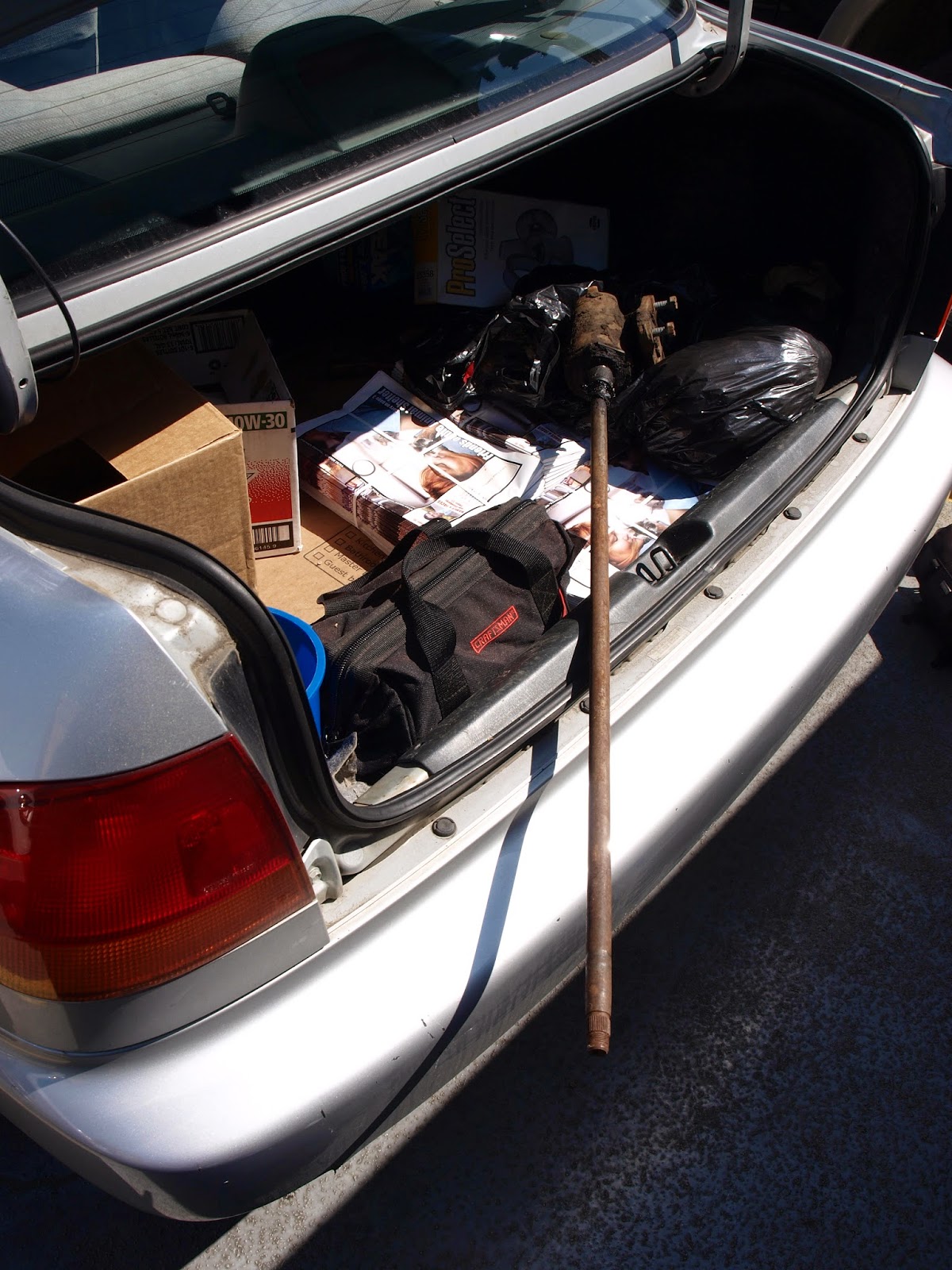 Thursday was another dry day of research (so it goes), but I enjoyed my lunch break: Instead of a shop, I have a space in a parking garage (yes, my urbanization is now complete), so that's where I went for therapy. The steering shaft I got from Harvey was a tad rusty, so I spent a few minutes cleaning it up, as crusty parts are not welcome at the Custom Metal shop, where this thing is headed. Note steering box at other end of shaft, leaking black grease throughout trunk area. 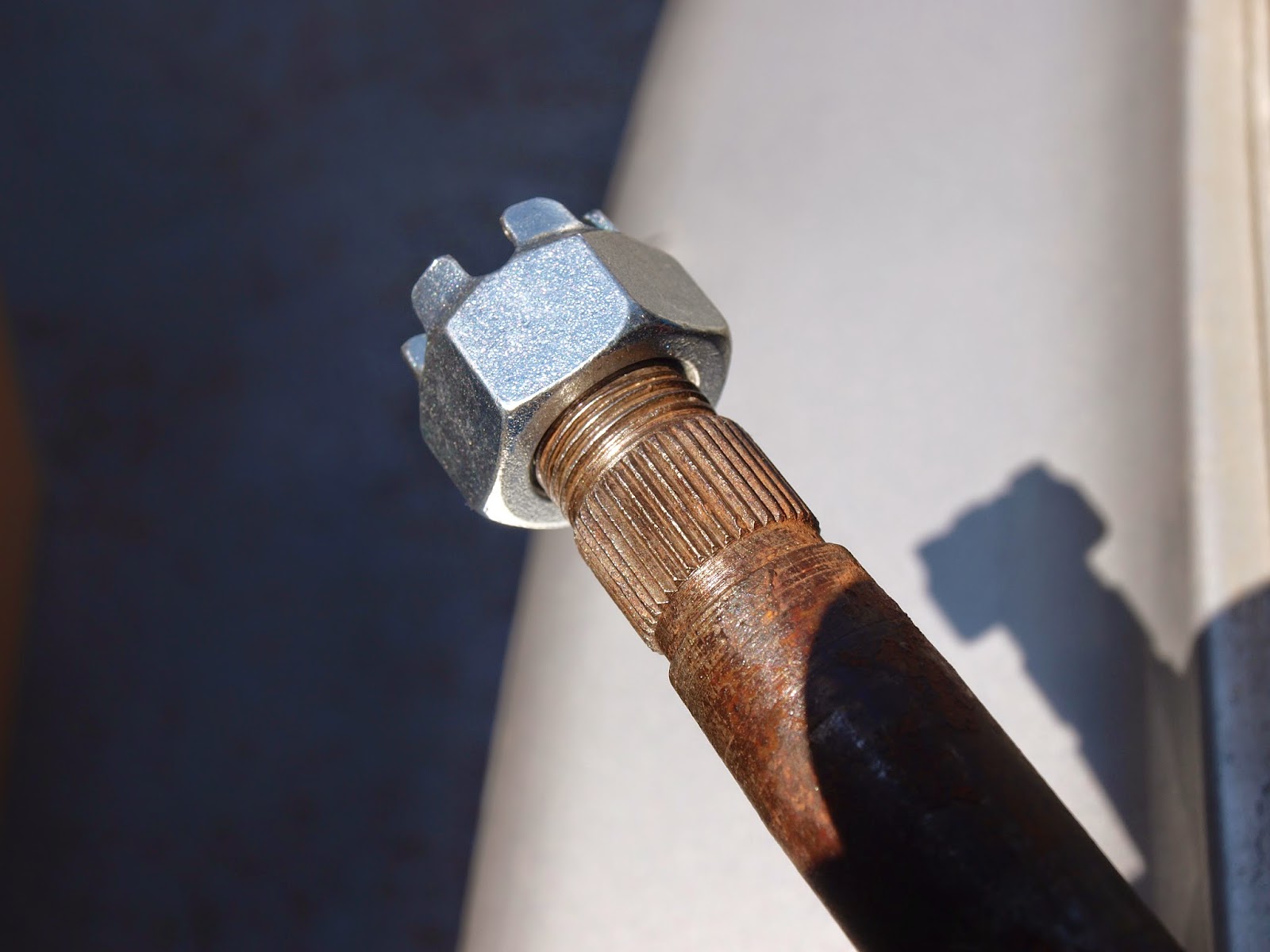 Despite suspicious glances from fellow paying parkers, I was able to remove the top layer of rust with my trusty battery post cleaner, allowing the test nut to engage almost halfway before hitting a mangled thread. Having left my tap and die set in my other pants, my work here was done. And that's about as interesting as Thursday got. 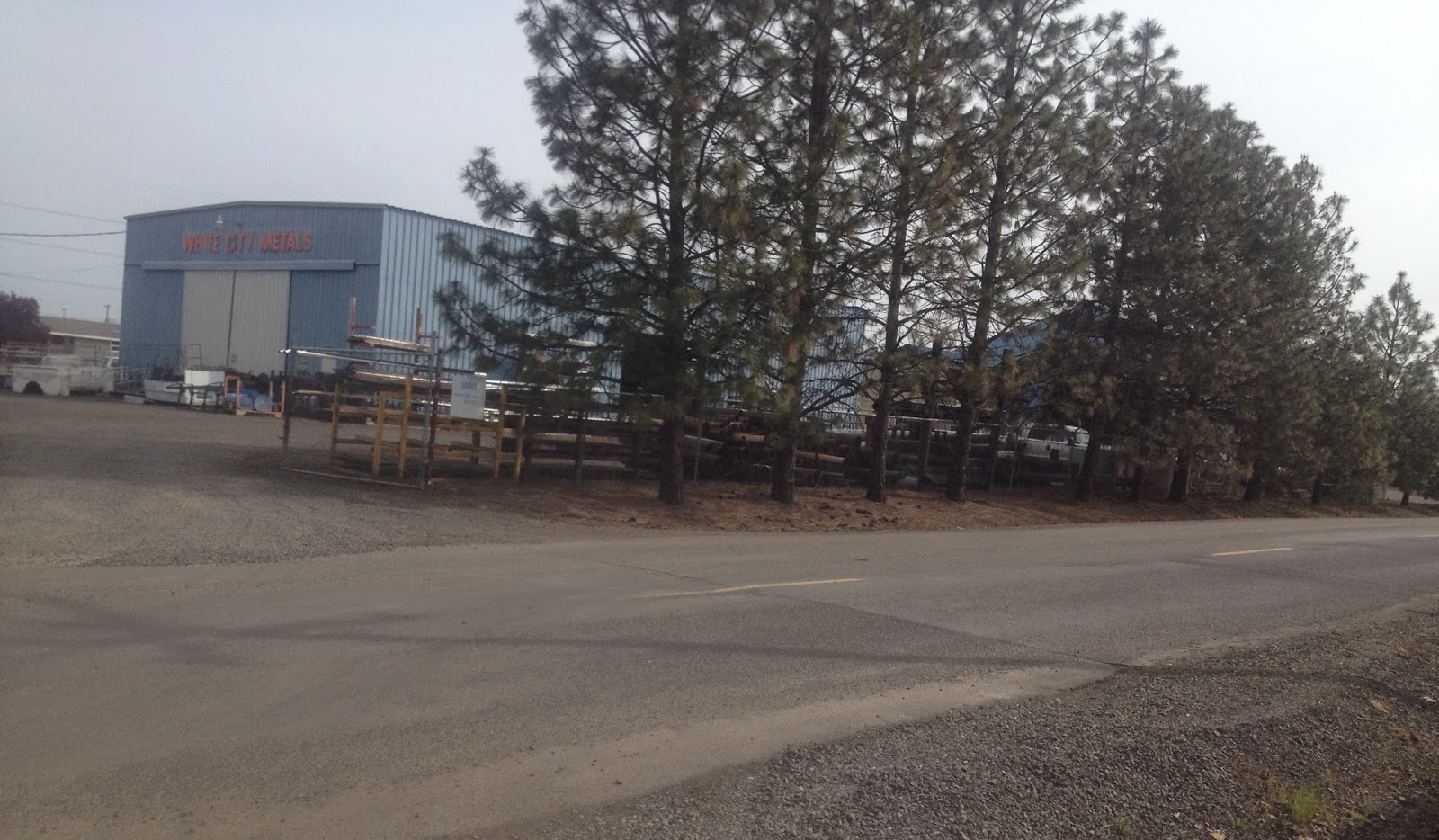 On Fridays, I deliver print periodicals around the Rogue Valley for supplemental income. My route takes me right past the evil White City Metals (they might as well sell crack), so I pulled over to check my list of materials needed for the Model A project. The list was long, but the budget was short, so I moved on. 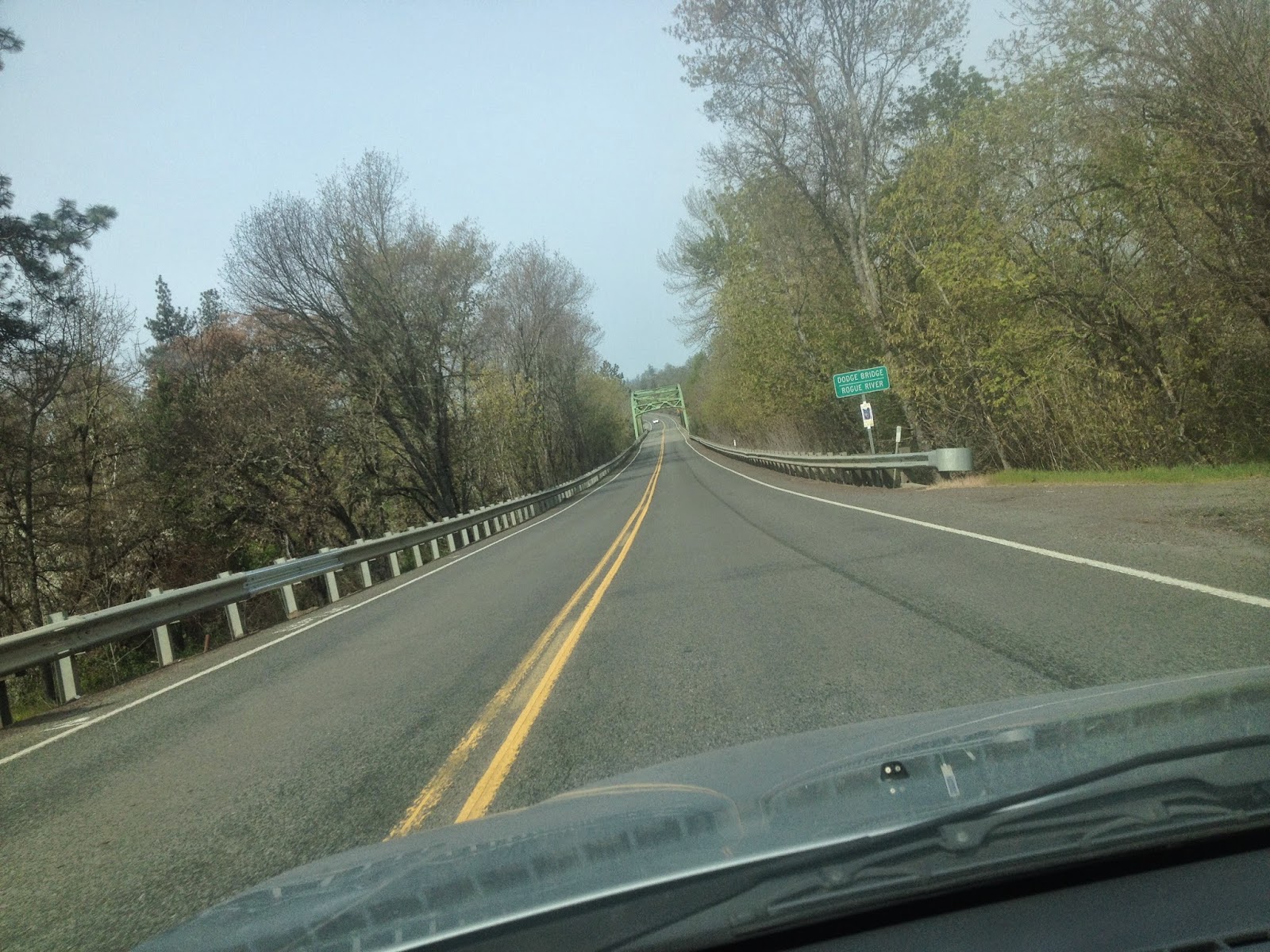 From the blue collar industrial White City, I headed to rural Sams Valley, which is always a refreshing break from the grind. 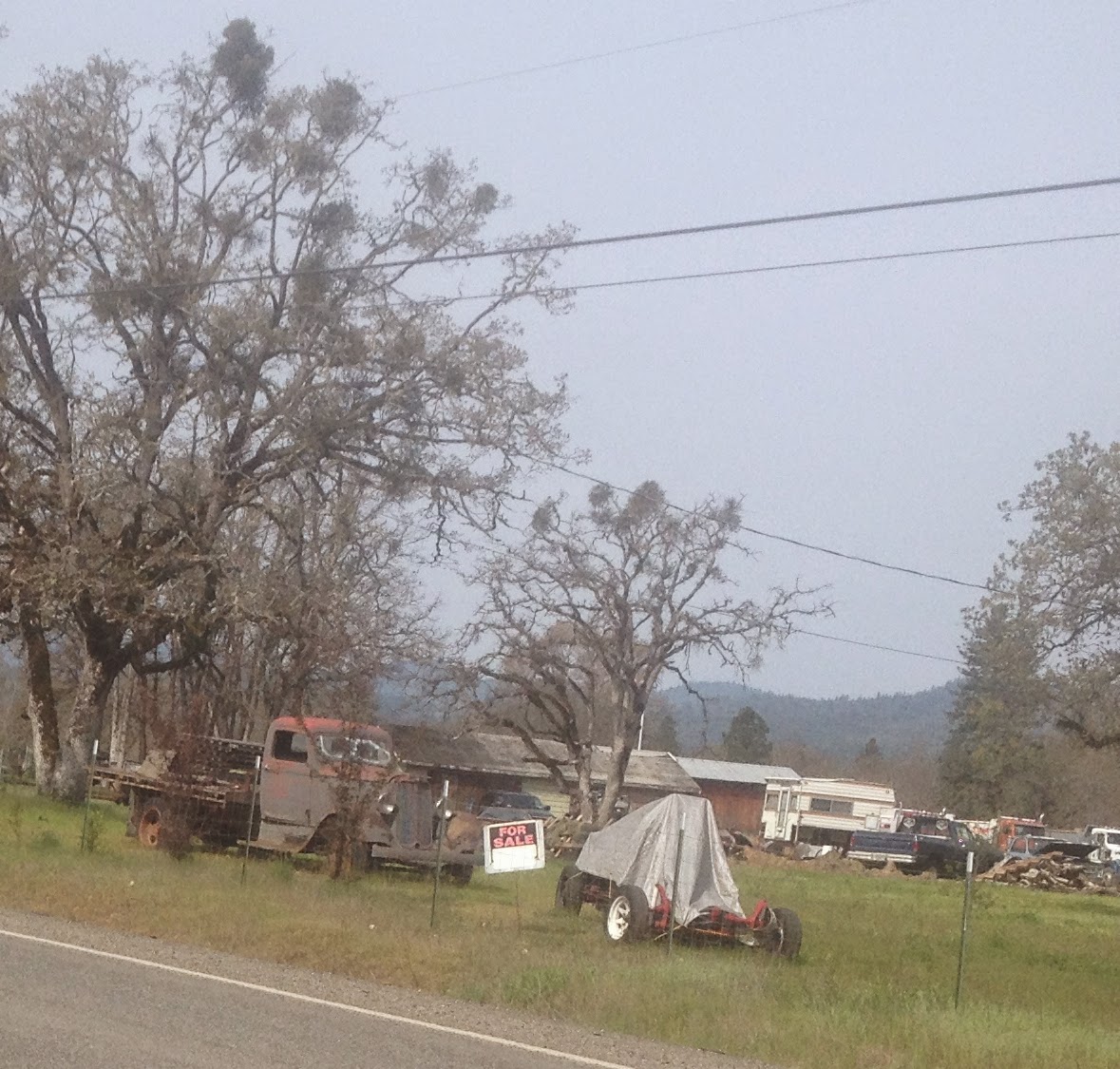 Back in town, yet another truck spotting. 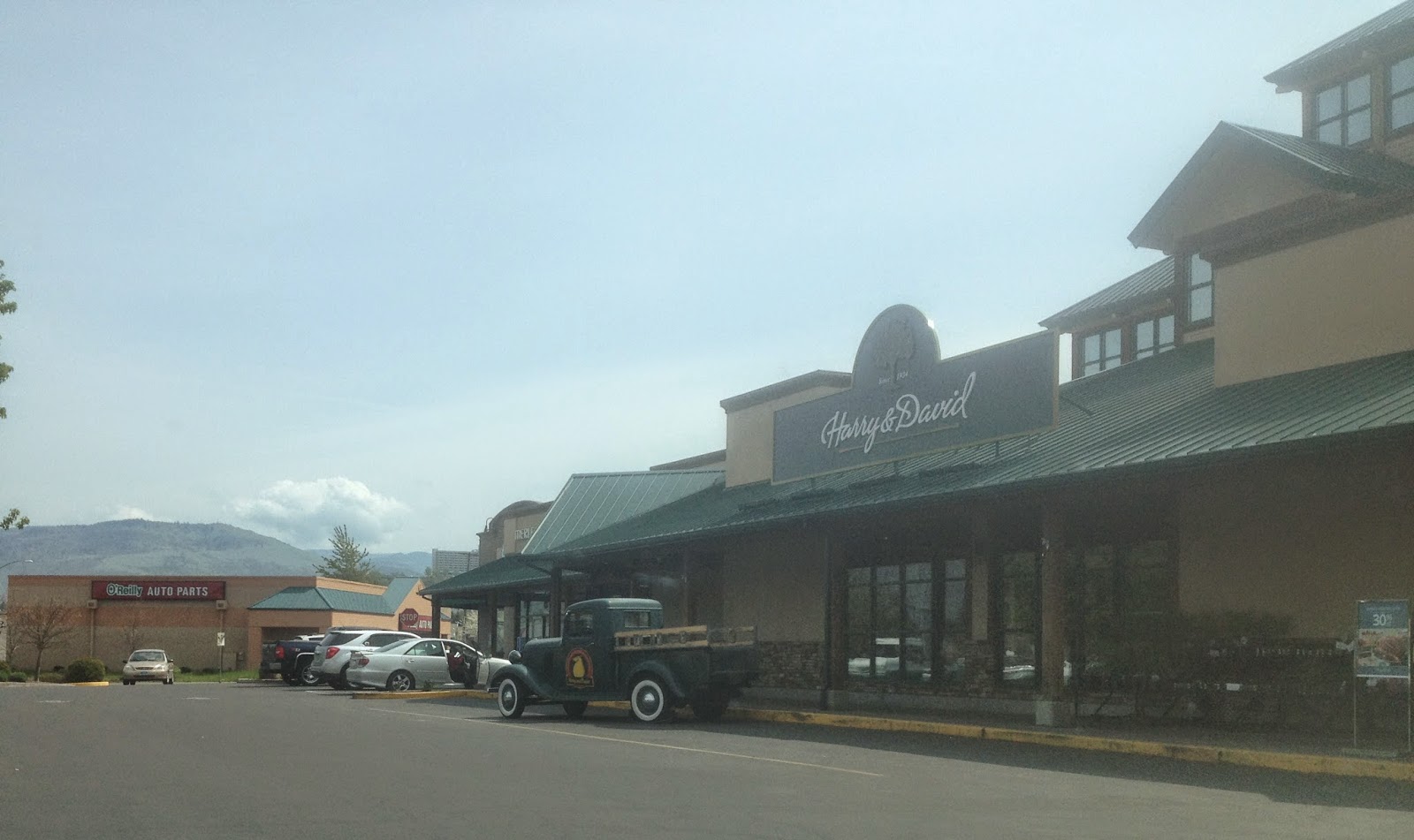 Dang. I hit the truck jackpot on Friday. 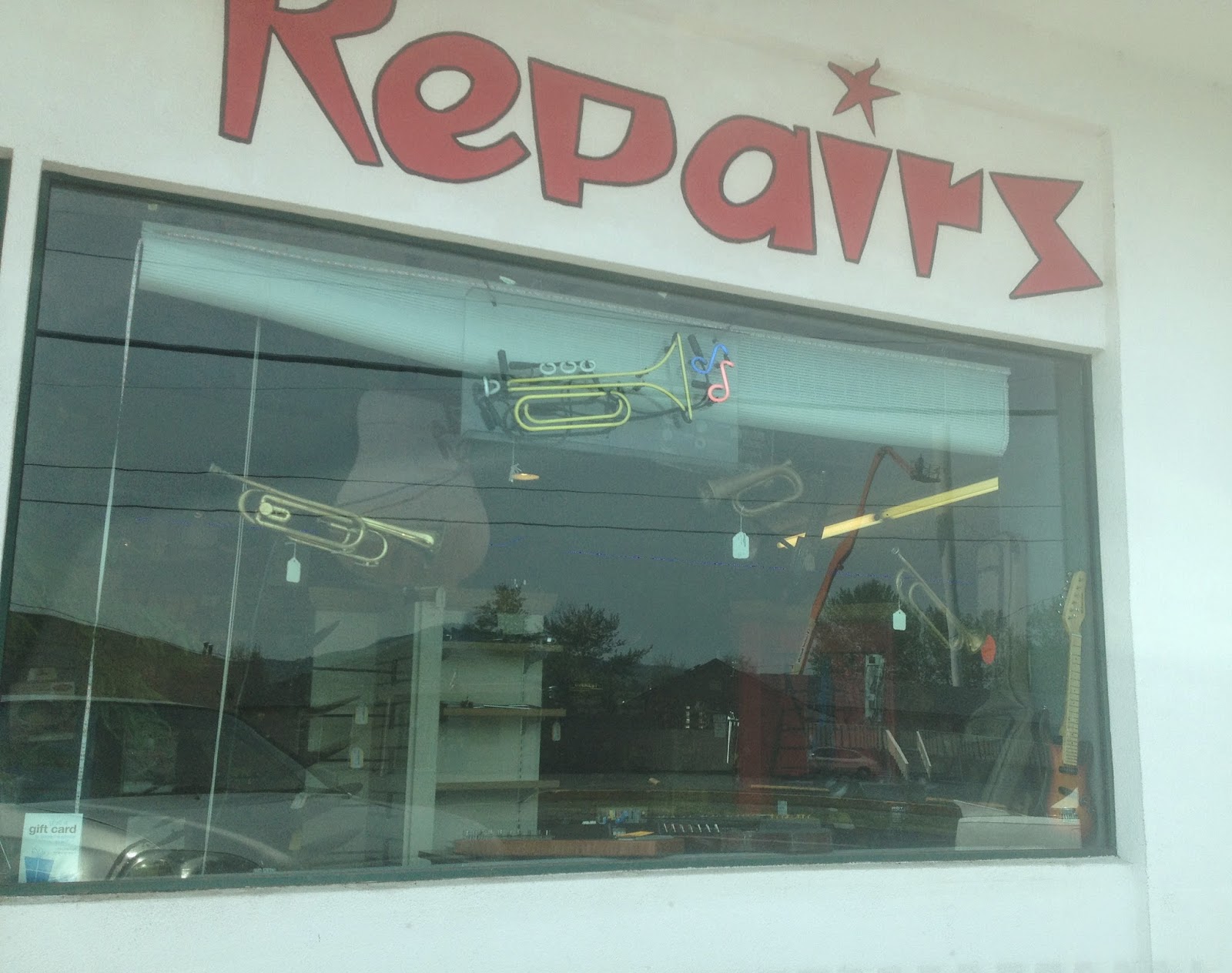 Tom's Guitar Shop happens to be on my route, so I always take a minute to check the inventory and benchjam with the crew. This is a dangerous stop for me. It's slippery in there, if you're scoopin' what I'm poopin', Jackson. 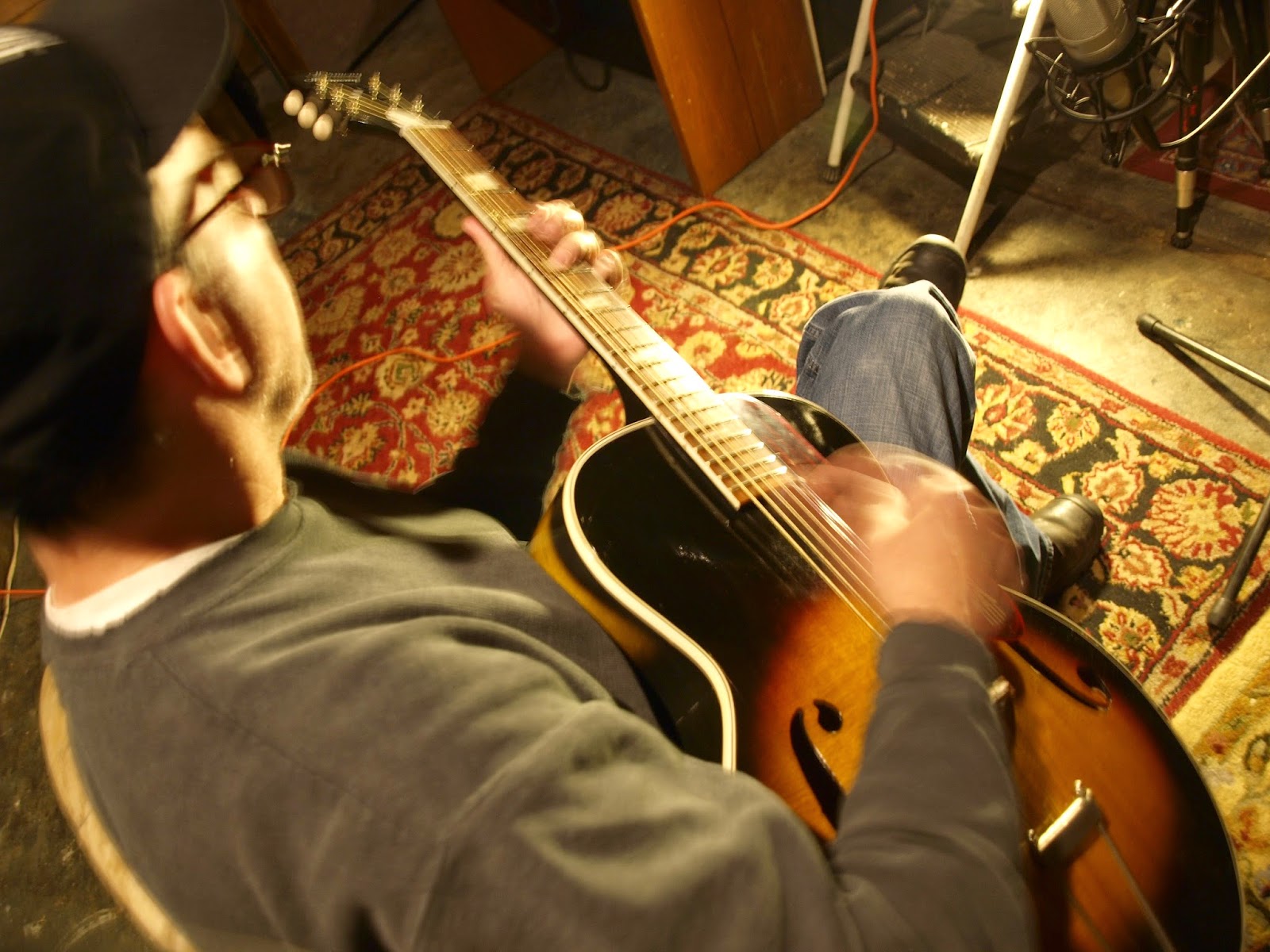 Friday night it was back to James Drive Studio for a last minute addition to the new album. Six months ago, I began making payments on this '56 Harmony archtop and finally got it paid off (thanks to Tom's Guitars' EZ Payment program). I've been dying to use it on some swing numbers, and am stoked to report that it plays like a dream and records even better! 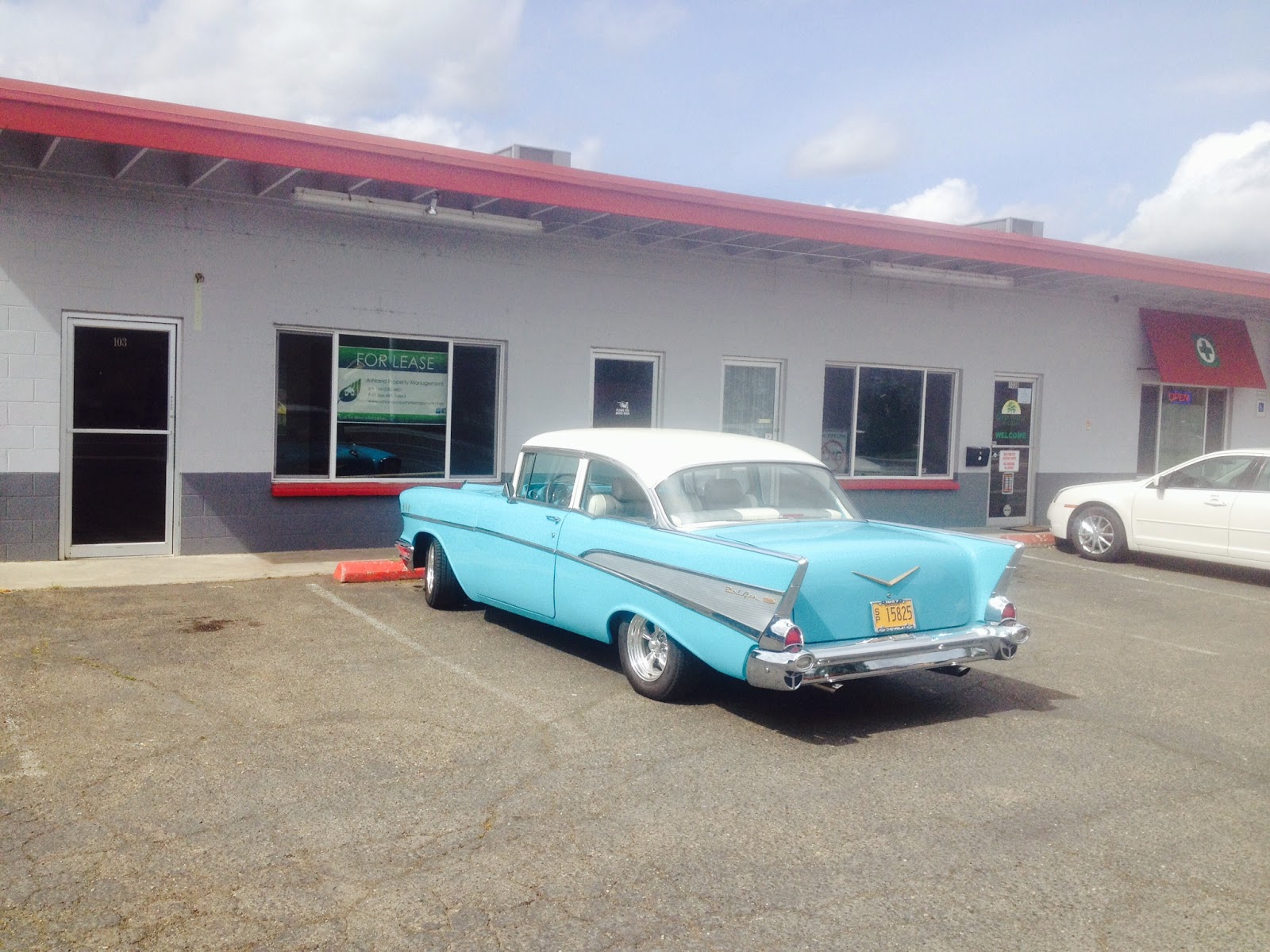 Saturday morning, it was back on the road to finish the delivery route. I spied this '57 'brown sedan" waiting for the liquor store to open in quaint Talent, Oregon, a former bareknuckle berg, currently enjoying a renaissance as an arts community.

From Talent, I buzzed over to the 1840's gold mining town of Jacksonville. The main drag (seen here) is pretty much unchanged, while the rest of the town has sprouted quasi-retro-styled new housing in recent years. J-ville is the finish line for the route. I went home and wrote a few paragraphs for the book, then blasted over to Shellski's place to provide security while she and Rosie are out of town. 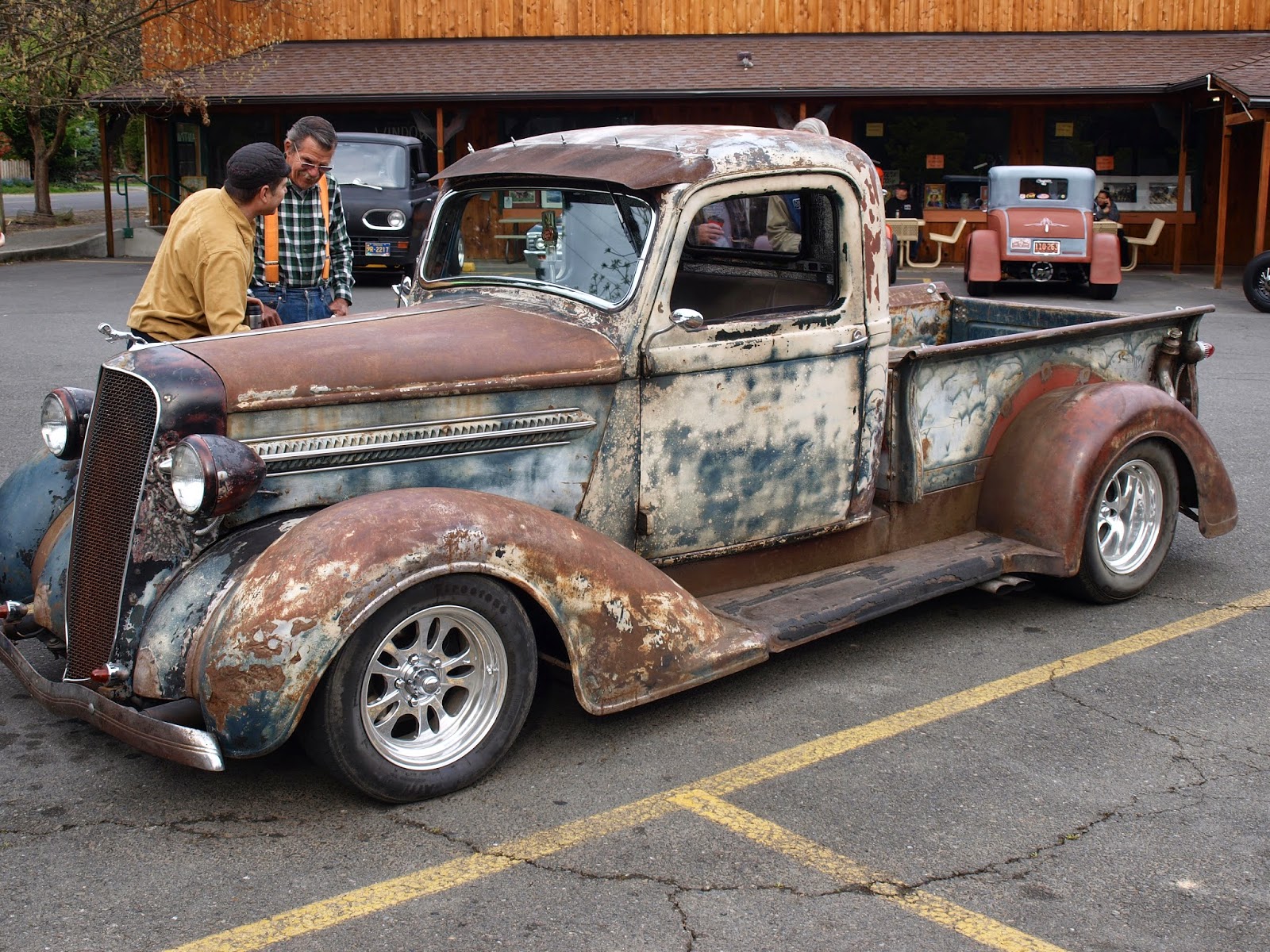 Okay, I give up. It's Truck Week on the blog. This Dodge jumped out at me while driving through Jacksonville en route to Dr. Lockjaw's place on Sunday morning. The young builder (left) gives hot rod legend Rotten Roy Wiltse (right) the tour. The old Ram had some fun elements. 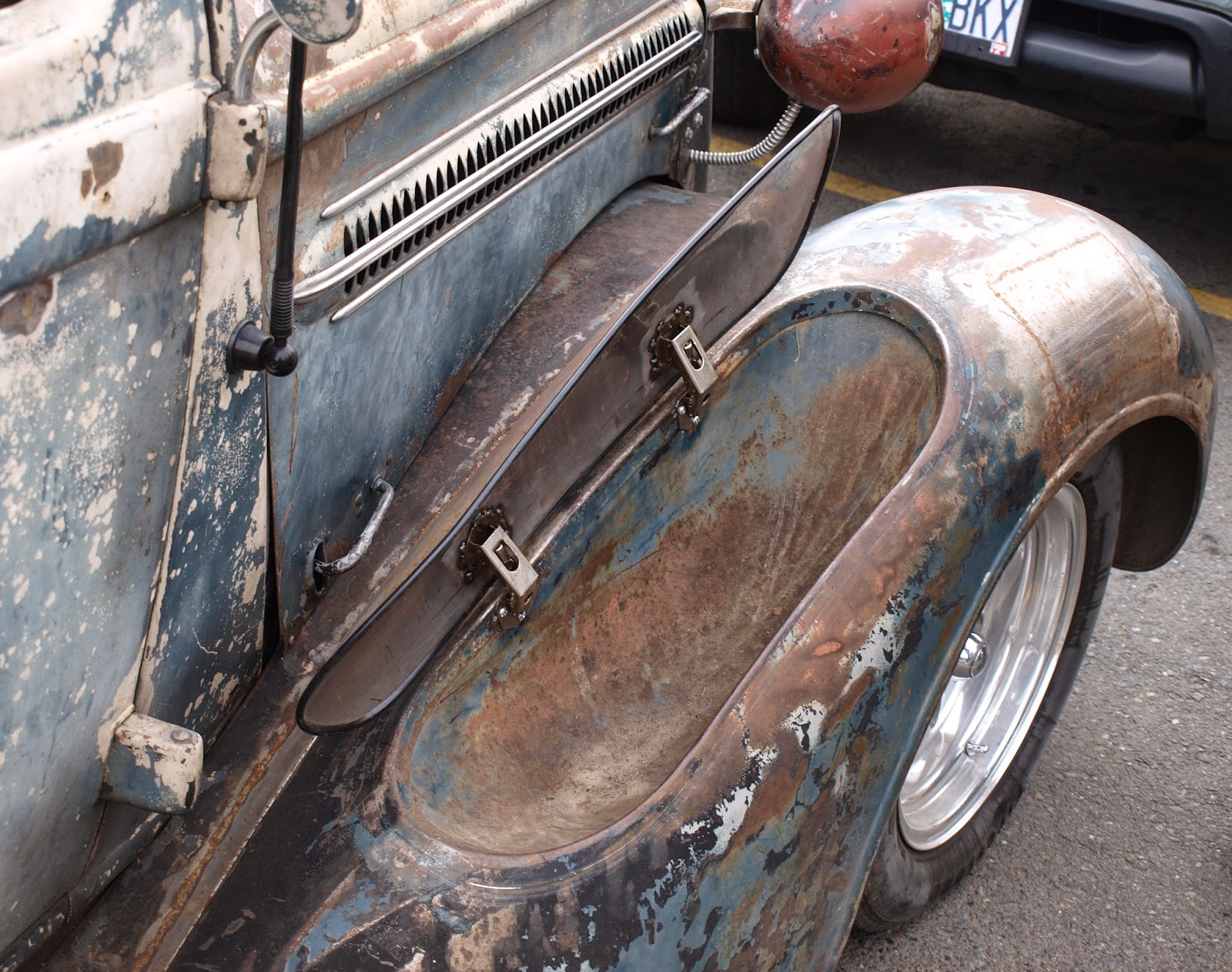 And I liked this approach to dealing with the spare tire well. Bonus points: The guy's dad bought the truck new from a local dealer. It was retired to his field about 20 years ago, with an agreement that the kid wouldn't touch it until the dad passed away. That happened about a year and a half ago, and here we are. 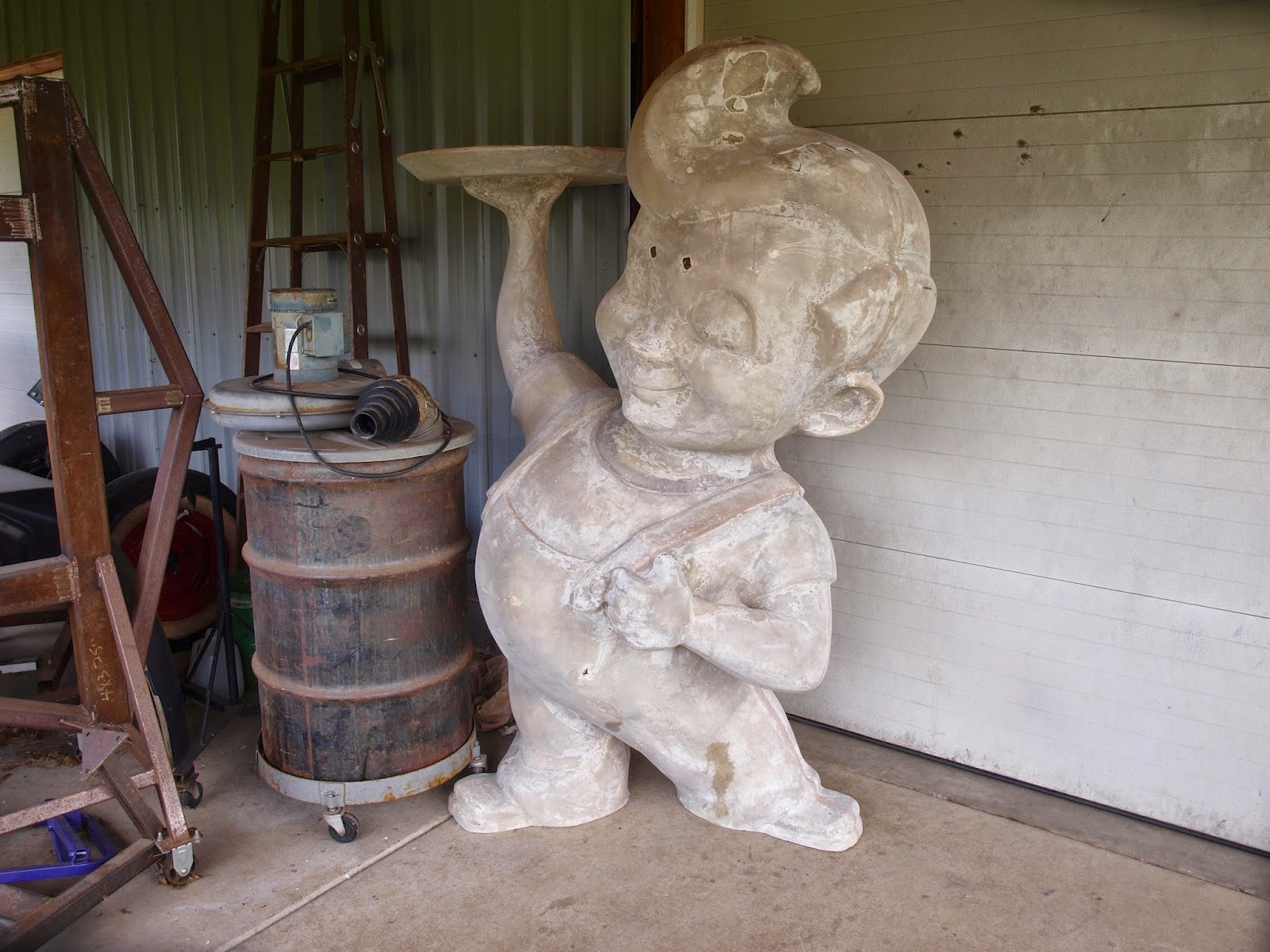 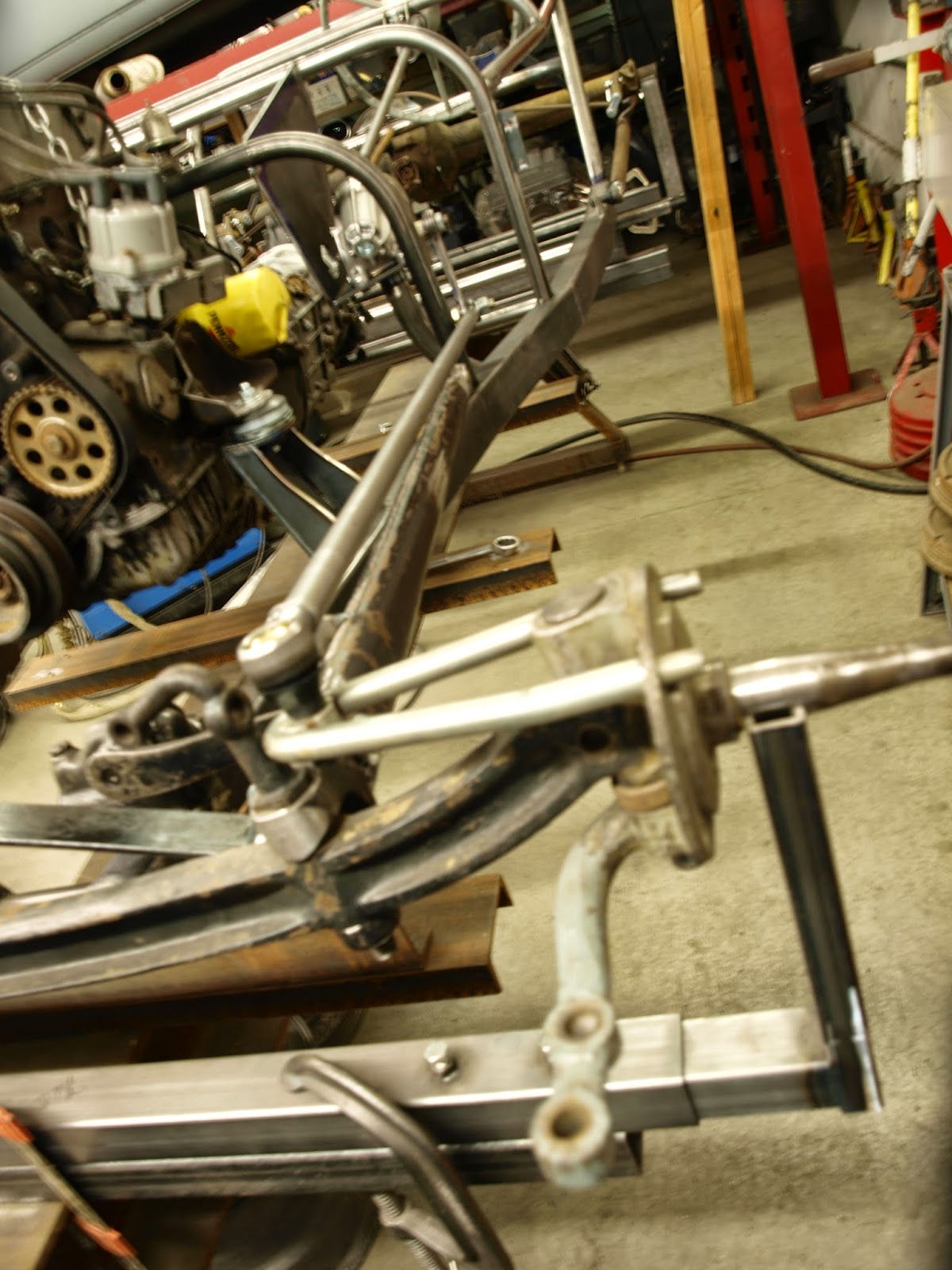 Despite our best intentions, Easter activities cut this week's fab session short. We determined the steering wheel was incompatible with the shaft I got from Harvey, and a Speedway Motors tie rod end I'd bought had manufacturing defects that deemed it junk (beware!). But we made a drag link. Then my camera went wonky during the photo shoot. So it goes. We hope to add a tie rod next week, and cut some more ugly off the front suspension. 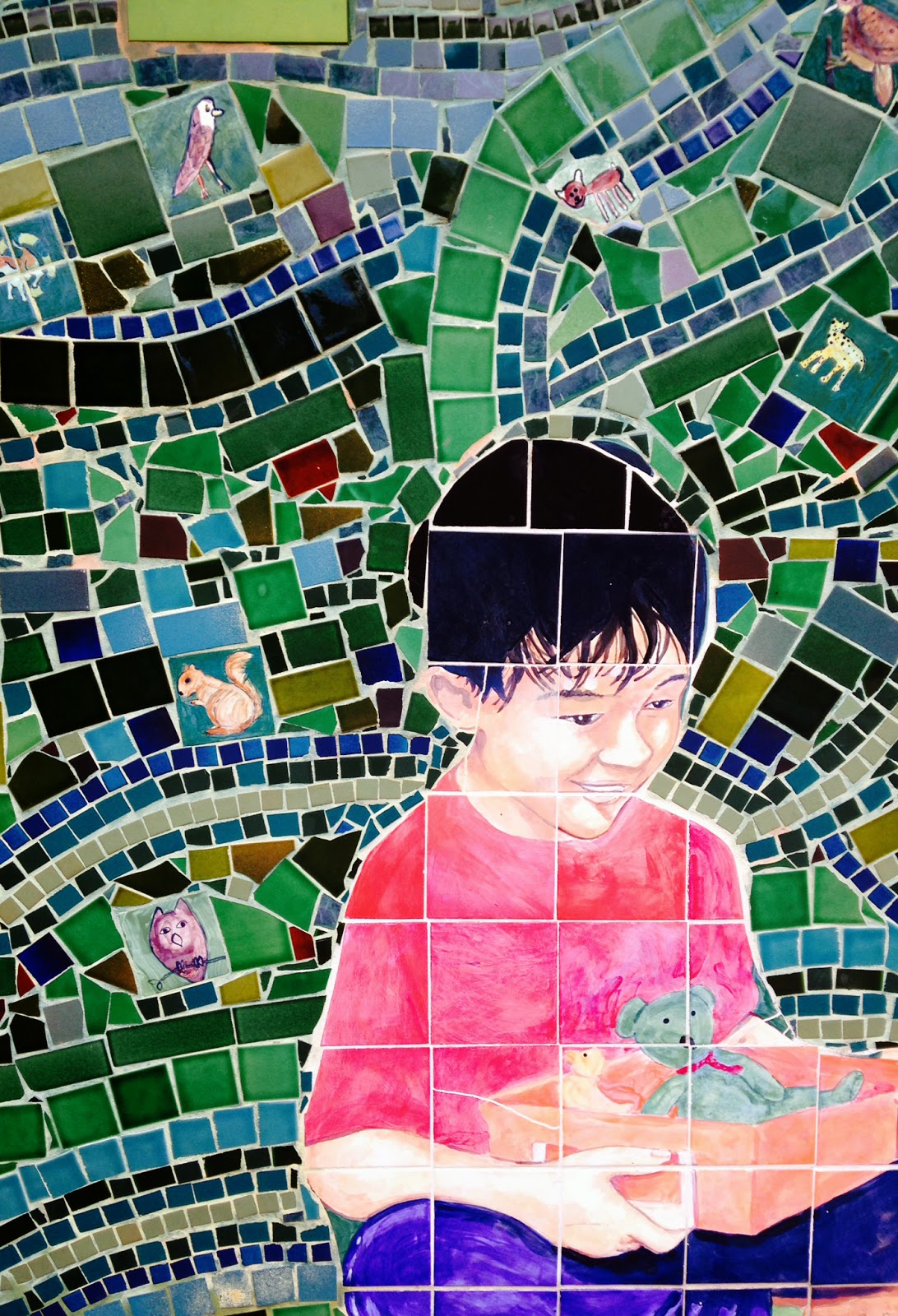 Shellski and Rosie spotted this wall mosaic while strolling through Berkeley on Easter Sunday. Can you spot the squirrel in this image, kids? (Photo courtesy of Shellski) 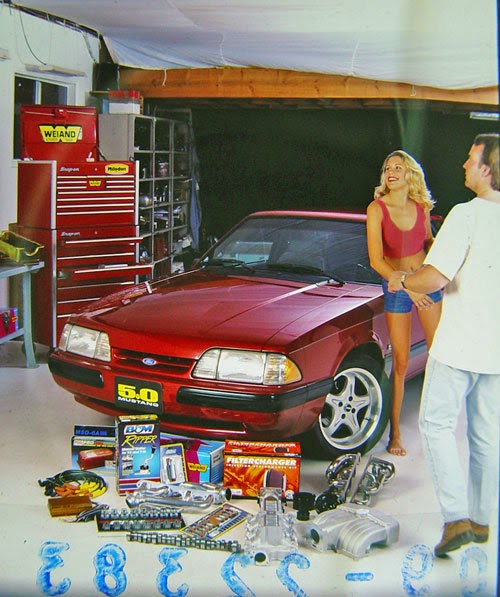 The Matt Hardesty photo shoot that landed his brother's Fox body on the cover of 5.0 Mustangs magazine. Can you spot the SnapOn toolbox in this image, guys? (Photo courtesy of Matt Hardesty) 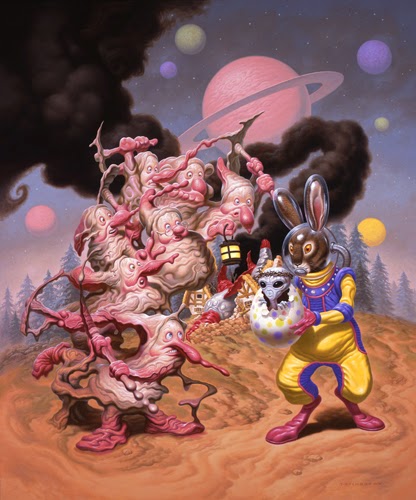 Special Easter edition Grin: Can you spot the gas station in this image? Trick question! There is none. ("When Fairy Tales Collide" image courtesy of Todd Schorr)

Posted by Scotty Gosson at 8:21 AM No comments: