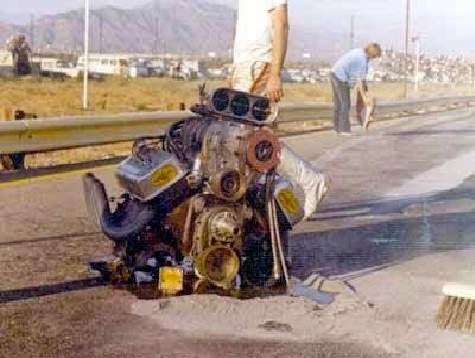 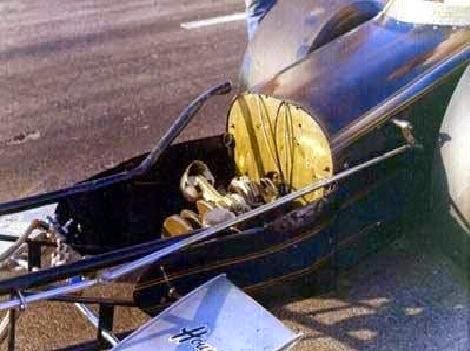 When Tom Toler's fueler spit most of its engine out onto the Irwindale Raceway strip, the thrash was on - for Toler and his ragtag crew, as well as the Irwindale track crew. This is an extreme example, but a thrash is a thrash.

All is relative. That's indisputable. Writing deadlines, pit thrashes, and birthdays all must be addressed, lest they roll over us and leave us flattened. Some thrashes are more epic than others, but again, it's relative. Perception and scale varies, while result is absolute. Whether we achieve our goal or it is flattened, the satisfaction of giving 100% trumps score keeping, in the end. That's good news to those of us flat enough to fit under a manhole cover.

I get it. I've thrashed in shops, in the pits, and on the side of the road. All of those were thrashes of survival, in one form or another. But this week, I'm hearing about a lot of thrashes to make it into the Grand National Roadster Show at Pomona, California. Foreign territory to this card carrying show hater, but maybe I'll learn something here. It could happen! 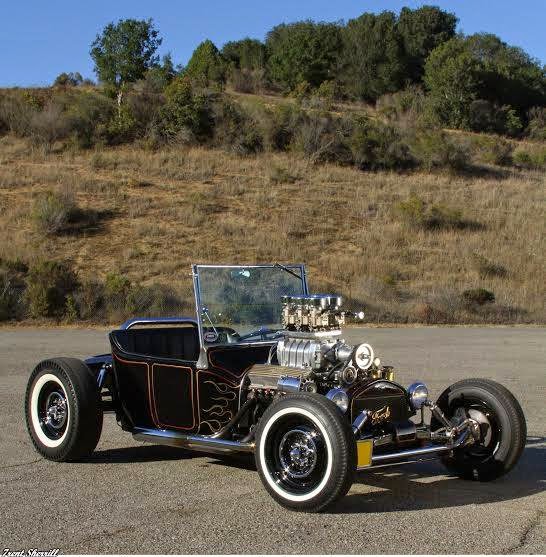 Johnny Gates built this T roadster in Grants Pass, Oregon (23 miles from SGE Headquarters) in the early 1950's. It roamed the streets, ran the drags, and profiled at the shows. It still runs the same equipment it tortured mercilessly back then, including the Deuce frame, steel body, 4-71 blown 331 Caddy engine, and LaSalle transmission. 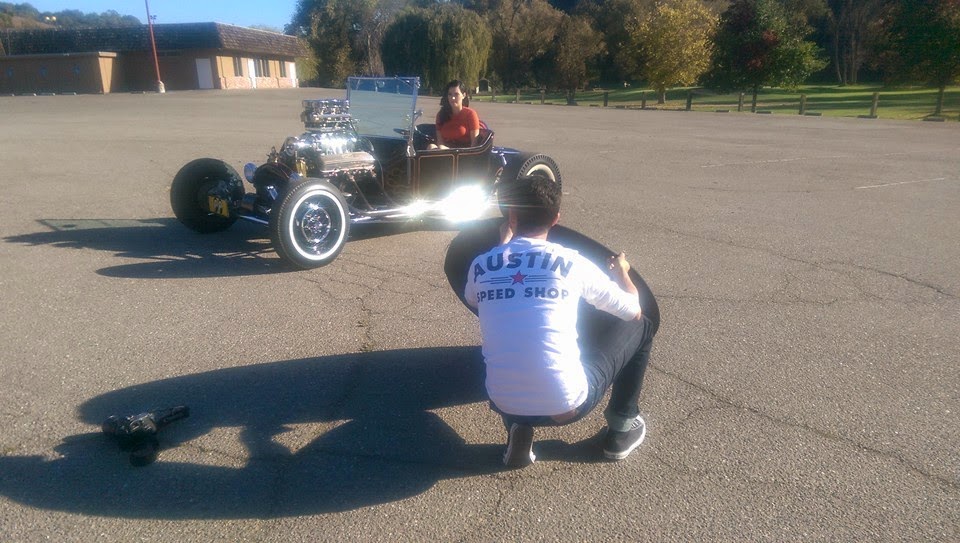 Revtones drummer Marcus Edell bought the Gates T in 2014, cleaned it up, and alerted the press. These images are from a Kleet Norris fall 2014 photo shoot that just hit the 'stands, days ago. The legend continues to spread. Kleet is noticeably taller than his reflector-aiming assistant and the seat-warming model... 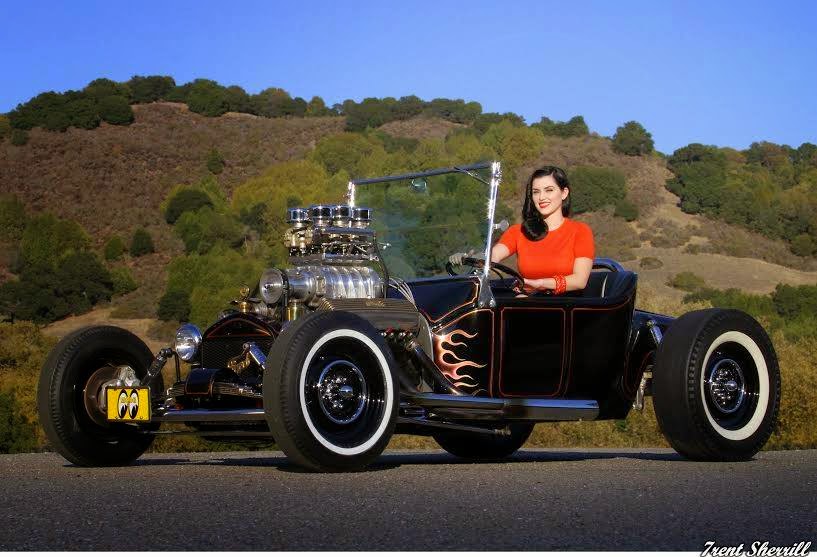 By '59, the Gates Job was so radical, it had to be towed to the Camp White drag strip on a lollipop trailer. (Dave West photo courtesy of Ronnie Mankins) 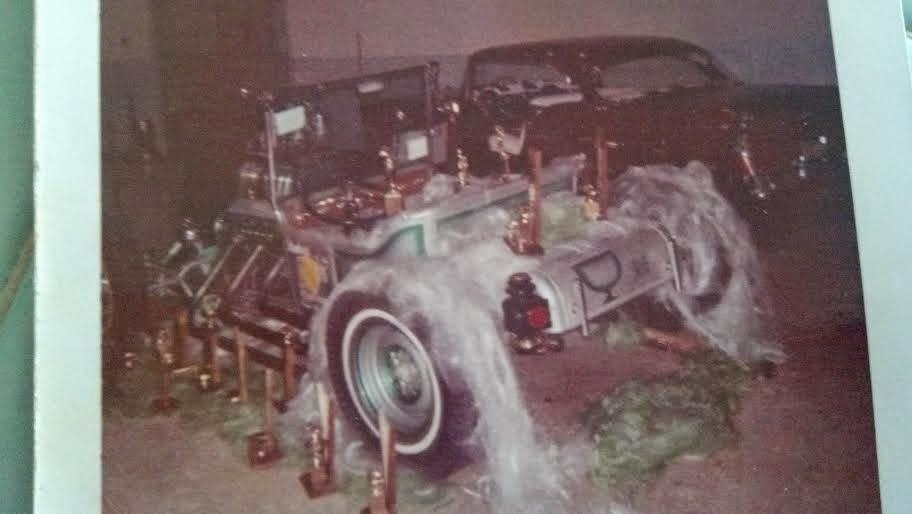 Gates dolled-up the T for a series of west coast show appearances in the '60s. One cringes to ponder how many people might remember Gates' meanass hot rod as this tragic princess poodle, rather than the heroic junkyard dog it really was. I guess it's a drag queen, either way. Edell is thrashing his brains out to present the car at Pomona, with a For Sale sign hung on it. (Photos courtesy of Kleet Norris and Marcus Edell) 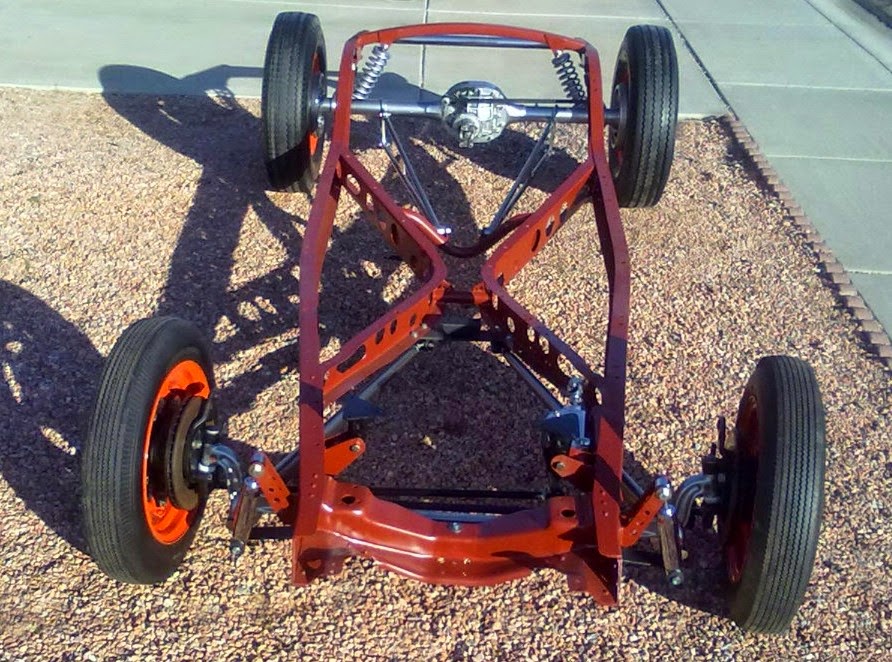 Black belt ink slinger Jimmy Smith started building his '37 Ford pickup several years ago. He obviously got off to a hot start in his Arizona garage, as this sunning-in-the-driveway shot attests. 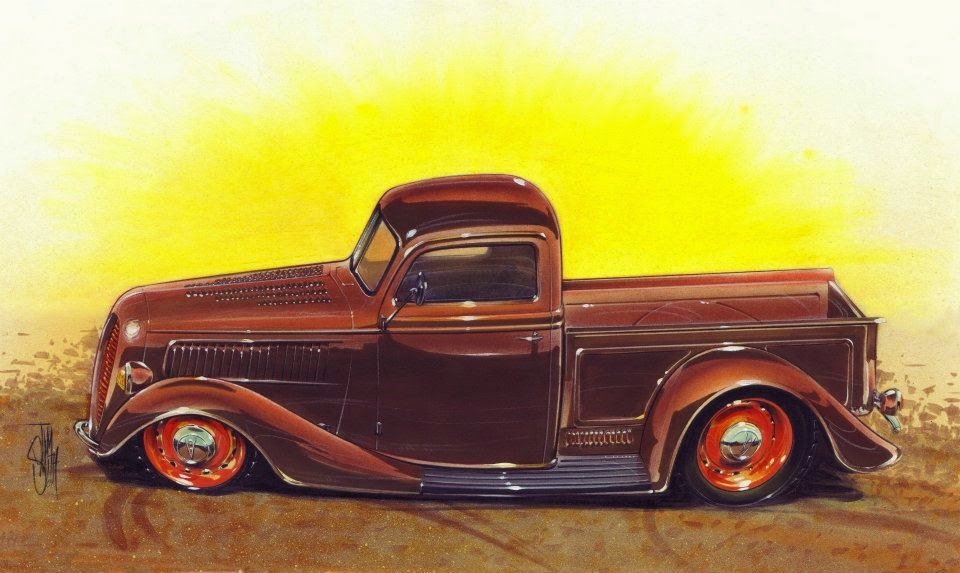 SGE regulars know Jimmy's truck is supposed to look like this rendering that he did back when the project was a mere pupa of an idea. Instead, it spent a long time looking like the driveway shot. At some point, we all need a spark to reignite that fire, and Jimmy's came with an invitation to display at the Roadster Show. 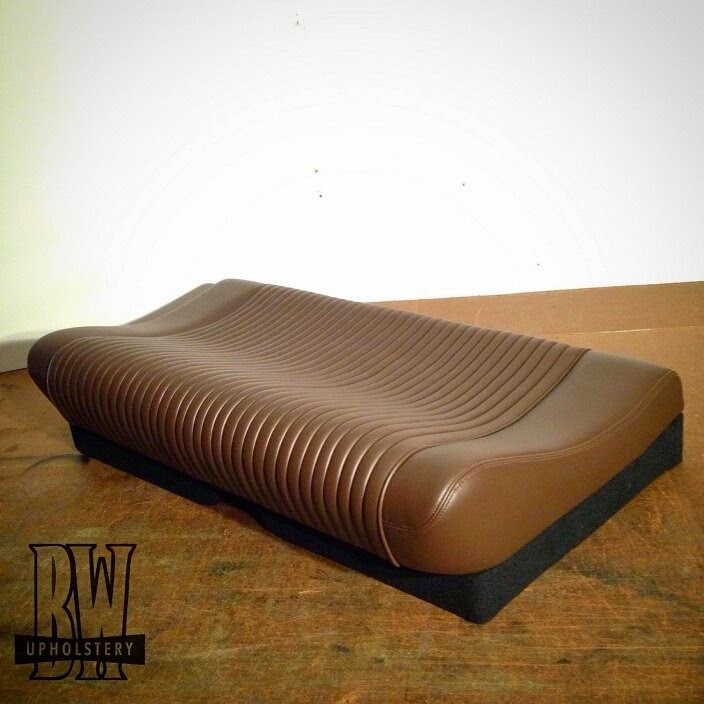 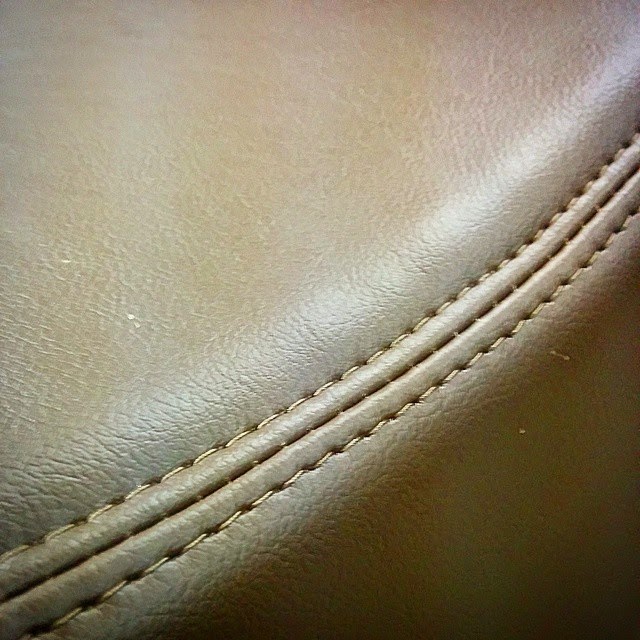 Last week we showed you Jimmy's scratch built bench seat, and this week, it's rockin' Brian Willingham upholstery. Mmm... French seams... Other than the interior, the truck only needed a bed, wiring, and plumbing. 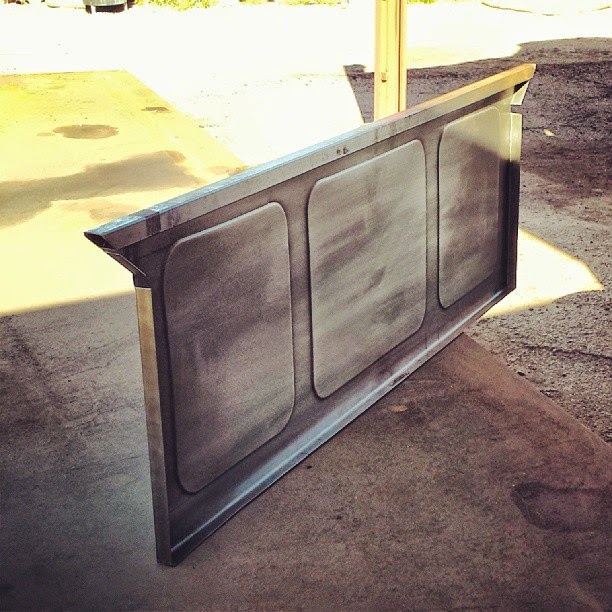 It was decided to start the one-off bed project at the tailgate and work forward. That's positive thinking, but unfortunately, not realistic in this instance. Time ran out during the tailgate build. At that point, Jimmy downshifted and called an audible. 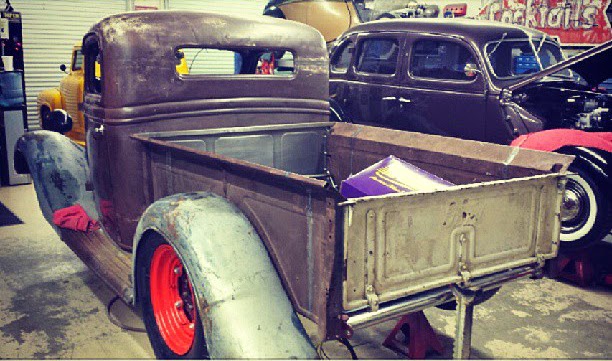 Plan B: Get the truck driveable and haul ass to LA. At this writing, Jimmy has damn near four leisurely days to put a fire in the hole and make tracks to Pomona. But will the untested engine fire and live? Can the traditional suspension survive the 372 miles of potholes and Gila monsters between Phoenix and Los Angeles? Will Jimmy cop the big trophy and an STD-free kiss from Miss Roadster Show? More will be revealed next week on SGE! (Photos courtesy of Jimmy Smith) 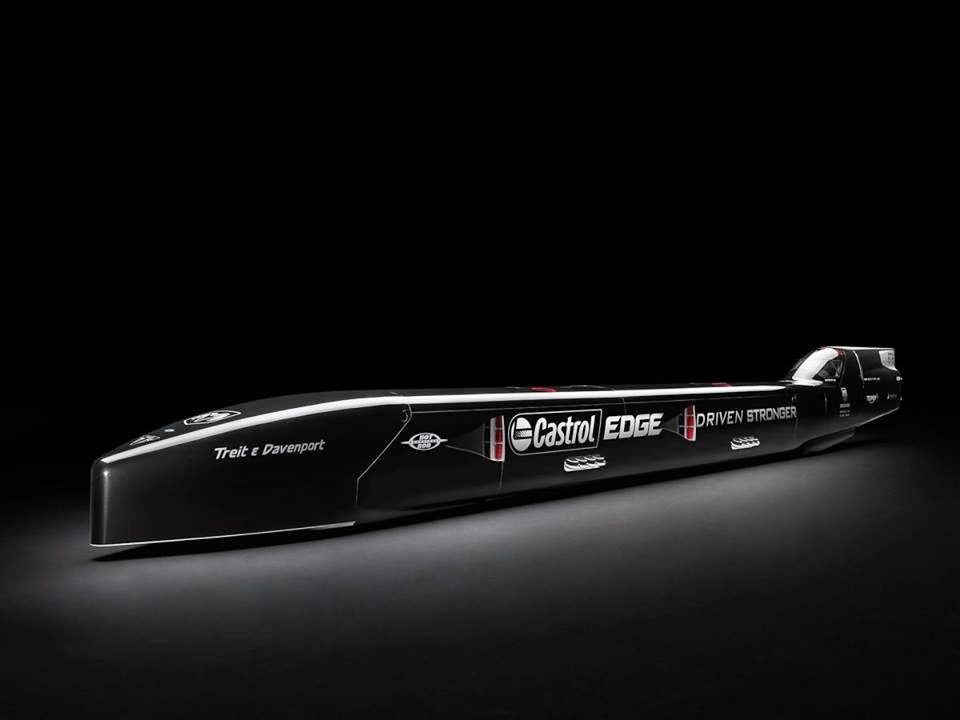 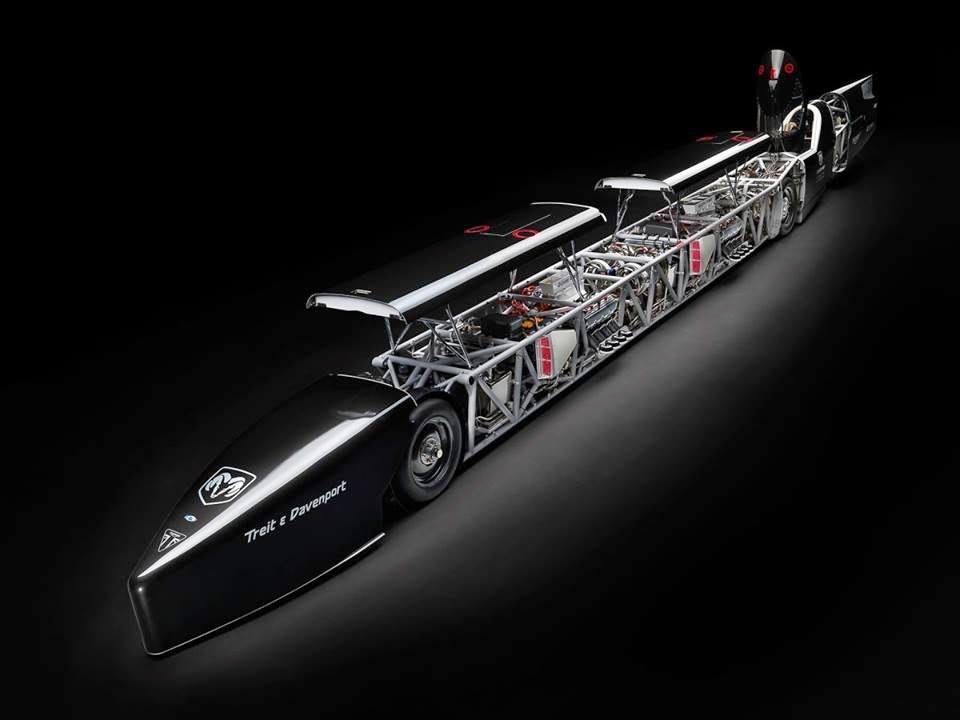 Again, thrash is a relative term. The Treit & Davenport team thrashed on their streamliner for a matter of years, before it hit this stage. I inspected this machine on the salt (with help from Paul 'House' Gilbert, who is a genuine SCTA Tech Inspector, so there), and can tell you this masterpiece is beautiful on a large scale - it's as enormous as it is gorgeous! (Photos courtesy of Treit & Davenport)

T&D went 272 MPH on a shakedown run, using one wounded engine (there are stereo blown Hemis in there). All was ready for Speedweek 2014, but you know how that turned out. The Northwest velocity heroes are shooting for 550 MPH this year. (Photo courtesy of Peter Vincent) 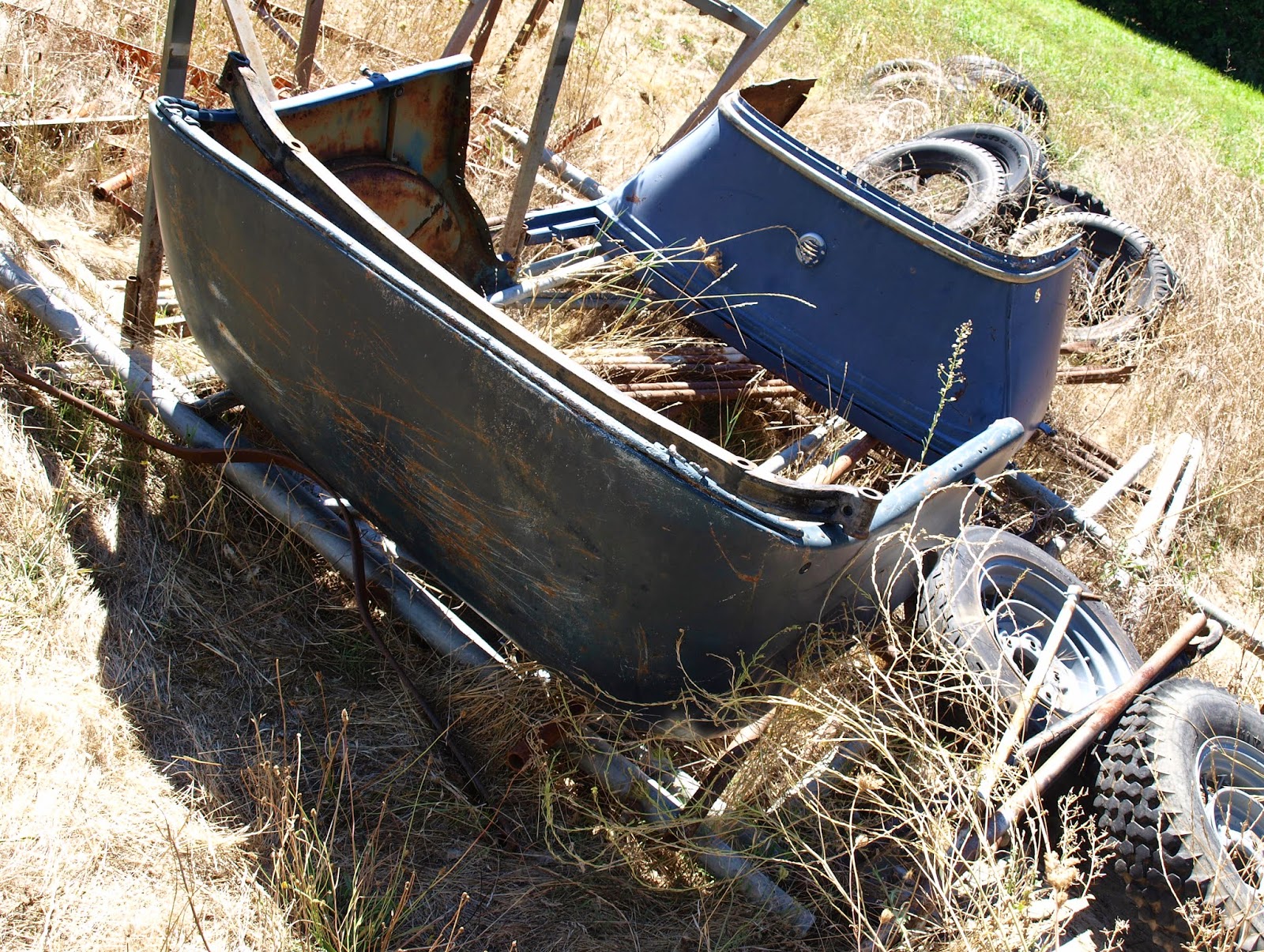 At the opposite end of the thrash spectrum sits the SGE Model A project, started in 1996 and still going nowhere fast. In a mere 19 years, the project has magically morphed from this pile of parts in a field...

... to this pile of parts on the Custom Metal frame jig, over 10 feet away from the field! I don't know how we pulled it off, but I'll confess, we're exhausted. Custom Metal commander Dr. Lockjaw and myself have each survived enough thrashes that they don't appeal to us anymore. Yet we press on as if we were still in our 50's. Okay, I'm still in my 50's - a frisky puppy in the current hot rodder dog pound - but who's counting? 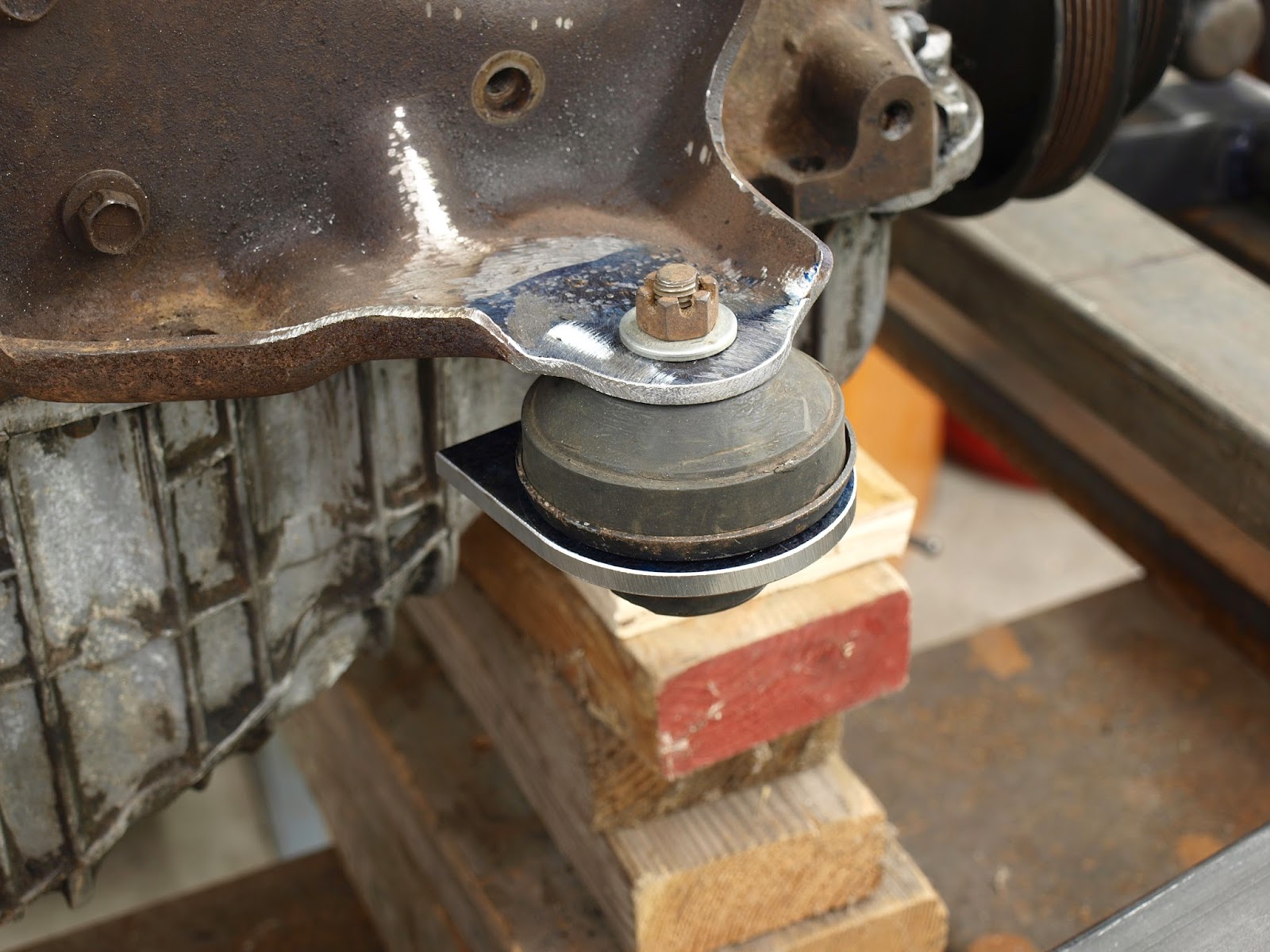 We spent last Sunday crafting the first section of the 4-piece frame mounts for the 2.3L Ford engine. We made two of these in a single day. Yeah, just Doc and I, working manually, by hand, without a net. But we're recovering now, and should be ready for the next step of this intense procedure by next Sunday, when we attach the steel base under the rubber biscuit to the frame rails. Look for the dynamic action shots right here, next Tuesday! Meanwhile, this post is what I get for challenging builders to get over the holidays, last week. (Scotty shots) 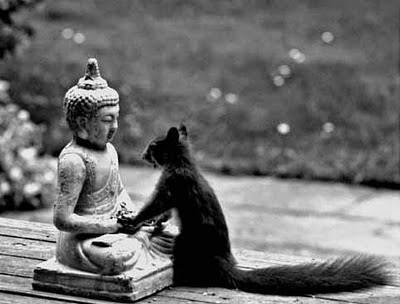 As thrashing is an enlightening process, so is enlightenment a thrash - if approached with a squirrel's metabolism, anyway. Full enlightenment takes them about five seconds. (Photo courtesy of Shellski) 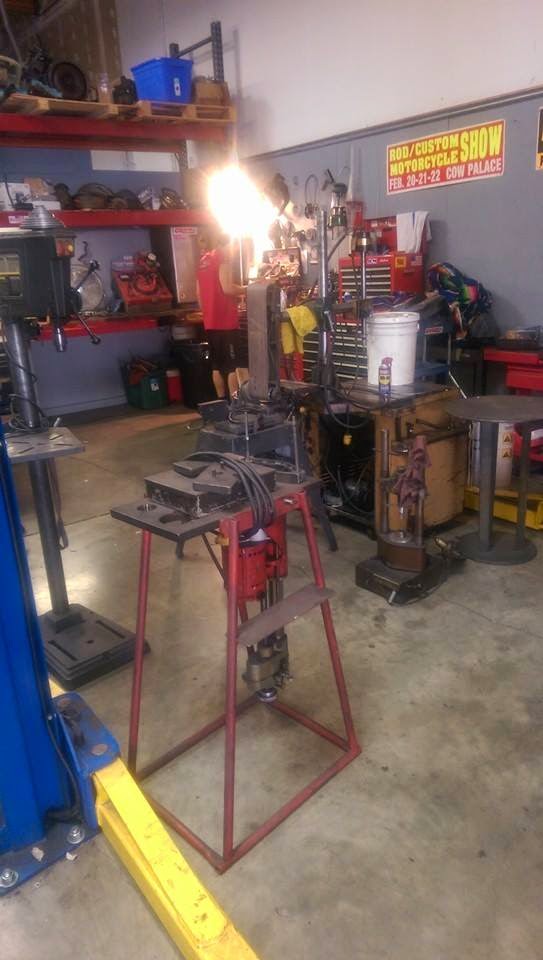 It's back there against the wall. Marcus Edell's Craftsman rollaway. Pretty sano shop, Marcus. Clean enough to host band practice, we'd say. Where do we plug in? (Photo courtesy of Marcus Edell) 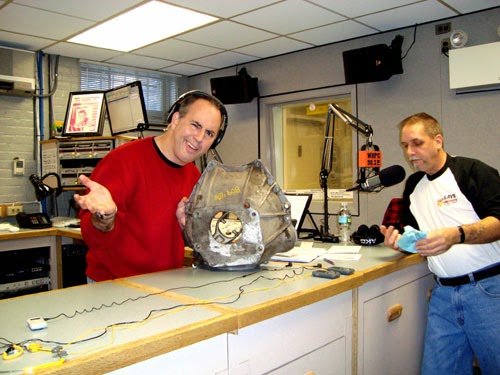 Chris Switzer (left) and our own Motormouth Ray Guarino pioneered the use of visual aids on radio. If that weren't enough reason to tune in, they're bona fide hot rodders, who speak of nothing else on the air or off. And they know whereof they speak. Listen to the Motormouth Radio Hour every Sunday and Thursday at noon (EST) on www.motormouthradio.com. It's a non-stop thrashathon! (Photo courtesy of Motormouthradio.com)

Posted by Scotty Gosson at 1:03 AM No comments: