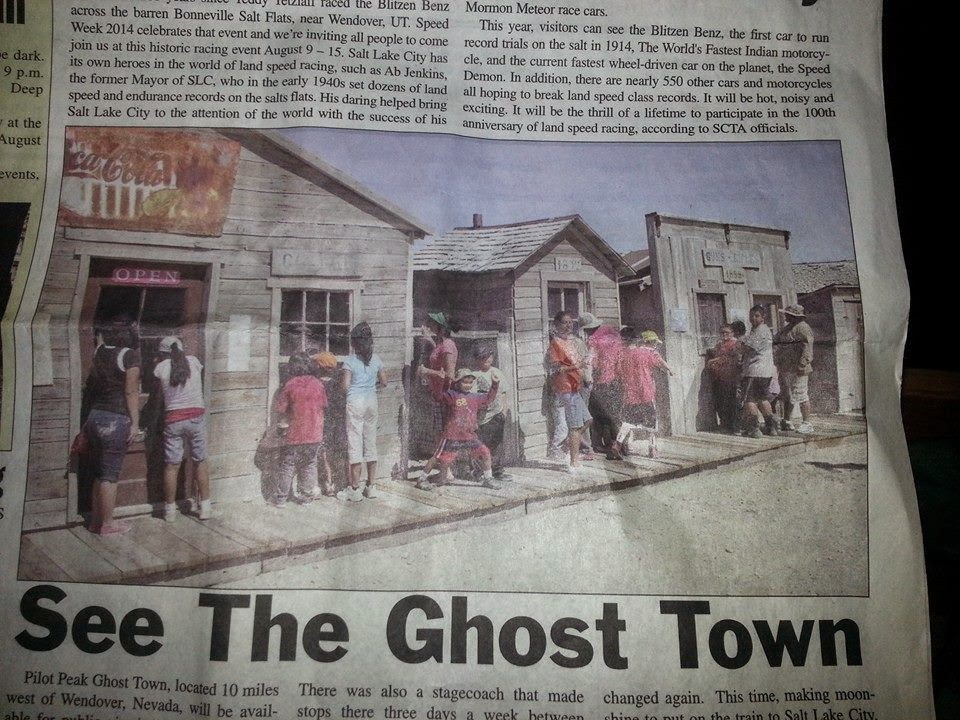 The Wendover Times ran this piece on a local tourist attraction, as the global migration to Speed Week transformed the remote casino town into a thriving metropolis for 72 hours. Then the rains washed away the racers and scenesters, leaving Wendover as isolated and ghostly as ever, amid the salty winds that sing through the power lines. 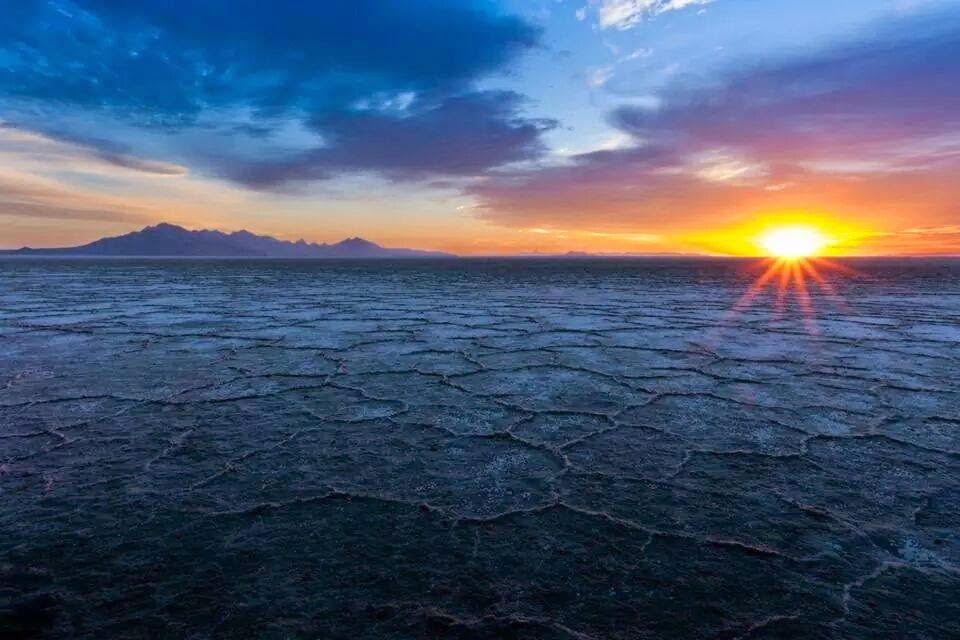 August 3rd. Baked to crispy perfection and ready for grooming. 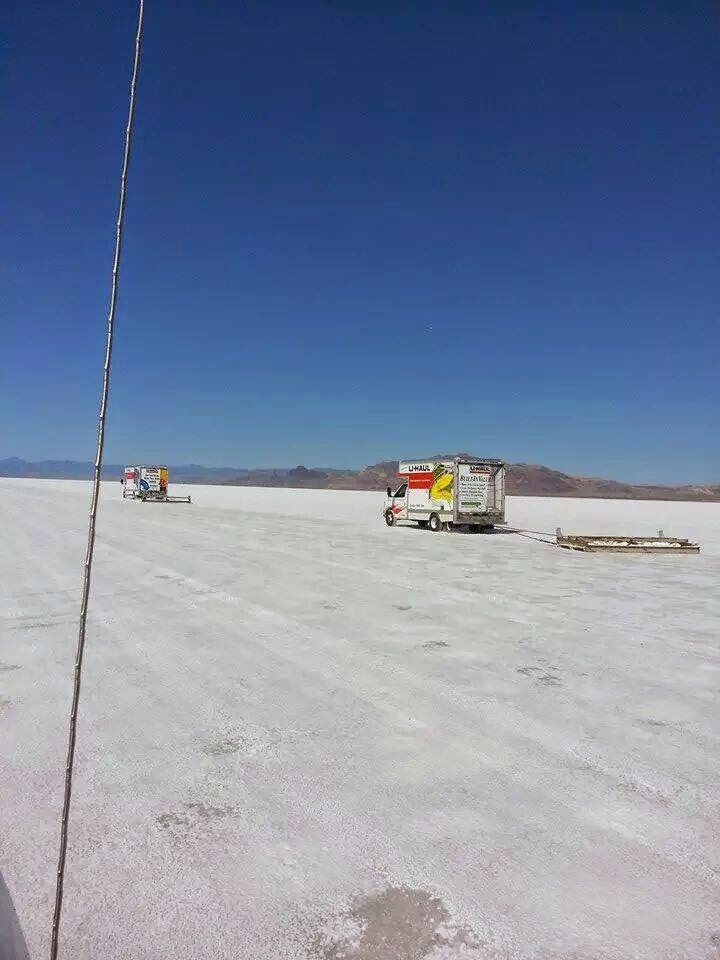 August 4th. The SCTA's travelling beauty parlor. These guys may put in more time prepping for these events than all racers combined. 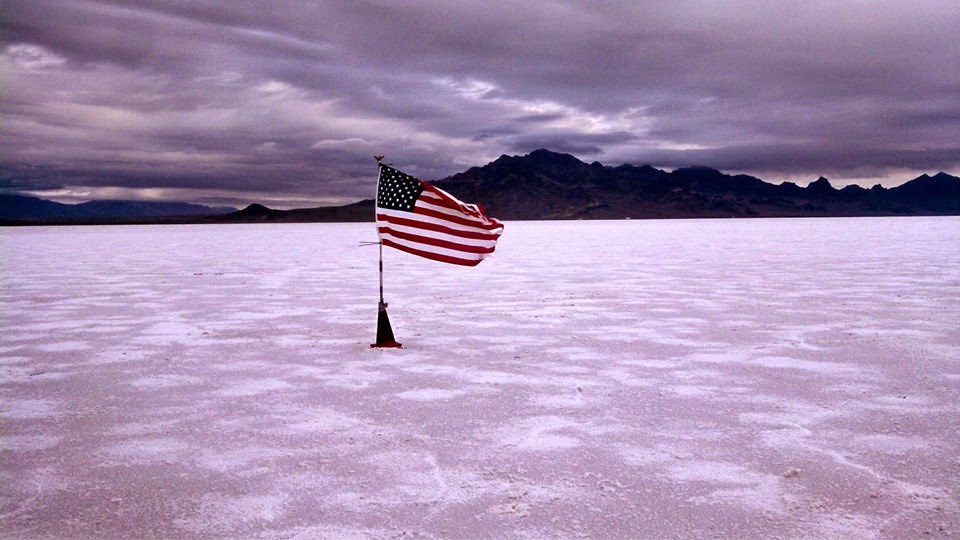 We claim this land in the name of speed. Unless someone faster comes along, of course. 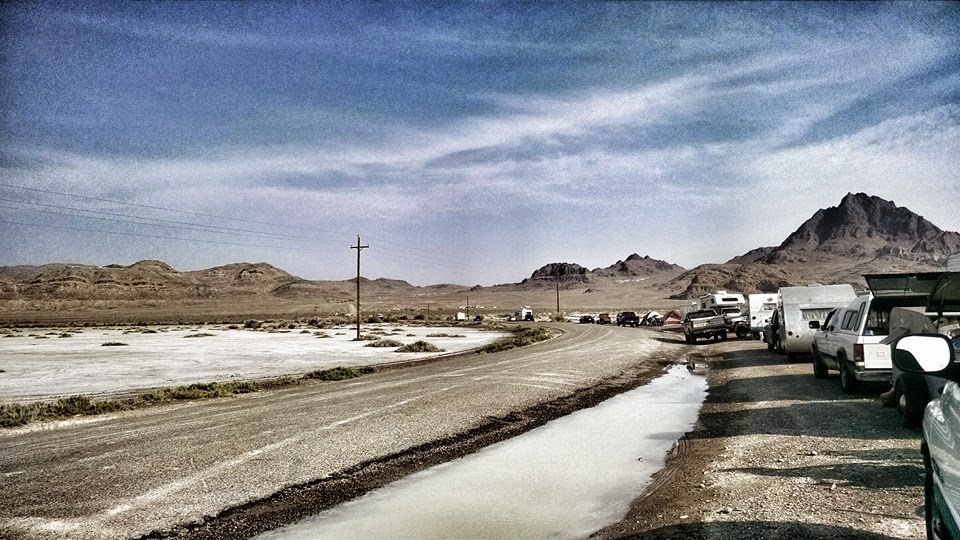 Revelers at The Bend In The Road, lined up on August 7th for opening day on the 9th. 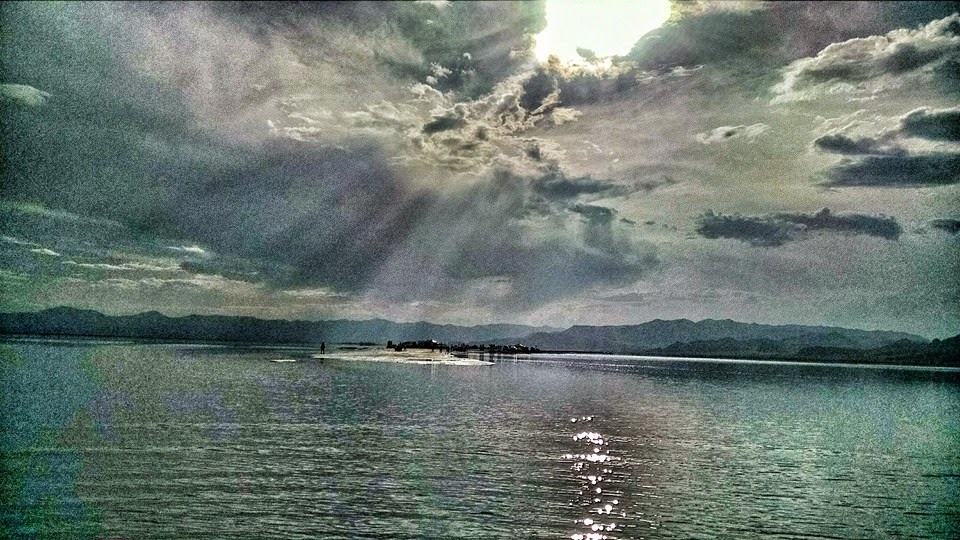 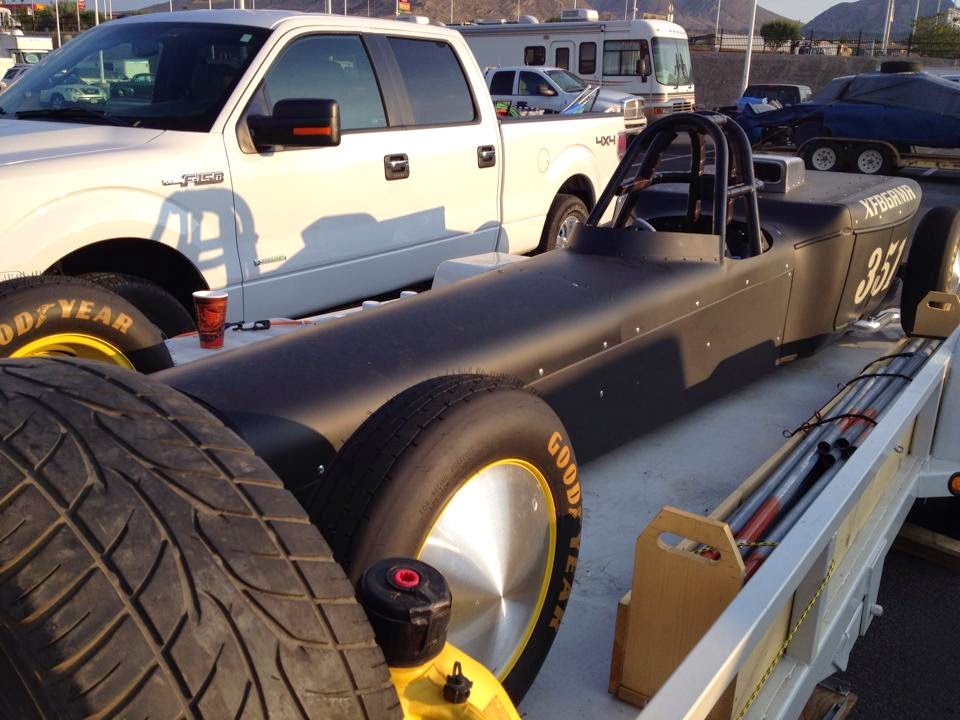 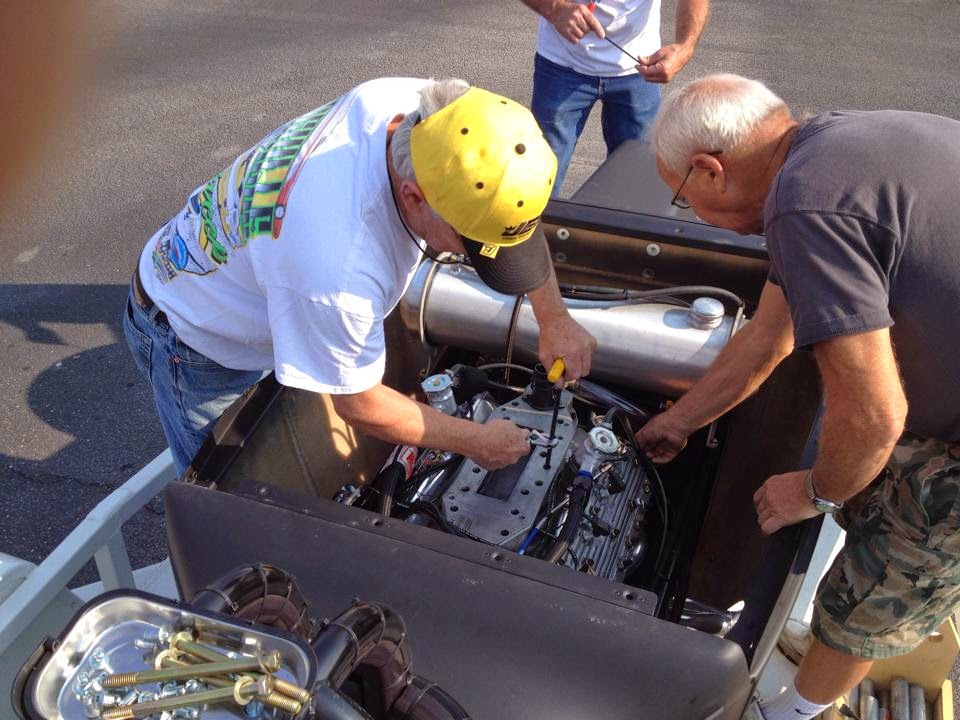 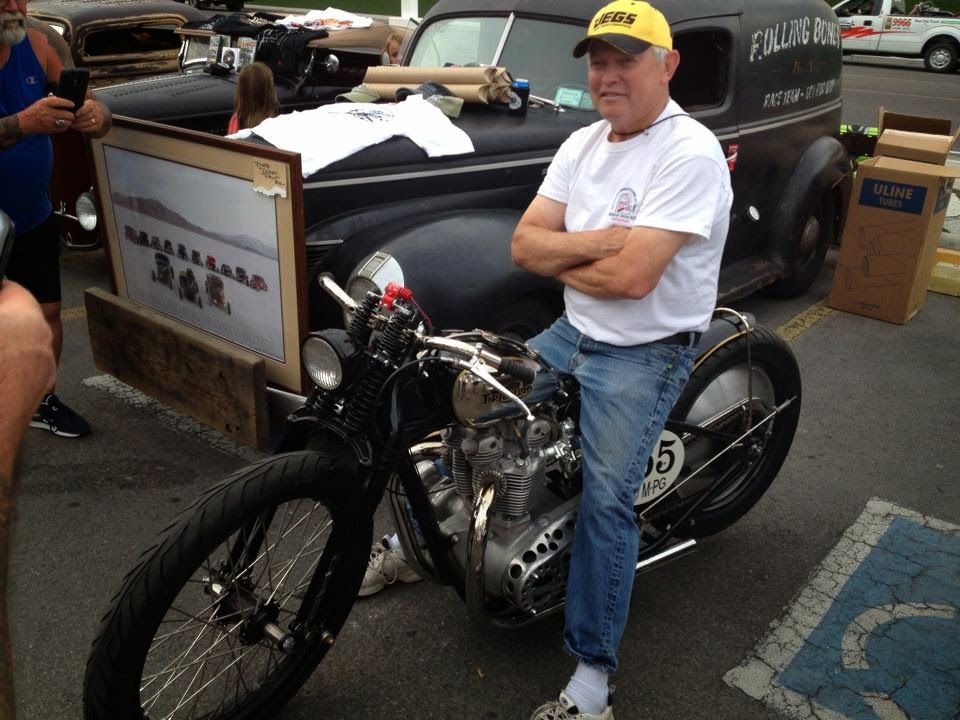 The race car was ultimately covered and forgotten, as Lindsay and fellow racers shifted into social mode. By all accounts, a great time was had by all. The whereabouts of brother Tom's Shetland pit bike are unknown, but Jim made do with this borrowed mount. Good to see that the Rolling Bones are still enjoying service from Dave Lyon's old '40 delivery (in background). 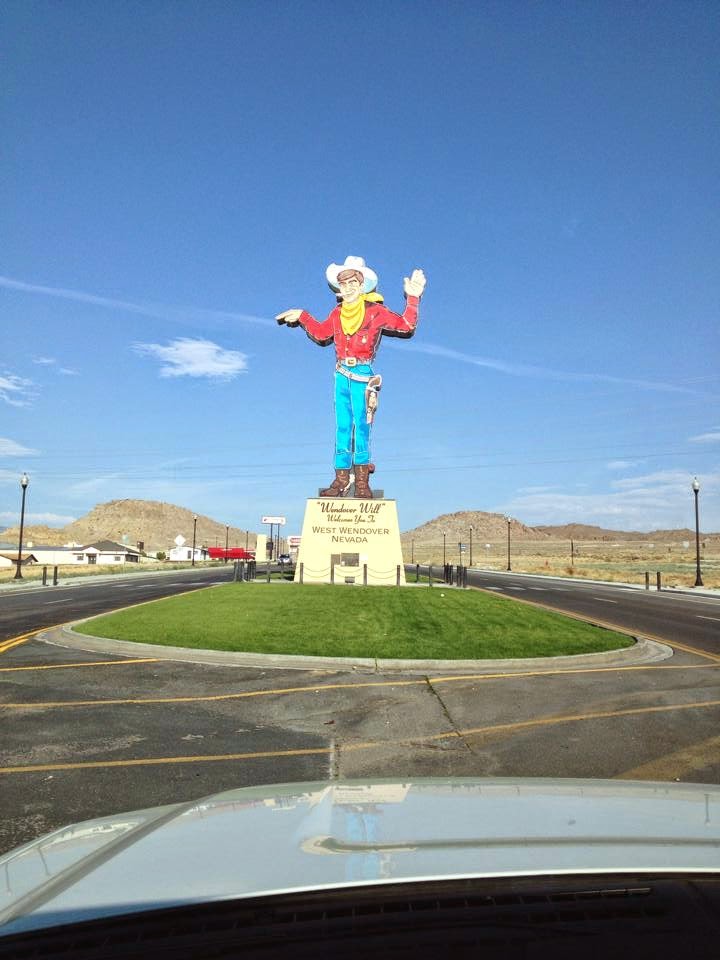 Jim Lindsay's take on the event that wasn't: "It was a nice visit, I'll say that." (Photos courtesy of Jim Lindsay)

It was the greatest event that ever never happened. Anticipation of this year's SCTA/BNI Speed Week had been building since the first timed runs across the salt in 1914. In one short century, Speed Week had become so much to so many, that the 2014 edition simply couldn't have delivered. There's no way it could have lived up to the hype emanating from media, racers and fans alike. So the Salt Gods delivered a reality spanking instead, lest we completely lose our perspectives. The 2015 event will no doubt be approached with less romance and more realistic (if any) expectations.

But there's no need to suffer through another year to experience epic achievements on the salt. Despite wasted vacation time and other jangled logistics, many of the hitters constituting this year's all-star lineup will be back for the World Finals event in late September or early October. Mike Cook's private Shootout is also on the calendar (check the SCTA Facebook page for updates). So 500 MPH remains this year's bullseye. I hope to witness those attempts in person, but my plans for covering Speed Week were dashed before I got out of the driveway, so I'm approaching these bonus events with caution. When my Speed Week odyssey scheme didn't pan out, I went down to the 7-11 and camped out at the magazine rack. It was a pleasant escape, until an event transpired that reminded me there is no escape.

Once I'd had my fill of atomic hot dogs, was up to my ankles in Powerball scratch-offs, and had dog-eared every automotive magazine on the rack, I returned to the SGE campus and locked myself in the bunker. I enjoyed several cat videos online before chancing onto a cosmic event on Facebook. First, I saw firsthand cellphone coverage of the storm that drowned Speed Week. The Tony Stewart Sprint Car incident was everywhere, but we're withholding comment until the dust settles a bit. Then, Jim Lindsay posted a photo of a wicked '34 Ford 5-window drag car that he'd lifted from Dick Page's site. Dale Seaholm replied with a mention that his personal coupe project had been inspired by the one that mutual pal Jim Lindsay had posted. And we all went down the rabbit hole together. 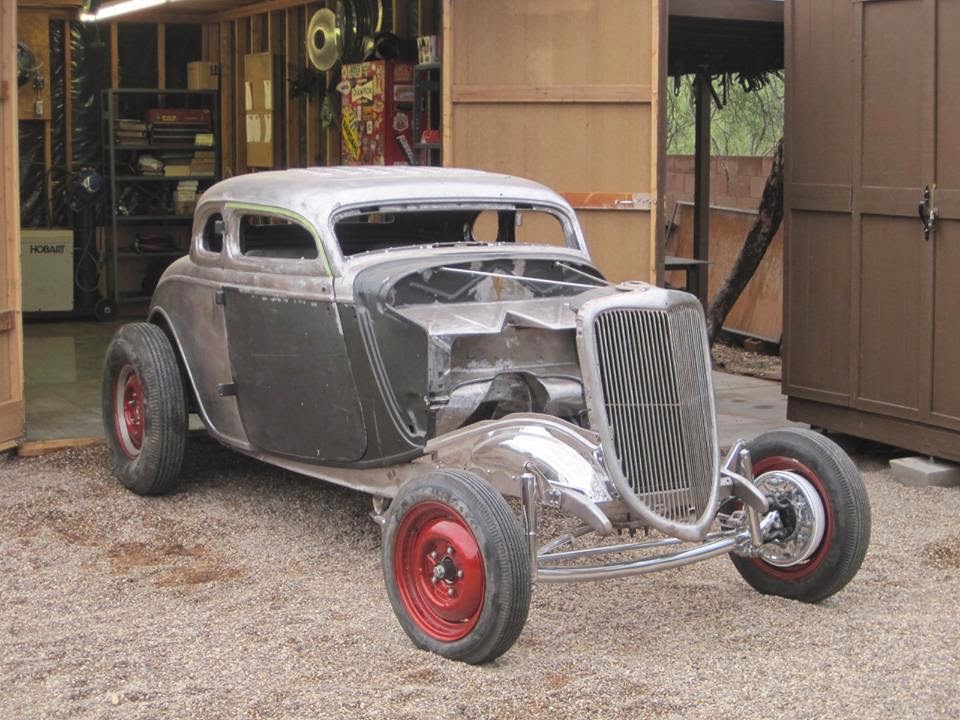 Dale Seaholm's 5-window, looking very right in advanced stage of the build. Seaholm is one of those Facebook Friends whom I've never met, yet feel a solid connection with. Now I know what that was all about. Dale said he based his chop on the Peckerhead club's 7-11 coupe, with their approval and assistance. I'm familiar with the Peckerheads' car, and in fact, have a very strong emotional attachment to it. (Photo courtesy of Dale Seaholm) 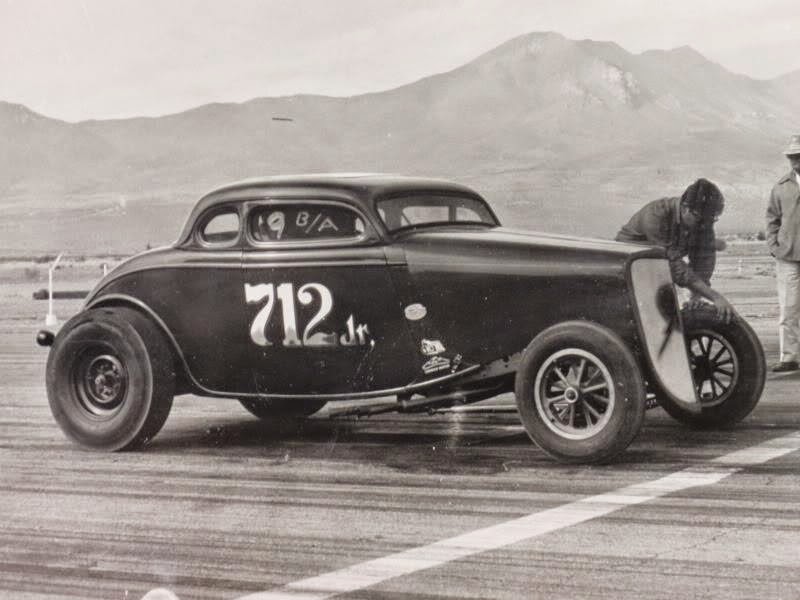 I posted to Lindsay's thread that the depicted coupe bore a strong resemblance to Phil Turgeson's 712 coupe (built in '59 with a full house flathead). Seaholm responded in agreement, and photo comparisons were made. Sure enough, we had a match. The distinctive downward sloped one-piece nose gave it away. Page's photo was taken a year after this shot of Turgeson being staged, perhaps at Pomona. I'd seen this image online before. Turgeson built the car at NHRA lynch-pin Jack Hart's Texaco station in Santa Ana. The heart/lightning bolt on the grille was the Hart's Automotive logo. (Photo courtesy of Dale Seaholm) 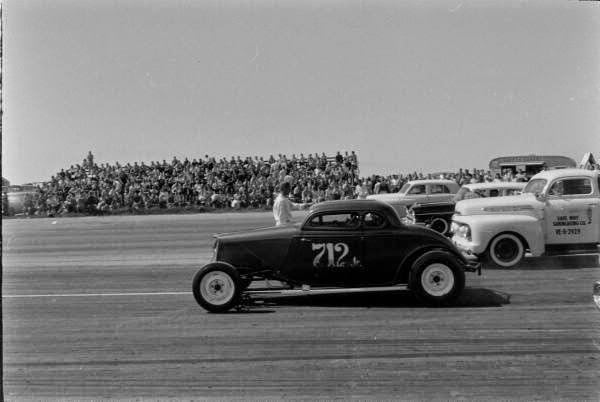 Then Seaholm surprised me with this photo, which I'd never before  seen. Perhaps an SGE reader with actual memory cells can identify this location. My guess would be Pappy Hart's Santa Ana strip. And I'd have to assume this is an earlier iteration of Turgeson's tenure with the car (before the 12-spokes and Halibrands). (Photo courtesy of Dale Seaholm) 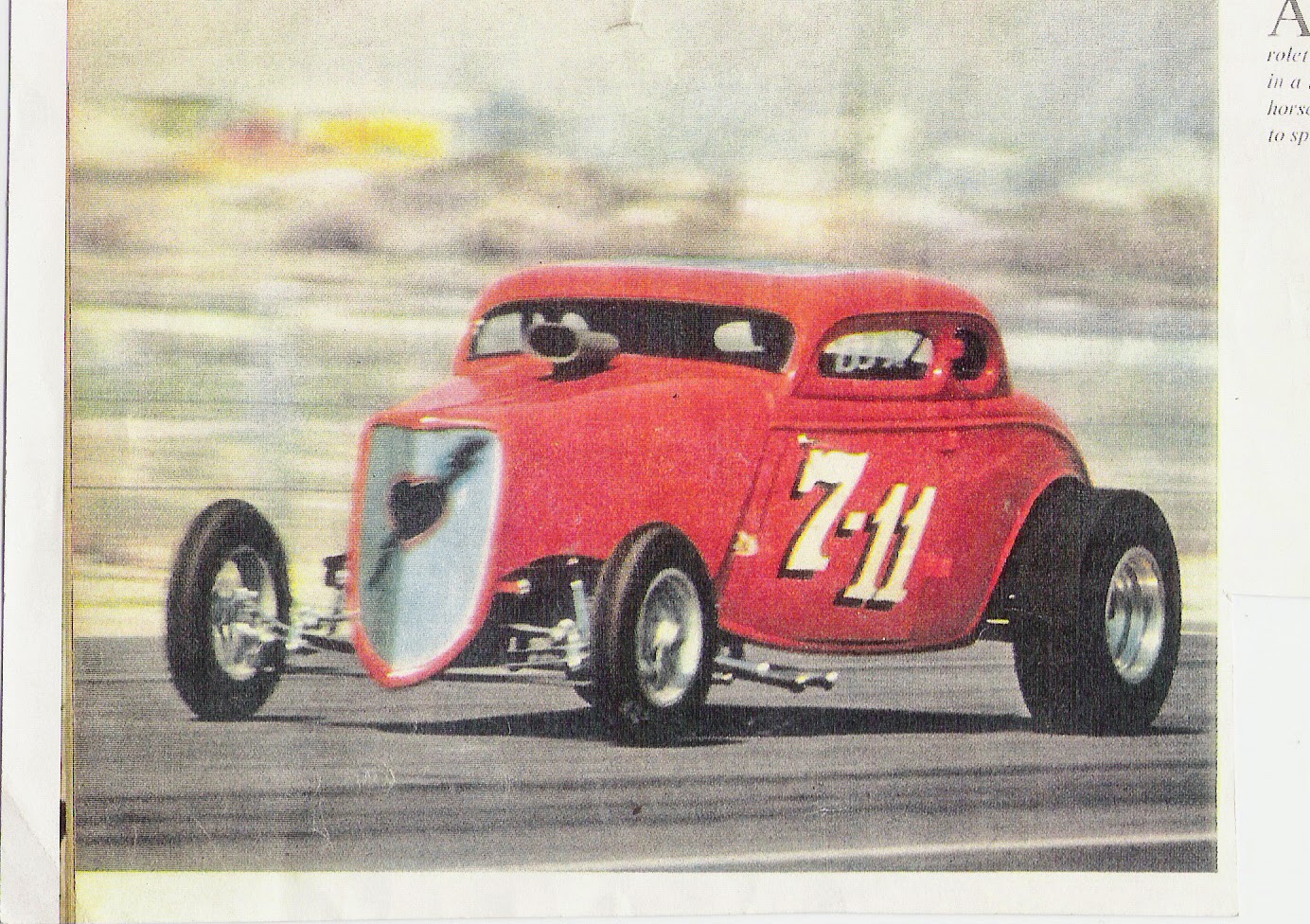 Sports Illustrated ran this shot in a late-1961 issue. Kent Singleton had just taken ownership, and the decklid was lettered "Singleton-Carrillo-Nelson". Their "Headhunters" car club was later mentioned on the quarter panels. They swapped the flathead for a Chet Herbert blown alky smallblock Chevy. (Photo courtesy of Mike Dowell collection) 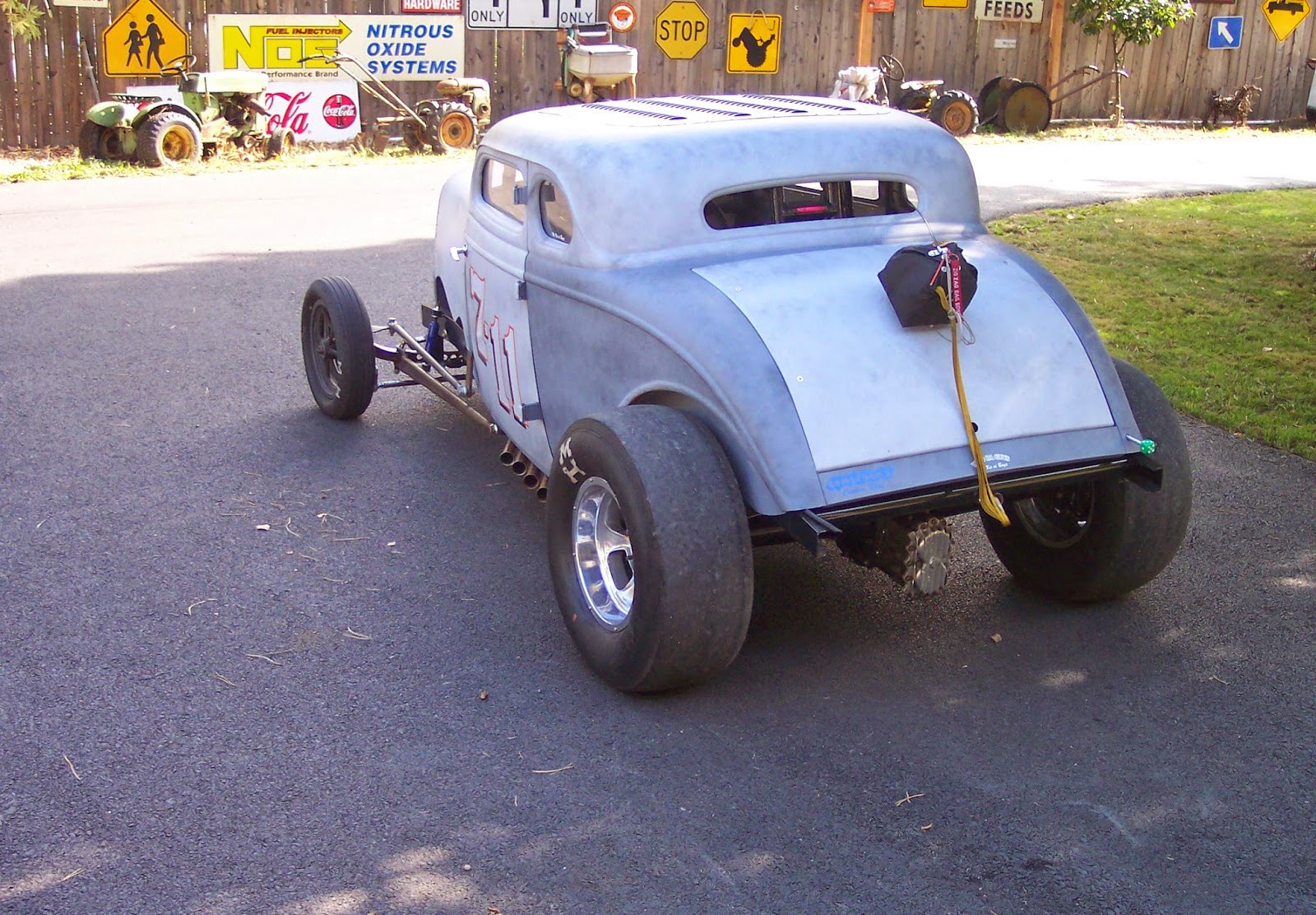 When the Headhunters used up the coupe and bid it adieu, it vanished and hasn't been seen since. Kent Singleton's younger brother Mike Dowell and his partner Curt Vaught decided to build a recreation in 1994, after an exhaustive search for the original (detailed in my Sept. 2005 R&C piece "Laughin' Bones"). The majority of the chassis work was performed at local legend Bill Comstock's shop. Chet Herbert and Zane Shubert donated parts to recreate their old 357" monster mouse. Dr. Lockjaw and other fabricators donated various chores. This is when I staggered into the story, blindly volunteering grunt labor and magazine ink. I caught the car at Mike Dowell's home garage during final mock-up. It remained in this iteration for a couple of years. (Scotty shots) 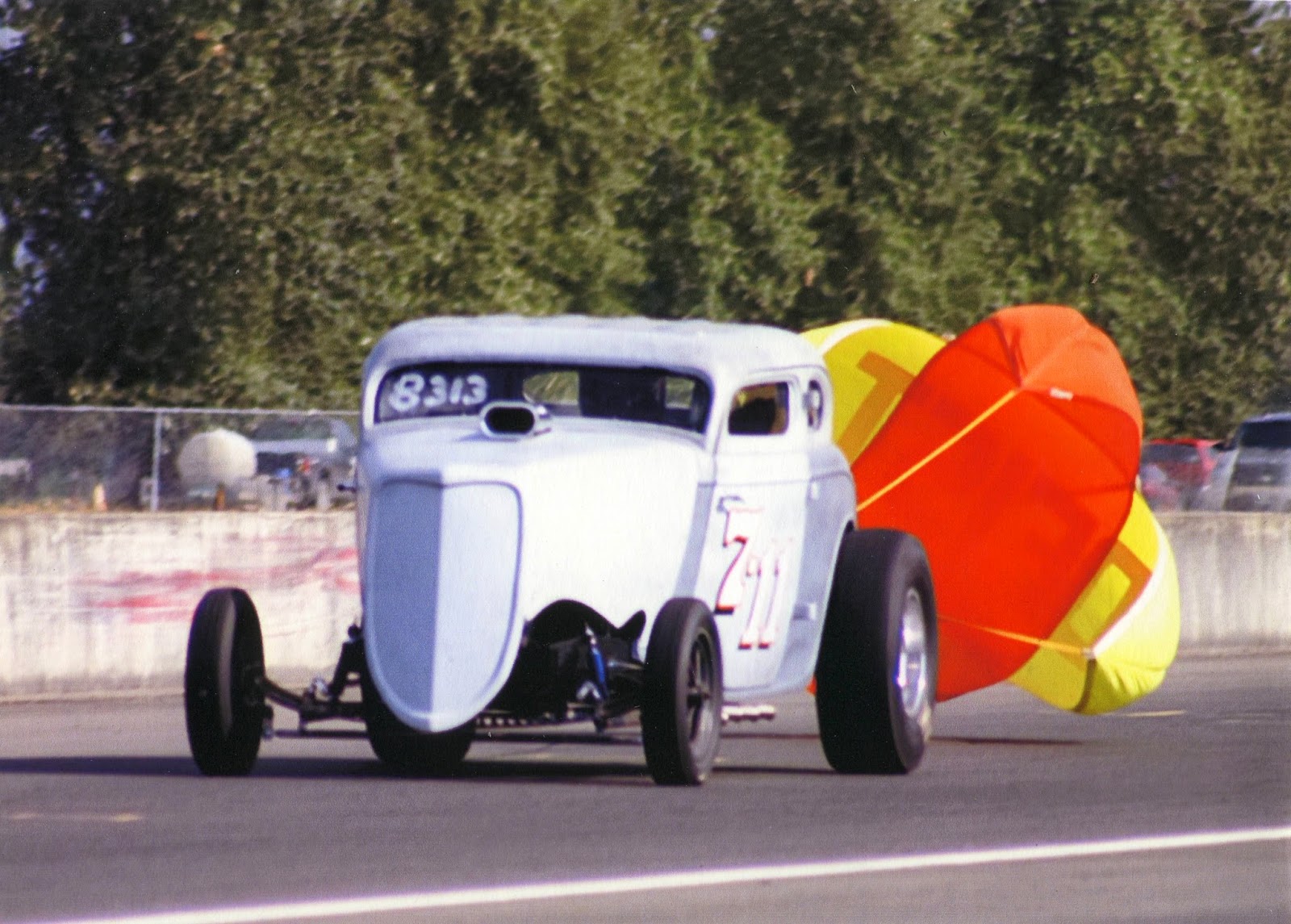 Curt Vaught was the designated driver, but when early guardrail-to-guardrail 146 MPH passes proved more dramatic than quick (low tens), Dowell plugged various stunt doubles into the seat, including yours truly, shown here just before charging into the field at the end of Woodburn Dragstrip with no steering. I plowed up some beans or something, but did no real damage, except to my ego (I lost to Dr. Lockjaw's Tetanus II on this run). (Unfortunately the photographer's name has been forgotten. My apologies!) 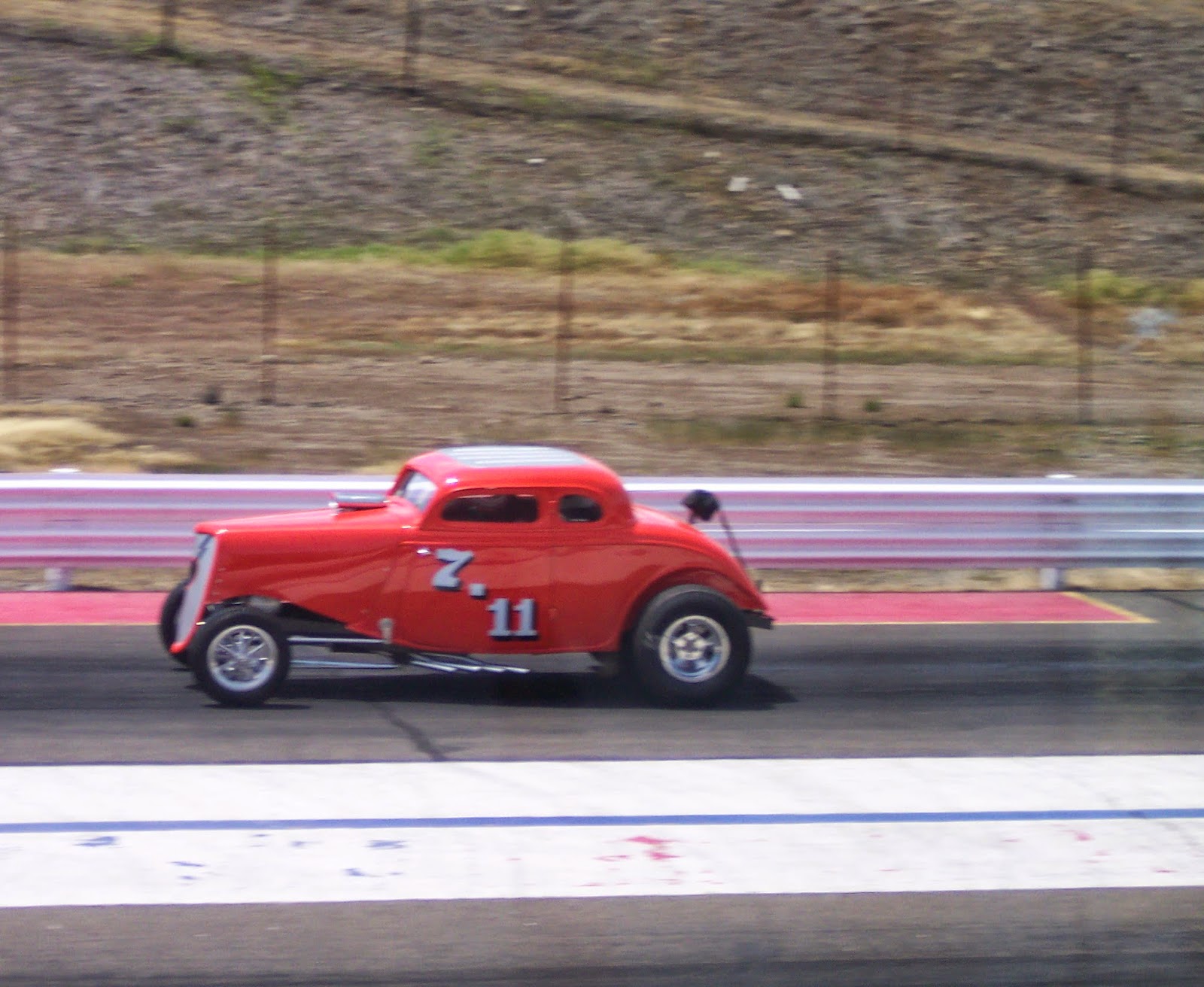 Eventually, the car got paint, and polish on the mags. It looked better, but never really ran to its potential. I shot this from the tower while announcing at Champion Raceway one evening. (Scotty shot) 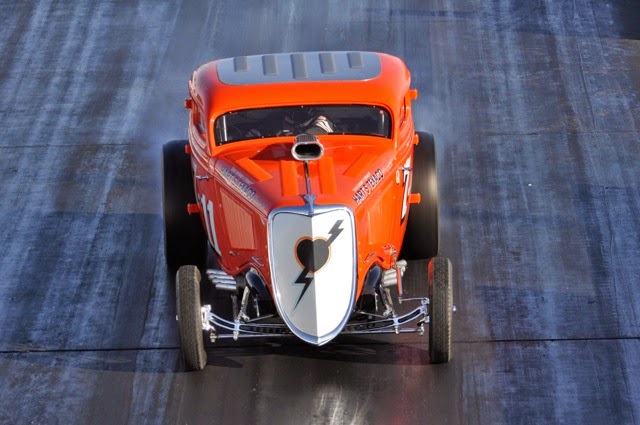 The 7-11 was bought by the Peckerheads club in California. These guys really got it figured out! Wheelie bars are now mandatory. Low 9's are par. When Drew Hardin took the Hot Rod Deluxe Editor's chair, he dispatched Paul Sadler to shoot the refurbished coupe, and I was to revisit it in text. Alas, for reasons unclear, my Peckerhead connection pulled the plug on the project. And so continues the curious mystery of the 7-11. (Photo courtesy of Paul Sadler)


When my Speed Week plans were cancelled, I accepted the invitation to join Saint Shellski in celebrating her dad's 86th birthday in San Francisco. It was an epic blowout, as always. But it left precious little time for this report. Now that it's done, I plan on taking a nap. Join us next week, when we return to squirrels, toolboxes, and the usual tomfoolery. Hopefully with fewer technical glitches than this spastic post. And maybe even with some actual news reports. Thanks for your understanding. 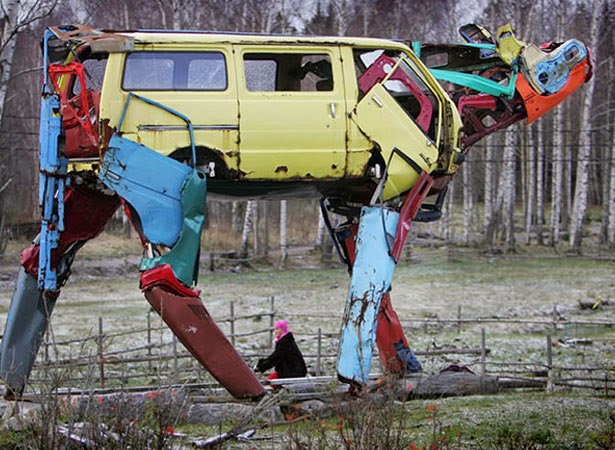