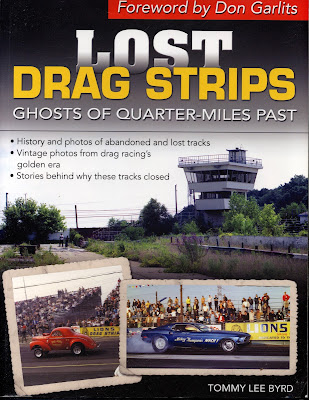 The word came down from corporate today: I've been cleared to reveal the secret CarTech book project that chewed up the last eleven months of my life, spit it out, then hightailed it to Minnesota. It's a follow-up to Tommy Lee Byrd's best selling Lost Drag Strips, above.

The fascination with Tommy Lee's book is understandable. For drag fans, this topic is the ultimate train wreck. The closed drag strips that once hosted the glory days of drag racing have been abandoned and left to rot in the elements like last season's slicks. That level of injustice is enough to redline even the most casual of race fans. Byrd's excellent essay has amassed impressive sales figures over the preceding two years for good reason. Can that momentum be sustained with a sequel? I don't care.

Inevitably, my take on America's lost drag strips will infuriate stalwarts of tracks not included in the book, just as Byrd's did. Those absences are not a personal attack on you, Mister and Missus Race Fan. In fact, I listened carefully to the backlash when Byrd's volume was released, and made it a point to research the most loudly grieved strips first. The tech specs for these books are tough to meet (ie: photo size and quality, legal permissions, etc.), and not all deceased race tracks were documented by professional historians and photographers. Despite my hardest thrashing, several tracks with dynamic stories simply couldn't pass tech. It wasn't their time, yet. Still, in this book you will read heroic stories of orphaned drag strips from Alaska to Hawaii to Florida (we had to cut my piece on the Puerto Rico strips). End of caveat.

An army of drag racing's most storied characters pitched in to help get this project across the finish line. All are heroes of mine, and today are now personal friends (though many already were). I love my job. Nothing beats firsthand accounts of history, and this book is crammed full of the real McCoys who built, managed, and raced on these sacred grounds. No non-fiction author ever had it this good.

Bonus: A surprising number of drag strips sentenced to death have sidestepped the reaper and returned to service. These are some of my favorite stories in the book. Better yet: A couple of tracks that I believed to be long dead have never ceased operation after all! Sometimes I love being wrong.

In the following weeks, I'll be sharing some of the thousands of words and images cut from the final version of the book. There's a lot of leftover material. I went kind of nuts on the research, resulting in an annoyed chainsaw-wielding editor spraying the office with sawdust in his pajamas at 3:00 AM. Sorry, Bob.

My hit on these abandoned quarter miles (tentatively titled Lost Drag Strips Too) is decidedly different from Tommy Lee Byrd's vision, but will hopefully come across as equally reverent. It is now in the layout stage, and should go to print this winter. As per tradition, we'll likely miss the Christmas season (maybe next year). SGE readers will be the first to know the release date. Until then, I hope you enjoy a tease. I'll be spoon-feeding you random peeks of the out-takes, right up to release day. Then you can see the good stuff. Not that it matters to me today. I've had my way with the subject, and it's out of my hands now. See you at the bookstore. 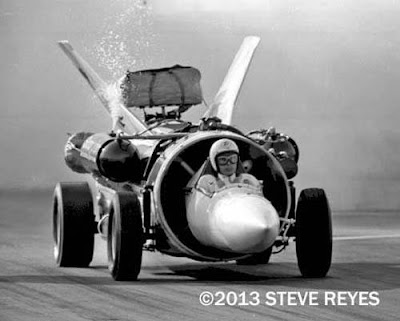 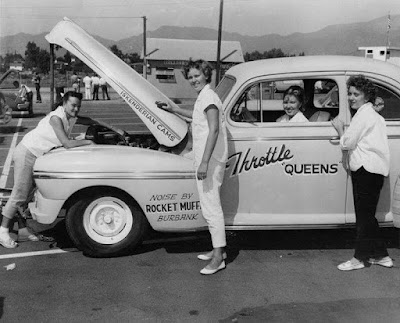 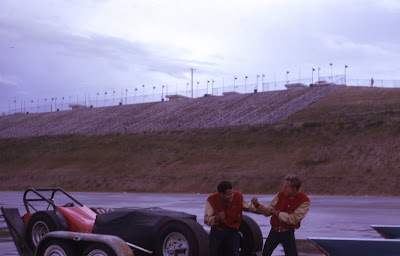 After days of battling snow and sheep, Don Prudhomme and Tommy Ivo finally arrive at Sid Langsham's Continental Divide Raceway in Colorado - the very first stop of their very first tour. Frisky as they were, the southern California duo were hopelessly out of their league in the elements, but knew what they were doing with the quad nailhead four-wheel-drive dragster. Prudhomme drove the dragster and the Cadillac tow car, and serviced both while Ivo signed autographs and evaluated the local talent. (Photo courtesy of Tommy Ivo)

Skis and tracks replaced slicks and cycle tires during Minnesota Dragways' winter seasons, when the nitro snowmobiles took over the strip. TV Tommy may have been inspired by Arctic Enterprises' transparent transporter. (Photo courtesy of John Foster collection) 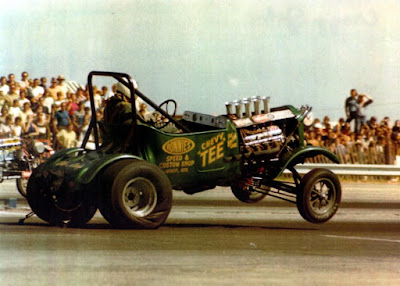 Typifying the Kansas City racers' feisty demeanor, Floyd Craig's "Chevy Tee Fine" A/Street Roadster observed "the spirit of the rules" by conceding to fender and lighting requirements in a decidedly minimalist fashion (employing Western Auto bicycle components). Tech inspectors were not amused, and demanded a rollcage in '69, which Craig purportedly crafted from a bed frame found in a dumpster. Following a subsequent fling with a slingshot and a Kansas City repair shop, Craig passed in 2000. (Photo courtesy of Steve Irvin) 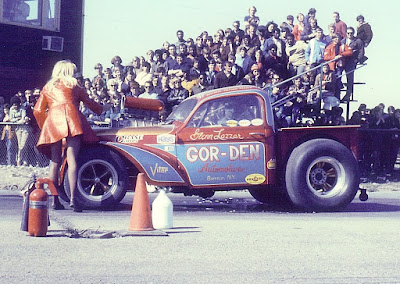 By now, dedicated SGE readers are feeling pretty intimate with our Portland, Oregon correspondent, Marty Strode. If you're new to this page, here's what you need to know about Marty: He's been there, done that, and forgotten where he put the trophy for doing it first and best. Marty was recently reunited with an old friend, and spills the beans here for your eyes only: 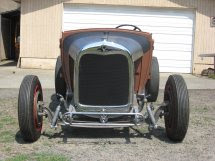 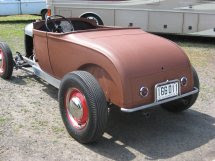 "It's always nice to see a project that you worked on after it's been painted. The '29 Ford in the photos is one I started on several years ago, for a friend in Washington. We used an original frame, and I built a kicked-up rear section." 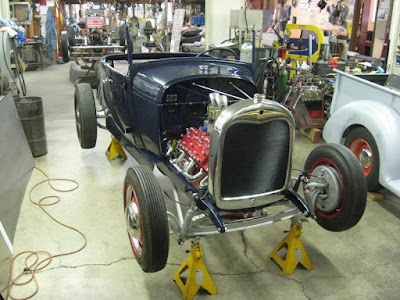 "Trying to keep it traditional (with the exception of a modern 5-speed transmission), we maintained the look of a car that could have been built in the 1940's. I'm doing some small things to help get it finished up." NOTE: "Small Things" to Marty equate to epic engineering challenges to we mortals. 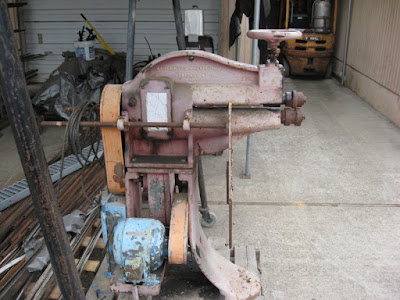 And there's this: "My friend Ernie Martin spotted this bead roller and managed to get a smokin' deal on it for me. It has a 14 gauge steel capacity, one horsepower motor, and will make a great companion to the Niagara unit that I currently use. I discovered a company in Indiana that makes dies for any profile you can dream up, to fit all machines. Over the winter, we'll get it cleaned up, painted, and back in service. I am clearly a lucky man!" (Photos courtesy of Marty Strode) 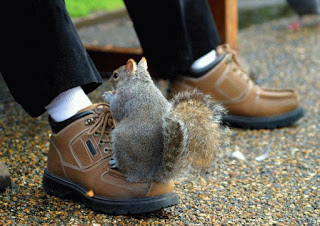 Does your right foot begin to feel a little squirrely when reading about drag racing? Yeah, mine too. 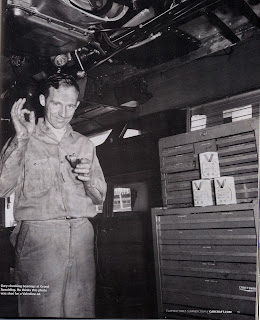 In light of this week's subject matter, we revisit Chicago's Gary Dyer, using the "Mr. Norm" Factory/Experimental for a hat in 1965, while posing for a Valvoline photo shoot. (Photo courtesy of carcraft.com) 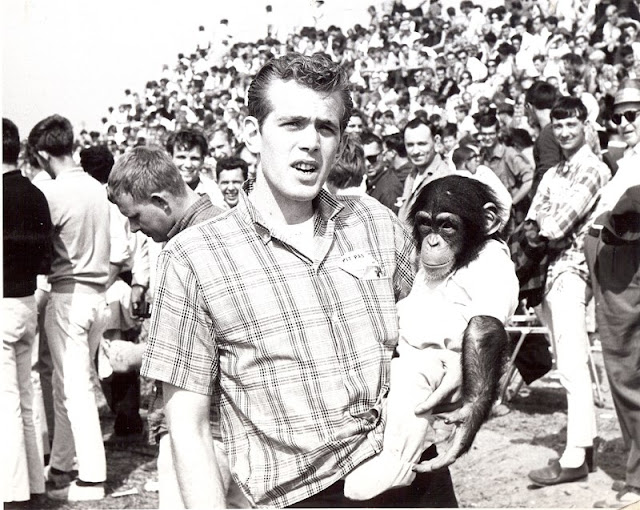 Hey, it was the Sixties and we were irreverent, okay? This example comes from Niagara Airport Drag Strip. Note pit pass in human's pocket. (Photo courtesy of Dean Johnson)