DIG THIS OR NOT 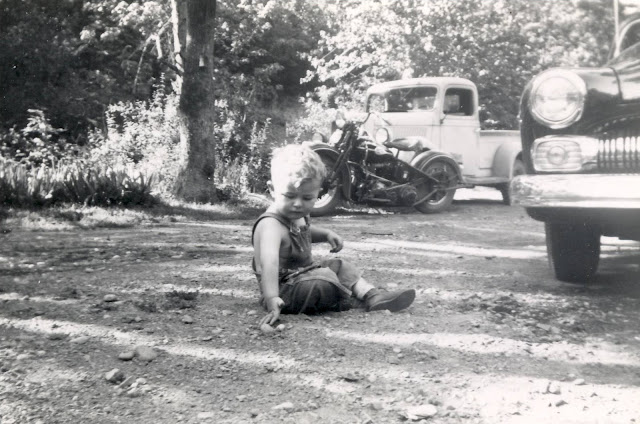 In 1958, two-year-old Scotty Gosson had no concern for what may lurk around the next corner. He had his hands full with the down-and-dirty realities of the moment. Already a lone wolf, Gosson went on to become a full-blown isolationist. Considering the kindred spirits gathered around him, this may seem odd. It is not. Featured driveway ornaments at this family gathering include Uncle Walter's Harley, Chevy pickup was Gosson family car de jour, and the Mercury was his Uncle Jim's. (Photo courtesy of Scotty Gosson collection)

You deserve a break. After being force-fed spam and Kool Aid for weeks on this blog, here's the plop-plop-fizz-fizz relief you've earned fairly and squarely with your loyal support. Thank you! Today we abandon all marketing tactics, and offer you a chance to interact with us regarding the real business of life.

Caveat Emptor: The following is merely the opinion of an uneducated bonehead. I may have a different opinion next week. I am not a trained psychologist, nor have I played one on television. My apologies if it comes across as preachy or judgmental. I'm new at this.

Of all people, it was Uncertain T owner/builder/promoter Steve Scott who instigated the experiment. While interviewing Scott for a piece in my America's Wildest Show Rods book in 2013, our windy phone conversations changed direction constantly and strayed to some mutually unexpected places. We soon found that we shared a fascination with the "hook" of hot rodding, and agreed that the attraction was ego-driven, fear-based, and developmentally crippling. That's how it played out for Steve Scott and I, anyway. It just took us a few decades to realize it. Ever since that interview, Scott has insisted that I abandon my fluff-based writings to explore the psycho-emotional framework of hot rodding. My resistance to the suggestion was quite telling. To write out loud of such taboo territory seemed almost an act of betrayal to my readers and heroes. Scott ricocheted that silence would be a disservice to my peers, which gave me pause. I chewed on the challenge for three years.

These discussions continue today, but the only palpable action taken so far has been a primal scream-like exercise in free-form improvisational typing, with eyes closed and ears plugged (at Scott's urging). Besides the inevitable hieroglyphic dyslexia, the result also revealed a surprising tone of judgement, where assessment was called for. I was stunned. I recognized the finger-wagging as the same I've directed at myself for 59 years, but didn't realize I'd been flinging it around. This is when I realized that Scott was on to something important here, and I had some digging to do.

A few pages of  memoirs have been added since, but it's been a painful struggle. Autobiography does not come easy to me. I love to write about you, but telling my own story feels more megalomania than contributory, or even cathartic. I remain conflicted. Below is what was produced during the experiment, edited for lucidity:

Kicked out of vacuous black holes by God’s own throttle stomp, they blasted straight into our culture with high-beams blazing and wagging tails afire. And the cosmos shook with the rhythm of life itself, while backing a snake charmer melody played on the straight pipes of these mechanized minstrels. Yet I heard not a note. For I am deaf. Dumb. And blind.

Melodramatic, sure. But would you have read further if I had just told the truth? That I was a scared little twerp, trapped in a state of perpetual inadequacy, and painfully oblivious of my potential? That I sought refuge from my fears under the hoods of countless jalopies on the edge of every town I hid out in? Who wants to hear about that? No one who came to the party in search of sparkling dinner conversation, that’s for sure.

So I kept my fear tucked under my hat for twenty eight years, and did the same with my joy for another twenty nine, once I discovered it. Fifty-nine years seems a bit long to keep a secret, or a hat. So today I doff the chapeau and reveal all.

As a grunt soldier in the fabrication army, I’ve been blessedly honored to have connected with many talented and inspiring people. And from the beginnings of my career, I've felt unworthy to hang with most of them. Unqualified to consider myself a contemporary, I look up to them. Early on, I began referring to myself as the Barney Fife (and later, Forrest Gump) of hot rodding. There’s a lot of truth to those titles, no matter how you perceive them. This is (some of) my baggage.

As the friendships with my fabrication heroes piled up and I got to know them, some intriguing personal quirks began to reveal themselves. I began to see in these students of creative craft an obsession bordering on outright terror of any distraction from their narrow focus. Some had interests and hobbies outside of hot rodding, but kept their blinders on tight, regarding social and interpersonal awareness. They just didn’t want to know about it. What I had long perceived as admirable determination and dedication now appeared depressingly dysfunctional to me. I was disappointed - in them (for not meeting my unrealistic expectations), and myself (for being a card-carrying herd member).

My idols, who had studied under the great masters and became such themselves, now express little interest in their teachers as individuals, or in people in general. In addition, their perceptions of basic sociology seem dated by several decades. This initial eyebrow raiser prompts the base question: Why are we such stalwart hot rodders? What's the real hook?

Okay, that was then. It was an experiment. Today, in the year 2016, I finally pose the question to you, the SGE Nation: Does such a hypotheses warrant investigation? And if so, would anyone care to explore the findings? After all, taken at face value, hot rodding is absolute romance. But get some perspective, and the shine fades - or glows, depending on our willingness to come to terms with the reality under the hood. The apparent bottom line is an ingrained belief that nuts and bolts are more relative, trustworthy, and predictable (and therefore, safer) than human beings. Duh. That red flag stench can't be buried very far under the surface. Where's my shovel?

Can you dig it? Or did I just drop a turd into your punch bowl? I know you'll answer with the number of hits on this post, but, as always, I encourage you to share your take in the comments box at the bottom of the page. Thanks in advance for your feedback. 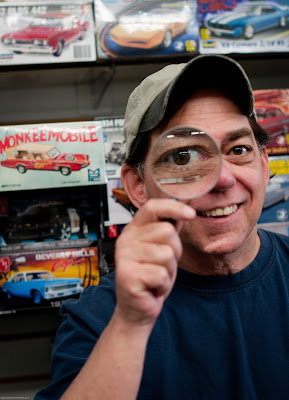 Still digging, after all these years. Aware that I'll never get to the bottom, I just savor the process, and trust it to guide me to my intended destination. (Photo courtesy of Mary Wilkins-Kelly) 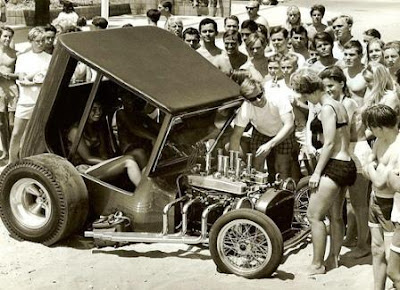 If you're the coolest guy at any given gathering, it's pretty hard to see anything uncool about it. That was the case for Steve Scott, until viewing hot rodding from the other side of the camera, as a Petersen Publishing Company photojournalist. Through the lens, Scott witnessed the exploitation of countless desperate egos, willing to pay any price for ill-perceived glory. Sad. As seen above, Scott was definitely human himself, but ultimately walked away from the scene. For about fifty years. He's better now. (Photo courtesy Steve Scott collection) 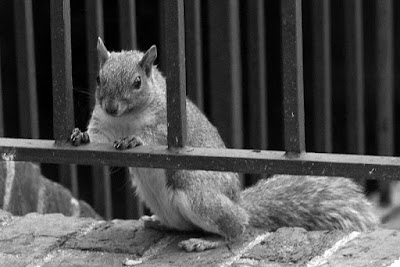 Feeling trapped in your old perspective? It happens. But freedom is usually waiting right under our noses. Hightail it out of there and climb a tree or something! (Photographer unknown) 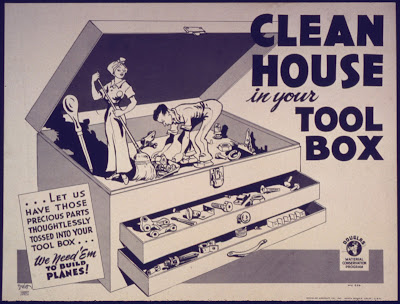 Okay, so you're not a tree climber? Spring cleaning is therapeutic. The instant gratification alone is enough to put some cut in your strut, Jackson. Still not motivated? Jeepers, Joe! Just do it for Old Glory! Pitching in and doing your part always feels swell. Keep 'em flying! (Artist name withheld by U.S. Department of Defense)

While today's sermon was mostly directed at those who may feel they're too old to change (what a crock), it's the younger readers who can best benefit and carry the message forward. We're guessing both young and old can relate to this helpful visual aid, contributed by SGE Human Services Director Motormouth Ray. (Visual aid courtesy SGE Human Services Director Motormouth Ray) 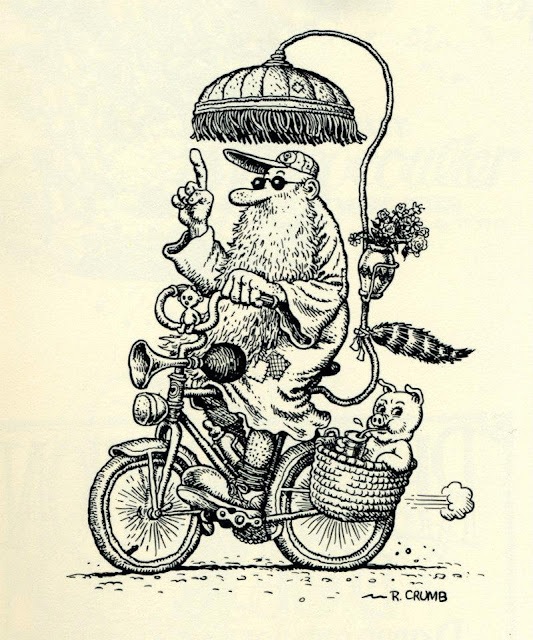 So, what does it all mean? How the hell should I know? Look, I just risked alienating every hot rodder on Earth (a surefire recipe for career suicide) by starting this conversation. It's up to you to continue it. If you feel the need for a guru, go ask Mr. Natural. Spoiler Alert: He'll tell you, "Don't mean shit!" So you'll have to ask the guy in the mirror. (Image courtesy R. Crumb)