DOING THE HEARTLAND SHUFFLE WITH EASY JACK AND THE O'BRIENS 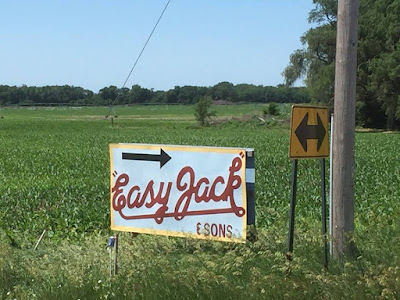 Apparently, it's old home week. While researching, I came across this image that Paul Kruse (Mayor of Poverty Flats, Kansas) posted on Facebook, and it hit me like the wet kiss at the end of a hot fist. Or something like that.

True. I was researching a drag strip in Arkansas. Just keeping my head down, minding my own business. When the Easy Jack sign reached out and knocked me upside the head with the momentum of forty years behind it. I used to work there, in 1975. Fresh from Uncle Sam's death machine, and subconsciously seeking solace, Easy Jack's Antique Auto Parts was the answer to a question I didn't remember asking. Just outside of Junction City, Kansas (the prototypical depressing Army town), Jack's offered the soothing peace and quiet of nature, juxtaposed with acres of vintage tin. Perfect!

Jack and his sons were dirt track stock car racers. I joined them for a few beer-fueled trips to local tracks and was even pressed into service one night. They ran a smallblock Chevelle and a 6-cylinder '57 Chevy. Two cars = Double the odds of a trophy. We arrived late to the track that night (imagine that), so I was dispatched to warm up the '57 while they tended to more important business (use your imagination). My first experience as a hired shoe in a dedicated race car (my pay was a warm can of beer, like I needed another one of those. But that's how I rolled in those days). The '57 ran a 292 with stereo one-barrels on a fabbed intake, backed with a 3-speed.

Once the engine had heat, I rolled it out onto the track. The other racers had already made their warm-up laps, so I had the track to myself, before a standing-room-only crowd of fans in the 'stands. Surprised by the torque of the six banger, I couldn't resist testing the traction at the top of first gear as I approached turn one. I found second gear and let out the clutch. That was "all she wrote" (in dirt track parlance). The graceful drift through the turn that I had envisioned never happened. Instead, an awkward nosedive straight into a phone pole broke the tie rod and a spindle. I remember being grateful for the steam from the broken radiator blocking the crowd's view of my red face. And that's all I recall of that night.

Back at the shop on Monday morning, I was told to find replacements for the broken parts and fix the car - a simple job that took me all day to accomplish. But I kept my job. I later bought a cherry-pie '48 International 1/2 ton pickup from these guys on the Easy Jack/Easy Pay program for $200. It served as my daily driver for five years. I absolutely loved that job, but sabotaged it in the end. When I discovered a trunk full of college textbooks in a new arrival one day, I threw them in the truck cab as a gift for my low-income friend (and single working mom) Mary, a KSU freshman. Jack called me into his office the next morning and fired me for theft. I was devastated then, but see the experience as an educational gift of another kind, today. Thanks, Jack. I loaded my worldly possessions (a hot smallblock I'd built for my '65 Nova street racer, and a pawn shop guitar) into the truck bed, pushed my pal Spider Crider into the cab, and drove home to Oregon. At 45 MPH. On the shoulder of the freeway. For 1,700 miles. Another story for another blog. 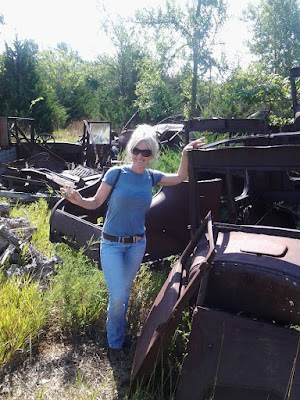 I've heard that Jack's is pretty much picked over today. It was jammed with treasure during my tenure there. My "yard car" then was a '56 F-100, loaded for bear. Those were very sweet days for an invincible nineteen year-old with a wrench in his pocket and a taste for crusty tin. And warm beer. This photo was posted to Paul Kruses' site by Larry Bettenhausen. That's Larry's sweetie (name unknown) posing as me for illustrative purposes. Thank you, madam. (Larry Bettenhausen photos courtesy of Paul Kruse)


This week on CHASING THE O'BRIENS:

Leg One of the O'Brien family's cross-country station wagon adventure was a 95% success. Other than busting an axle in Las Vegas, they made it from Los Angeles to Chicago drama-free. The following are the updates I received from the O'Briens this week on Leg Two: Chicago, Illinois to Witchita, Kansas (the long way). Read the captions and weep. Then turn off the computer and start your own epic journey. Before it's too late. 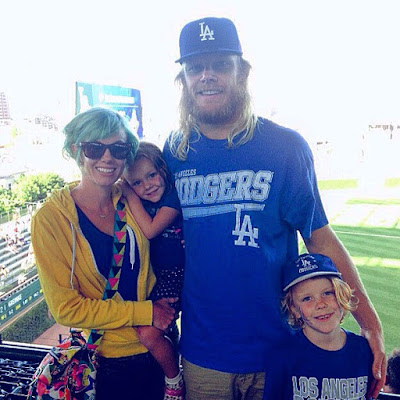 Supporting their home team ("The Boys in Blue") at Wrigley Field in Chicago. 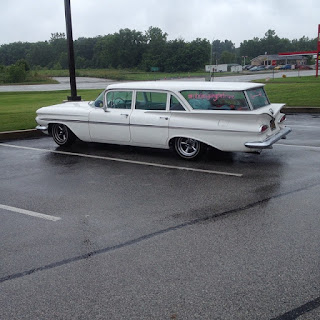 They visited a Wendy's restaurant in Indiana. In the rain. Daredevil thrill-seekers on wheels! 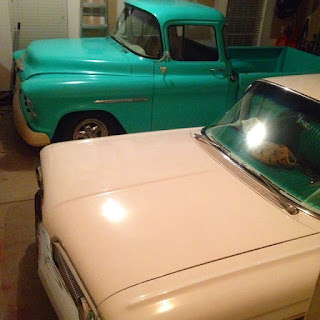 The wagon made a new friend in Springboro, Ohio. And everyone got a shower. 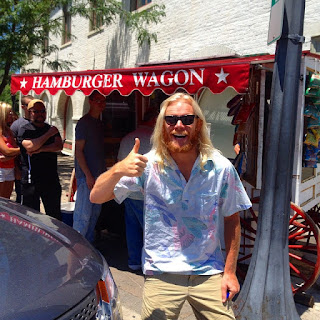 Guilty pleasures exposed at the Hamburger Wagon in Miamisburg, Ohio. 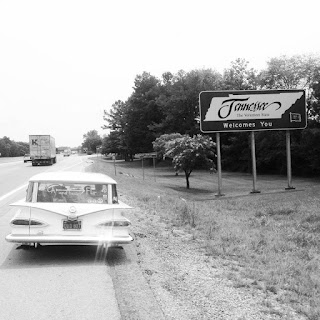 Day nineteen, state twelve. Note Florida destination graphics on backlight. That wasn't in the script, was it? (Photos courtesy of Shawn O'Brien)

Love the O'Briens? Who doesn't? They're the new Cleavers. Vote for them in the 2015 New Blood competition, and they might win enough gas money to come back home. http://royboyproductions.com/…/2015-new-blood-award-people…/

We've been pitched yet another curve-ball by the warring Strode brothers, Marty and Tom. In the most intense case of sibling rivalry this side of the Jackson Five, we've witnessed the Strodes battling each other on dirt tracks, drag strips, city streets, the Bonneville salt flats, and most recently, in separate shops, where they nearly one-upped themselves to death while building "top this" custom motorbikes.

At a June 29th early morning press conference in Portland, Oregon, Marty Strode dropped this bomb:"After all the work we did this past winter, our plans to take the bikes to Bonneville have changed. We couldn't bring ourselves to take them out on the salt and mess 'em up. So Tom and I have hatched a plan to assemble a 1950 Cushman that was given to me a dozen years ago. Tom brought in a 212cc engine and torque converter, and we mocked it up. It's going to work out great. We've already named it the "Tetanus Shot", as it will not receive any paint or polish." With that, Strode made a beeline from the podium to the restroom, where he locked himself in and refused to take questions. 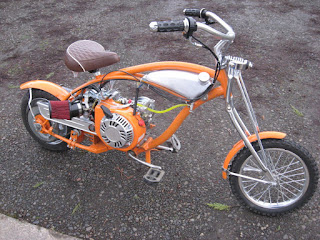 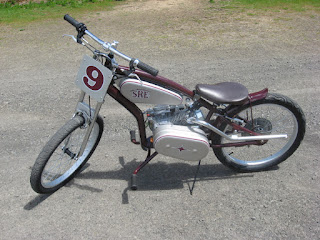 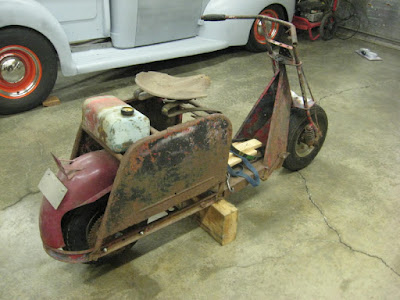 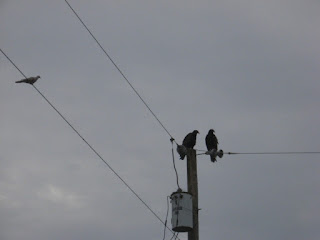 Included in the press kit were these handouts from Marty's shop, Strode Racing Enterprises. Printed on the back: "I think these buzzards must be waiting for me to test drive the Tetanus Shot." (Photos courtesy of Marty Strode) 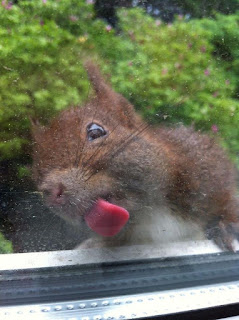 It's hot out there. Crank the A/C and get some condensation going on those windows. A neighborhood squirrel's life could depend on it. (Photo courtesy of Debbie Church) 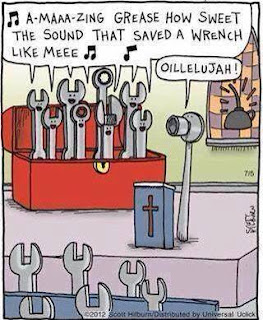 In tribute to last week's stirring speech by the Resident of the United Snakes of America. Happy Independence Day to one and all. Remember, we're all in this together. And no one gets out alive. (Image courtesy of Motormouth Ray) 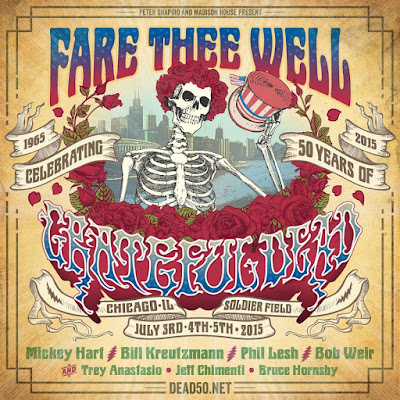 A sad day in Mudville: Upon hearing of the Grateful Dead's reunion/farewell show in Chicago on the 4th of July, I almost asked the O'Briens for a lift to the City of Big Shoulders. Then I chickened out and considered hitch hiking there, instead. At that point, I checked into ticket prices for the Soldier Field performances and was slobberknocked. My research revealed a rockbottom retail price of $257, for an obstructed-view seat at the furthest distance from the stage. Up-close-and-personal front row seats retail for $6,500 (includes snacks and drinks). Deadheads who petitioned the city for permission to sleep in the adjacent park were denied due to "security concerns", and area motels quadrupled their rates. The last Dead show I paid to see cost $9.50 (in 1978). They performed for four hours to a crowd of 500 people. It was the best show I ever saw them play.

This development makes me all the more grateful to have enjoyed my days with the Dead family (albeit on the periphery) at a time when fans were invited to share the intermission meal with the band. And if you couldn't make the haul to a particular show, you could trade your bootleg Dead tape for one of the performance that you missed. Conversely, the Chicago finale will be simulcast to various venues around the globe (mostly movie theaters), charging admissions up to $45. A concert venue local to me is advertising the simulcast, but refusing to post ticket prices until the doors open. Being a lowly worker bee, I can't afford the gas to get there, anyway. Working Man's Blues, indeed. The bastardization of American culture (music in particular) is being exposed in a harsh light this Independence Day. I can't bear to look. You can call this song the United States Blues.


Posted by Scotty Gosson at 1:03 AM No comments: