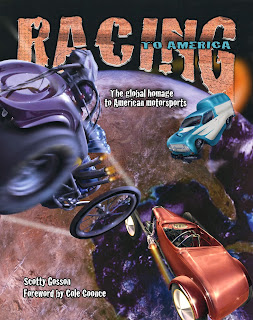 No artist "gets" grassroots hot rodding like Lance Sorchik. Granted free reign to illustrate his take on the narrative within, the Mayor of Jumpstart, New Jersey surpassed all expectations. Again. Thanks Lance! Again. (Image by Lance Sorchik) 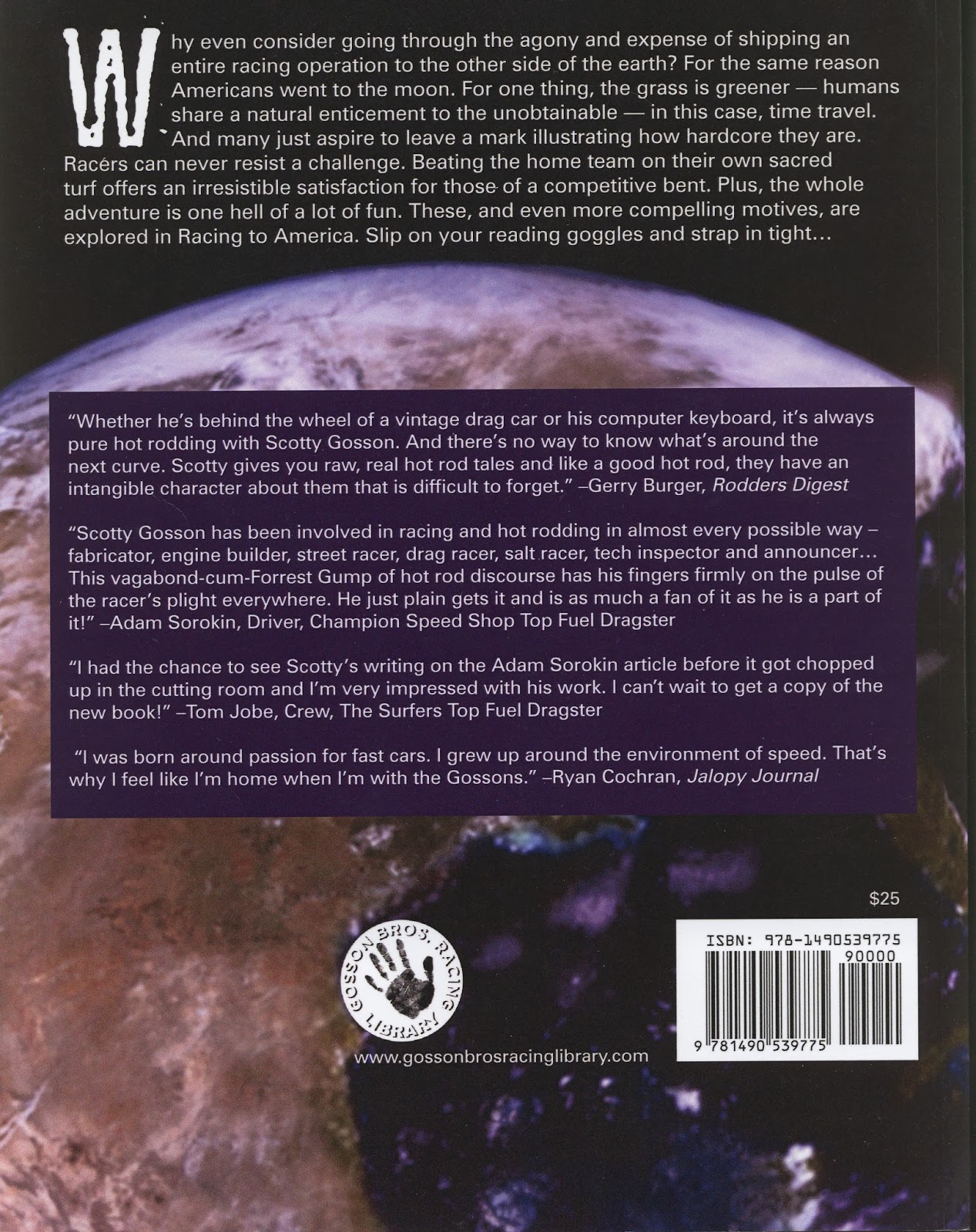 My apologies to any hormonally overloaded hetero women or gay men who may have stumbled upon this site seeking hot porn action. The title is a bit misleading. The only thing being exposed here are the back-stories of hot rod journalism. There are other sites available that probably do a better job than I could regarding those other backsides and hot rods. Allow me to set the scene: I've been writing automotive books and magazine features for a variety of publishers over the years. During that time, I've also been writing for my own amusement on the side - mainly books that my publishers have deemed unprofitable. I recently launched my own publishing empire under the Gosson Bros. Racing Library banner, in an effort to prove said publishers out of touch with the wrenches in the trenches. Today marks the official announcement of the first GBRL release. Racing to America reveals a random sampling of racers from various motorsport disciplines and continents who lived their dream of leaving their marks on American asphalt, concrete, and salt. Check it out on Amazon.com: http://www.amazon.com/Racing-America-Global-American Motorsport/dp/1490539778.

Reporting, chop busting and general clowning (AKA wanking, spanking and pranking) may be the hallmarks of this blog today, but it was founded as a promotional tool to hype my work to potential audiences, editors and publishers. Painfully shy by nature, I can't carry a tune on my own horn. But this time, I'm making an actual effort. This time, it's personal. And so far, this particular leap of faith has been the wildest literary ride of my life.

With three overly ambitious independent books sitting on the shelf and ready to print, the idea for this one wasn't taken very seriously at first. But when I finally dove into the nuts and bolts of scratch-building a book, I quickly realized that my first attempt would have to be a simpler concept than those I'd been sitting on. Luckily, the stories and accompanying photos for this one came quick and easy. It all felt providential and the story arc fell naturally into place. 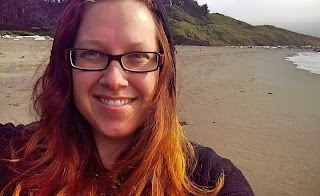 A needle in a haystack who instantly felt like a lifelong friend, Christy Collins is one sweet lifesaver to a lost author and would-be publishing tycoon. (Selfie by Christy Collins)

All was smooth until layout time. With little skill and no equipment, I stuck my hand out to the universe (letting my fingers do the walking) and connected with Christy Collins at nearby Confluence Book Service/White Cloud Press. Christy agreed to be my tour guide for a very reasonable fee and held my shaky hand through the graphic design process. We were total strangers when we met and tight friends shortly after. Confluence/White Cloud deals primarily in what are often referred to as "self-help" books. So they were every bit as baffled as I was when I first pulled my rowdy and ragged street/strip station wagon into their parking lot and wafted into their office on a cloud of over-rich exhaust fumes. I left reeking of incense and tea, confident that I'd arrived at the right place. And drove off with new hope in my pocket. 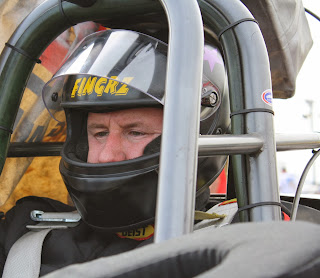 Fingerz Mullan, dialing up the spirit of Wild Willie Borsch before a kamikaze run down Famoso Raceway. Note Kiwi spelling on helmet full of Zen. One tiny example of the culture clash experienced while racing in the U.S. (Photographer unknown) 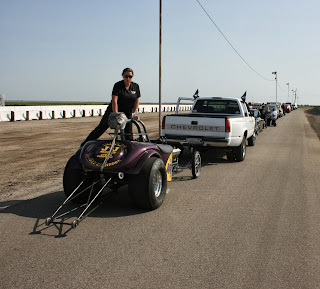 Andi Whitley, doing support duty at the March Meet. That was then. She's now the sole pilot of the Nitro Ape Altered. (Photographer unknown)

My love affair with the creative process is based purely on destiny. Economics have never been a consideration. Living my entire life well below the poverty level has been excellent training for journalism. Never has that been more true than with this project. The last ten months have seen every rare spare dime roll into the book layout. When that was finally declared done, there were no funds for printing and momentum screeched to a halt - until I leaked a sample to Fingerz Mullan and Andi Whitley in New Zealand, who are featured in the book. They volunteered to pay for the initial printing in exchange for New Zealand sales at their Retro America store in Mount Maunganui. Thanks to these genuine hardcore rodders, I then hit the PRINT button and became a publisher. See the result at http://www.amazon.com/Racing-America-Global-American-Motorsport/dp/1490539778

Printing was done via Createspace, which is an Amazon print-on-demand service. Frankly, they were the cheapest (I scrimped on paper stock and saved a bundle by using a matte finish). And being Amazon cousins means that the advertising, sales, distribution and shipping chores will be handled by professionals, so I can just lay back and count the money. Theoretically. Amazon discounts books to the public and also provides authors an option to sell e-book versions of their work, via their Kindle brand. I clicked that button, too. Again, it was Christy Collins who educated me on this minutiae that I previously had no interest in.

As for the book itself, I'm satisfied with the end product, though it is compromised from my original intent. But money does the talking at decision time. And no amount of dough could pay for the education received during this journey. Lessons learned will be applied to the next GBRL book, and so on. Live and learn.

Short of reproducing the entire book here, I offer the SGE Nation the following sneak preview: 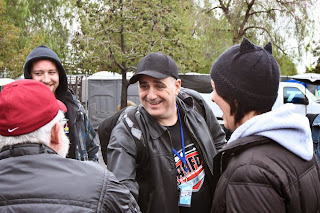 The effusive Cole Coonce composed a one-page Foreword that says more than I could convey in 124 pages, instantly setting the mood for exploring the ying and yang of racing far, far away from home. It's what he does. (Photographer unknown, but I know that's Mendy Fry in the Nitro Kitty headgear, at right.) 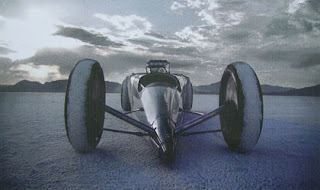 Kiwi Bill Ward set his rock and roll career aside to build this rear-engine T roadster for his triumphant return to Bonneville, 24 years after promising, "I'll be right back." (Photo courtesy of Bill Ward) 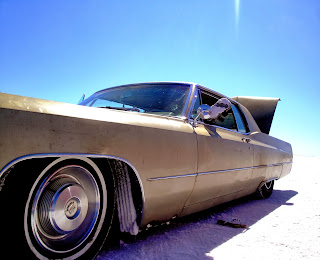 Norwegian Hans Blom figures if you have to bother with getting there, you might as well have some fun doing it. His Coupe de Ville runs an Idaho front plate, with an Arkansas version at rear. Nuff said. But Hans arrived at Speed Week in time to pick up a new red hat. He looks awesome in it, too. (Photo by Michele Abad) 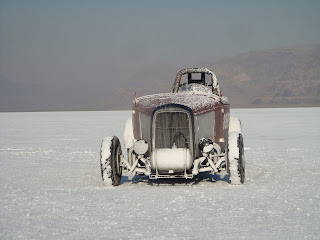 Swiss racer Peter Fontana is a staunch traditionalist. The '32 Ford roadster is his vehicle of choice, but he isn't stingy with it. Peter and company helped several salt rookies license in this car. (Photo by Frank Donnelly) 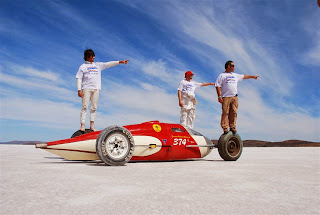 Aussies Doctor Goggles, Reverend Hedgash, and Colonel Grump built their bellytank as found art, then got lost in the process of finding their way to Speed Week. They're still out there somewhere and are bound to appear eventually. (Photo courtesy of Spirit of Sunshine) 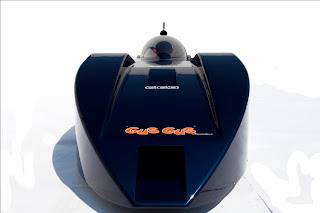 Italians Fabio Montani and friends approached Bonneville via their Formula 1 backgrounds. Their fresh take on landspeed racing made an immediate and permanent impact on the sport. The salt will never be the same - for streamliners, anyway. (Photo by Fabio Montani) 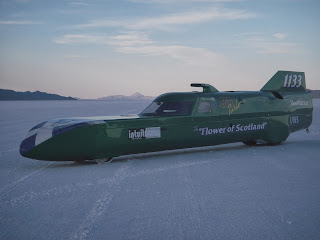 Swiss financier Rick Pearson took a relatively lowbuck path to streamliner competition with the turbo Kawasaki powered "Flower of Scotland". The native Brit claims, "My granny is Scottish, so it all makes sense." (Photo by Coolpix) 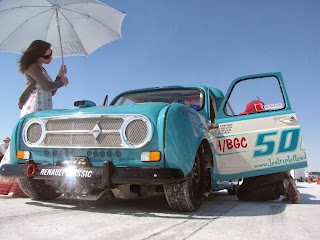 The French "Les Triplettes Plus One" team hit the salt with a Renault postal truck and nobody flinched. This is pretty tame, compared to their previous landspeed entries. This Speed Week visit proved epic as any though... (Photo courtesy of Les Triplettes) 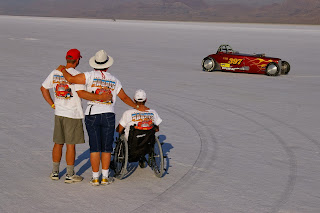 A Kiwi Chapter 1 contender who didn't get featured, but made it into the Epilogue. (Photo courtesy of Chris Harris) 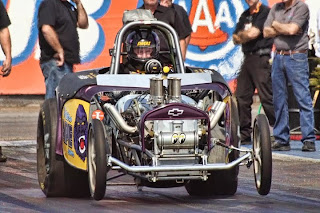 Kiwis Fingerz Mullan and Andi Whitley bought their "Nitro Ape" Bantam in the States, so they wouldn't have any logistics hassles. Right. But they got to live out their dream of wheeling a storied racer down a storied dragstrip. Now Fingerz and Andi are officially storied themselves. (Photographer unknown) 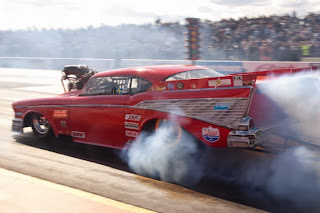 Swede Micke Gullqvist ran his '57 on the European FIA Pro Mod circuit before joining up with Melanie Troxel's U.S. team. In fact, Micke runs the FIA's drag racing sanctioning body. He doesn't do anything at less than 100%. (Photo courtesy of Micke Gullqvist Collection) 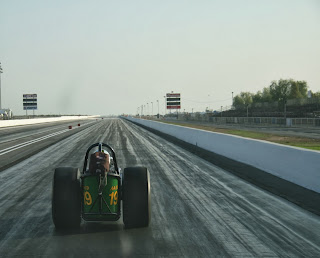 Aussie Ross Preen and family brought the legendary "Banshee" AA/FD to the California Hot Rod Reunion for a scant few moments of running time and went home completely satisfied. I met Ross' son Chris in the pits at an ungodly hour and the dragster was instantly penciled into the book. (Photo courtesy of Ross Preen collection) 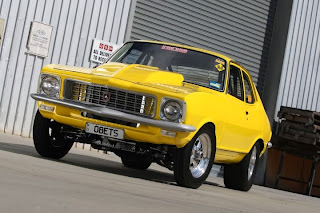 An Aussie Chapter 2 contender who couldn't make the call to the line. (Photo courtesy of Tony Wilson) 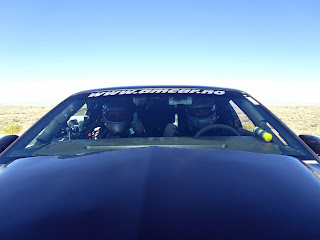 Norwegian Pal-Arvid Blytt represents the public highway leadfeet of the world. Pal's adventures with this '86 Trans Am define high velocity revelry. One example: He was clocked at 253 MPH. In the rain. (Photo courtesy of Polly Motorsport)

Some Chapter 3 contenders (from Australia and Japan, respectively) who didn't make it into the book: 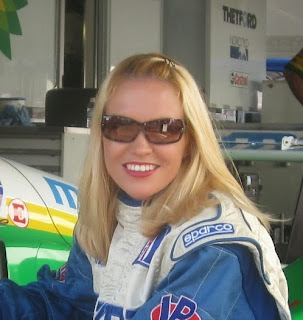 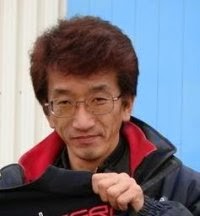 Can you name these infamous tuners? If so, please don't. No one likes a spoiler. And someone could go to jail. Full explanation in the Epilogue. (Photo courtesy of Mr. X)

BONUS: The book includes a free comprehensive shipping guide for those considering some overseas action. This was inspired by my desire to beat my hot rod at England's Goodwood Festival of Speed. It could happen.

The esteemed SGE Consultation and Advisory Department tells me that book reviews are the single most powerful advertising tool today. So please take a moment to write a glowing review of Racing to America when ordering your copy at Amazon.com: http://www.amazon.com/Racing-America-Global-American-Motorsport/dp/1490539778 And please DO NOT write a review after reading Racing to America! Thank you.

And thank God this spam fest is finally over. I don't use the word "hate" casually, but I really hate doing promotion. HATE IT!!!

Did I mention that Racing to America is available now at Amazon.Com? Here's a handy link: http://www.amazon.com/Racing-America-Global-American-Motorsport/dp/1490539778 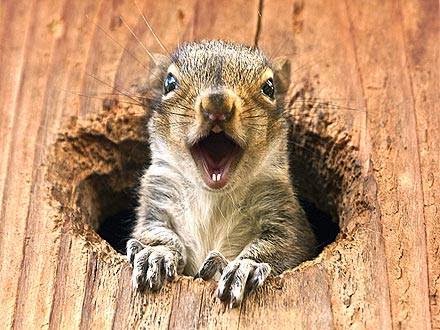 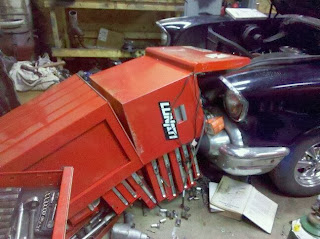 As I recall, the '57 owner was working under the car and asked his wife to get a tool from the box. She was already in the process, when he warned her not to open the top drawers first. It was too late.


NEXT WEEK: 2013 seems to have unraveled on its way out the gate. Racers stood slackjawed on the cusp of a brand new season and watched "proactive" ugliness consume entire sanctioning bodies. The good news is we were overdue for some changes. The bad news: The ensuing adjustment period won't be comfy for anyone. Meanwhile, the NHRA is standing by to see how it all shakes out. Hopefully, they'll do something before next week's comprehensive report.

Posted by Scotty Gosson at 12:01 AM No comments: