BROADWAY FREDDY AND THE CANNOLIS EXPOSED! 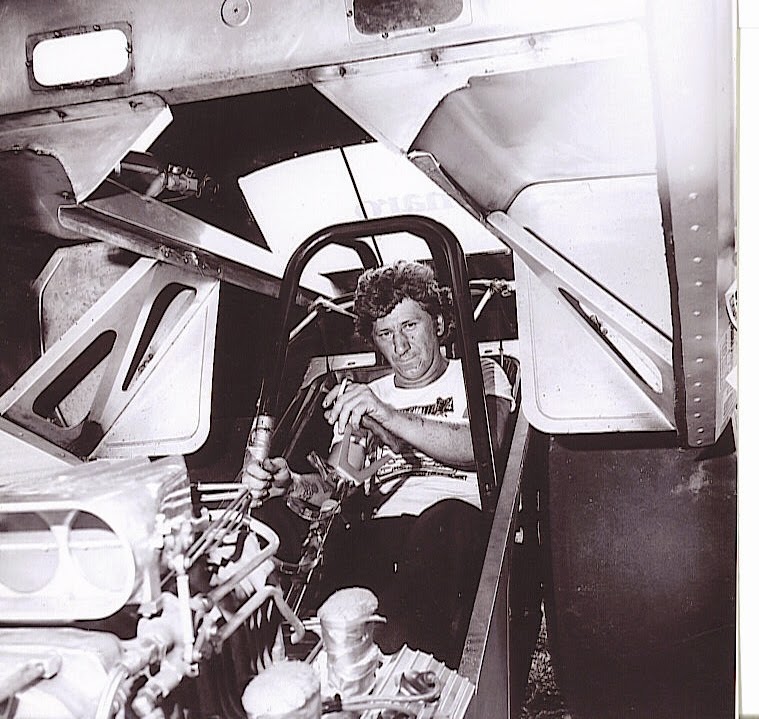 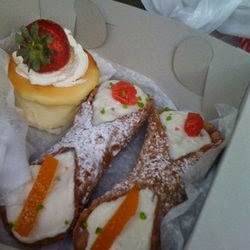 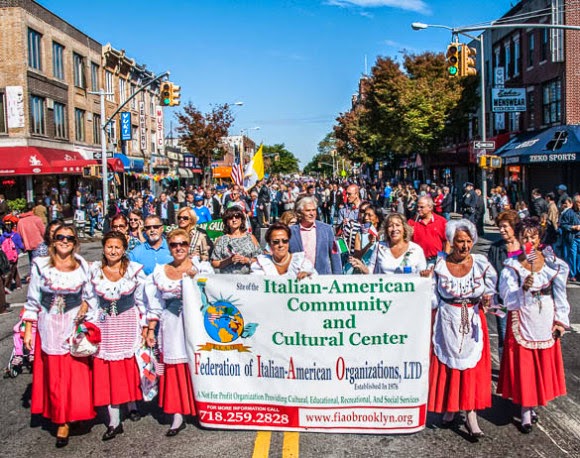 The  Major League Eating Federation knows exactly how dangerously fast a cannoli can be. That's old news to the Federation of Italian-American Organizations, who are quite hip to Broadway Freddy and the cannolis that made Brooklyn great.

It's almost midnight on Monday. I'm proofing the latest top secret Cartech book in hopes of making a printer deadline, while simultaneously fact-checking the next Cartech book, fine tuning the next Gosson Bros. Racing Library book, and overseeing an intense e-mail conversation regarding a possible 2015 book tour of New Zealand. These chores and others must be scratched off before hitting the road for a magazine photo shoot. What, me worry? Ha! I laugh at adversity, thanks to the best friend I've never met, Motormouth Ray. Twenty four hours ago, this e-mail exchange (following Sunday's Motor Mouth Radio Hour) took the heat off:

Scotty: "May Day! Got anything for the blog?"

Motormouth Ray: "Here's an event I might make the trip to see for myself: http://majorleagueeating.com/contests.php?action=detail&eventID=626"

Scotty: "Please cover this for the blog! Bonus points for entering yourself as a contestant. I'll give you a dollar if you enter. Serious."

Motormouth Ray: "Your dollar is safe in your pocket. How 'bout this: http://classicfunnycarboard.com/CFB/index.php?topic=2293.30 ?"

Scotty: "Be advised: If you pass on the Broadway Freddy story, you must do the cannoli gig. If you really want that Pulitzer prize, you'll do both stories and get two dollars!"

Motormouth Ray: "Okay, I'll do it, damn it! Sit tight. I need a little time to diagram this out, fill in the blanks, then trim it to death before sending it to you. Over and out, Jimmy Olsen."

This is what friends do. I publicly thank you here, Ray - for the fun two-for-one story, and for the awesome display of badass friendshippery - but mostly for flicking that little devil off of your shoulder, and honoring the angel on the other shoulder that urged you to take this leap of faith. If you lose your marriage and/or job over this - well, you knew the job was dangerous when you took it.

Ladies and gentlemen, it's story time, with your host, Motormouth Ray.

On Oct. 11, 2014, as part of their Columbus Day Festival in Bensonhurst (a community in the borough of Brooklyn, NY), the Major League Eating Federation is hosting a cannoli smackdown that’s sure to elicit a few groans of “fugghedaboudit” from the bystanders. This is the organization that hosts the annual Fourth of July Hot Dog Eating Contest in Coney Island, so you know they have this down pat. 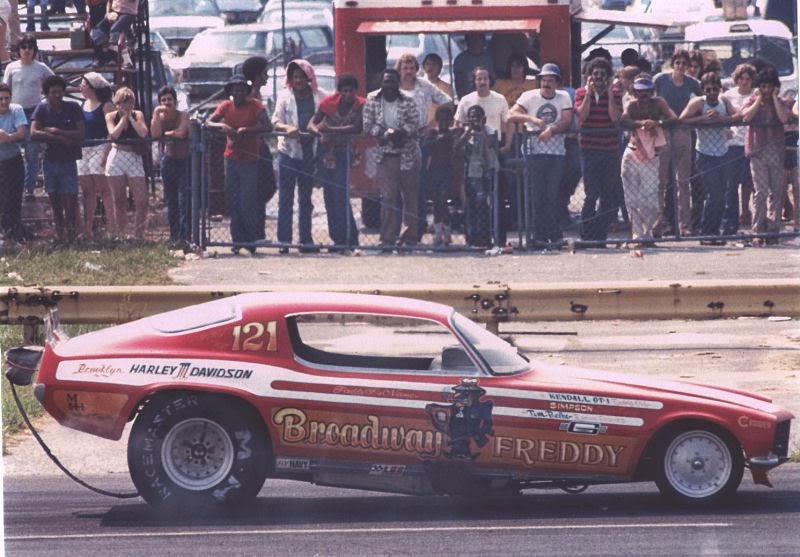 So, what do these flakey pastry tubes filled with creamy deliciousness from neighborhood bakery Villabate Alba have to do with cars? After a conversation fueled by Italian pastry that was brought up recently on Motor Mouth Radio, this reporter got to talking about a local drag racer who hailed a mere six miles from Bensonhurst (in Canarsi, Brooklyn) named “Broadway” Freddy DeNome, or DeName, as Freddy called himself. Since Freddy was illiterate, he really didn’t know if the lettering on his cars was correct or not, and made up for this disability by being the best racer and car thief he could be.

In 1967, after pooling the money gained from his specialty in the 60’s (stealing Volkswagens), Freddy began racing professionally under the moniker “Broadway Freddy DeName” and mostly tore up  track surfaces on the East Coast, because it was rumored that the cannoli’s on the West Coast were made from cream cheese and Polly-O. Among the tracks Freddy raced at, three are shared with this author, namely Englishtown, Atco and NY National Speedway. Not one to be confined to any one form of race car, Freddy ran a Top Fueler at Lion’s Dragstrip in March of 1969, getting squashed by Rick Ramsey in an 8.08 to 8.89 loss. 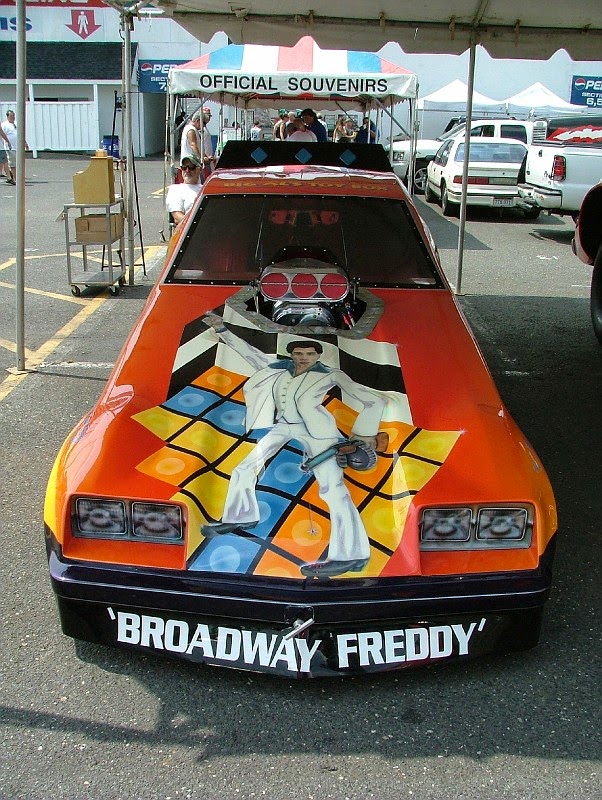 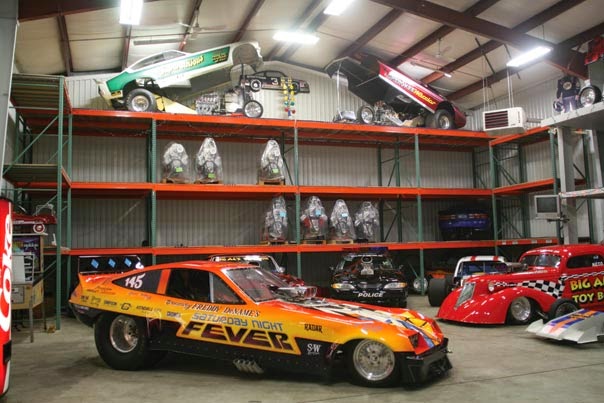 Following the dragster foray, in 1970 Freddy ran a Camaro Funny Car, followed by a ’72 Mustang, a Monza, and ended his career eight years later with the very popular movie-themed ’76 Skyhawk named “Saturday Night Fever”. If you think Freddy was a Brooklyn phenomenon in the 70’s, you should have seen the frenzy over the movie he took his race cars name from. Any car fanatic who ever shook a tail feather at 2001 Odyssey, The Penthouse, or Xanadu in Brooklyn, would have gladly adopted Freddy as their spokesman with a car like that. And let’s face it, not many racers would use an image of one of the hottest current movie stars holding a tommy gun on his car's hood. I’m sure Travolta never thought of complaining, either.

History shows that Freddy worked with the Roy DeMeo crew of the Gambino crime family, in what was termed “the automotive wing” of the organization. He was more successful as a leg breaking, car stealing enforcer than he ever was as a racer. Maybe the long hours of dedication and focus that some racers expend are really worth the effort, after all. Competing just a few times at the NHRA & UHRA Summer Nationals, the New England Funny Car Nationals, and several of Don Garlits’ PRO races in the mid-70’s, Freddy didn’t qualify often, instead spending his time between rounds casing the pits for tasty automotive morsels that might satisfy his “speed-freak sweet tooth” and high performance taste buds. Freddy was reportedly selling illicit items out of the trunk of whatever full sized GM car he was driving at the time.

The year 1978 saw Freddy’s racing career come to an end, after miraculously surviving a fiery crash and competitively making only three races that year (with Harlan Thompson behind the wheel). The DeName team had their best showing at an eight car event at Englishtown, where Thompson ran a 6.69, leaving him with a second place finish against Jimmy King in the King & Marshall Monza. 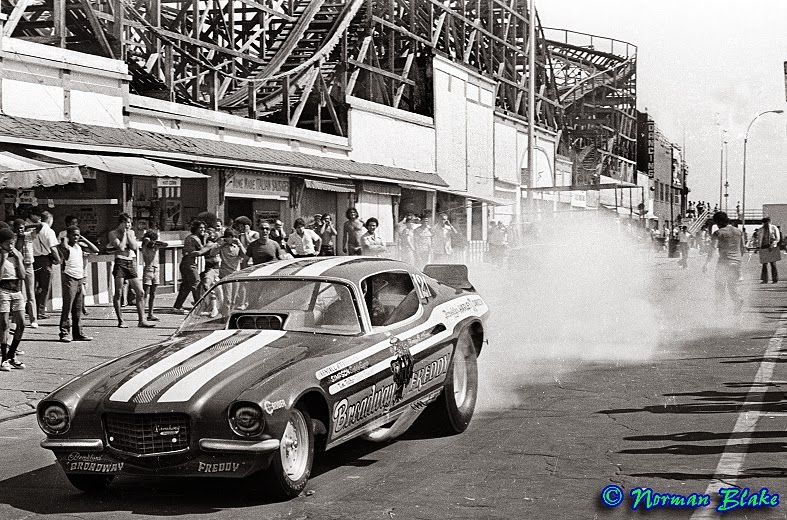 By now, you may be wondering how the hell this guy’s story relates to the Columbus Day festivities and cannolis. I’ll tell you how. But first, allow me to relate my favorite Broadway Freddy story to you: Always the showman, and being oft times compared to Jungle Jim Lieberman as a contemporary (and to John Force as a later example of an “in your face” marketer), Freddy took his Camaro Funny Car down to Stilwell Avenue in Coney Island, Brooklyn in July of 1974 to do a little street promoting of his own. As part of the normal eclectic mix of Carney people, street urchins and beachgoers, Coney Island would occasionally stage static displays to promote one event or another, and on this occasion it was the upcoming event at NY National Speedway on Long Island, featuring Freddy’s Camaro and the Top Fuel car of Ted Cyr & Flip Schofield in their respective classes. Often seen on late night TV commercials for local race tracks, Freddy loved the spotlight, especially if he could let his inner self hang out, unfettered. On this particular day, and not being one for staticness, Freddy got in, fired up, and unleashed his Camaro, doing full burnouts in front of the unwitting pedestrians nearby. It’s been said that he kept circling around, making passes down Stilwell Avenue and sending pieces of debris flying while fully enjoying the ability to deafen the masses, but one can only imagine what was really going through Broadway’s head that July afternoon….was it a creamy cannoli from Bensonhurst maybe?

Back to our story, it sometimes takes a community to raise a child, even if that child is a rogue and untameable animal like Freddy. In its hey-day, Brooklyn was just such a community, looking out for its own, keeping things quiet when the law came asking questions, and certainly not divulging secrets to strangers. I’ll leave it to you to Google Freddy’s name (or nome) and read about his storied, checkered and tormented life yourself. He certainly was no angel, but he was part of a larger group: The racers of New York and parts beyond, who obviously never threw a race when they lined up against him, and whom I believe he respected for it.

Just like the crowd that’s sure to gather in Bensonhurst next weekend, we should all take stock of our lives, call or visit a good friend and share some good cannolis. Not the cream cheese & Polly-O kind either, but the authentic Italian kind, like the competitors will be cramming into their gullets at Il Centro, an Italian-American center at 18th and Benson Avenues in Brooklyn. They’ll be eating like Freddy raced, balls to the wall and taking no prisoners. Just keep an eye on your wheels, as they’ve been known to vanish in broad daylight.

Besides the Internet, you can also see Freddy’s Monza at a place called Big Al’s Toybox in Milford, Connecticut. I know I’ll be taking a trip up there to lay eyes on it, sometime soon. 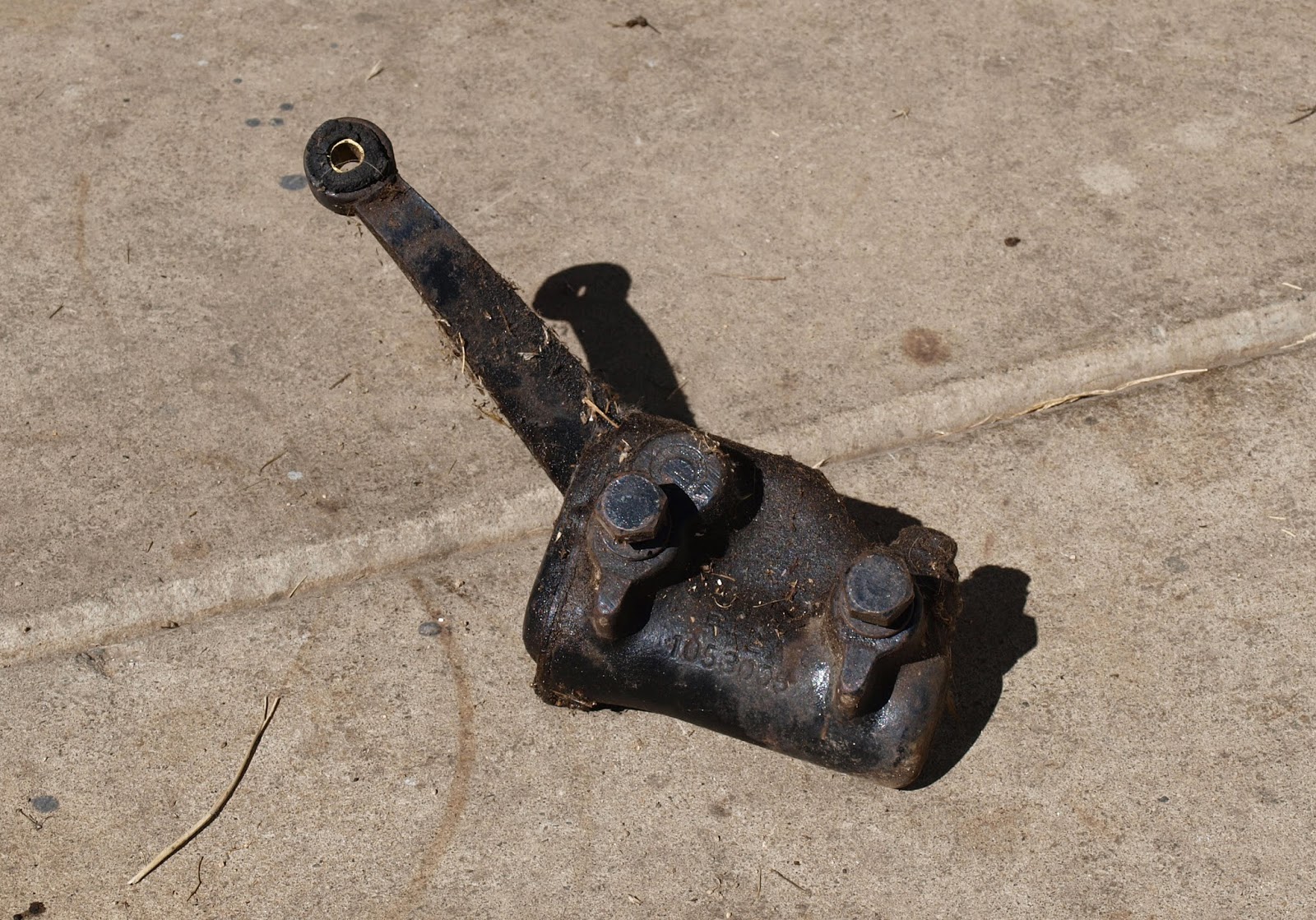 The SGE Model A project marches on, thanks to a set of '40 Chevy pickup shock absorbers that have laid comatose in Dr. Lockjaw's barn for the last few decades. Despite a couple of leaky seals, they still work perfectly. 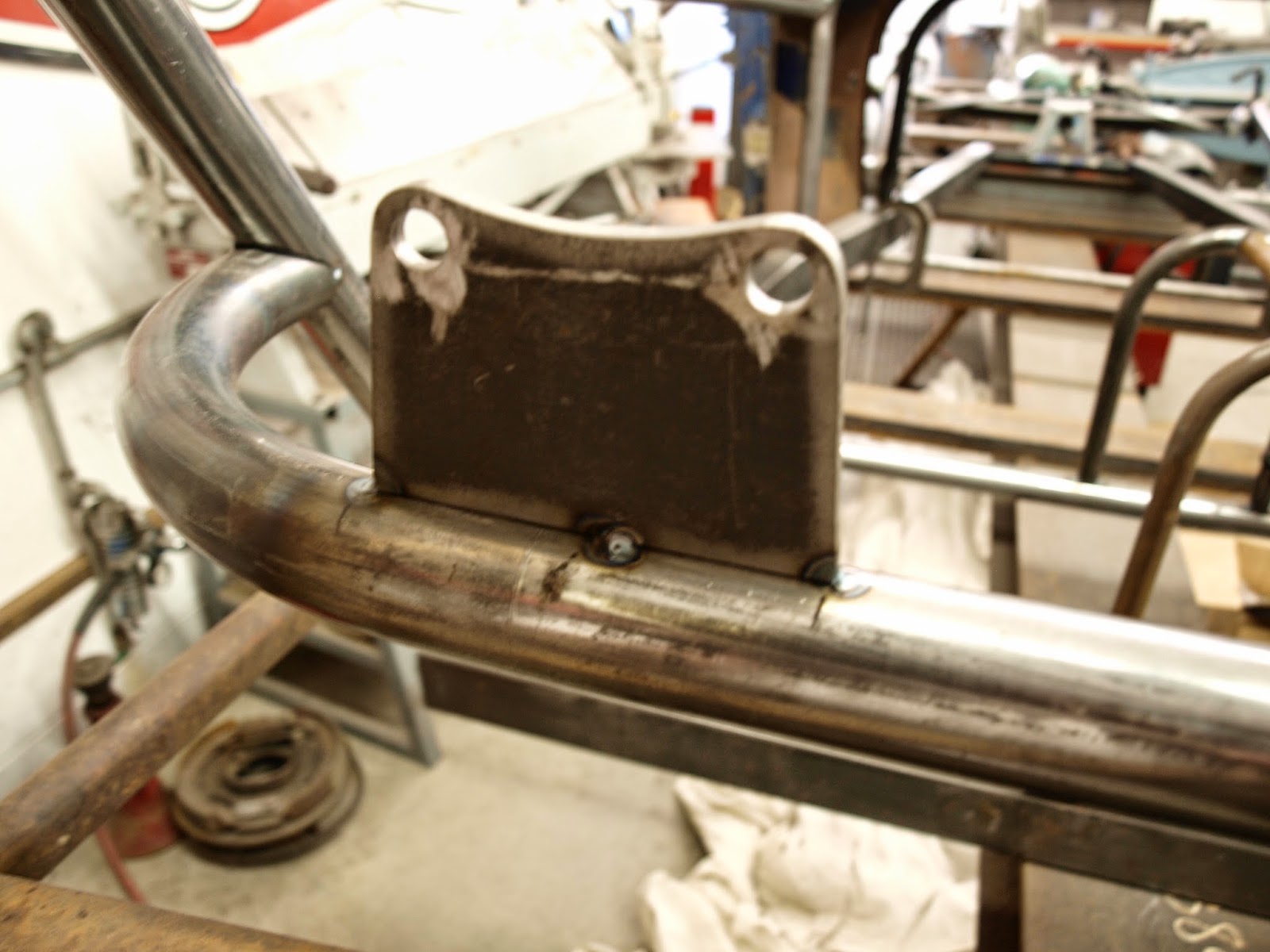 After a few minutes of head scratching, a mounting location was agreed on and a bracket was quickly fabbed and tacked. The bracket appears much less fuzzy in person. 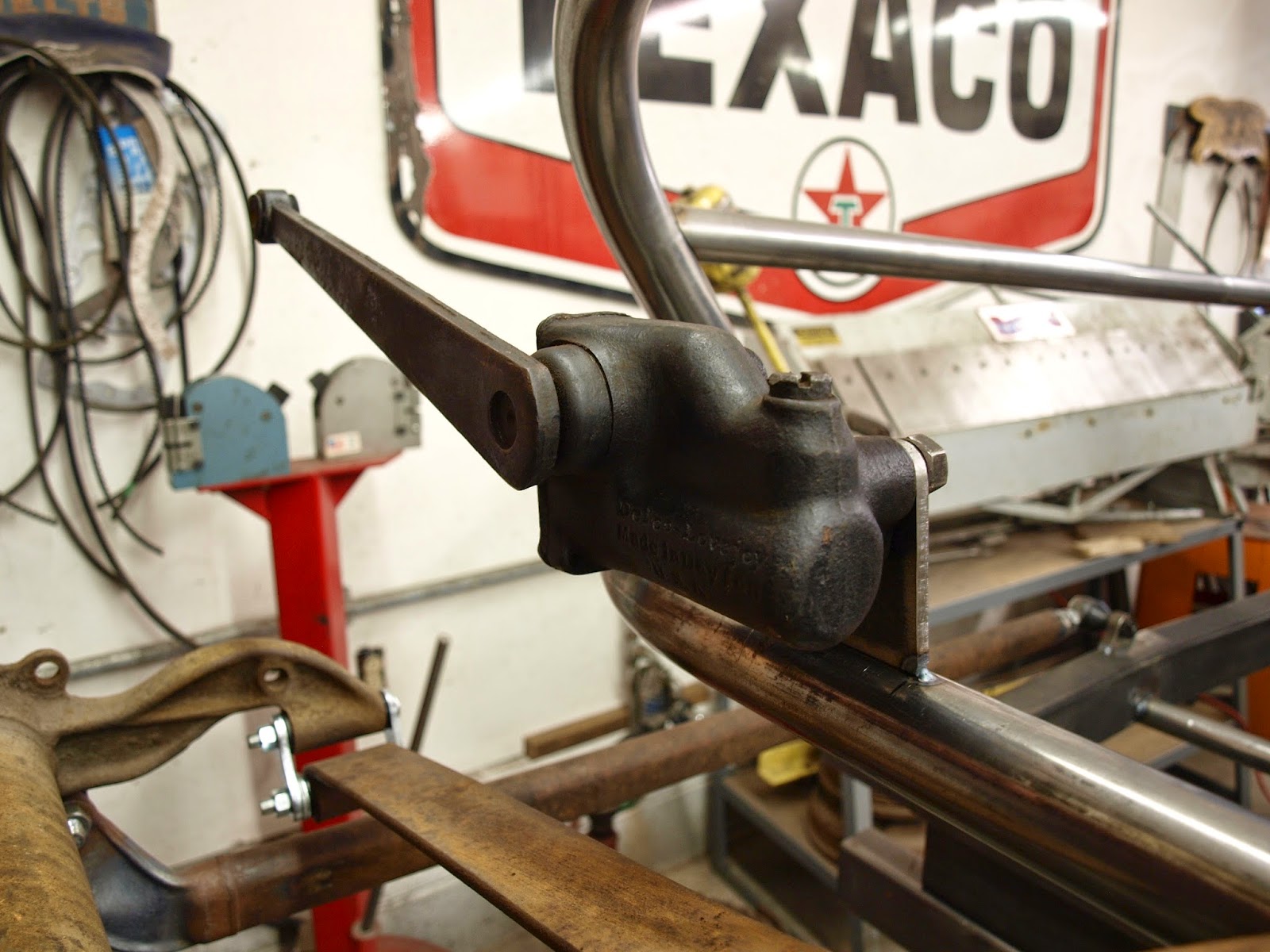 I love this shock design. A fun alternative to the ubiquitous Ford Houdaille, it also blends nicely with the established theme of this project. This driver's side unit illustrates the challenges ahead: How will the body fit around this obstacle and the protruding spring perch? Doc's answer is a canvas body with lots of zippers. 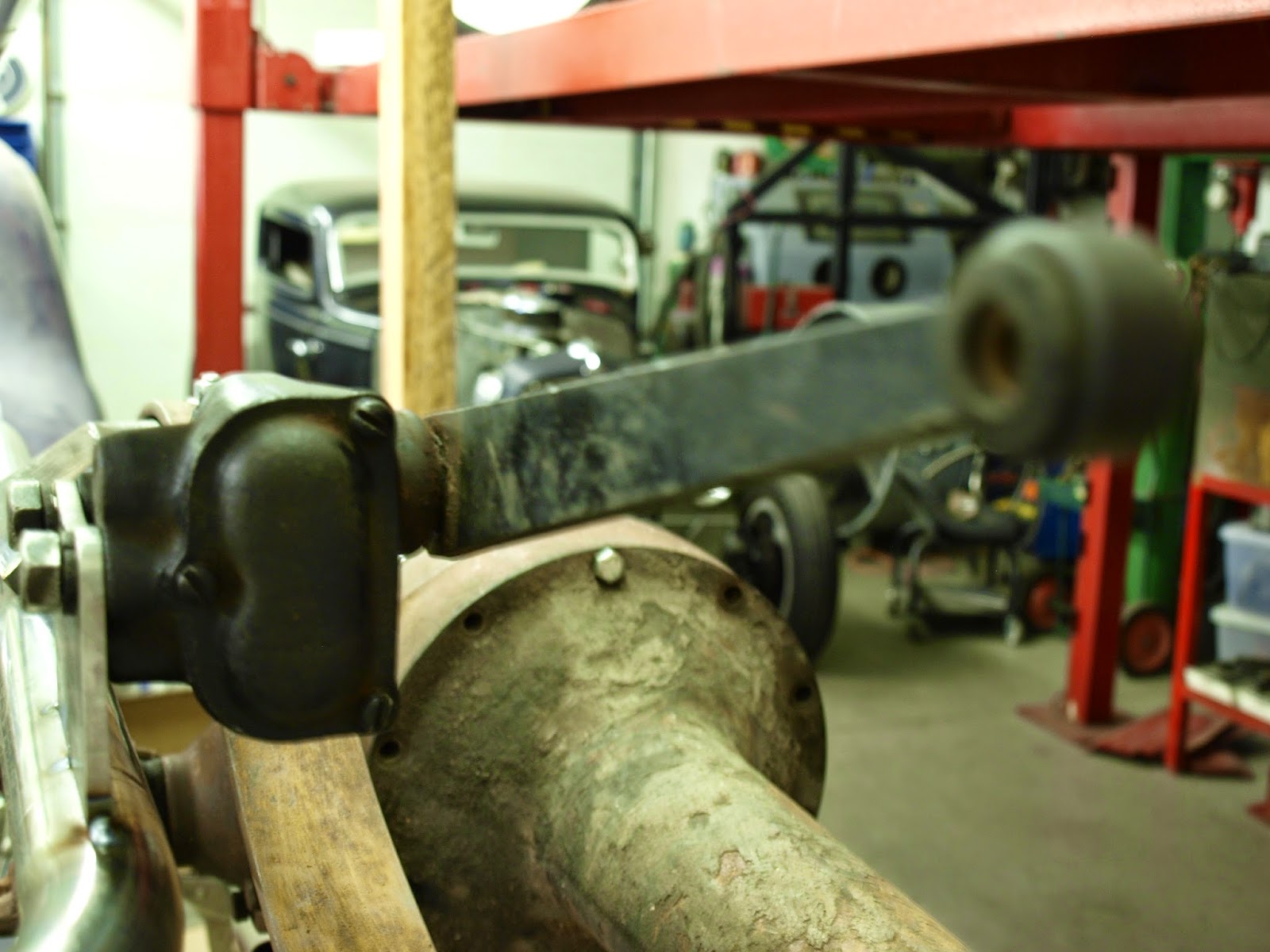 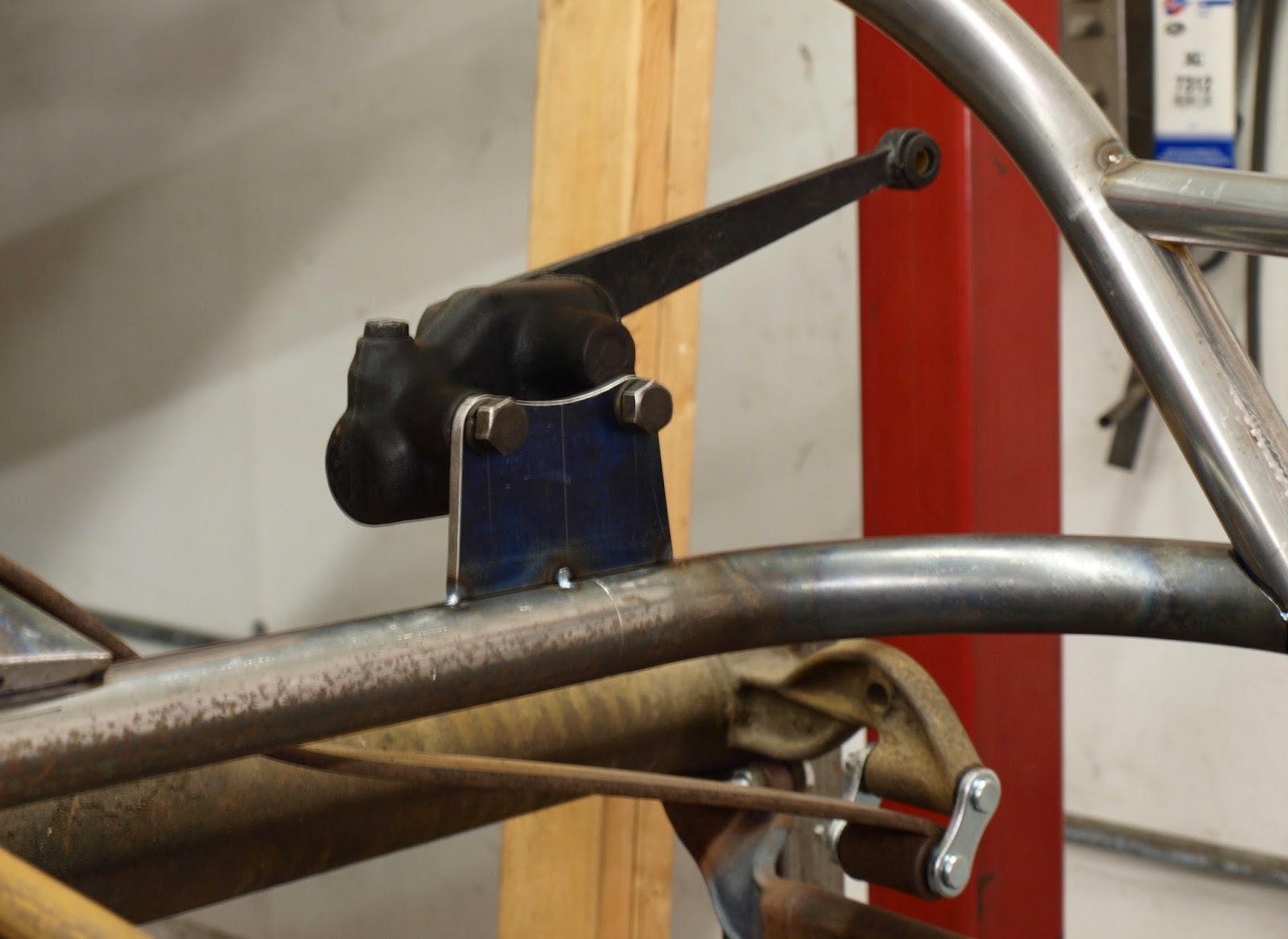 Another angle for you hydraulic shock absorber photo collectors. 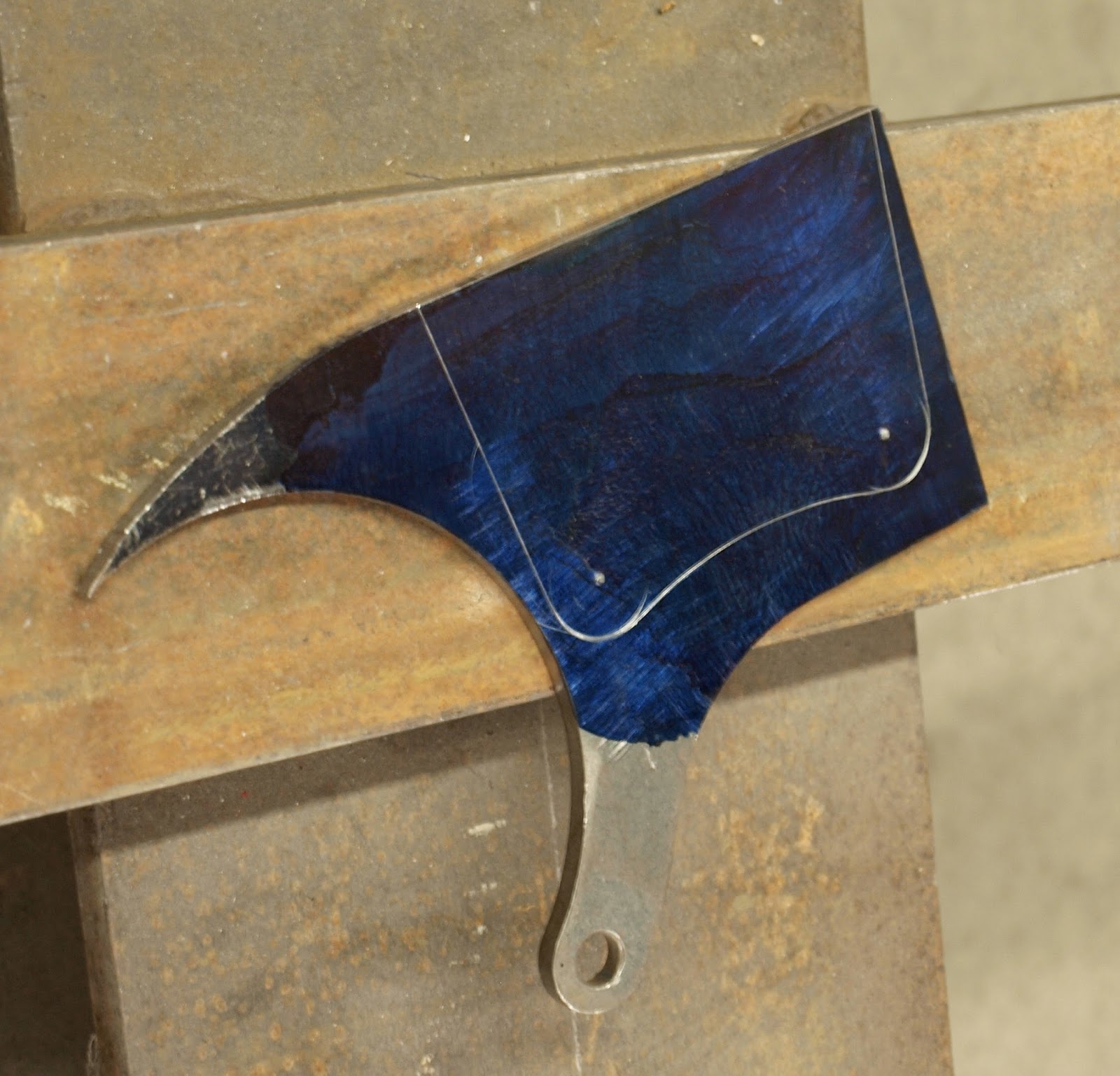 As far as we got on the passenger side bracket before reality called, wanting its priority status back. Note that our brackets are made from old brackets, as our cars are made from old cars. Nothing goes to waste at Doc's Custom Metal shop. (Scotty shots) 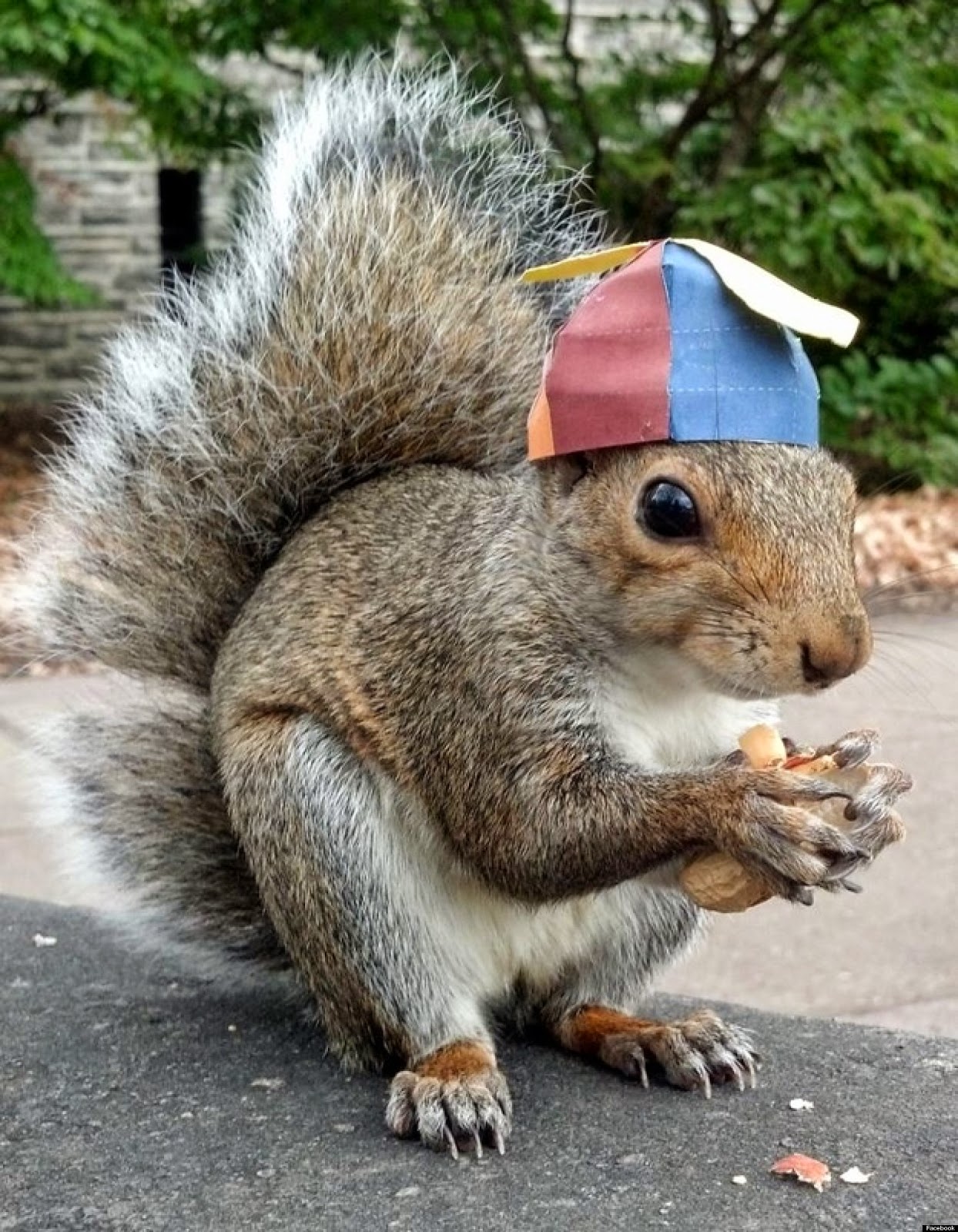 "Sneezy", the official squirrel of Penn. State University (home of the Fighting Nittany Lions!). Really. He eats cannoli whenever he can get some. Otherwise, it's just nuts. 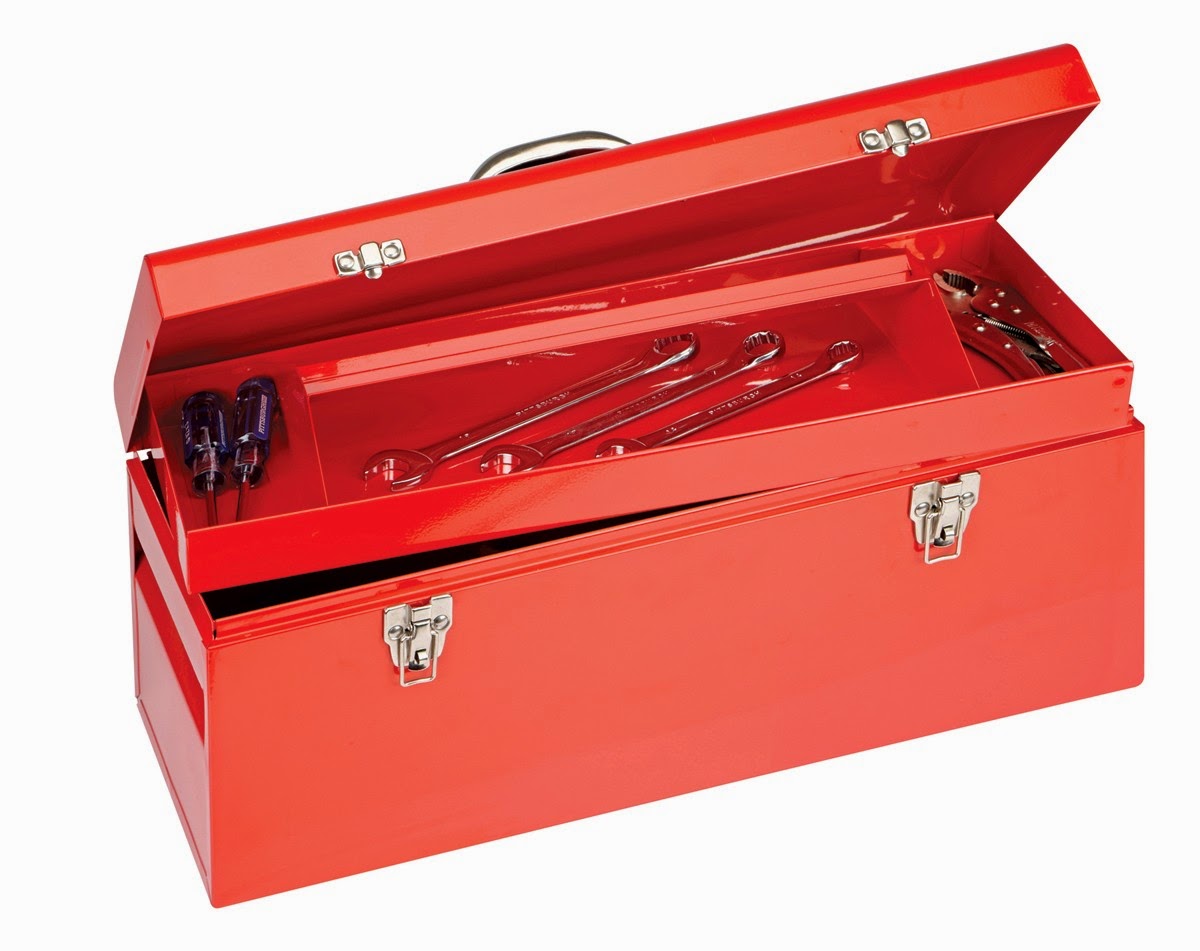 A Harbor Freight "Voyager", the official tool storage of Gosson Bros. Racing (home of the Fighting Toolboxes!). Not really. 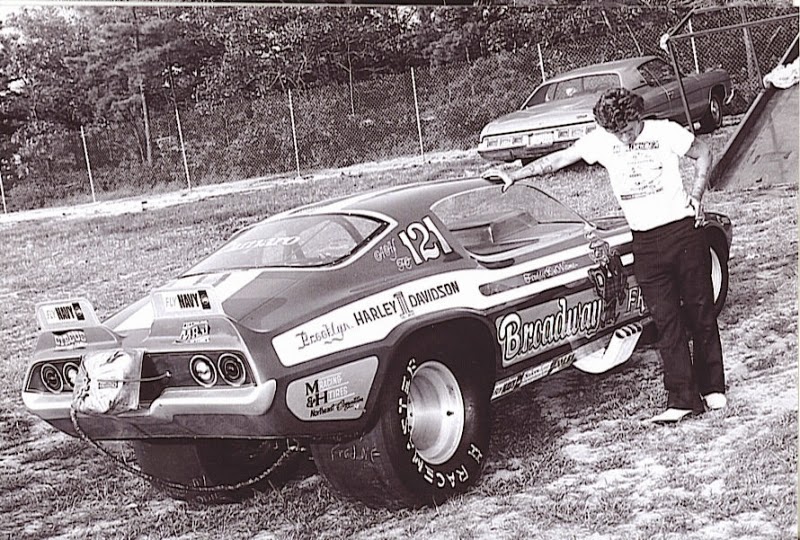 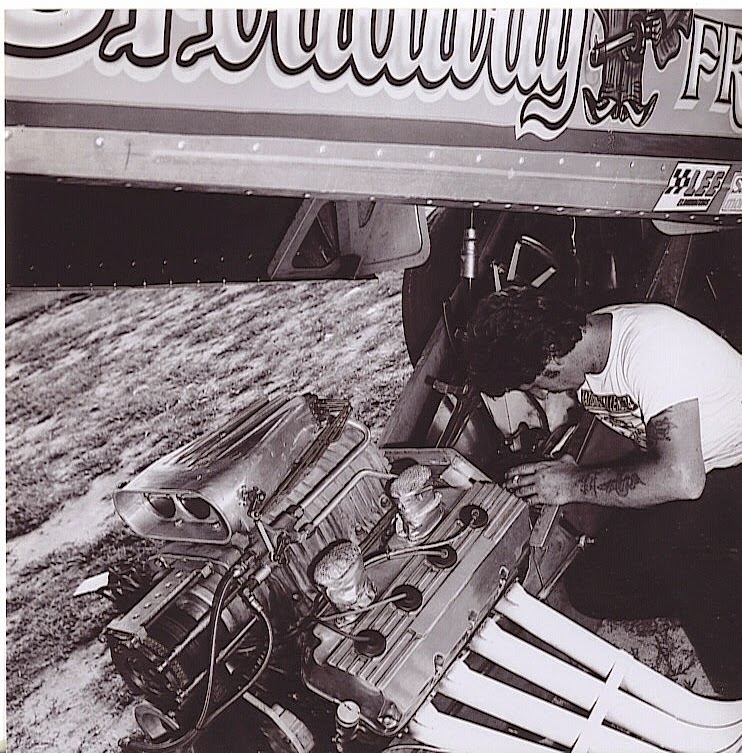 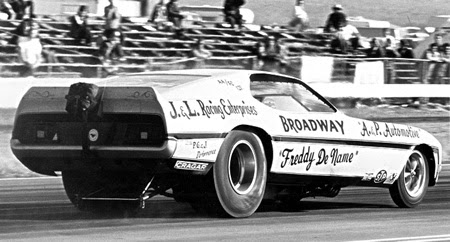