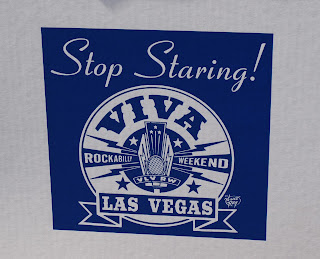 It's tense here in the bunker. Deadlines are bearing down with the weight of damnation. Coverage of my recent assignment to cover the Viva Las Vegas Rockabilly Weekender is due, along with the latest book for Cartech Inc. Perfect timing for a computer crash, which played out in spectacular fashion, scattering photos and documents to the cosmos like connecting rods from an overdosed nitro Hemi with a shorted magneto. My computer guy was impressed. I've spent the last seven days in triage mode, scrambling to replace the dead and patch up the wounded, while this poor blog suffers heinous  neglect. So here ya go. Fresh meat.

Las Vegas is already plenty surreal without 50,000 foreign  invaders (that's the number I heard) struggling to  place drink orders with surly/cynic bartenders who trip over their own English, let alone Swahili, Greek, Mandarin Chinese or the dozens of other unidentifiable tongues we failed to decipher at the event. The result was, at turns, festive, confounding,  joyous, even terrifying, but always touching - these people had journey'd from every crook and nanny of the globe to celebrate Americana with genuine American rock and roll musicians and hot rodders. The admiration was mutual, if often misunderstood, but we all just went with it.

I flew in a day early and checked into the Palms Hotel. The joint was crawling with vacationing twenty-somethings from Iowa or Ohio or somewhere, affecting expensive looks modeled after their interpretations of Entertainment Tonight red carpet highlights: Neon teeth, monster spike heels, just-barely-there minidresses and the latest styles from Super Cuts were mashed up and paraded through the casino like living advertisements for what must be Earth's last Playboy Club, hiding behind rows of crossed-arm security goons. Really. Either these people had been sold an empty package, or I'm completely out of touch. Shut up. The only shards of reality were down-and-outers jamming crumpled dollars into slot machines, while omnipresent overhead TV screens flashed updates on the last minute Powerball fever sweeping the nation. I ducked into an elevator and shot to the 17th floor to barricade myself in my room, cranked the SPEED channel to full volume to drown out the incessant blaring of canned Techno Beat musak, and fell into a deep sleep. 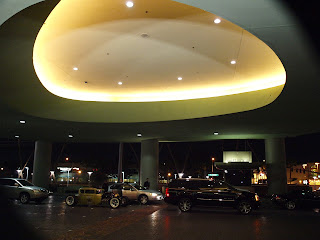 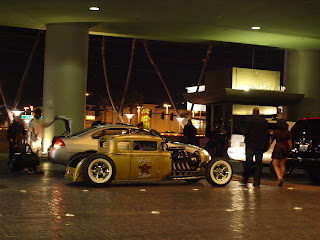 The Palms valet team was baffled when this unbaffled Model A rolled up, triggering dozens of car alarms. It sat for a long time while they attempted to start it. Six hours later, still no dice. Other than this amusement, I couldn't relate to my surroundings.

In the morning I rendezvoused with Hot Rod Magazine Publisher Jerry Pitt and worker bees Brandan Gillogly and Jesse Kiser at the VLV host Orleans Hotel. We set up shop in the car show parking lot and established another booth in one of the Orleans ballrooms. Jerry was there to sell subscriptions. Hot Rod Deluxe was sponsoring the event and I was its lone representative, since Editor Dave Wallace was stuck on a train in Canada with folk legend Ramblin' Jack Elliot (don't ask). I received a mountain of praise from readers for work that Wallace mostly did on the magazine. It was too weird. I packed up my camera and wandered into the crowd, at least half of which seemed to have bought into media-induced imagery of rock and rod stereotypes. But they were all having a blast, if blissfully ignorant of what they were really buying. Luckily, there were plenty of bona fide rod and custom hardcores there with enough cool cars to keep me engaged. I've already submitted my report to the magazine (Hey Hot Rod: Sorry about crashing your photo site!), so will share photos here that I'm confident they won't run. Online Viva coverage has already saturated bandwidth with the most popular cars, but there was plenty to go around. Check out Hot Rod Deluxe for the really killer stuff. Here's my leftovers... (Copyright 2012 SGE, GBR, SourceInterlink) 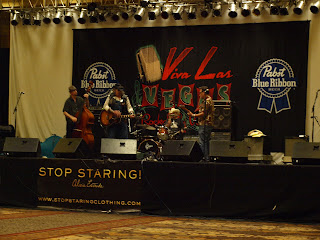 These guys (unknown to me) provided an appropriate background score during their sound check, while we set up our booth in this ballroom and I experimented with my camera's light settings. Obviously, the experiment was a failure, but we all enjoyed the tunes. 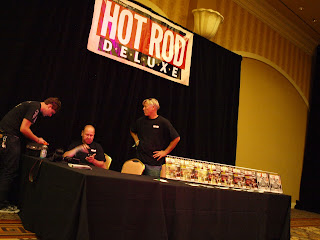 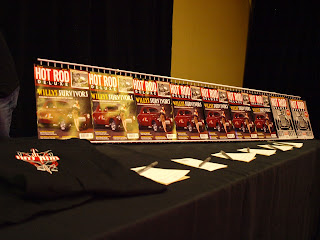 The latest (May) issue (featuring Les Brusatori's Willys) stared back at me all weekend. Weird to be on this side of it. People snatched 'em up as fast as we unloaded 'em. Many boxes worth. Cool. 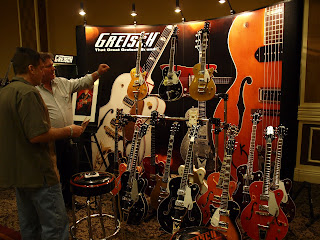 Gretsch Guitars was one of our co-sponsors. They also had multiple displays and even gave away a guitar. 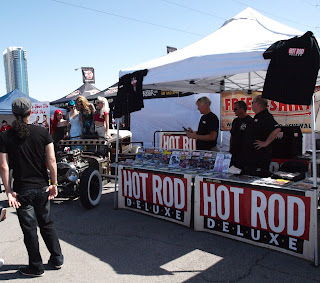 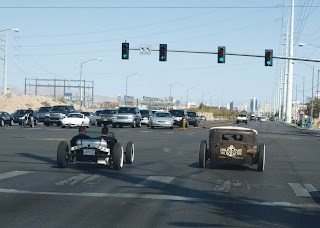 Brandan and Jesse had driven the Sailor Jerry Model A tudor from L.A. as part of a Hot Rod video thing (or maybe it was for Roadkill?). The roadster guys are from Mackey's Hot Rods, who built the A-bone. We were supposedly going to lunch, but spent most of the day shooting cars. Fine by me. 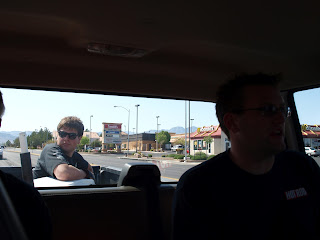 With Jerry wheeling the Hot Rod dually, Brandan and I took window shots while Jesse risked it all in the bed (mostly standing) . We may have broken a few laws maneuvering through Vegas traffic caravan-style, but it was all in the name of photo journalism. 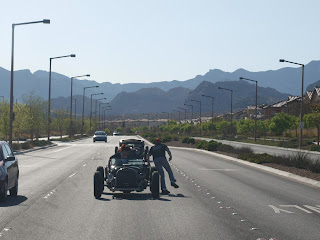 I believe Chinese Fire Drills are legal in Nevada, as long as you're not downtown and the day of the week begins with a 'T'. 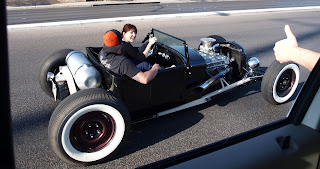 All I can tell you is that the Mackeys overtook us at high velocity. We're only doing about 50 here, but are less than a yard from the crosswalk at a red light. Excellent brake test! 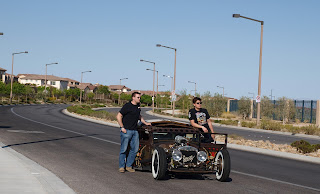 Brandan and Jesse striking a studly pose. We were rolling right along, when the road abruptly ended right here. So we headed back into town for tattoos (hey, we wanted to blend). 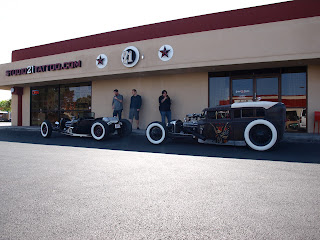 Genuine Las Vegas tattoo artists, loitering around the Sailor Jerry car and the Mackeymobile. We were inside, getting matching flying unicorns on our shoulders, in observance of a day of male bonding. Not really. But I think Mackey got a Sailor Jerry logo on his leg. 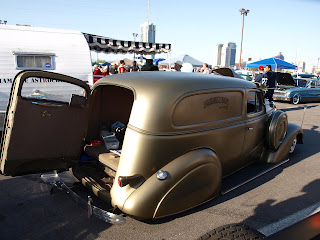 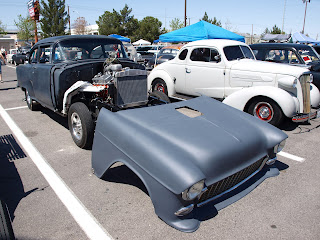 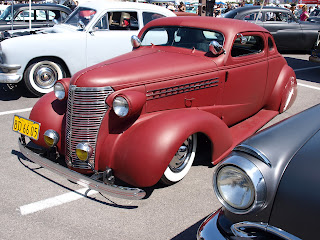 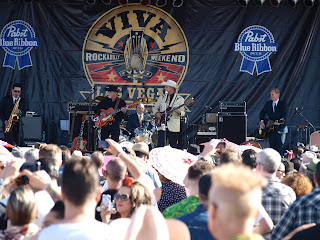 That's right - it's Duane Eddy on stage at the car show, with Deke Dickerson on bass. 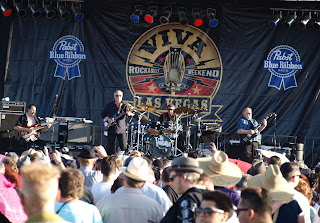 Followed by The Ventures. 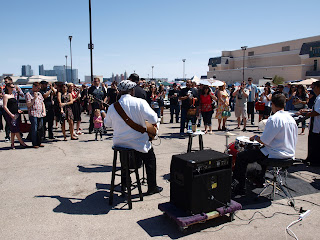 Even with 60-some bands at this event, picking our favorite was easy. This uninvited act was set up at the edge of the property, employing a gas generator to make the guerrilla performance possible. If you're not hip to them, their name will be revealed in Hot Rod Deluxe soon. This was lauded as their last hurrah, but... 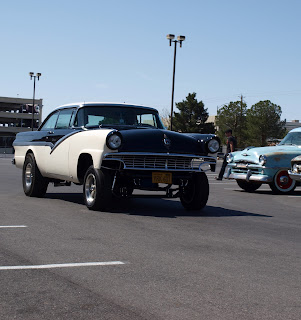 What? Oh yeah, the car show. 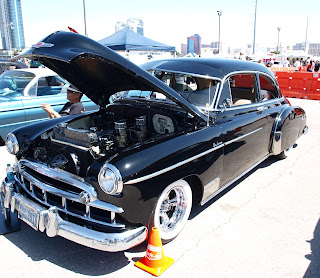 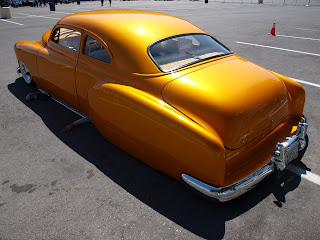 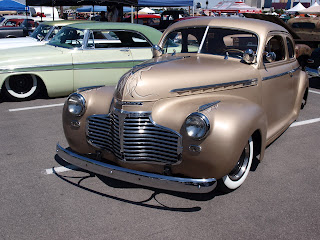 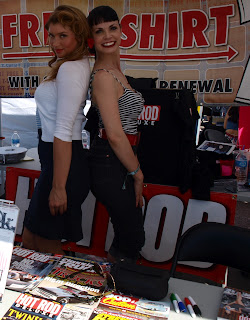 Business as usual at the Hot Rod Deluxe booth. 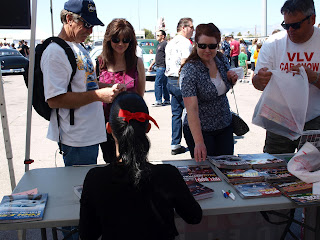 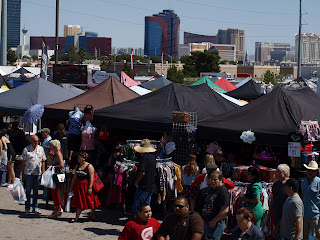 Of course, we weren't the only booth there. Without a wide angle lens, this tiny slice of the vendor area is all I could catch. Hopefully, you get the general idea. 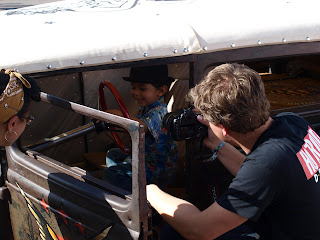 Jesse took about a million shots for Hot Rod. His primary assignment was to record crowd reaction to the Sailor Jerry car... 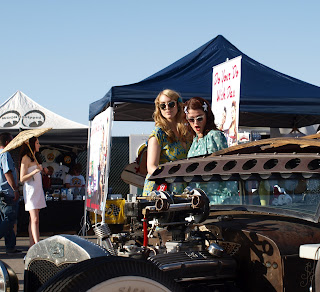 Everyone seemed to find it interesting.

After the event, I had an extra day to kill before flying back home. I spent it in my room, with the SPEED channel cranked to full volume to drown out the still incessant Techno Beat musak that pervaded every square inch of the Palms Hotel. For what it's worth, the tourists from Iowa (or was it Indiana?) seemed to thrive on the stuff.


Posted by Scotty Gosson at 4:24 PM No comments: