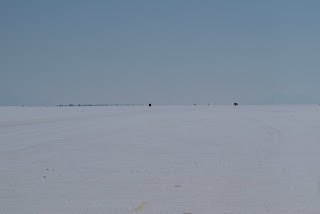 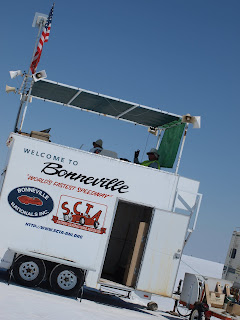 Every Bonneville pilgrimage is epic by nature. At least that's been my experience over the last 30-some years. 2011 was no different - yet another leap of faith, with thumb out, empty wallet and no expectations.
In the last blog entry ("Gone, gone, gone..."), I alluded to the lack of words to convey the salt experience. That didn't stop me from trying in 1996, when I wrote "Here's Salt in your Eye" for my hot rod album:
Out on the wide open road
Out where the line chasers go
So fast
So fast...
Out on safari for speed
Out there fulfilling a need
So bad
So bad...
Step right up to a dream
Take a chance and believe
And enjoy the ride
And if your hopes are dashed
And if you're broken or crashed
Well here's salt in your eye...
They've been broken before
It's a price they pay over and over and over
So cold
So cold...
Out looking toward what they want
Sometimes they find what they need
So bad
It's so good...
Copyright Squid Valley Music 1996
Those lyrics probably only resonate with those who've lived them. Oh well, I tried...
The 2011 edition began wth my brother Wayne and I loading up my old '36 Ford truck cab (narrowed 20" and chopped 8") into the trailer behind his HHR delivery. I had an afternoon book signing at the Medford Barnes & Noble, then we blew town, targeting Winnemucca, Nevada. 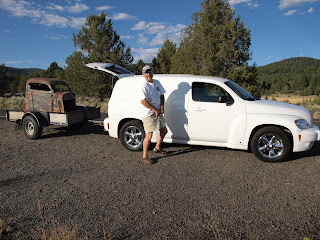 Exhausted from unsuccessfully dodging dozens of jackrabbits, coyotes and owls for nine hours, we made camp at  the Scott Motel -the traditional stop in Winnetown and our oasis in the desert night. 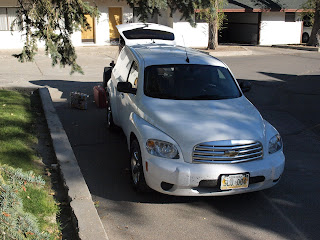 Six more hours of bench racing delivered us to Wendover and finally, the salt. It's always such a sweet warmfuzzie to reconnect with old friends and make new ones. First stop was checking in at Sid and Eric Johnson's pit, where I'd be crewing for the week on their Berkeley roadster. Much more on these guys in the story of my 2009 adventure, "Surfing the Asphalt Playground". 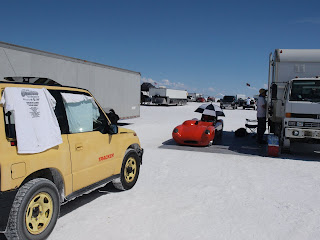 My mission was to photograph and interview racers from abroad for my book on the subject, in between crewing for the Johnsons and yukking it up with old cronies. Mission accomplished, on every count.
Some highlights:
It turned out that the big salt news this year was the Italian and French teams I was covering. They both exceeded their expectations - high and low, respectively. I got great stories from these guys, along with Norwegians, Kiwis and a certain Brit from Switzerland, driving for a Scottish team.
Wayne and I attended the premier of The Boys of Bonneville film, with a couple thousand friends. Great documentary on Ab Jenkins, who brought land speed racing to Bonneville from Daytona Beach and the dry lakes. We were amazed to discover how much else he did in such a frantic short lifetime.
Keith and Tanya Turk were pitted near us, with the Hot Rod Magazine Special Camaro. Frieburger, Chad Reynolds and the usual suspects were in attendance. They blew up the big block Chevy early in the week, but called a Hail Mary and ran it in the 2-cylinder class, qualifying for a record at 32 MPH. While preparing for the back-up run, a dedicated V-2 racer reality slapped them with a 120 MPH run. Only at Bonneville...
George Poteet and Ron Main took the Hot Rod Magazine Top Speed award with a 426 MPH run in their streamliner.
Funny Car ace Ron Capps drove the Speed by Spectre 'liner over 300, contracting a nasty case of Salt Fever in the process.
There were way too many more stories to list here. Bottom line: My jaw still aches from laughing.
I can't post the book photos here, but will share some random snapshot out-takes for your amusement: 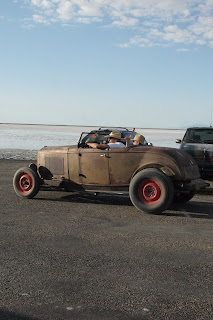 Last thing we saw at Road's End, before hitting the salt 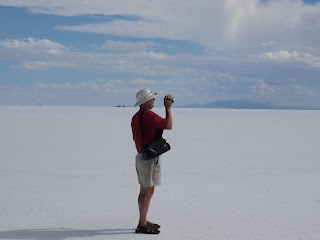 Wayne surveys the salt for the first time in a year. Still tastes the same... 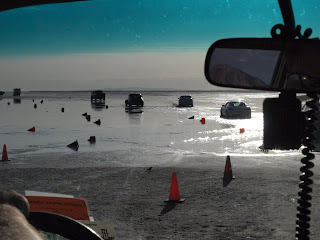 Going to work Monday morning, after Sunday night's thunderstorm. The course was fine. 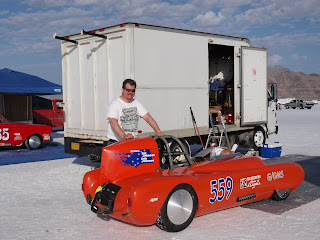 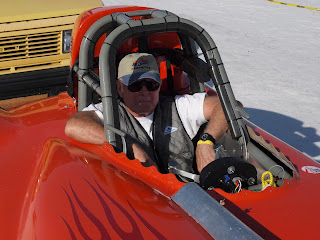 Sid Johnson (AKA Hot Legs). If you think this is a tight squeeze, you should see Erik shoe-horned into this cockpit. Seven days later, we finally got through tech (long story)... 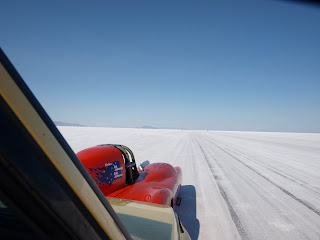 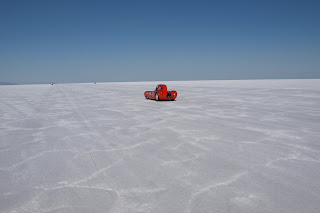 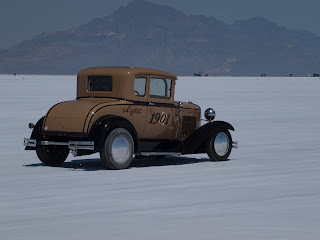 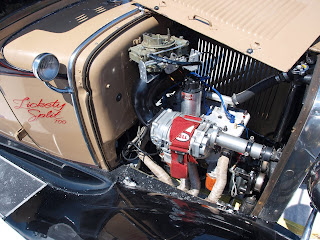 I hung with this blown banger A in the staging lanes (they had a nice fan and it was scorching hot). Didn't realize the driver I'd been BSing with was Tanya Harding until later. They were shooting for 100 MPH. 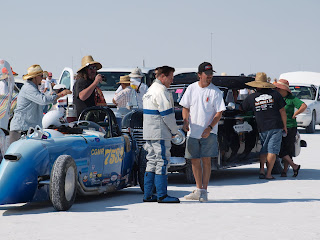 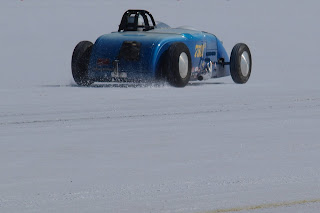 Gene Winfield is still burning salt and building world class customs. He must be 112 by now. He grabbed me in a pinch and put me to work in his pit. Same thing happened to every other journalist type I spoke with. Small price to pay for a moment with royalty. He spun out at 205 MPH, but was back in action and still running when we left. 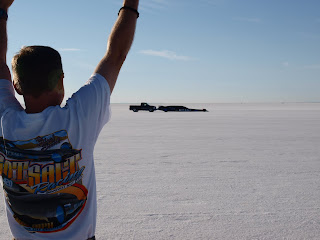 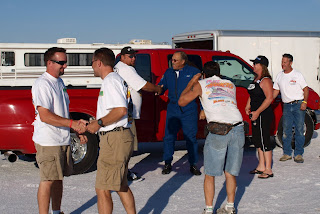 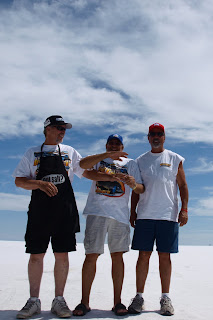 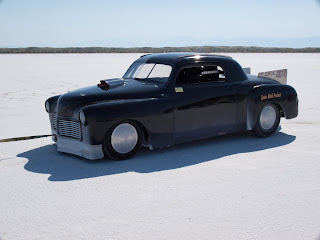 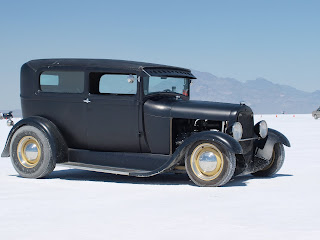 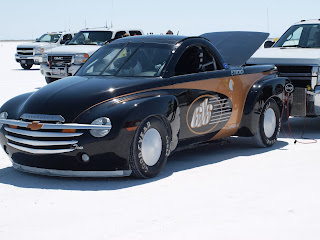 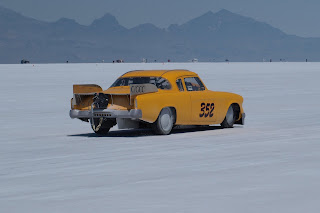 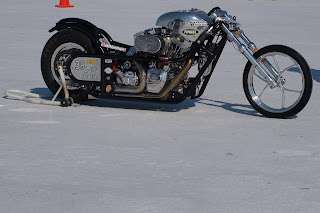 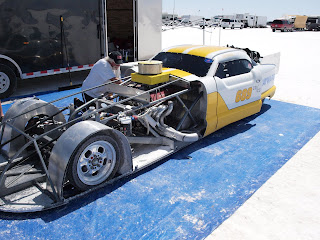 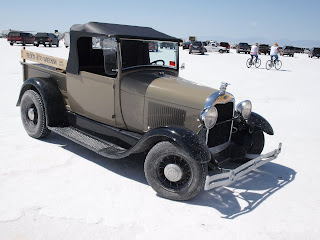 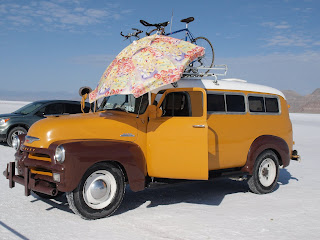 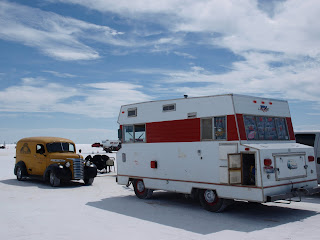 Enough! But super extra special thanks to the Johnsons, who fed, sheltered and chauffered me all week! These guys are genuine hot rod heroes who also taught me what real friendship looks like.
Posted by Scotty Gosson at 8:59 PM No comments: