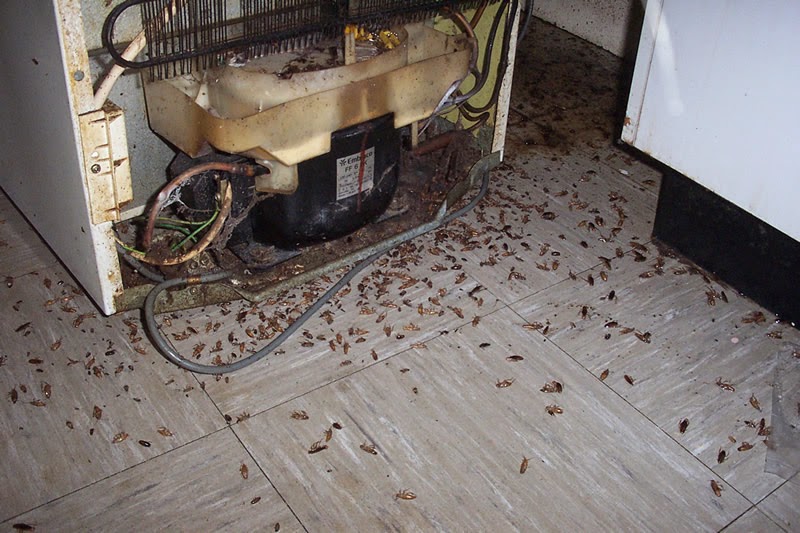 Flip the light switch and watch the cockroaches run. That's how it goes in the SGE kitchen, anyway. Why the human fascination with racing without a defined finish line? Aren't we wired more linearly than that? Where the hell's the trophy queen?

Many of us share the capacity to recall very early childhood memories. I can close my eyes and see my mom teaching me how to speak English (or what the English call American). What a revelation that was! Suddenly, I was communicating with my fellow humans - an interactive member of the pack. Neither my mom nor myself had any comprehension of what a monster we were creating. But it got worse. Our town had no Kindergarten or other pre-school, so Ma taught me to read and write before I bused off to Elementary school. That's where I learned to write stories (manifested in song form for the first four decades of my life).

Today, I actually get paid to write people's stories. Amazing. And the satisfaction of shining a light on someone's accomplishments is a rush akin to learning to speak. The work is so fulfilling that I even enjoy doing it for free on this blog (which was originally intended to chase cockroaches away, but I quickly tired of that negative approach). The monetary payment I receive from publishers is but a pittance, so I must promote the work for the sake of more Bachelor Chow. Promotion is, by far, my weakest skill set, so I'm practicing on the SGE Guinea pigs today. Thus, this spammy post, guaranteed to attract enough cockroaches to keep us all entertained into next week. 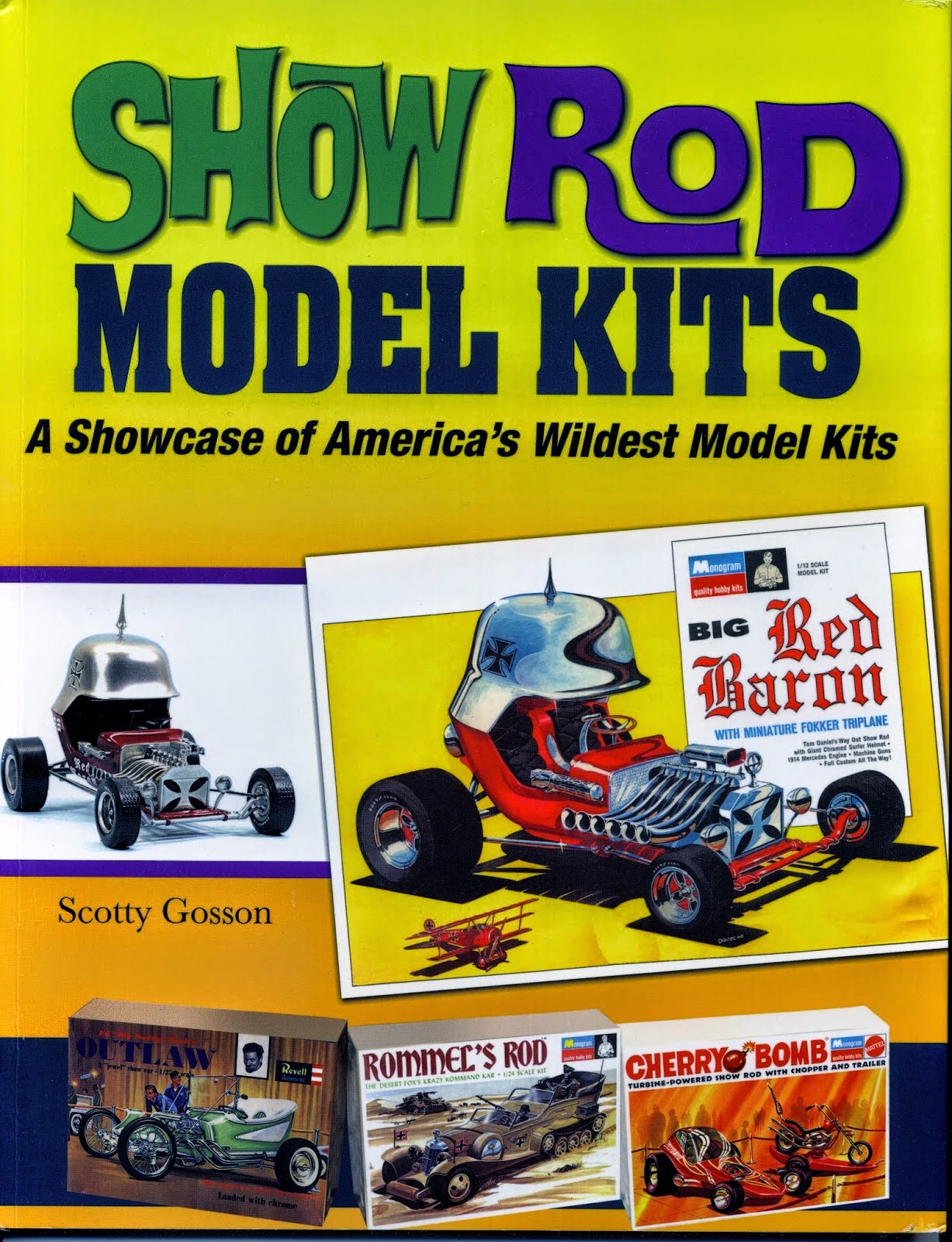 The latest, from CarTech Inc. Get yours at http://www.amazon.com/Show-Rod-Model-Kits-Showcase/dp/1613251564, or directly from www.cartechbooks.com. The modeling community has created an impressive buzz around this release. Thanks guys! 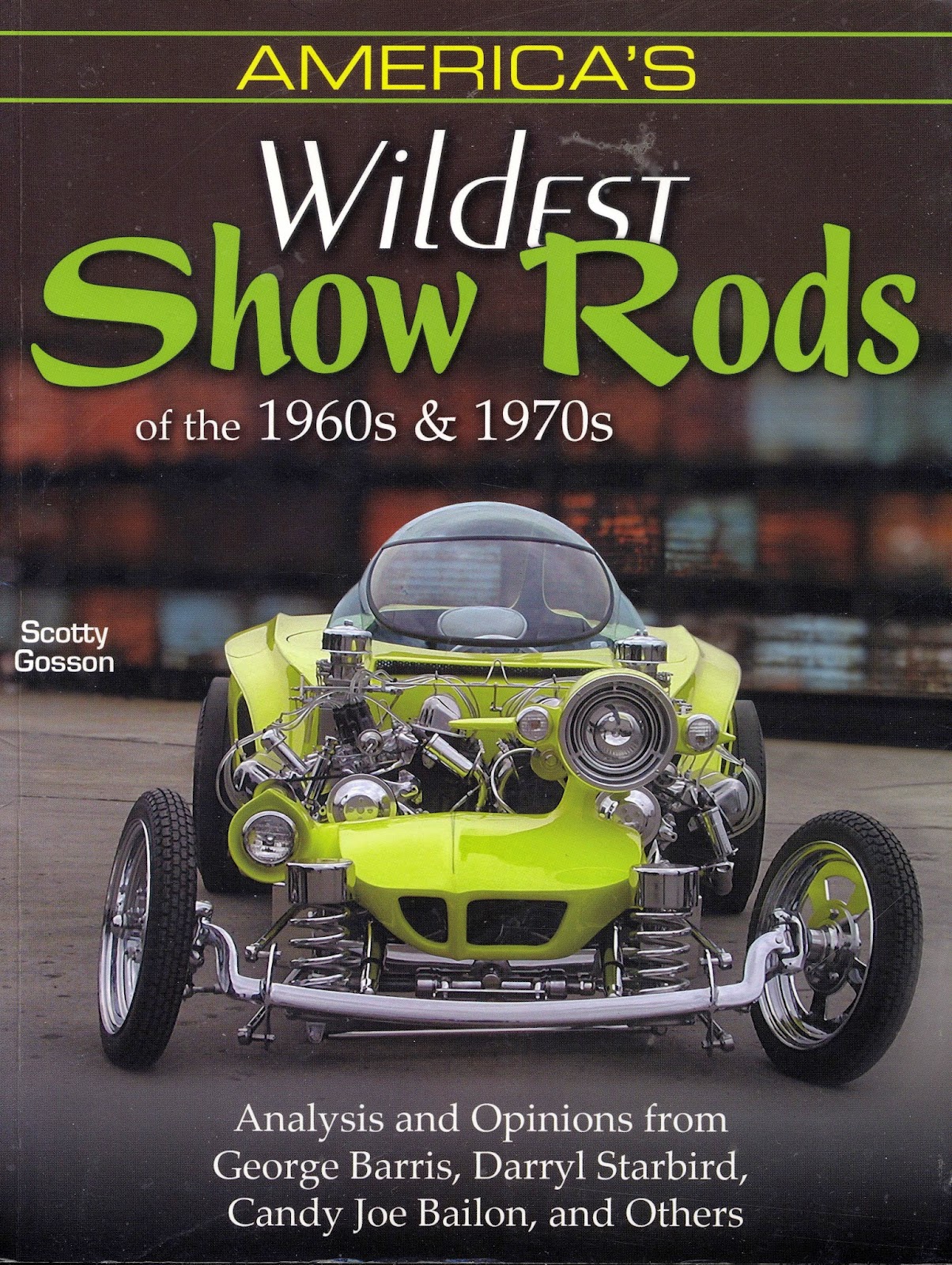 The current model book was inspired by the reaction to a single chapter on scale models of the featured cars in this book. Get hip at: http://www.amazon.com/Americas-Wildest-Show-1960s-1970s/dp/1613250363, or  www.cartechbooks.com. Lots of fun stuff jammed in these pages. 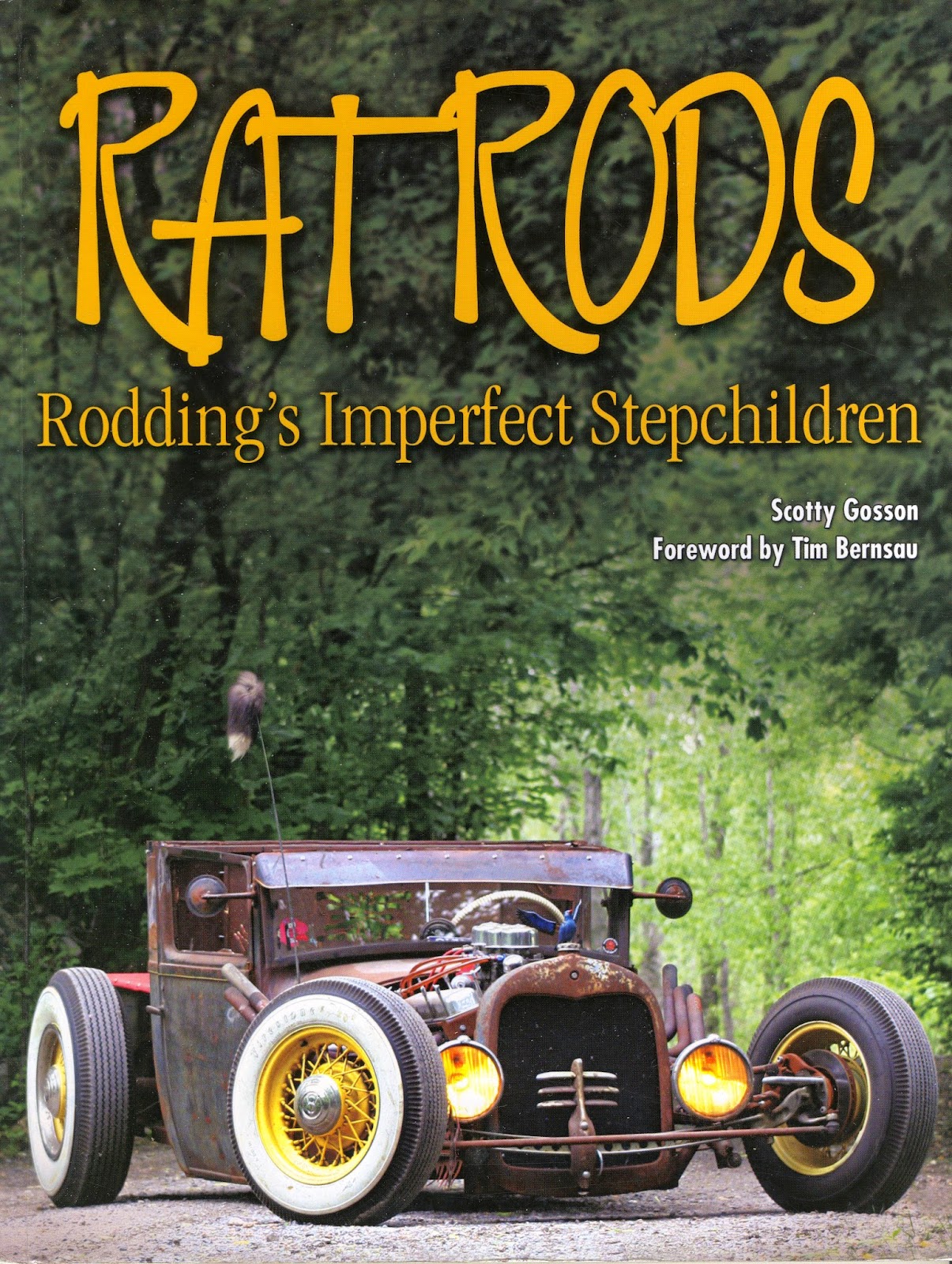 Oh, don't act so shocked. You know I'm a lifelong beater guy. These are mostly just extreme beaters. And many are too well done ("Well dressed rats" to quote Tim Bernsau's Foreword) to even be considered beaters! See for yourself at: http://www.amazon.com/Rat-Rods-Roddings-Imperfect-Stepchildren/dp/1934709212, or at http://www.cartechbooks.com/rat-rods-rodding-s-imperfect-stepchildren.html 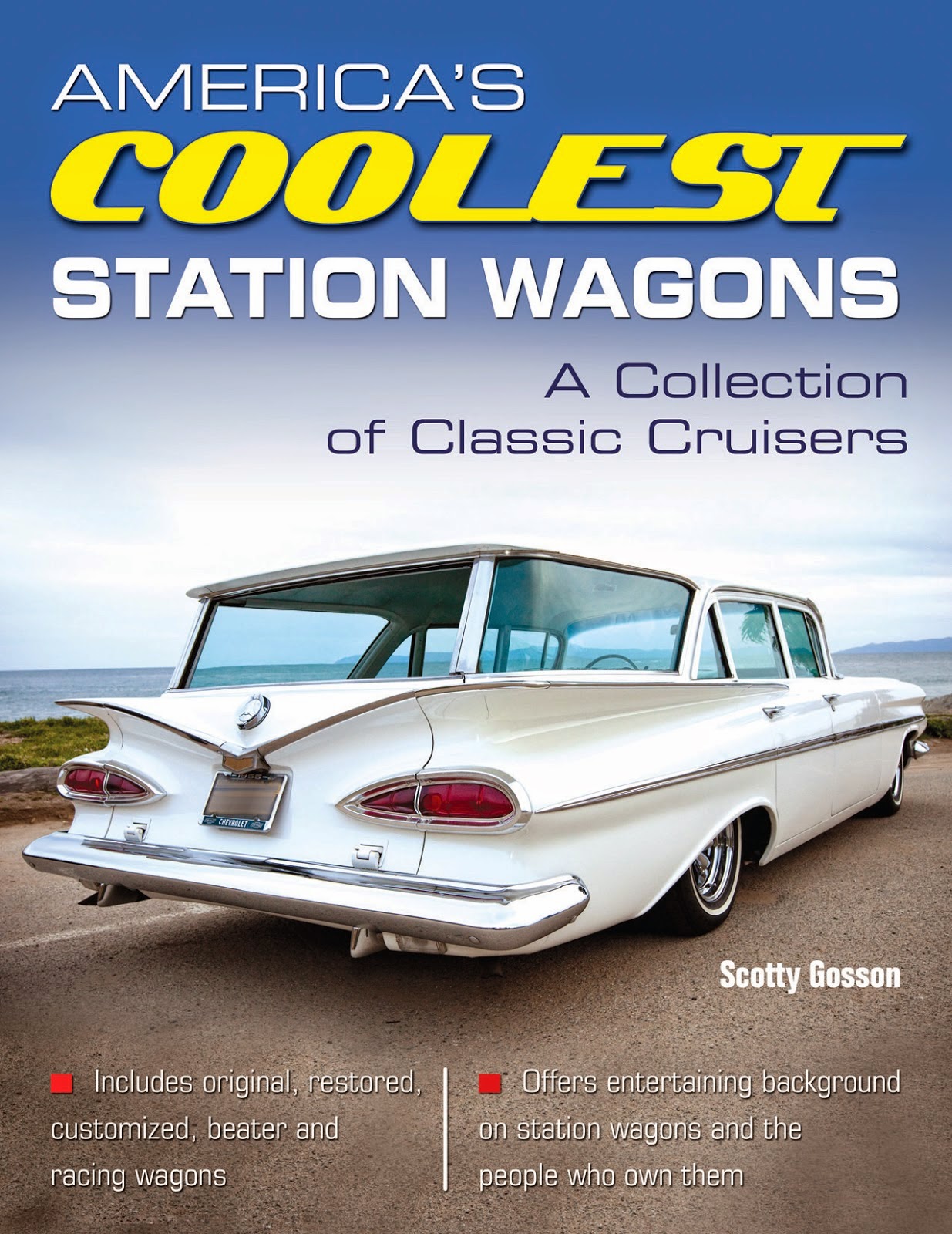 My first assignment for CarTech Inc. was this tribute to my beloved station wagons. It sold out and no second printing is planned, so happy hunting to you on Amazon.com, eBay, and wherever else obscure out-of-print books are sold. 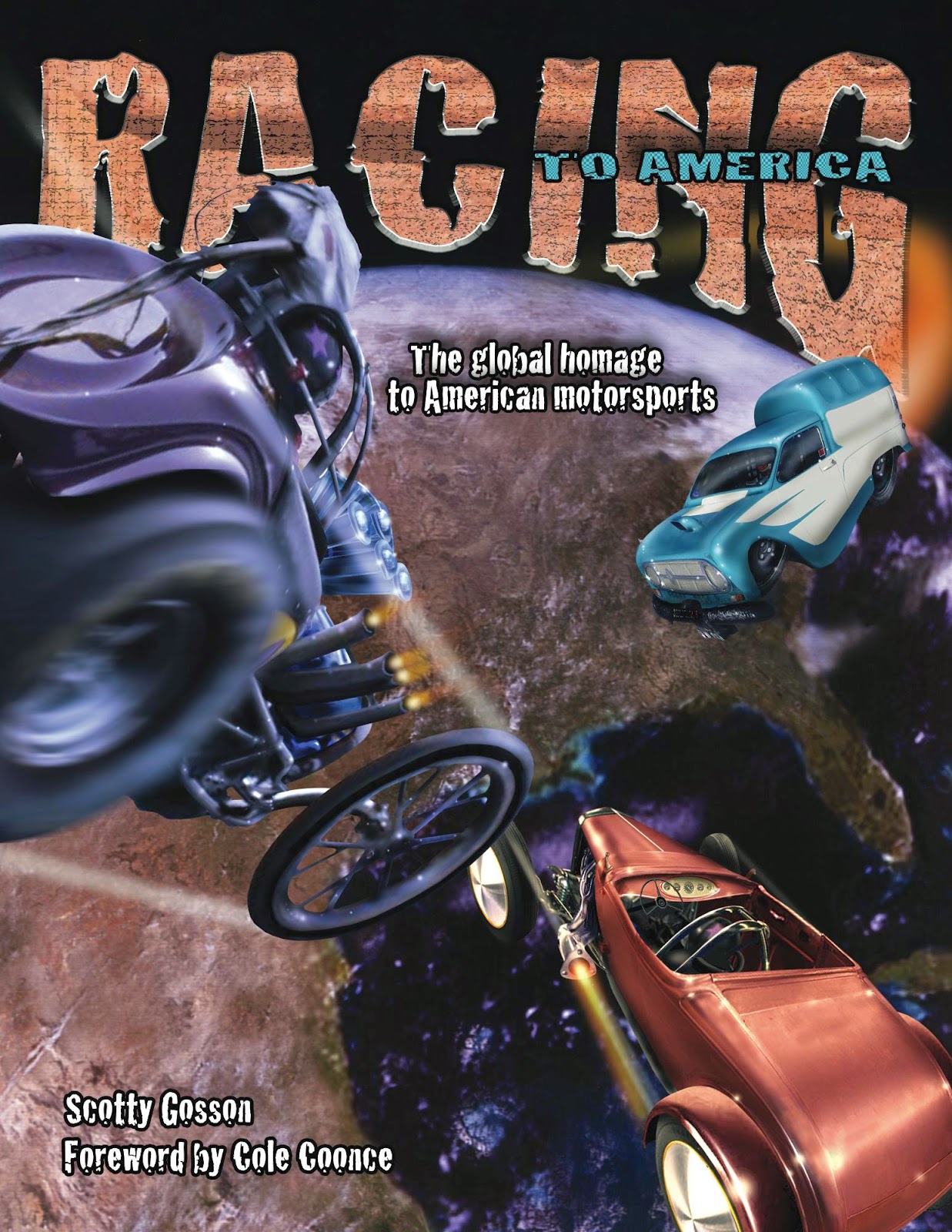 I wrote this one for free, and paid dearly for the privilege. The freshman release from the Gosson Bros. Racing Library has yet to pay for itself (despite exploiting Cole Coonce right on the cover). Regardless, more GBRL books are idling in the staging lanes. Invest in a modern collectible at: http://www.amazon.com/Racing-America-Global-American-Motorsport/dp/1490539778, or mainline it from https://www.createspace.com/4338903 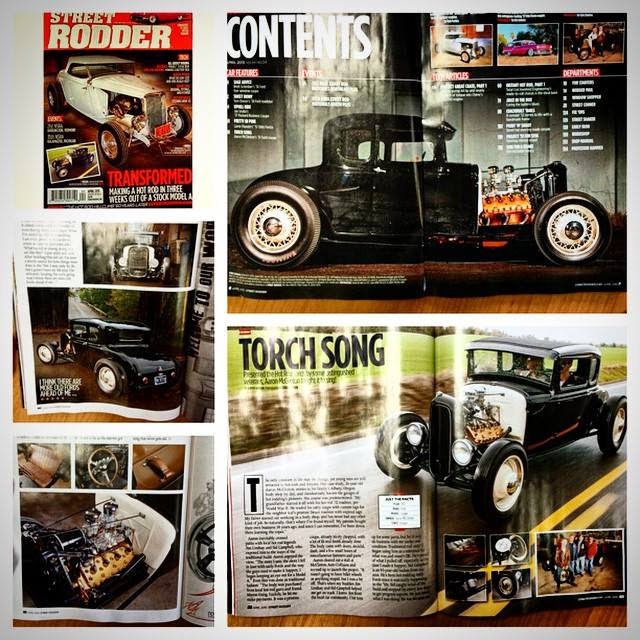 Previously on SGE, we exposed Chris Shelton's photoshoot of Aaron McClinton's Model A. See the finished product in the April 2015 issue of Street Rodder magazine. Now playing at your local news stand. 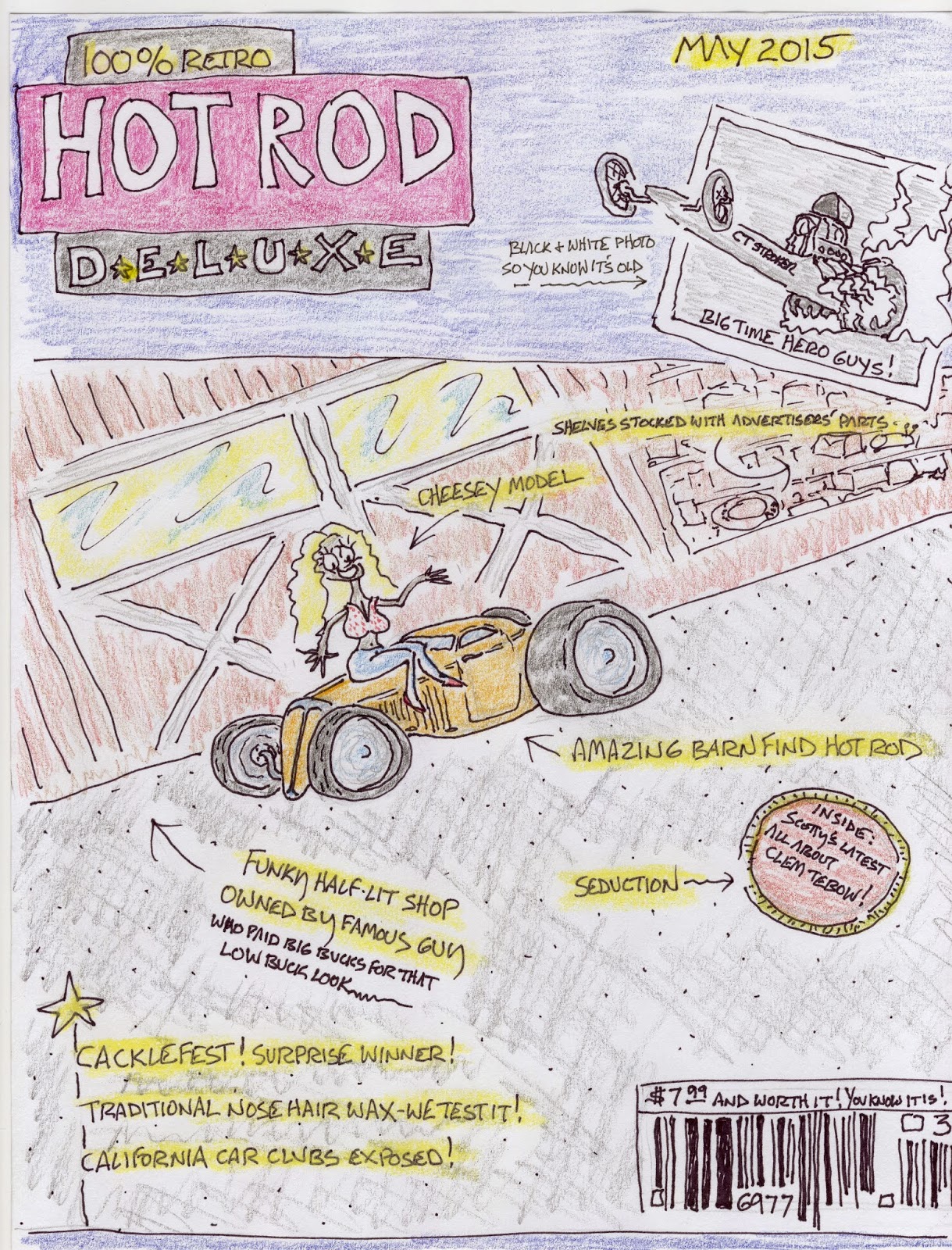 Look for a feature piece on hot rod pioneer Clem Tebow (of C-T Strokers fame) in the May issue of Hot Rod Deluxe magazine. It should be on your local magazine rack in mid-March. Photo not available. (Artist rendering courtesy of Floyd Lippencotte Jr.) 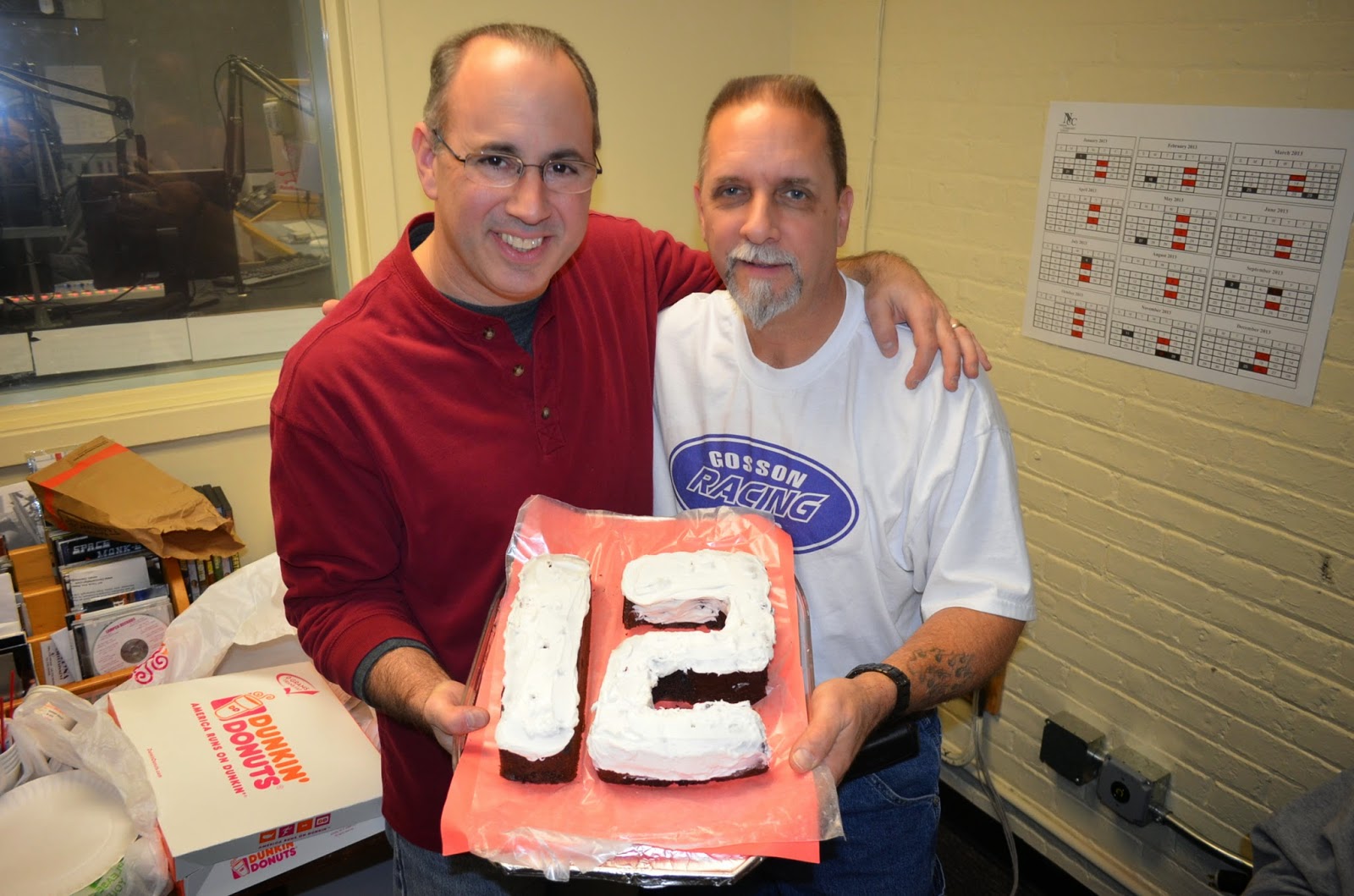 Still can't get enough Scotty spam? I'll be on Motormouth Radio this Thursday (at noon Eastern time), plugging away. Tune your dial to www.motormouthradio.com. There's even a video feed now! And hosts Chris and Ray baked a cake for my 12th appearance on the show. Thanks guys! I'm hungry. And nice shirt, Ray! (Photo courtesy of Motormouth Ray) 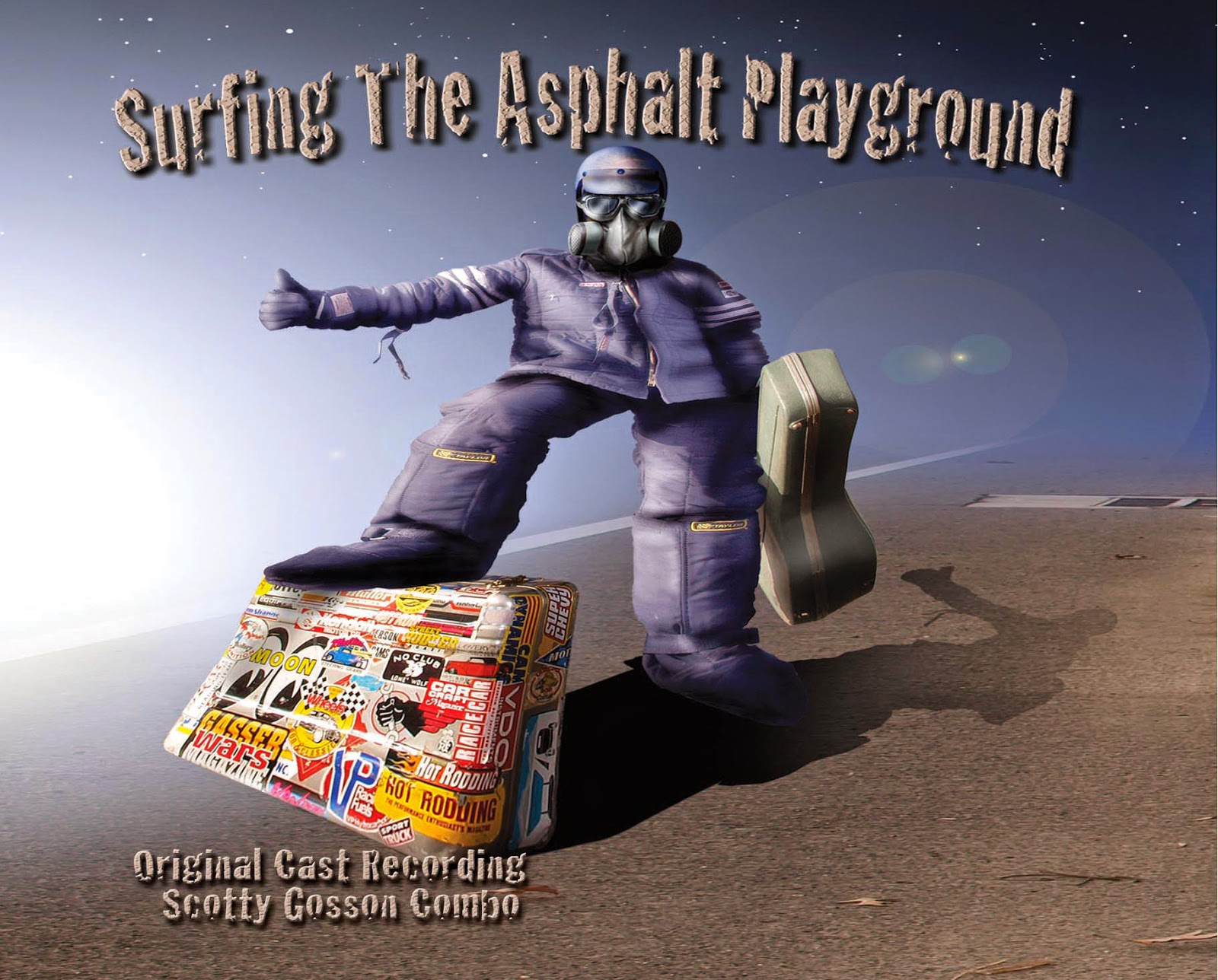 Remember when Gosson Bros. Racing Library released the soundtrack to my Surfing the Asphalt Playground book last year? If not, refresh your hindsight at: https://www.createspace.com/Customer/EStore.do?id=2233253 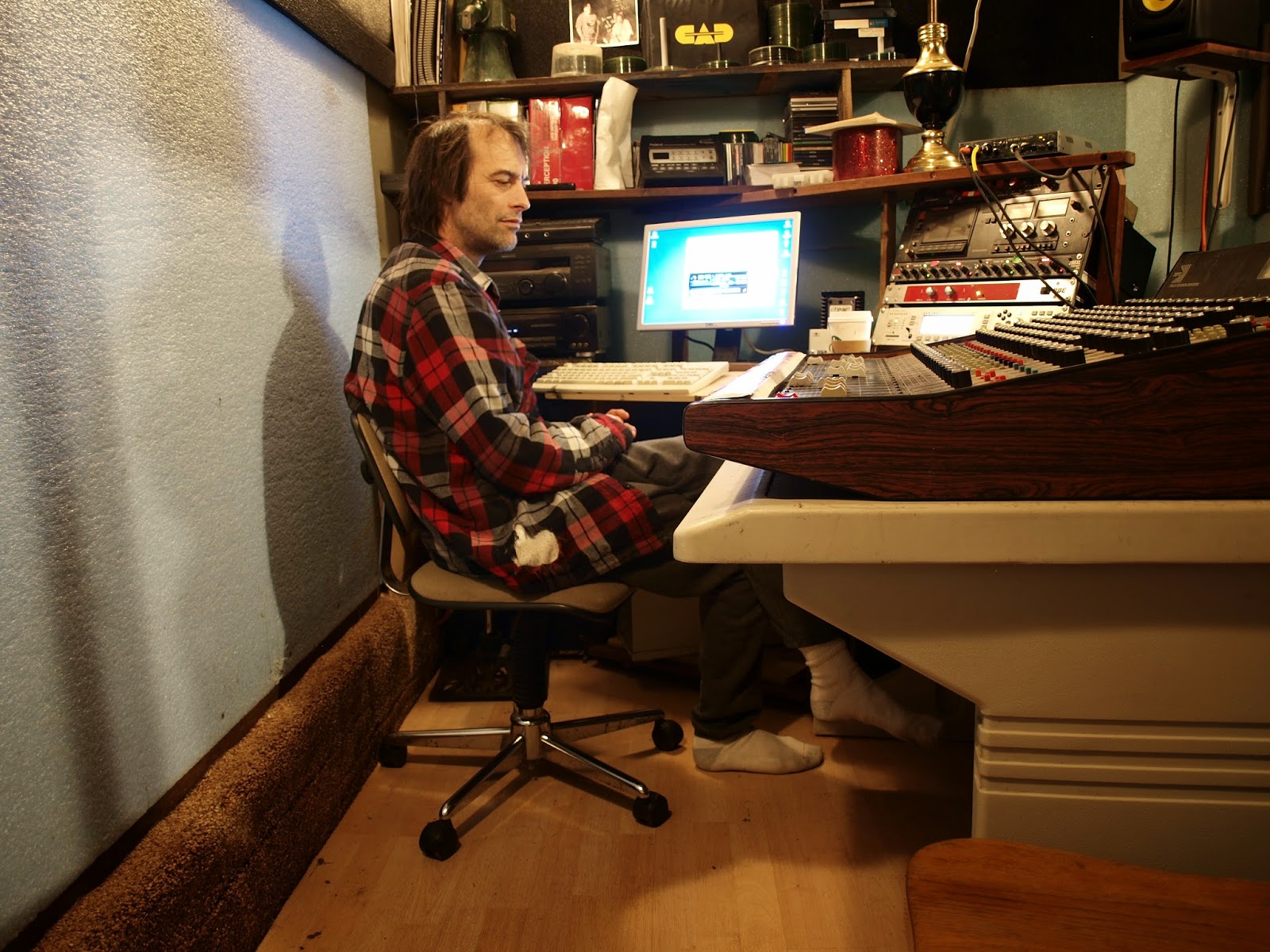 February is National Surf Month, so producer/drummer Rob James and I are cranking out a new Scotty Gosson Combo album in Rob's garage. That's Rob at the board, focusing on a playback listen, or dozing off. It's hard to tell. 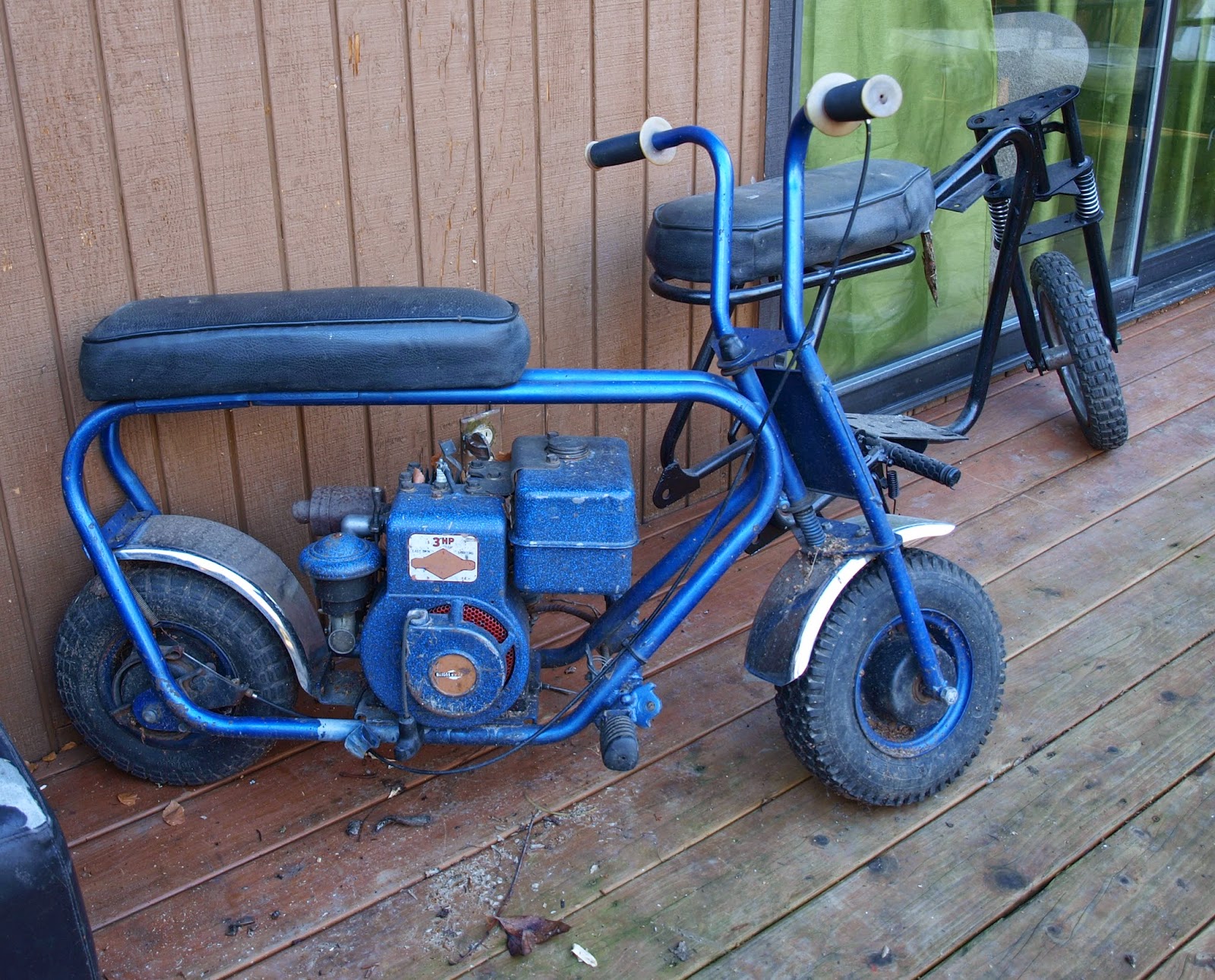 We even have mini bikes for break-time steam venting purposes. 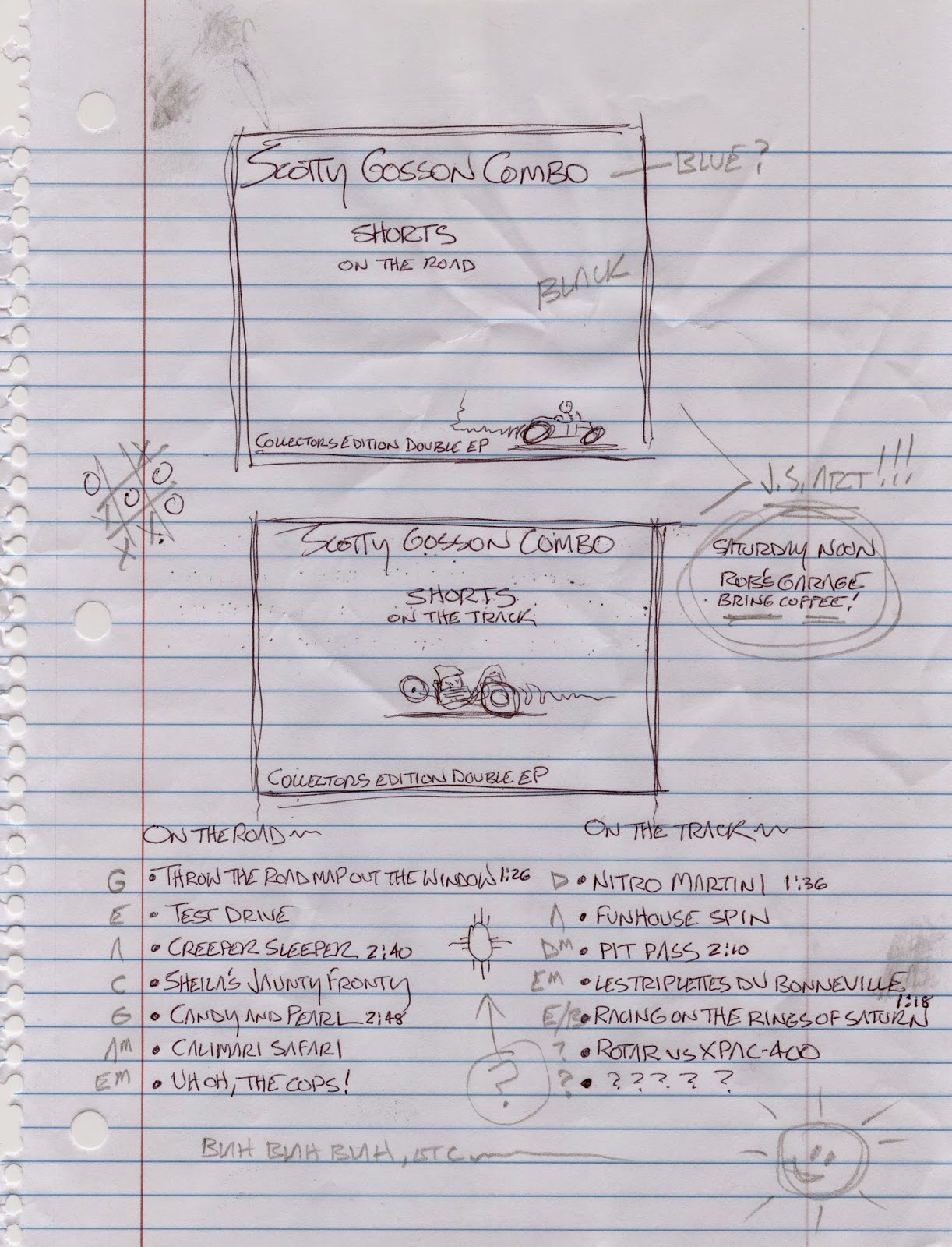 The secret blueprint for the new album. With any luck, it might come somewhere kinda close to this plan, maybe. There's no controlling the creative process - just gotta let it happen. (Scotty shots)

Okay, that oughta be enough promotion to keep the publishers happy for a few more months. Sorry, everyone. 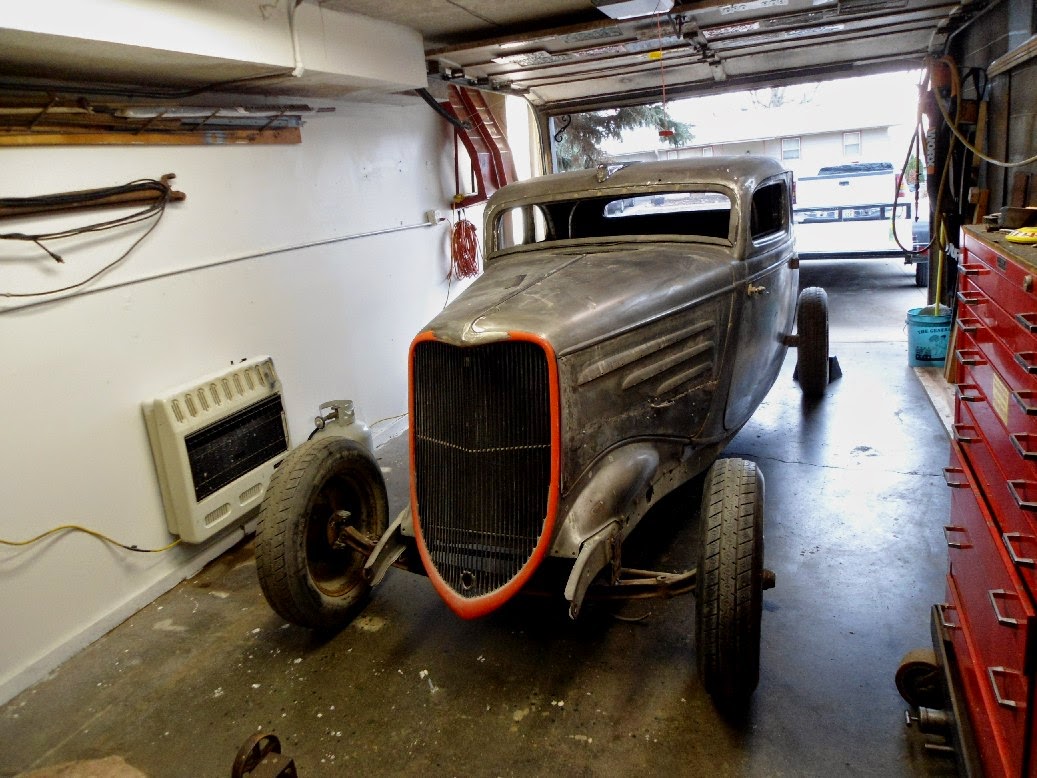 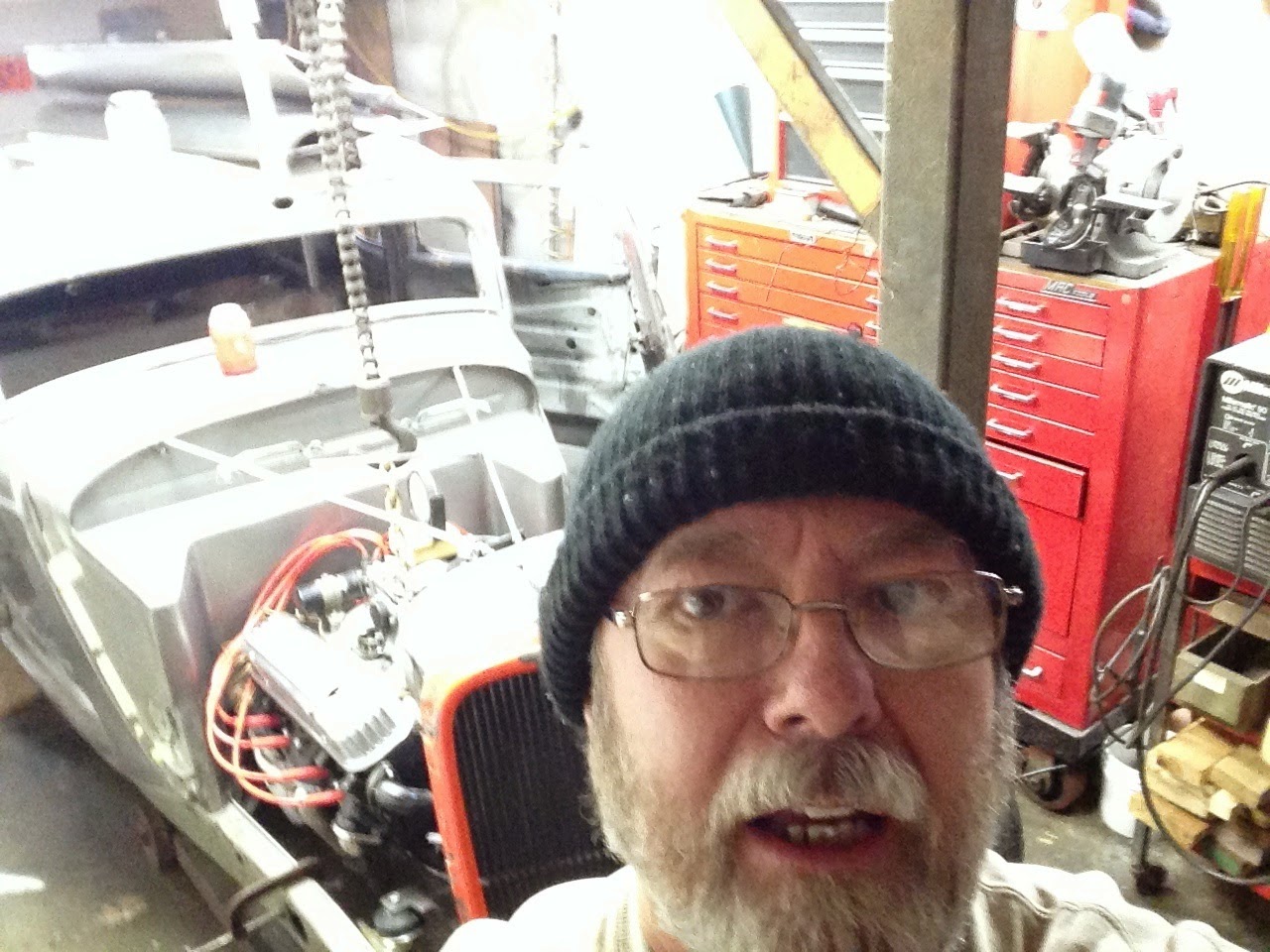 Rocky and the 5-window coupe aren't above a little Selfie promotion either. They have good reason to celebrate. 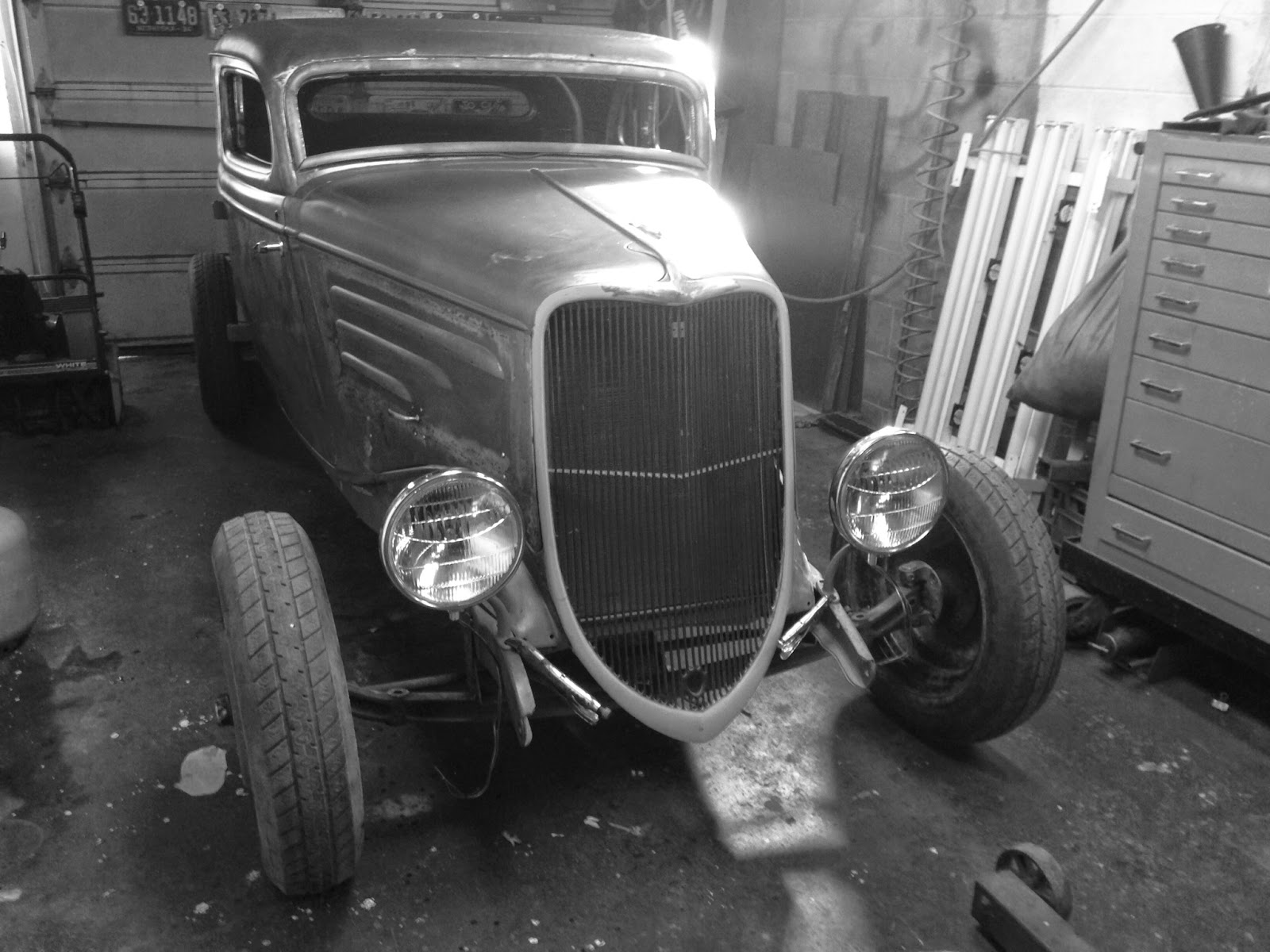 What the fuss is all about. Tin basher Jimmy Vaag outdid himself on the body (previously a dirt track car). Suspension and drivetrain are just mock-ups, but that is changing quickly now. 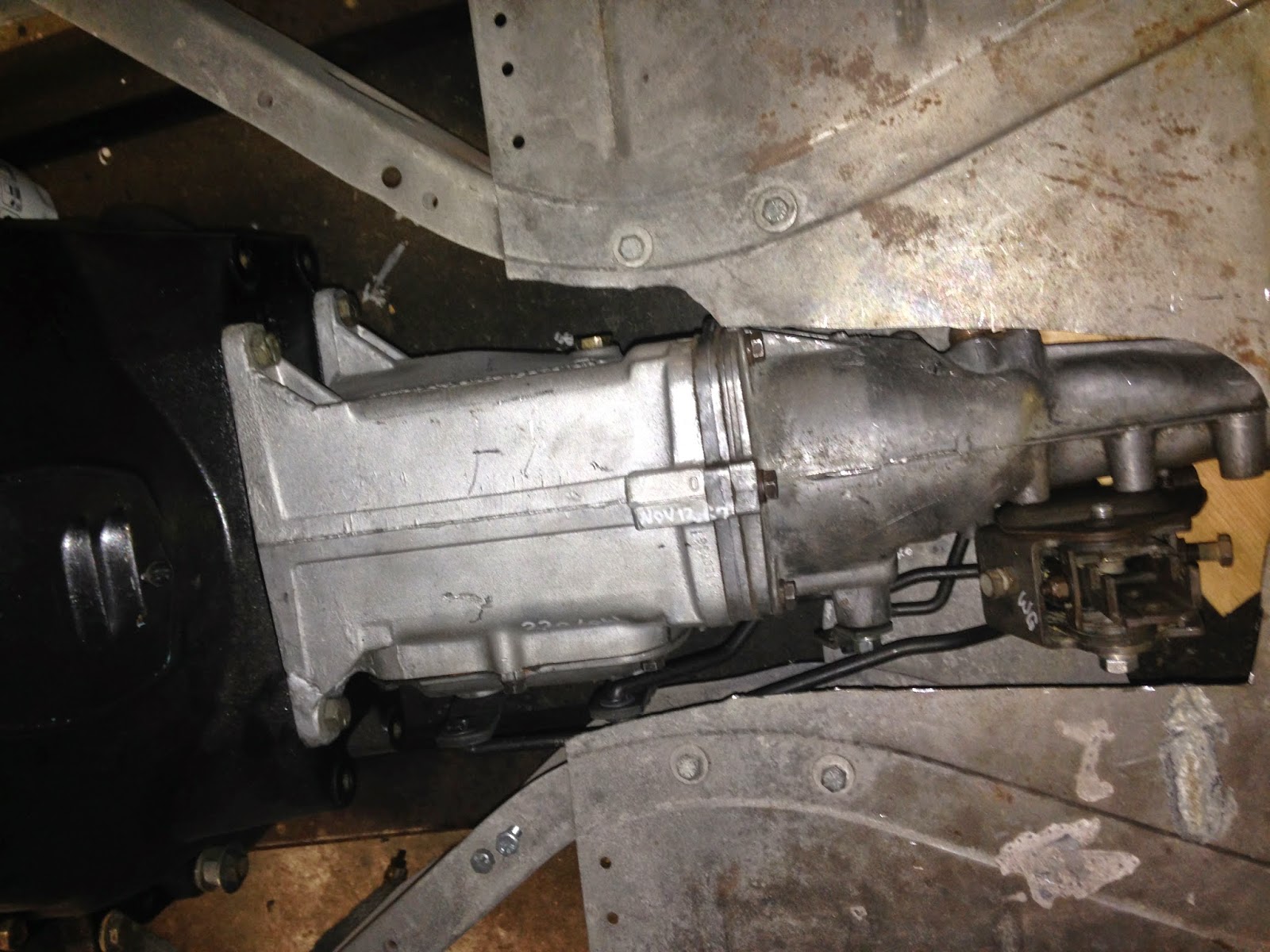 That's right, traditionalists, it has a 5-speed. You'll just have to deal with that. 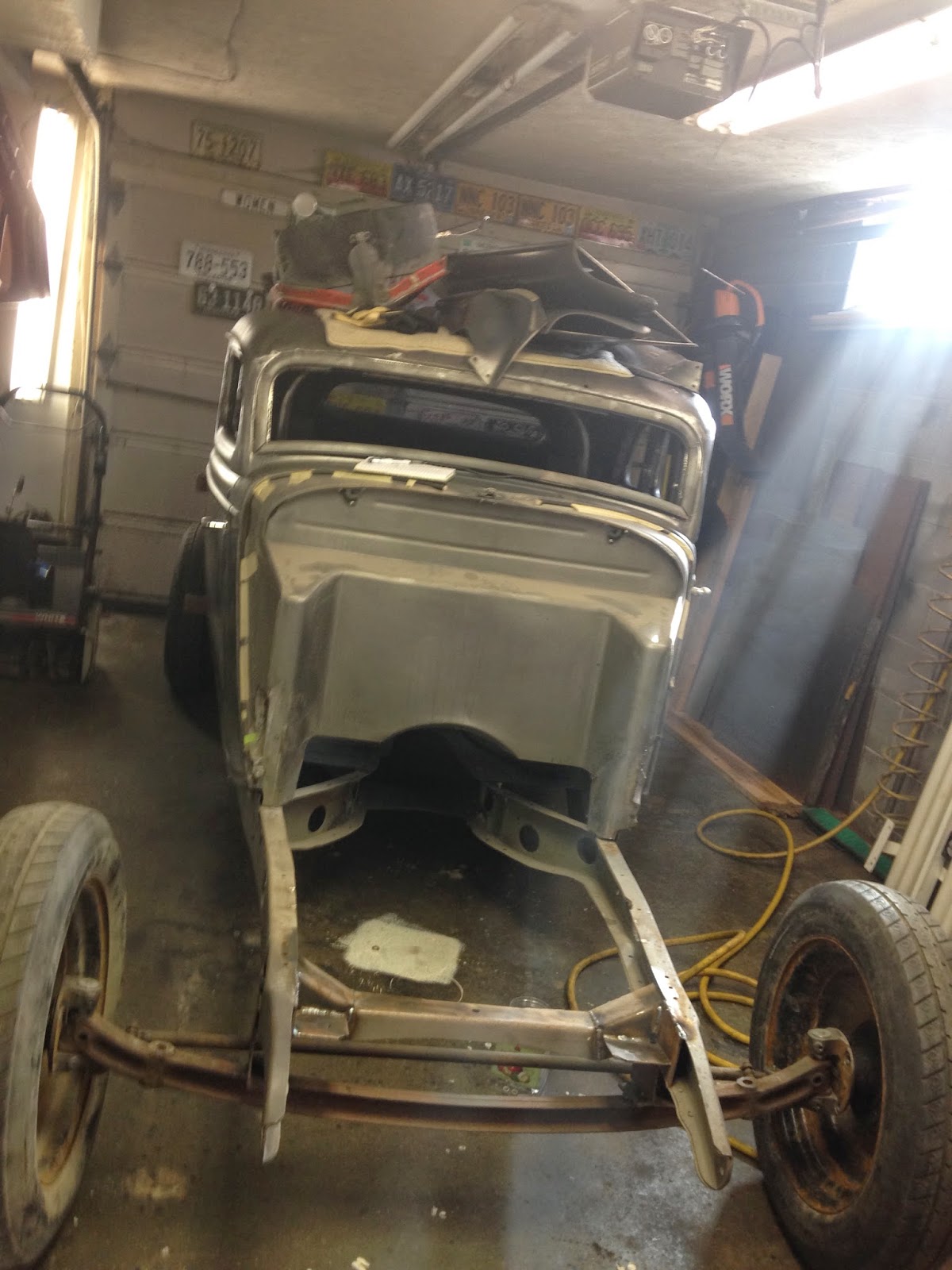 Rocky and Jimmy fabbed a new firewall while they were twisting the tin... ... which Rocky has now covered up with 370 inches of Poncho power ( a stroked and poked '57 347). This single 4-barrel version will suffice for break-in and initial testing purposes, then Rocky will install the good stuff.

Looking ahead, Rocky has been experimenting with color on the custom dash. Nothing wrong with a dash of color. (Photos courtesy of Rocky Gosson) 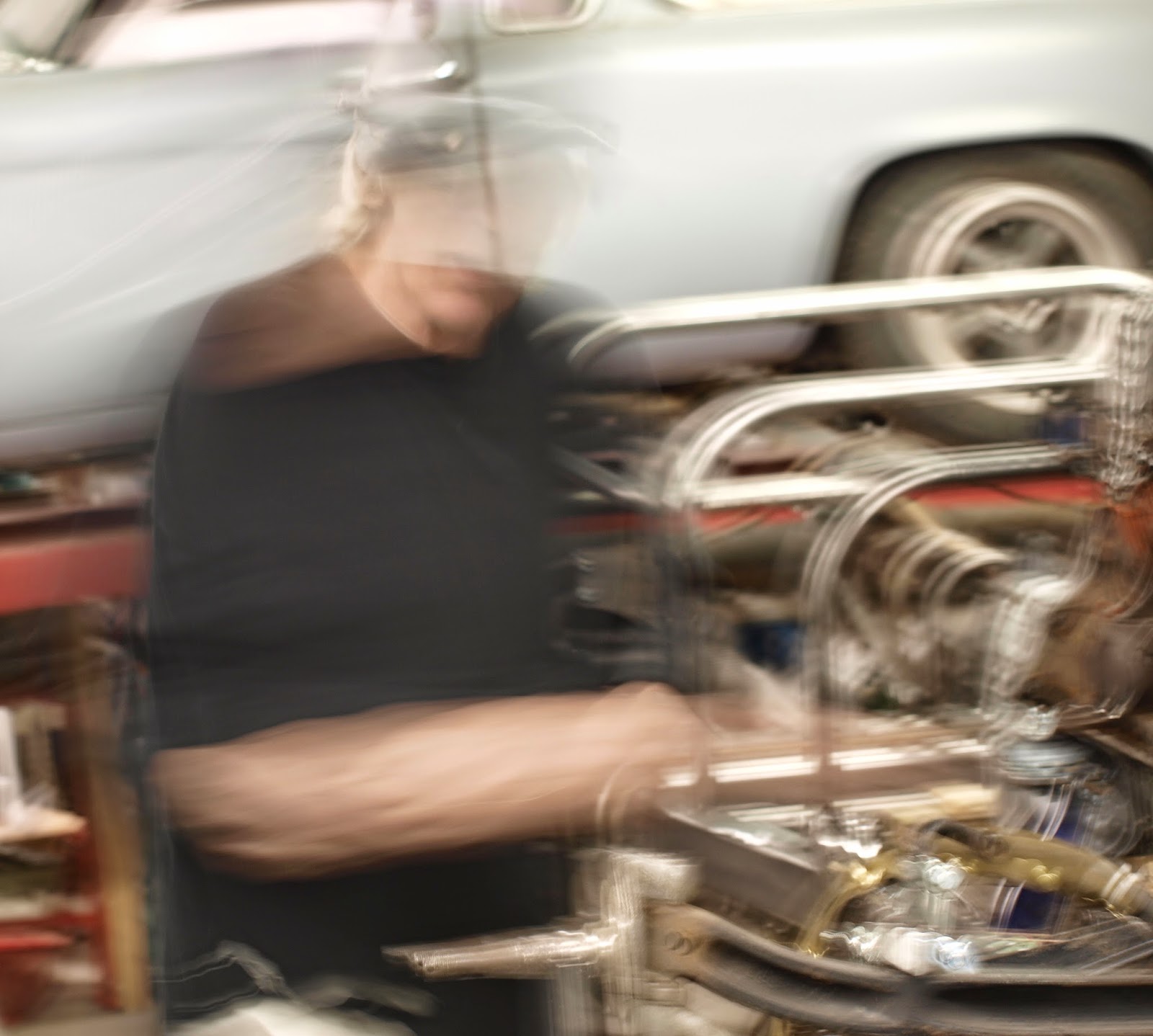 The Ghost of Doctor Lockjaw floated through the Custom Metal shop last Sunday... 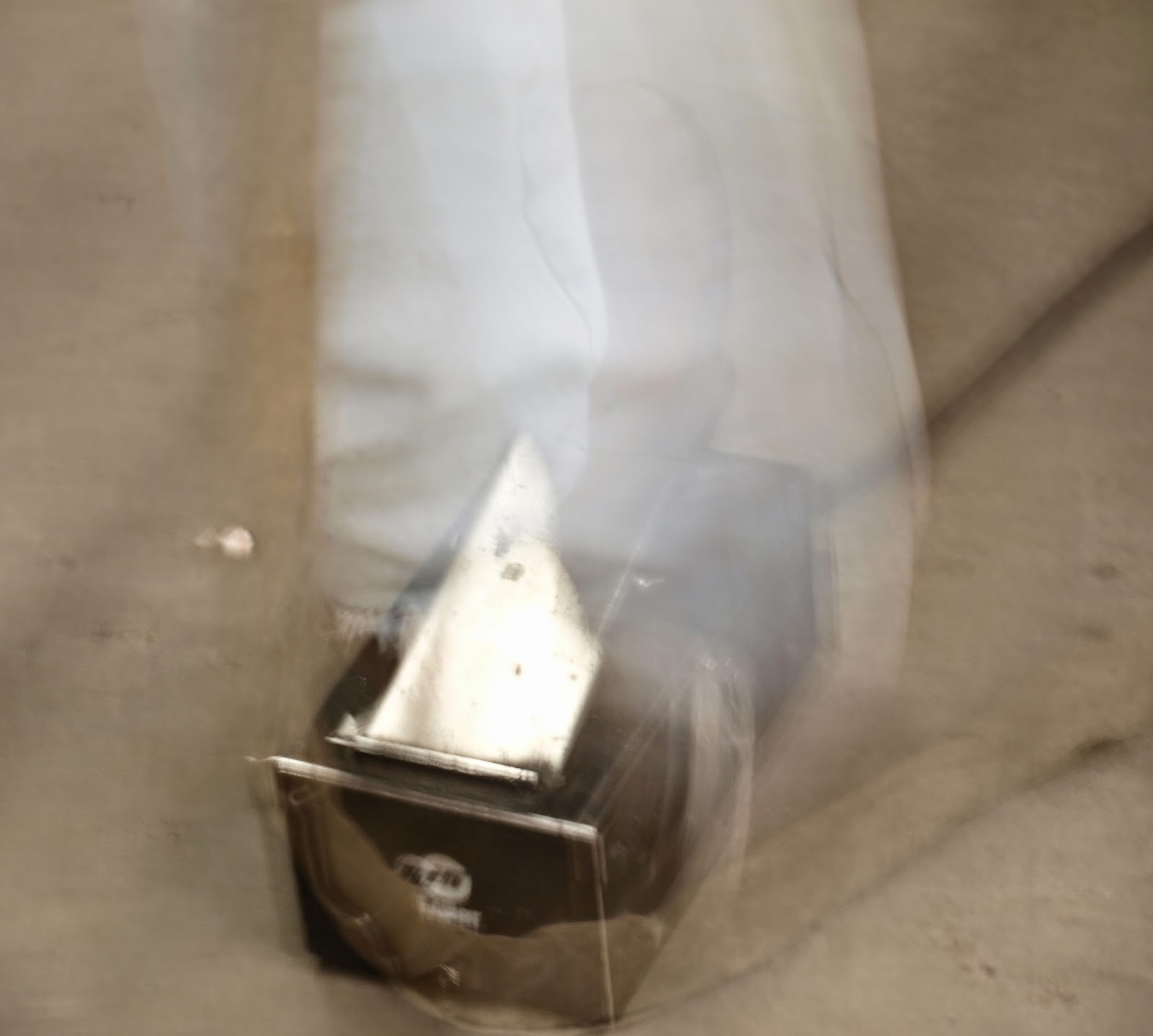 ... and wailed away on his hot rodded wah wah pedal just like Sly Stone! It was creepy-cool. 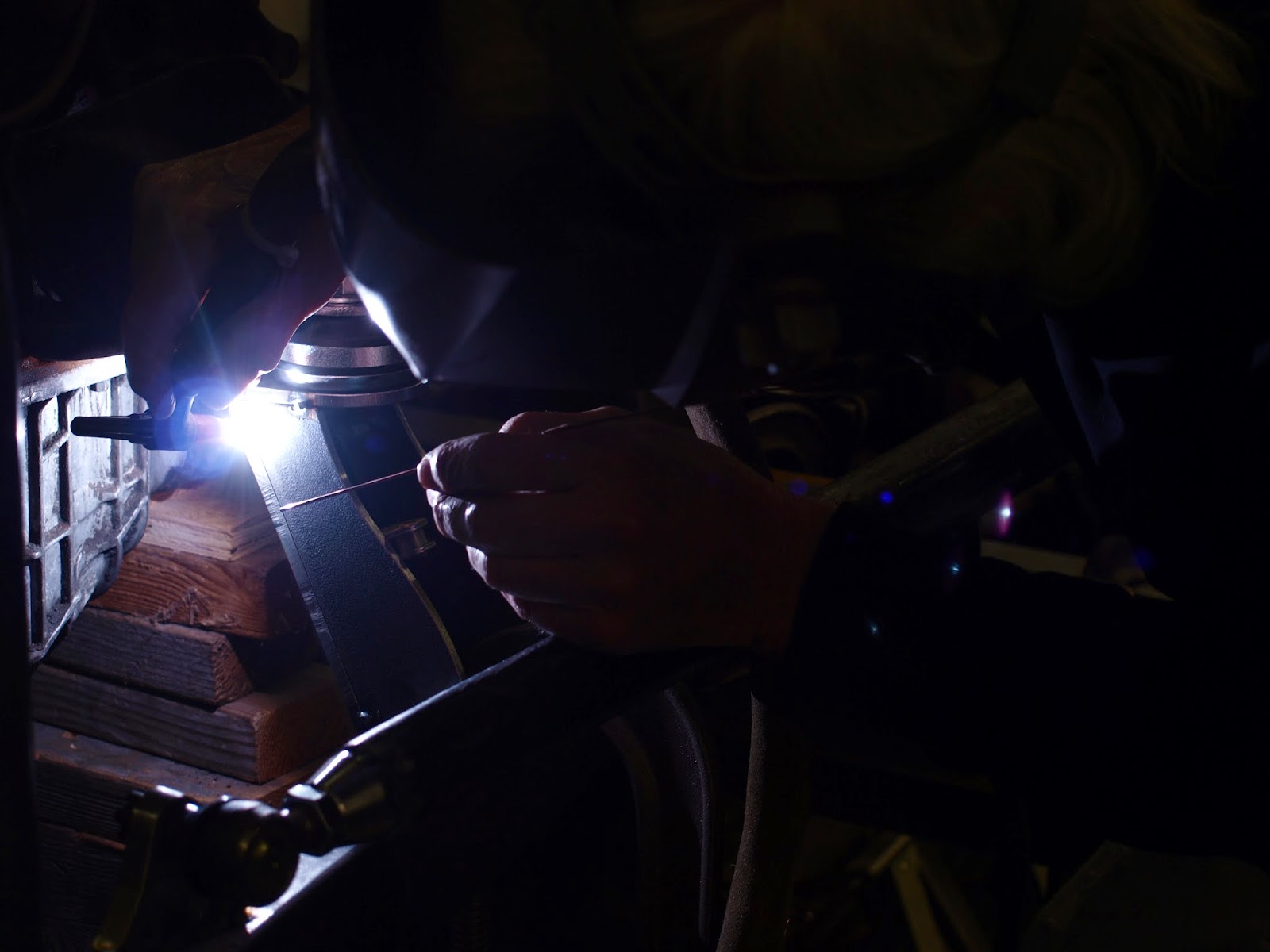 Then we tacked the sides on the SGE Model A motor mounts (passenger side shown)... 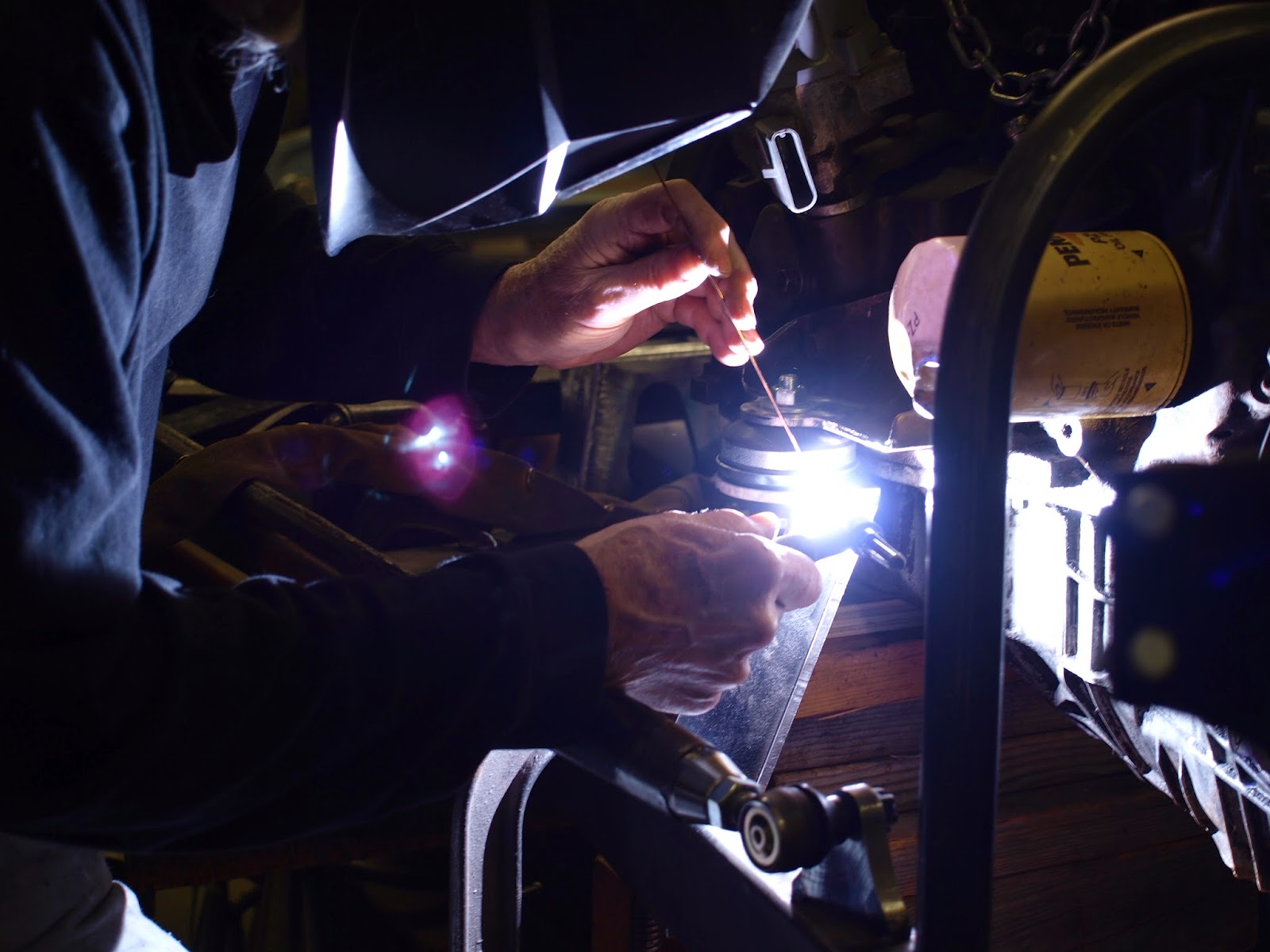 ... and fabbed up matching mounts for the driver's side. Doc puts the tacks to that one here. 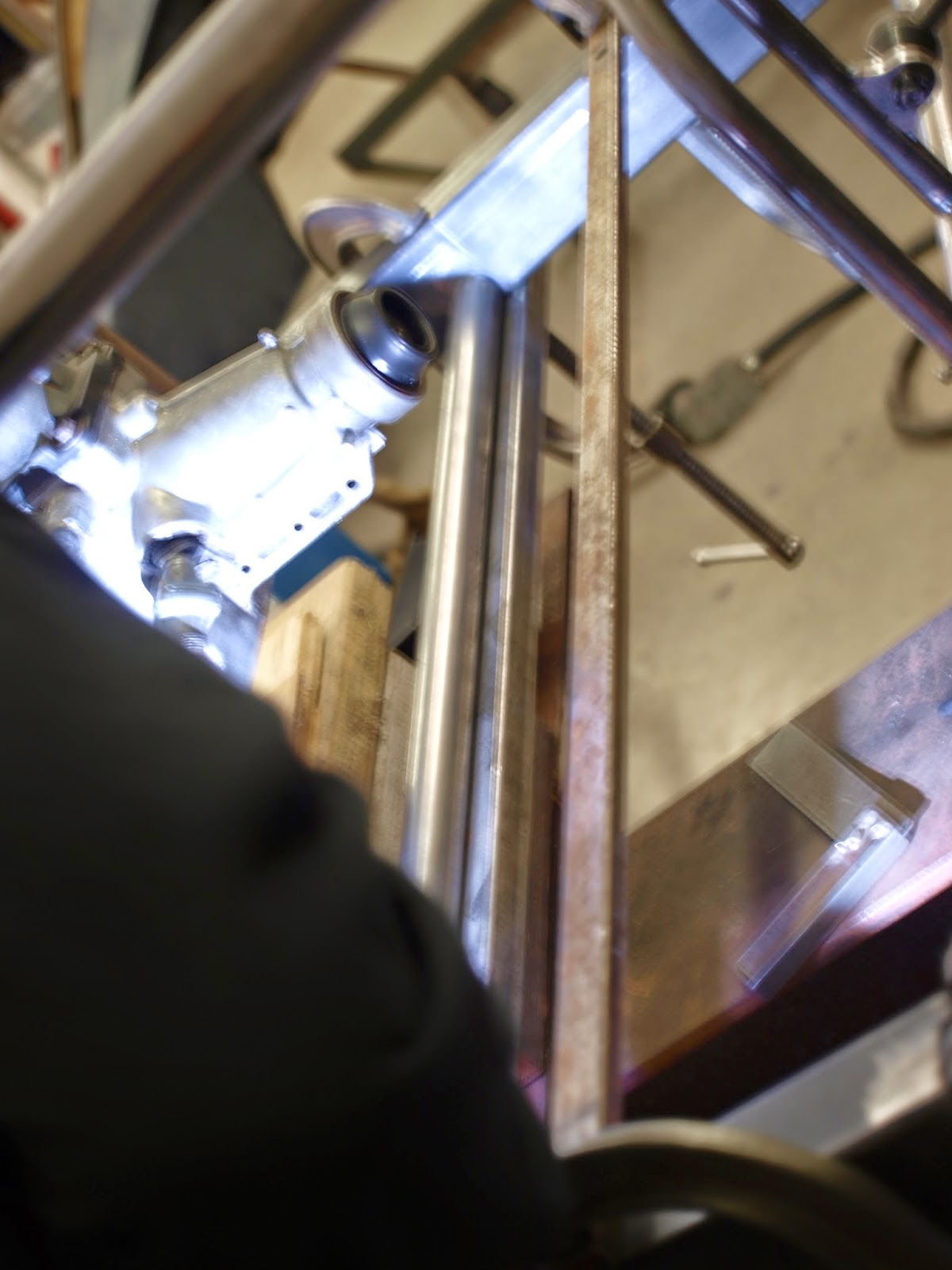 We also made and installed the trans crossmember and roughed out a tranny mount, to be finished and installed next week (this revolutionary design will be worth waiting for, trust me). All of these baby steps are starting to add up to something. (Scotty shots) 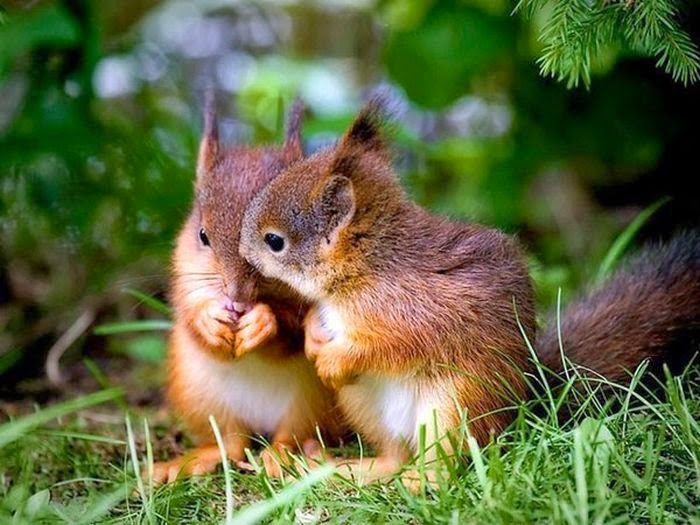 PSA: Keep each other warm this winter. Hypothermia is no joke. If you can survive this winter, spring shall be your reward. It's waiting just around the corner, honest engine. I'm no meteorologist, but I stand by this prediction: It'll be roadster weather before you know it. 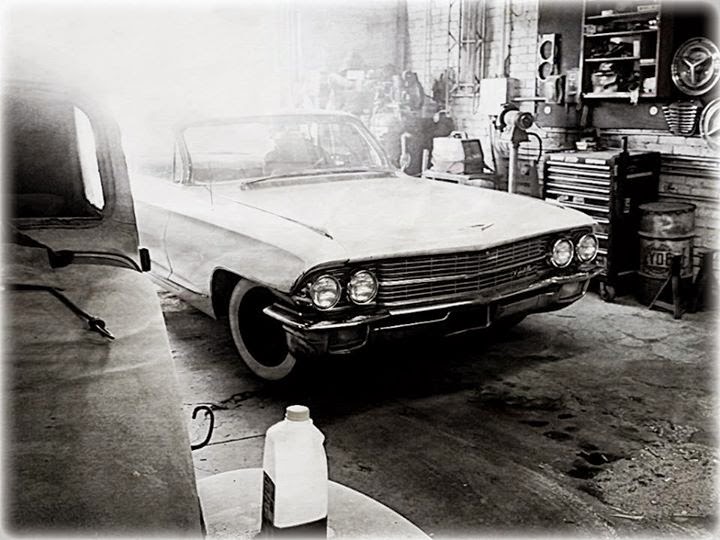 World renowned award-winning photographer Spike Kilmer caught Brian Smith's Cadillac sunbathing last week. Savor the sun showers when you can. I know what's in the jug, but I'm not talking. Instead, I direct your attention to the '80s-vintage Craftsman rollaway in the background. I've said too much. (Photo courtesy of Spike Kilmer) 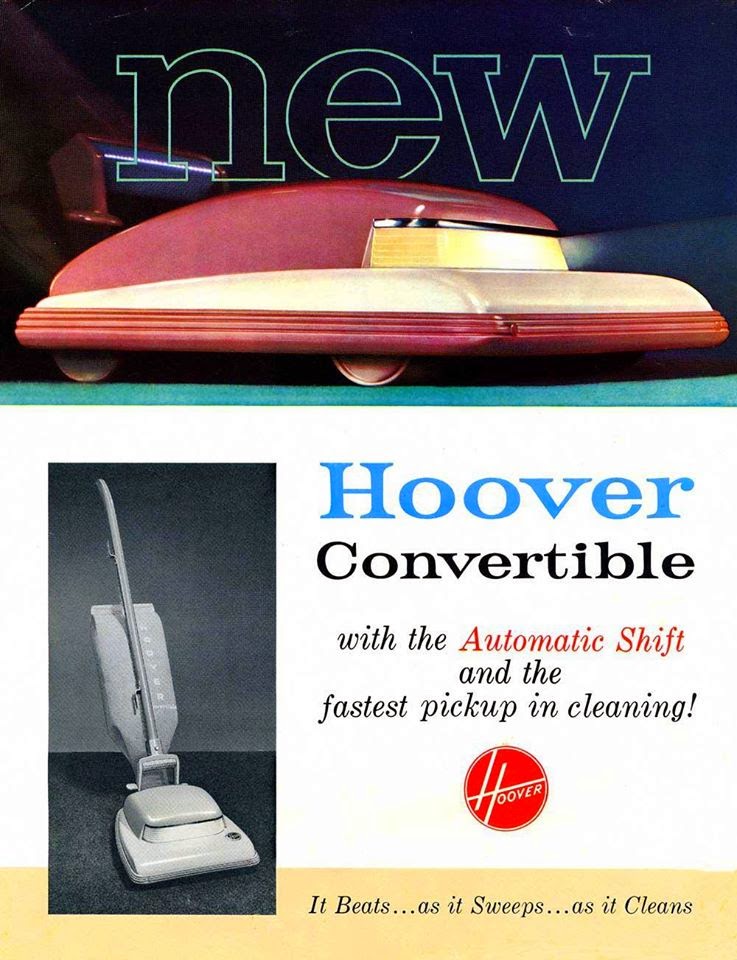