3:00AM
Here I am
Chasing my headlights down the road again 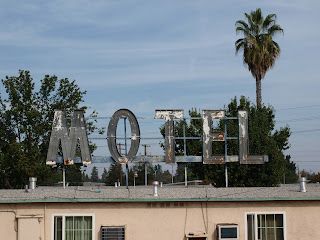 Lyrics from an old song I wrote. They convey the emotion of heading south to cover an event for a magazine last week. The assignment was to cover the 2011 NHRA California Hot Rod Reunion. Simple enough. My editor advised me not to concern myself with the political/business angle and to "Just get your ass down here, or you'll hate yourself forever". Unsure of the implications, I signed on anyway, anxious to jangle around the Bakersfield track, free of my usual crewmember duties that had previously denied me from experiencing anything beyond the pits and starting line. Mr. Ed was right - I'm very glad I went.

Bakersfield is a two day drive from the bunker. My beater station wagon probably gets 12 MPG on the freeway (with no speedo/odometer, it's hard to make an accurate guess). After much convoluted haggling, I had a borrowed '04 Honda for the week. My undertanding is that these modern cars actually make gas while buzzing down the highway. It also had A/C and a stereo. There was peanutbutter and jelly in the trunk and some good music on the box. I was livin' large for the first seven miles, then the bucking and snorting began. I pulled into Norm's Automotive on Hwy 99 South, where Norm and I deduced the original spark plugs in this 300,000 mile car might be the problem. Another problem was the required iridium plugs, which I paid $20 a hit for, slashing my travel budget in half, fifteen minutes into the trip.

Two days later, I arrived at Famoso Raceway ("Auto Club Famoso" in corporate speak). I covered the basics for the magazine: Trackside action shots, celebrities, etc. I also shot photos for some upcoming feature stories. It was fun. I met a ton of amazing people I never thought I'd meet in my lifetime and witnessed an overload of incredible cars and racing. But while trying to sleep in the car, out in the pits, the real story unfolded in front of me, every night. This event is a true reunion and these people were really happy to reconnect at this race. They were living life to its fullest. The following is what I experienced behind the scenes, mostly late at night, after the NHRA and SourceInterlink corporate drones were drooling on silk sheets in climate controlled hotel rooms. There was a veritible dragstrip riot going on, but unless you were there, this is most likely the only account of it... 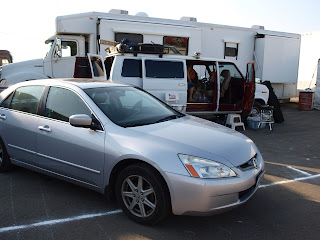 I arrived in the bug splattered Honda about the same time as my editor, in his Ford van (formerly a Fire Department Emergency Command Center). The van would be our mobile bunker for the week. 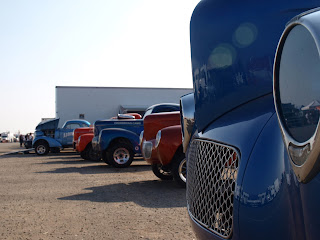 In a bold move (which I'm still applauding), the NHRA cancelled the usual AA/GS class (I love 'em, but let's face it - they've morphed into Pro Mods) and brought in actual gassers. Apparently, there were none on the west coast, as they imported the 'Geezer Gassers' from the midwest. These guys were having big fun and put on a great show. 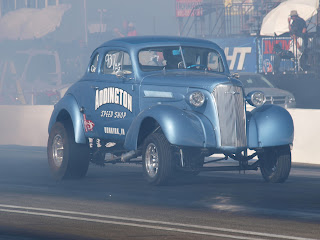 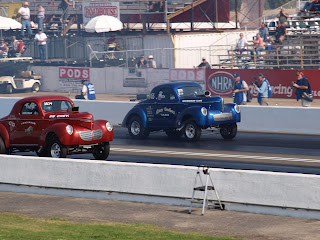 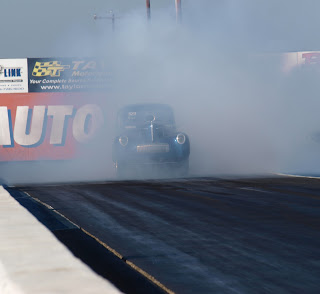 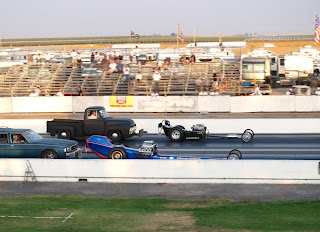 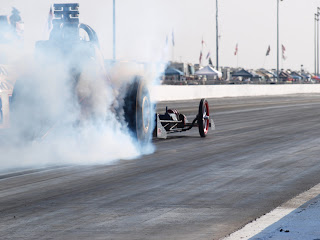 The joint was well stocked with vintage Fuelers and they ran 'em off in the traditional manner. Push starts were standard operating procedure.
Tony and Darryl Waters' modern 'nostalgia dragster' was typical of the present day fuelers, which were greatly outnumbered by gennie rail jobs at this event. 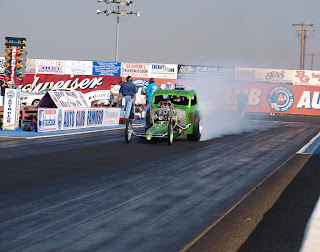 You can't have a nostalgia race without some Competition Coupes and Fuel Altereds. The Reunion had some of the best of all time. 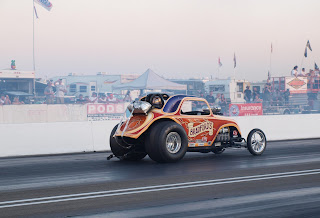 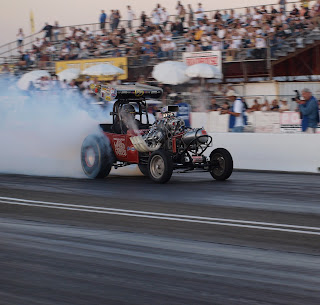 The Reunion is famous for its 'Cacklefest'. For this 20th annual edition, over 50 Fuelers were nudged to life and made laps around a makeshift oval track before covering the strip's entire centerline to cackle until the Moon tanks all went dry. The fans went berzerk for this spectacle, but personally, I found it a bit sad - weren't these things meant to go full out and scare the bejeezus out of everyone? PS: Sorry about the photos - not close to magazine quality, but plenty good for the SGE blog... 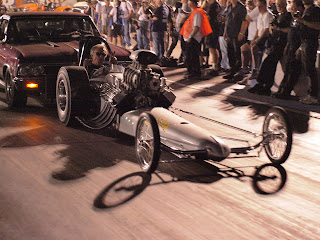 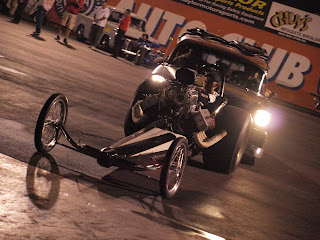 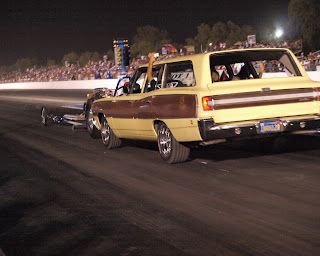 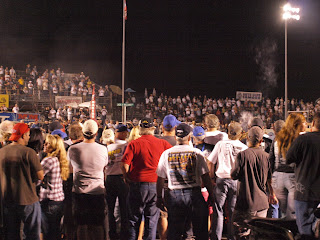 Did I mention that the fans ate this up? I stepped off the track for a minute and couldn't get through the dense crowd to get back in. Consequently, no shots of 50+ Fuelers belching flames at once.
So that's a very brief overview of what the average bear experienced. Here's what happened after hours. 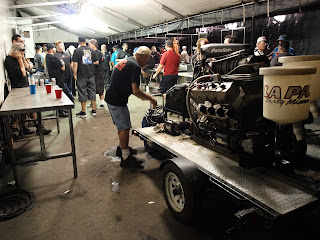 Most nights around 11:00, this nitro powered margarita mixer was fired up. In about 3 minutes, it mixes enough drinks to serve a few dozen thirsty racers. 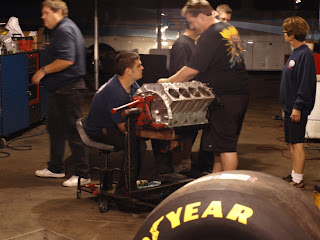 It may be party time, but there's still plenty of chores to be done. 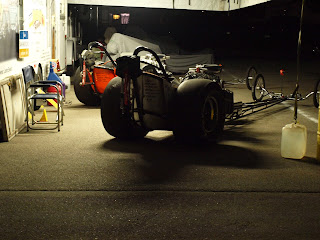 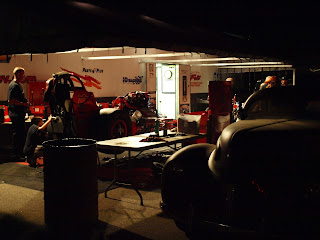 Saturday night was particularly entertaining. Besides the usual fireworks, BBQ and beverages, I noticed a rowdy crowd scene and went to investigate... 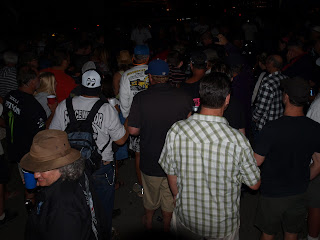 Buried somewhere in the mosh pit, Chris Karamasines ("The Golden Greek" himself) was gunning an ancient Fueler for all it was worth. A very rich nitro mix filled the air. I bumped into TV Tommy Ivo in this mob, too. 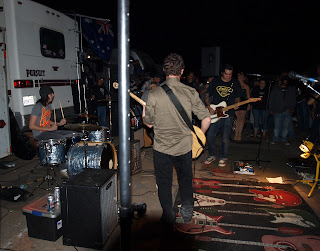 When The Greek's fuel ran out, the crowd cleared to reveal this garage band. They led the throng in a funtime sing-along anthem, "Fuck the Police". Someone waved a sign reading "Occupy Famoso!" It was a sweet moment of solidarity. Against something. 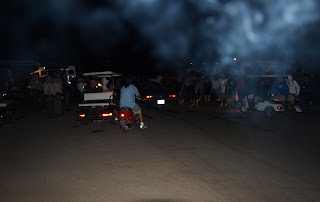 That's when the beer burnouts got going in earnest. 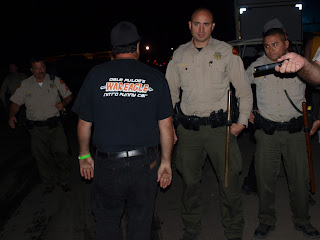 And that's about the time I wandered back to the Honda and called it a night. I locked the doors.
As per SGE tradition, here's some random shots to hold you until next time... 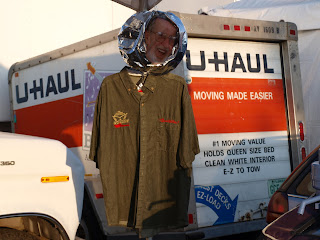 Pioneer drag journalist Dave Wallace Sr. passed away before being knighted as one of this year's Honorees. But he was there in spirit. 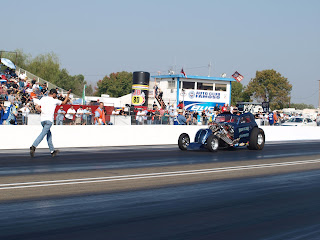 One of my local gang, Frank Miller, was running his Fiat at the Reunion. That's my neighbor, hot shoe Ronnie Mankins, backing Frank up. They did okay - didn't crash, blow up, or catch any STDs... 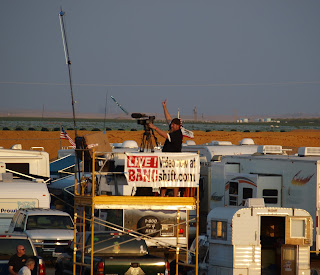 Maybe you watched the event on Bangshift? Chad Reynolds always has killer coverage(!), but he didn't catch everything that happened... 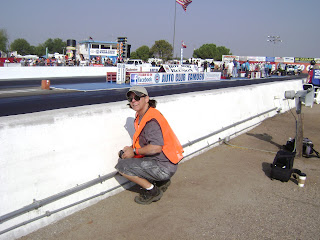 Ronnie got a shot of me actually working. A real collector's item! 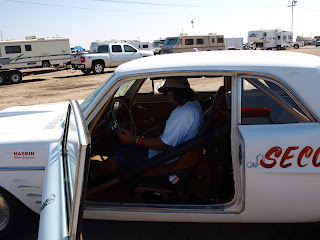 I shot a feature on this Tempest. Afterward, the owner caught me in the act of taking it for a test drive. This opened a can of worms I may regret down the road, but for now, I'll just say I'm excited about a possible future project... 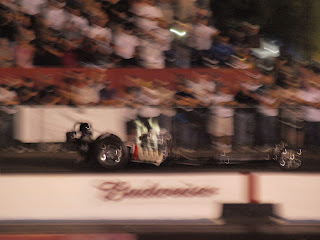 If I had to represent the week with one image, this would be it. Overwhelming, but worth every fried brain cell. I think. 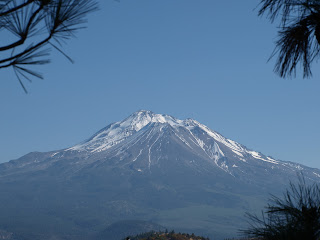 Once Mt. Shasta filled my windshield again, I finally believed I could make it the rest of the way home. I did.

Now, if you'll excuse me, I have several deadlines looming. They're all due in the next 48 hours.
Thanks for riding shotgun and keeping me company.
See you next week,
Scotty