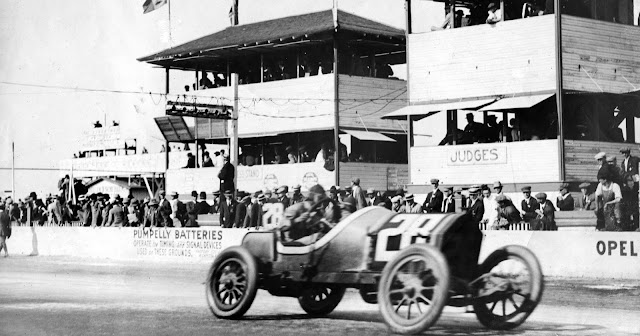 Welcome race fans! It's time once again to stock the coffee table with consumables and kick back in front of The Greatest Spectacle In Motorsports. Pepto Bismol optional. Hard to believe we've been doing this since wheels and tires were oval...

It is (painfully) well known that I have little knowledge of open-wheel circle track racing. But that ignorance won't keep me from celebrating the 100th Indianapolis 500 on May 29th. Besides, since when has a little detail like total ignorance kept me from telling a story in absolute terms? I rest my case.

Indy cars have fascinated me since early childhood. Before I became aware of Indy's deliciously rich history, I was just drawn to the cool factor: The cast aluminum and magnesium, the injector stacks, the whine of the quickchange and the shriek of the redline hypnotized me. The hardware was enticingly different than the dragsters I drooled on, yet still familiar enough. I soon realized the root attraction was that of any single seat race car: A hot rod stripped down to its essence. Beautiful simplicity.

The first few 500s I followed were on the radio. It was quite the novelty to see my dad so turned on and focused. He was still deep into the Harley Davidson thing then, but would later acquiesce to my brother Rocky's influence and become a hot rodder himself - perhaps in part, due to digging on the Indy 500. The old man and I never did learn to get along, so those memories of hunching over the radio together really light up my rearview mirror.

Chances are, just about everyone has had an equally personal experience around this event. I haven't spoken with everyone on Earth yet, but those I have questioned all had Indy stories - and most were much more interactive than pressing their ear to a radio speaker. I think what sets Indy apart from other motorsports events is the majesty of it. I mean, as dramatic as they are, you can't begin to really experience a drag race or landspeed event via television, but just listening to the Indy 500 on the radio makes your feet vibrate with the power of the pack passing by - you feel like you're right there. That's some pretty potent majesty. Respect! And Happy Anniversary, Indy! May you enjoy many more. 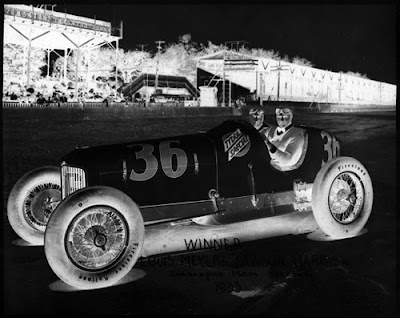 So, blissfully free of actual knowledge, I set out to become an Indy expert in half an hour. Expert enough to salute the singular 100th running, anyway. Racing the clock was fun, but the real pleasure was accumulating sufficient background data for you you to be an informed viewer on race day. You're welcome. I found some interesting (but uncredited) photos online, as well as enough historical headlines to make me dangerous. Here's an example: Louis Meyer (above) took the 1933 checkers. Development of the Meyer/Drake/Offy engine program was just coming to fruition. It soon became a longstanding monopoly. 25 minutes to go. 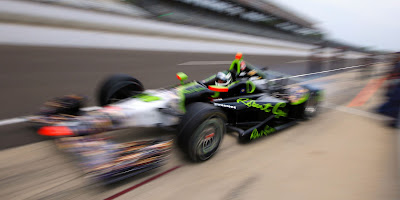 Photographed from nearly the same spot on the track as the above shot, this current entry illustrates Indy Car evolution since 1933. Photography has also evolved in that time. 24 minutes left. 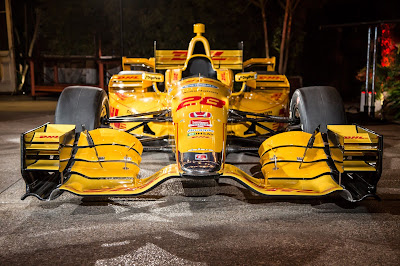 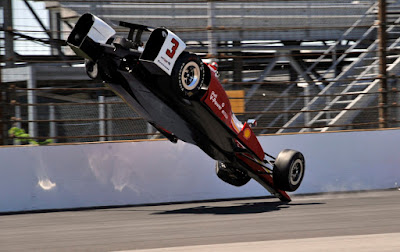 Why all of those spoilers, wings, canards and foils are important. 22 minutes from deadline. 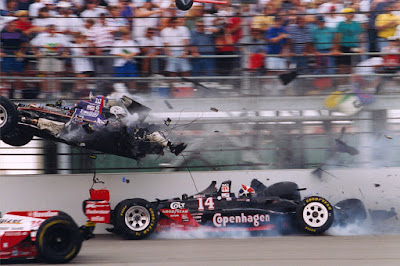 Of course, there will be times when all the aero management on Earth won't keep you on Earth. 20 minutes of research left. 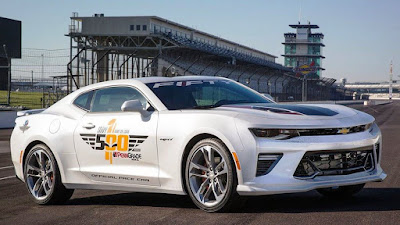 The invention of the pace car was manna for Detroit. Indy and Dirty D have been holding hands ever since. The 2016 Camaro somehow superseded the Corvette for Indy's 100th anniversary. We may never know the true impetus for that decision. 18 minutes from takeoff (took a couple minutes to find the pace car photos). 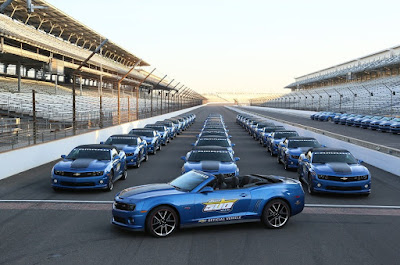 Gotta keep some spare pace cars on hand, in case a few dozen of them get totaled in a freak accident. Pace cars are very good business. Only 17 minutes left, but at this pace (punny), I'll ace this test! 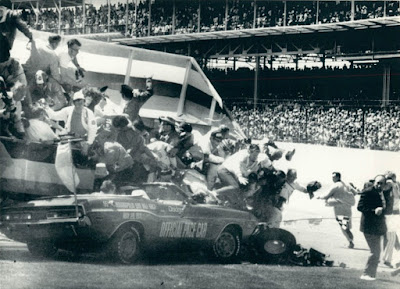 The justification for 24 extra pace cars. Indianapolis car dealer Eldon Palmer lost control of this Challenger pace car at the start of the '71 race with track owner Tony Hullman riding shotgun. Astronaut John Glenn and NBC Sports announcer Chris Schenkle were in the back seat. Palmer entered pit road at full song and power-slid into the photographer's stand at the end of the line (at 125 MPH). Dozens were hurt, but miraculously, there were no fatalities. 3 minutes remaining - I got hung up reading about this incident. 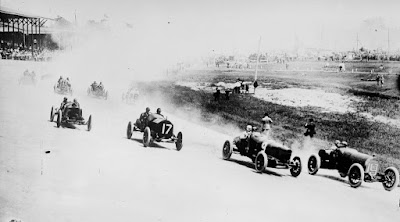 And they're off! This image is purportedly the start of the inaugural 1911 Memorial Day Classic. The two-man teams (driver and mechanic) had no choice but to become dust devils for the day. But the dry stuff  washes right down with a bottle of chilled milk. Damn! Missed the checkers by 5 minutes (had to pee)! But now I'm an Indy expert, so you don't have to be. 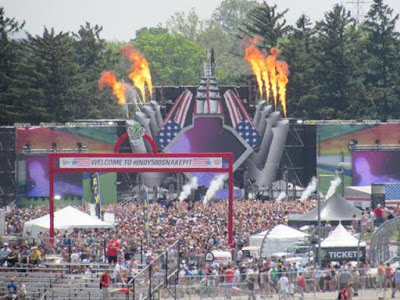 I've only visited Indianapolis twice: Once at the drag strip (Indianapolis Raceway Park), and once to play at Indianapolis Motor Speedway's infield music festival during qualifying  for the 500 (represented by above photo). Both adventures were life-changers. On our day off at the speedway, I got to spend a few hours in Gasoline Alley with some Pontiac engineers sorting out the new Fiero pace cars. For the rest of the day, I was stationed at the end of pit road, watching cars approach turn one at over 200 MPH, then hanging a hard left, right in front of me. Missed the race though.

Okay, you deserve better than a know-nothing wise ass tour guide, so we brought in an actual attendee of the Indy 500 to take over. SGE Rocky Mountain correspondent Pete Garramone (see interview two weeks ago) and his buddies road tripped to Indy in 1956 and Pete took photos. Now we're getting somewhere! You are now the narrator, Pete... 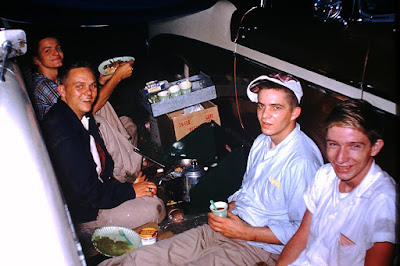 "I remember borrowing an Argus C-3 to shoot these photos.We sat on the backstretch of the infield and had breakfast, sitting between our two cars." Dig their brand new '56 convertible. 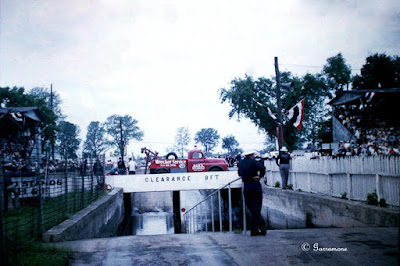 "'The greatest spectacle in sports' was right, back then. I had never seen so many people at one event in my young life. There were probably as many people who didn't get in to see the race as there were inside." 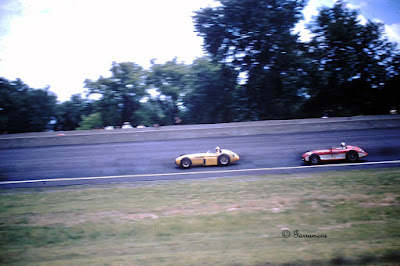 "I think that's Bob Sweikert in the yellow car (might be Sam Hanks), and maybe Dick Rathman behind him." 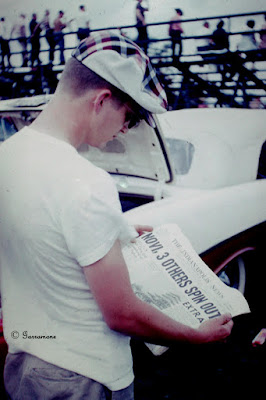 "A newspaper was printed while the race was going on." (Photos courtesy Pete Garramone) 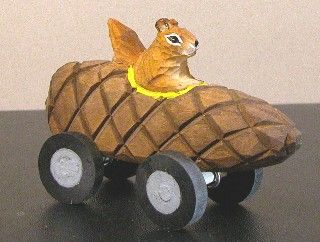 If all of this roundy-round talk is driving you nuts, you're not alone. Where's that drag strip exit? 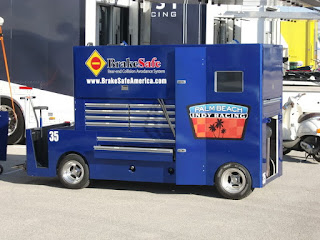 You know you've arrived, when you can actually drive your toolbox around the pits. If you don't have one of these, you're nobody, pal. IndyCar wrenches know how to live well. 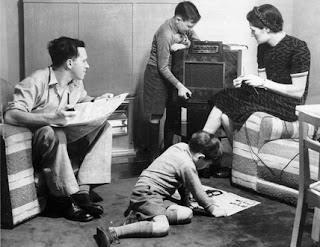 Not really my family, but it sure could be. I swiped this image off of the Bing photo site. Will put it back, after you read this post. 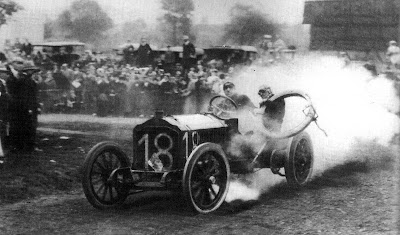 I went a little nuts on the history of Long Island New York's Vanderbilt Cup races (run from 1904 to 1968) in my introduction to the New York National Speedway feature in the Lost Drag Strips II book. These incredible 'over hill and dale' events drew racers from around the globe, which drew massive crowds, which drew the media, which drew event promoters, which drew flies. 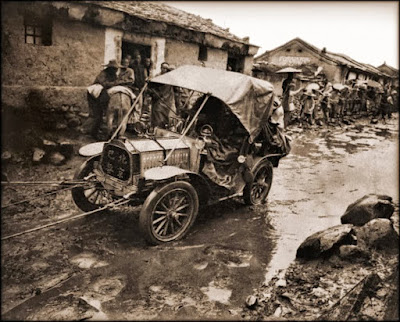 By 1907, the burgeoning motorsports phenomenon had already become a global game of one-upsmanship. European enthusiasts trumped the American Vanderbilt Cup races with the Peking-to-Paris run. Forty international entries hightailed it (for about one day), before bogging down in the undeveloped backlands of what we now call Beijing. Cars were pulled through muck with ropes (above), fell over cliffs, and were swallowed by quicksand. With no gasoline for hundreds of miles, teams made do by burning benzine (it burned, but so poorly that pedestrians were passing the cars). The event took months to conclude, but the survivors remain the definition of hot rod badasses. 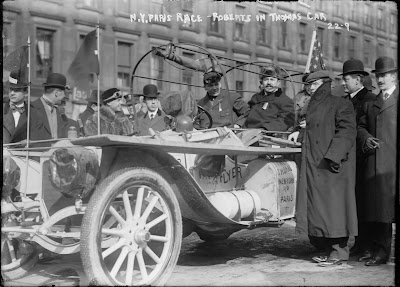 In an effort to hold fans' attention after the marathon Peking-to-Paris debacle, the relatively short New York-to-Paris race was presented in 1908. The route was devised to take contestants from New York City to Alaska, then cross into Eastern Europe. But impassable cold forced the pack back down to Seattle to catch a freighter to Yokohama, instead. From Japan, they raced to Siberia (mostly on railroad tracks), where American George Schuster finally crossed the line first on the 4th of July in a Thomas Flyer. Don't know who the "Roberts" is in this photo.

All of that, to illustrate the magnitude of Indianapolis Motor Speedway's achievement. The above events were epic beyond comprehension, but were never repeated. Hundreds of other races worldwide have been declared classics. But from the inaugural green flag on May 30th of 1911, the Indy 500 has been considered the best. Period. For a hundred years now. It is very doubtful that any other racetrack or event will ever break that record. Whether you're front-row-center at the speedway, splayed on the couch in your unmentionables, or strapped into your race car: Happy viewing!