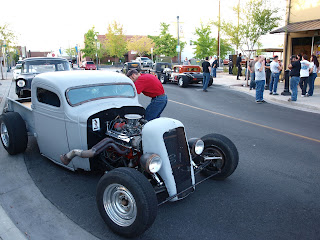 Le Cinema has been insidiously creeping into my peripheral vision in recent years. There was my doomed hot rod music video opus (Roll) that literally crashed and burned, after 5 years of work. Soon after, I learned that Top Fuel shoe Adam Sorokin (a new pal at the time) remastered film and video for his day job. Then Faith Granger crashed into Scottyville with her Deuce of Spades film. Last year, my friend Holly Felsen reported that one of her dad's stories is being made into a movie. Earlier this year, my plans to write a biography on American hero and street race icon Big Willie Robinson were squelched because his story is being made into a trilogy of films and the studio holds the rights to his story. While at Bonneville for Speed Week last month, I attended the premier of The Boys of Bonneville in a spectacular theatre with a few thousand other crusty salts. Then last night, I got a phone call from fellow local yokel Chris Darland.

Chris (an ultra-independent film maker and hardcore hot rodder) was screening selected scenes from his first full length feature film (American Thrill Ride) and invited me to sit on the jury and bust chops along with the rest of the people involved. I reflected on the above examples of cinema connectivity, then thought of my link with Chris.

As a pre-pubescent elfin street punk with a chronic case of Go Fast fever in the mid 60s, I was begrudgingly friended by a neighborhood hot rodder who sometimes let me wash parts and hand him tools while he built his blown smallblock powered '33 Willys coupe. Bill Darland was an "old guy" (probably pushing twenty at the time), but took time to demystify the workings of this badass street/stripper to me. I was beyond honored. Bill taught me some basic theory that has served me well over the years. We both survived the 60s and went our separate ways. Decades later, I started running into this Chris guy at drag races, swap meets and other gearhead gatherings. We were finally introduced by a mutual friend (fast street car guru Charlie Allin) and I discovered Chris' last name was Darland. Bill is his uncle and had shared his expertise with Chris, inspiring and educating him just as he had me. Besides that common denominator, I instantly sensed that Chris 'gets it' - that hot rods are toys to be played with and are not necessarily status symbols. Plus, he's just an easy guy to hang with.
Chris builds cars at his shop, Chris' Hot Rodz, by day and makes unabashedly sophomoric comedies at night (heavy on the 'night' - this guy hasn't slept a wink in 15 years). 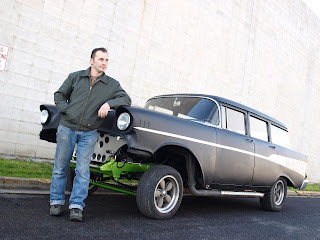 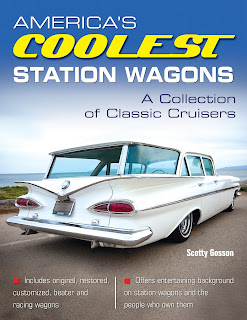 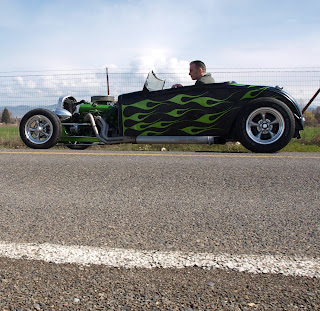 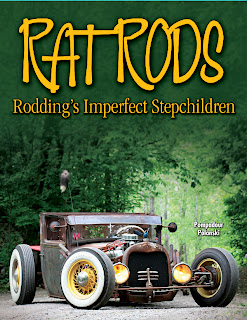 Shameless spam! Chris and his cars have been in two of my books...

So when Chris called about the screening, I cranked up the wagon and rolled down to Johnny B's, a tiny rockabilly joint on a downtown side street, where the screening took place. The invitees were almost exclusively participants in the project (my hot rod Morris plays itself - a psycho street racer - in a bit part) and all are friends. Basically, we broke into Johnny B's and threw a private party. My only expectation was to have some laughs with my friends. And my expectations were met, head on.

After much nervous flitting about, wrestling with tech demons, and the world's most succinct introduction ("Here it is"), Chris showed us half a dozen finished scenes from the film, as well as a lengthy string of out takes. The scenes we witnessed were surprisingly realized, considering none of the actors have had any experience whatsoever, beyond Chris' direction. Production values exceeded expectations. And the bottom line: It was funny. Imagine a parody of Two Lane Blacktop, with more plot, more action and way more dialog - acted out by individuals who'd rather do time in detention than attend a drama class. Part of the fun was watching these guys try to crack each other up on screen - it was palpable. And contagious. More so, when the out takes appeared. These guys are all naturally hilarious anyway (another reason they're all friends), and the bar was raised even higher when the cameras rolled. My side literally aches today, from laughing so much last night. Of course, a big part of that is because I know these people. Will Joe Toolbox find the film as amusing as we did? This reviewer had too much fun watching American Thrill Ride to care what others may think of it. Five stars!

This was the polar opposite of the Boys of Bonneville experience. Luckily, I can look to each end of this spectrum and honestly say that I enjoyed them both equally. How often does that happen? Maybe somebody should make a movie about this phenomenon. Meanwhile, I know Uncle Bill must be very proud... I am.

Keep an eye on www.divebombersgarage.com for a release date on the film. Give it a couple of years. While you're waiting, you can see some of Chris' learning curve in action on the site. 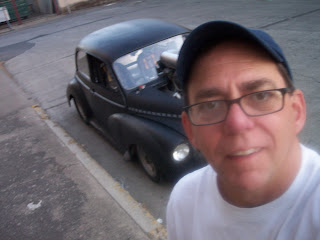 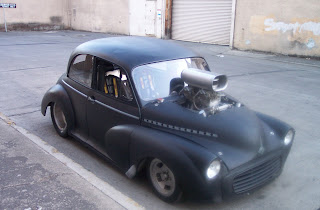 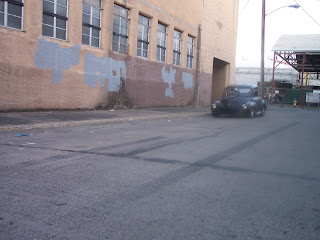 Crappy snapshots of the Morris and I on location for a street race scene in American Thrill Ride. This shoot went from 7:00PM to 2:30AM. My race against an undercover detective in a '34 roadster took two takes and I freight trained him both times. Heh, heh... 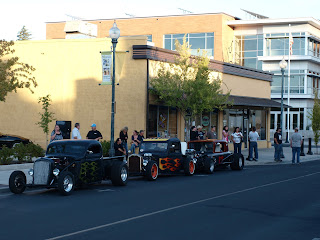 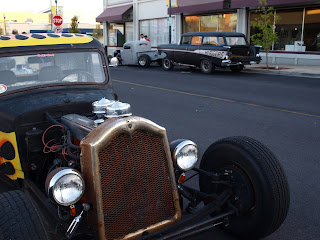 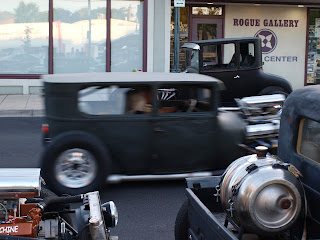 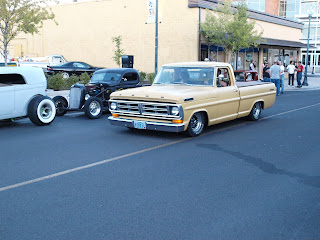 Hanging out in front of Johnny B's waiting for showtime...