AND HE STUCK THE LANDING! 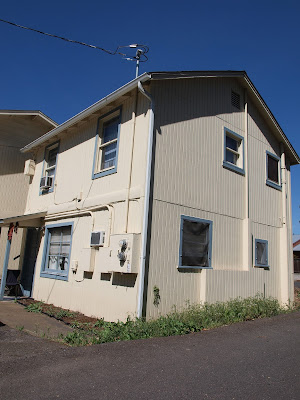 Home at last! It sits at the end of a dead-end midtown street - nice and quiet. The upstairs is all mine. This structure was built in 1948. The large building in background holds four more units, one of which is occupied by a Georgia woman who ran Fuel Altereds with her husband in the Sixties. She's a painter now. Her current guy is authoring a book about an abandoned amusement park. Small world. 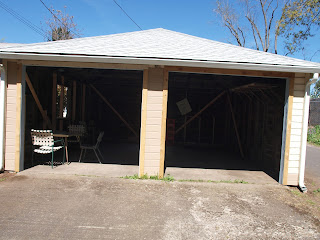 Also constructed in '48, this two-car garage (currently being restored) should make a comfy nest for the SGE Model A project... 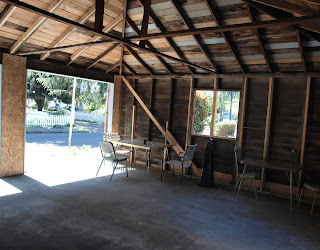 ... I just have to convince the landlord and the other five tenants that this is a good idea. Wish me luck with that. (Scotty shots)

My friends tell me, "You have an uncanny knack for landing on your feet." True, I've been lucky to land on all twos, but take no credit for it. I know from experience that if I'm willing to do the legwork, things will work out however they're supposed to, and that result usually surpasses any efforts, hopes or expectations on my part.

The latest example of this phenomenon played out last Friday. During my recent weeks of aimless drifting, I somehow managed to fill out enough forms and jump through enough hoops to animate some very rusty wheels. There were admittedly some dark moments when I questioned my future, but some pesky inner voice kept reminding me not to give up five minutes before the miracle. Sure enough, on Friday I signed the papers on an apartment. At this writing, that's been five days ago, but I'm still riding the pink cloud of gratitude!

Great thanks to the Veterans Administration and the local Access office for finally implementing their Veterans Now! program. They scooped me up and put me in an apartment (which I love, so far), and are working on even more benefits for my future. Again, I did absolutely nothing to earn this generous gift. I was a total screw-up in the Army and still am. But I apparently have more work to do. This time around, I'm making an extra effort to do work that benefits others. That seems to be the primary lesson presented to me lately. I feel very small. And I can't stop grinning. 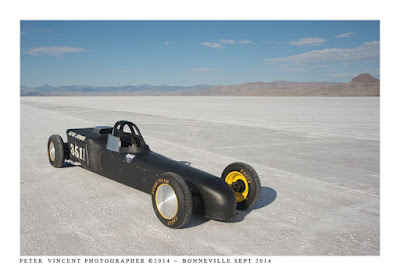 While I was busy doing nothing, SGE Northern Oregon correspondent Marty Strode was doing plenty as usual, thanks to pesky customer and longtime pal Jim "Little Bastard" Lindsay. Remember Lindsay's blown flathead Modified Roadster landspeedster? Marty reports that the former salt blaster is now now being prepped for its next assignment: "He's going to run it at El Mirage dry lake in May." (Photo courtesy Peter Vincent) 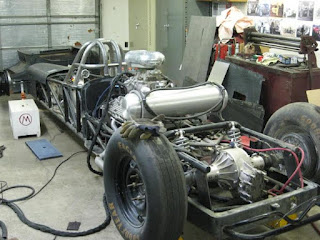 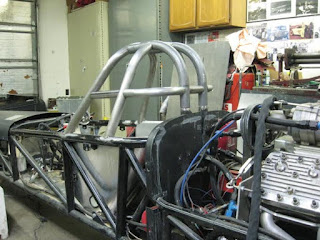 "Jim decided he could sit a little lower in the seat, so I built a new 'cage, three inches lower." 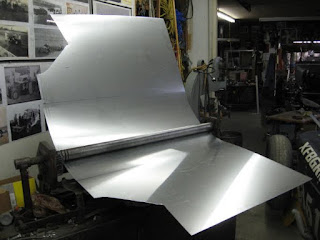 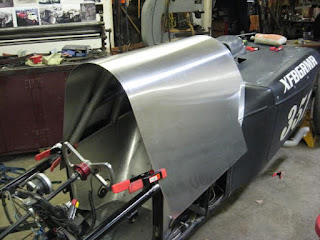 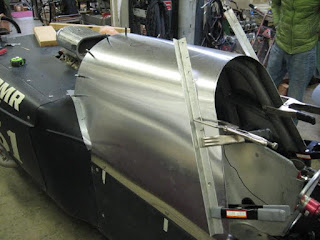 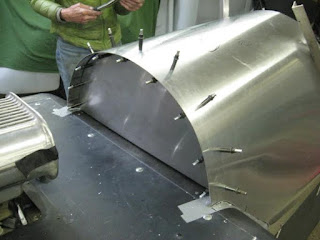 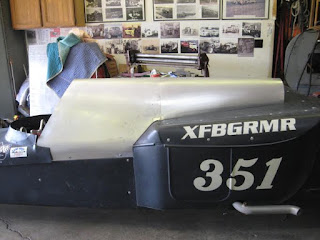 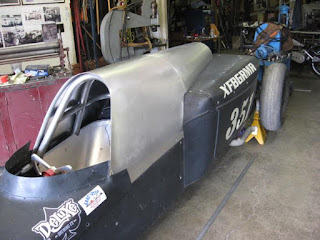 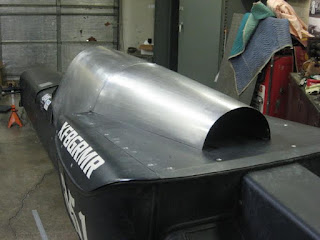 "Jim also requested that I enclose the rollcage in aluminum, and extend it to the rear for some streamlining." While he was cheating the wind, Strode also installed Moon discs to the inner front wheels, noting, "I'm going to make an attempt to clean up the aero factor in the front axle area." 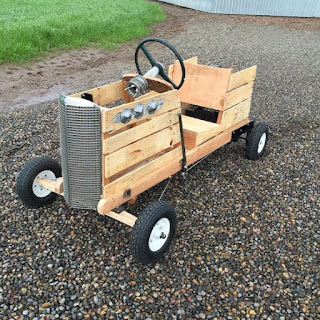 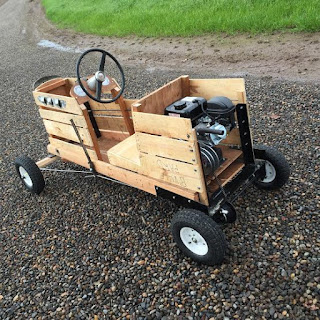 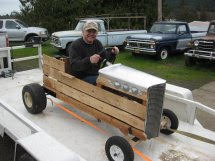 While researching obscure aerodynamic trickery, Jim Lindsay happened across the forgotten world of crate racing. Consequently, Marty whipped up a hood for Lindsay's tribute to his hot rodding roots. And yeah, it runs a crate engine. (Photos courtesy Marty Strode)

Make no mistake, a loyal support vehicle is crucial to any shop or racing endeavor. So when not fabbing for the stars, Marty Strode has been steadily assembling his latest road dog, a '53 Ford cabover. For those not familiar with the project, here's a brief Q&A session with Marty.

Q: You started with a low mileage original truck. How does that happen?

A friend of mine was moving some trucks around during the filming of The Hunted, starring Tommy Lee Jones. They had modified four Grumman bread trucks to resemble paddy wagons, and rolled one over during a scene. They were 1979 Ford E-350 chassis, with 351 Windsors and C-6 transmissions. When the filming was over, my friend was told to take them to the scrap yard, but he hauled them to his storage unit. He gave two of them to me, and I was able to make one decent one by cutting the cab portion off just ahead of the sliding side doors and building a front section that matched the early cab. I installed a 460" engine with a Comp Cams 260H, Dougs Headers, and a U.S. Geardrive behind the C-6.

The box will have two swing-out doors in the back. I'm going to build something similar to a tilting car trailer frame that will mount inside. It'll have a winch, and double-folding ramps that swing up 90 degrees and pin in place. The whole unit will be removable in a few minutes with a forklift. With a hot rod or race car loaded inside (and a vacation trailer hooked to it), with A/C, cruise, and airbags, travelling around the U.S. will be a pleasure. 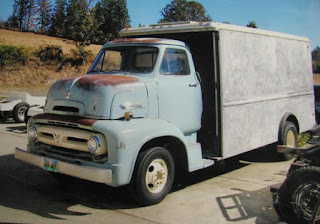 Yet another retired movie star takes up residence in Oregon. But Marty Strode's training regimen will soon have it fit for summer touring. 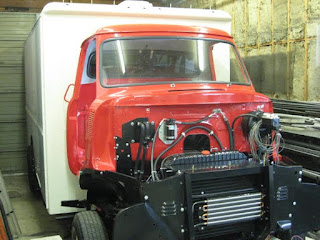 The majority of the wiring has been completed since our last update, when the '53 resembled a spaghetti wagon. Much better now. 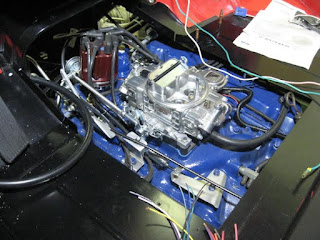 This warmed-up 460 now occupies the dog house. Thanks to a supplemental U.S. Gear overdrive, the gobs of bigblock torque should ease the cabover right on down the road. 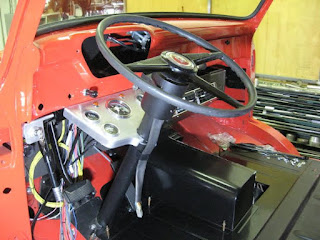 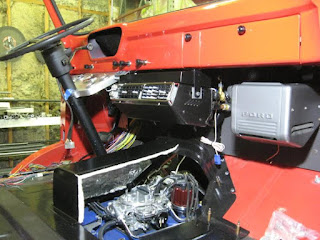 All the comforts of a new millennium apartment. Bonus points for the trick cutaway photo! (Photos courtesy Marty Strode) 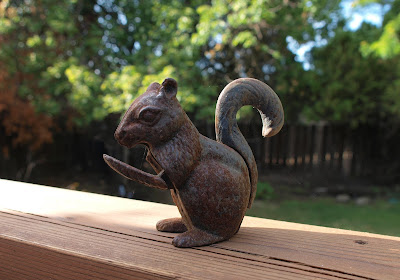 Cast iron squirrels are scarce enough, but this example doubles as a nut cracker. Thank you for your service, sir. This guy is a fixture at James Drive Studio, where we just finished the latest Scotty Gosson Combo album. Expect spam soon. Meanwhile, we've started on a third album, featuring all vocal songs, with lyrics and singers and everything. (Scotty shot) 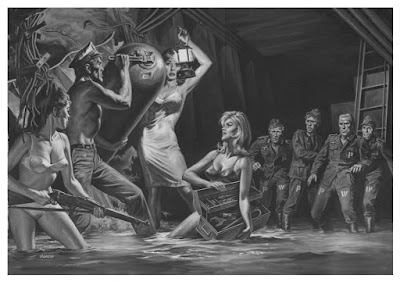 When the heat is on, save the tools first! (Image courtesy Craig Clents) 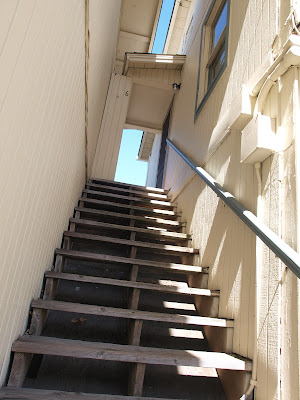 My personal stairway to heaven. How heavenly? There's hot and cold running water, a bedroom, bathroom, kitchen, and a living room up there. And the key to the place is in my pocket. Somebody throw me a white gown and a damn harp! (Scotty shot)