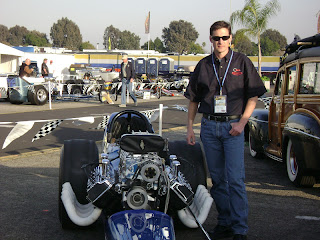 Young lion, hungry for speed at the feeding grounds. James Warren and Tom West loiter in the background, while Ronnie hangs with The Hawaiian at the 50th Winternationals. 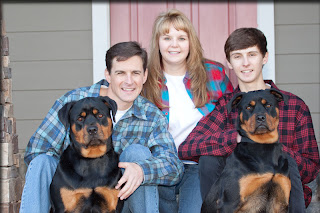 Back row,L-R: Ronnie, Kelley and Taylor Mankins, who has picked up the torch and is running with it. Front row: Photo session security provided by Roxy Ann and Remington Grace. 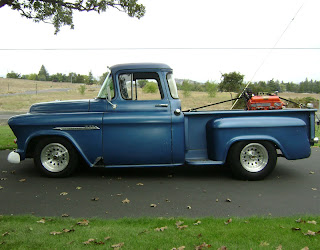 He lives down on the corner. When you drive by his place, you can occasionally catch a glimpse of him walking from the house out to the garage. He’s a fixture in any crowd. His face pops up at almost every event I attend – always grinning, savoring the scene. He’s a family guy, a businessman, a passionate racer and fan. He could be anyone, living anywhere. But Ronnie Mankins is my friend and neighbor. He’s a regular SGE reader and enjoys the interviews. But, since friends police each other, Ronnie called BS on my penchant for being the voice of Joe Toolbox on paper, while interviewing celebrities exclusively on this blog. Busted. I decided to oblige him. And as it turns out, he’s the perfect example of one of my favorite hypotheses: Listen to anyone for a few minutes and you’ll usually hear something that triggers insight into yourself, in the process. I didn’t need a very big stethoscope to discover what makes Ronnie tick…

Born and raised right here in Medford, Oregon, Ronnie has never lived anywhere else. We both grew up here (albeit several years apart), but we didn’t meet until about fifteen years ago. Ronnie's Mankins Motorsports company supplied race transporters to a lot of the big dogs on the circuit. But last year, the realities of the economy forced the restructuring of the business, and Ronnie took to buying and selling hot rods and parts to keep the jackals at bay. We cleared out space for two chairs amid the ever-changing overflow of speed parts in Ronnie’s garage, and got down to it. 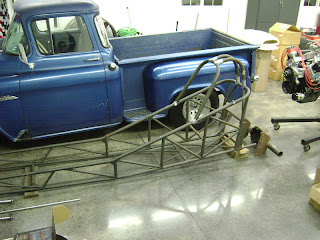 The scene of the interview: Ronnie’s garage. Dave Hix' Funny Car frame is being updated and shortened to accept a Fiat Topolino body for Altered duty.


Scotty: When I was a punk tyke in 1966, my cowgirl sister used to drag me along to your dad’s western wear store downtown, at least once a week. It was kind of a scene. Were you already into cars during that time? I was already hopelessly hooked, but you were even younger than me. 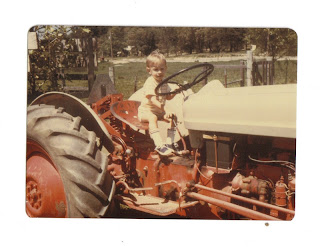 Experiencing Altered visions on Grandpa’s tractor. This poor kid never had a chance at normalcy.


Ronnie: “I’ve been into cars ever since I can remember. When I was five years old, my grandmother wrote a letter to Richard Petty on my behalf. He replied in writing and sent some photos and STP decals. I wish my grandmother had kept that letter! I still have the poster my grandparents brought back from the Daytona 500 that shows, three-wide: David Pearson, Richard Petty and A.J. Foyt. During that same period, my dad had a Sanger flat bottom boat that he special ordered from Larry “Schwaby” Schwabenland (he ran the Climax Blown Fuel Hydroplane) at Sanger Boats. That’s when I was bitten by the bug. I loved going fast with my dad in that boat!
When I was eight years old, my parents took me to my first drag race – the Winston Points Meet at Medford’s Jackson County Drag Strip. I’ll never forget it: The sights, sounds, and people – it was sensory overload! I got to meet Dave Uyehara, who was driving the Good, Bad and Ugly Top Fuel dragster then. I saw Ed “The Ace” McCulloch driving the Super Shops Funny Car, Raymond Beadle driving the Blue Max Funny Car, and so many others… I still have the photos of that race that I took with my Kodak camera.” 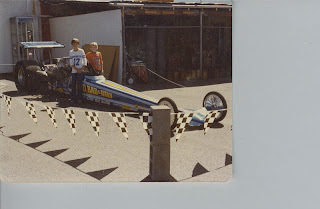 When chromemoly sorcerer Dave Uyahara brought his latest Fueler to Medford's Bizarre department store (now a Food-4-Less) for an appearance, Ronnie (left) and brother Randy were all over the photo op, and made a new friend.

SGE: Jeez, you had a killer holeshot on the racing microcosm, compared to most of us. When did you get your first car? When you were nine?


Ronnie: “No, I had to wait until I was twelve, before I started driving my dad’s truck in the country and around our family trailer business lot. And yes, it was a four speed. I’d built my own truck by the time I could legally drive to school, and it won the high school car show in 1985. I sold it to restore a ’72 K-5 Blazer – completely frame-off, with a lot of trick stuff done to it. At that time, I met Charlie Allin and Chris Plankenhorn – a couple of local speed freaks – and started a friendship that has lasted ever since. The first fast car I drove down the strip was Charlie’s Nova. During the 12 second pass I made, I decided what I wanted to do for the rest of my life.
I started shopping for a project and Frank Klustenbecker had a car for Charlie and I to look at. I’ll never forget that, either... Frank wasn’t home on the night we went to check it out, so all we could do was look through the garage door glass, with just enough light shining on what would be the next chapter of my life. I remember Charlie saying, in a real positive tone, “That’s the car!” It was a ’55 210 Chevy sedan. We built it and it eventually ran 9.71 at 137.”

Ronnie’s ’55 was infamous. Its legend lives on, though the car is now a Canadian citizen.

SGE: Klustenbecker? Ha! I always thought Frank’s last name was Clusterbreaker. Thanks for clearing that up. And that ’55 is no stranger to this blog. You guys did beautiful work on that – a total badass street/strip car. You, Charlie and Chris were running in fast company then, but how did you make the jump from fast street cars to the Altereds and Diggers you’re now known for shoeing?

Ronnie: “Just prior to my ’55 being finished at Allin Specialties, enter Gary Ryan and his Pure Adrenaline Altered. Gary’s a close friend. He brought the car up from South San Francisco to a nostalgia race in Medford. The night before the race, I was at dinner with Gary and he says, ‘Do you want to drive a real race car?’ I jumped in the car the next day. After Gary gave me full instruction, I made my first shakedown run – a 13 second shutoff pass. My second pass was 9.45 and the third was an 8.64. One month later, I licensed in my ’55 Chevy at Sacramento Raceway and later licensed in the Altered. I was really hooked by now…”

SGE: Man, I was so happy for you while that was happening. It all fell into place like it was meant to be. The story still makes me smile. And that was only the beginning… 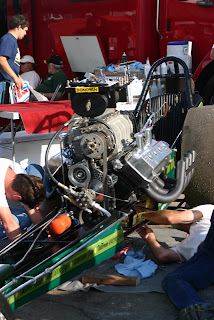 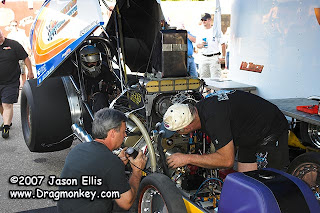 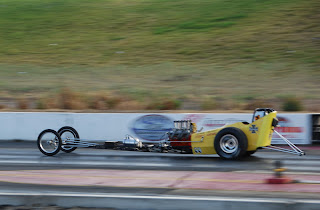 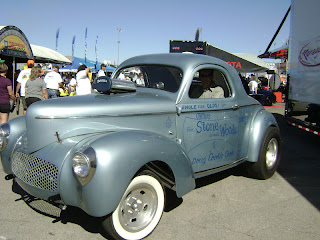 Ronnie worked for Renegade Coaches when they assisted Tony Thacker and the NHRA Museum with transporting several iconic cars from Las Vegas to L.A. Hey Ronnie, aren’t the cars supposed to be transported INSIDE the trailer? This one’s the real deal, kids. Ronnie’s cheeks are two of the few to dent “Cookie’s” office chair. 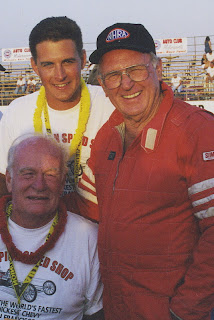 Jangle around enough dragstrips and you start making friends like these guys. Ronnie, hanging with personal heroes Jim McClennan (left) and Art Chrisman - the respective Drag Kings of northern and southern California.

SGE: I would think that crewing on those cars gave you some mechanical insight into them that pays off behind the butterflies at decision time.

Ronnie: “It was very educational. But also - well, I just can’t tell you how much fun that was, and is!”


Ronnie: “I have big dreams, but I need to find the money to get to that next level. I would love to upgrade my license to drive a Nostalgia Fuel Funny Car, or whatever may come along first. I’ll just say this: You won’t find anyone with more drive and heart!”

SGE: I’ll second that… So, given the chance, would you prefer to continue racing at the Nostalgia level, drive something in the Big Show, or what?

Ronnie: “I’d love to compete in the nostalgia nitro shows and transition to the Big Show, if opportunity knocks. If so, I’d prefer to drive a Funny Car, although I’d certainly give a dragster a shot.”

SGE: Like myself, you’ve had to close your business and hustle to survive. If or when the economy turns around, how would your life be different?

Ronnie: “That’s a great question. In a good economy, I think my chances would be better for race media relations and marketing, to further my opportunities as a driver. My past will only make me smarter for the future. I've been a business owner for over twelve years and my people and management skills are the glue that have kept it going, through these hard times.”

SGE: You have a deep-set respect and passion for racing history, especially locally. Where did that come from and what drives that passion today?

Ronnie: “I started drawing cars and dragsters when I was young. I was also building model cars and reading Cartoons magazine. I really enjoyed the old stories of how simple things were back in the day. A lot of people have paved the way for us to enjoy the hobby/sport we have today. I just think the history is important to know. It’s kind of like wanting to know about your family tree.” 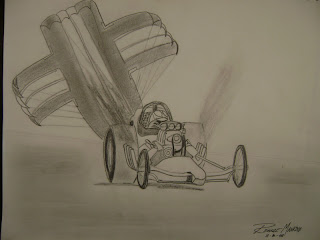 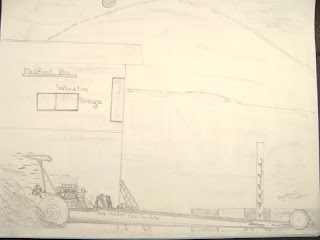 Grandma may have tossed Ronnie’s Richard Petty letter, but lots of artifacts remain. These are but a small sample of his pre-adolescent drawings. 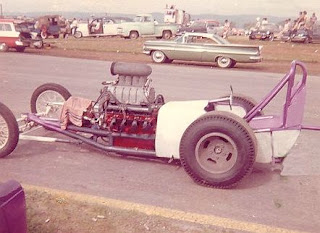 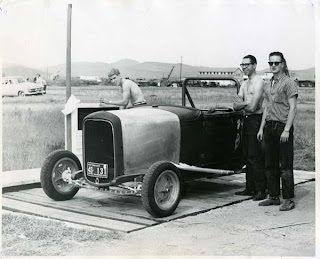 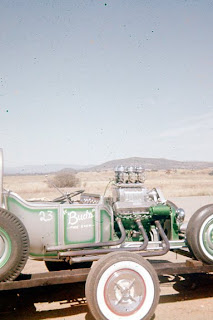 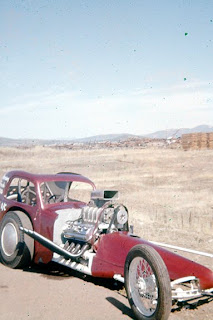 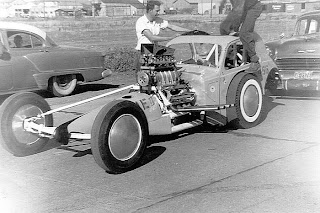 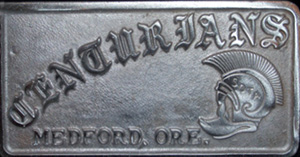 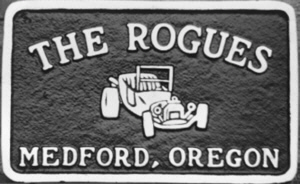 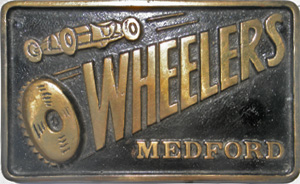 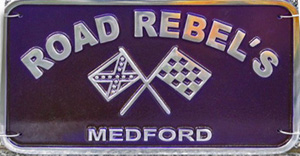 The photo collection fills the house and garage. This tiny sampling of Ronnie's massive local history documentation was shot at the White City Drag Strip, now known as Avenue G. Not many local clubs run plaques anymore, but they were mandatory equipment back then. Recognize your car or plaque?

SGE: Well, it’s embarrassing to admit this Ronnie, since I’m older than you, but I didn’t know half of the local hot rod history until you enlightened me. Thank you for that, and caring for these priceless photos and other artifacts that have completely taken over your house and your life. These are the roots of our little Rogue Valley family tree. May it continue to produce acorns like us, to terrorize the valley well into the future.


Ronnie: "Hey, thanks for the bandwidth on here. This was a lot of fun!"

Posted by Scotty Gosson at 7:03 PM No comments: