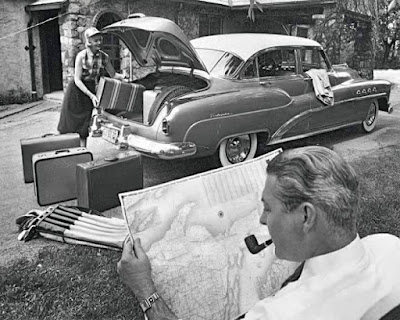 Tis the season. Summer is when the tires get rotated. But where shall we go?

For four years, our progress could only be measured in wobbly baby steps. Then, last week, the staggering suddenly delivered us to somewhere palpable: The SGE Model A project became mobile. We had ourselves a rolling chassis.

After decades of building and driving twitchy high-strung street/strip cars, I was overdue for a relaxing gas sipper that I could drive cross-country in relative comfort, with confidence. The proposed vehicle would, by necessity, be a low-buck beater, built largely from other's cast-off parts. The chassis and body components were gathered in 1997, then stored in a field at my best friend's rural property. For fourteen years. That friend, James "Jamie" Ford (better known as Dr. Lockjaw), began clearing scrap metal from his farm in 2011 and found my dream car buried in the weeds. He could have cashed-in at the scrapyard, but instead offered the use of his Custom Metal hot rod fabrication emporium to build the car. That generous gesture stops short of explaining why Dr. Lockjaw is the best friend anyone ever had, but it does illustrate his character. Doc is one of the good guys.

Today, the chassis is about 95% complete, and it rolls around. Okay, it wobbles along. My first thought: Where to? I've been itching to rattle down the road in this thing since 1997, but hadn't considered where the maiden voyage might lead to. That question was answered by an unexpected source, as usual. Join us now for the first miles of what will hopefully be a long and wondrous journey. 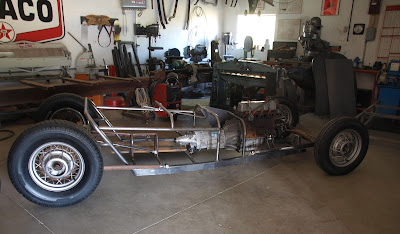 When we turned off the lights at Custom Metal last week, I took one last shot of the roller on my way out. The pile of tubing I refer to as a '31 Ford Sport Touring wasted valuable space in the shop all week. Doc needs it gone, so he can commence work on his next top secret project (which I cannot reveal, due to a signed and notarized gag order). 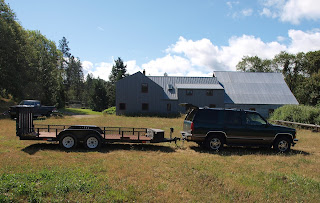 This Tuesday morning, fellow hot rod crazy Allen Stewart arrived at Custom Metal in a Chevy Tahoe (basically an altered wheelbase Suburban), pulling a 16' trailer. Allen knew of my plight (I had nowhere to put the car), and offered a storage spot on his property. 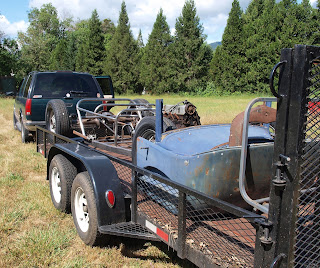 It didn't take us all day to load my rusty scrap metal on the trailer. Note '39 Ford trailer light. Stylin'! 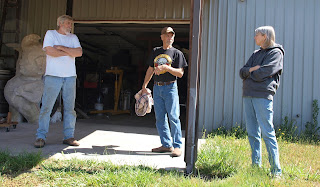 (L-R: Doc, Allen, and Linda [Mrs. Doc]) We've been saying hellos and goodbyes for nearly twenty years now, but this one felt different. It seems the Model A project had become our common denominator, and now it was gone... 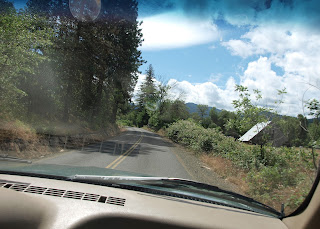 ... as were Allen and I. The Tahoe ride to Allen's was akin to driving a sumptuous couch down the road. 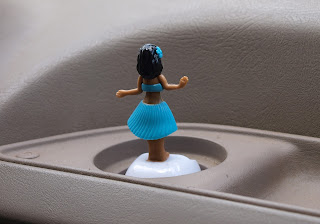 Air conditioning, music on the stereo, and dancing girls! My friends spoil me so... 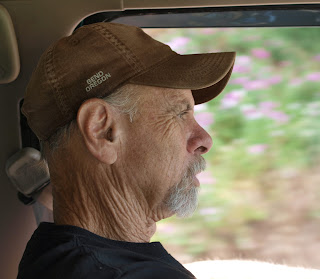 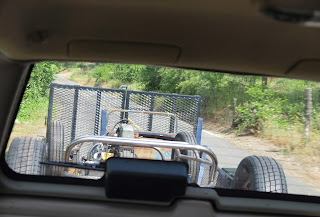 ... but my focus was really on the Model A's first drive. It handled the corners surprisingly well (considering it has no shocks), got incredible mileage, and was whisper quiet. I couldn't help but wonder what kind of godforsaken shithole it's new home might be. I braced for the worst... 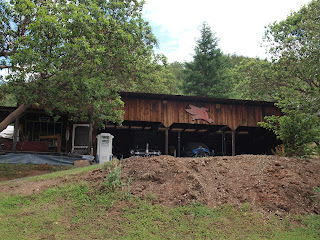 ...and was stunned when Allen waved a finger at this structure and growled, "There it is." I instantly released 35 psi of stress. It has a roof! 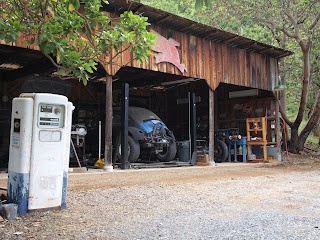 Up close and personal, the rustic open-faced lodge in the woods was indeed very inviting. We grunted the chassis off of the trailer and wrestled it uphill to the shop, through mud and gravel. (Note to self: Install and adjust steering stops). 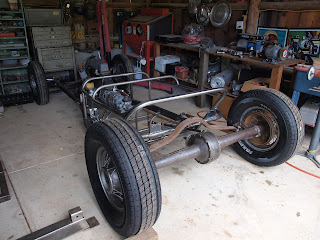 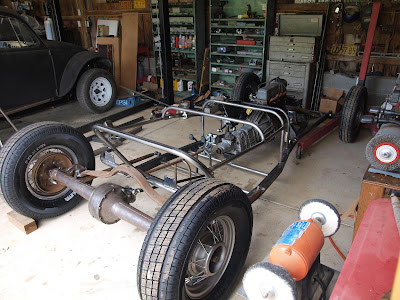 Home sweet home. And what a swanky joint! Allen granted me access to the blast cabinet, solvent tank, hydraulic press, welder, and air compressor. Didn't see that coming! Room mates (left) include an under-construction hot rod Baja Bug, and a '65 Mustang coupe in mid-resto. To the left of those guys is a luxurious office, fully stocked with Allen's lifetime collection of car magazines, and a working refrigerator. I guess the A-bone and I can tough it out here until we find permanent shelter. Thanks, Allen! 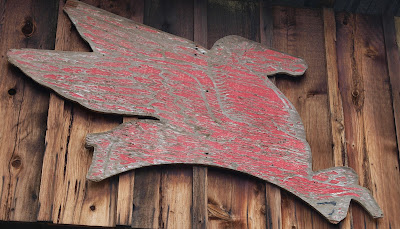 If you need me for anything, just look under the Mobile Pegasus. I'm planning on some quality time there this summer. Happy motoring! 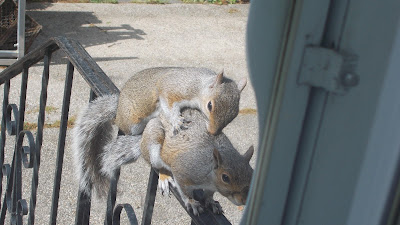 MUST PROVIDE VALID PROOF OF AGE TO VIEW THIS IMAGE. Meet Bob and Fluffy. Motormouth Ray's pals Honda John and Karen caught this fuzzy couple getting mobile on their front porch. Direct application of high pressure spray from the garden hose had no effect on the daring thrill seekers, proving once again that when fully engaged in a moment of zen, the rest of the world does not exist. The very definition of a loving reality slap. (Photo courtesy of Honda John via Motormouth Ray) 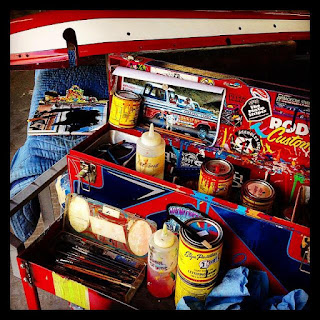 Master builder Dave Shuten dusted off his striping box last week at Galpin Ford and proceeded to lavish stripes on every immobile object in sight. Once thoroughly warmed up, Shuten caught his breath (and this shot), then continued the tagfest on a customer car. Is there anything this guy can't do at the highest level? (Photo courtesy of Dave Shuten)

Hardcore readers may recall this 2014 image of Allen Stewart at a Stray Cats car club gathering in Jacksonville, Oregon. He had been hit with cancer as if delivered with a scatter gun, and I was amazed to see him up on two feet. He's doing even better today - a walking miracle. Good grin stuff! (Scotty shot) 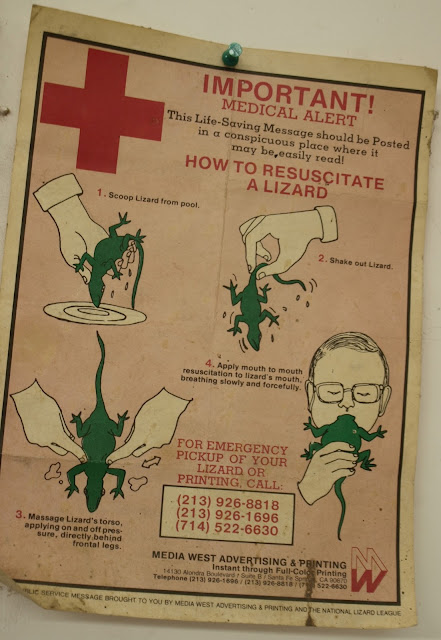 Bonus grin: An extra special THANK YOU to Dr. and Mrs. Lockjaw for hosting four continuous years of my nonsense at Custom Metal. They could have spent the last 208 Sundays doing something enjoyable or productive, rather than patiently answering my 6,738th iteration of, "What drawer does this go in?". They even fed me 208 lunches. During twenty years of (often awkward) growth steps, they have accepted me for who I was at every juncture, and never judged my missteps. Most importantly, they have inspired me to practice that ethic in all of my affairs. Their property is crawling with cool little lizards, so the above OSHA-mandated sign on the Custom Metal shop wall will always represent Jamie and Linda Ford in my mind's eye. They have my eternal gratitude. (Scotty shot)

Posted by Scotty Gosson at 12:23 AM No comments: