TREASURES OF THE ATLANTIC EXPOSED! 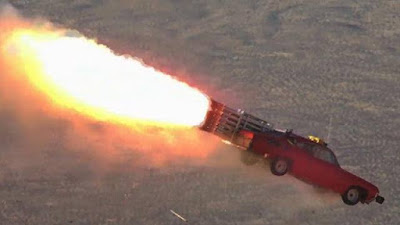 Lest you become bored with the same old same old, we set the SGEmobile's locatometer on East, and set out to capture some fresh content for you. 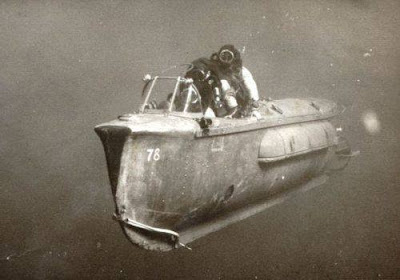 There's no limit to the depths we will dig. The Atlantic was warmer than expected, so we put the top down. Nice. 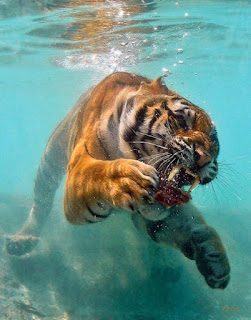 We found some surprising sights down there that had us considering rolling up the windows. 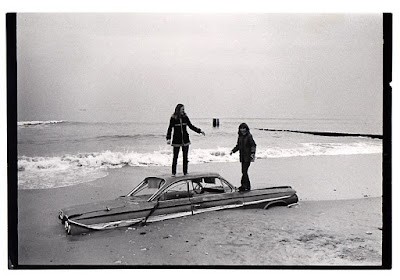 After a few hours of fruitless hunting, we surfaced for a breath of fresh air and sure enough, there were more cars on land, so that's where we stayed until snagging some hot rod imagery for the blog. The first thing we noticed about East Coast cars is they tend to rust. Luckily, this victim was just a late-model hardtop, but you wouldn't want to subject your vintage tin to these elements. Gack!


SGE East Coast correspondent Motormouth Ray has been on assignment. Okay, he's been on vacation. When last we spoke, he was savoring a fine cigar at poolside on his palatial estate in the Hamptons. The pool boy was fanning him with palm leaves. That was Ray's entire itinerary for the day (though he was considering a possible ice cream treat for that evening). Meanwhile, I took a minute from my latest book project and sniffed out a couple of East Coast gems to share with you. Admittedly, I'm no Motormouth Ray, but I'm all you have this week.


Just in case you haven't seen it everywhere else on the 'net, here's a peek at a killer barn find by a rodder known only as "Chris", from "somewhere in New York". You can't blame Chris for the paranoia. We'd be nervous too. Pants-peeing giddy, but wary. 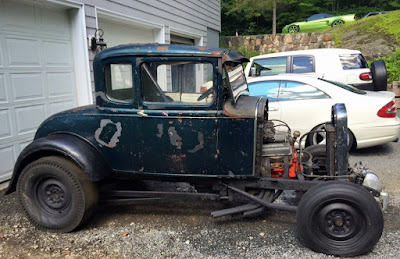 Chris is mum on the details, but the photos tell the tale vividly. The ex-drag late-Model A obviously has a sordid East Coast past. Note vintage tin spy rolling past Chris' place in background (in green Chevrolet). These guys are incorrigible. 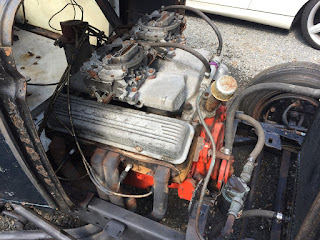 As found, the A-bone carried this crossram 327 with minimal cooling system and maximum fuel system. The engine alone is a rolling history lesson. 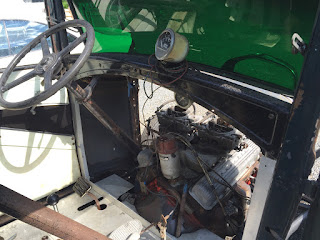 Just be conscious of keeping your toes off the Vertex sparkler. For safety's sake, interior is well ventilated (that's a non-serious joke). 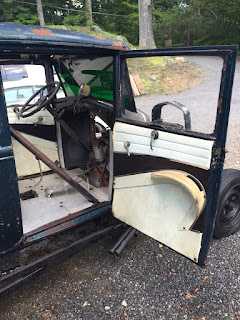 Pretty swanky digs. Can you identify these door panels and arm rests? 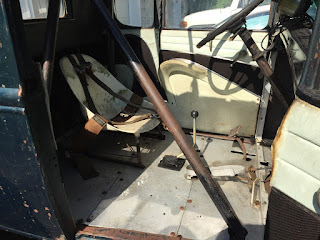 Office is well stocked with safety equipment. Slot in floor appears to be for clutch pedal that was removed at some point. Plastic patio chair is well braced. Etcetera. 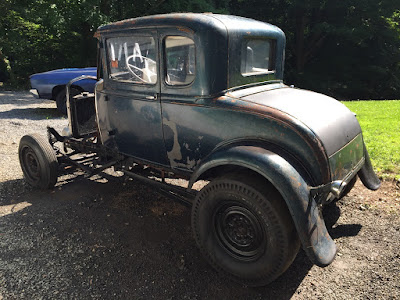 Parting shot. Note late-model muscle in background. Chris might want to consider enrolling both of these cars in the Witness Protection Program. BREAKING: Chris has connected with the son of the original owner-builder, and is taking inventory of many previously missing parts. Updates as they develop. (Photos courtesy of "Chris")

Just a few miles south of Chris' place, we happened on the world premier of Craig Clements' "Headhunter" show rod, in Tampa, Florida. 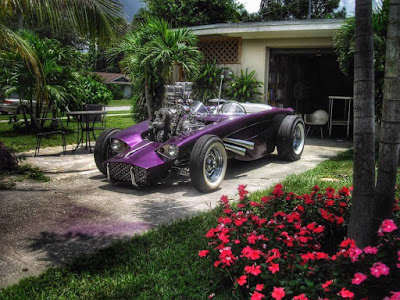 The Headhunter is so purple, it throws its purple reflection on the course concrete driveway. Could that chair in the garage be a match for Chris' missing Model A unit? For you large scale builders, the house is a '54. 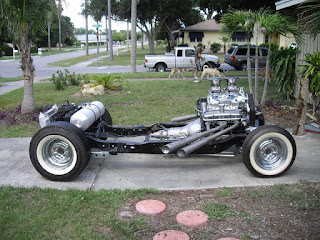 Clements conjured this roller from a "heavily modified" 1990 S-10 Blazer chassis (it had the 100" wheelbase he wanted). He fabbed a rear coilover setup, and adapted dune buggy rack and pinion steering. 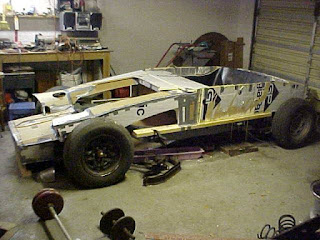 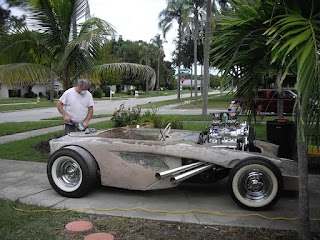 Craig whipped up the body in Fritz Schenck fashion, which is basically Ed Roth-style, with just a dash of Ray Farhner's "X-Ray" sprinkled in. 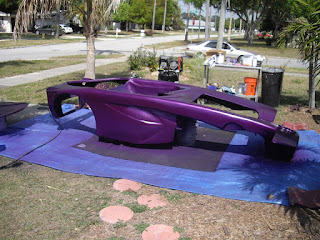 Craig on the home spray: "Paint booths are over rated. I told my wife the over-spray would wash off the driveway, but it's still visible, after two years of baking in the sun. That sho' 'nuff be some tough paint!" 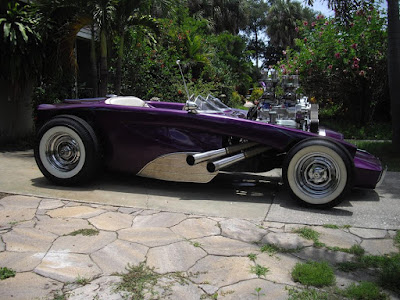 Clements' famous last words: "Just goes to show what can be done in a small garage, your backyard, and driveway." Amen to that. Clements credits Dwight Wallace for his loyal assistance on the build.  (Photos courtesy of Craig Clements)

This week on CHASING THE O'BRIENS: After dipping their toes in the Atlantic, America's most beloved tribe is now aimed back at the Pacific. They have obviously thrown the map out the window, so we can only try to follow along. Buckle up... 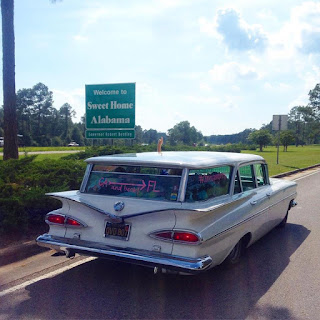 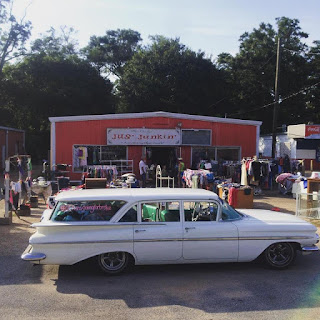 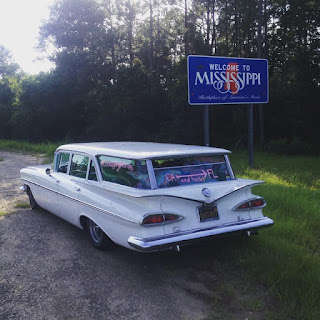 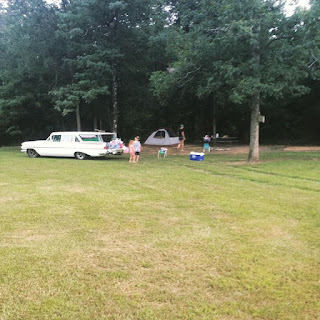 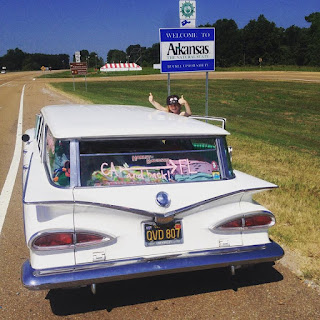 Arkansas! Apparently Cormac's favorite state that starts with an "A". 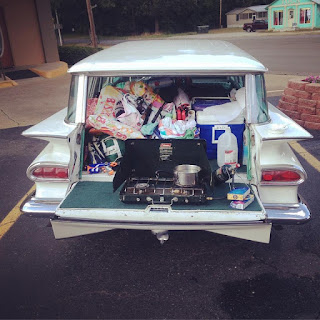 Arkansas motel parking lot! The O'Briens got a room, but decided to tailgate for dinner. 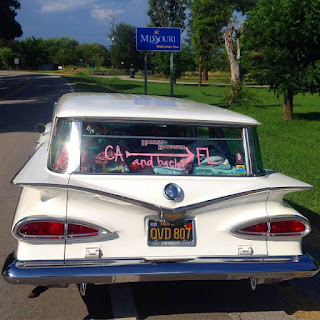 Missouri! "Easier to spell than Missisiippee!" Next week: The final push to the Golden Gate. 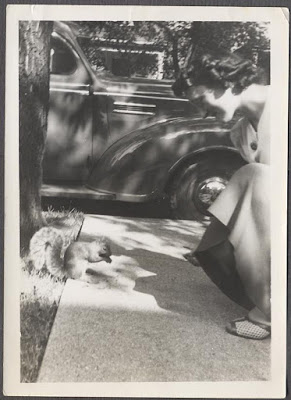 This image has been decaying in the squirrel vault since 1944, so we figured it's about time to air it out. You're welcome. 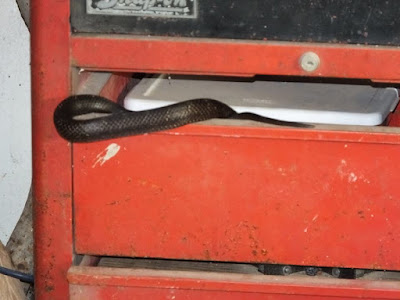 Mikey Meyers found this blacksnake in his SnapOn rollaway last week. That prompted a frantic search for his snake removal tool, which resulted in precious little work getting done in his Utah shop that morning. We're just grateful that Mikey had the presence of mind to snap this photo and send it in. Thanks, Mikey! Now get back to work. (Photo courtesy of Mikey Meyers)

Recent polls indicate a whopping 87% of SGE readers prefer Holley carburetors. So we conclude our East Coast presentation with a lesson in alternate carburetion from an alternate marque on an alternate coastline, courtesy of alternate East Coast Tech Editor Motormouth Ray (before he went on vacation).

The "Quadrajet Madness" Cutlass has a lot of thirsty cubic inches to irrigate. What's a GM stalwart to do? 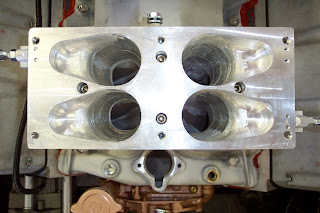 First, get out in the shop and fab up a carb adapter for your factory cast aluminum dual quad intake manifold. 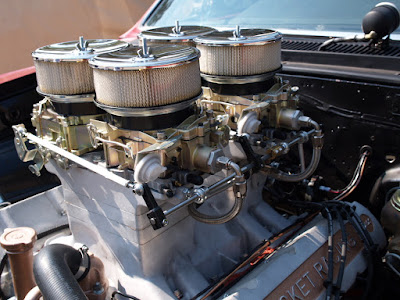 Then bolt up your quad quads and plumb a firehose fuel line to the junction block. Madness, indeed. How does it work? Ray promised to provide test results, then we both got busy, and forgot about the whole thing. We may never know. I'll try to remember to ask him about it. (Photos courtesy of Motormouth Ray)