It's been quiet around the blogsite lately. Too quiet... I'm thrashing like a mad fiend to make the deadline for "Rat Rods - Rodding's Imperfect Stepchildren" (for CarTech) and there hasn't been much time for anything else. So last weekend, I made some time to cleanse my palette and had some fun in the process.

One of my current independent book projects is "Racing to America" (working title), about overseas racers who come to run in the U.S. in a variety of motorsports. One of those niches is drifting. I connected with Sarah and Adam Burgess, Aussie drag racers who caught drift fever and are taking aim at the U.S. circuit this year. I've seen snippets of drift footage on TV and Youtube, but had yet to see this spectacle in person. So when I got word of a small local grassroots drift, it seemed like a great place to start my education. I was right.

The event was staged in the local fairgrounds parking lot. About 30 entries drew about 30 spectators, counting me. I arrived to find this day of the event (Saturday) was for testing, learning and generally jangling with friends and family. Things would get serious on Sunday, when competition commenced. Hanging at a local car event and not knowing anyone was a refreshing and surreal experience. Until I ran into Phil and Melissa Shreeve, casual acquaintances to me, who I had no clue were interested in cars at all. They had come to watch son Justin run, which is rare, as he's usually too busy videoing events for his Tandem of Die company (originally dubbed 'Tandem OR Die', they liked the quirkyness of the typo better). Now that I had an 'in' with some experts, I took full advantage and actually learned a bit about the subject. Phil and Melissa always struck me as nice folks and now I was really impressed with Justin - who went out of his way to make me feel welcome and insuring that I got a full access pass and the whole rock star treatment. I really like these guys. And I instantly dug the drifters - my new poster boys for grassroots motorsports, hanging it all out there for a rush and a grin. I just hope they haven't ruined Sarah Burgess and the pro corporate-level XDC Drift events for me. 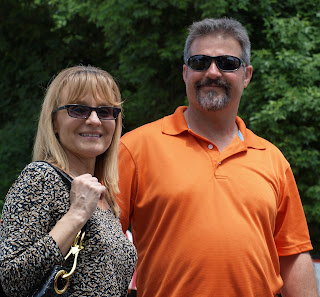 My hosts for the day, Phil and Melissa Shreeve. 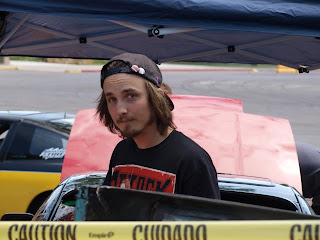 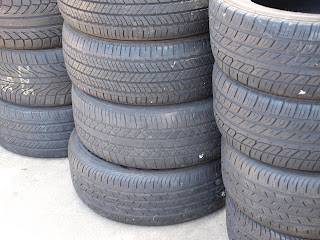 These guys go through a thousand bucks worth of rubber faster than a cat can lick his ass with his tongue out and his tail up. Tire dealers are highly coveted sponsors. 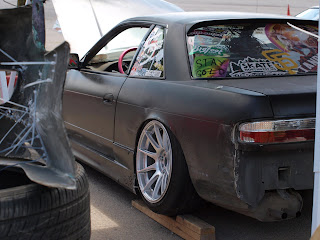 Justin's Nissan is driven hard and put up wet, like every car there. He says the independent rear works "just fine" for drifting. These guys don't let anything get in their way - check the zip ties holding the glass nose together in foreground. Typical. This was shot while Justin helped with a front clip swap in the next pit over. 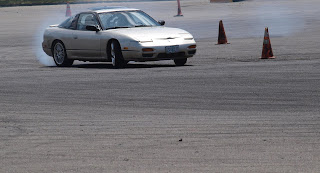 The lions share of cars at this grassroots level are daily drivers, with Nissan 240SX's being the weapon of choice for most competitors. Passengers are encouraged ("It's more fun, having someone to scare") and only a helmet is required. 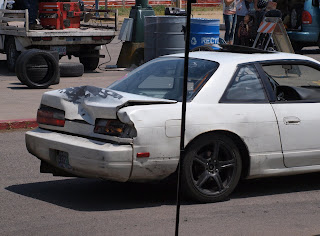 Did I mention the Banzai mentality of these guys? Bumping into stuff (like each other) is the nature of the beast. No wonder this was such a rage on Tokyo streets - those guys were doing this to $10,000 paint jobs in drifting's infancy. 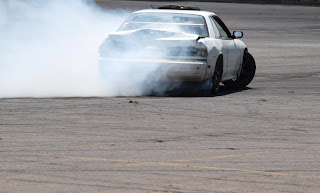 The sheetmetal may no longer be beautiful (in the conventional sense), but it still drifts like a figure skater chasing gold at the Olympics. 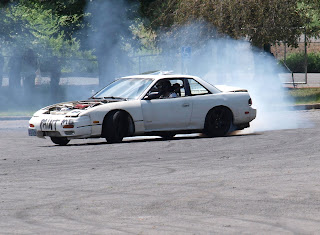 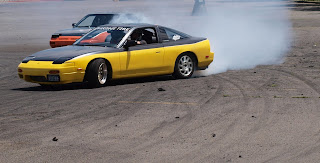 After a day of this, I'm now a desciple of the Tandem of Die cult. Since this was just a practice day, I got to see as many as four cars at a time on the track, drifting only inches apart. Shouldn't NASCAR require a drift section on every track? 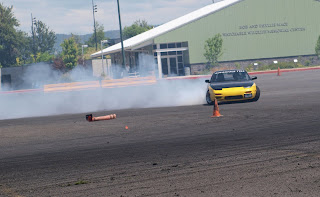 I turned and snapped one last image on my way out. Then it was back to work for the man. But it was fun playing hookey for a while and I even learned something. Bonus. Thanks Phil, Melissa and Justin!

Posted by Scotty Gosson at 1:20 PM No comments: