The following is an observation, kind of an editorial, and perhaps a bit of a parable. It is not presented here for your amusement. I wrote it only because my muse threatened to abandon me if I didn't do it. - Scotty 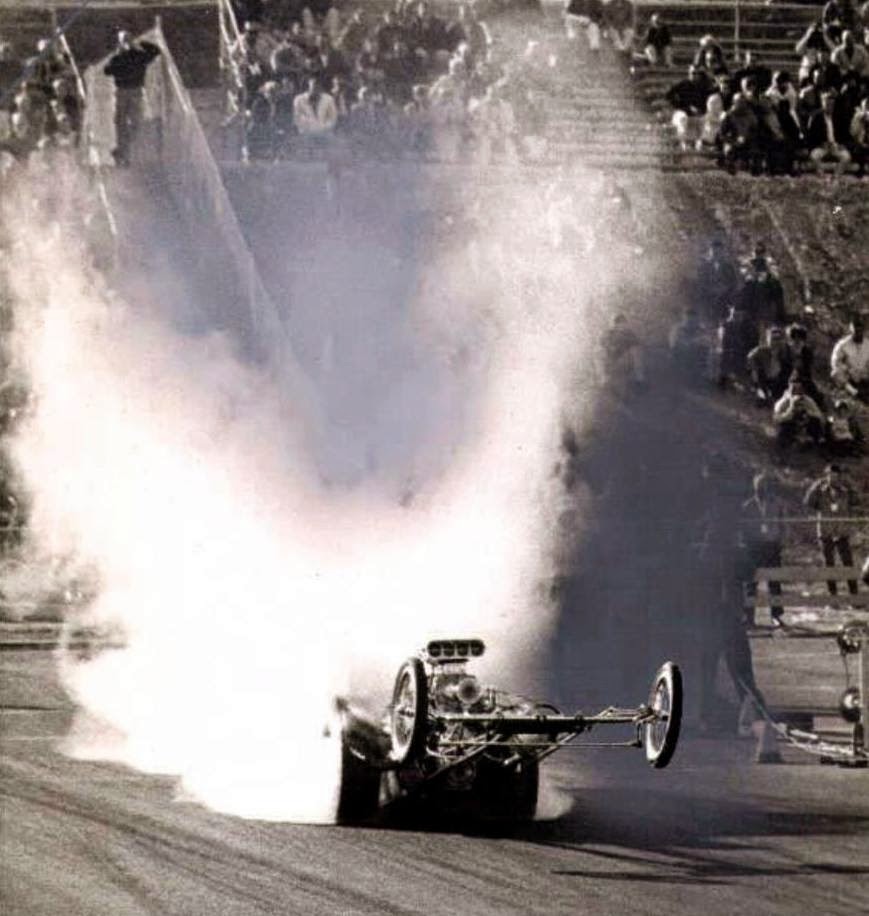 The majesty of AA/FD has not been matched in our lifetimes. But that doesn't mean it can't happen.

This isn't about X-Ray glasses. It's about reality as perceived by two dynamic individuals (whom I've never met) that have been toiling in separate solitude for years toward equally inspired goals of running Sixties-style fuel dragsters under present day circumstances. Both men possess mechanical skillsets, intellect, and drive far beyond my own (which isn't saying much). Yet I intuitively sensed a shared bond upon discovering them online, several years ago. The common denominator was our love of mechanical theater. The surrealism conjured by beautifully crafted machinery operating at the crest of annihilation. Equally as powerful as the chemical mix and sensory assault is the base human response to action. Concepts and theories may be intriguing, even exciting, but action equals reality. You wouldn't know it by our behavior, but we humans crave reality - more than ever in this golden age of escapist society (which reads friendlier than "denial" or "fear of reality").

The truer reality is rarely consciously recognized and is largely dismissed: Like the wind that blows across the track, we tend to only acknowledge it with plans to navigate around it. It's a rare day that we consider how screwed we'd be without the wind. We can't see it, yet we can't deny the proof of its existence. And so it is with the unseen-but-oh-so-real contagion of energy expended by goal oriented humans. My hypothesis: Honest emotion in action is just as real and powerful as the wind.

Subject A: A west coast artist and motorcycle builder, who also does cars and considers dragsters to be kinetic art. A five minute phone call five years ago transformed us into instant brothers (consider him the better looking sibling). (Photo courtesy of Subject A)

Subject B: A professional east coast race car driver and builder, who considers dragsters the essence of racing. Besides their shared experience and quest, the photos reveal an uncanny physical resemblance, as well. Coincidence? I don't believe in that. (Photo courtesy of Subject B)

I observed both subjects for a number of years before it finally occurred to me to connect the two last week, via Facebook. Where it goes from there is none of my business. At once so different and so alike, they might consider each other to be crackpots. My intuition was to introduce them and step out of the way. My hope is that they'll team up to give the status quo a one-two kick to the nuts, and reinvent drag racing in the process. My suspicion is that both parties are open to the possibilities of a mutual energy exchange. But I have no expectations. Anything could happen. Neither party is yet aware of this experiment. I'll observe both subjects and report the developments here. Meanwhile, I feel creepy about conducting secret experiments on the unsuspecting. But the data must be as pure as the wind to be of value. Perceived reality won't cut it in real world testing.
* 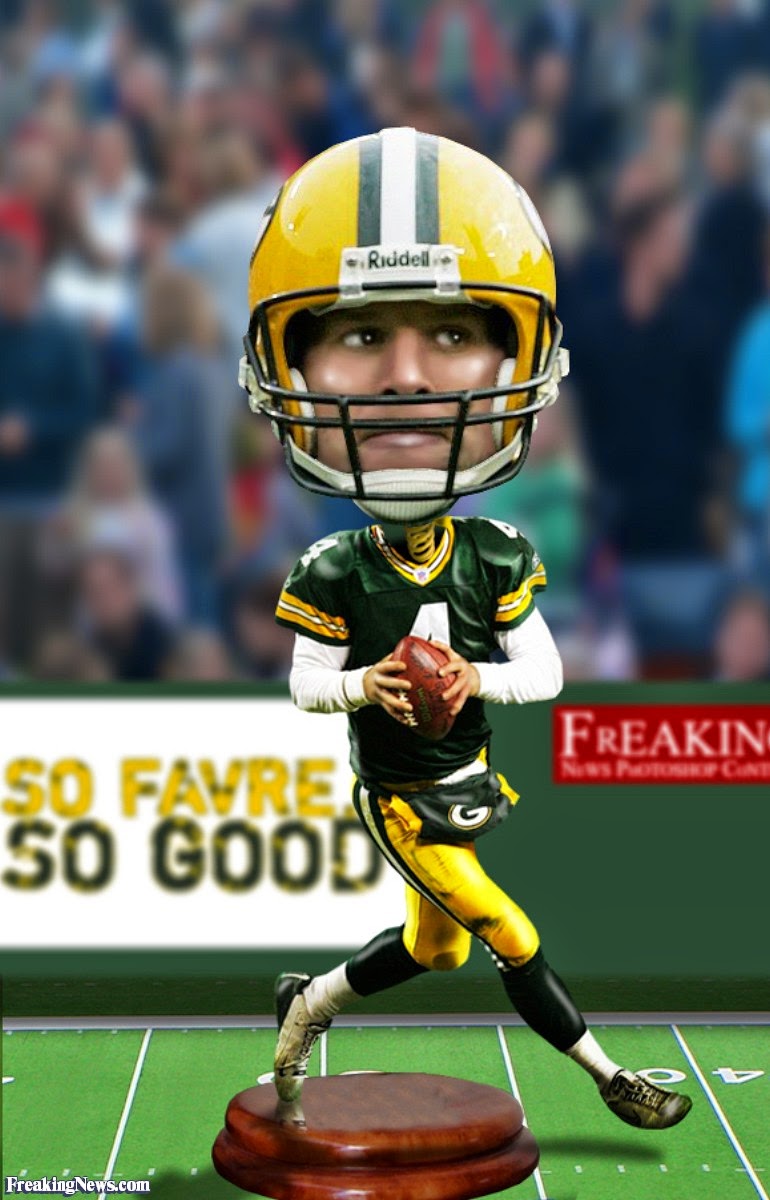 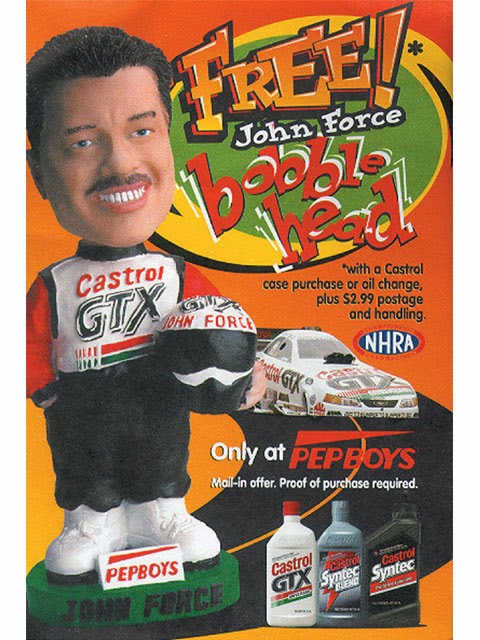 Perceived reality: Brett Favre and John Force are as disparate as fish and bicycles. True reality: There's a reason these two have never been spotted together. They're basically the same person. Both have amassed  unprecedented fan bases, due to their purity of passion. Love 'em or hate 'em, no two figures in sports history have displayed such giddy love for their craft and ridden it to such high levels of success. Their aim is true. True reality #2: It's no coincidence that Force's bobble head bears such a resemblance to Austin Coil.


While I was busy with my little experiment, Motormouth Ray was unwittingly stumbling across one that he had initiated years earlier. It's still bearing sweet fruit today. Take it, Ray... 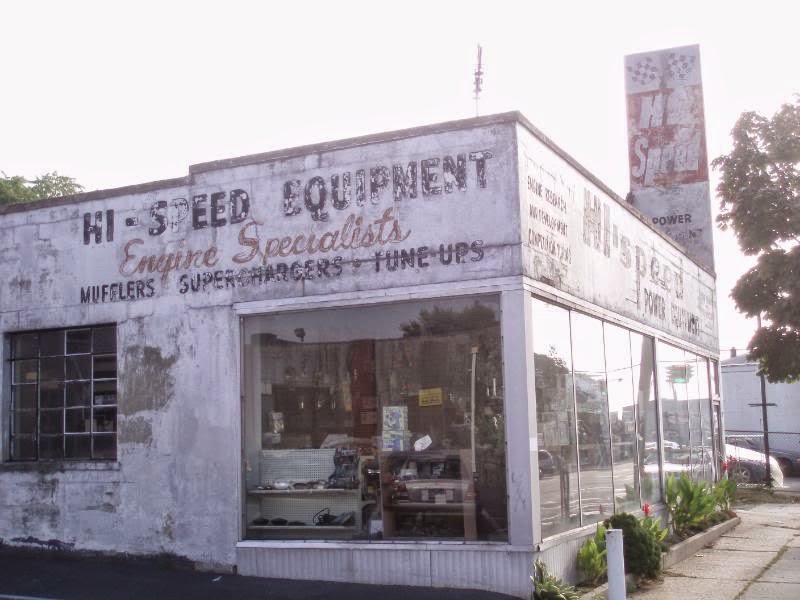 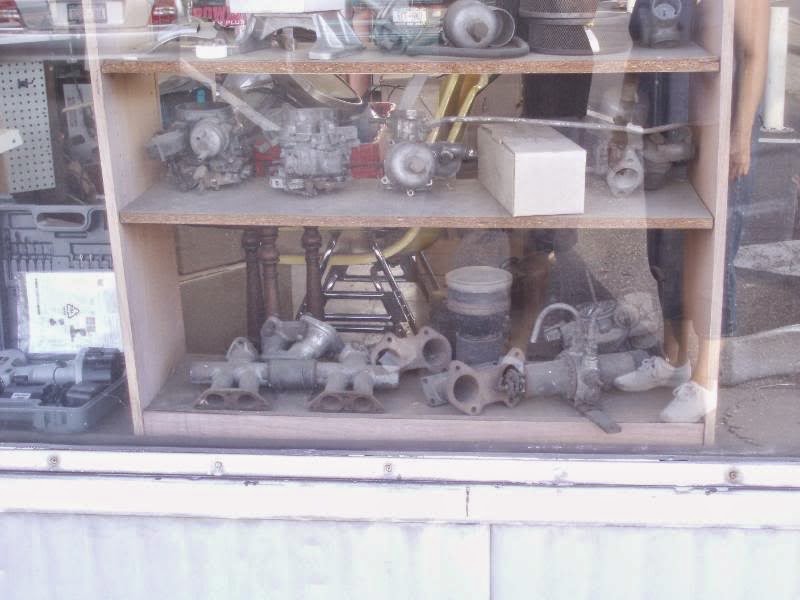 There was a very popular speed shop in Valley Stream Long Island (one town over from us) that I used to go to when I was in high school. The name of the shop was Hi-Speed Equipment, and the owner was a very wise and crafty man named Frank Dominianni. I just went there to buy small items, because I couldn't afford his knowledge of early Corvette fuel injection systems, nor a pull on his Clayton dyno. 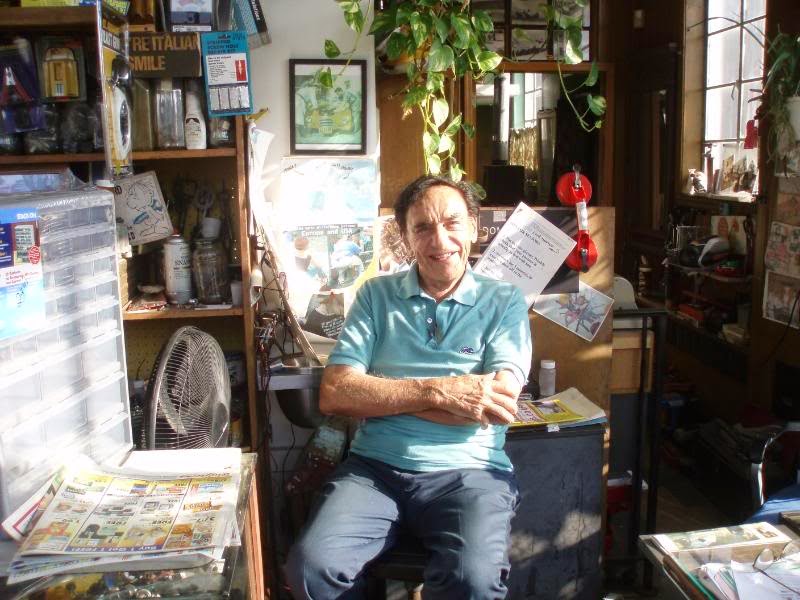 Fast forward to 2005, when I happened to see the front door of the dilapidated shop open. I wondered if it was being sold or emptied, as it hadn't been a working shop in many years. I walked over and immediately recognized the notably older Frank, sitting behind the desk. Cut to the chase: Frank had kept the shop and went there every day - rain or shine - just to keep a schedule. We became fast friends, and had many deep conversations about life, love, and the state of the world at large. We shared some deep mother issues.

We had Frank on the show once, in 2005 (see link on the Motor Mouth Radio home page), but I was never able to coerce him to come on again, due to his shyness. Frank passed away a few years ago, but his son Joe regularly sends me tidbits he finds while going through the contents of Frank's life (and he saved everything!). I could give you volumes of information on this iconic racer/fabricator/mechanic, but we'll get to that later. For now, I want to share with you a document that Frank received in 1963 and filed away. This is cool stuff... 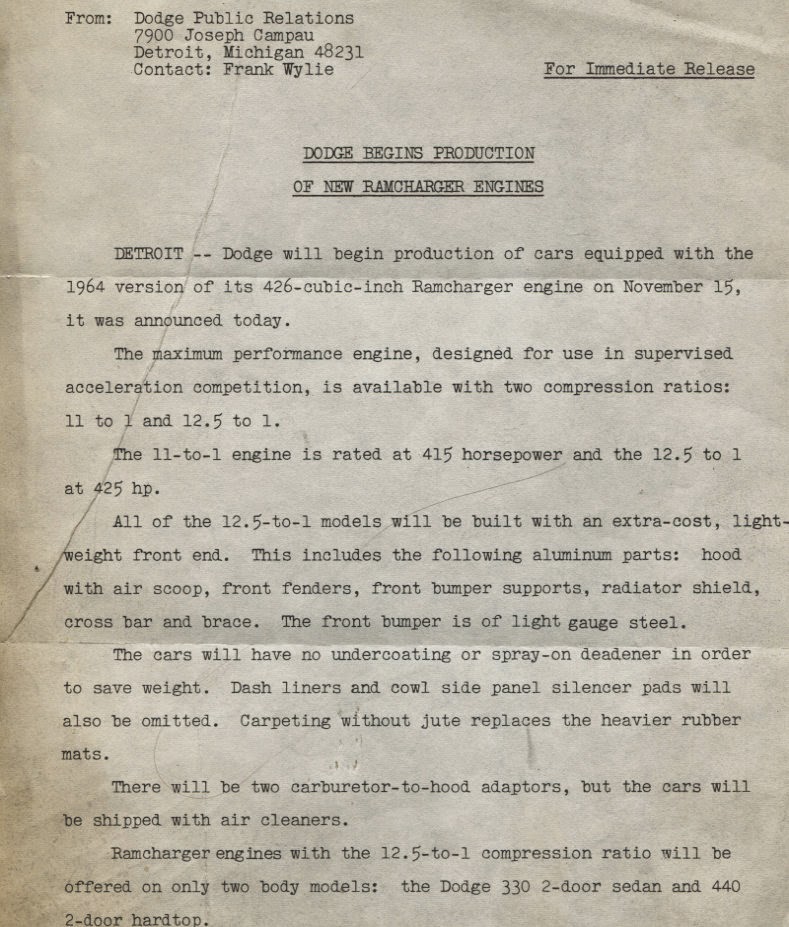 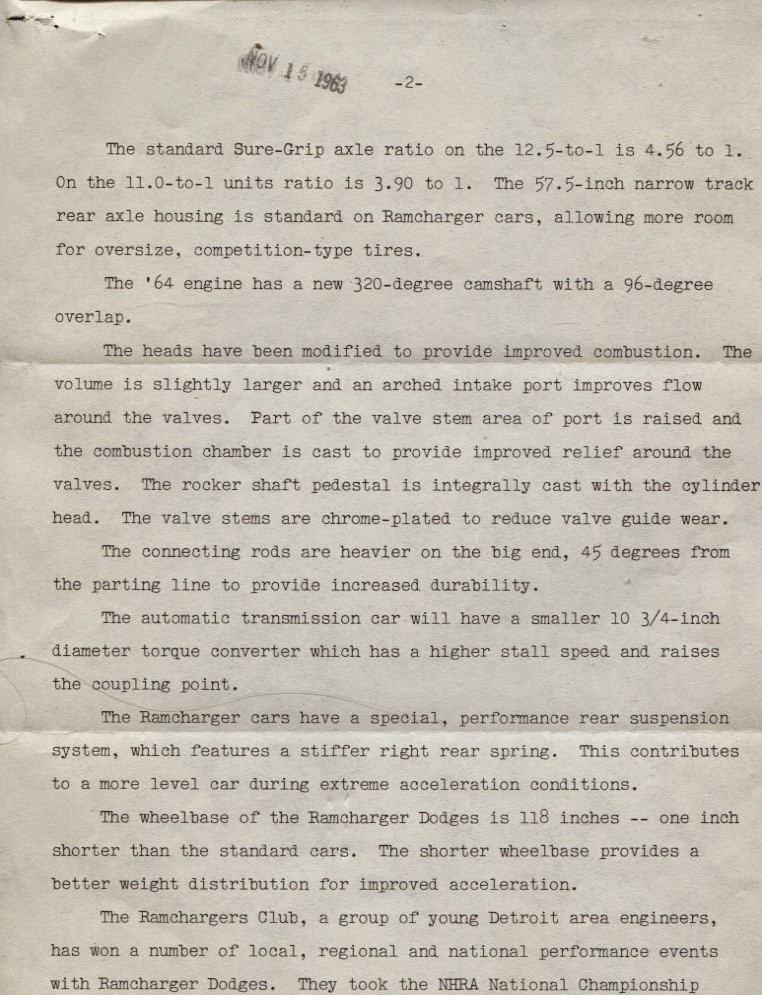 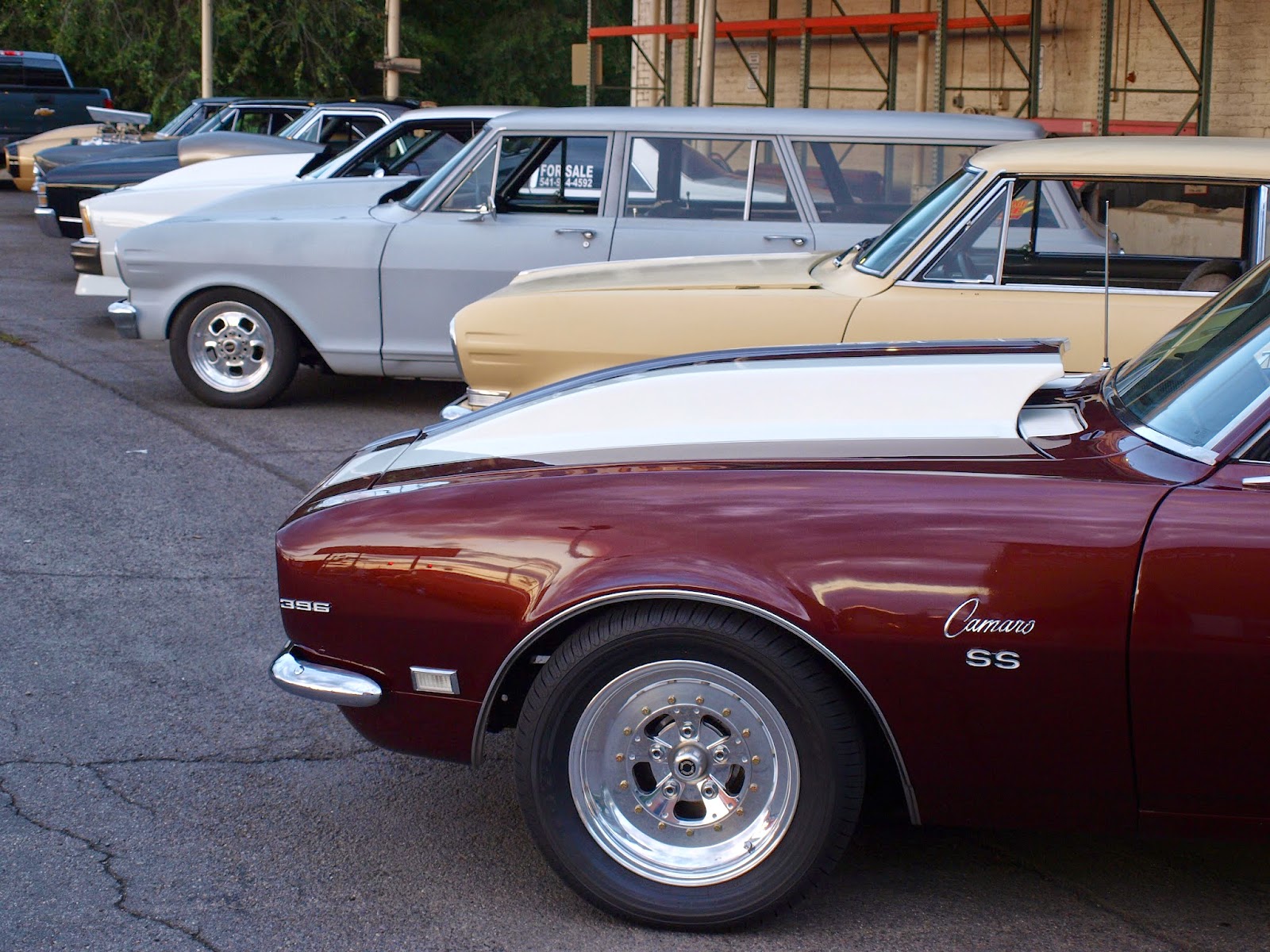 Testosterone was abundant last Thursday night at the little pawn shop around the corner from SGE Headquarters. So I scurried over to see what the window rattling was all about. 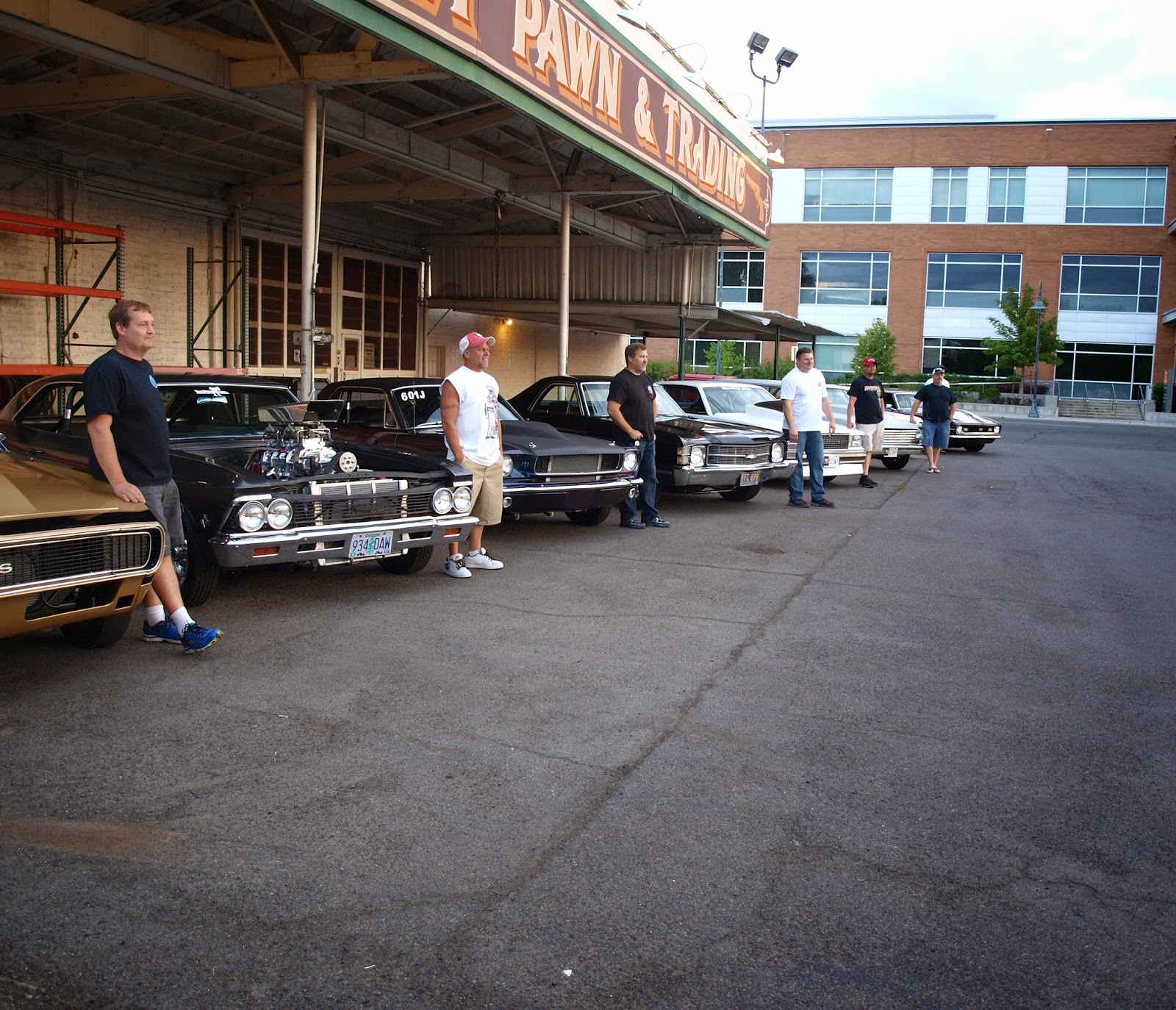 Rare gathering of the heaviest hitters in the valley. Each of these cars have been rubbed on at Allin Specialties (where I worked for a while). That's proprietor/horsepower whisperer Charlie Allin, in front of the black El Camino. Clean and mean is his signature. 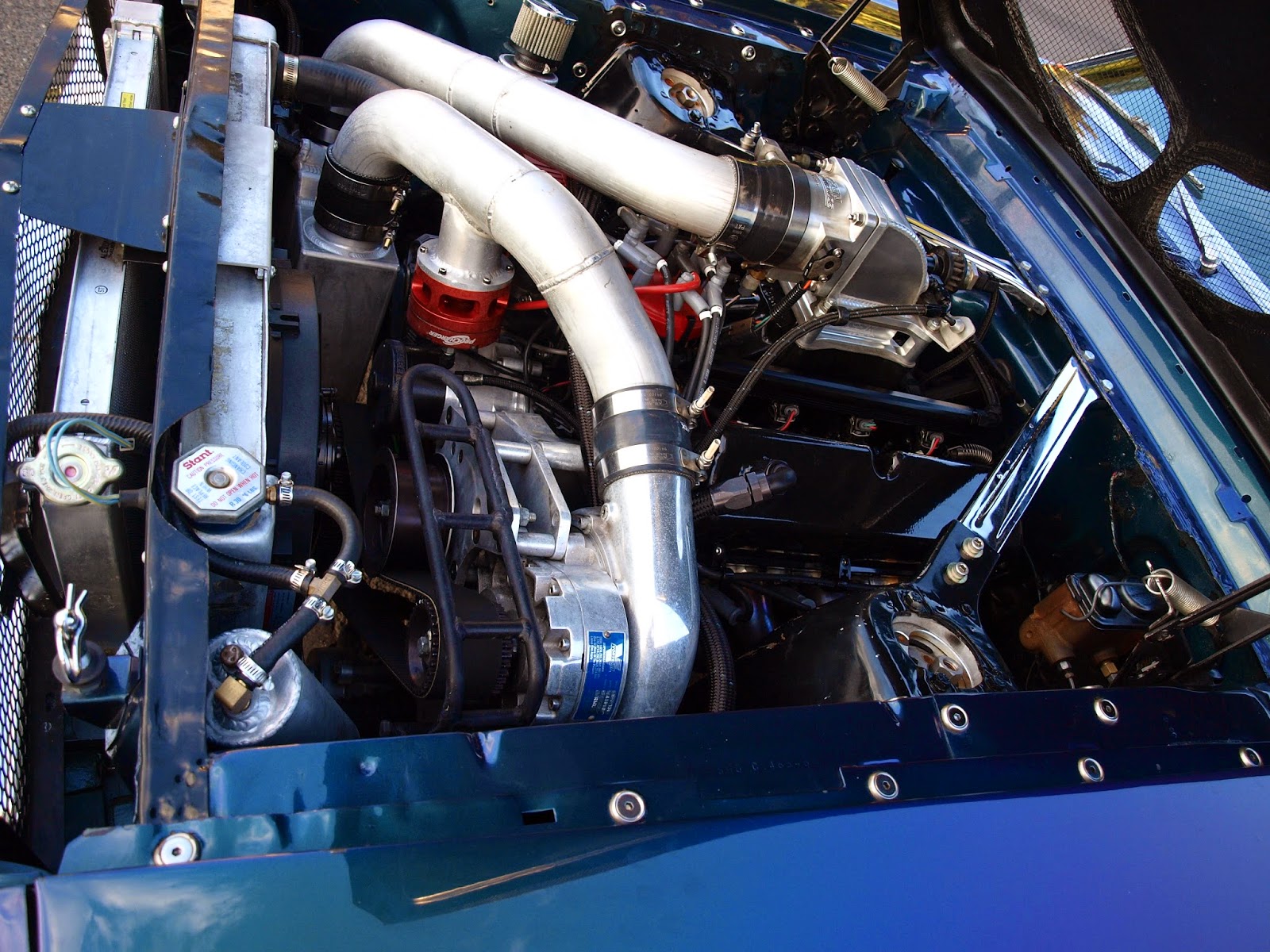 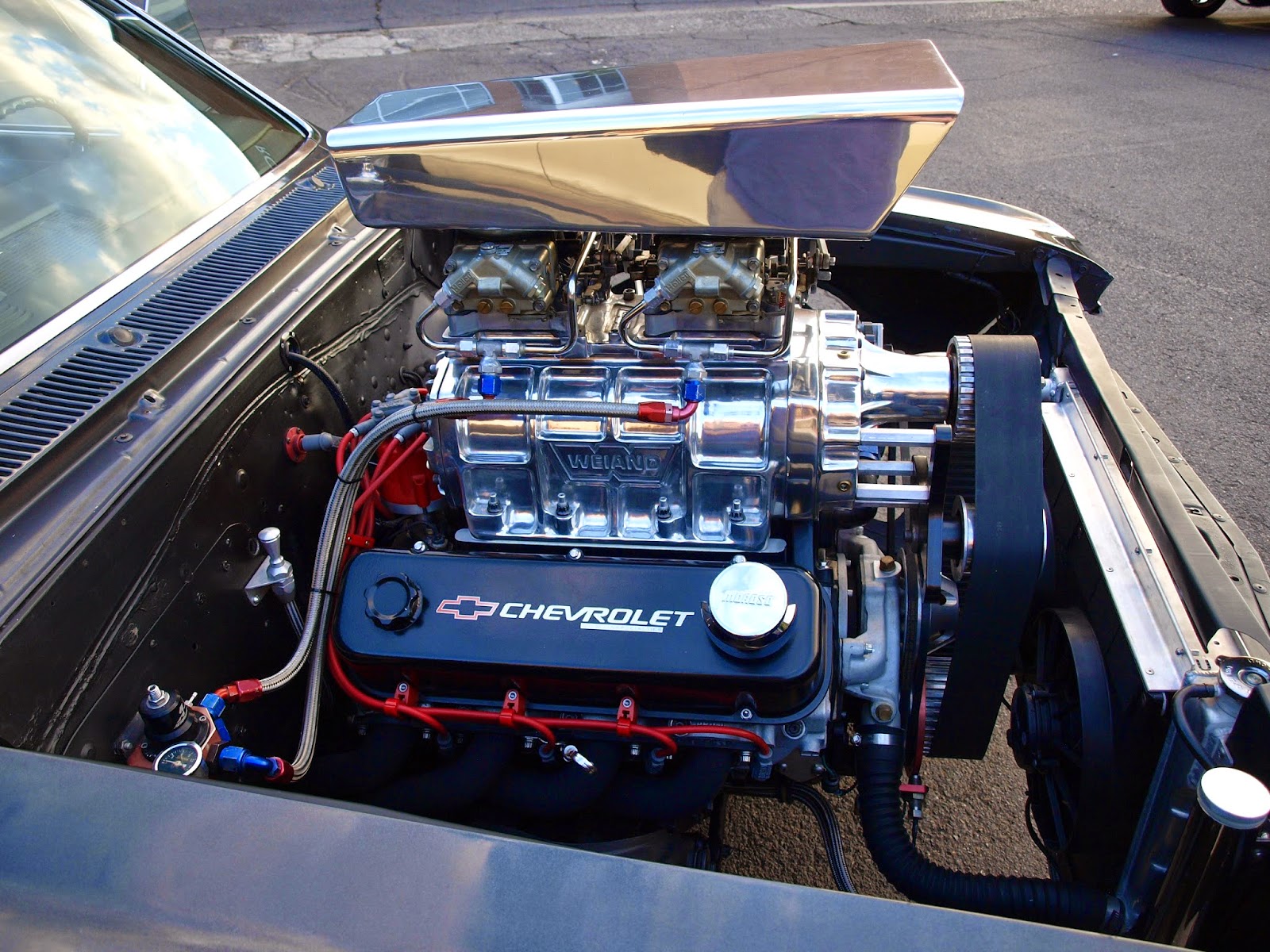 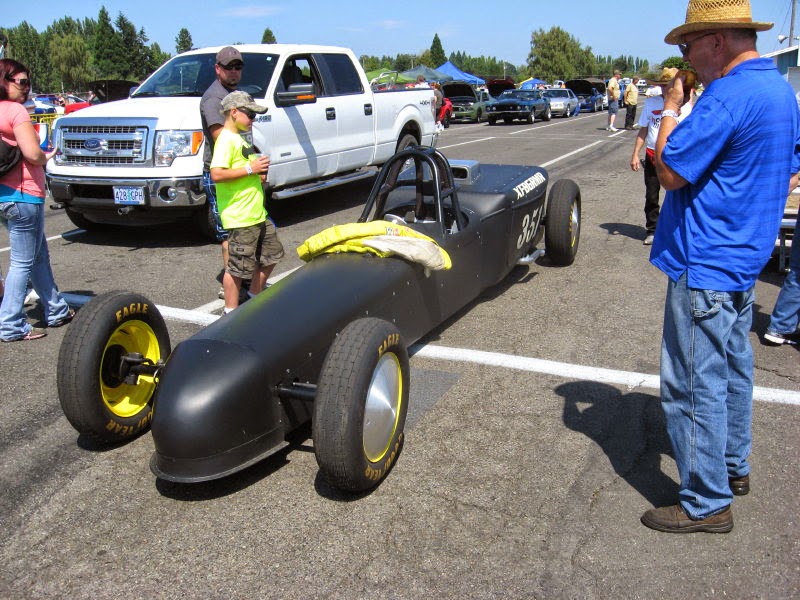 Jim Lindsay took advantage of the landspeed racing event downtime to take the first baby steps in his Modified Roadster at Woodburn Drag Strip last week. Bystanders were amused, as was Lindsay. Chassis builder Marty Strode reports, "The plan was some easy checkout runs to make sure the air-shifted tranny would work, and to get a general feel for the car. Jim flopped the quickchange gears from 2.47 to 5.77. The first run was a cruising 96 MPH, and the second was about the same. He seems very comfortable in the car, and we had a great day!" 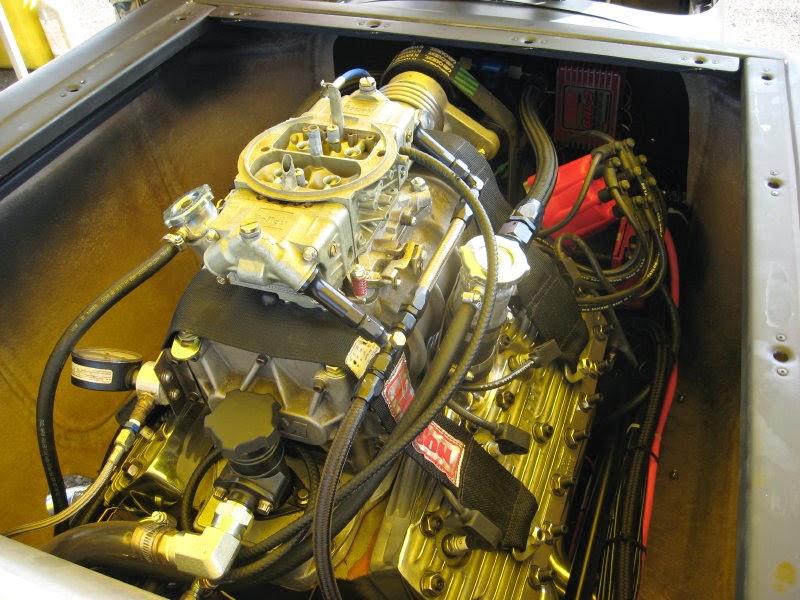 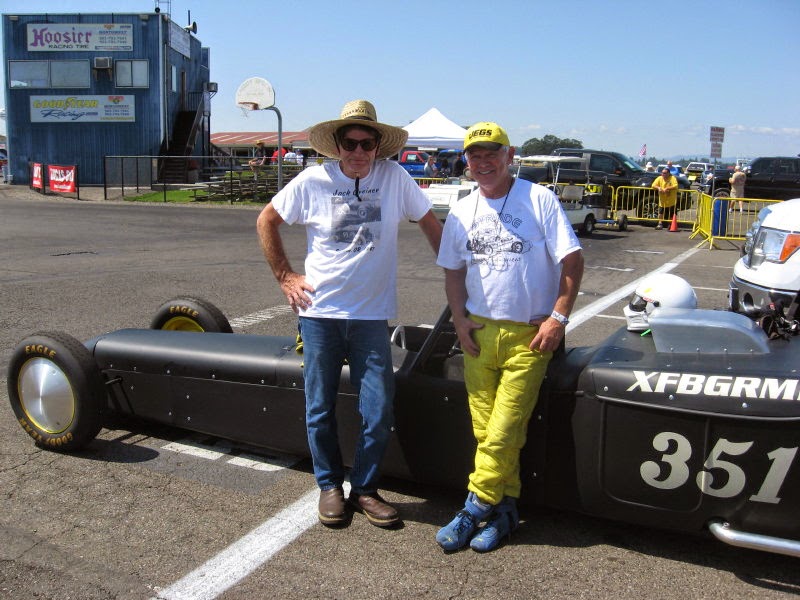 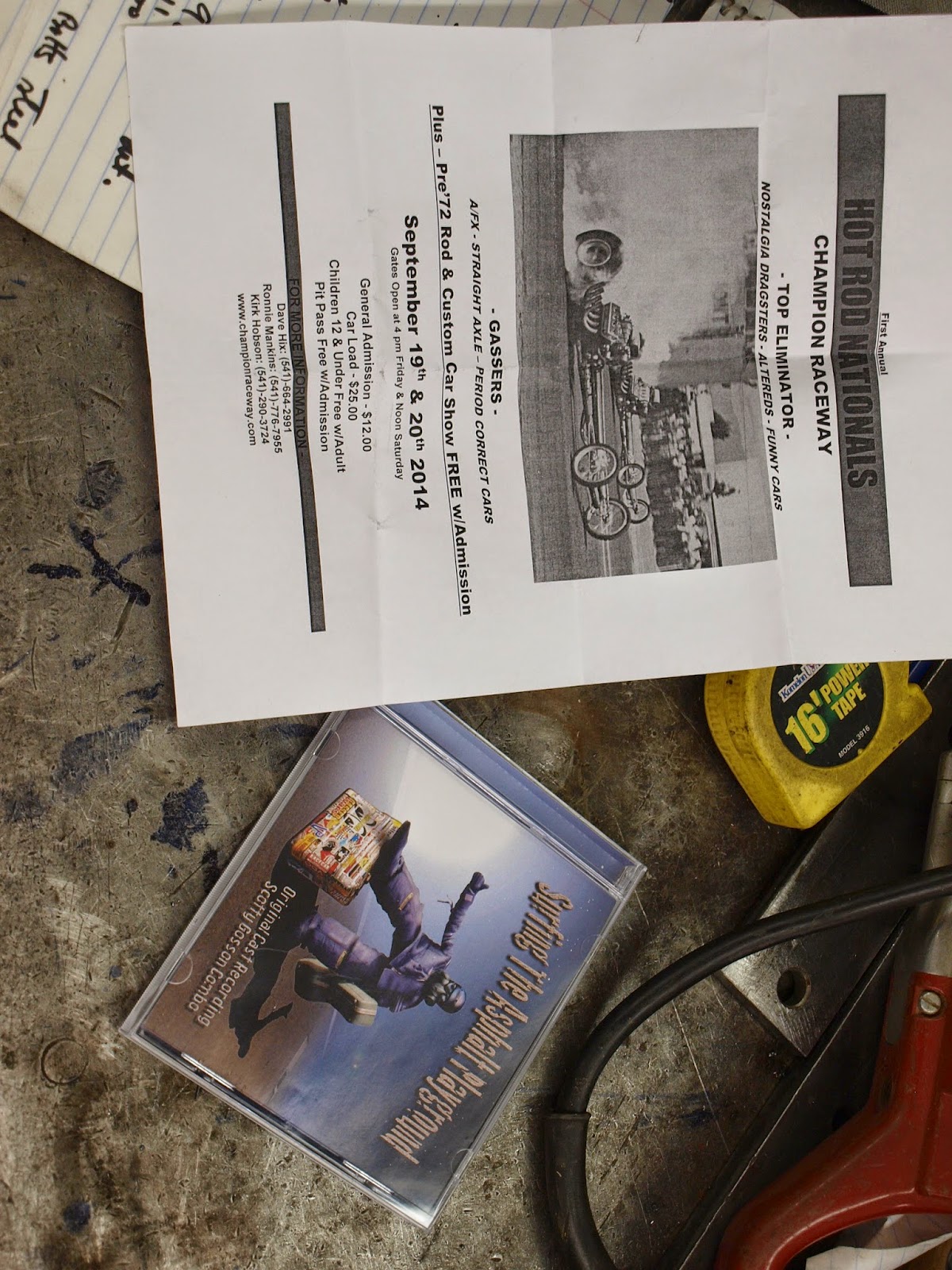 Still just baby steps on the SGE Model A project. But we had fresh background music last week, as the Scotty Gosson Combo CD is finally done! It should be available at www.createspace.com sometime next week. 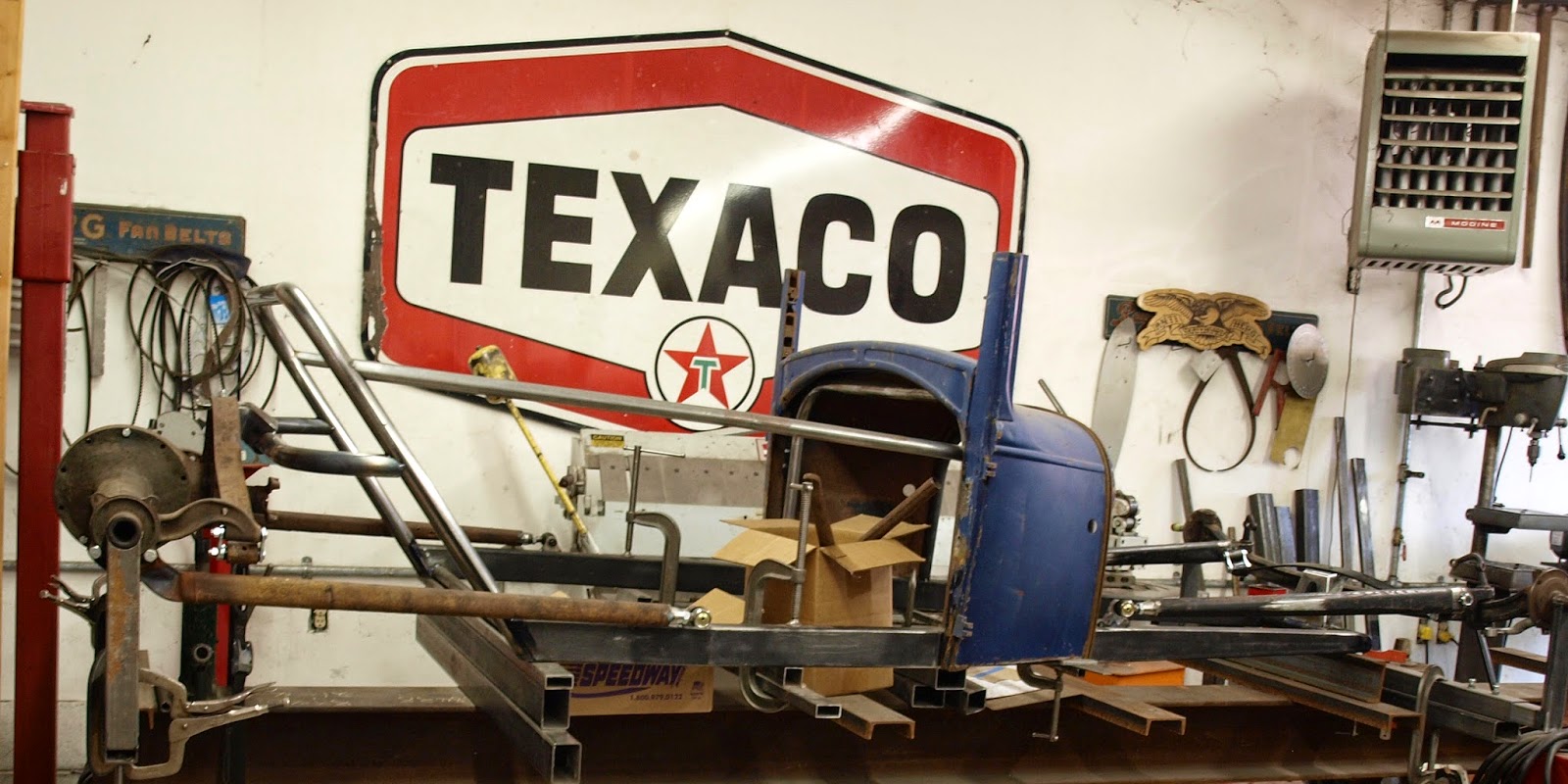 All four wishbones are now bent to shape and tacked in place... 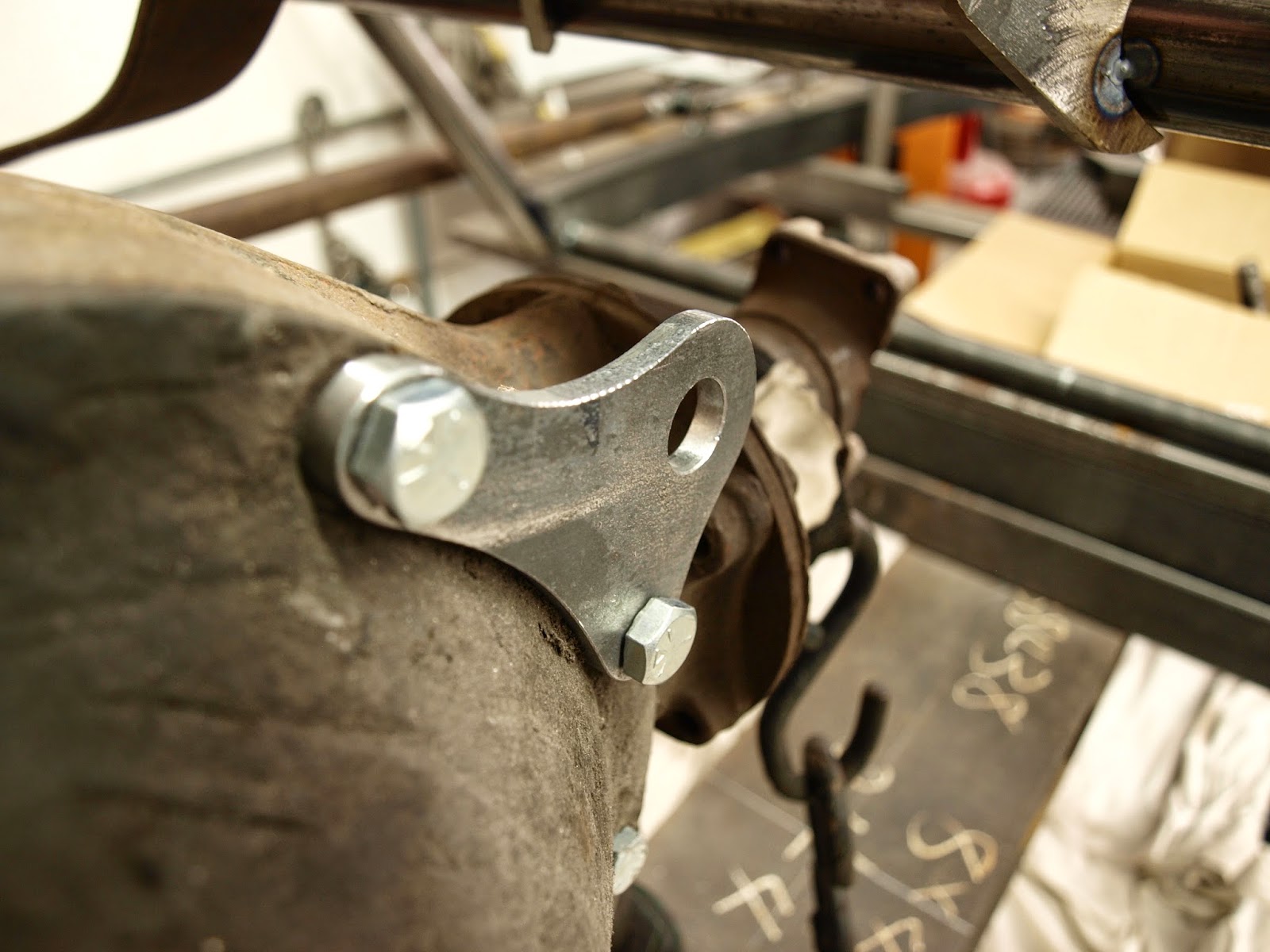 ... and we started making a nifty bracket to mount a torque arm to the crusty old banjo housing. And that's about it, lately. Hey, summer is revving up for the big finale and we've been busy, okay? 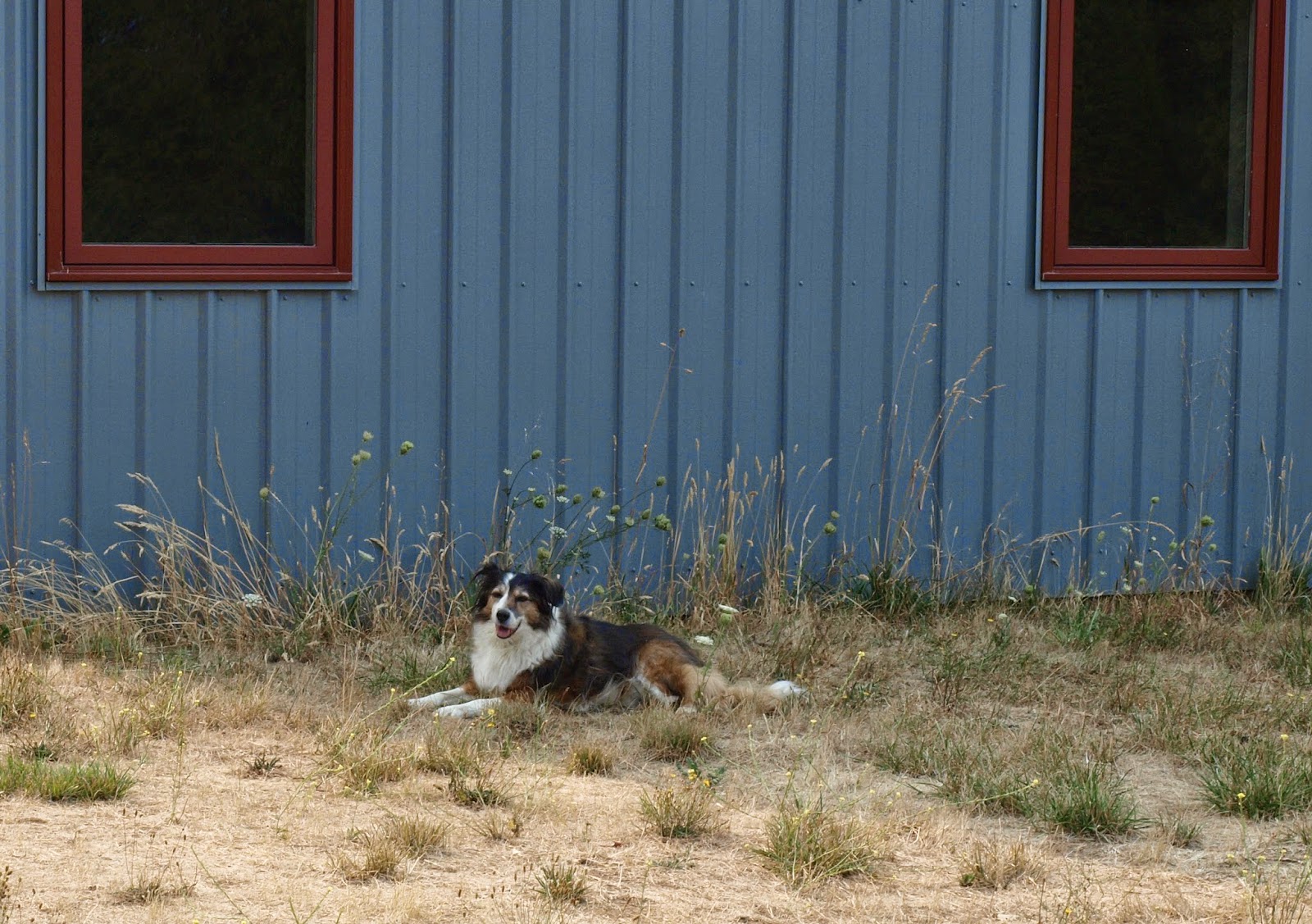 But here's the official Custom Metal portrait of Buddy the shop dog. Doc and I took shared custody, after rescuing him from a crazed body man (sad but true) as a puppy. He's been living the sweet life at Doc's ever since. Buddy and I are both graying and slowing down, as Doc somehow becomes younger every year. (Scotty shots) 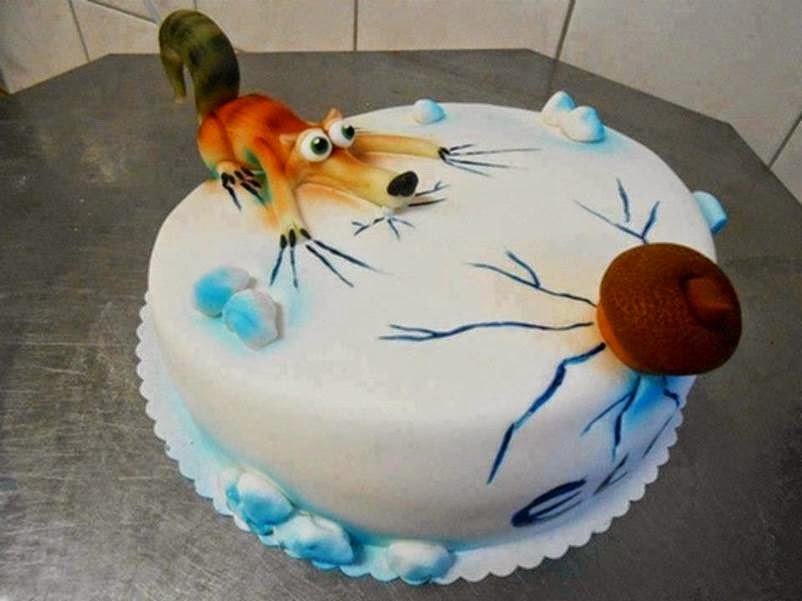 Squirrels and acorns. Right up there with Force and Favre. All part of the natural order. 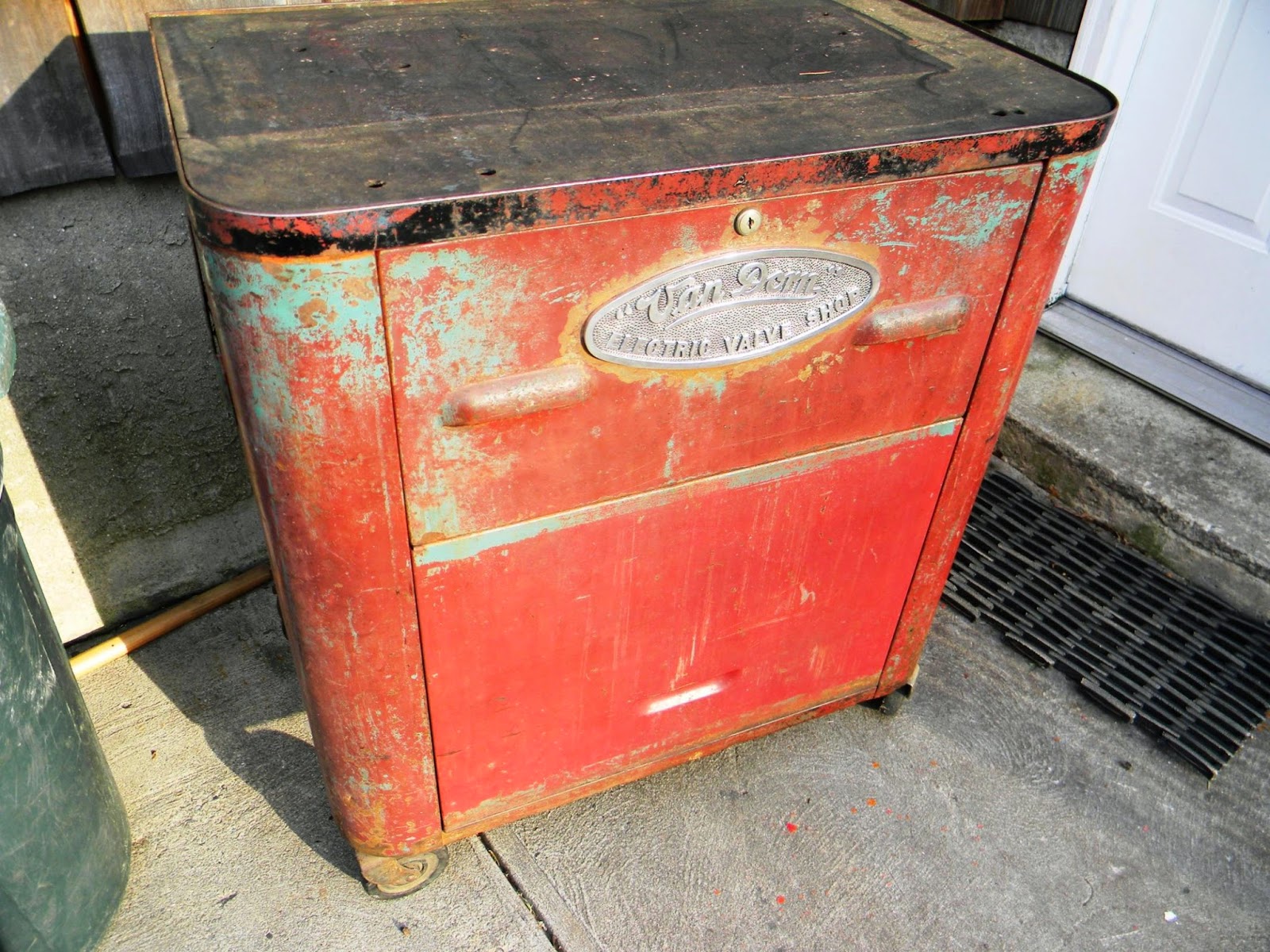 Plucky British company Van Dorne produced these gems through the early 1930s, then were bought out by bullish yanks Black & Decker.

The future of drag racing? Experts are working on it as you read this. Crossing your fingers is a nice gesture, but nothing makes things happen like action. Vote with your event admission dollars. (Image courtesy of the incomparable Gary Campesi) 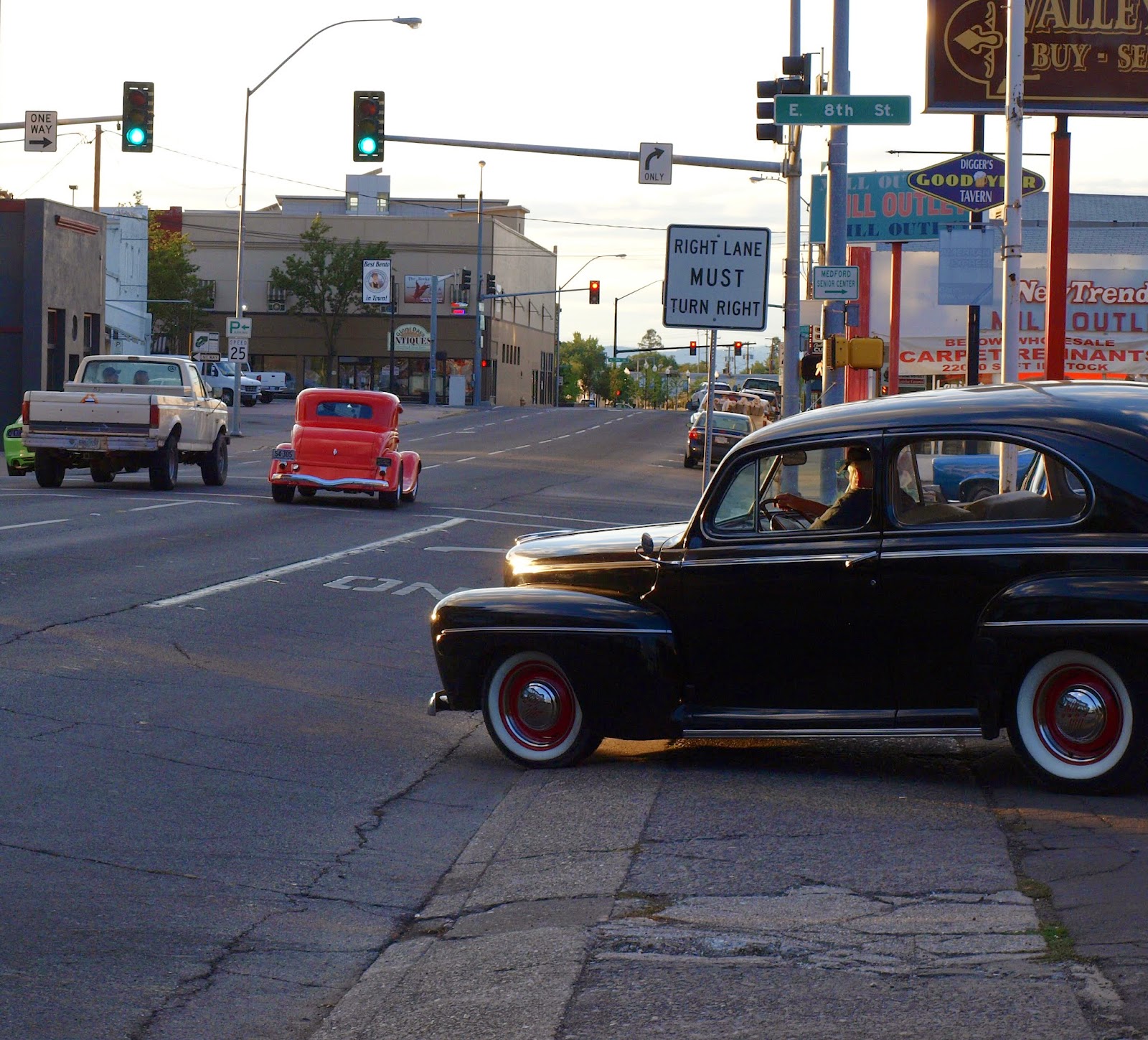 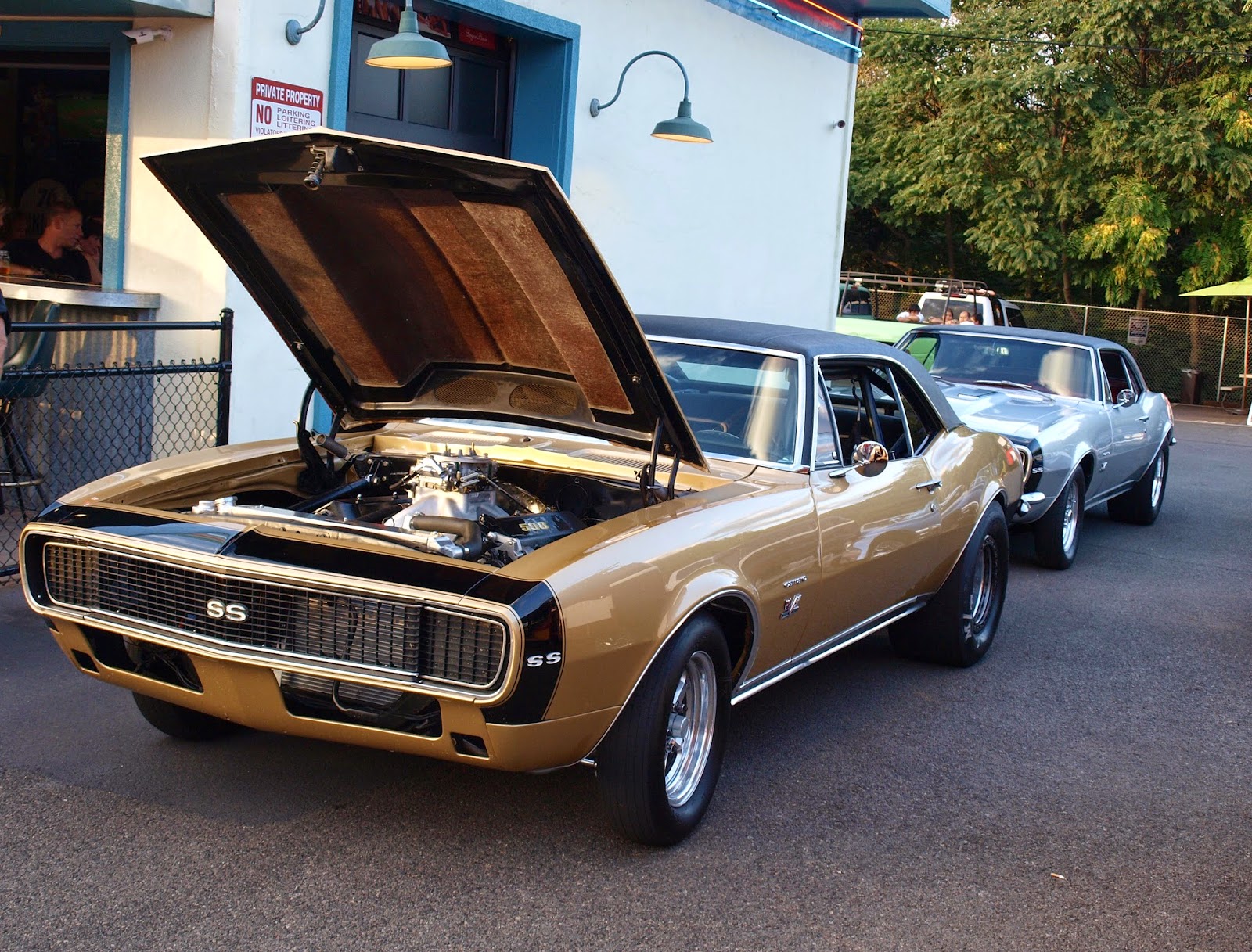 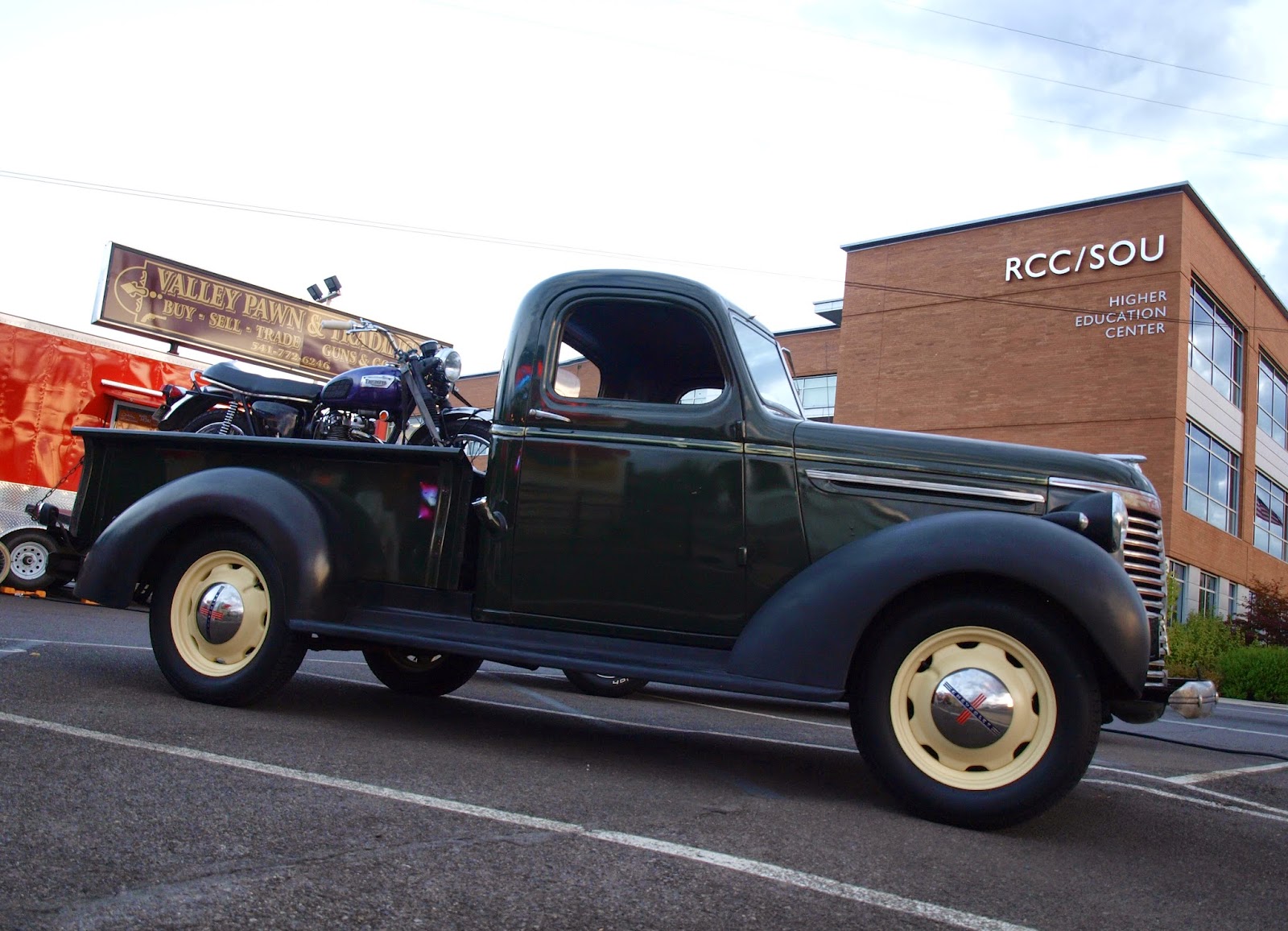 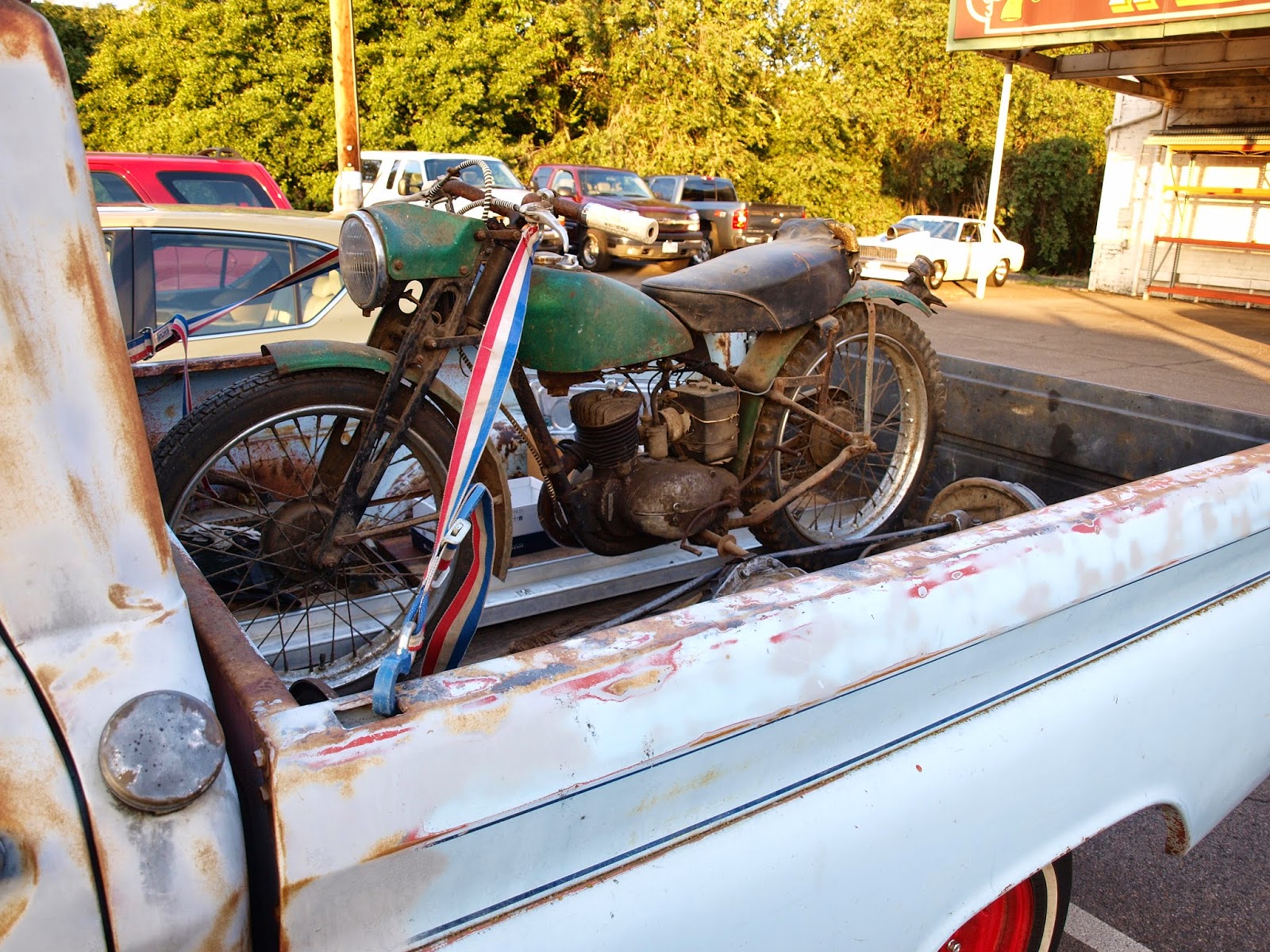 Bonus info: Chevy pickups hauling motorsickles are this week's hot trend. You saw it here first (you know how we pride ourselves on being trendy)! (Scotty shots) 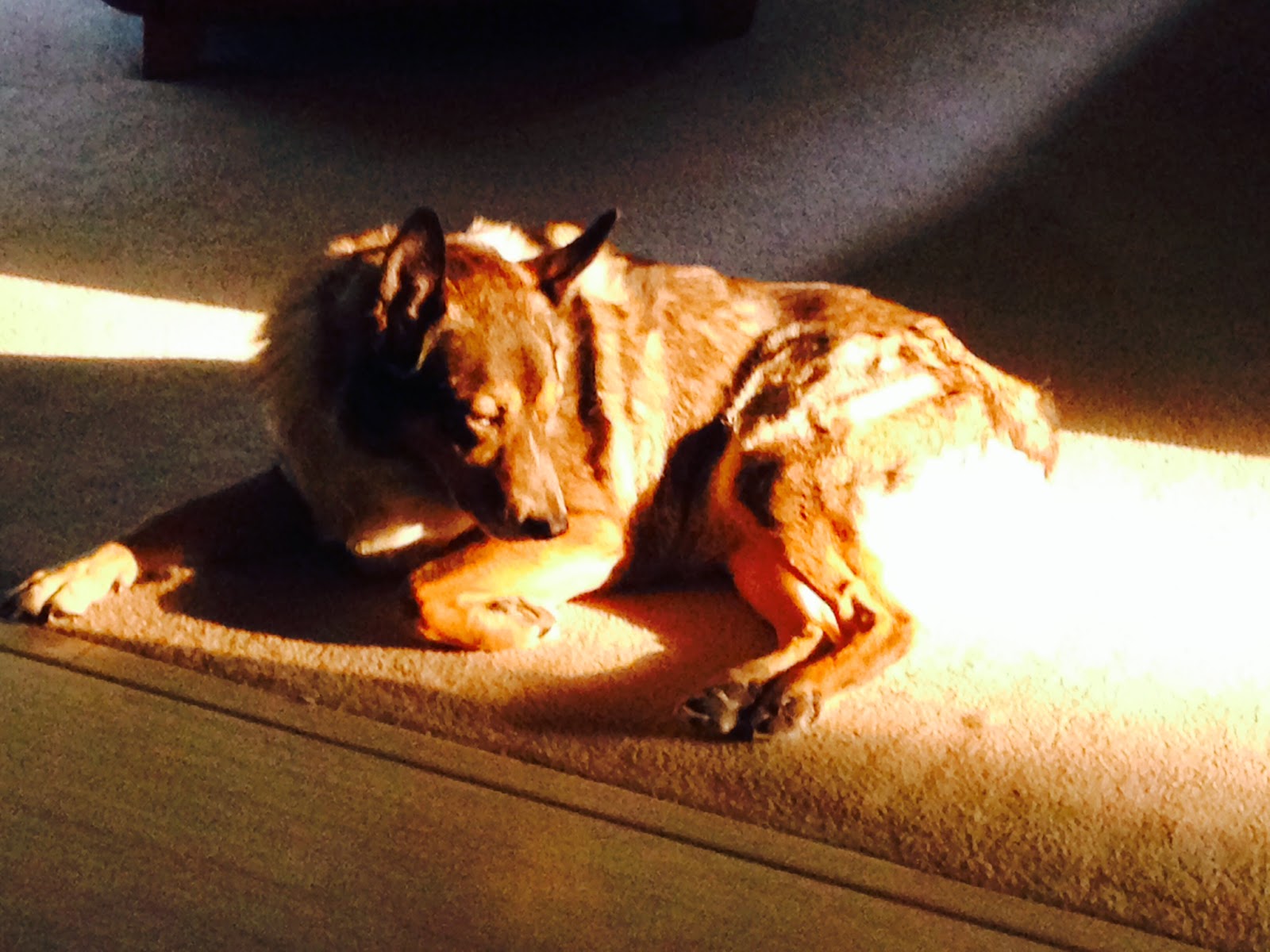