THE MOUSE THAT RACED A JET (AND WON) 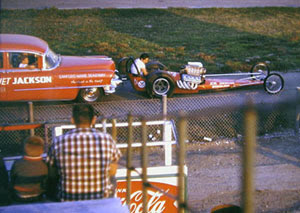 Hungry AA/FD contestant Joe "The Jet" Jackson gets a nerf from his trusty Cadillac hearse at Fontana Drag City. As it turned out, Jackson's supposedly unique circumstance was being paralleled in an opposing universe, located only a few calendar pages and a few miles away. (Photographer unknown)

The black hole of the latest Cartech book has finally released me back into the wild. That book is now being prepped for print, but until it lands on store shelves, it must remain a mystery. Loose lips sink ships, and all that corporate paranoia...

Once released (sometime this winter), I can share more of the book with you. For now, a tease is all you get. I told a lot more stories than would fit into the contracted page count, so there is a bounty of tasty leftovers coming soon to this blog. Only upon finally finishing the project did I become aware of the sleeping stories I couldn't see for the task at hand. Here's one now:

The state of Maine hosted a fervent drag race scene in the mid-Sixties, but the southern California-based magazine publishers sourced their content locally, so that's what you read about in Maine. Those glorified tales of mechanical and driving heroics (and tantalizing purses) ultimately inspired Joe "The Jet" Jackson to load his entire AA/Fuel Dragster operation into his Caddy hearse and chart a course from Jefferson, Maine to Fontana, California's inaugural "200 MPH Invitational" meet in early November of 1965.

Jackson lived in the hearse the entire way to California, in hopes of rationing his meager budget. He arrived at Drag City's Invitational exhausted and hungry, but he arrived. Then Jackson failed to qualify for a Top Fuel field consisting largely of  "little guys" like himself. The only entry requirements were a 200 MPH time slip and a set of Mickey Thompson rods in the block, but Jackson had neither. He jangled around the Los Angeles drag scene for a few weeks, hoping for a lucky break. What Jackson got instead only rhymed with luck, as he was killed at Lions while test-driving an unproven dragster for a total stranger. Joe Jackson died penniless, 3,000 miles from home. His epic cross country journey could be considered a success, as he followed his dream to the source. Not everyone gets to do that in life. But the ultimate result of The Jet's quest remains open to interpretation. 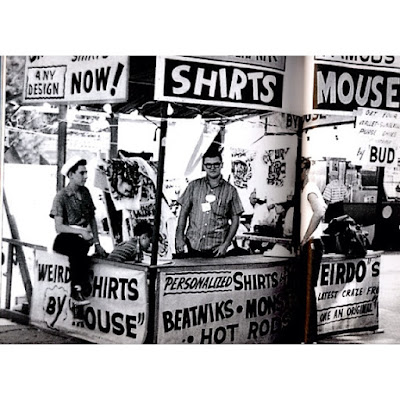 A teenaged Stanley "Mouse" Miller surveys the possibilities, from somewhere on the 1965 car show circuit. With support from his parents (mom shipping orders and dad acting as manager), Mouse raked in an average of a hundred bucks a day, while his contemporaries had paper routes. (Photographer unknown)

The California Pied Piper's merry melody was also heard that pre-psychedelic year of 1965 in Detroit, Michigan. That's where Stanley Miller had caught wind of the tune a few years beforehand, and whistled it non-stop as he airbrushed monster shirts and striped cars at shows across the country. But Miller caught a whiff of something other than just nitro fumes on the West Coast breeze. He and his girlfriend followed the scent to northern California in a new hearse (complete with a legit delivery contract, and a "Make love, not war" sticker on the back window), and arrived at San Francisco's  Longshoremen's Hall just as the Trips Festival kicked off inside (the largest of the Merry Pranksters' "Acid Tests"). Wiped out by the long haul, Miller fell asleep in the hearse, and missed the entire show. But he awoke at his destination, which turned out to be an artist's paradise. Miller (who's father was a Disney artist, earning Stanley his eternal "Mouse" nickname), made his first California connections when befriended by the members of "The Warlocks" blues and jam band, who's last concert he had just snored through. The band had recently decided to change their name to "The Grateful Dead", and needed artwork for posters and album covers. Mouse was drafted on the spot for the job. Maybe the hearse was a factor, maybe not.

Unlike The Jet, Mouse went on to unprecedented success in his field, following his epic hearse ride. His Grateful Dead art helped usher in the psychedelic era that once partly defined San Francisco, and ultimately, a unique and pivotal era of American history.

Behind the scenes, Mouse's (unnamed) girlfriend faced a similar challenge to that of Joe Jackson's loved ones. During the height of Mouse's fruitful partnership with fellow Bay Area artist Alton Kelley, his sweetheart presented this ultimatum: "Either move to the country with me, or stay here and make posters with Kelley." Upon hearing Mouse's answer, she purportedly threw his ink bottle across the room, inking herself, the Mouse, and several pieces of finished artwork. Then she walked out and never returned. Such is the price we pay for our passions.

While the Jet story was discovered during research for the above-mentioned book, the Mouse info came from a recent feature in the San Francisco Chronicle, promoting the "Celebrating Fifty Years of the art of Stanley Mouse" exhibit at the San Francisco Art Exchange. That piece concludes with this reassurance: "He still does hot rod stuff, too." 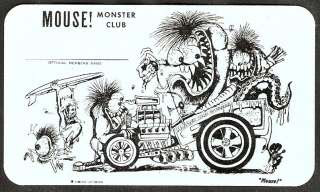 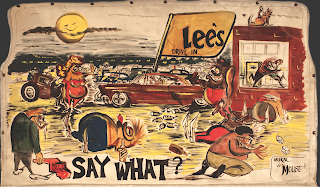 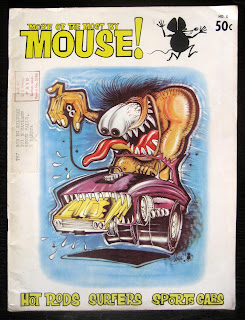 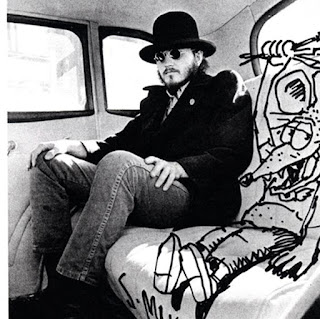 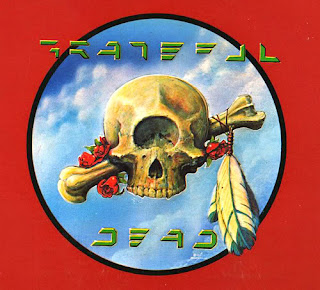 How a mouse pays for a Rolls Royce. 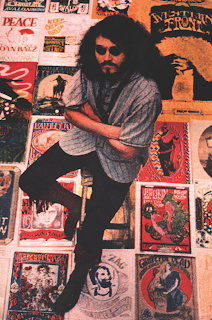 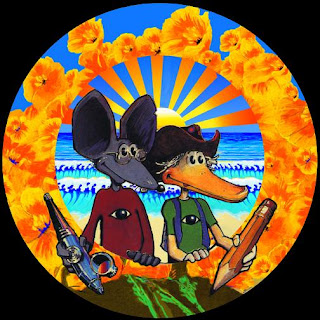 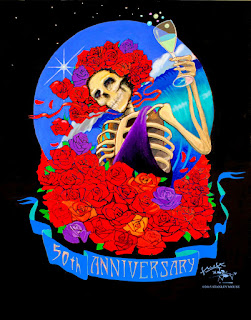 Fifty years on and still at it. 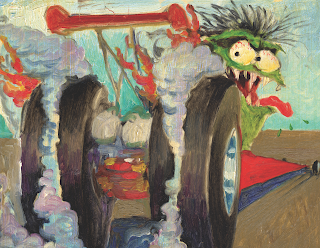 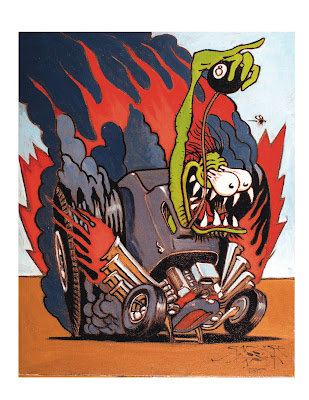 The dust never gets a chance to settle at Marty Strode's Strode Racing Equipment shop, outside of Portland, Oregon. This week was a typical example, as work continues on Pat Ganahl's Spalding Bros. Special recreation, as narrated by Marty hisself. 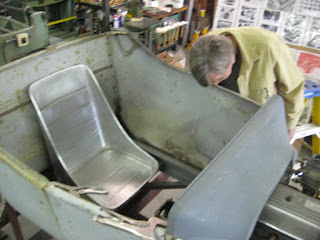 "Too Tall Ganahl and his wife Anna dropped by the shop this week to see the new roadster in person." 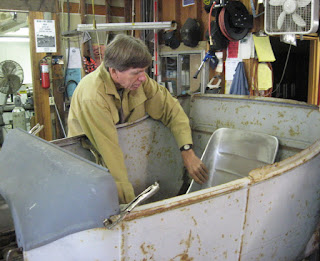 "Pat also delivered the Dennis Webb-built seat (a B-17 copy) and decided to try it on for size." 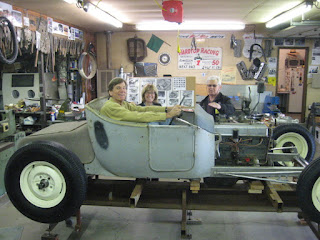 "With Pat's height, it will be a bit of a challenge to mount the steering and controls to fit him, but we're going to have some fun with this car." 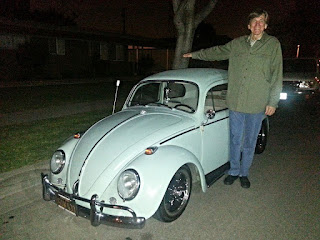 Ganahl demonstrates how he earned the Too Tall nickname with his loyal daily driver Volkswagen. (Photo courtesy of Gene Routh) 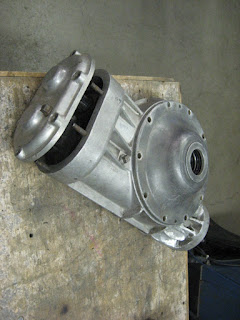 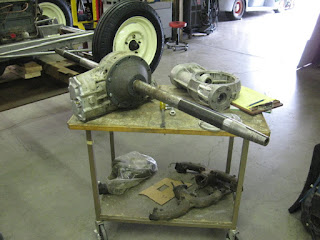 "The Pat Warren axles were built in the 40's and 50's. I think Warren owned Downey Machine. He built quickchange rears for everything from Midgets to Indy cars. He offered a two-speed for Indy, as well. The V-8 center section and side plates are rare pieces these days. I found the center in Kansas, and the 'live axle' side plates were donated by a fellow hot rodder from Perth, Australia. The axle, torsion bars, and other features made the Spalding Special unique back in '49, when it was built." 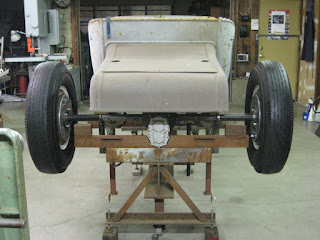 "Time to get the rear axle mocked-up and positioned, so I can build and mount the rear radius rods. The axle in the pictures is a Halibrand V-8 housing that I had laying around, and a Sprint Car axle that I widened for mounting purposes. It will serve the purpose to continue the construction of the car, as we get the Pat Warren center section and side plates fitted to the proper rear axle." (Photos courtesy of Strode Racing Equipment) 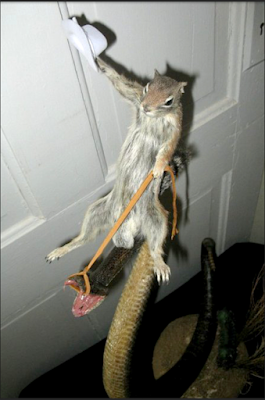 An amazing photo from Motormouth Ray's pal Honda John! Nice shootin', Tex! I don't know that I'd have the presence of mind in this situation to grab the camera, set up the lighting, focus, or even activate the shutter. (Photo courtesy of Honda John) 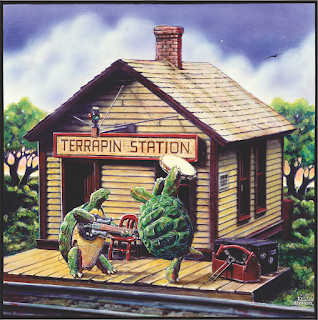 Odd that the Grateful Dead filled half a dozen semi trucks with gear, but only carried this small wooden toolbox on the road. The road crew really had their act together! (Image courtesy of Stanley Mouse collection) 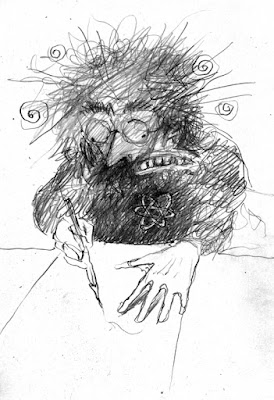 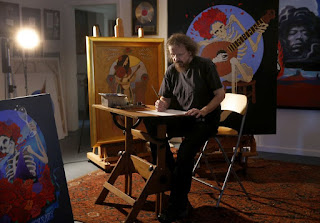 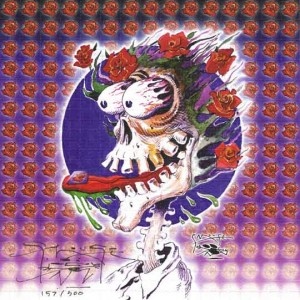 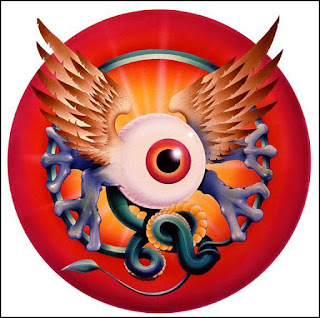 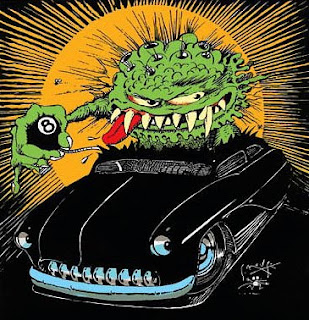 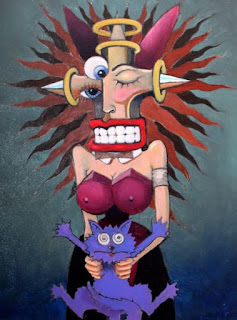 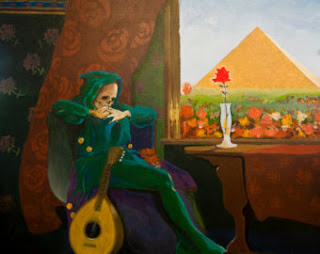 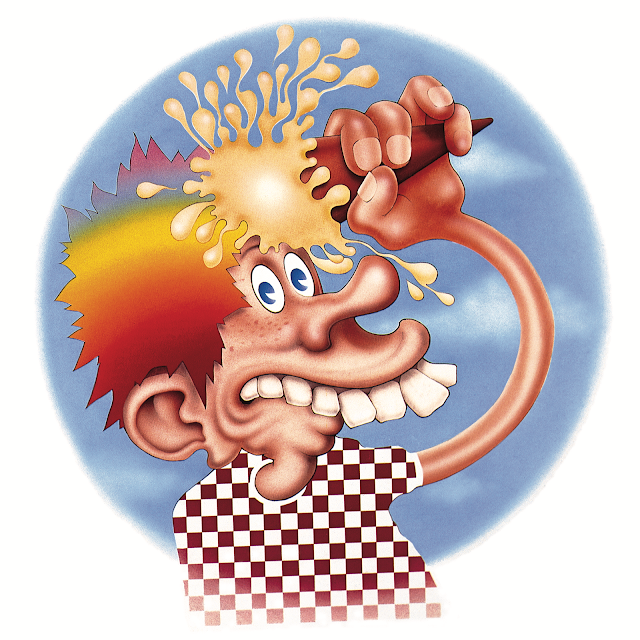 Posted by Scotty Gosson at 5:45 PM No comments: