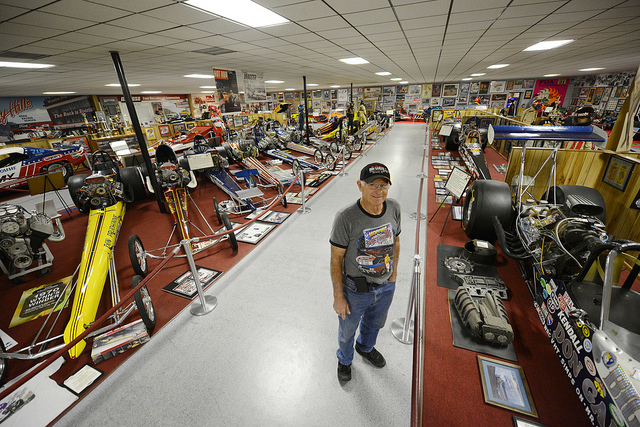 A random collector, surrounded by his findings. The satisfied smile says it clearly: Everyone needs a hobby. (Photo courtesy Garlits Museum) 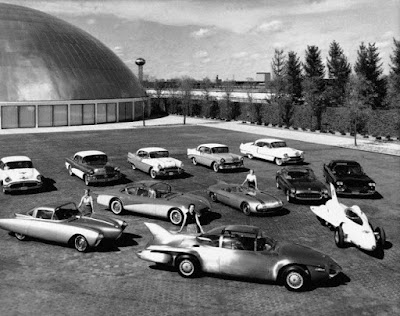 General Motors' 1956 lineup, including concepts. There are people out there who actually collect collections like this. Get your head around that. (Photo courtesy Ford Motor Company. Just kidding)

Gotta have it! Against all odds. Despite impending ruination. I am a collector. OCD is but one of the disorder acronyms I live with, but it's certainly the most fun. It started with childhood wrecking yard excursions to gather fasteners, fittings, wiring connectors, horn buttons, shift knobs, and on and on. You know, stuff I'd need when I got a car. That hardware proved to be the gateway drug to hoarding decals, posters, model cars, diecast cars, T-shirts, then on to the hard stuff: Tools, speed parts, car projects, parts cars to support the car projects, garages and storage units to support the ever multiplying number of projects. Before I knew it (way before), I was chronically strung out.

There are dire consequences for indulging in such insanity. For me, the lessons learned resulted in a scaling back of the hunt to better match the dust in my aching wallet. Today I make due with scouring yard sales and thrift stores for vintage car books and magazines, along with orphaned guitars and their associated obsolete parts and accessories. An old man and his hobby. Happily puttering.

Present circumstances dictate a further shrinking of my collecting activities. This latest chapter of my life requires a simpler, more humble existence. The payoff has been improved physical health and a marked reduction of stress. But the collector still wants to scarf up nuts and bolts to fill more fruit jars. So it's off to the internet - abundant with cool photos of cool car stuff. And it's mostly free, which suits my current situation nicely. I'm an irrelevant sidewalk pedestrian now, watching hot rodding roll past me. But the photographs offer me some level of comfort as I grieve. You can guess the rest... There are literally too many files and folders to count in the SGE Photo Archives. It's sick, ridiculous, and sad. Below are cover ID Photos of some of my favorite folders. Some images may have posted previously. 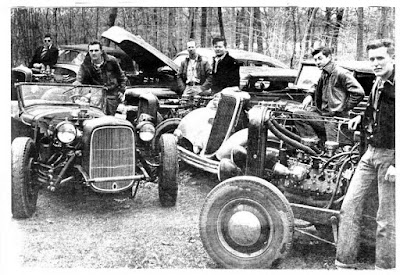 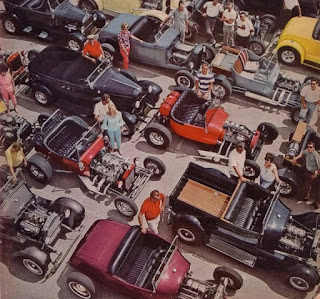 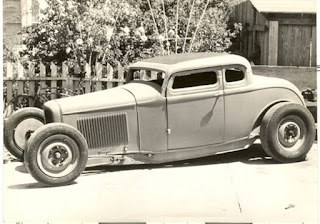 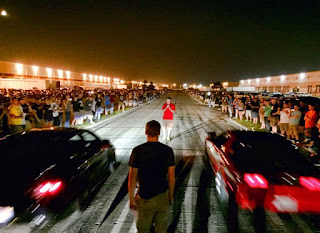 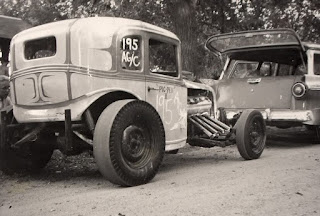 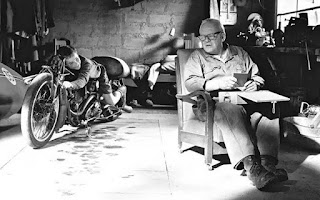 Lucky kids (Photo courtesy Paramount Pictures [the only movie company I can think of. But it was probably them]) 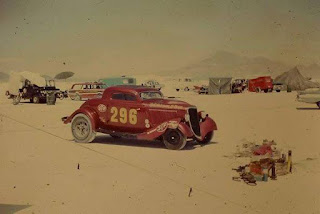 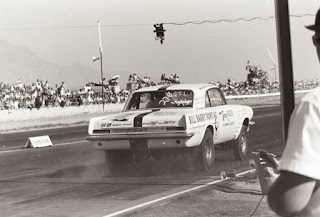 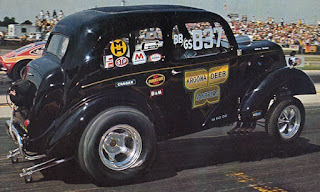 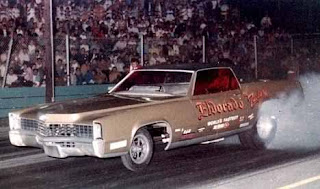 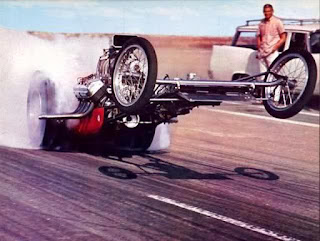 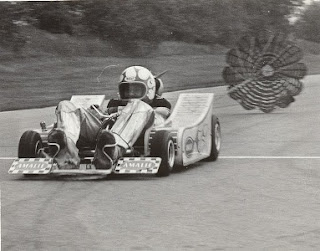 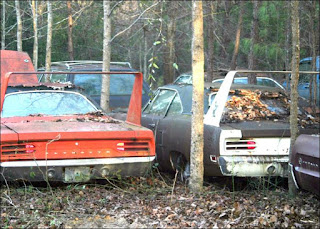 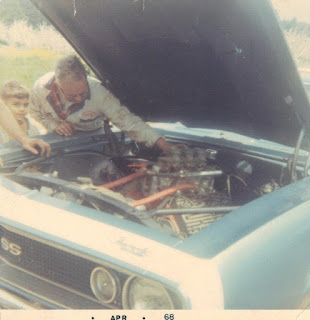 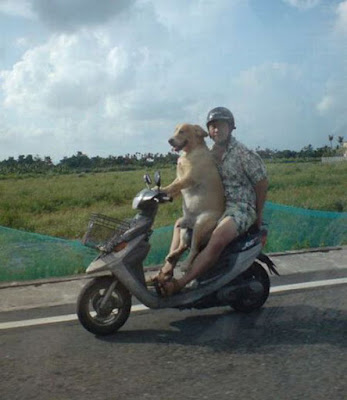 That's right - we've even amassed a bulging folder of gearhead dog photos (oddly, there's not a single Greyhound in the mix). And thanks to OCD, I too am a dog on a bone. 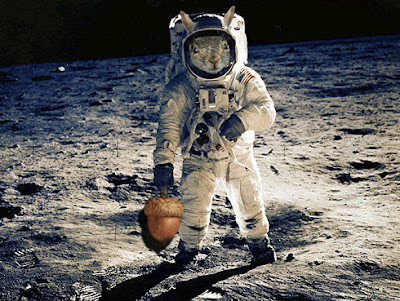 The hardcore collector will go to any length to search out their prey. This individual sports the same aura of gratification as Don Garlits (in our lead photo). It's universal. NEXT WEEK: The latest CDC report on obsessive collecting. See the unabridged edition here first! 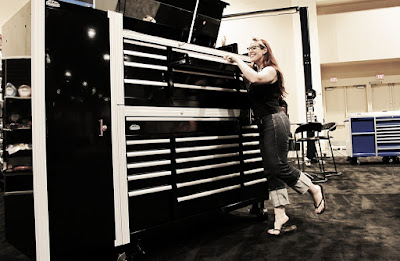 Southern California SGE flatfoot Kristen Cline hit the mean streets to sniff out the latest hot boxes, so you don't have to. You're welcome. But Kristen also had an ulterior motive: It's no coincidence that tool and toolbox collecting go hand in hand. Now that she's splitting wrench time between her Falcon, Studebaker and commuter (a Dipshitzu, I believe), Kristen has the perfect excuse to binge-splurge. Lucky gal! (Photo courtesy Kristen Cline)

Drag Race photographer Fred Simmons contributed a ton of info, images, and wonderful stories to the Lost Drag Strips II book. He was everywhere in the Sixties, and photographed everything that happened. We haven't met yet, but the phone calls and e-mails feel like the foundations of a solid friendship. In passing, Fred casually mentioned the drag racing paraphernalia in his basement, and I asked if he had a photo of the collection. Below is part of what I received from Fred... 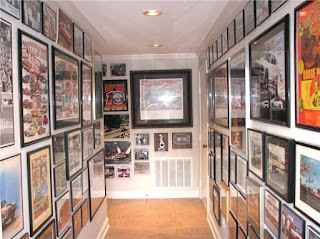 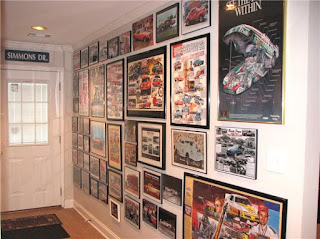 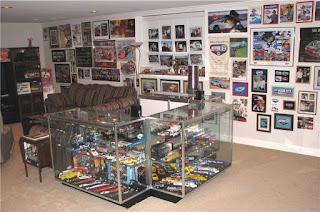 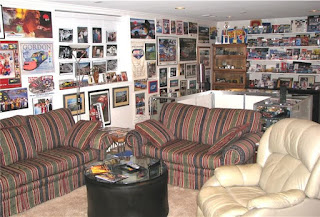 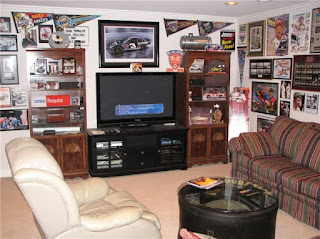 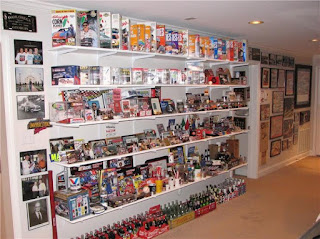 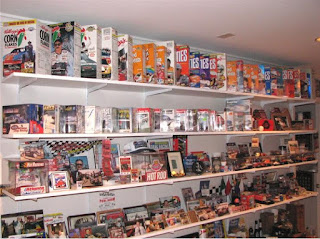 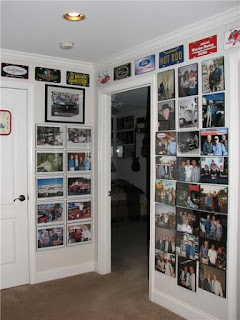 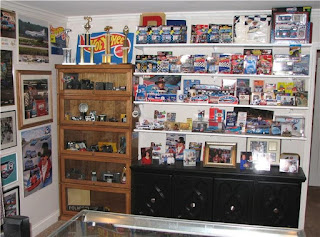 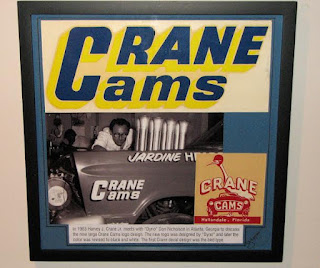 Fred was presented this gem from Crane Cams Vice President David Smith. The Dyno Don Nicholson photo was shot in the backyard garage of Dyno's Atlanta, Georgia home. Fred adds, "He's working on his red '65 Comet. I have pictures of him moving the rear wheels forward, and doing bodywork." Of course. God bless ya Fred! (Photos courtesy Fred Simmons)

Posted by Scotty Gosson at 10:54 PM No comments: