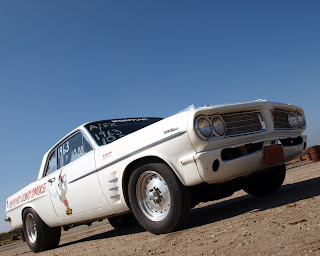 At the tail end of the final day of the 2011 California Hot Rod Reunion, one last stroll through the pits seemed an appropriate way to cap off an incredible week. Out at the fringes of Famoso Raceway's property line, I happened upon a car I'd been glimpsing all weekend. This one was personal. From birth, I've had it bad for a '63 Tempest. Ask anybody. It's a thing with me. I tried to walk past this Tempest that had been teasing me for days. I was almost past the pit when I turned for one last glance and I swear it winked at me.

That's when the owner, his wife and dog came out of the trailer. We were fast friends - instantly connected. As we talked, I couldn't look away from the car. I was falling again. I offered to shoot some photos for a possible feature story. They were all too accommodating. After the shoot, they explained that they wanted to weigh the car before loading it into the trailer - and would I care to drive it to the scales? It didn't take me all day to accept the offer.

The next day, I spent 12 hours driving home with the Tempest swirling in my head. And just a few miles from home was an old car collection where I'd seen a '63 Tempest - about 20 years ago. I'd driven past the location dozens of times over the years, dismissing it, along with the car I knew would surely be a ghost by now. But on this day, I pulled in to find the Tempest had been waiting for me exactly where I'd last seen it. Amazing, yet somehow not surprising. The owner was open to negotiation and we did just that over the following days, while I wrote up a feature on the race car.

Somewhere in the midst of these events, I'd talked myself into believing that the race car feature story would pay for my dream Tempest. That didn't happen. I pitched the story to every magazine that might possibly have an interest and even some Hail Mary long shots, just to say I tried. No dice. Why? I don't know and it's not my business. My job is to tell the story, send it out into the world and write the next one. True, the photos were hastily shot in the cluttered Bakersfield pits. Not good. But I did my best. All I know for sure is, more will be revealed when I'm ready to see it. Meanwhile, I've been getting a lot more stories published than rejected. Why? Again, not my business. I've been blowing the paychecks on gas, food and shelter. I'll get a Tempest if and when it's mean to be. So yeah, this one's personal. Another lesson taught. Learned? Time will tell. 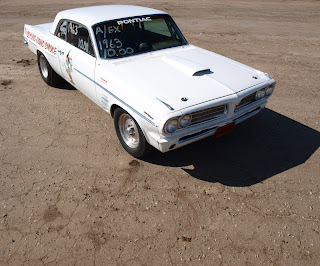 Overhead view highlights crisp lines by Pontiac’s design team. Many argue this to be the prototypical muscle car layout, with flared (“Coke bottle”) quarter panels and relatively short deck and top, enhancing the bicep vibe on a shorter-than-most wheelbase. Side gills and split grille earn bonus points. Hood scoop is one of a Mopar pair.

Every locale has its lunatic fringe element and in northern New Mexico, these are the guys to be wary of. The Haskin name is synonymous with hardcore Pontiac performance throughout the Southwest. Family patriarch Charlie Haskin has been waving his magic wrench over Tin Indians for fifty years and passed the brand loyalty on to sons Clint and Randy. The Haskin brothers were diehard Pontiac street racers: “We were always getting into trouble with street racing. Once, my brother and I had to go to court on the same day. Needless to say, our mom was not happy. That’s when our dad took us to the drag strip and showed us ‘how it’s really done’ – legally and safely.” Today, Haskin Race Engines are known for brutal and reliable Poncho power on southwest drag strips, dirt tracks, and yeah, some city streets, too.


Charlie’s dream car had long been the 421 Super Duty Tempest, but supply and demand dictated he build his own. “Twenty plus years ago”, Clint and Randy snagged a ’63 Tempest body at the local wrecking yard and the build was on. Second Hand Smoke began life as a feeble 326/automatic commuter. Charlie ripped out the wheezy 326 and replaced it with a rowdy Haskin 428 inch warrior. A 3.89 cogged 9 inch Ford rearend with homebrewed ladder bars replaced the spindly transaxle. That’s it. This car was built pretty similar to the factory Super Dutys, with no frame - not even subframe connectors – just a massive power transplant and a homebuilt rollbar attempting to hold the car together. The visual hit is via Cragar Super Trick wheels shod with plenty of Mickey Thompson rubber, some homebrewed bodywork and paint, and Jerry Montoya graphics with a respectful nod to tribal elder Jess Tyree’s iconic Tempest. The finished product kept Charlie grinning for several years.

Then the Haskins happened upon a Mickey Thompson stroker crank (4 ½ inches worth, garnering 495 cubic inches) at a swap meet. The resultant long legged Chief was initially installed in Clint’s 8-second ’69 Judge, but when he built an even hairier mill, the stroker ended up in Charlie’s old Tempest.

This all took place a couple years ago and the Haskins have been savoring the fruits ever since. Clint does the driving these days, while Charlie is only occasionally in on the action. Clint’s take: “It’s like he lives vicariously through me. He’s older now and doesn’t want to race like he used to, so I take the car out and continue making passes in it, for him.” What a thoughtful son! Damn lucky, too.

The Second Hand Smoke car may use archaic tech, but it’s working for the Haskins: “We’ve ran in the nines with it, but we keep it in the tens to avoid certifying the ‘cage, licensing, and all that jazz. That’s why we stick with the 3.89 gear.” That thinking could change when the Haskins install their “more period correct” Hilborn injector, adapted from an Oldsmobile - a move that will surprise no one in Aztec, New Mexico. 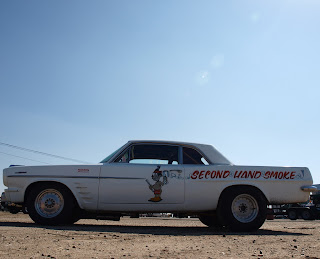 Resembling a Catalina left in the sun too long, the Le Mans-optioned Tempest’s 112 inch wheelbase only has to support 2,865 pounds in stock trim. Though stripped down, Haskin’s all steel version scales at 2,840 pounds with conventional drivetrain layout, rollcage, and original glass. 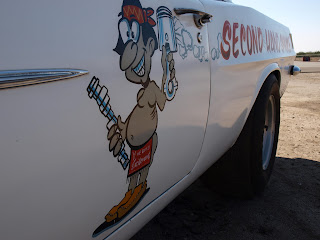 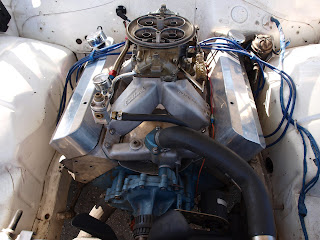 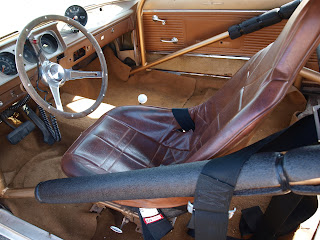 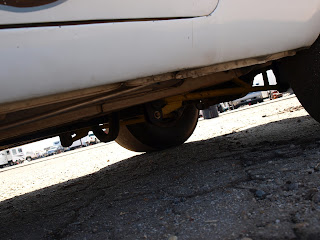 The biggest news under here is the Haskin ladder bars nailed to 9” Ford housing. All else is from Pontiac Motor Division. 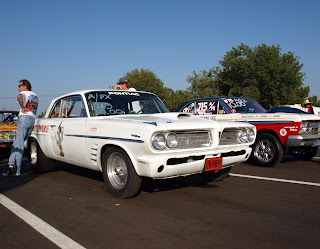 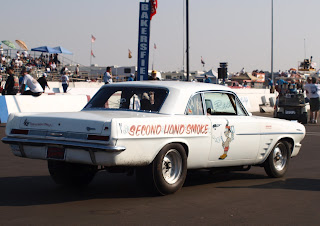 Idling up to the line, the quarter panels wear their M/T freckles proudly. Hey Clint, don’t forget to roll that window up! 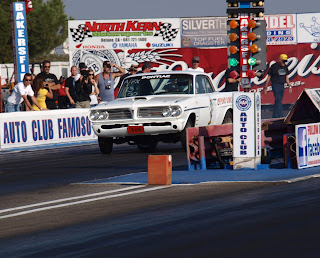 Second Hand Smoke blows off the line with the left front hiked up a few inches, then settles down for the duration. 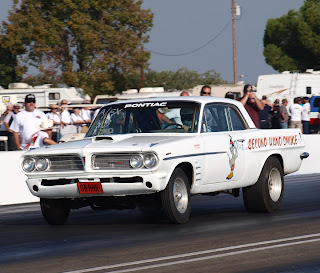 At the 330 foot mark. Do Clint’s knuckles look white to you? The casual front end alignment has been corrected since this run (remember, it’s tired original stuff). 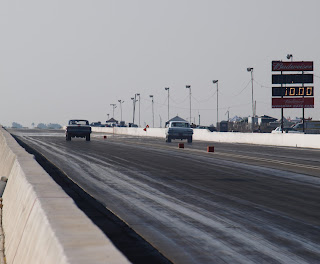 On the big end, the 495 is pulling hard at an easy 5500 RPM as the Tempest challenges Ken Godsey’s 427 Sox & Martin tribute Mercury for space on the finish line stripe. Godsey got there first and Haskin went home. Clint’s home track in Albuquerque commonly has a corrected altitude of 8,000 feet, where 10.60s are considered hot stuff. He went 9.95 in qualifying at Famoso. Oops! 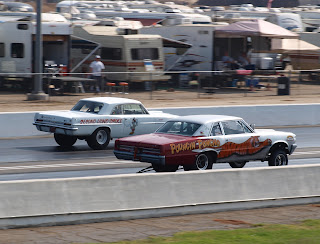 Earlier in the weekend, Clint did a little grudge racing versus buddy Glenn Gibbons’ "Pouncin’ Poncho" ’64 Le Mans and held his own against the alky injected (Pontiac powered) favorite. This speaks well of Haskin power. 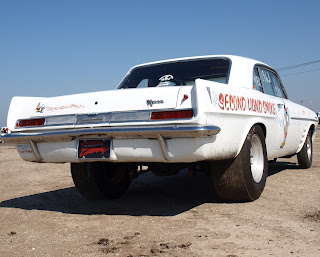 Catching its breath in the pits after an invigorating workout, the Native American compact sizzles and tinkles back to normal temp, as Clint readies the trailer. Rode hard and put up tired, Second Hand Smoke reminds us that real race cars ‘like it rough’. Pampered princesses need not apply. Hey! Check the Le Mans upgrade tail lights – what a luxury liner! 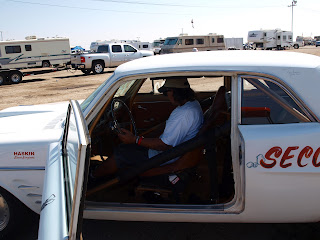 Loose cannon magazine photographer at controls. A damn scary moment for pit-side pedestrians. But jeeze, this guy looks good in a Tempest! (Photo by Clint Haskin) 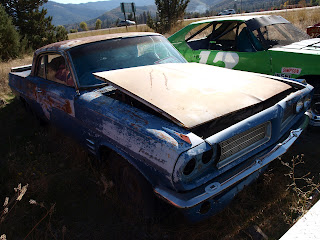 Secret spy photo of author's dream car at undisclosed location. Please don't buy it out from under me.

Posted by Scotty Gosson at 3:15 PM No comments: