WHAT TO DO ABOUT GRANDMA? 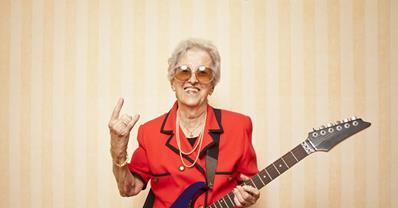 She has an amazing history and can still shred wicked, but she requires more care than ever. What to do? Resto, hot rod, or storage? Tough call. 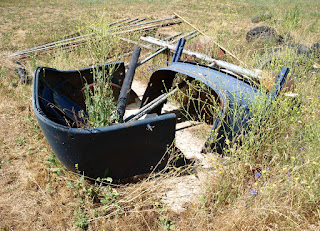 The SGE Model A project got no further than the mock-up stage before reality hit. Doctor Lockjaw kindly allowed me to store it in his field in 1996. It stayed there until 2013. 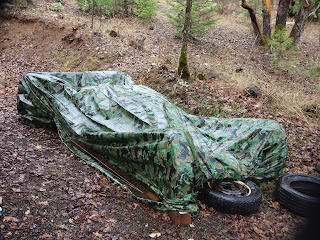 Doc and I got in two years of slow-but-steady progress, then the project was tarped at Allen Stewart's shop in September of 2015. It hasn't been touched since. (Scotty shots)

We do what we gotta do. Despite emotional attachments, there often comes a point where grandma a car project must be put out to pasture. Some linger there longer than others. Some have a more impressive pedigree than others. Some are better off in the pasture, and some deserve much better than the pasture. Tough calls, indeed. Which leads us to a couple of polar opposite examples of how to handle this delicate situation.

This week's hot social media buzz concerned the restoration and sale of the iconic Warren & Coburn "Rain For Rent" Top Fuel Dragster. The infamous Ridge Route Terrors team from Bakersfield (named for the grapevine hill that separated the agricultural Central Valley residents from the Los Angeles Basin's bountiful drag strips) campaigned several cars (including the Bob's Muffler Shop rear-engine dragster, from 1957 to '59). But the Terrors, and Warren & Coburn, in particular, will forever be associated with the modern rear-engine Rain For Rent-sponsored digger.

Rain For Rent was put out to graze (in a "Mister Ed" trailer, overpopulated with black widow spiders) in the late 70's, following its very storied career. After an extended snooze, the rail and trailer were recently (a couple years ago, I think) completely restored under the watchful eyes of James Warren, Roger Coburn, and a host of pro wrenches - several of which had participated in the original build. The finished product is beautiful, and set-up for cackling. The car/trailer package is now up for sale (via internet wheeler-dealer "Spud's Garage"), with an asking price of $99,500.

It's doubtful that any SGE readers have a pile of money like that to lavish on garage art (it won't pass current tech standards, so cannot be raced legally), but for those so inclined, this is one way to get your foot in the door of the Historical Race Car Club. Just hand over some money and immediately begin enjoying ego strokes from your peers. Easy as falling off a rock. And yet another compelling argument that these are the best of times. 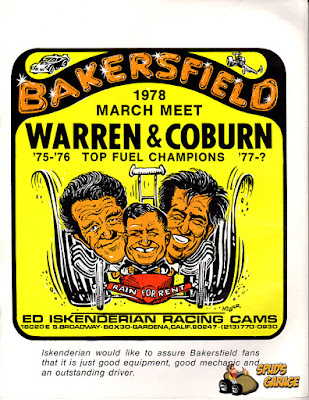 Foreseers of the rear-engine revolution, the Ridge Route Terrors (among others) lost a lot of credit to household name Don Garlits. But the team more than made up for that on the track with their Rain For Rent-sponsored RED car. They beat Garlits with it more than once. Below are a couple of the rain car's most beloved iterations. 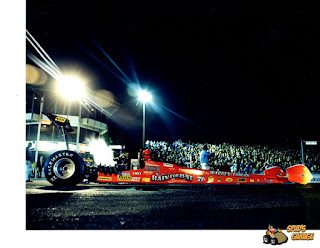 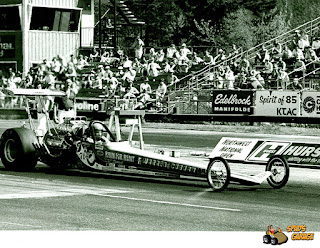 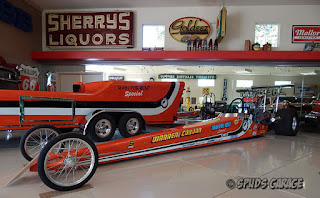 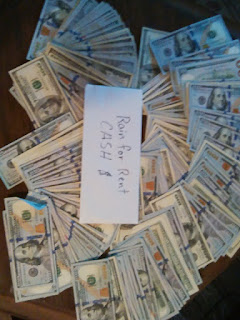 At press time, this $70,000 offer had not been accepted. If you hurry, you just might score! (Photo courtesy Rob Shively)

Simultaneous to the Rain For Rent saga, Kentuckian Dwayne Rader had been trying to track down his dad Denzil's "Rebel Rouser" Ford FE-powered '32 Plymouth coupe. The scrappy little Forpar enjoyed a seven year run at the drags (crewed by the Rader family) before being pasteurized in the late 60's. It took three years, but the junior Rader finally tracked down the car's remains on a Kentucky farm and began a three year restoration: "I did everything to make it as close as I could. There were enough original parts that I could do that."

Alas, dad Denzil passed in 2015, just before the resto was completed. Dwayne recently re-baptized the Rebel Rouser at the local (Clay County?) drag strip. Moon shots and frying rubber defined the coupe's first passes in over fifty years. A photo of Denzil was taped to the dash, prompting this from Dwayne: "I wanted to cry, but I said, 'I can't cry yet - I have to get to the end of the track.' To me, this is my dad, my uncle, all of them."

So here's yet another path into the Historical Race Car Club. Who's to say whether one is better than the other? 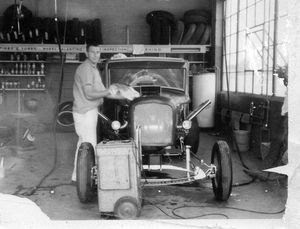 In 1960, Denzil Rader returned from overseas military duty, entered a bar with Dwayne Eddy's "Rebel Rouser" playing on the jukebox, and built a car around the song. Really. Our kind of guy. 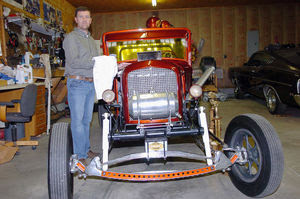 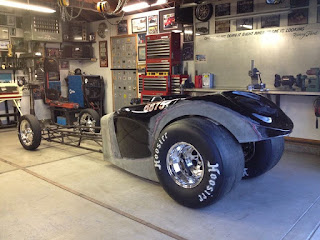 When last we visited Twisty Ron Austin's Medford, Oregon shop, he was wrapping up the radical bodywork aeroization on this Austin Bantam Altered for customer Steve Marcus. The above mock-up passed muster, so Twisty Ron moved on to the chassis details. Check his exquisite work in the photos below. 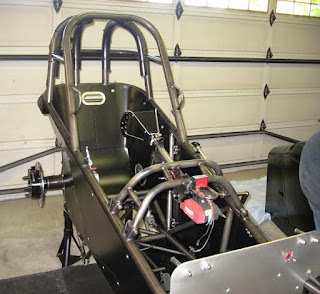 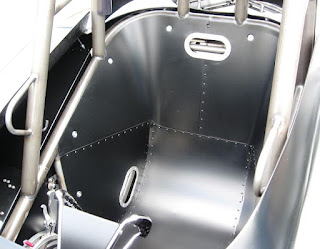 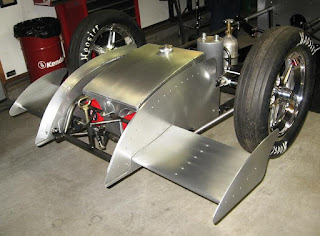 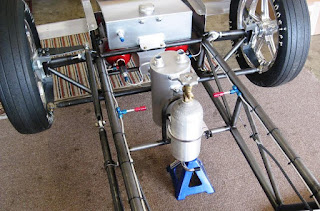 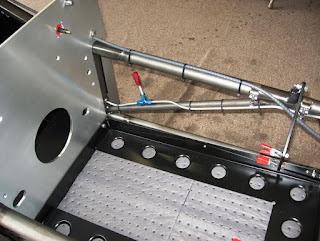 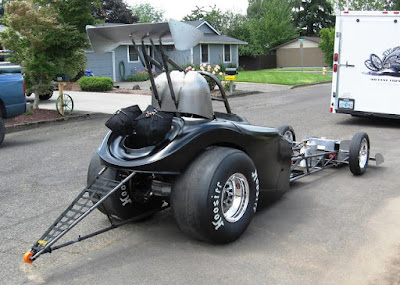 The finished product, as delivered to the Marcus family home in Portland. Steve approved of Austin's work on the instant Altered (just add engine and fuel). We'll be on the lookout for this car in our travels. And we'll be sure not to stage next to Steve. (Photos courtesy Twisty Ron) 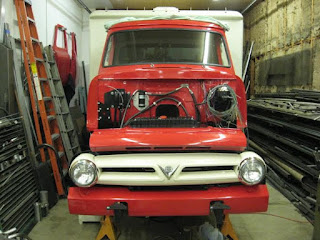 And the last we heard from Marty Strode, he was finally getting back on his '52 Ford COE transporter project. 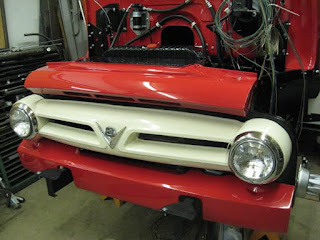 Marty and his loyal assistant Ernie are inching closer to the finish: "We installed the front brakes and started the front sheetmetal alignment process. With the grille and the surrounds in place, it really shows the contrast of colors. The next step will be building and installing the two battery boxes, finish the wiring, and finally get to hear it run. It's been apart so long, the reassembly can be challenging, but Ernie seems to save the day, every time." 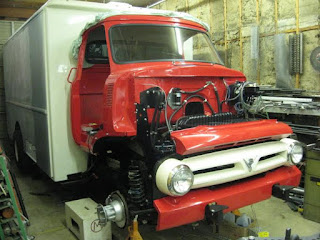 This is gonna be so cool. It's already so cool! Stay tuned... (Photos courtesy Marty Strode) 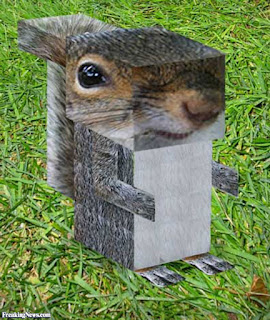 Pablo Picasso is generally credited with fathering the cubism art movement of early 1920's Paris. In fact, Picasso had some help from his friends, and Mother Nature. That's right, this is photographic proof that Picasso was directly inspired by the "Box" squirrels that inhabited the region from the early 1700's until mysteriously disappearing in the mid-1920's. Coincidence? Many think not. Draw your own conclusions, but there's a reason the media is keeping this story under wraps. Just sayin'. 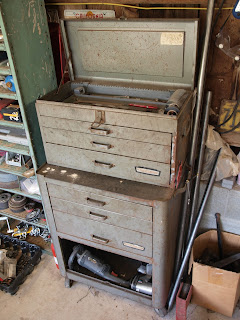 Allen Stewart's early 60's Craftsman rollaway contains every tool needed for his two-bay shop.The tubing leaning against the box constitutes the last pieces of the SGE Model A chassis puzzle. That's how close the project was to the stripe when we hit the kill switch. (Scotty shot) 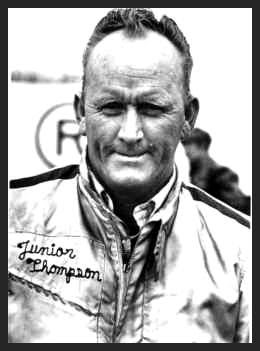 We lost Junior Thompson on May 28th. Dr. Lockjaw and I were pitted around the corner from him at Famoso one year. He disappeared into the tower, then we heard his agitated voice on the PA, berating the fuel racers for "Throwing stupid goddamn money at race cars and ruining the sport for the common working man!" I'm sure going to miss this guy. Below are some favorite Junior shots. They're all we have of him now. (Photographer unknown) 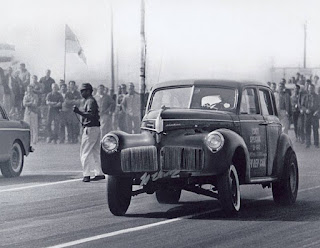 Isky sponsored the 4-door Stude that put Thompson on the map... (Photographer unknown) 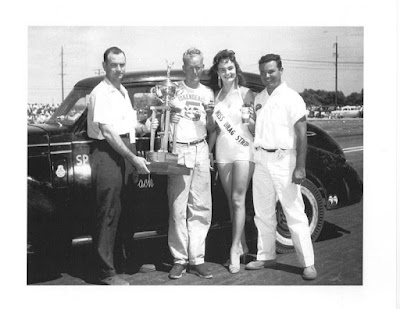 ... and into the winners circle. It was a goer, if not exactly a looker. (Photographer unknown) 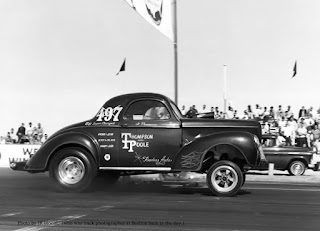 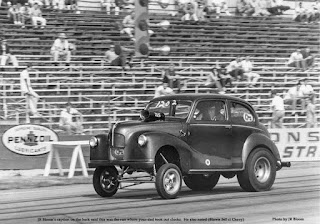 ... but many preferred this Austin, about to take out the clocks at Lions Drag Strip. (Photo courtesy JR Bloom) 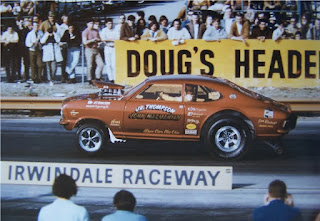 Thompson was right there (with an import, no less) when gassers went all late-model on us... (Photographer unknown) 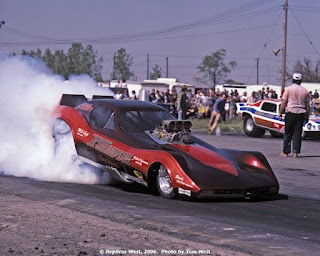 ... then he jumped ship to the Alky Funny wars. Thompson once pulled a stuntman behind this car at Detroit Dragway. On purpose. (Photo courtesy Tom West) 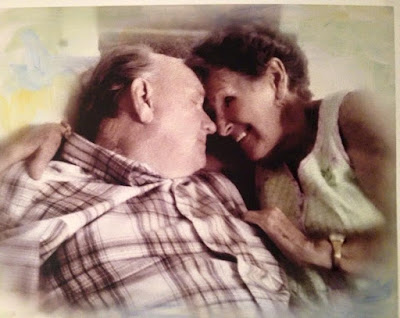 Thanks for all you did for us, Mister and Missus Junior. And rest in peace. (Photo courtesy Rhonda Thompson)