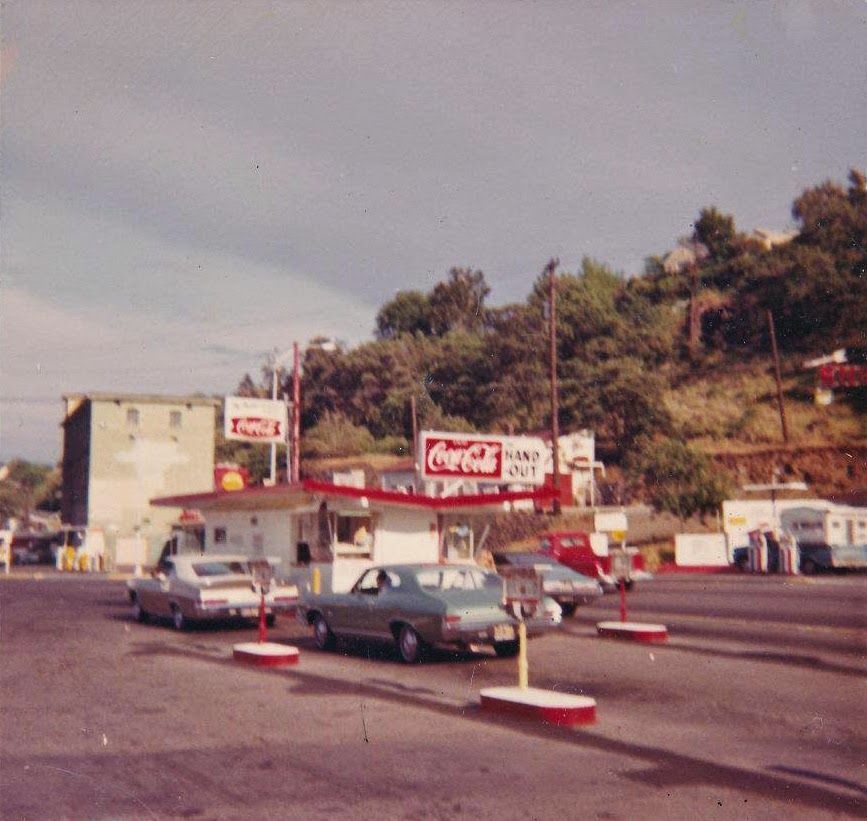 The Hand Out drive-in at the East end of The Dalles, Oregon. This was my first exposure to the social dynamics of the hot rod community. The action here was pretty tame until the sun went down... Thanks to my older brother and sister occasionally getting stuck with me, I witnessed things that other kids my age only whispered about. I was whisked away to Medford, Oregon in 1966 for my own good, but it was too late. This daylight image of brand new cars hitting the Hand Out was taken in 1968. (Photo courtesy of Diane Gosson)

Medford, Oregon is a good place to grow a pear. We used to do a lot of that here. All of us worked in the orchards, nurturing the pears in hopes of seeing our labors on the cover of the next Harry and David catalog. Pears were such an integral aspect of life here that in 1954, our fair city hosted the first Pear Blossom parade down Central Avenue, the main stem of town. It was a big deal. People even came over from rival Josephine County. The gathering celebrated a real sense of community. The parade was such a hit that it has continued to this day.

The pear orchards are mostly gone now, replaced by golf courses which bear little fruit and employ few people. Harry and David are both gone, too. But the company that carries their name has endured and prospered, despite some pretty wild challenges. We're all cheering them on.

Back when, money earned at the orchards was funneled directly into hot rods and drag cars, so several have been acknowledged at every parade since 1954. Until this year's edition. The Model A  and Corvette clubs had a token presence, but I saw zero hot rods. Time marches on, and change is healthy. Like medicine, we don't have to like the taste, but we must accept and adapt to reality, lest we sink into the quicksand of denial. So I embraced the parade. The following is my exclusive SGE coverage of a noisy Saturday on Central Avenue, as viewed from the SGE World Headquarters complex. 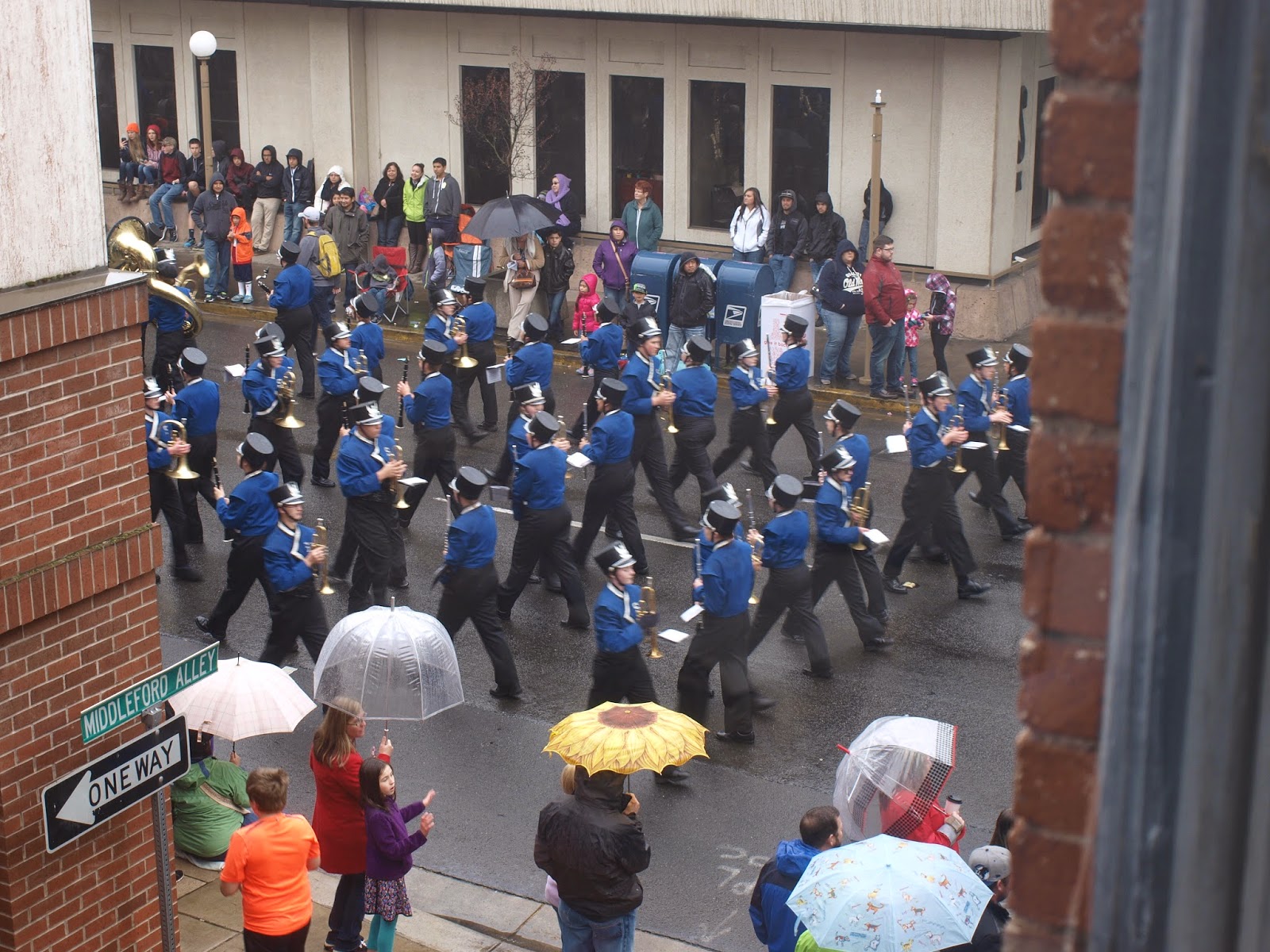 My wake-up call last Saturday morning. I responded in predictable but concise fashion: "Get off my lawn!" These guys were obviously confused, but their lack of directional ability was made up for with some badass jamming. Marching bands were never this cool when I was in high school. 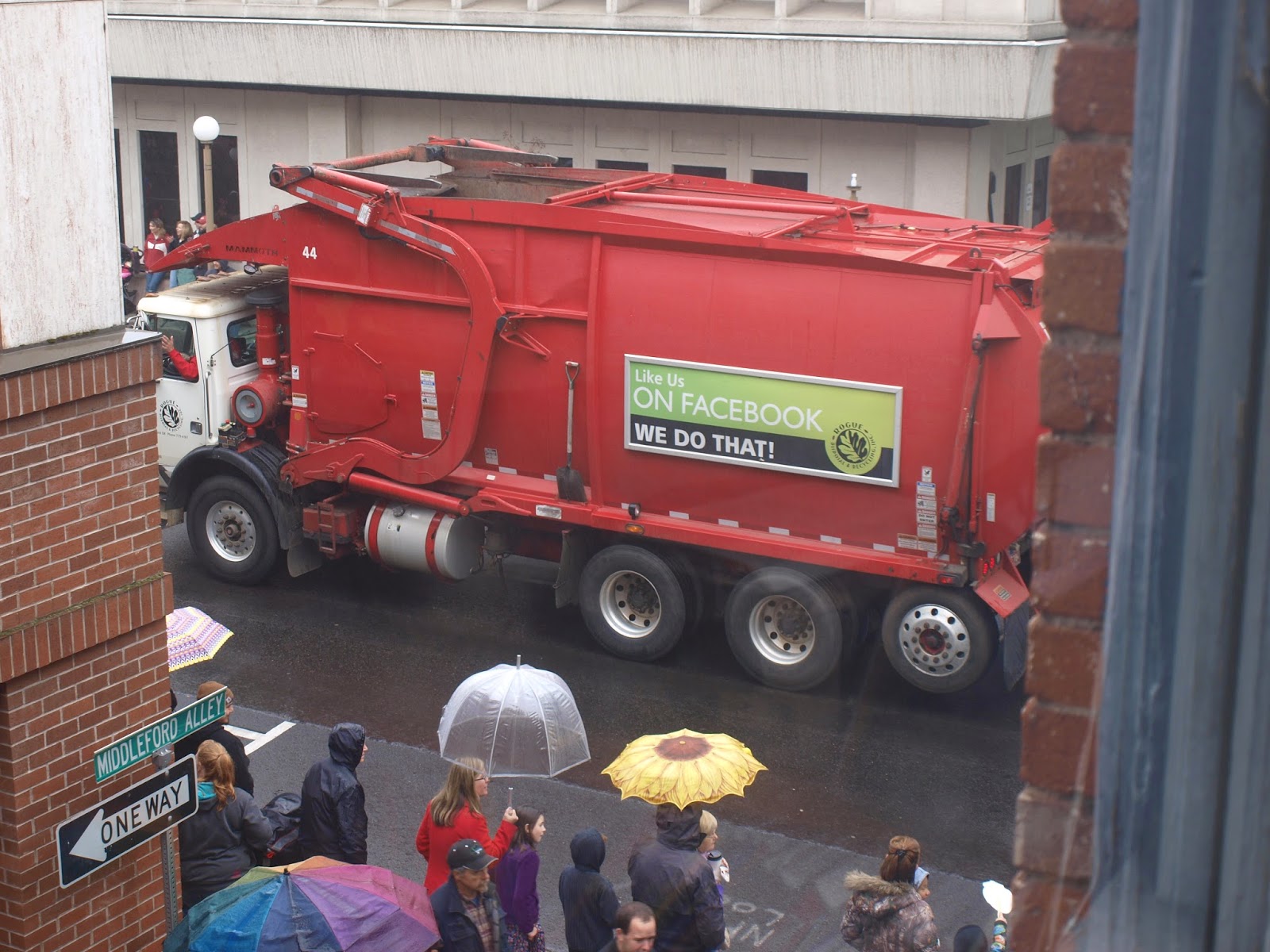 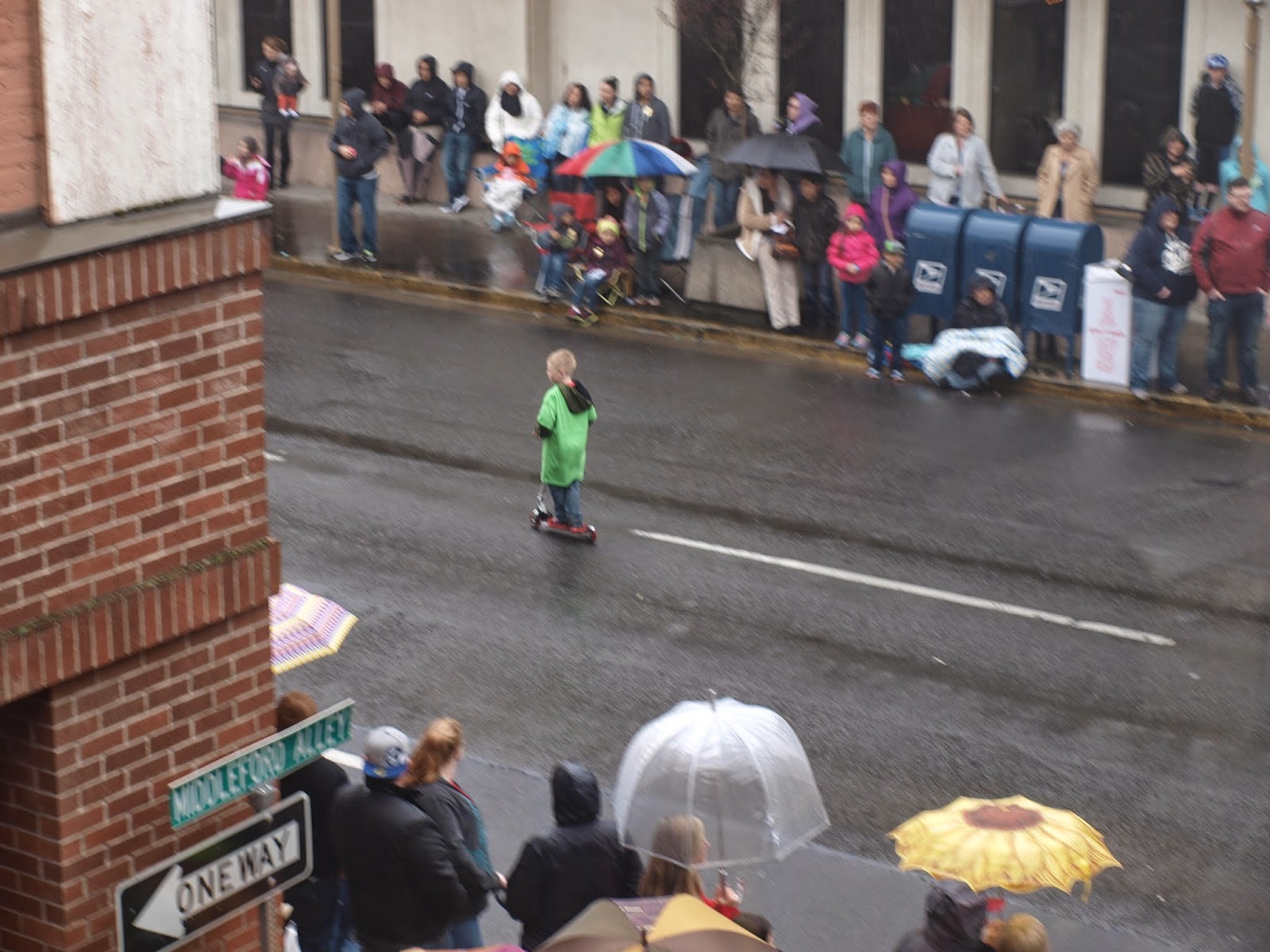 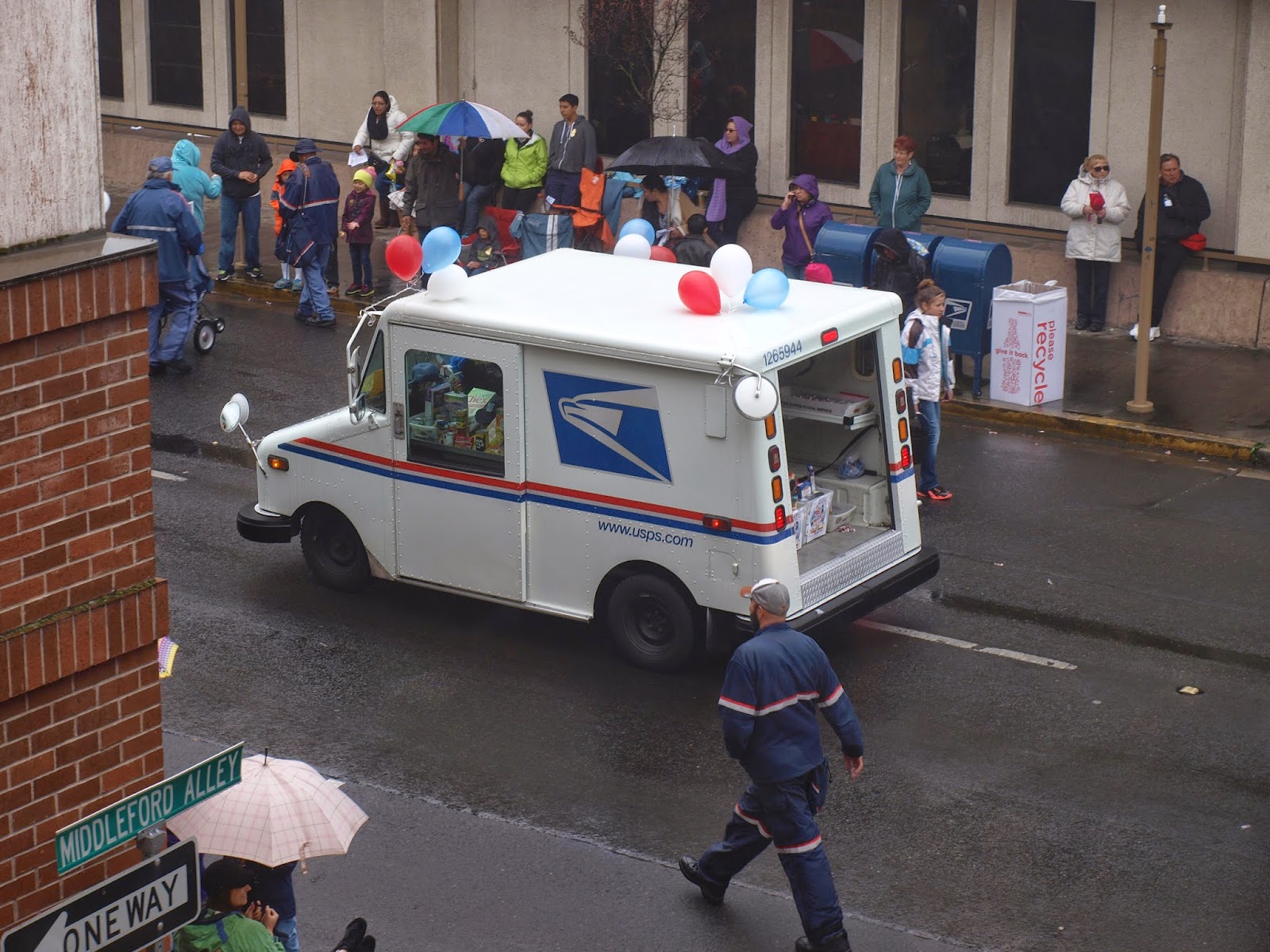 We Medfordites are a simple people, with simple tastes. It doesn't take much to draw a crowd here, even in a chilly rain. Speaking of which, transplanted Californians are conspicuous with their umbrellas. Native Oregonians wear hats, or just go au naturale. 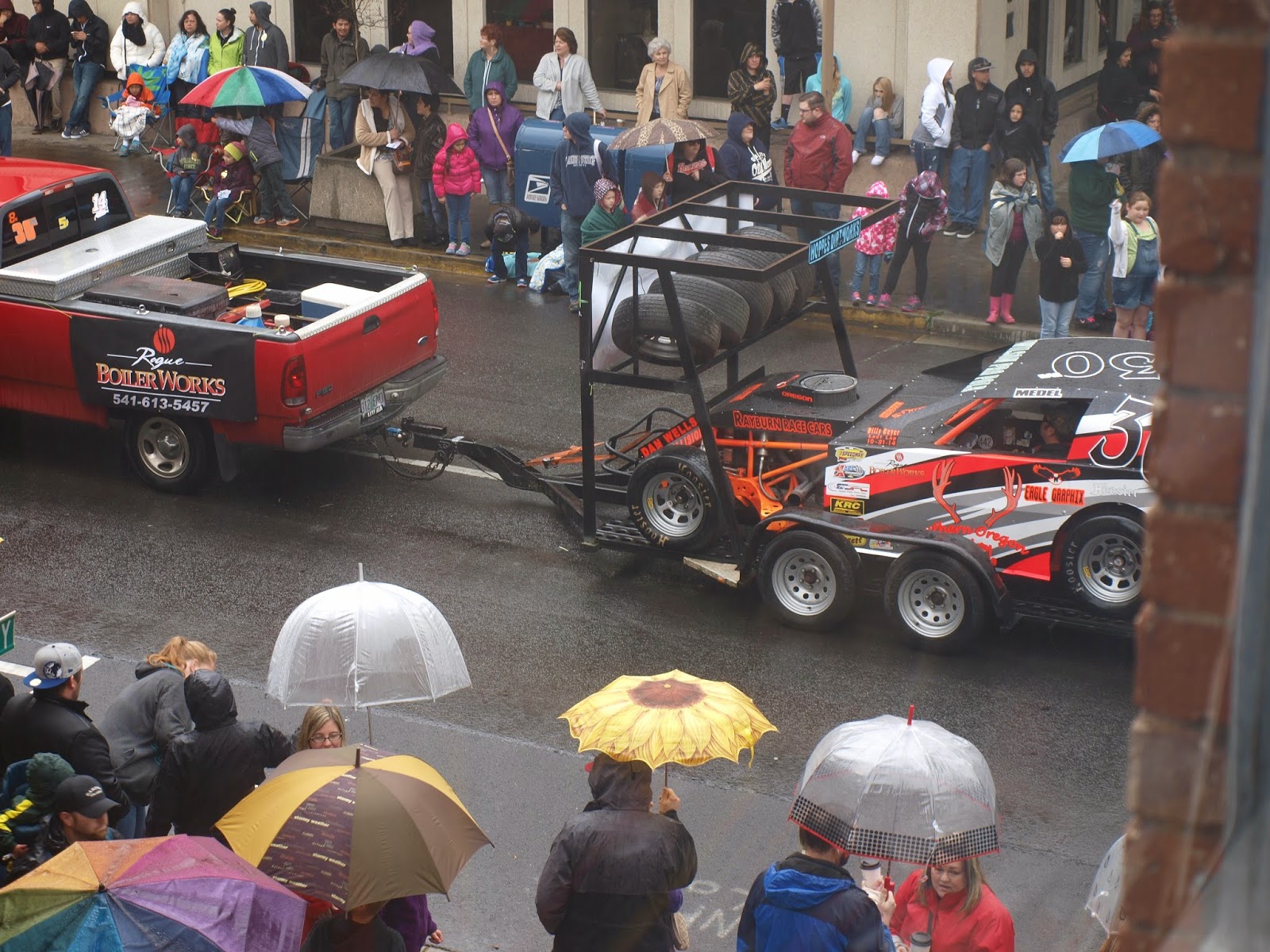 Though no hot street or drag cars were entered, the parade still features representatives from our 3/8th-mile clay oval track, which remains wildly popular. And why not? Screaming smallblocks broadsliding through dense traffic at speed are an undeniable spectacle. 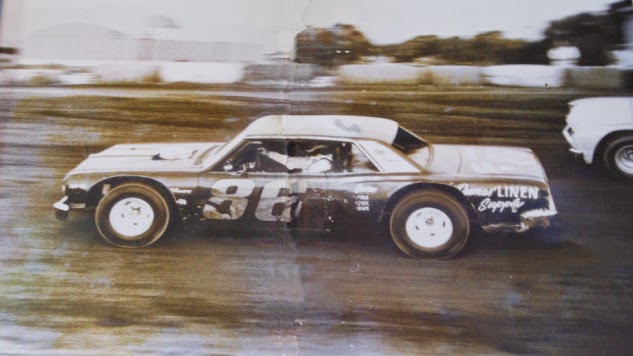 Our mom took my younger brother and I to the Posse Grounds every Friday night for years to cheer on hometown heroes like Dane Smith. I never got involved with this scene (though my brother did), but it's definitely part of my makeup. (Photo via Ronnie Mankins) 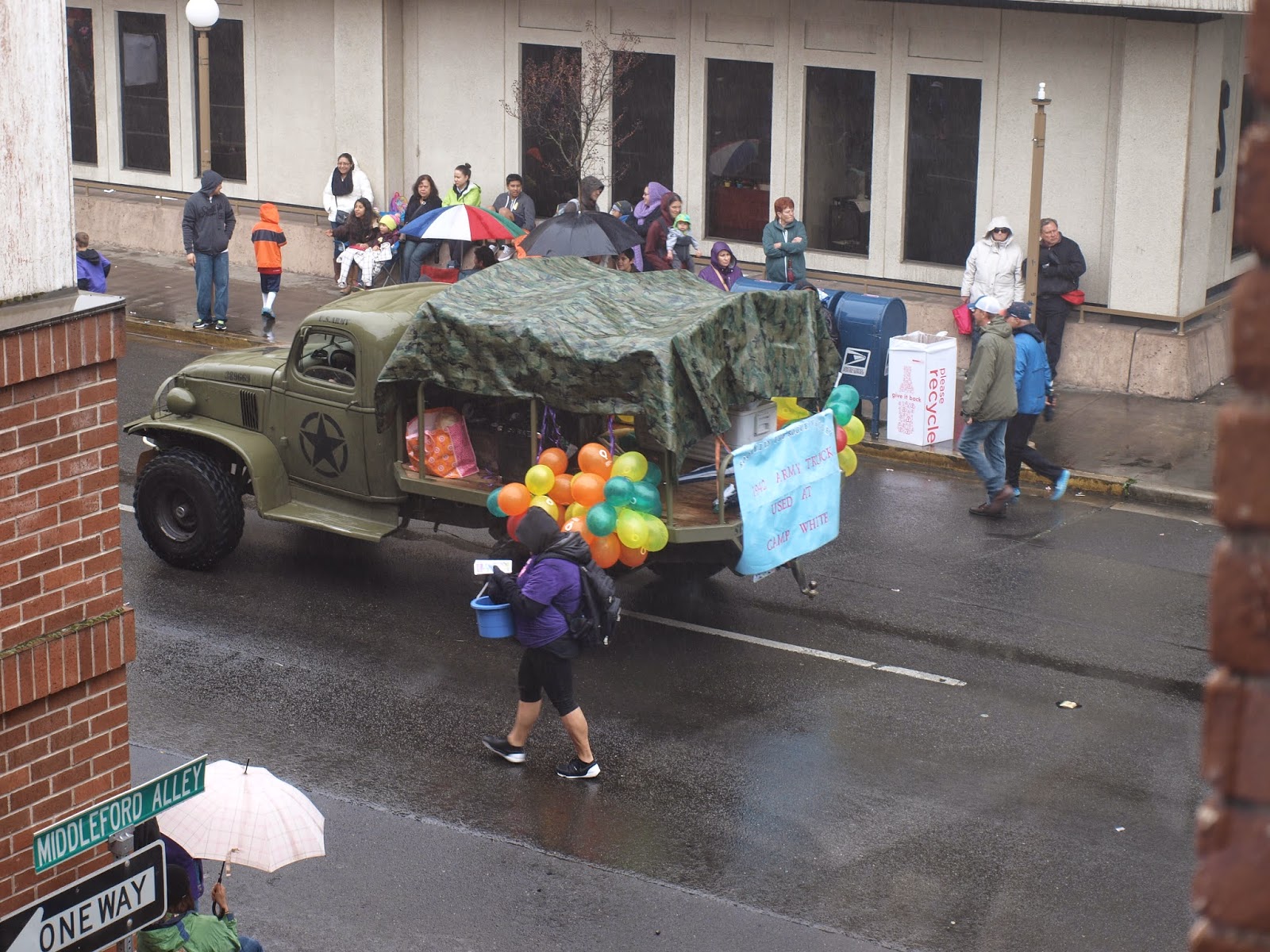 SGE regular Chris Darland snuck his latest daily driver into the festivities via its link with local history: Before Darland revitalized it with late model running gear, the Deuce-and-a-Half served at Camp White Army Base during WWII. You care because Camp White hosted our area's first drag strip. Darland drives the truck everywhere and claims it to be the best parts hauler he's ever had, which is saying something. 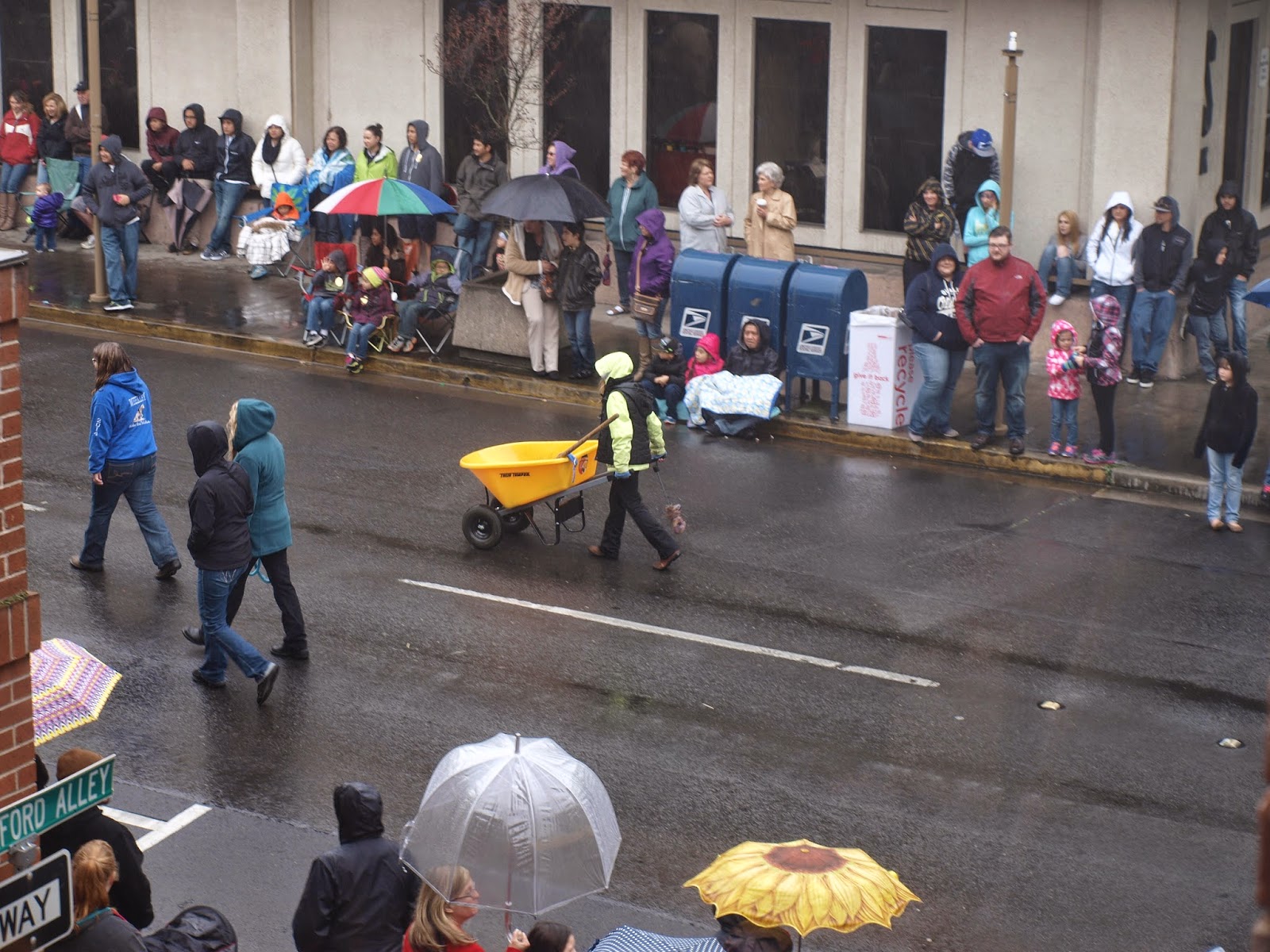 I was trying to work during the parade, so I missed a few photo ops, like Grand Marshall Jim Belushi, and a flock of the 2014 Pac-12 Champion Oregon Ducks football team. But I caught the grand finale: The anonymous horse shit scooper received huge cheers from the diehards who stuck it out to the bitter end. No one knows her name, but all agree she was the town's greatest hero on this day. Bottom line: Small town America is still kicking. It's nice to be a part of something, and this was a sweet reminder that "community" means more than just our little gearhead microcosm. Be true to your school, etcetera. (Scotty shots) 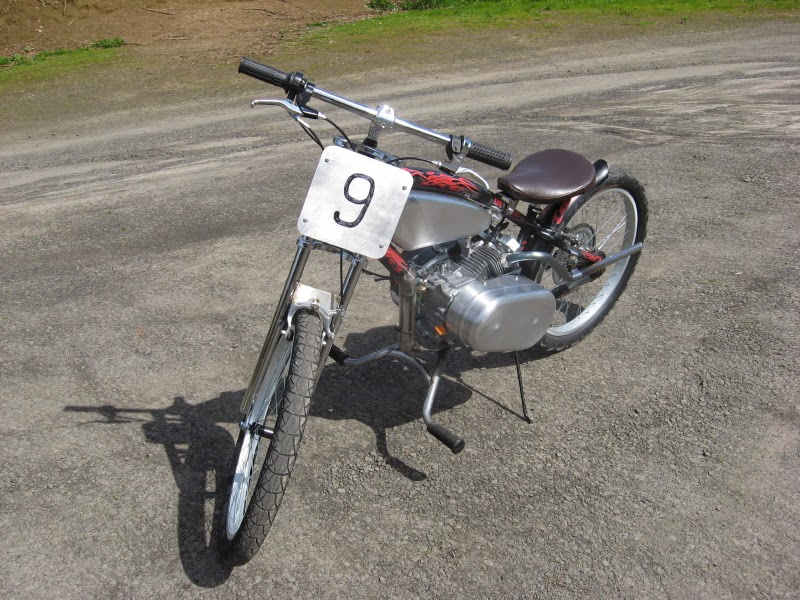 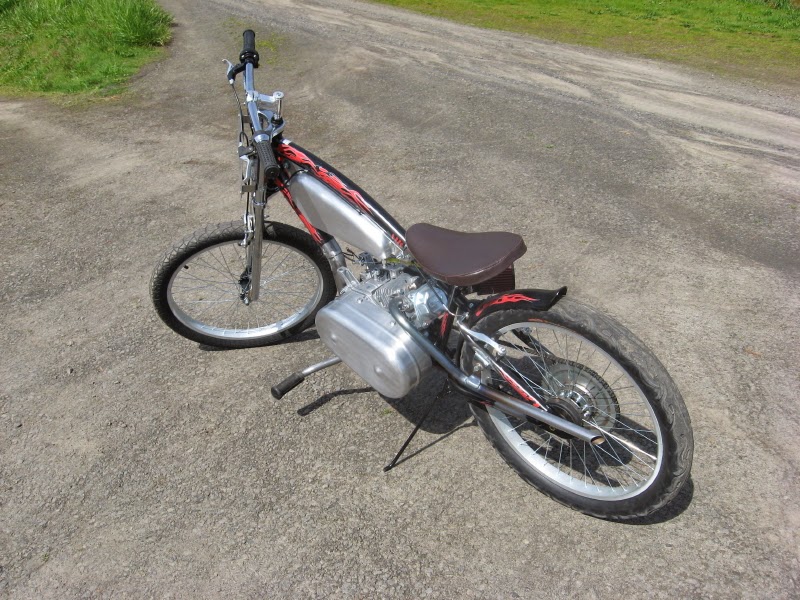 This just in from Marty Strode, regarding his Stallion motorbike project, destined for pit duty at this year's Bonneville Speedweek: "I took a few rides today. It runs great. I'm off to the Portland Swap Meet, then back to getting it ready for the (dark maroon) finish paint, this weekend." The Stallion has go to match the show: Engine is a 212cc Honda copy from Harbor Freight (available for about $100). Marty confides, "With the torque converter, it has great low-end power and plenty of top speed." 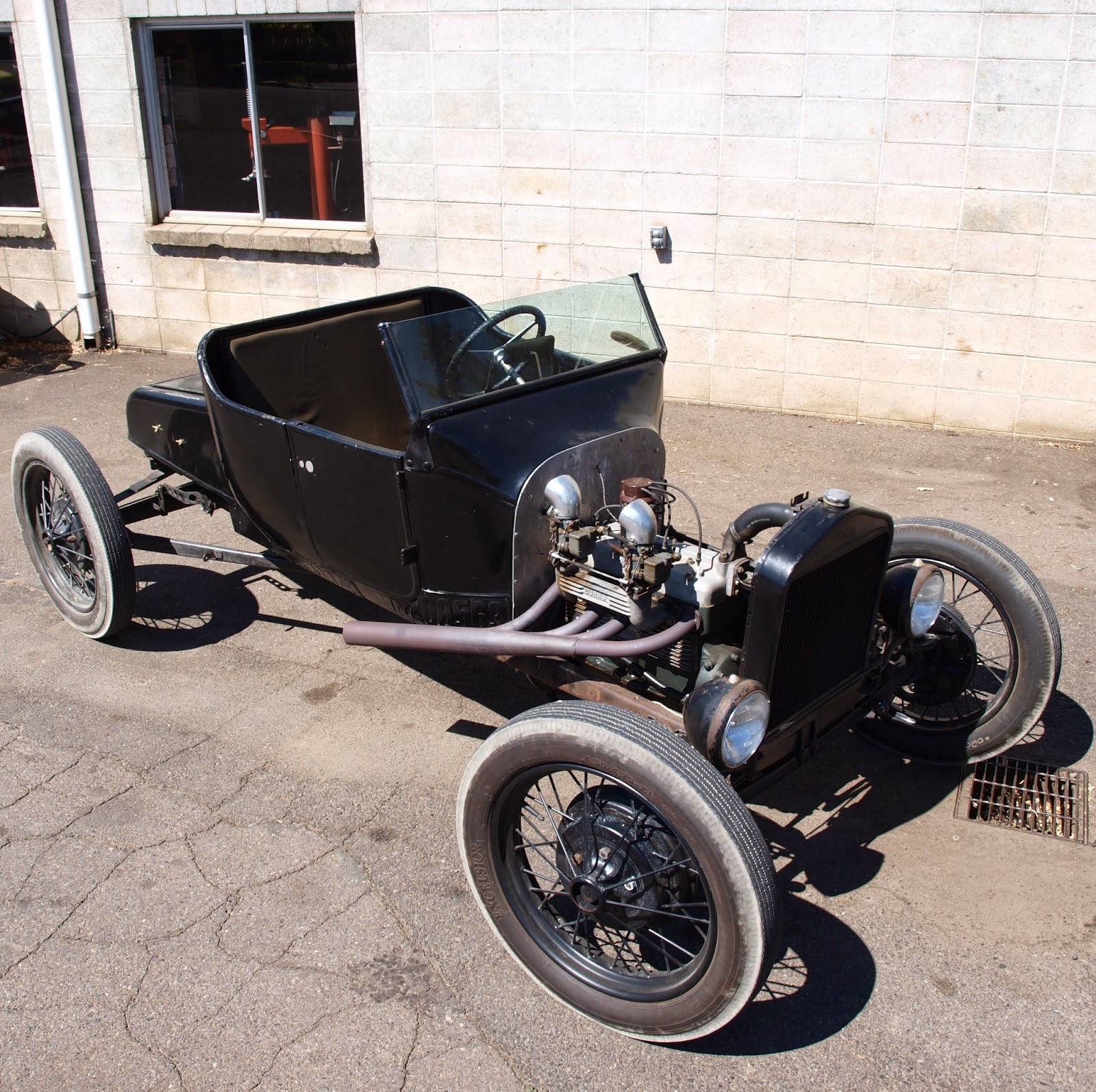 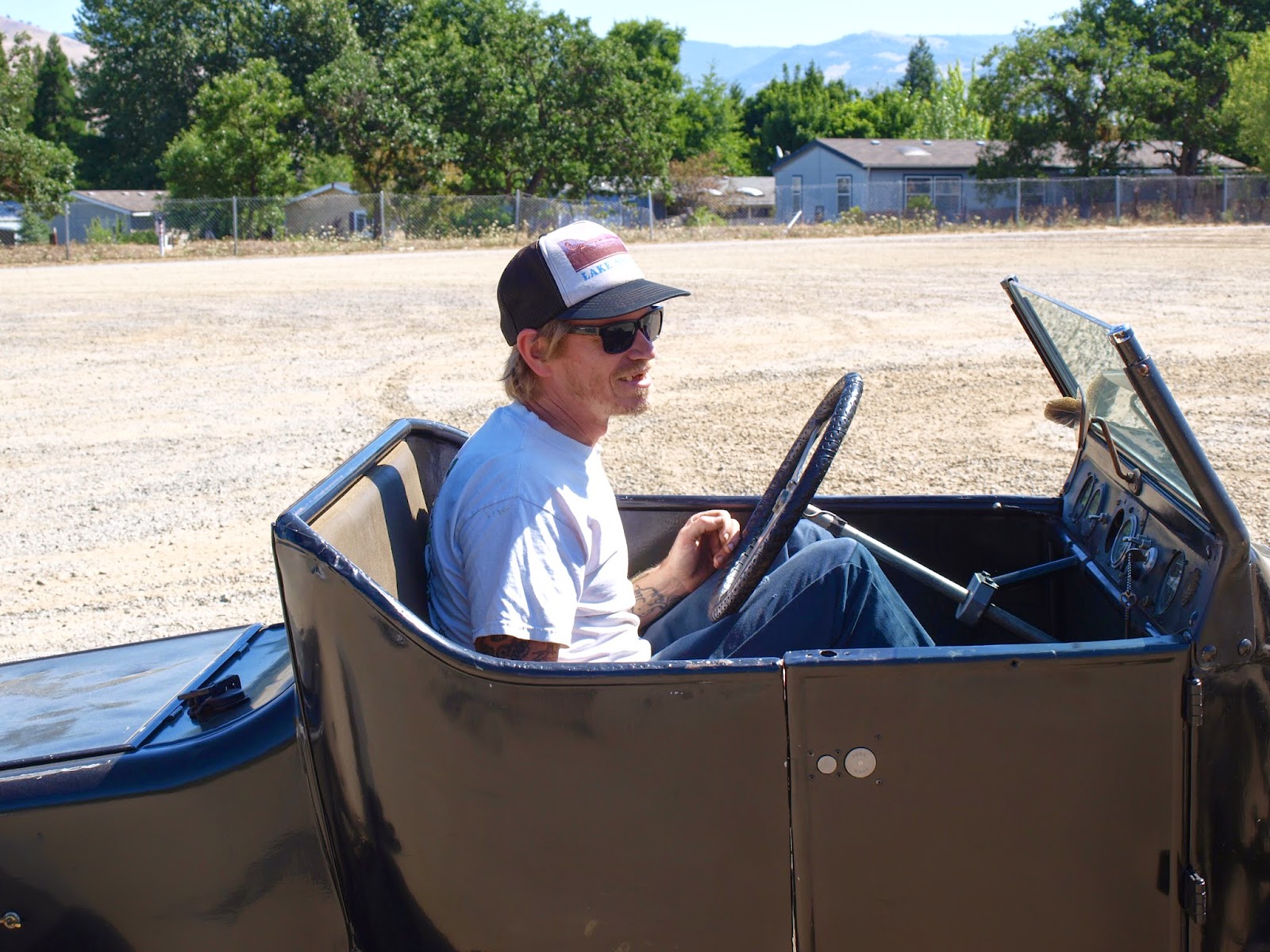 SGE semi-regular Gary Mathis (seated) sent his T roadster to England last year (covered on this blog), then luxuriated in the decadence of his '46 sedan while gobbling up freeway miles. Gary must have a new project underway, as we recently received word that the sedan is now down the road. (Scotty shots) 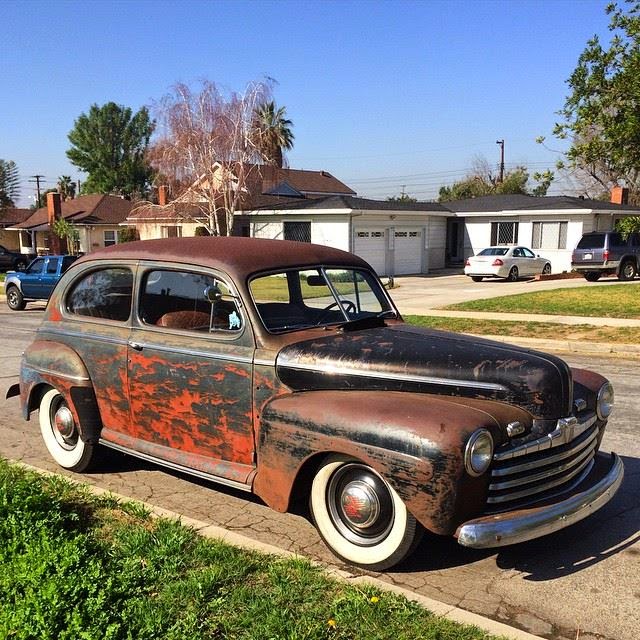 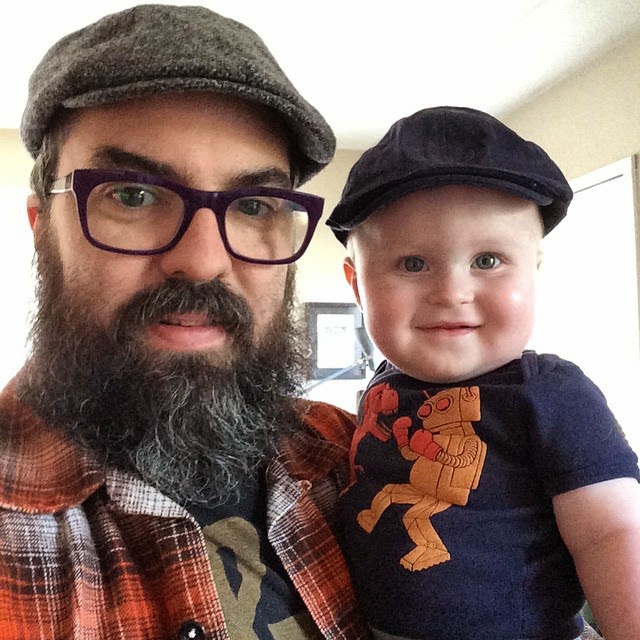 The Mathis '46 is now parked in front of celebrated lowbrow artist Chris Cooper's house in California. "Coop" and son Lil Coop (without beard) needed a reliable family car, and the old Garymobile is the perfect choice for the job. Bonus: It's Navarro-approved. (Photos courtesy of Coop) 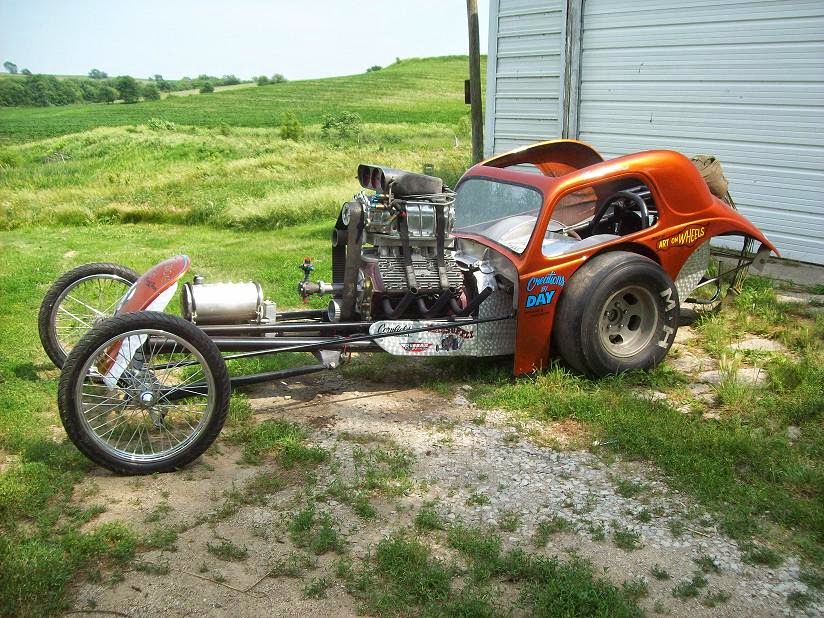 SGE regulars Tim Jones and Beth Main checked in last week from Panama, Iowa. We've been hoping for some action shots of their Comp Coupe, but as they were preparing it for their local spring opener, the driver (Beth) inexplicably broke her neck! 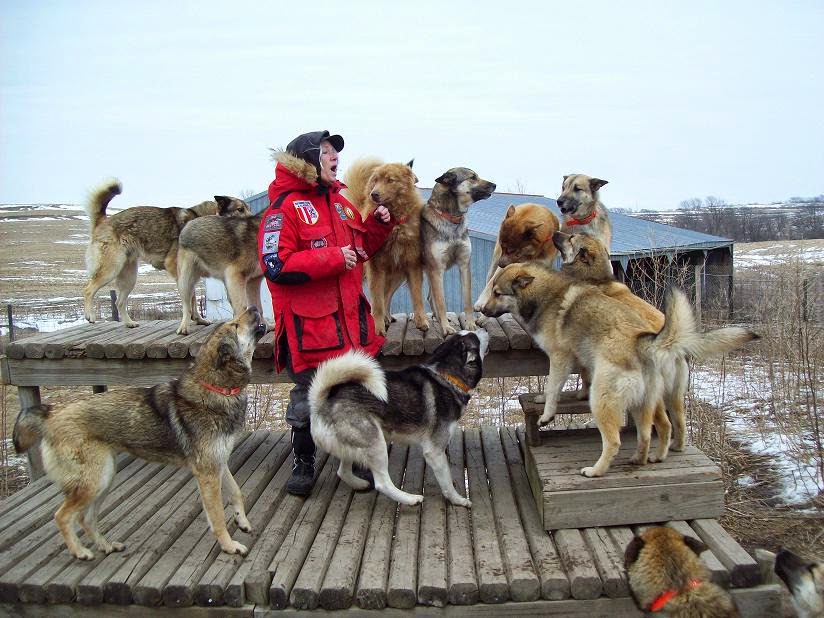 The injury may have occurred while going for a high note with her sled dog team, which doubles as the Panama, Iowa Choral Society (shown here in dress rehearsal). Tim narrates: "We're still not sure how or when she did it. She was having neck pain and went to the doctor. Found out she broke the C-1 vertebrae. She was told not to race the car or the sled team for a year. She's not a good patient. Went fishing a week after surgery, and ran the dogs last winter." 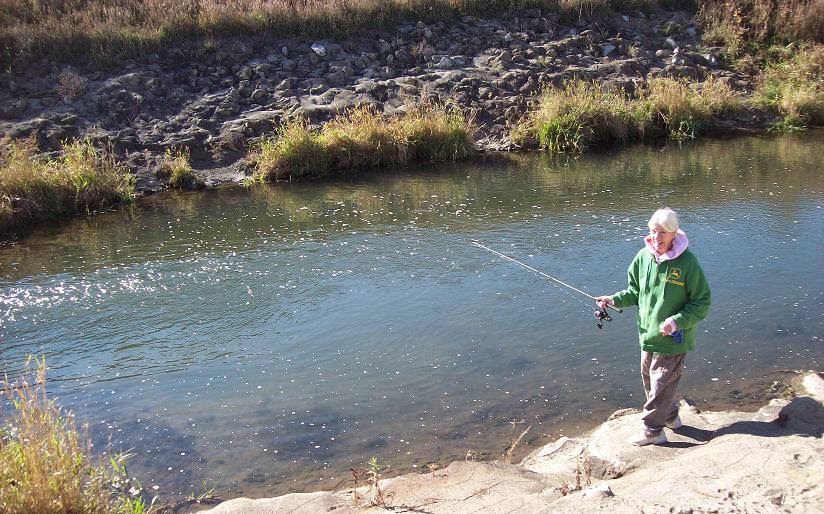 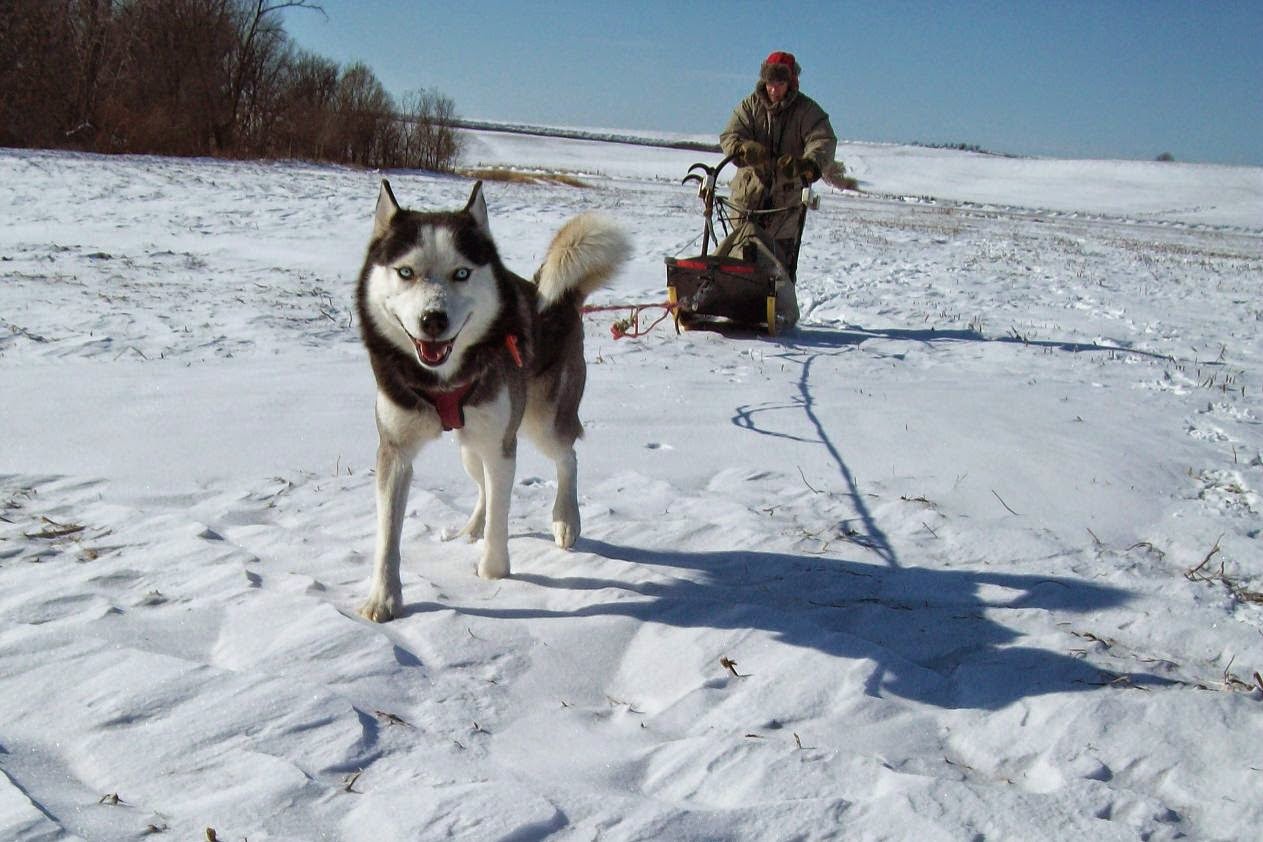 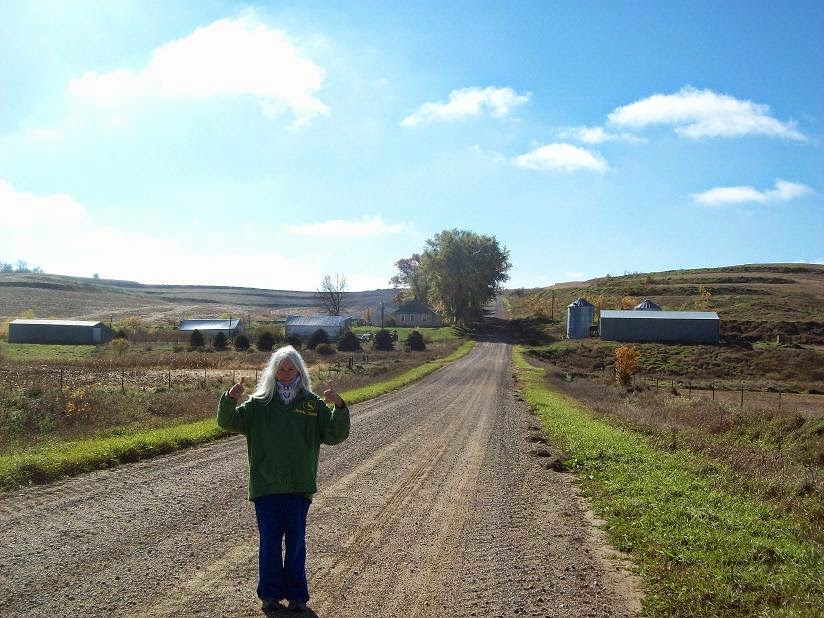 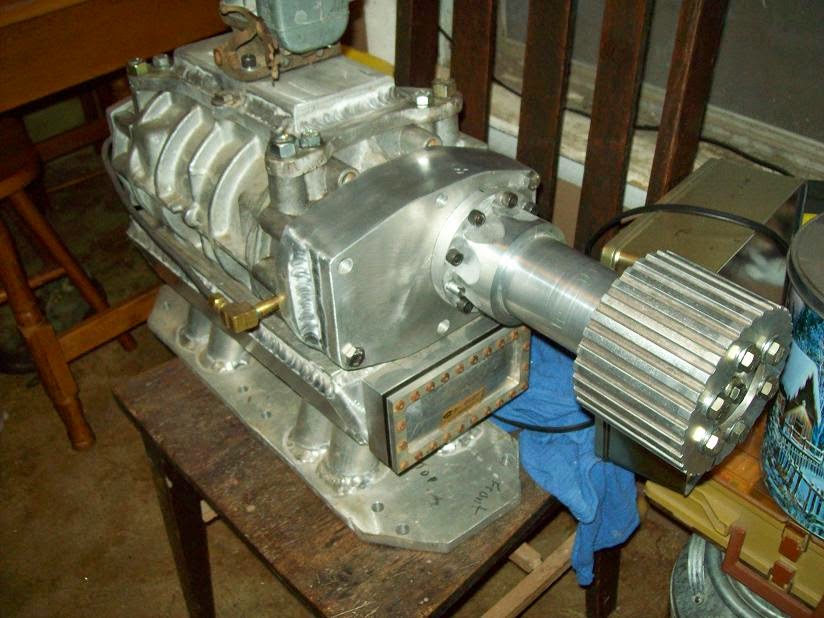 Beth and Tim are using the down time wisely: "Beth had been working on a 4-53 blower (more old timey than our current 6-71 set-up), so we figured now we have time to finish it." And so they did, complete with a home-made drive assembly! Well worth one lousy vertebrae. (Photos courtesy of Tim Jones)

No Model A updates this week (due to recording studio logistics), but my old race car made the news again. My would-be masterpiece build was sold under duress on the cheap ($3K), to racer pal Rick Smith, who ran it for a couple of seasons, then offed it to Rich Feicheer, who got the thing down into the 8's (it was designed to run C/Gas on a 10.60 index)! It came up for sale last week for $21,500. Odd to think that something I cobbled together on a shoestring could demand such a price. I'm kind of flattered, though Craig Wallace and Rick Smith nicely finished the roughed-in car upon taking delivery from me. (Scotty shot) 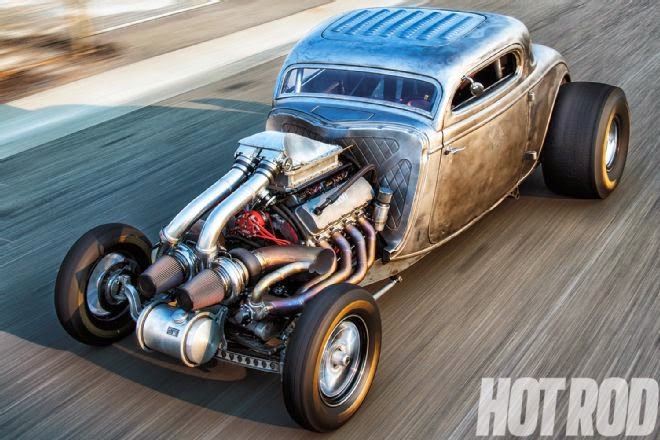 Feicheer is better known for his '34 coupe. For good reason. Still, the old BTU '58 Anglia has been keeping pretty impressive company. We'll be watching to see what happens to it next. (Photo courtesy of Hot Rod magazine) 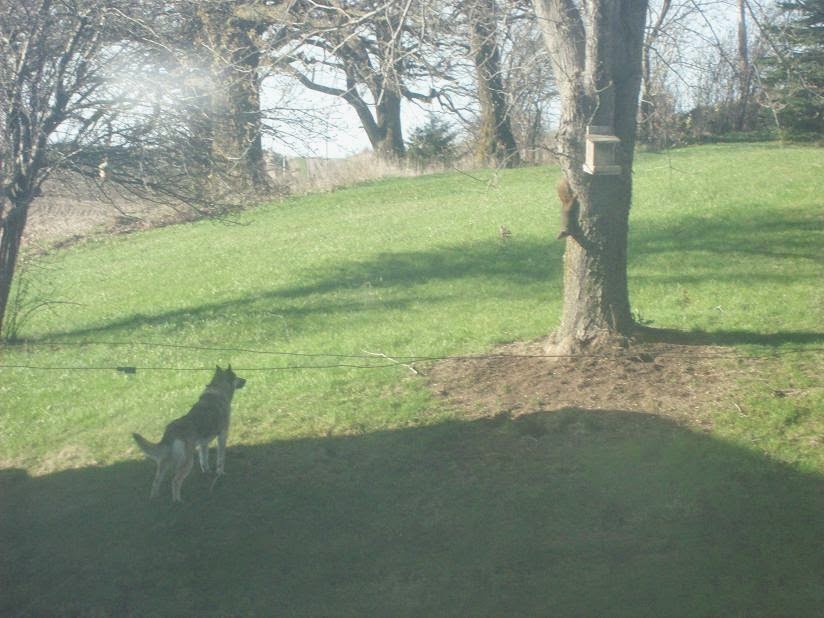 Iowa sled dogs don't just sing and race. They also take a daily census of the squirrel population around the farm. Give a wrong answer on the census, and the chase is on! (Photo courtesy of Tim Jones) 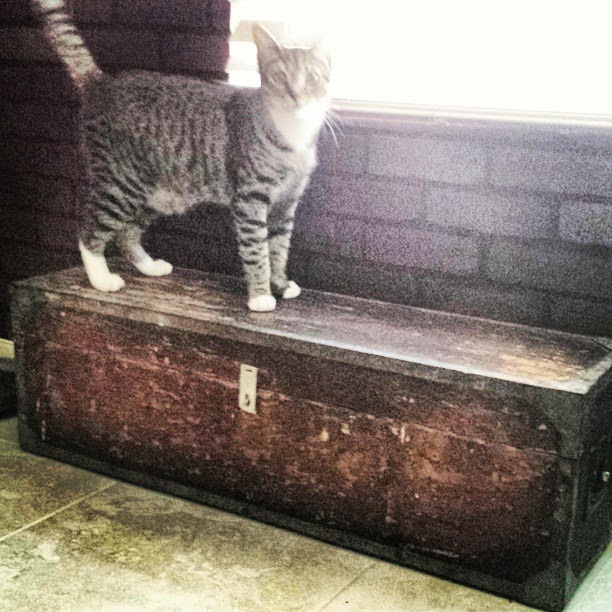 This is Sebastian, out for a stroll on his daddy's prize toolbox. We can't tell you who Sebastian's dad is, but we can tell you it's venerated hot rod artist Jimmy Smith. (Photo courtesy of Jimmy Smith) 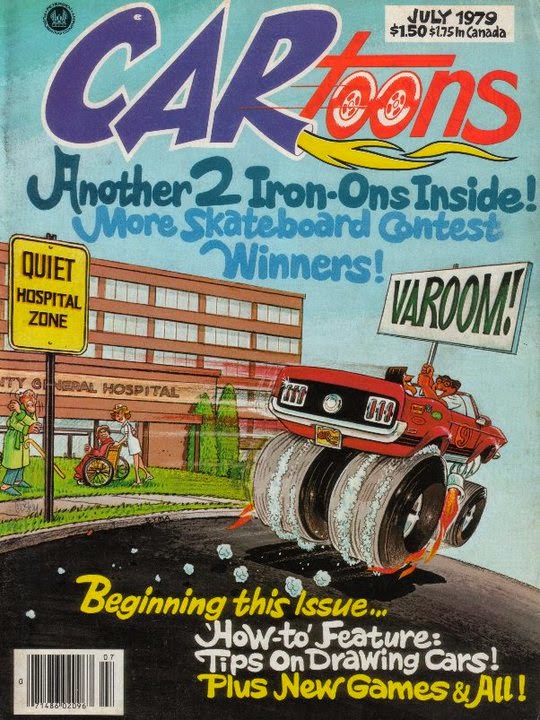 For Beth Main. Please take care of yourself and get in that race car seat ASAP! If need be, perhaps the SGE Nation can band together and help you get a HANS device.