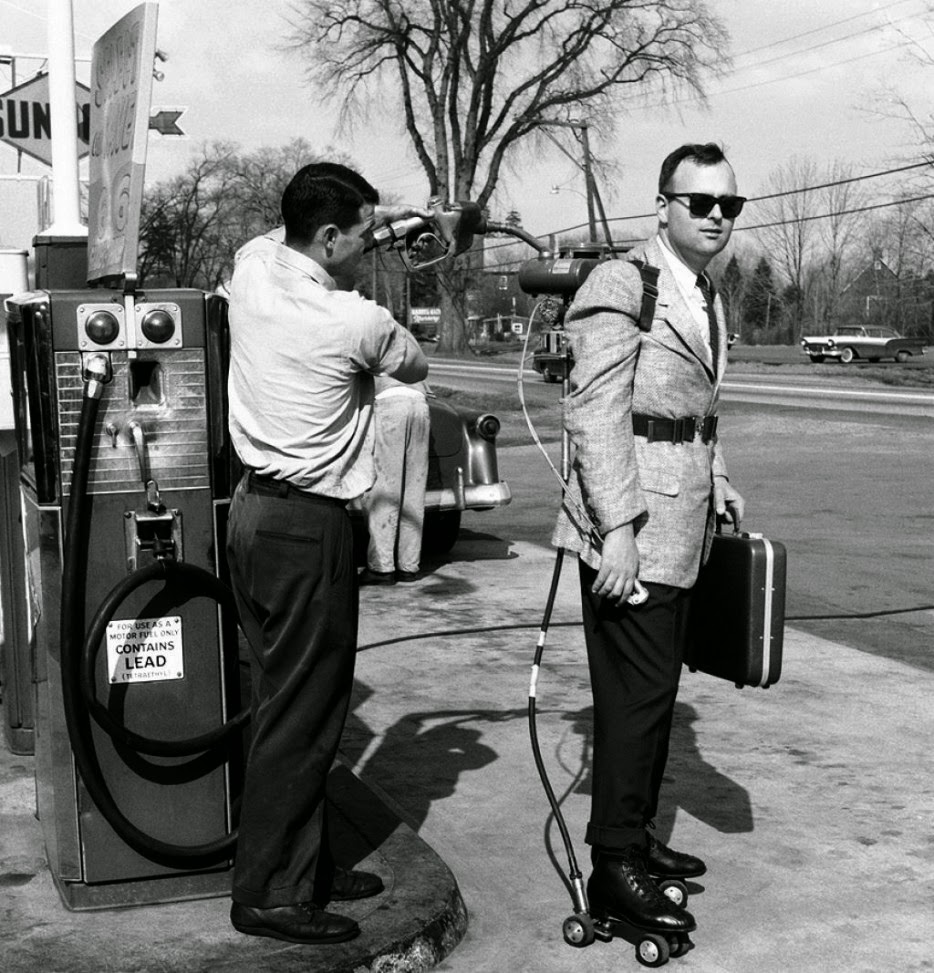 It's been a hectic week. But thanks to my motorized roller skates and plenty of Sunoco High Test, I didn't miss a thing on my beat.

With our vast tentacles wrapped around the globe like a slimy atomic squid hug, it's no wonder that SGE is Planet Earth's news source of choice. After all, only SGE reports the stories that the mainstream media doesn't want you to know about. How do we do it? SGE co-founder Edward R. Murrow whipped up the recipe decades ago: Clean living, fancy footwork, and the golden rule: The more mundane the story, the more sappy the headline. This concrete tenet served Murrow well at CBS News, still sells countless copies of the New York Post, keeps AOL in the money, and alerts millions of the SGE faithful to the news that matters to them. Consequently, our credibility is unquestioned, our sources trusted, and our word is gospel. Thanks, Ed. 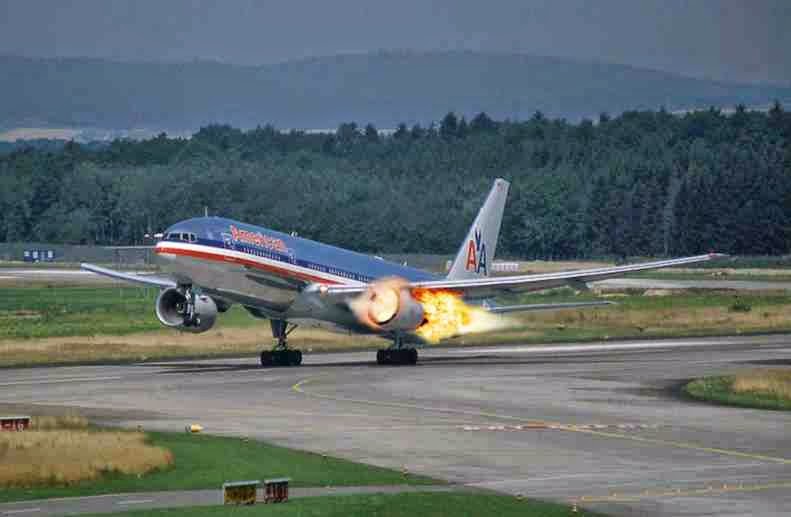 Dallas, Texas. Perhaps envious of co-conspirator Brian Lohnes' omnipresence in the Big Show, Bangshift honcho Chad Reynolds made this melodramatic entrance at Dallas-Fort Worth airport. Unfortunately, Reynolds had just left Dallas minutes before, bound for Tulsa, and the "Throwdown in T-Town" race. Barely into the ascent, the right engine blew its brains out, as the left engine hiccuped, but miraculously clung to life long enough to get American Airlines flight 2287 back to DFW. Reynolds sported a Bangshift T-shirt for TV reporters at the scene and even spammed the Throwdown event on camera. Read Reynolds' gripping firsthand account (at http://bangshift.com/general-news/chadmouth-2/kick-rods-1000-feet-completely-different-set-consequences-plane-almost-died/) before it's confiscated by the FAA, who are investigating whether Reynolds' onboard heroics saved hundreds of lives, or his enormous cache of personal electronics actually triggered the engine failures. (Photo courtesy of KJRH TV) (Thanks to Ronnie Mankins) 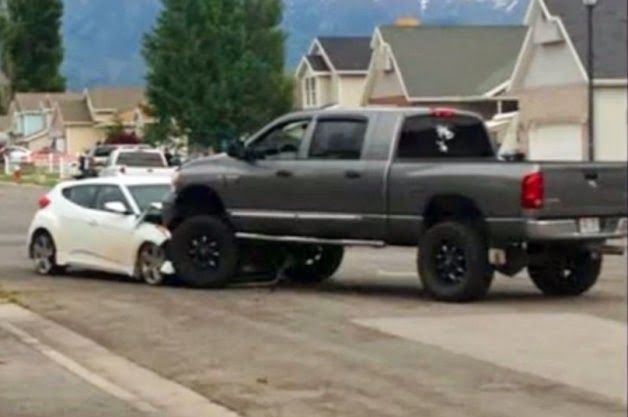 Utah, USA. When Bryson Rowley realized a highspeed joyrider was using a stolen Hyundai Veloster to terrorize the children playing in Rowley's urban Utah neighborhood, instincts took over and vigilante justice was served. Rowley sacrificed his Dodge Ram's front bumper, but the perpetrator was stopped and taken alive. As of today, Rowley himself has not been charged. In fact, the local community raised funds to buy him a new bumper from Fusion Bumpers, who shipped it for free. The incident has proven controversial enough to split the town into two camps, with half hailing Rowley as a hero, and half deeming him equally as dangerous, threatening, and guilty as the speeding car thief. What say ye, SGE Nation? (Photo courtesy of KSTU News) (Thanks to Motormouth Ray)

HOUND GOES ROUND AND ROUND, AVOIDS POUND WHEN ORGANIC SOLUTION FOUND: 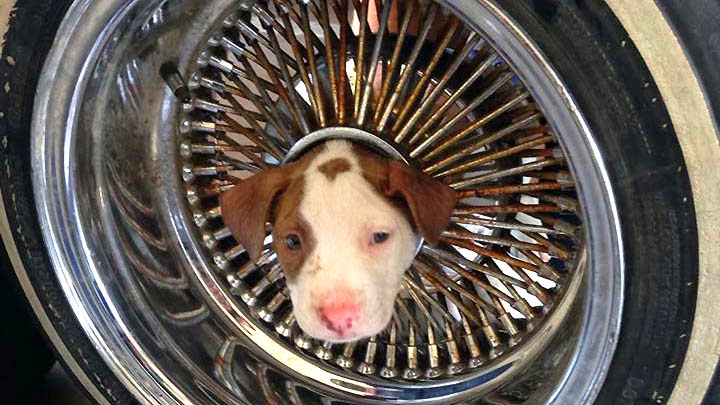 Bakersfield, California. This is Junior. His owner declined comment on how his head got stuck in this wheel, but he did take Junior and the wheel to his local Kern County Fire Station, where two firefighters employed vegetable oil to free the puppy, according to Fire Department spokesman Brandon Hill. Junior is fine and is recuperating at home with his owner and seven siblings. (Photo courtesy of KTVU News) (Scotty gig) 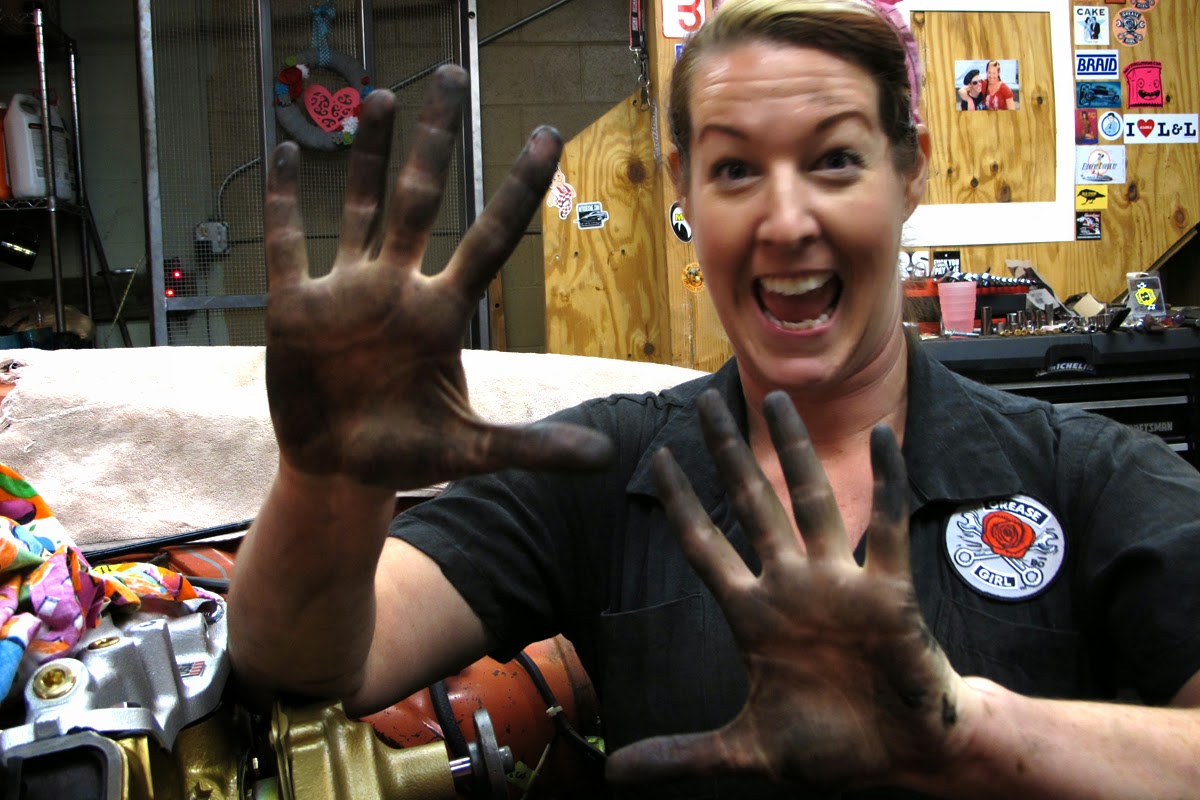 Los Angeles, California. Kristin Cline is no stranger to hard labor, nor to this blog. She and her '55 Studebaker have been considered regular cast members here for years. But we've never seen her quite this animated before. 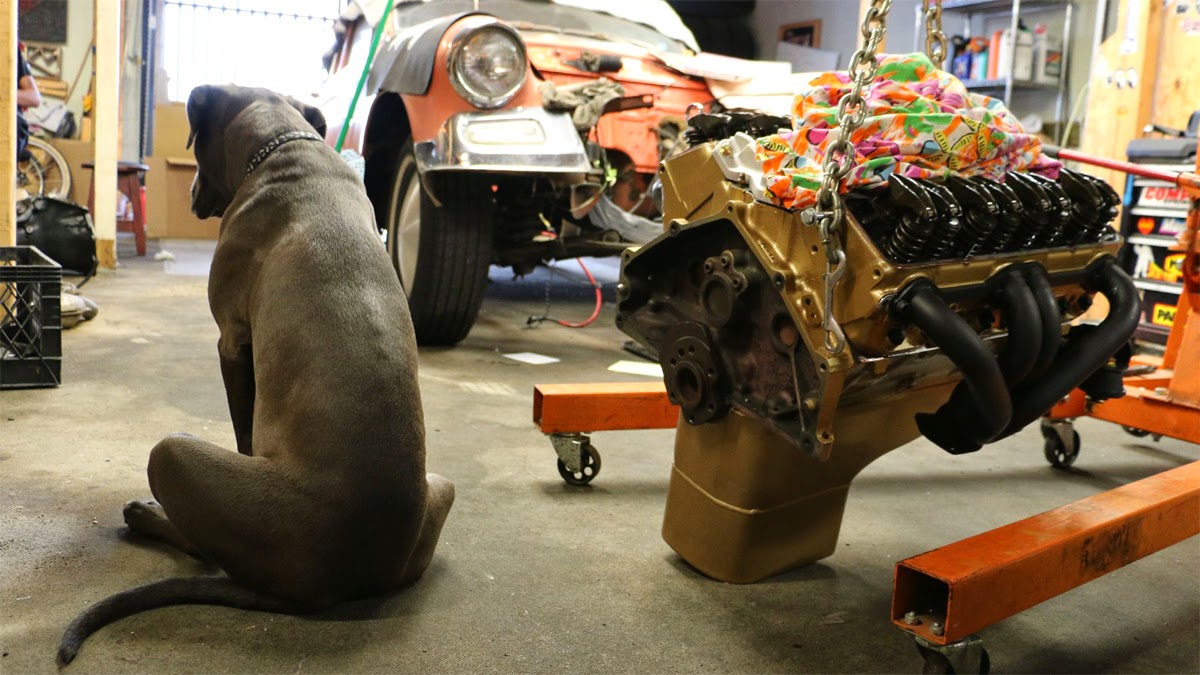 After months of trial, tribulation, and threat of tetanus, Cline's wonderfully overcammed smallblock Chevy is finally ready for action again. As Cline and crew take a well deserved break, the golden bowtie awaits its date with destiny. 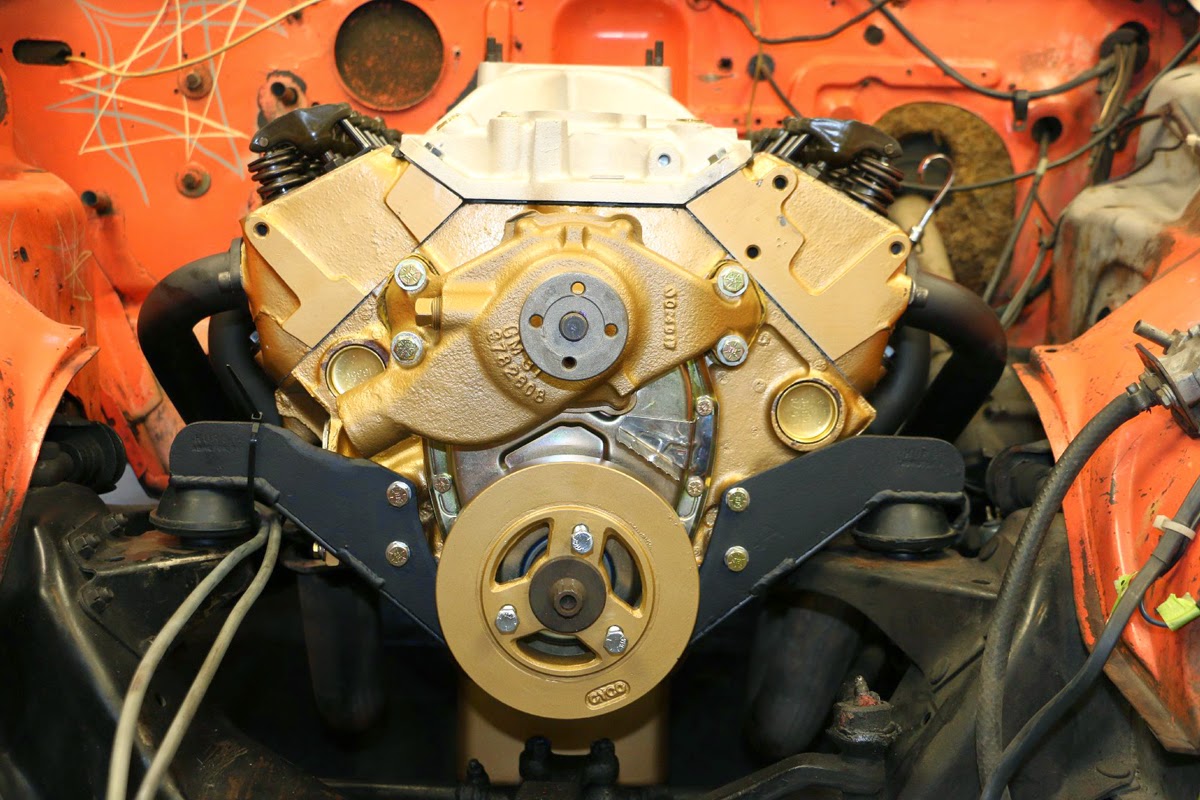 As detailed on Cline's SGE engine build feature, the gold pigment is intended to acclimate the engine bay with an imminent 331 inch '49 Cadillac powerplant. But even a SBC can toss curveballs: The project stalled as Cline shopped for replacement rubber motor mount biscuits. But C&C Auto Parts in Long Beach knew that '55 to '64 Ford truck units work harmoniously with the Hurst-style saddle mounts. Coma averted. 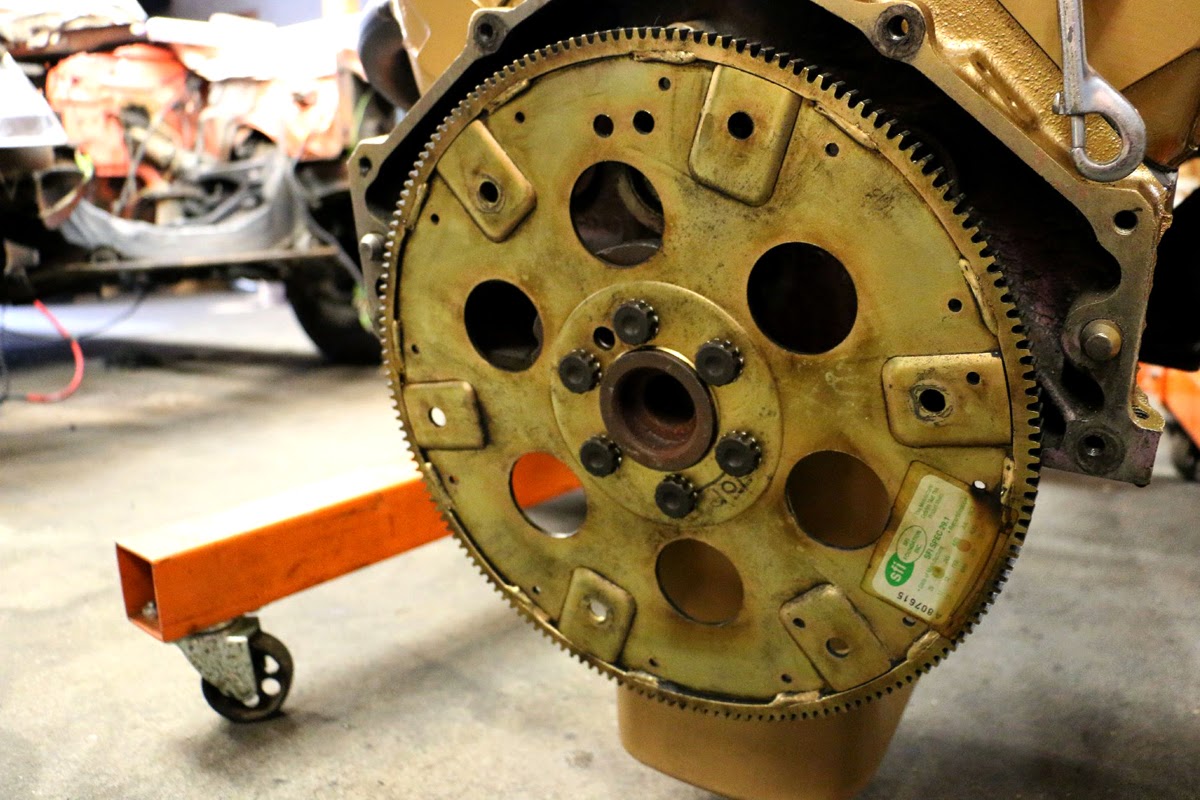 Yeah, the SFI sticker and 12-point ARP bolts belong. You should hear this animal scream. 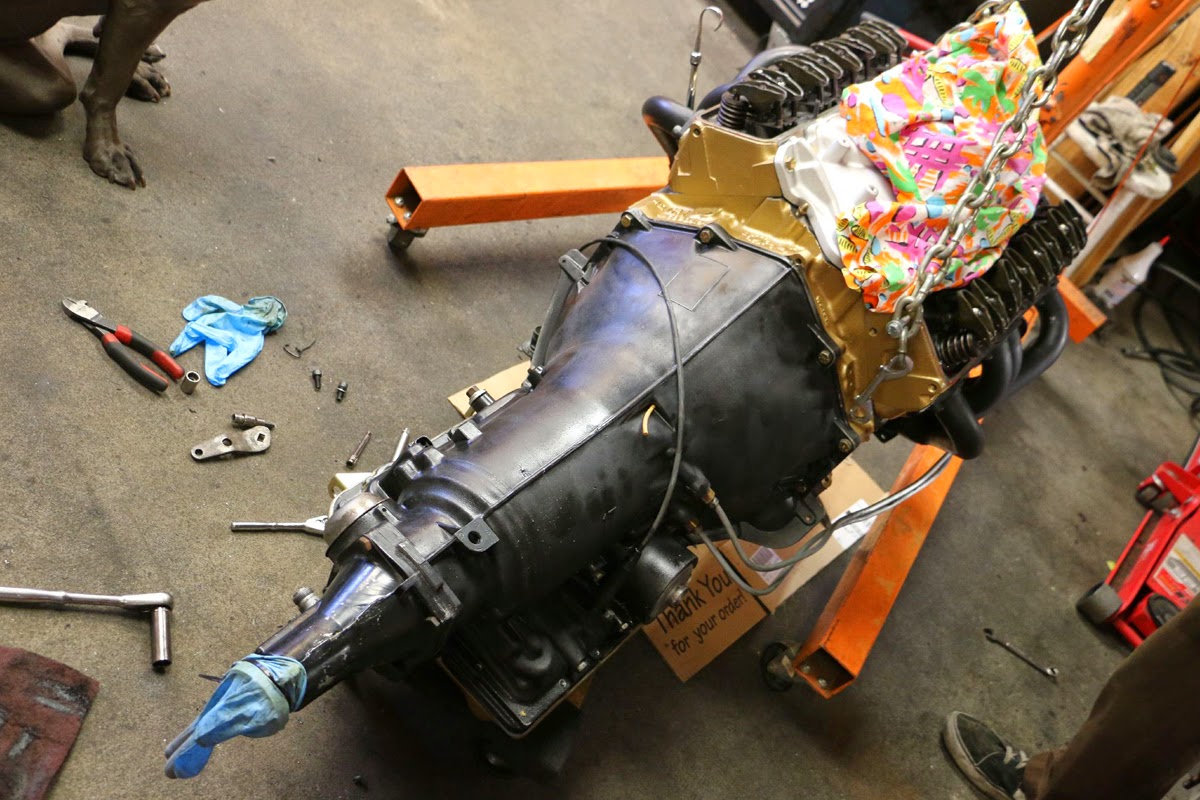 With the 700R4 4-speed automatic snuggled up to the Chevy for the third time under Cline's ownership, the package is once again ready for delivery. 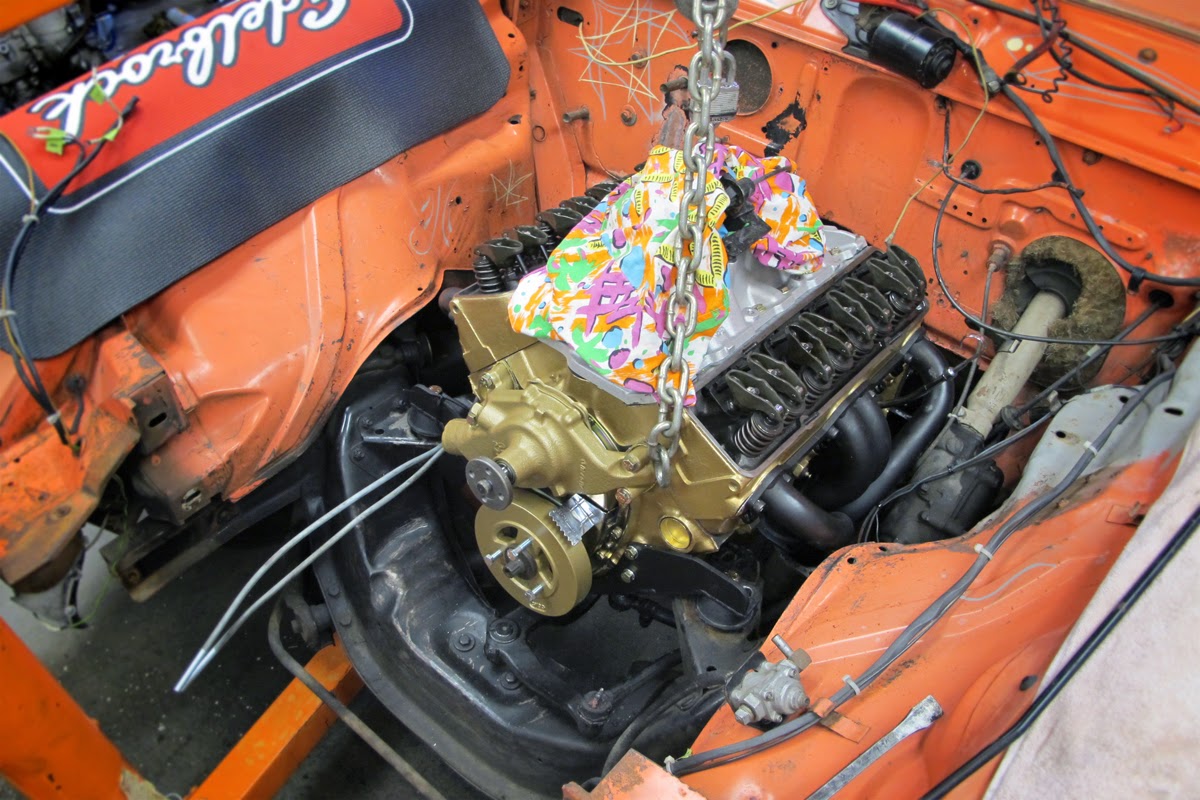 ... and just in time, as Cline will be serving as crewmember on Jerry Hansen's '53 Stude at Speed Week in August and can't arrive on the salt in anything less than a hot rod Stude. Her '55 knows the way there and back, and will doubtless be on autopilot in August. (Photos courtesy of Kristin Cline) (Scotty gig)

MAN DISCOVERS TIRE STORE, THEN IT'S THERE NO MORE: 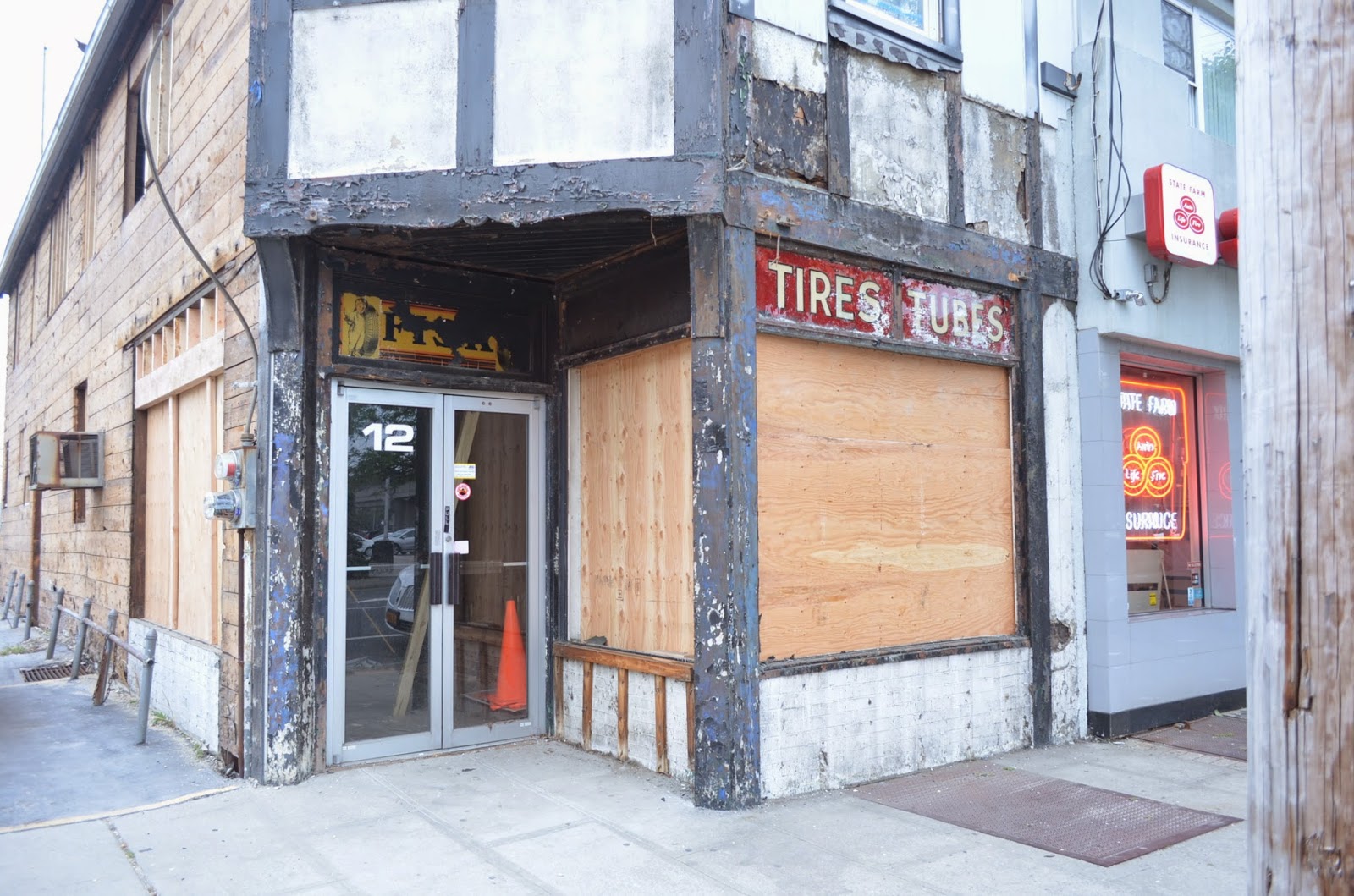 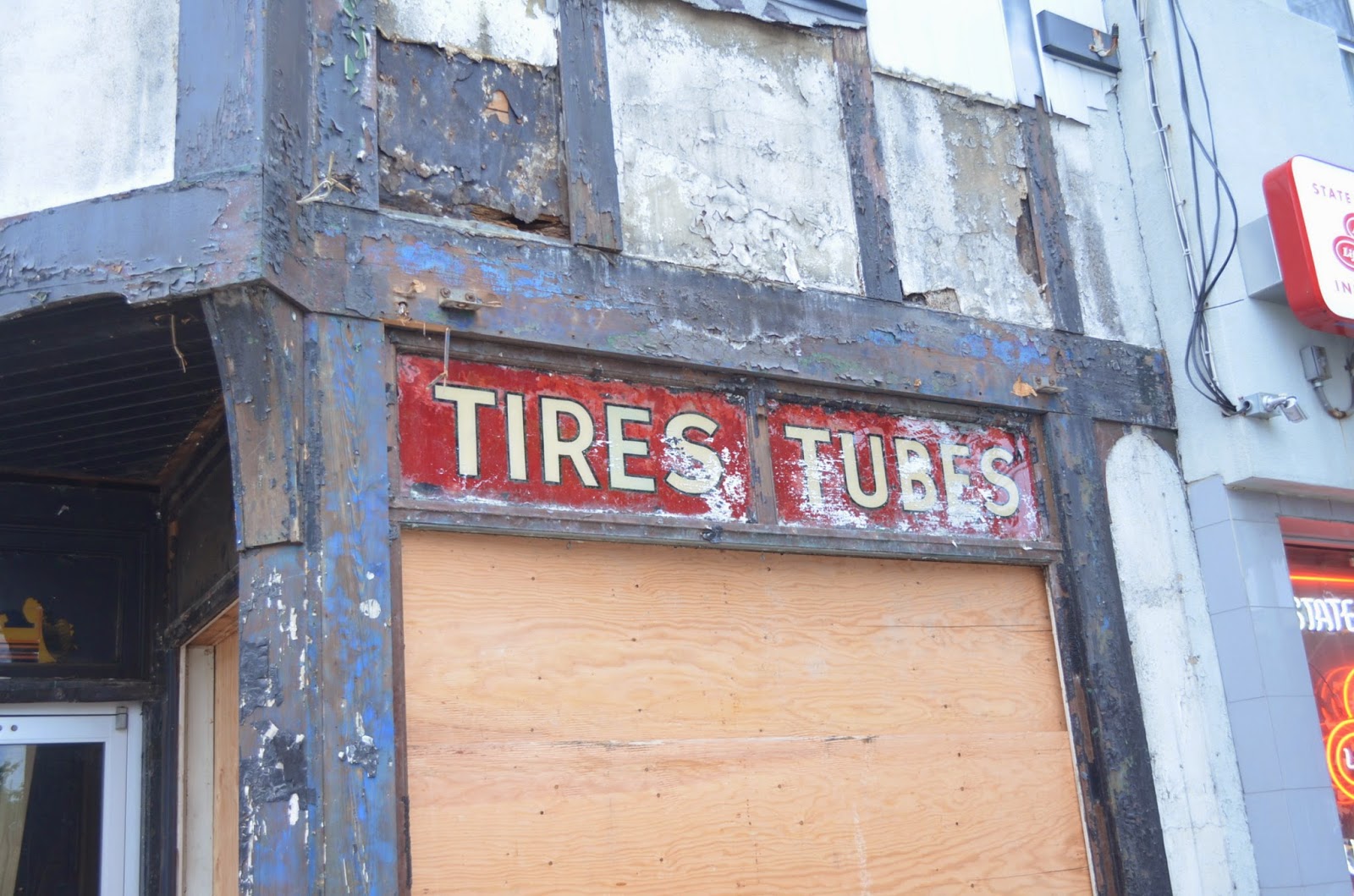 Merrick, New York. Lifelong Long Island resident Raymond Guarino noticed a startling change of scenery in his neighborhood and reacted in textbook fashion by alerting SGE Headquarters: "I noticed that a dry cleaner had closed up shop and a work crew was stripping off aluminum siding, revealing a cool surprise below. It seems this building used to be a tire shop at some ancient time (notice the Fisk signage over the door). I know that Fisk was in business from the early 1900s and was taken over by U.S. Rubber in the 1940s, so this artwork has been up there for a long while. The building is already all covered up, with a sign in the window advertising the new tenant - a mortgage broker. Yawn..." That's how you alert the media to a news flash, kids. Succinct description, historical perspective to establish credibility, and a touch of pathos for color. A+, Guarino. (Photos courtesy of Motormouth Ray) (Thanks to Motormouth Ray)

In local news, I've been testing a new electronic contraption from a Silicon Valley start-up company, code-named "the iphone". That's really how they spell it, but I'm sure they'll have that corrected before the public rollout of the product. It's configured like a cross between a desktop computer and a cellular telephone. There are plenty of bugs to work out (a very challenging piece of equipment to negotiate), but get a load of this: The iphone has a built-in camera! Dick Tracy's crying his eye off. I've been using it to photograph random area curiosities as I encounter them. Below are some of the images I've captured over the last few weeks. Tell your friends you saw it here first: Photographs taken by a telephone! 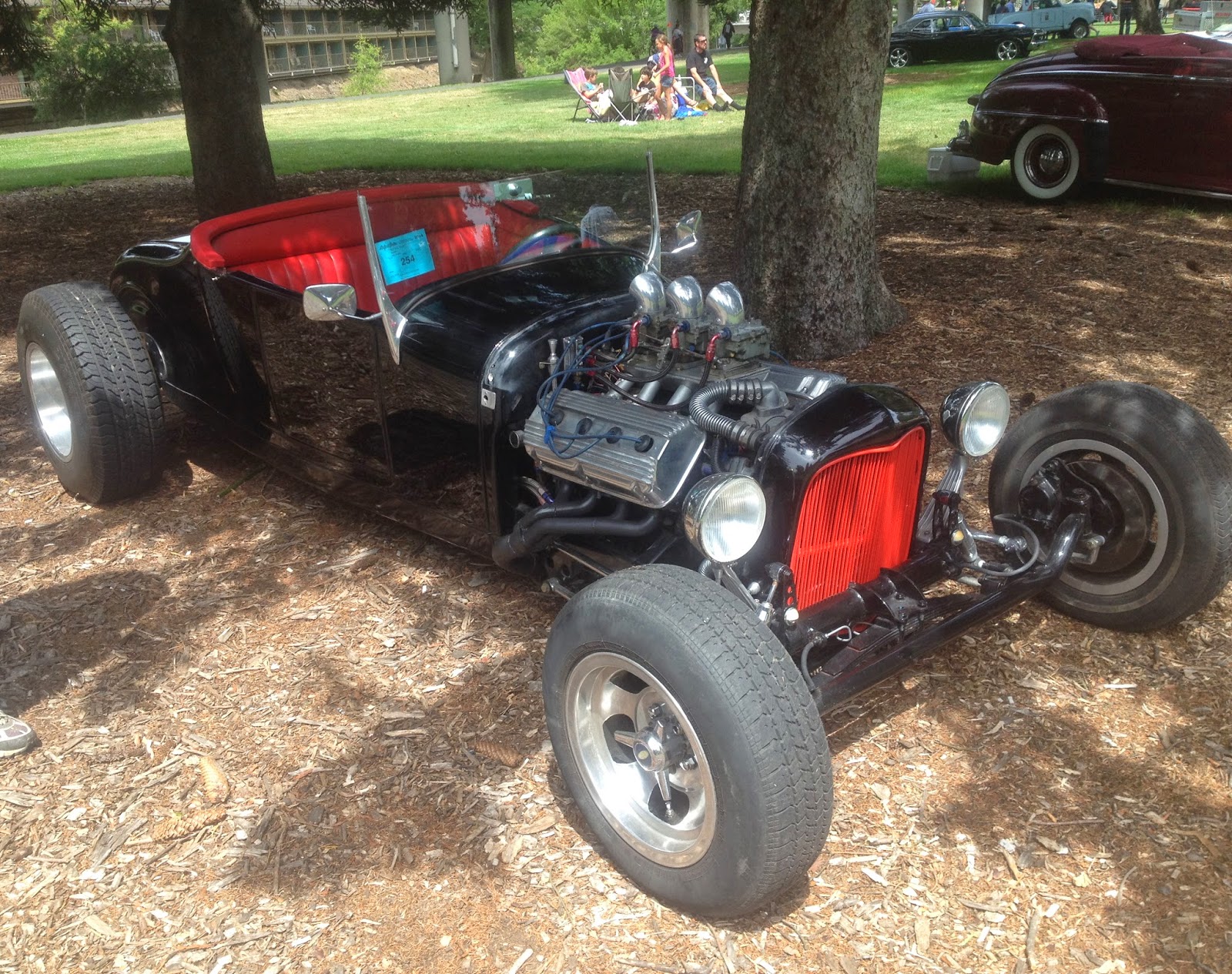 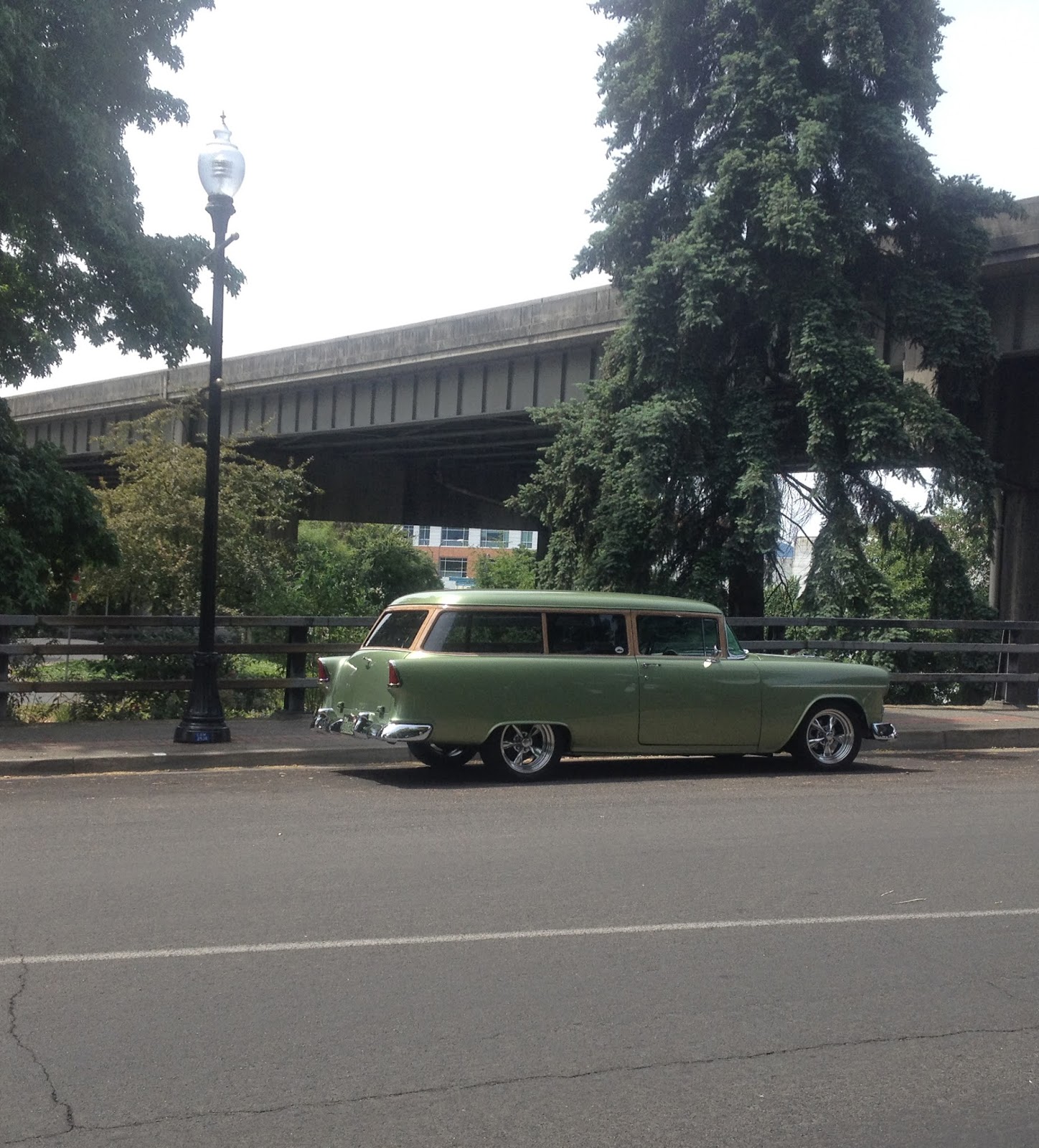 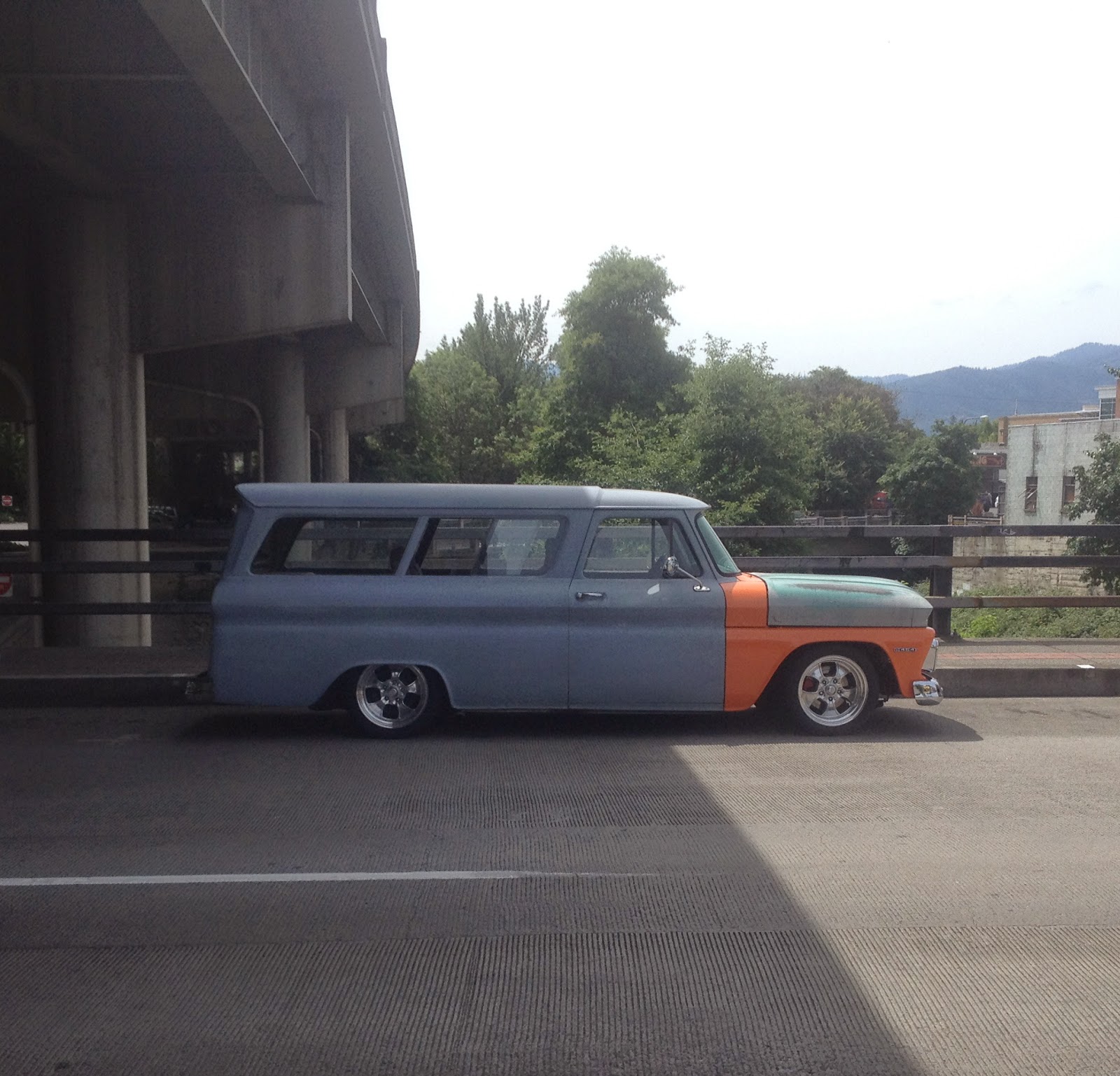 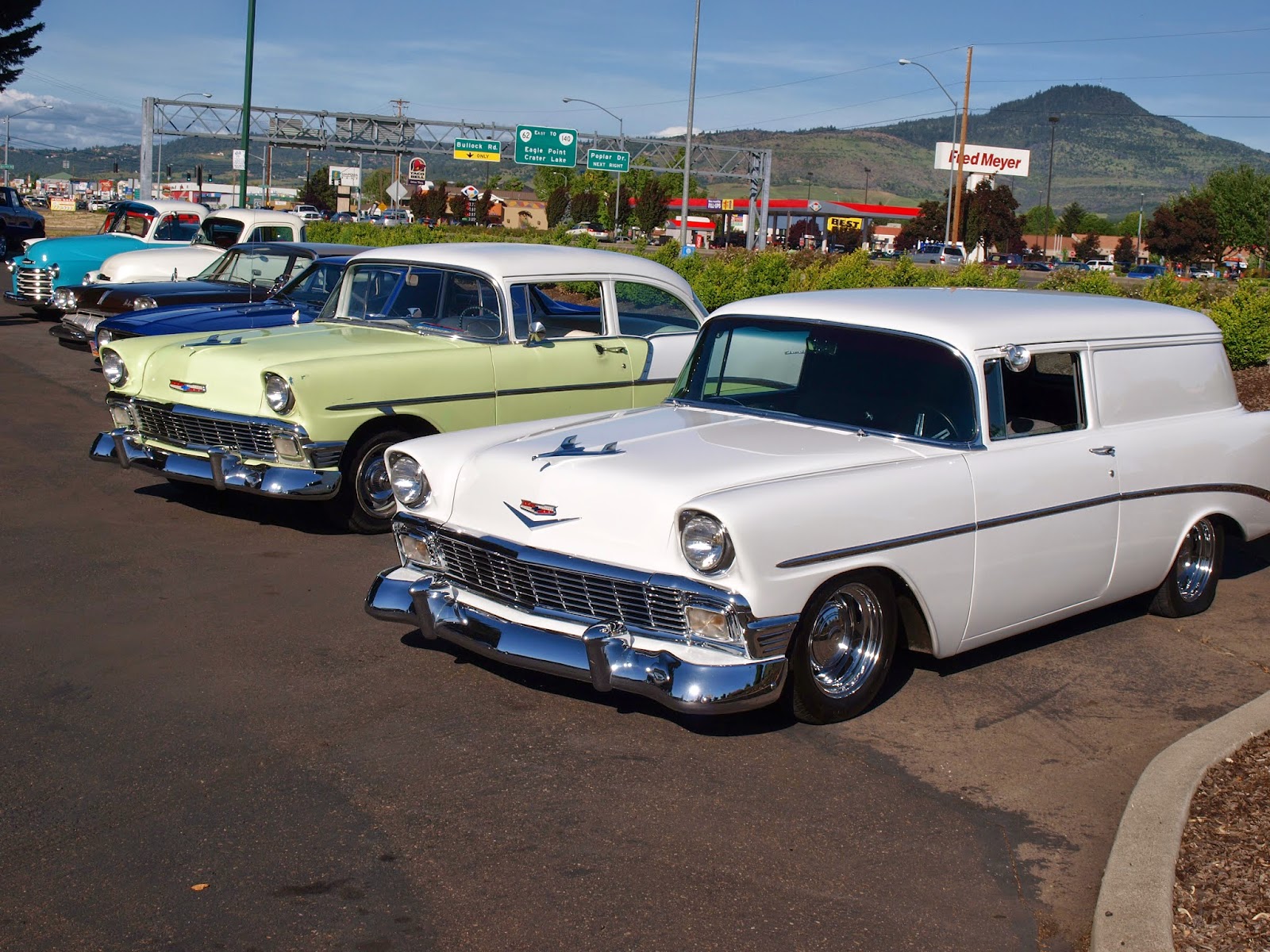 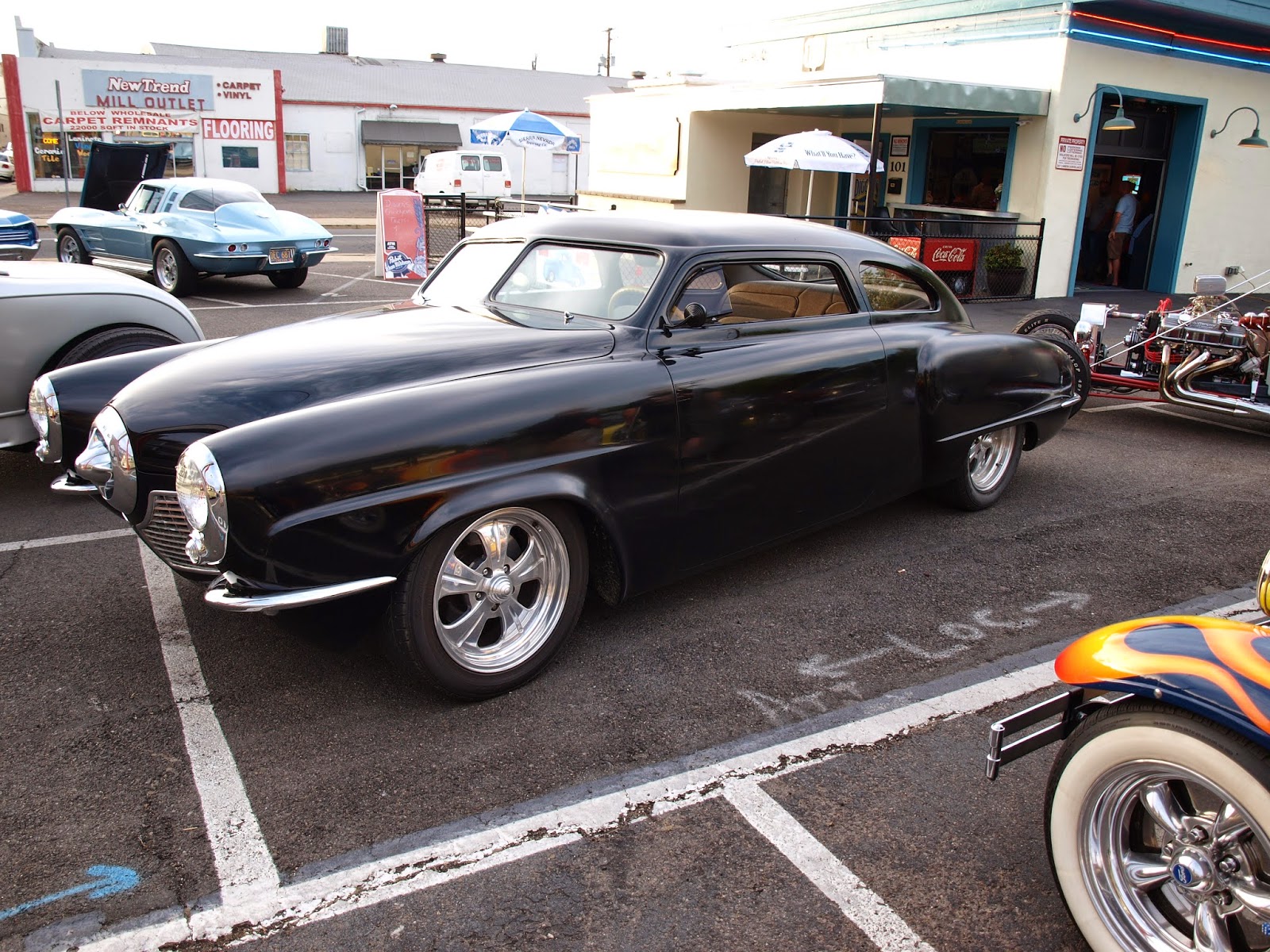 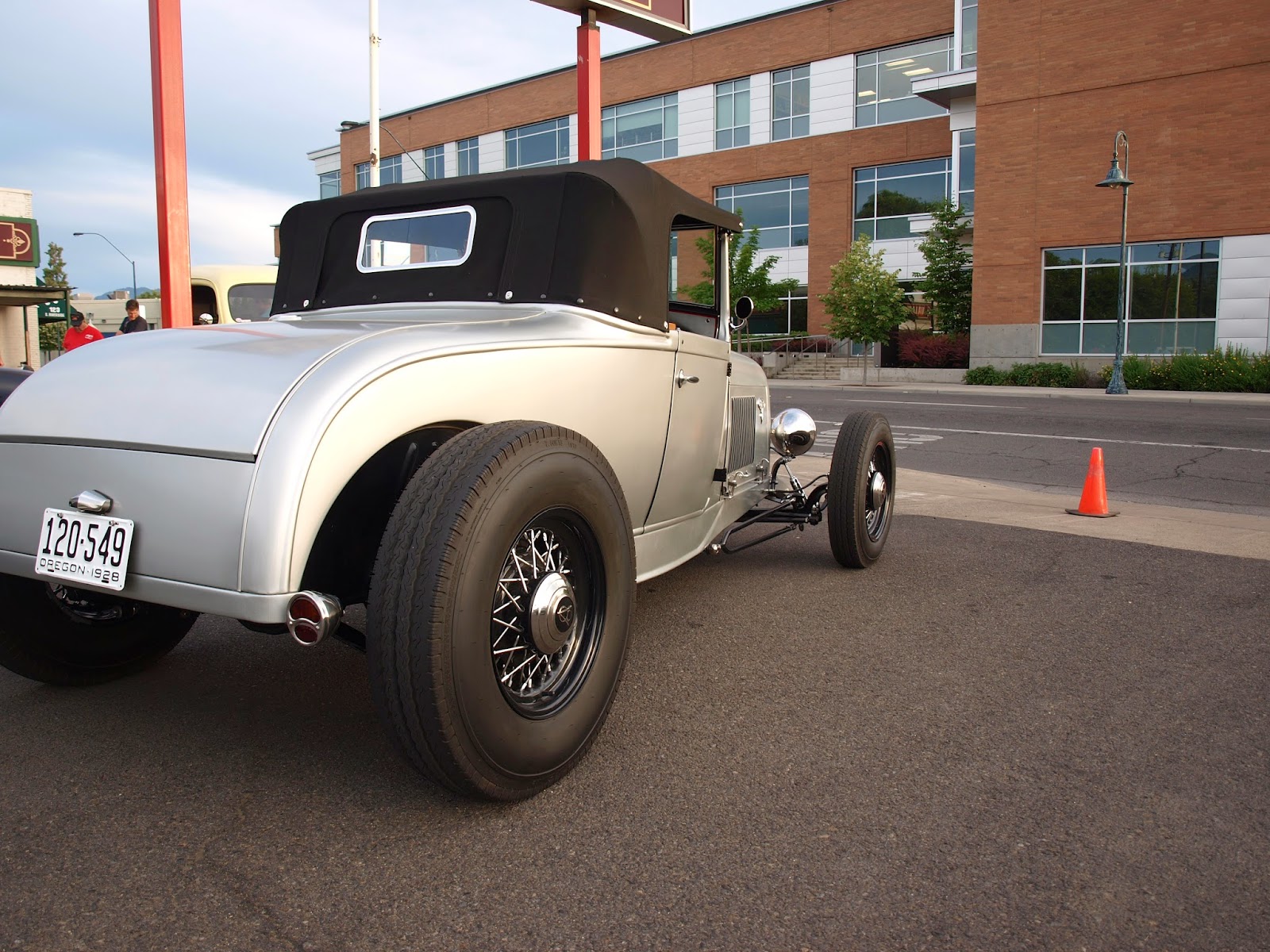 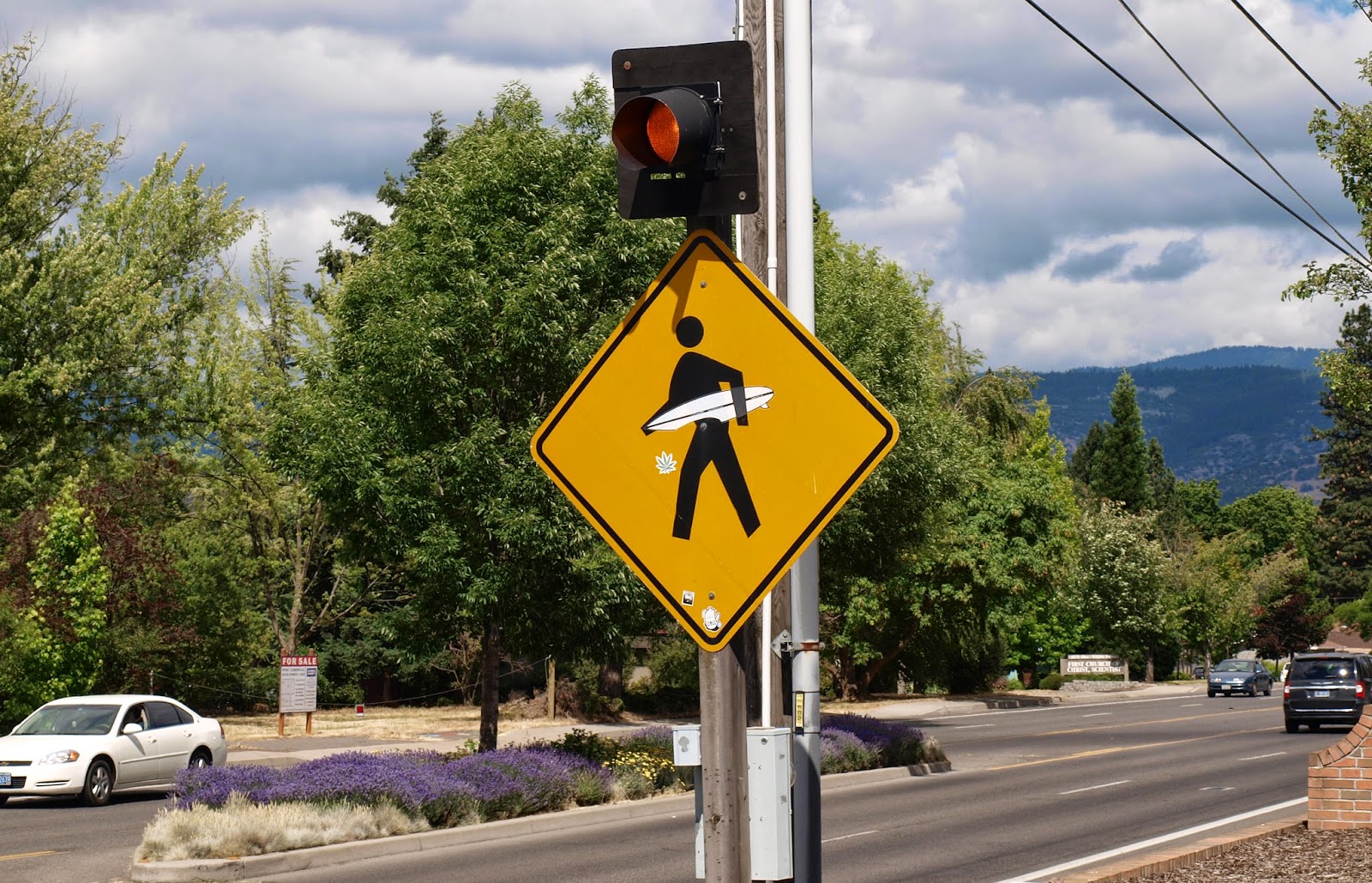 *
SPRING SPRUNG, BUT NOT QUITE DONE 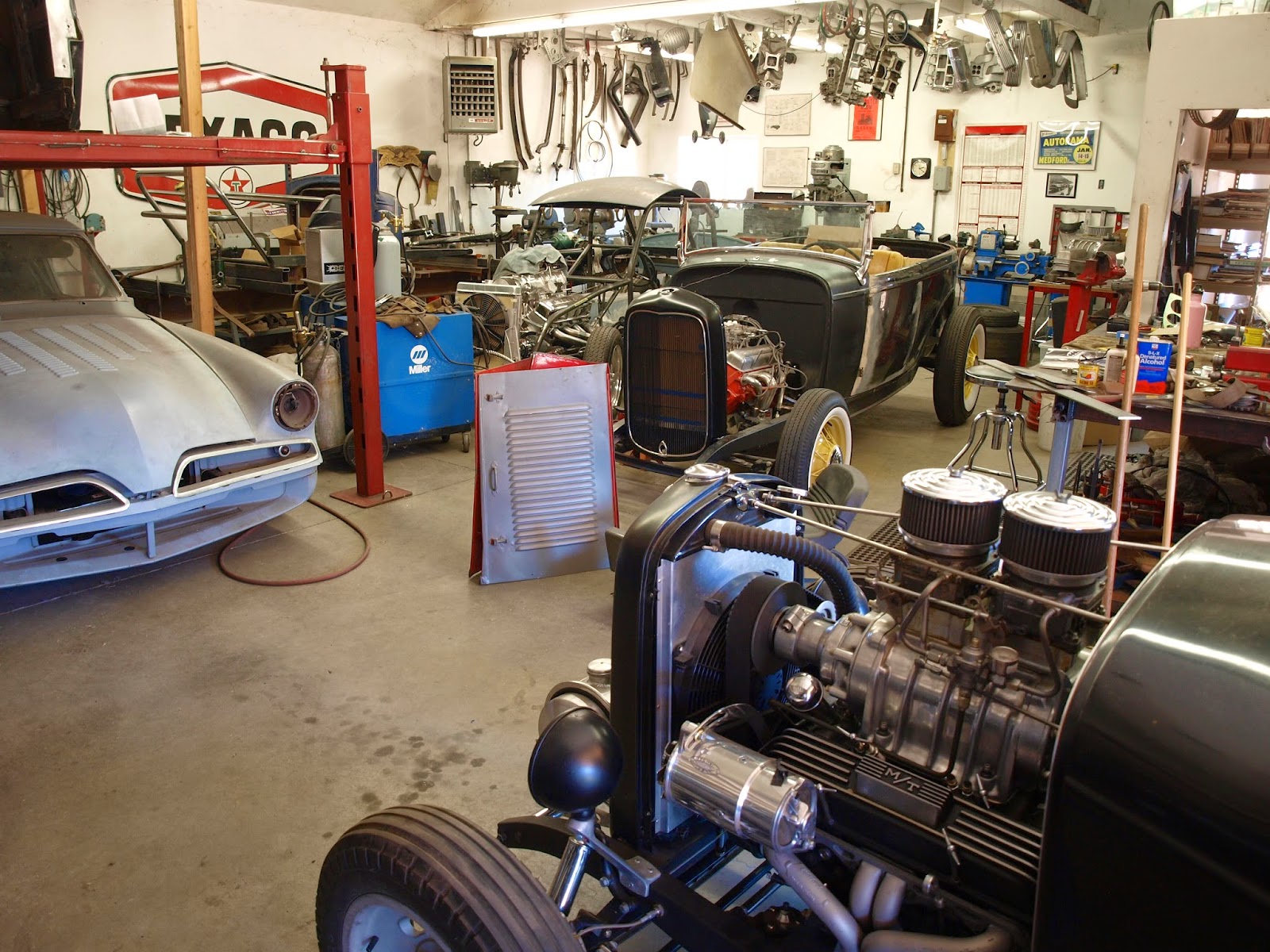 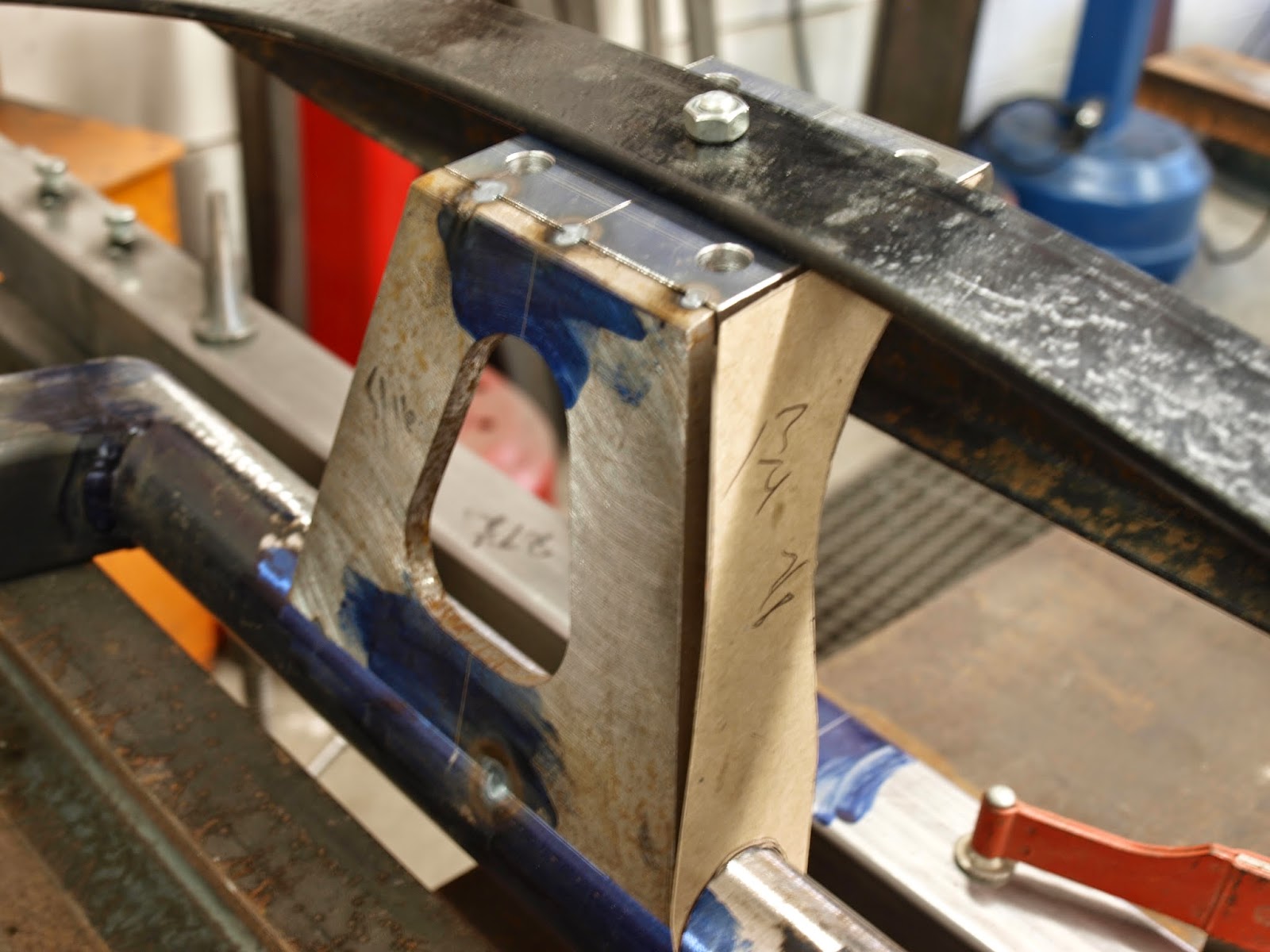 Three weeks of downtime wasn't enough to develop a usable front spring perch design, but three minutes of origami produced positive results, based on a discarded perch upright from one of Doc's previous Model A builds. We got two pieces of it tacked together before calling a lunch break that proved to be our undoing. There's always next time. 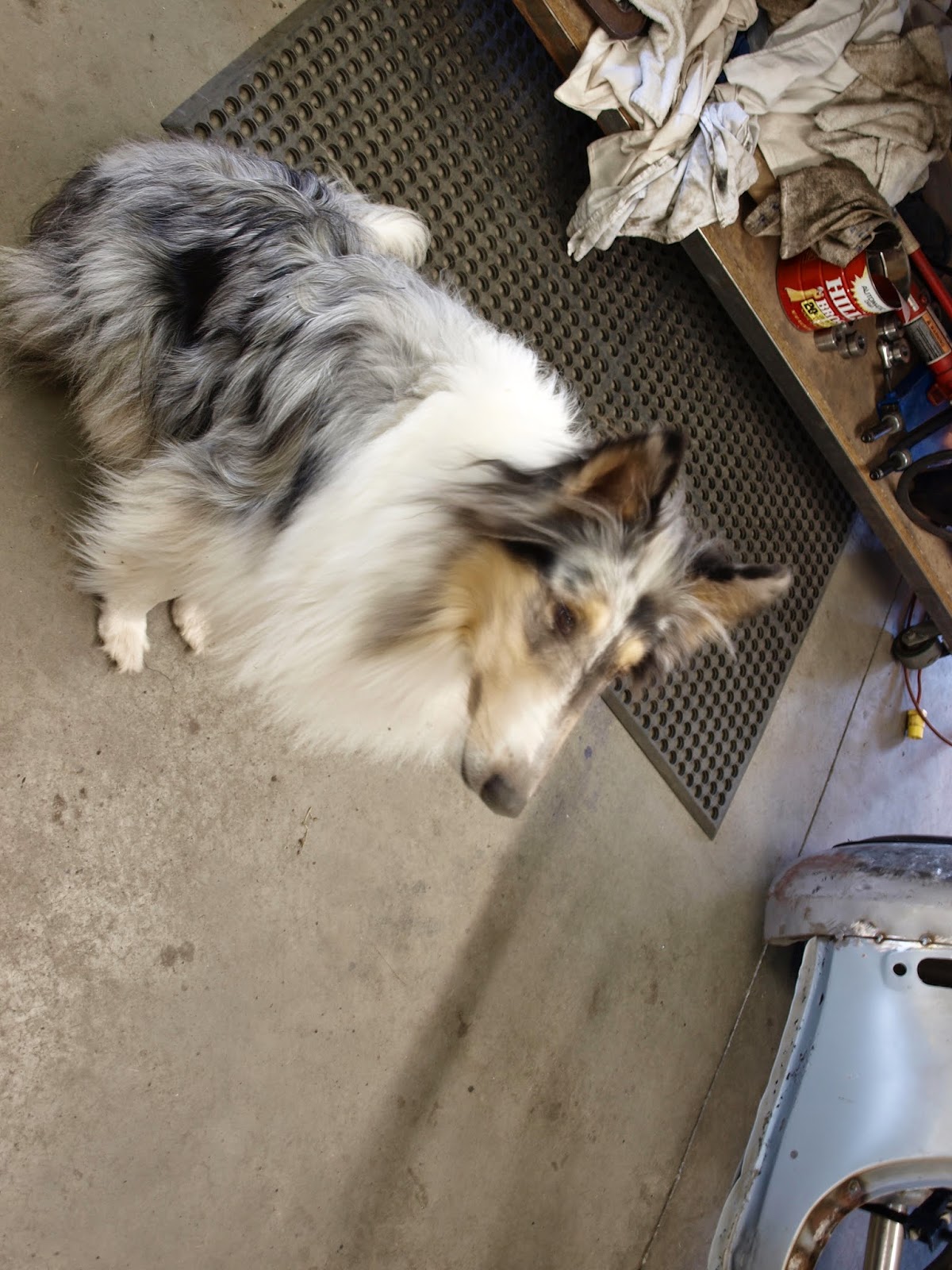 But I did get this artsy (out of focus) shot of Doc's shop dog, Kaylee, adoring her master's tack welding prowess. (Scotty shots) (Scotty gig) 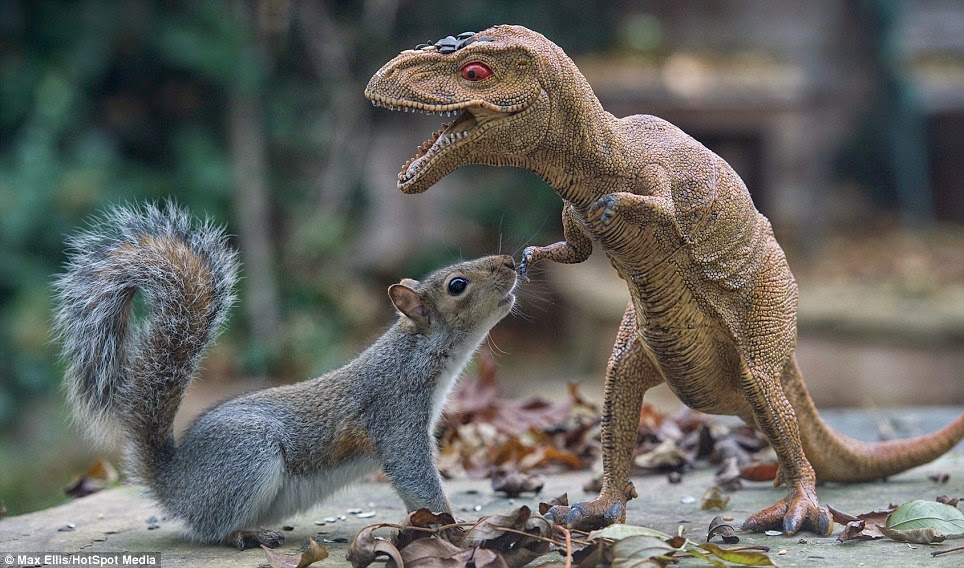 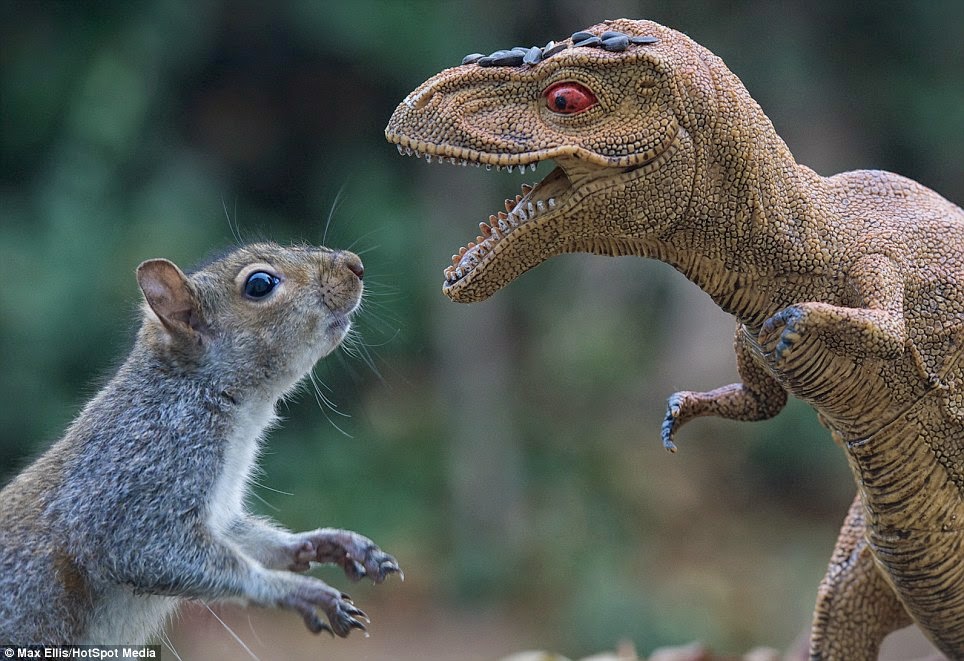 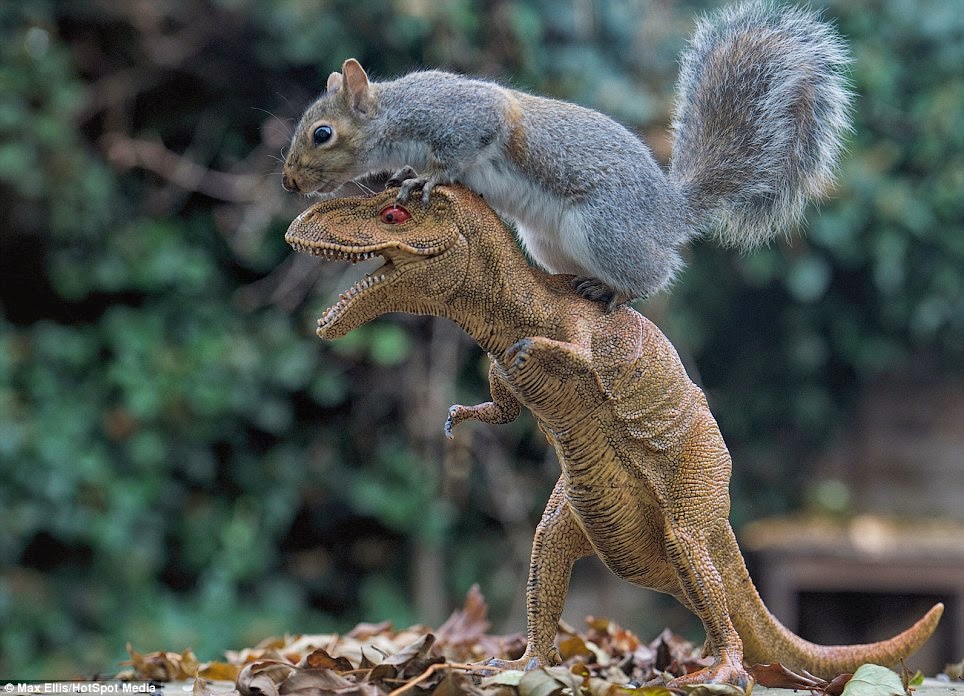 Incredible photos of a squirrel holding its own against one of Earth's most aggressive carnivores! We have verified these images have not been Photoshopped. This really happened. Final score: Squirrels roam the Earth, but Dinosaurs haven't been seen in years. We've dispatched a crew to investigate rumors of government warehouses in Roswell, New Mexico, said to contain thousands of dinosaurs. Stay tuned. 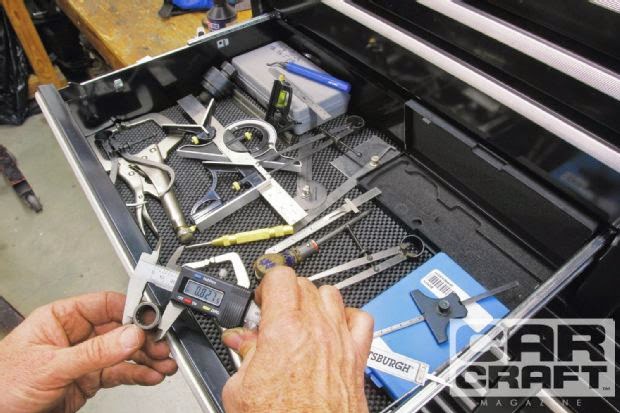 When Car Craft Tech Editor Jeff Smith was washed away in the SourceInterlink editorial slaughter now known as Bloody Thursday, we figured he'd have plenty of time to become reacquainted with his home projects, but we were blissfully wrong. Jeff is busier than ever, freelancing his uncanny mechanical insights to a vast array of magazines. We celebrate Smith's survival instinct with this image of him in the zone, doing what he was born to do. And no one does it better (except maybe Hot Rod Tech Editor Marlan Davis. There's only one way to decide that: Tech Off!). (Photo courtesy of Car Craft.com)

We couldn't do what we do without the support of our sponsors (understatement). We highly recommend their services to you, the consumer. We hereby break our self imposed ban on advertising to tip our hats to: 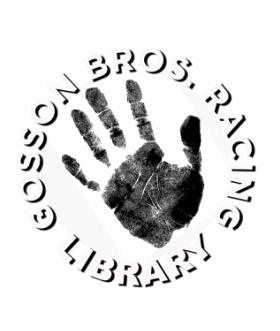 The world's scrappiest little publisher is at it again, following up their freshman release Racing to America (available at:  https://www.createspace.com/4338903
http://www.amazon.com/Racing-America-Global.../dp/1490539778 ) with an atypical sophomore effort destined for a spam box near you in the coming months. Beware. 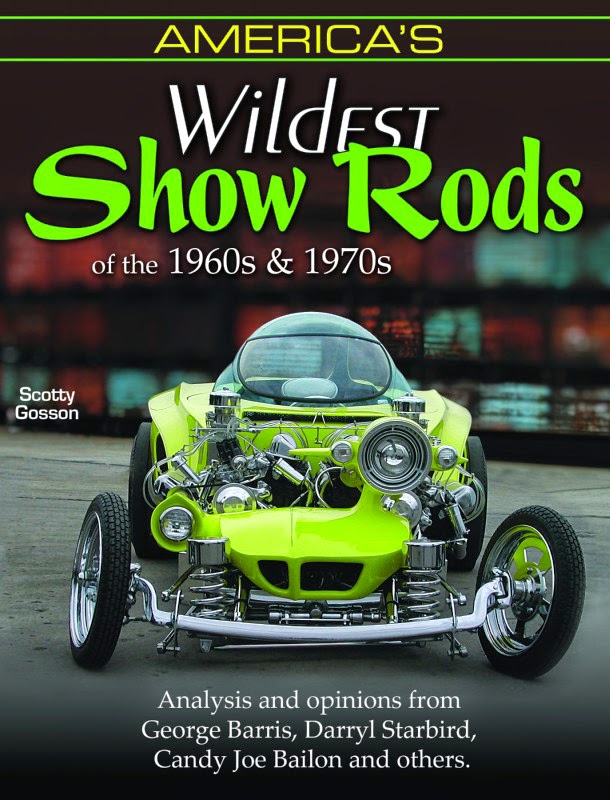 CarTech Inc. was the force behind founding this blog and continues to support it, despite holding their collective breath while reading each post. Soothe their frazzled nerves by picking up a copy of America's Wildest Show Rods (available at: http://www.amazon.com/Americas-Wildest-1960s-1970s-CarTech/dp/1613250363). They need to make room for my next CarTech book, due in stores this summer. 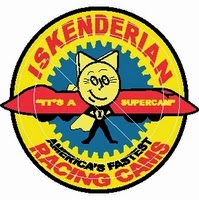 Isky sticks have been the default cam of SGE and Gosson Bros. Racing for decades. There's good reason for that. Not only are their products still made in the same shop and spirit as always, but Ed Iskendarian and son still fill the place with cigar smoke every day. If not in the shop, you'll find them at the race track, doing hands-on R&D work. Bottom line: They know their stuff, their camshafts perform better than anyone else's, the quality and customer service are second to none, and pricing is fair and square.

Most of all, we thank the SGE Nation for making this humble blog the hub of the world's cyber traffic. Thanks to your unmatched passion for hot rod insights from authors authorized and otherwise, we now enjoy more daily hits than all other blogs and websites combined (well, except for pornography and healthcare.gov). 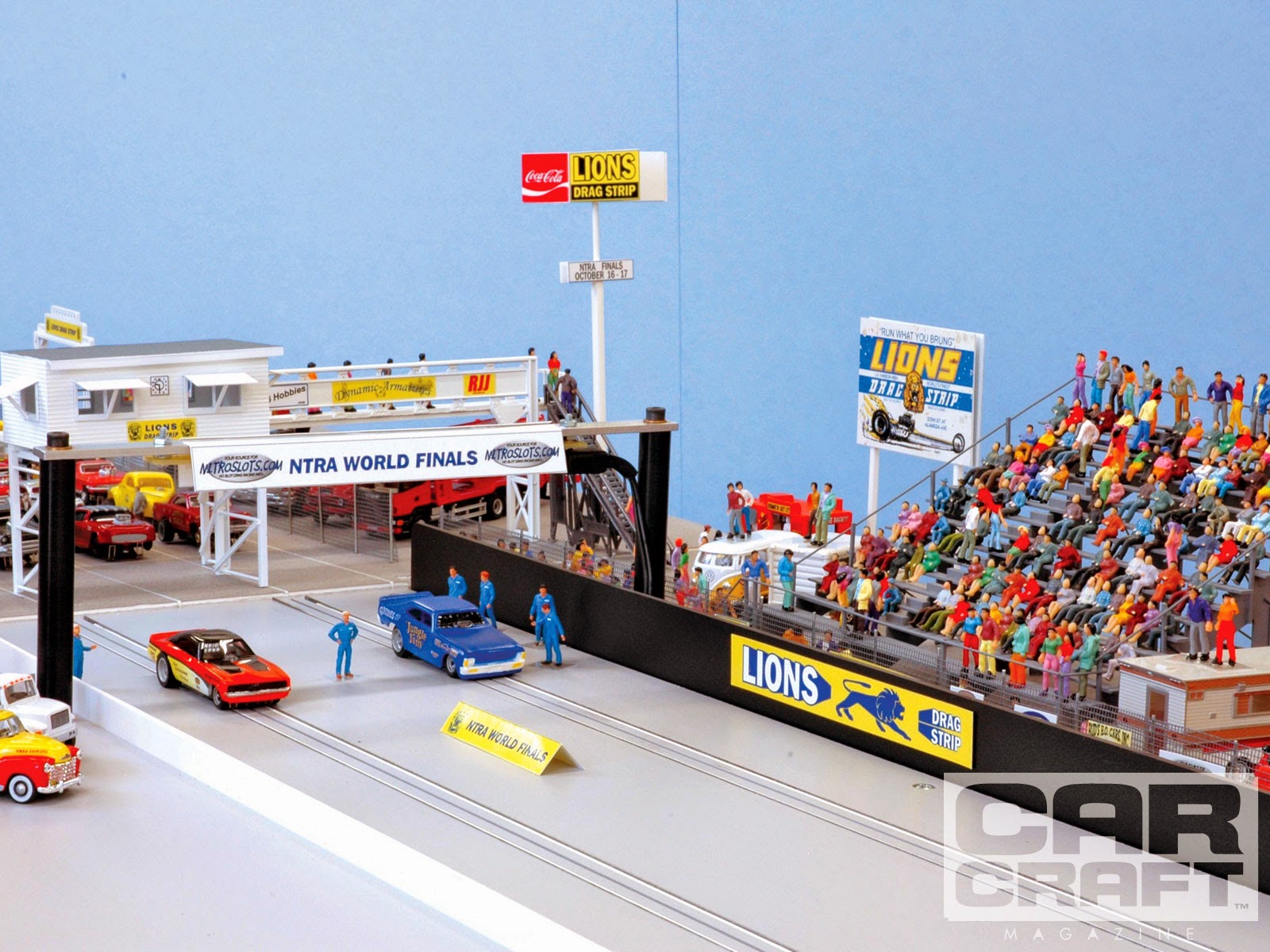 From the fans in the stands to the track personnel, chassis fabricators, engine builders, photographers, hot dog vendors, and the racers laying it all on the line, no species in history has shown more passion than the SGE Nation. THANK YOU ONE AND ALL!!! (Photo courtesy of Car Craft.com)
*