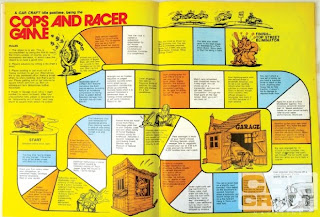 From 1977 to 1996, I made my home in Omaha, Nebraska - a surreal story in itself, which will wait for another day. I had come of age via seven-night-a-week cruising in small Oregon towns from The Dalles to Redmond to Medford. But Omaha boasted over 100,000 citizens when I arrived and adjusting to the scene there was akin to swinging from little league to the majors. My Omaha peer group would meet at a greasy little neighborhood burger joint, then make our way across town to the dense action on Dodge Street. During the '80s, Omaha brothers Mark and Scott Grimes were snagging national ink with their Pro Street cars and whispers of magazine types lurking around town were commonplace. And so it came to pass that an anonymous rumor monger planted an ad in the Sunday classifieds (our gearhead community lifeline at the time) touting a Car Craft magazine visit for their Cruisin' USA series. The Want Ad notice was totally unauthorized by Car Craft, and considered bogus by most locals, but that didn't stop a seething horde from creating a massive traffic nightmare, "just in case". The police were not amused and somehow managed to locate Car Craft editor Jeff Smith, who was actually there, embedded among the cast of thousands. The cops demanded Smith make an announcement (via police bullhorn) to disperse the crowd, but Jeff opted for a jail cell, instead. Journalistic integrity and the people's will were both served that night, and what an evening of hot rod mayhem it was - an exclamation point to the final days of free form automotive expressionism. Street racers performed for perhaps their largest audience in history, and at least one civilian vehicle was literally run over (luckily sustaining no personal injuries). We immediately paid for our sins with a firmly enforced cruising ban, which may still be in effect, for all I know. End of era. Due to statute of limitations guidelines, the details of the preceding story must wait until the passing of Jeff Smith or Source Interlink Media - whichever comes first.

By the time I arrived back home in Oregon in '96, my hometown of Medford had joined hundreds of other communities in the cycle of banning cruising, then later offering a one-night "cruise" in an effort to draw consumers back to their dying downtown districts. The fact that these so-called cruises were no more than parade routes didn't seem to faze anyone. Baffled, I entered the '96 Medford edition out of curiosity. I found the experience to be better-than-nothing at first, but ultimately hollow, but for a lingering depression. I drove my hot rod to a couple more of these, parked it at the far edge of the event, watched for a while, and drove it home. Then I quit going, altogether.

The participants in these events pay good money to be exploited and seem to have a great time. I'm happy for them. The community also seems to enjoy the show, and it does bring some much needed revenue into town. Today, I have accepted the fact that cruising as I knew it is long gone, period. We've all moved on. Today, garage crawls and caravanning to races are still honest grassroots car activities, and we enjoy several  non-lawnchair car gatherings, many featuring driving events. The scene is different, but still kicking. There's plenty to smile about. Just don't call a car show or a parade a "cruise", okay? The dishonesty is too insulting. 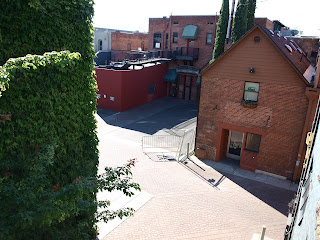 Medford Cruise Weekend, 2013. Saturday morning, I was heading to Dr. Lockjaw's shop to work on my Model A, when a sudden compulsion to walk to breakfast in the park overtook me. This was the scene in the alley outside the SGE office backdoor at 7:00 AM. 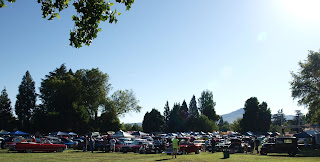 They were setting up the show 'n' shine in Hawthorne Park, as I ate a six dollar plate of eggs, "cooked" by local Boy Scouts, none of whom displayed cooking badges on their uniforms. Livin' on the edge, as usual. 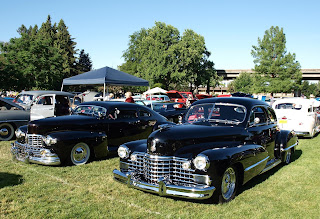 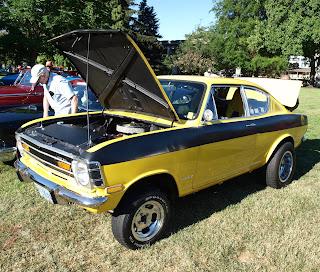 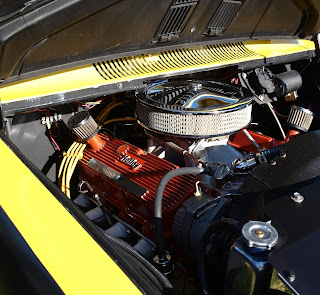 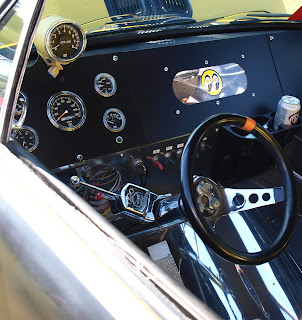 The only real hot rod I found was this local street/strip big block Opel Kadett - built on a Model A frame, with chrome Anglia front suspension and '57 Olds rear. It's been wandering local streets for a long time, but is finally in rehab and looking better already. 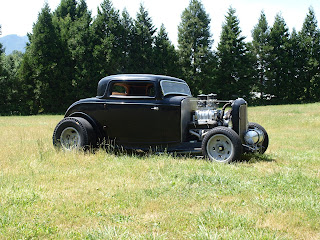 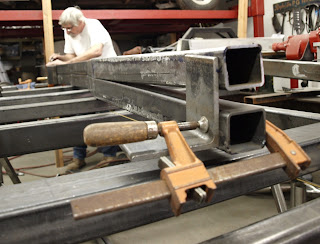 Out at Doc's place, we kicked his coupe out of the shop and proceeded to fine-tune my frame rails in preparation of installing the front crossmember. Another productive day of sweat and grinding dust. 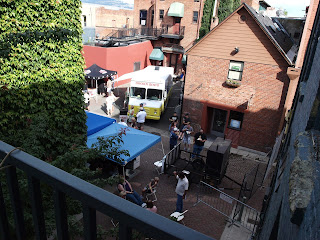 I got home from Doc's at 3:00 PM to find the alley jumping. Funny to see people affecting an elitist foodie/wine connoisseur persona in a back alley jammed with beer tents and taco vendors. 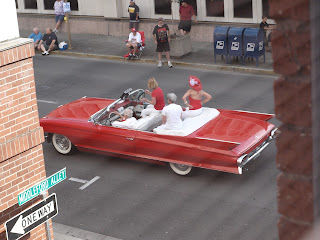 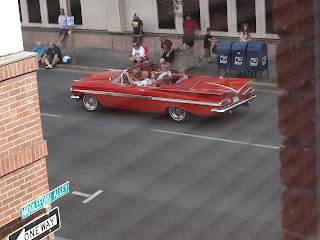 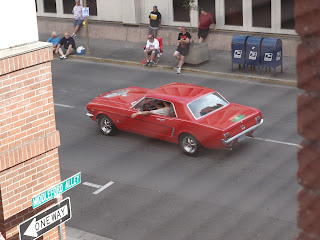 Typical examples of what was hyped as "Cruising, just like back in the day!" I cringed when I saw two customer cars that I helped build making laps (not shown). But, good for them. There's a reason we call these "Brown Sedans" ("Red Flags" might be more appropriate). Shot from the SGE office window. 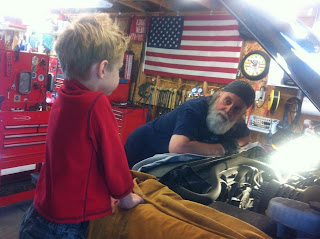 My pal Ray Willet recently posted this shot of he and his grandson on Facebook. It looks like we're going to be just fine, after all... 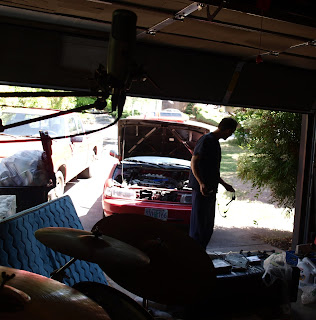 Sunday was spent repenting for my snobbery in the holy temple of James Drive Studio. The Scotty Gosson Combo album is inches from the stripe and sounding good. At break time, Rob installed a fresh ignition in his driver.

And just for the record, while I drool over the cars, I don't care for Cacklefests, either. So there.