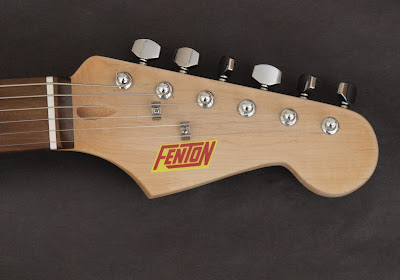 My pawnshop Fenton 6-banger may not keep up with the space-age Mosrites and Danelectros, but still earns its keep as a garage band workhorse. Thus has the Fenton become the face of the Scotty Gosson Combo (which takes a lot of pressure off of my mug). (Scotty shot)

Producer Rob James and I have finished our latest album of hot rod guitar music (Nitro Martini), and will have copies for sale soon. We've been challenging each others abilities, resulting in a somewhat more refined and fully realized product than our freshman debut (Surfing the Asphalt Playground). With nothing better to write about this week, I've chosen to prime the pump with some illustrations of what you can expect from this latest collection of the noises in my head. For more detail on this music, visit our kitchen table-style Scotty Gosson Combo Facebook page. Below is the Nitro Martini line-up, presented in glorious black & white to match the artwork and sonic tone of the album. 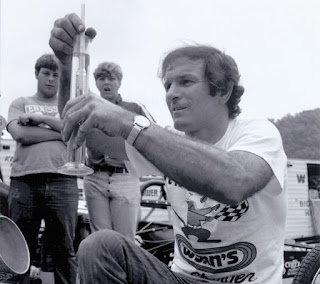 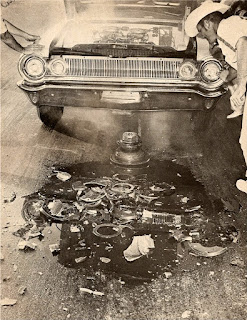 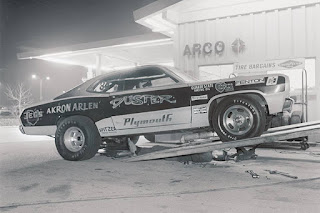 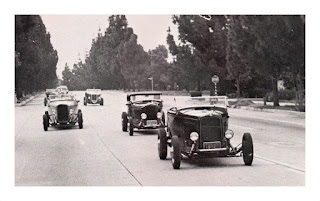 Throw the Map out the Window (Photographer unknown) 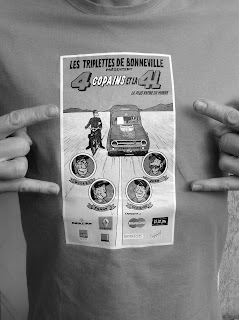 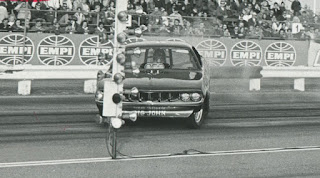 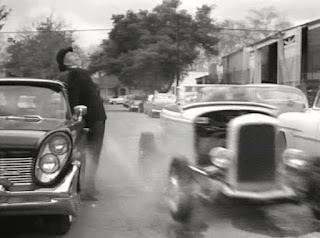 Once Around the Block (Photographer unknown) 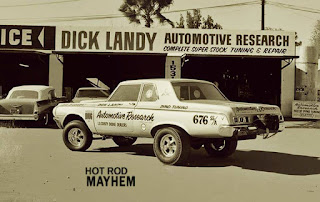 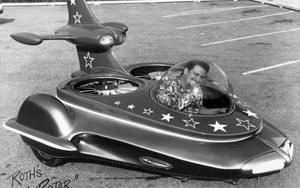 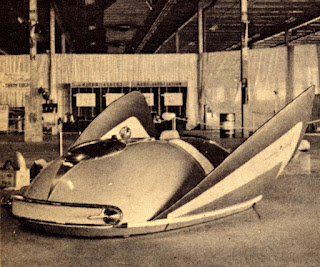 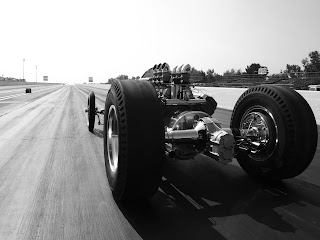 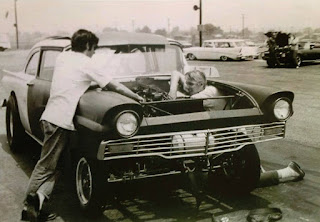 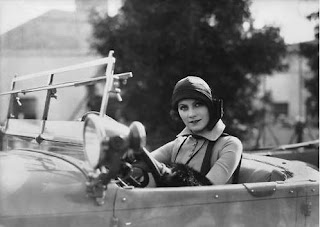 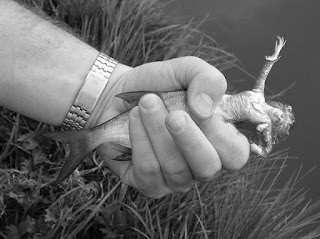 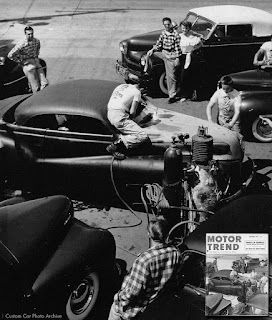 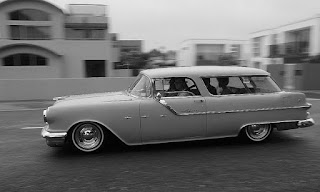 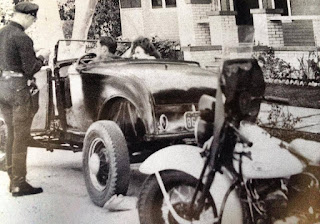 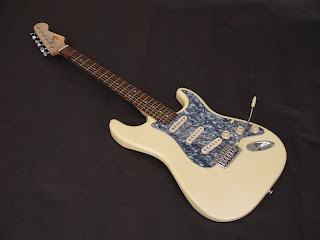 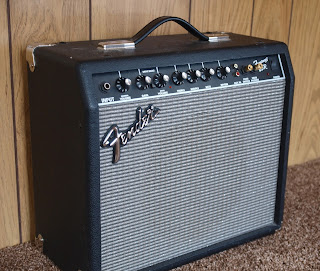 Most of our music has been performed on this Chinese Strat copy (a Squire), which included case and amp for $150 at Valley Pawn. The guitar weighs in about the same as a Ford F-350, handles like your grandfather's '64 Rambler American, rivals the build quality of a Renault Reliant, and boasts the power of a high mileage Geo Metro. But I dig it. The amp works fine, but we've only used it on one song in three years of recording. The new plan is to have a huge hit single and blow the royalties on a playable electric pawnshop solidbody, then retire from the music biz. Again. (Scotty shots)

The Gosson Bros. BTU Anglia's progression through the West Coast Gas classes continued last week at Sacramento Raceway. This initial mock-up shot predates the installation of an alky injected 377" Chevy, later swapped for a carbureted 355-incher by 2nd owner Rick Smith, who teamed with 4-time VRA Champion Craig Wallace to perform several sheetmetal changes. Smith raced it successfully before selling to Rich Feichner, who has incrementally stepped his program up to final round status. (Scotty shot) 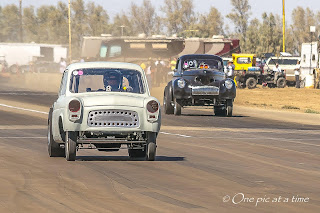 The BTU scorching the tarmac at Sacto. The obese Willys never had a chance against the flyweight Anglia. Feichner dominated this C/Gas final round to the stripe, where he lost on a breakout. The BTU is too fast for its own good. And I'm a proud uncle. (Photo courtesy One pic at a time) 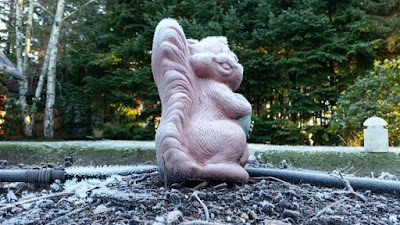 This week's random squirrel file pick is titled "Edgar the Squirrel". Not sure Edgar's even a real squirrel, but the shot was contributed by a trusted photojournalist, so will give it a free pass. (Photo courtesy Chris Shelton) 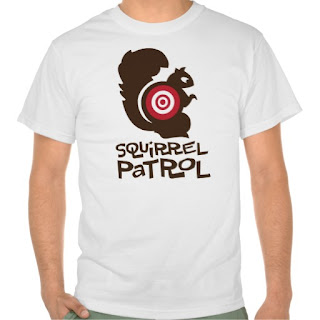 Credit where it's due: Yes, we have amassed a squadron of dedicated squirrel photo acquisition specialists (AKA "Interns") who scour the web 24/7 for your amusement. This squirrel wrangler's SGE ID badge photo was cropped for good reason... (Photo courtesy SGE Human Resources Department) 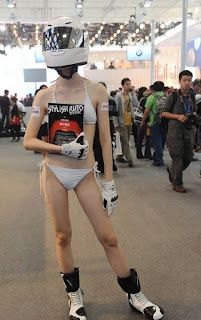 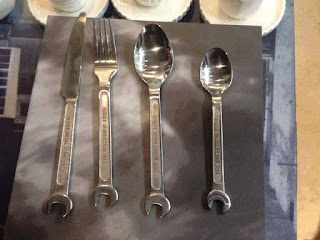 Though they didn't fulfill it, at least the Squirrel Department interns understood their assignment (kinda). Things were even worse in the SGE Toolbox Division. Our sincere apologies to the readership for this disturbing development. We hereby publicly vow to have the problem corrected by next week's post. (Photo courtesy anonymous ex-SGE award-winning intern) 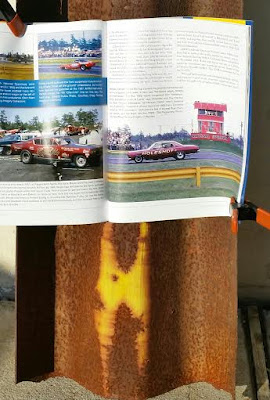 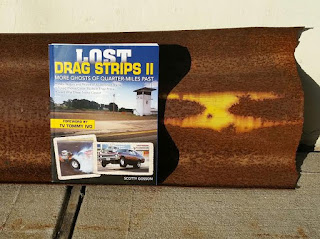 As a complement to last week's spamming of Lost Drag Strips II, East Coast correspondent Motormouth Ray contributed these snaps of the book posing with a length of New York National Speedway's iconic yellow guardrail. Just how did Ray come to be in possession of this crusty artifact (the guardrail, not the book)? "I had gone out to John Fiore's new shop at the Eastern end of Long Island to pick up some Pontiac parts. Kilowatt Kevin and I couldn't find the shop, nor raise John on the phone, so we backed into a dirt lot facing a biker bar called The Maples, and hoped he'd drive by. Some maniac with a chop saw was making a major racket, but when it stopped, my phone was ringing. It was John, telling me to look behind me. Yep, we got lost, not five feet from his shop. Turns out, it was John doing all the cutting: Sections of the National Speedway guardrail that were still standing, even after all the urban development of the property. Generous John then offered Kevin and I our own pieces of history, which we graciously accepted. That's the mystery, unraveled."  (Photo courtesy Motormouth Ray) 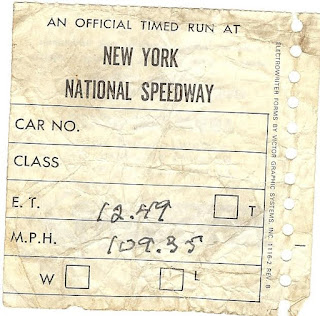 Bonus National Speedway shot: "Here's my #1 prize, which was bestowed on my 'one that got away' - the '71 bigblock Camaro that I once owned and raced. And now... you know... the rest... of the story... Good day." (Photos courtesy Motormouth Ray) 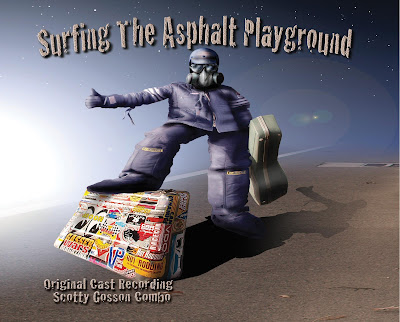 While we're in the spam zone, here's our first album, intended as the soundtrack to an as-yet still unpublished book detailing my 2009 cross-country hitch hiking odyssey to various U.S. race tracks. The album is still available at Amazon.com and Createspace.com. (Image courtesy Gosson Bros. Racing Library)