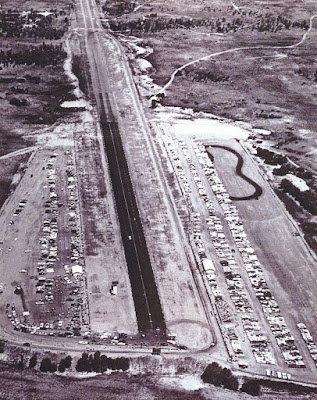 A launched piston's view of Minnesota Dragways, in May of 1960. From '59 to '76, trillions of events (from teensy intimacies to mammoth life-changers) transpired there. Could anyone remember it all? (Photo courtesy Dave Young, who also raced there)

"I was there!" If you really were, you get an extra credibility point. If you were there and recall the events accurately, you're a hero. If you can remember the events accurately several decades after the fact, you qualify for Sainthood. While I was witness to some events now considered to hold historical significance, I couldn't be everywhere. And as for my memory... forget about it.

Due to some unfathomable cosmic quirk, I've blessedly crossed paths with many people who were so deeply "there" that a large part of them never left. One could claim that I survive by exploiting these individuals for monetary gain. I get to live with that. But each person I interview must sense my passion for the subject matter and respect for their involvement, or they wouldn't give me the time of day.

So it is that an army of active participants in drag racing's golden era shared their priceless memories with me for the sake of the historical record in Lost Drag Strips II. I wrote the book's Epilogue as a tribute (and caveat) to the heroes I speak of here. By that final stage of the project, my own memory issues were beginning to turn my life upside-down, but I believe I got most of the facts straight. Now the book is out, and the reactions are trickling in. All are positive, so far, but the most helpful response comes from a reader who couldn't have been any more "there"...

In a photo caption for the feature on Minnesota Dragways, I wrote that Arvy Mack's "Big Wheel" Gas/Dragster had been sold to a Don Sandstrom in Deluth. But Arvy's son Tom Mack tracked me down this week and clarified, "The truth is, he sold the car to (fellow GSTA racer) Tom Hoover (no relation to the storied Chrysler engineer of the same name), and helped him in his early drag racing career. I'd like to see the correct info in any updated editions, and would be happy to have you speak to me or my dad, who is alive and well, and living in Florida. Tom Hoover would confirm it, too." Should there be a second printing of this book (or perhaps a Lost Drag Strips III), justice to history can now be served, thanks to Tom Mack's efforts. That's how it works. I just wish it happened more often. By the end of the conversation, I received another Tom Mack quote that means just as much to me as the first one: "It's a great book. I plan to give it to my dad for his 89th birthday, in June." Mack's action inspired a frantic search through my notes and files that revealed nothing to explain my belief that Sandstrom had bought the Big Wheel. That may remain an unsolved mystery, unless Mr. Sandstrom himself steps forward... 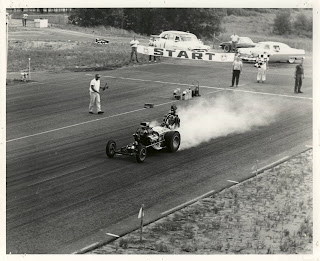 The image that sparked a firestorm of global controversy. Yeah, my work is that influential. For details on the peculiarities in this photo, I refer you to the caption in Lost Drag Strips II, available at hip bookstores and websites everywhere. (Photo courtesy John Foster Junior, who grew up there) 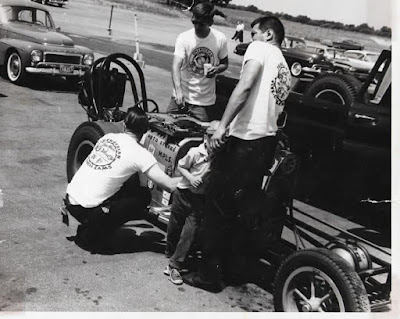 Every strip seems to have at least one local hot shoe who pitches fits to the booked-in talent. At Minnesota Dragways, it was Big Wheel Auto Store owner Arvy Mack who welcomed all comers to the strip with a sharp reality slap. Arvy (back to camera) and son Tom (clinging to Arvy's leg) prep the Big Wheel for another winning round at Minnesota Dragways in 1960. Bruce Norman was usually at the tiller. (Photo courtesy Tom Mack, who also grew up there) 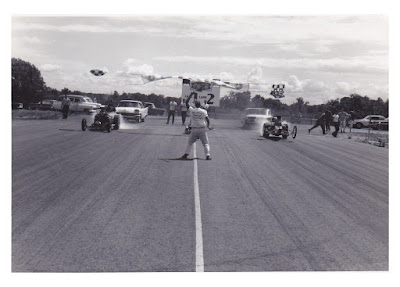 Bruce Norman in the Big Wheel (at left) sneaks past Don Mattison's skyward "Guzler" (likely steered by Bobby Vodnik), and holds the advantage to the finish. Again. (Photo courtesy Ron Johnson, who also raced and worked there) 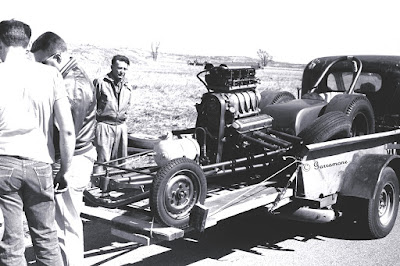 This out take from Lost Drag Strips II comes courtesy of my best-friend-I've-never-met, Pete Garramone. Pete has been working the national drag beat since 1953 (with a focus on the Mountain West region). This candid shot from the pits of Continental Divide Raceways (at Castle Rock, Colorado) depicts some typically intriguing ingenuity of the day. Pete's take:"I would normally shit-can a photo like this, but for some reason, I didn't. I have no clue who owned this car, but maybe one of the local guys can identify it. It was taken in '59 or '60. At least some of the younger racers can get an idea of how the cars got to the racetrack."

Pete Garramone's drag race photography has been omnipresent in Scottyville. The guy is prolific, to say the least. Early on, I developed a hunch that we just might connect some day. When the Lost Drag Strips II book project led me to the Rocky Mountain racing scene, my first call for help went out to Pete. Despite the previous intuition, I didn't expect an answer - I wasn't even sure he was still alive - I just wanted to say that I tried. But Pete answered the call big time, connecting me with Denver-area drag race historians and showering me with wonderful imagery from his impressive body of work. And he did all of this with a quiet grace and humility that oozed credibility. My kind of guy. We haven't met in person yet, but I'm looking forward to it. I thought you might dig Pete too, so I asked his permission to let you eavesdrop on my photographer vetting process, via one of our e-mail conversations. Thankfully, he said yes.

Scotty Gosson: Thanks for taking the time for this, Pete. I’m aware that you have a life and it keeps you hopping, so this means a lot to me. In fact, you’ve been an action figure for quite a while now. How did you get drawn into hot rodding in general, and drag race photography in particular?

Pete Garramone: I went to my first drag race at a dirt track in Colorado Springs in 1953. So, naturally, I joined a hot rod club called the Strippers, here in Denver. I had a ’33 Ford five-window coupe, and wanted to race it. That never happened, because I couldn’t make it competitive. So I turned to my camera and started taking pictures. I finally sold my coupe, bought a good camera (Pentax H-2), built a darkroom in my basement, and started to get serious about drag photography. 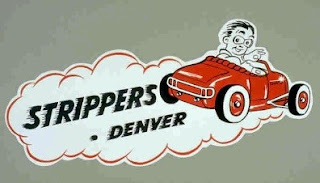 Be true to your club. It worked out well for Pete.

Scotty: Are you self-taught, or mentored, or school-trained, or what? Your photos were strong, right from the beginning.

Pete: Self taught. A relative taught me beginning dark room techniques. I read a lot of photography magazines. A lot of negatives were thrown away in those early days. I bought 28 mm and 200 mm lenses for my Pentax, and wrote an article on the Strippers Hot Rod Club.  It was published. The magazine sent me a Press Pass and I was off to the races, pun intended. All of my articles were published in East Coast Magazines. Long story...

Pete: Before I sent anything in to be published, I bought a bunch of magazines and read the editor's column. The East Coast editors wrote in my style, and the West Coast editors didn't. I never had an article bounce back, and after the first one (which was deeply edited), I learned to be to-the-point with the articles and send the best-captioned photos I could print. Magazines paid by the page, and photos took more room. Makes sense, huh? I shot Panatomic X for still shots, and Plus X at the drags. All color shots were on Ektachrome, which is what magazines demanded. All the black and white photos were done in my darkroom. I did a lot of articles, all of which were lost in a fire. But the best one from my point of view was an article in Rodders Journal #27, which documented my career in drag photography.

Scotty: Oh yeah, the "Rocky Mountain Nostalgia Drag Portfolio"! That was a really nice piece. So sorry to hear about the fire though. I've lost whole books via hard drive crashes, but a fire just seems so much more... cruel... primeval, even... At least you survived! 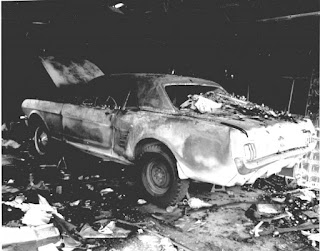 Pete: Unattached garage burned, losing my '66 Mustang, along with all of the magazines with all of my articles. Devastating!

Scotty: Gack! Such a heartbreaking image. And a reality slap: All of my print work is sitting here in a cardboard box, with a jug of solvent leaning up against it...

At that point, the back-and-forth was interrupted by our mutual overload of doctors appointments. Despite the abrupt ending, I believe Pete's message was eloquently delivered: Head down, spirits up, aim forward. We still chat online, albeit briefly lately. We'll probably continue this conversation some day when we're both feeling better. I hope that happens sooner than later. Spoiler Alert: We'll both probably be just fine. 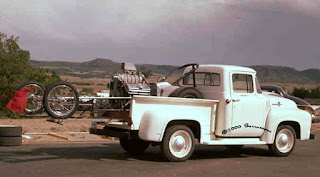 And we end where we started. (Photos courtesy Pete Garramone) 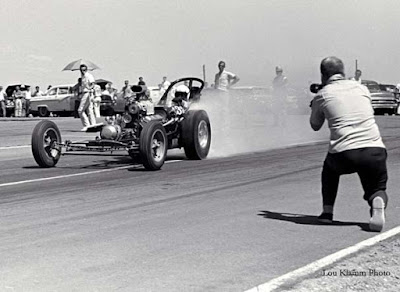 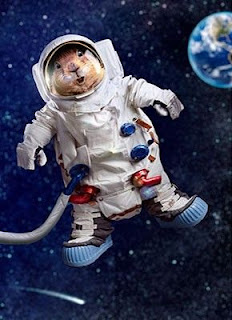 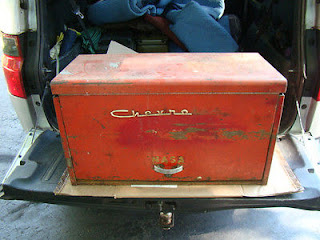 As Cold War-era space race tensions escalated, NASA and Chevrolet secretly teamed to develop the breakthrough "ChevroNasa" toolage that finally enabled the mass production of Chevrolet's long delayed (and top secret) "Nova" platform in 1962 (in July of 1978, General Motors Corporation publicly confessed that "Nova" was actually a misspelling of "Nasa"). Since then, the Nova has won more motorsports championships in more racing disciplines than all other makes and types of automobiles combined, on Earth or elsewhere. This never-before-published satellite image of the very first U.S. spacecraft to touch the lunar surface (in 1965!) does not show the Yugo sedan abandoned on the shoulder of the moon, just out of frame. As always, you saw it here first! (Photo courtesy Sputnik Motors Inc.) 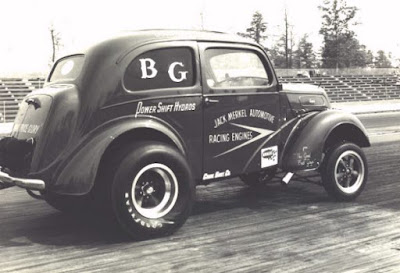 SGE East Coast correspondent Motormouth Ray alerted us back in January of 2016 to the passing of New York gasser hero "Coney Island" Ralph Landolfi, but we are shamefully tardy in publishing the news. Sincere apologies to Ralph's family and friends. Landolfi played a prominent role in our recent feature piece on the "Ingenue" Buick funny car. He is shown above with the winningest car of his career, the red "East Wind III" '48 Anglia that also put Vinny Tarantola's Power Shift Hydros (later known as Vitar Transmissions) on the map. (Photo courtesy of Adam Landolfi)