MY DARING ESCAPE FROM CYBORGIA!!! 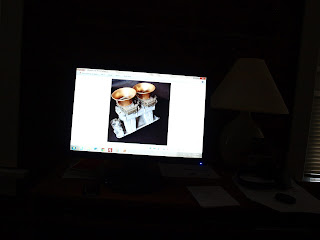 When the SGE offices moved into the spacious top floor of the 100+ year old Allan Cartography building in downtown Medford, I envisioned an exciting new life: Lunching at the myriad neighborhood coffee shops and cafes; window shopping while strolling tree-lined sidewalks; chatting it up with members of the local arts scene; and generally embedding myself into the urban community. The reality has been more akin to solitary confinement in a windowless basement holding cell. I've been working like a dog.

This month of May includes a deadline for a Cartech book that has challenged me to capacity. Just when I feared breaching the edge of sanity, Hot Rod Deluxe magazine threw high test gasoline on the fire: Could I write a late breaking feature story for the upcoming issue, which ships to print in a week? And, oh yeah, the photoshoot for this piece is scheduled for the day before shipping. Who am I to refuse a request from the tin hat priests of hot rod photojournalism? Of course I accepted. I enjoy a good adrenaline rush as much as the next Darwin Award candidate.

The story was knocked out, submitted and accepted,  in record time. Immediately afterward, I stuck my head out the window, gulped up some fresh air, and reflected: Strapped into my hot rod, I was a cyborg - a humanoid cog in the machine. And now, a month of banging gears at the keyboard had delivered me to a creepy and lame parallel: Flirting with disaster at every turn of phrase, roller coaster story arcs, utter dependence upon  intuition and decisiveness for deadline survival. An engaging ride, but disturbingly far from reality. No doubt about it - I must unplug the cyborg and shake my humanity awake.

Upon cracking open the door to the outside world, I was assaulted by searing sunlight. I prayed for my scorched eyeballs to acclimate, or fall out. How long had it been? My own neighborhood appeared completely foreign to me (once my vision returned). Following a wobbly moment of hesitation, I took a tentative baby step. Then another. And another. The third step landed me at the base of a mummified tree! Good Lord! What had happened to the trees? Double you tee eff?! You know how we Oregonians are about our trees. This was obvious premeditated physical blasphemy! Biological bullying, in the first degree. 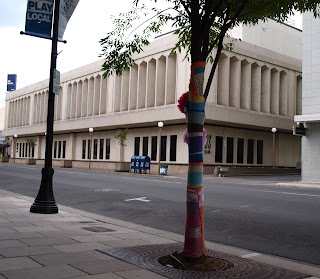 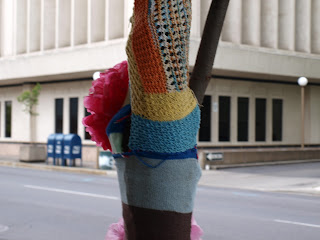 Mother nature in bondage. Right here in small town America. I turned and vomited into the gutter.

Had I really been so isolated as to be unaware that rogue gangs of "yarn bombers" (that's what they call themselves) had been roaming deserted late night streets, stalking unsuspecting vegetation? Yes! A vast network of underground cells populated with jihad knitters had been operating in my town for over a year! And as I soon discovered, this local assault was merely a training exercise for national-scale warfare. 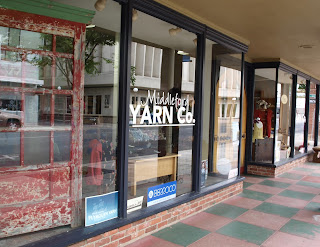 Shocked and awed, I staggered toward cozy safety. Wrong!

Outraged, I strode into the knitting boutique below my apartment and demanded answers. I soon engaged in a seemingly casual conversation with "Sonia" (who bore a striking resemblance to an aged Patty Hearst). She claimed to be "a co-owner of the business", That's just how she said it: "The business". Everyone knows that anybody who speaks in italics is obviously connected with the Mafia. My mouth went dry and my heart rate doubled. "Sonia" revealed a level of fiber-terrorism running rampant across the entire country that I couldn't have imagined in my most cherished dreams worst nightmares. Momentarily letting her guard down (as I laid on the charm), "Sonia" let it slip that, in fact, a highly sophisticated guerrilla yarn bomber squad had actually "bombed" the enormous bull statue fronting the Merrill Lynch world headquarters in New York City! I played it cool, but couldn't believe my ears - the local ringleader had just testified against her own superiors! When she realized her epic blunder, she would have no choice but to take me out, most likely with fistfuls of #3 knitting needles. At least. This was way more reality than a month of solitary hard labor had prepared me for.

I frantically scanned "Sonia"'s showroom for escape routes, finding none. I had walked straight into her devious trap! Internally terrorized, I outwardly feigned calm fascination with a vibrantly illustrated poster depicting rare crotchet stitches from around the globe (including XXX hardcore double-hitches). At last, an unwitting customer entered the shop, and I knew this was my only chance at escape - and survival! On a pretense of "See ya later" (yeah, like never!), I bolted for the unguarded door, cruelly located just below the brightly lit EXIT sign. At first, I felt a slight remorse for knocking the walker out from under the elderly matron "customer", then realized she was more likely a hired assassin. All I knew for certain is that I'd never run so hard in my life. I didn't slow down until after double-locking myself into my apartment.

Fearing for my life, I clawed for my cell phone and pounded at the numbers: 911. 9 - 1 - 1, damn it! Nine One One !!! I heard the awful metallic clicking outside my door. It sensed my fear and matched it in tempo and intensity. The clicking. My God! The clicking! Closer, faster, louder - mocking my panicked heartbeat by clicking at an ever-frenzied rate, until the deafening cacophony pushed the last vestiges of oxygen from the room with one all-encompassing, endless, knitting needle C L I C K !!! That's when I dove for the window. Three stories below, certain death awaited. Time slowed to a near standstill. As my face was about to contact the glass, I saw a hint of breath begin to fog the window pane. My eyelids began the descent to brace for impact. The last worldly image I would see (and only peripherally), was this unfinished blog entry on my computer monitor, reflected in the window to my own death. Caught up in the excitement, I had forgotten all about this blog deadline! I feel much better, now that it's finally finished. Thanks, "Sonia", whoever you really are. It's just good to be alive. 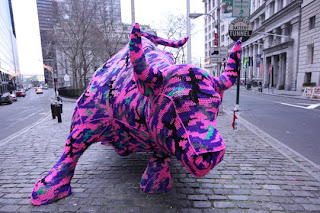 I celebrated my survival with online research and discovered these shocking images. It's even worse than I thought... 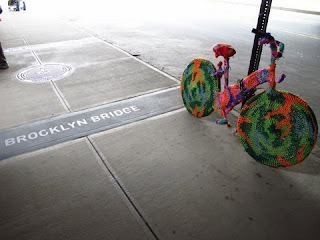 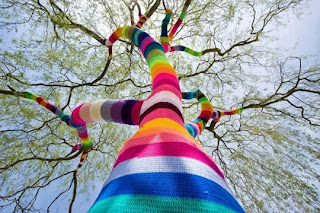 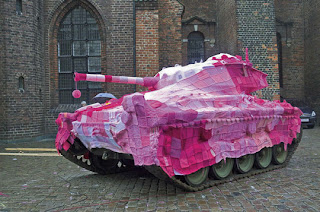 Recent statistics show yarn bombers to be the leading threat to national security. Do you need any more proof than this?

Brimming with newfound confidence (based on my heroic handling of the yarn bomber incident) and greedy for more, I ventured even further out from my mechanized womb - to the James Drive Studio, where a special guest star was scheduled to add a touch of finesse to our mouthbreather-level recording project. We'd been hearing about a female vocalist, name of Murphy, who drives a '64 Chevy fleetside pickup. I spotted her in traffic, signed her to an exclusive contract at a stoplight, and now it was time for her to earn it. Tricia Murphy was waiting outside the studio when I arrived. She requested a glass of water, sat to drink it, walked into the studio and directly up to a waiting microphone. Murphy twirled her finger in the universally accepted "Go" sign, and the tape rolled. In one amazing take, she nailed every note, dismounted, and stuck the landing. She hasn't been heard from since. But we now have a dash of culture to juxtapose the otherwise primal din on one cut of the album. Thanks, Tricia. 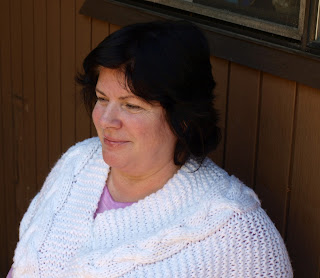 The Celtic Songbird, praying for my camera to spontaneously combust while digesting a glass of tepid tap water. This could well be the only photograph of Tricia Murphy. The hand knitted sweater gave me chills. You don't suppose... 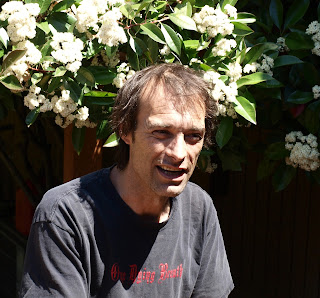 This image of producer Rob James is to silence critics of my breakthrough "dark mystery" photographic technique. You're welcome.

Walking among mortals is healthy and all, but I have things to do. So I scheduled an appointment with Dr. Lockjaw, at the Custom Metal clinic. He lets me play with my Model A project, after office hours. Doc says I'm responding well to the therapy. This is my reality. 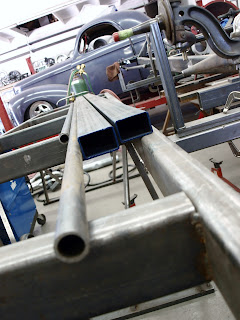 To refresh your memory, we began with two lengths of 2 X 3 rectangular tubing for frame rails, and a couple of 1 1/2" round tubes for crossmembers...

... Cut them to predetermined  lengths, allowing tight formation to the body lines... 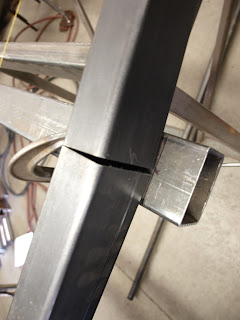 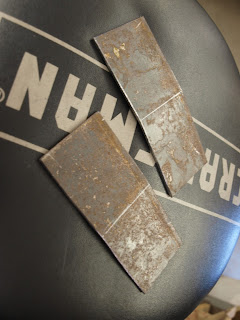 ... Tacked internal supports into the junctions... 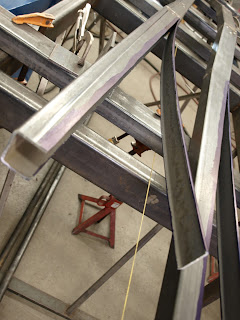 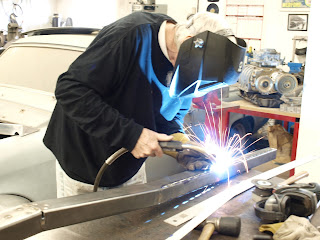 ... Tapered the front ends of the rails to affect frame horns... 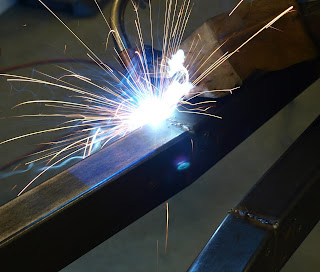 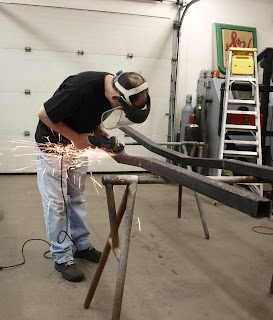 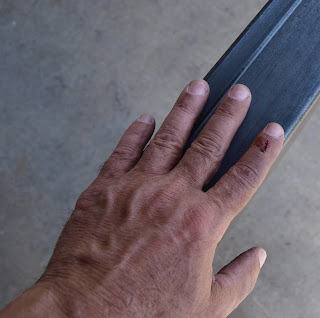 ... Finish-welded the rails and ground those welds down... 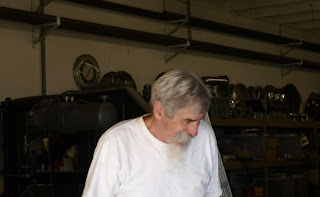 ... And this week, while I bask in decadent leisure, Doc is waving his magic sander over the rails to make them appear as one-piece units: "No fill, just skill." Yes, he really is magic. Ask anyone...

Next week, an explanation for this: 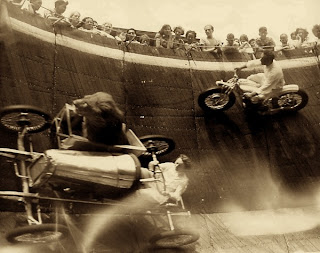 Posted by Scotty Gosson at 8:22 PM No comments: