THE CURSE OF THE LIBRA 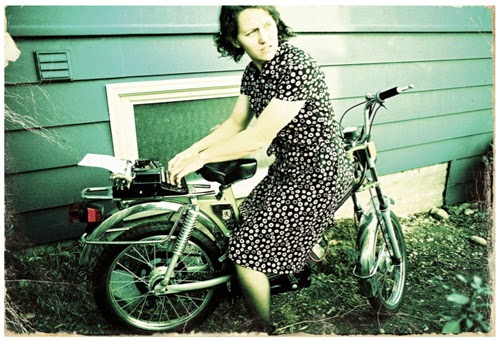 A typical Libra. There is no right or wrong way to haul ass toward a deadline. But it probably helps to know if you're coming or going. I wouldn't know about that. (Photo courtesy of Jim Lindsay)


Woe be the hapless Libra. Tirelessly devoting equal time to both sides of any story, we Libras pay an excruciating price for our bipartisanship: The burden of an inherent and crippling character defect, known to the medical community as "Indecisiveness". This malady explains the loneliness of the Libra. No one wants to go to the parts store, burger joint, or anywhere else with someone so easily overwhelmed by the simplest choices. That's the stereotype, anyway. In reality, Libras are... well okay, I guess they're stereotypes. Cliches, even. Okay, not exactly cliches, but definitely typecast. No, wait - only thespian Libras can be typecast. One could argue that Libras are born in as pure a state as anyone - free of labels such as astrological signs - yet are expected to passively accept the world's preconceived perceptions of them, based solely on their birth dates. In that sense, Libras are absolutely victims of a herd mentality-based society comprised largely of non-Librans. Conversely, any Libra is free to choose whether (or not) to buy into such classificationism.

So today, I take a stand for a new Libraism. An evolved Libra, focused and decisive, who is clear on what he (or she) does (or does not) want (or need). Exhibit A: I do not want to work another day under deadline conditions - I need some rest. Of course, I also want to get paid - Mr. Landlord is losing patience with me. Screw the new Libraism. These choices are paralyzing.

Fine. I should probably go back to work, but something has to give. So today, I guess it's going to be the blog. This post will be short but sweet. Abbreviated. Succinct. To the point. Direct. Concise. Blunt. Brusque, even. And discursive. Heavy on the discursive, for sure. 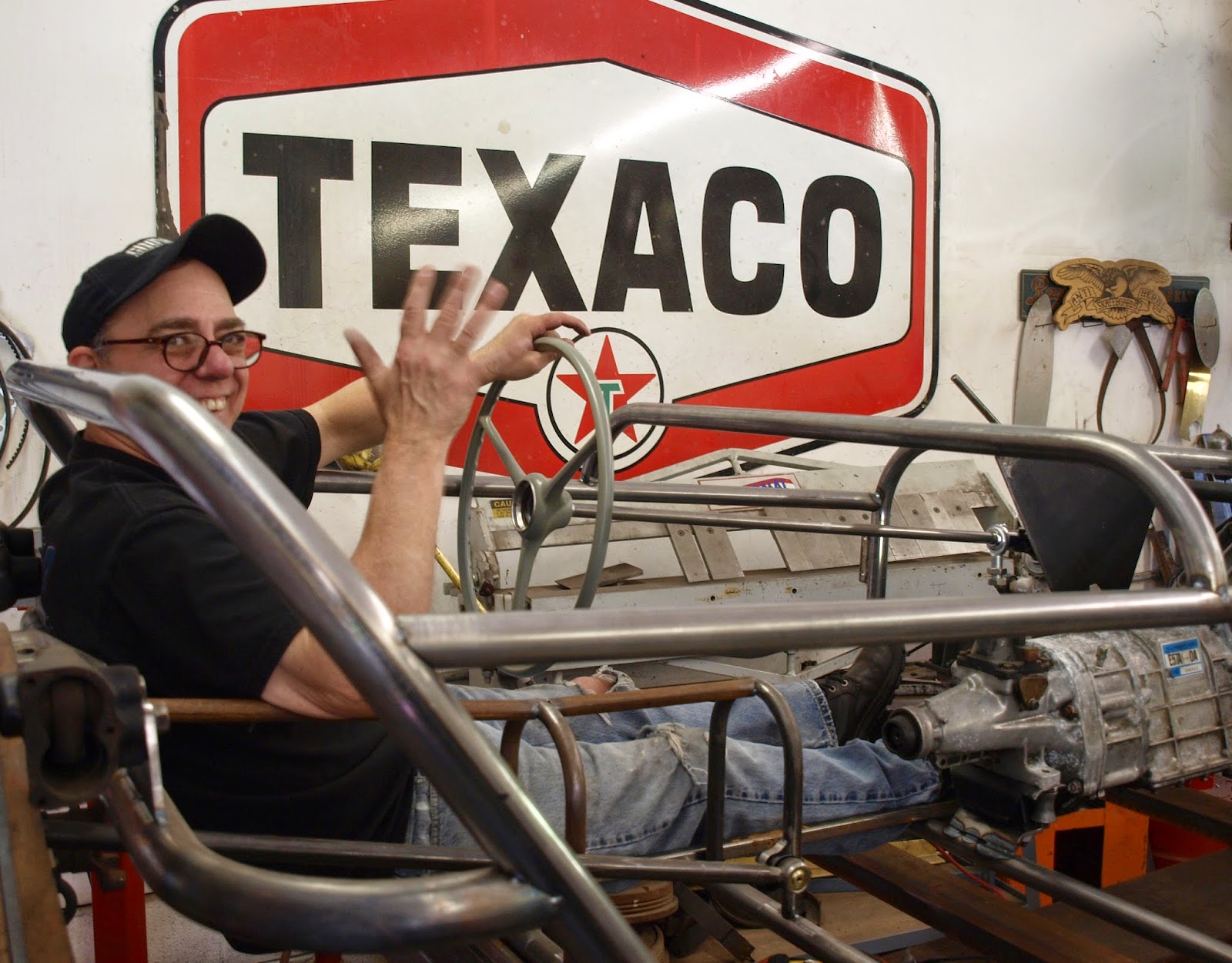 See ya 'round, leakers! I'm off to Fantasyland. Nineteen years after starting this project, we finally slid the test dummy into the car! You can send those congratulatory cards and letters to General Delivery, Scottyville, USA. (Photo courtesy of Dr. Lockjaw) 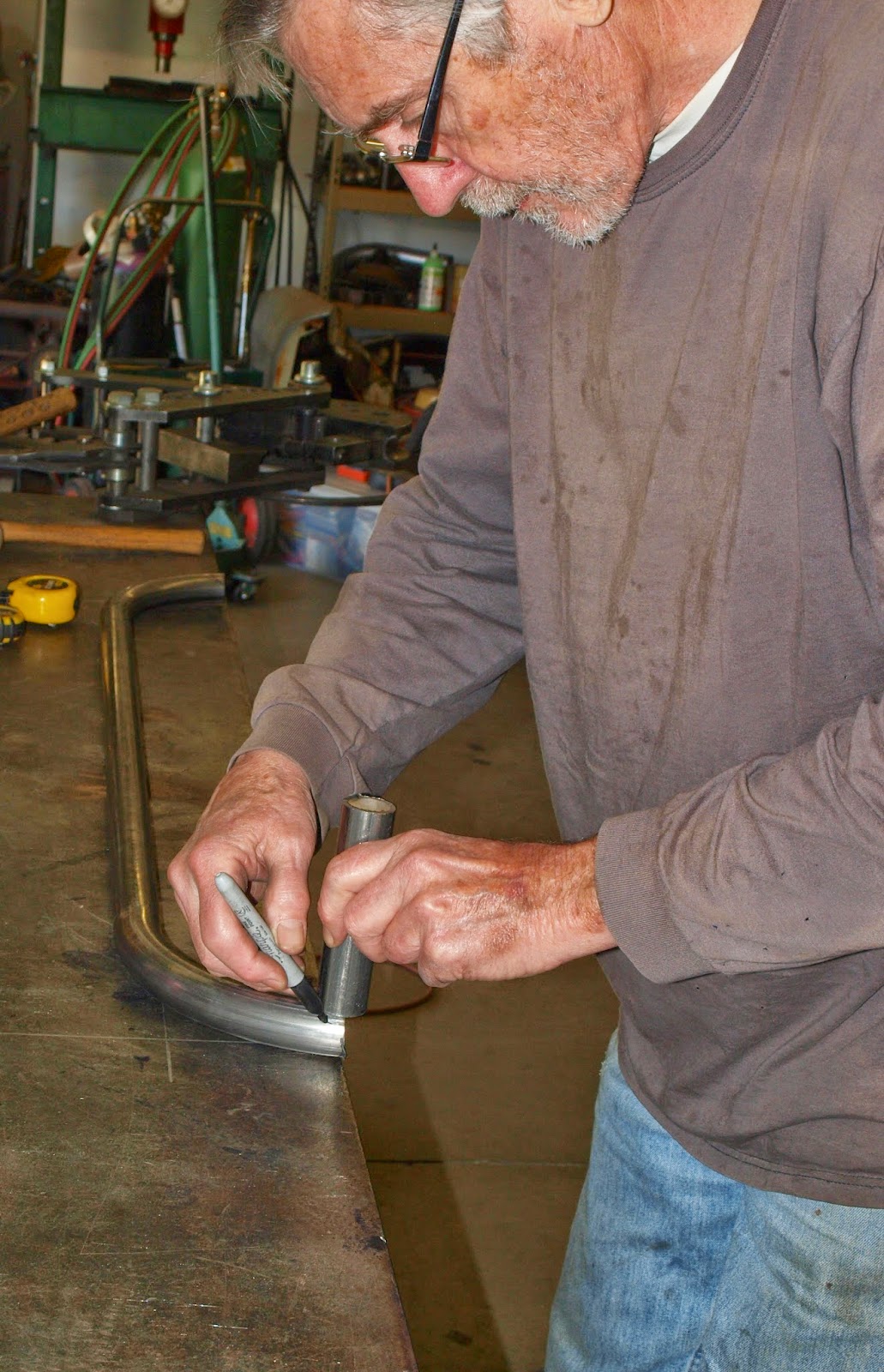 Last Sunday at Dr. Lockjaw's Custom Metal shop, we made some hard decisions that determined the course of this project. First, we finally decided on floor-mounted pedals, which dictated an overhead steering shaft support (long story, that). I cut a length of 1 1/4" tubing, which we bent up in Doc's hand-crank tubing bender (in background). Doc is marking the ends for fish-mouthing here, which was performed with hand grinders, just because neither of us were up for walking clear across the shop to get the tubing notcher. Handy tip:Energy conservation is key to efficient fabrication. 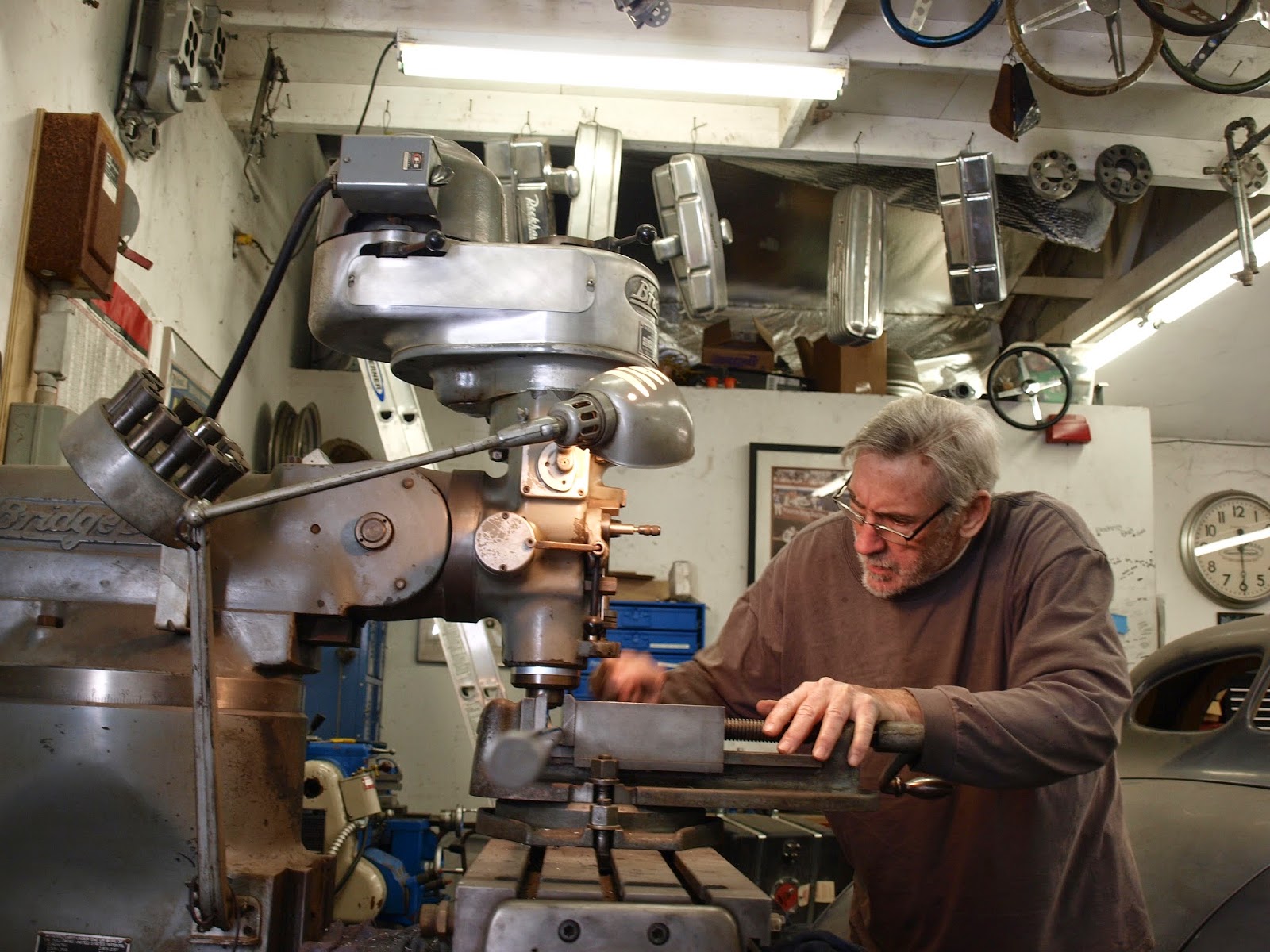 Then we decided to mill flats on a length of 3/4" solid cold-rolled rod that I scored the other day for a steering shaft. Doc cranks up the Bridgeport and proceeds to spoil me rotten (I've been around them for many years now, but mills and lathes still strike me as exotica). Of course, I'm impressed with any shop that has electricity. 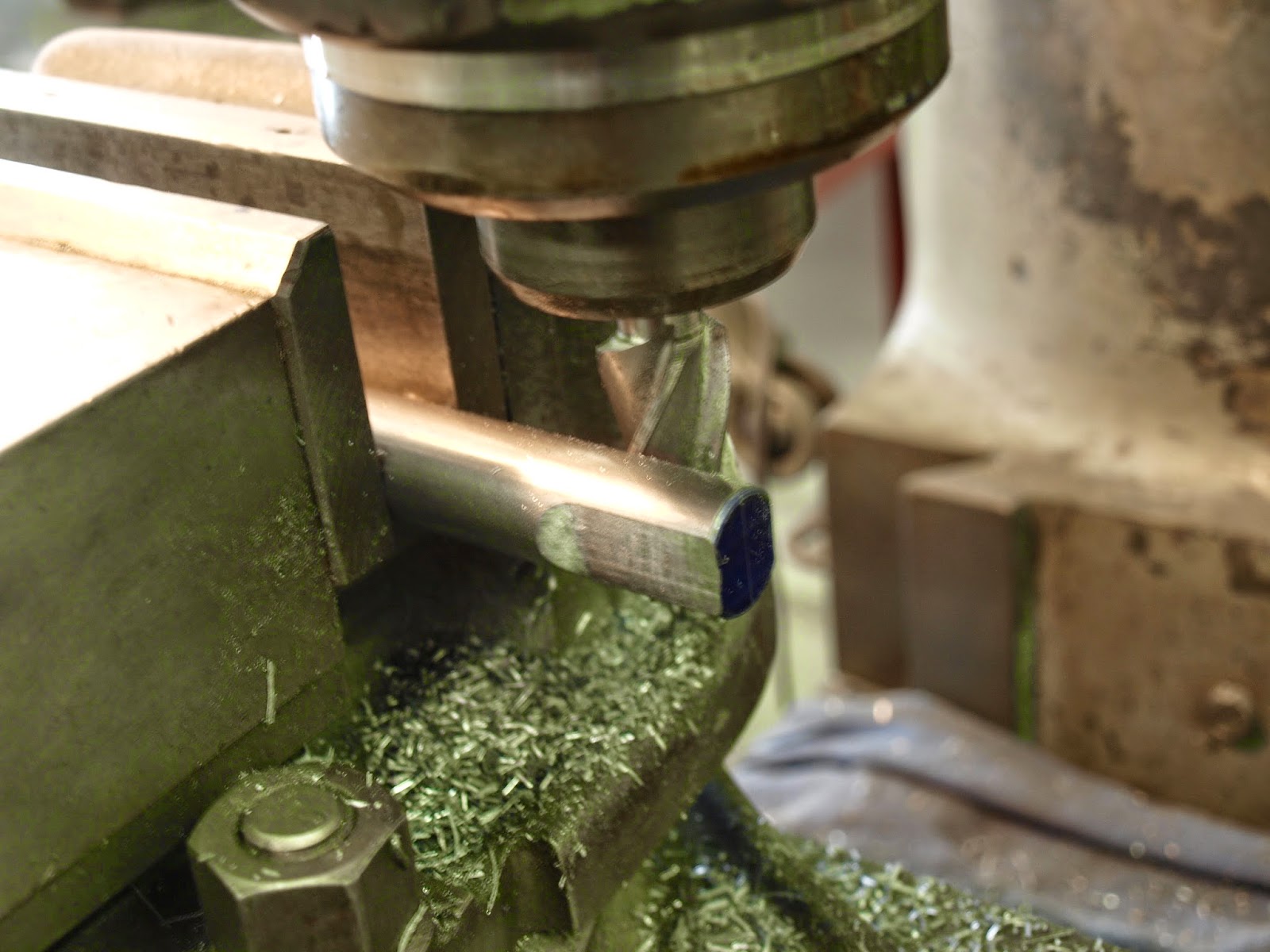 Doc Dykemmed the end of the rod, found the center, and scribed the approximate cut depth. Final sizing was achieved via trail-and-error fitment. 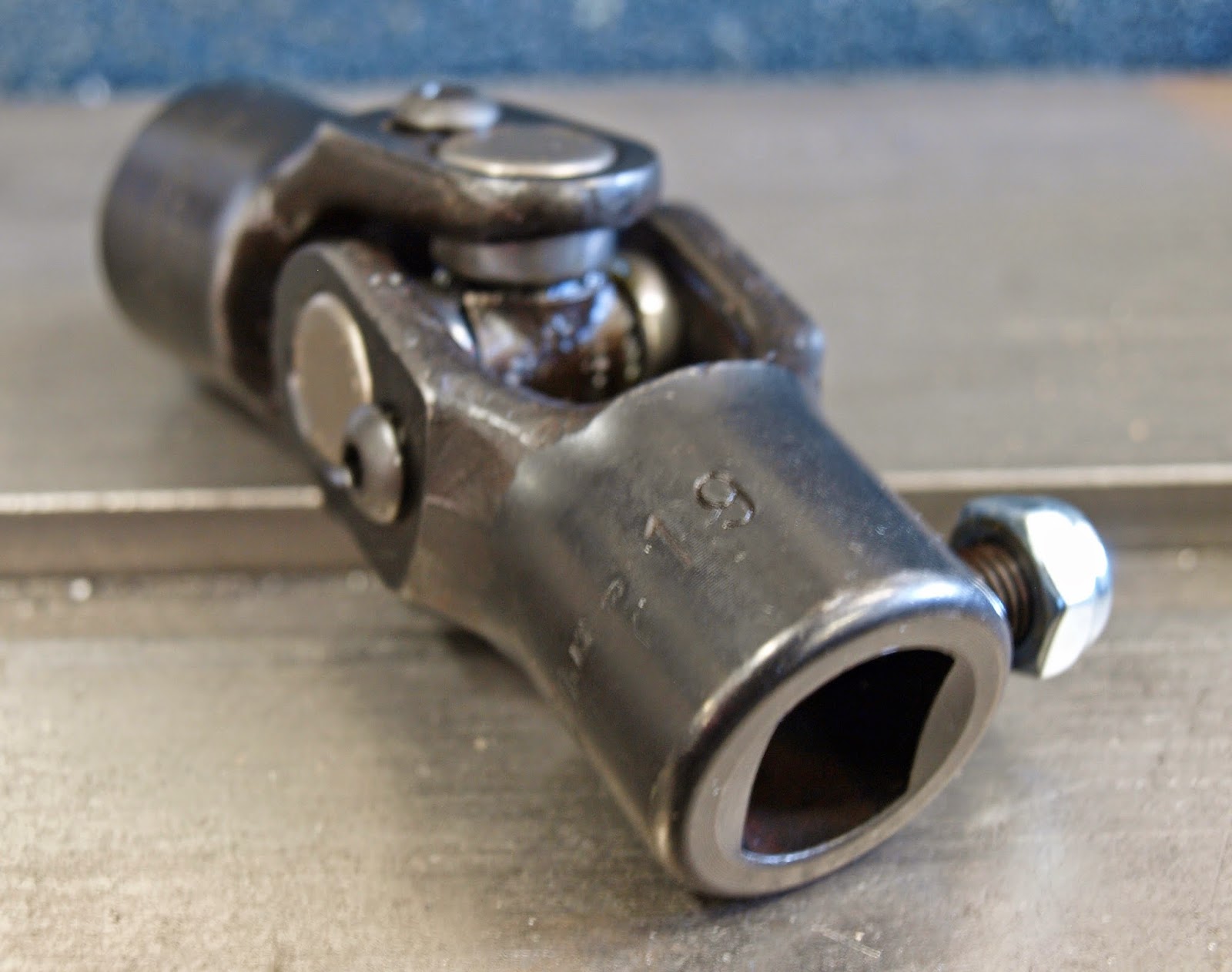 The shaft will slide into this steering u-joint. For my rare and treasured non-fabrication friends, this opening is called a Double-D style. The other end of the u-joint employs a female-splined opening to match the male-splines on the steering box. The stud at right of the Double-D end will thread into a detent in the installed Double-D shaft to positively lock the assembly together for safety, then the locknut is tightened to hold the stud in place. Make sense? During this step, it was decided that I should put more effort into shooting photos in focus. I'll make that my next New Year's resolution. (I'm lying). 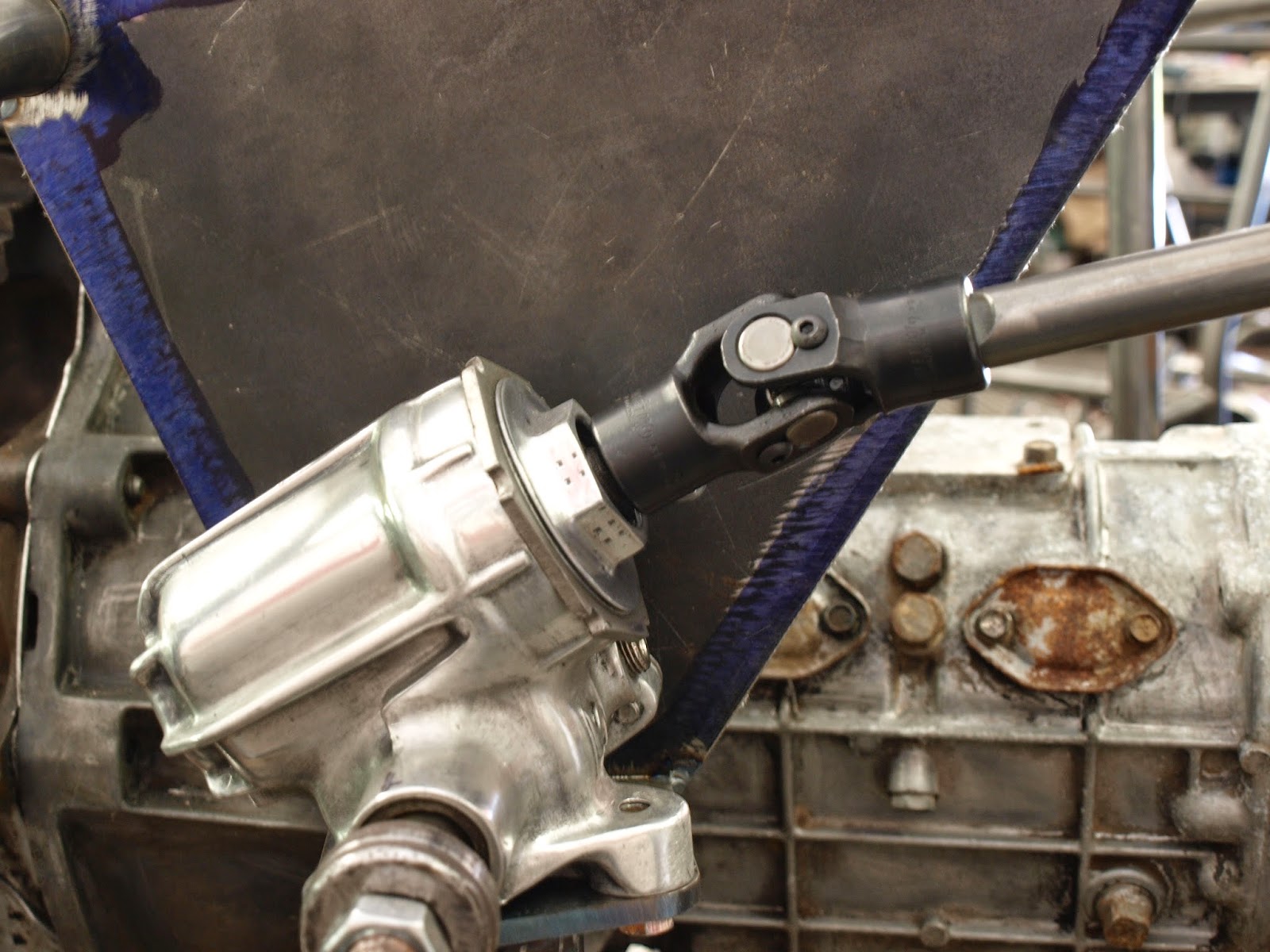 All of the pieces coexist in harmony, and u-joint angle is acceptable, if a bit more pronounced than I had hoped for. The fix is to aim the shaft skyward, or re-mount the steering box. Like I said, the angle is acceptable. At this stage, we decided to go to lunch.

After a lunch that couldn't be beat, we found a cast-off piece of square tube in the trash can and turned it into a steering shaft support bracket. We decided to do it the old fashioned way, so you won't think we're getting all uppity with the mill. Note: Hand model is experienced professional. Do not attempt. A nanosecond after this shot, I was fashioning a tourniquet from a greasy shop rag, but sadly, got no photos of it. 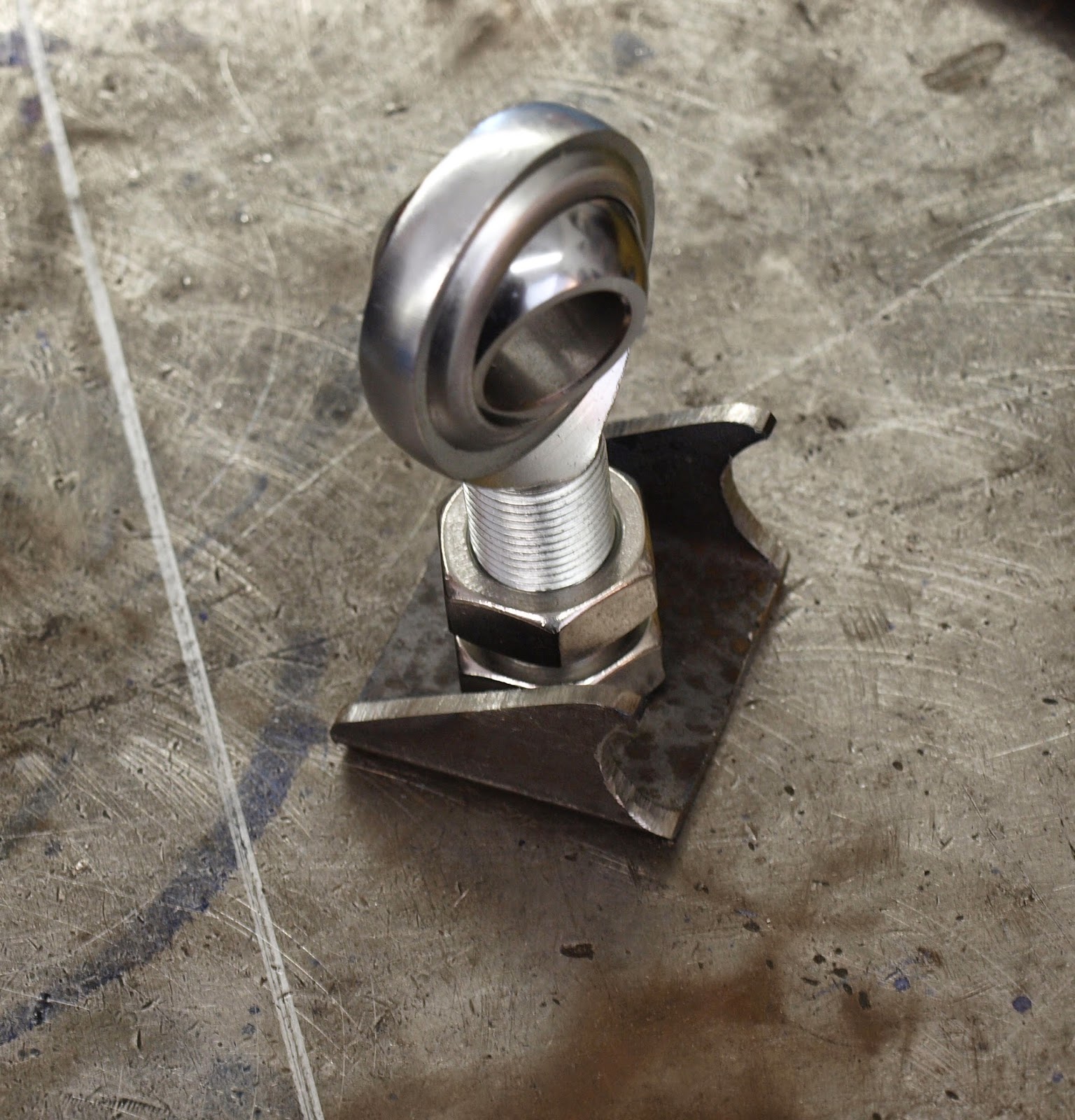 After applying the tourniquet to Doc's severed wrist, we ended up with this bracket to mount the jumbo 3/4" heim joint, which will hold our steering shaft... 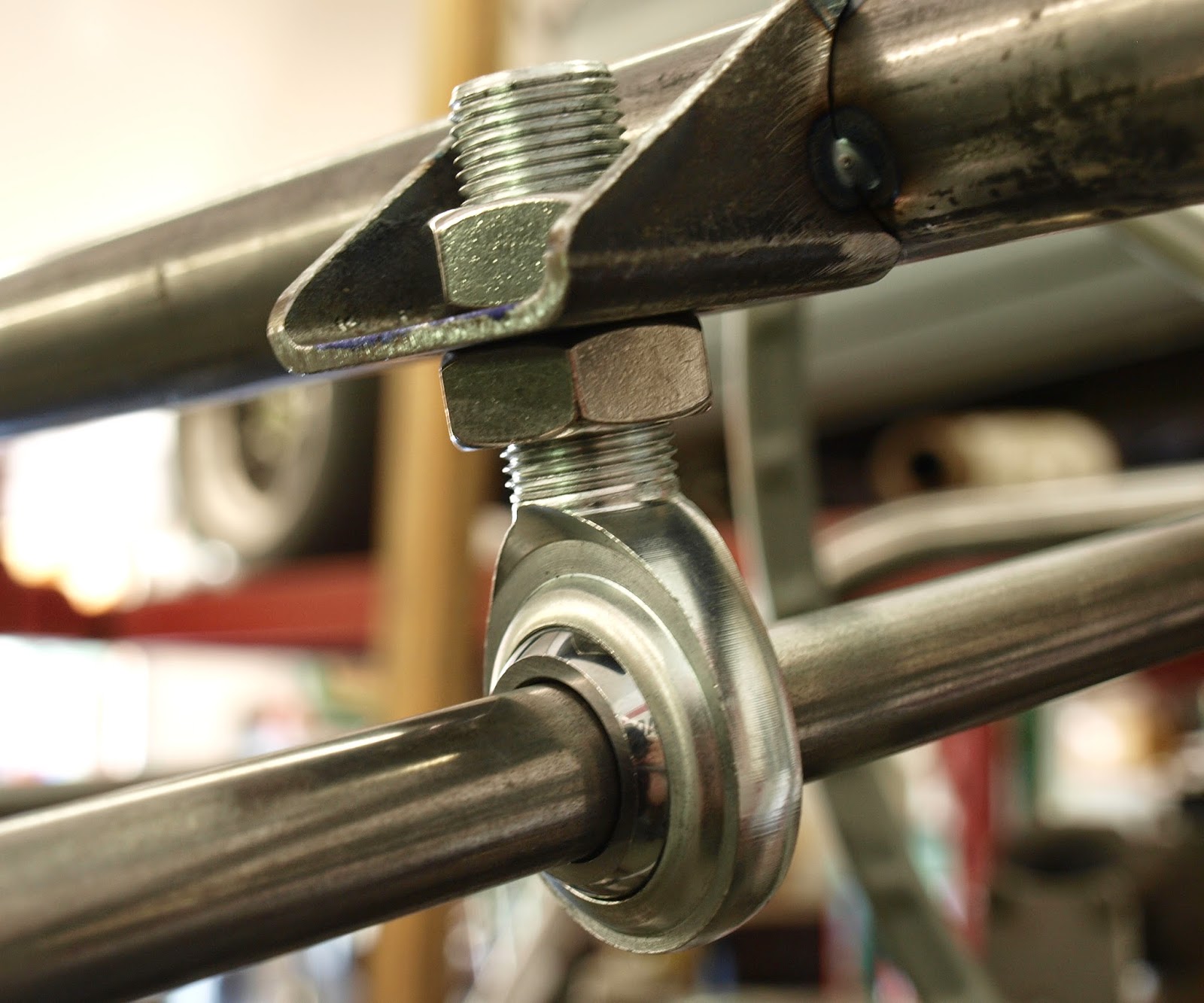 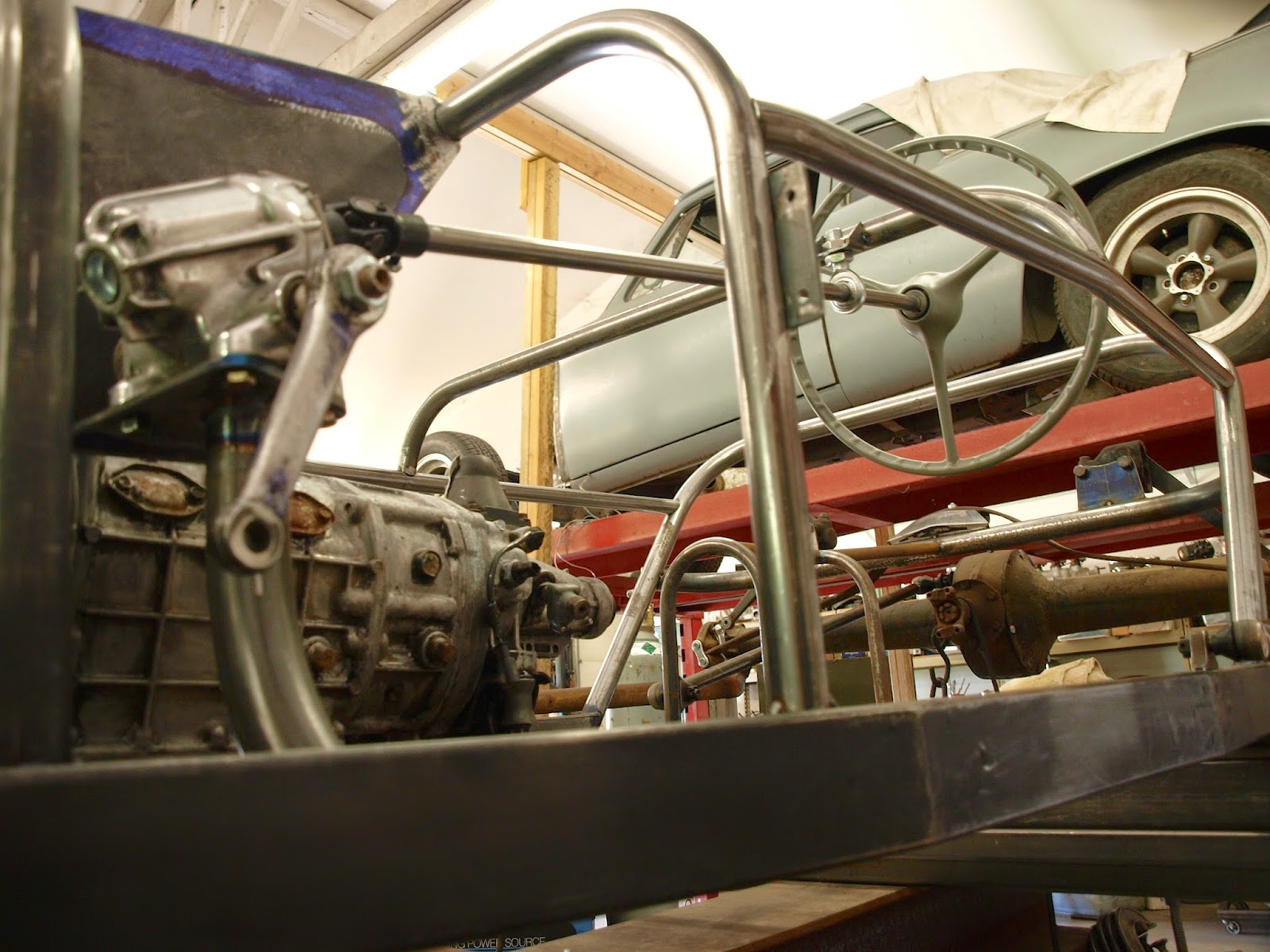 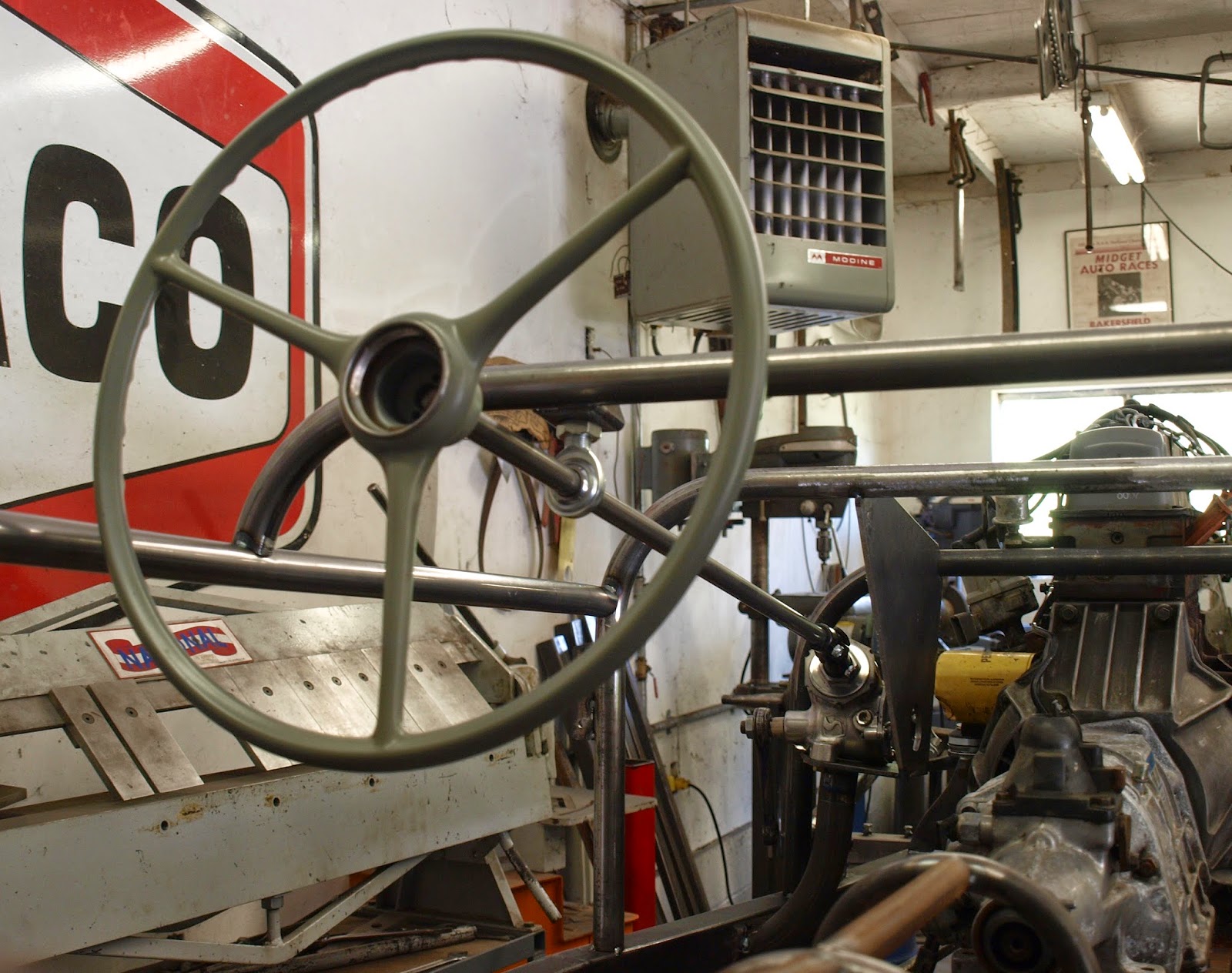 We crowned the shaft with a crusty old '37 Chevy wheel that I semi-restored, and presto! The dots are now connected. And that's all there is to assembling a steering shaft. Next week: Back to the previous week's goal of fabbing a drag link and tie rod. If Doc's wrist is functioning by then. 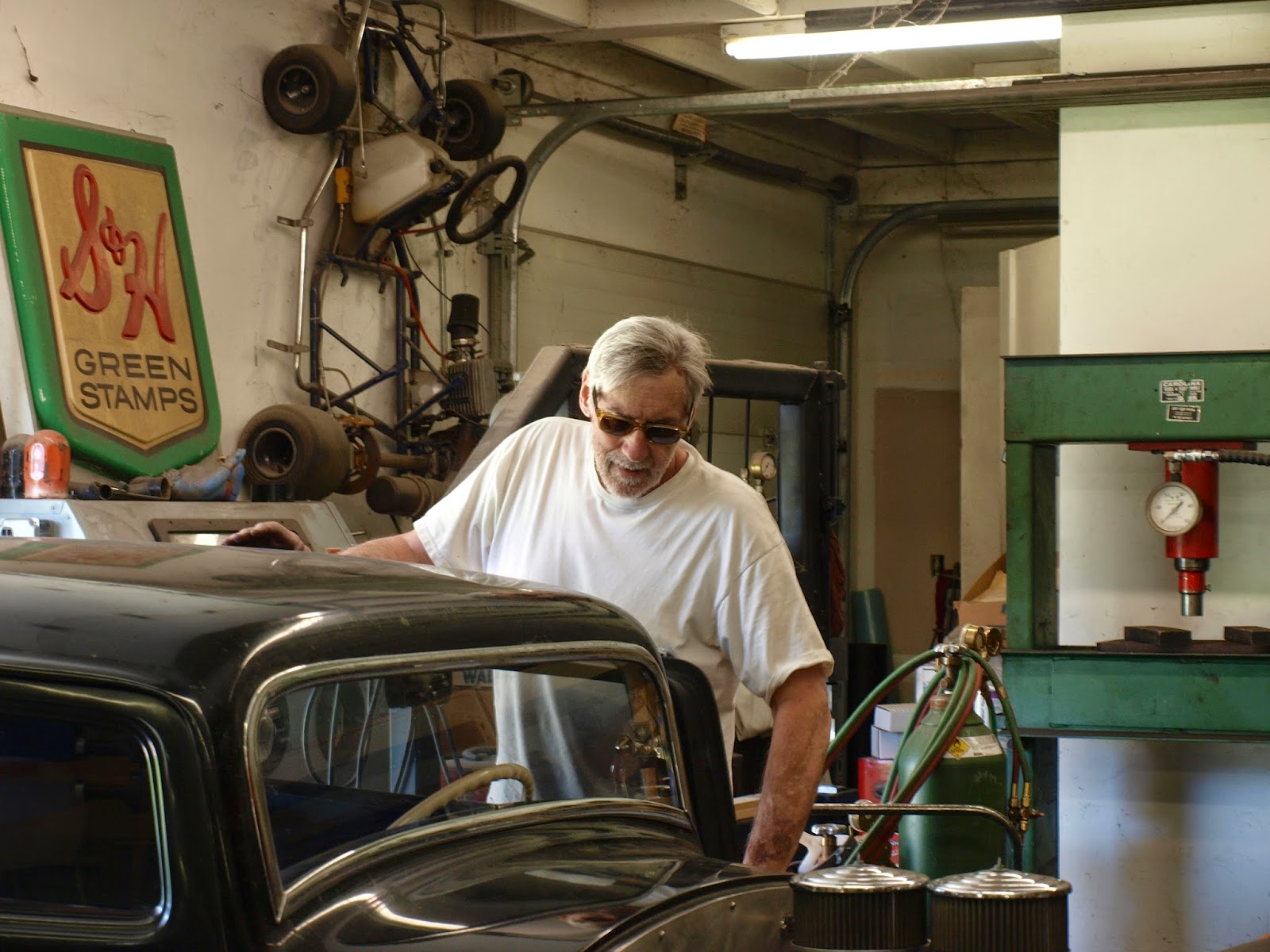 With that, Doc decided to squirm into his Deuce and fry rubber to Three Rivers Hospital in Grants Pass. I haven't spoken to him since Sunday, but he's probably doing just fine. 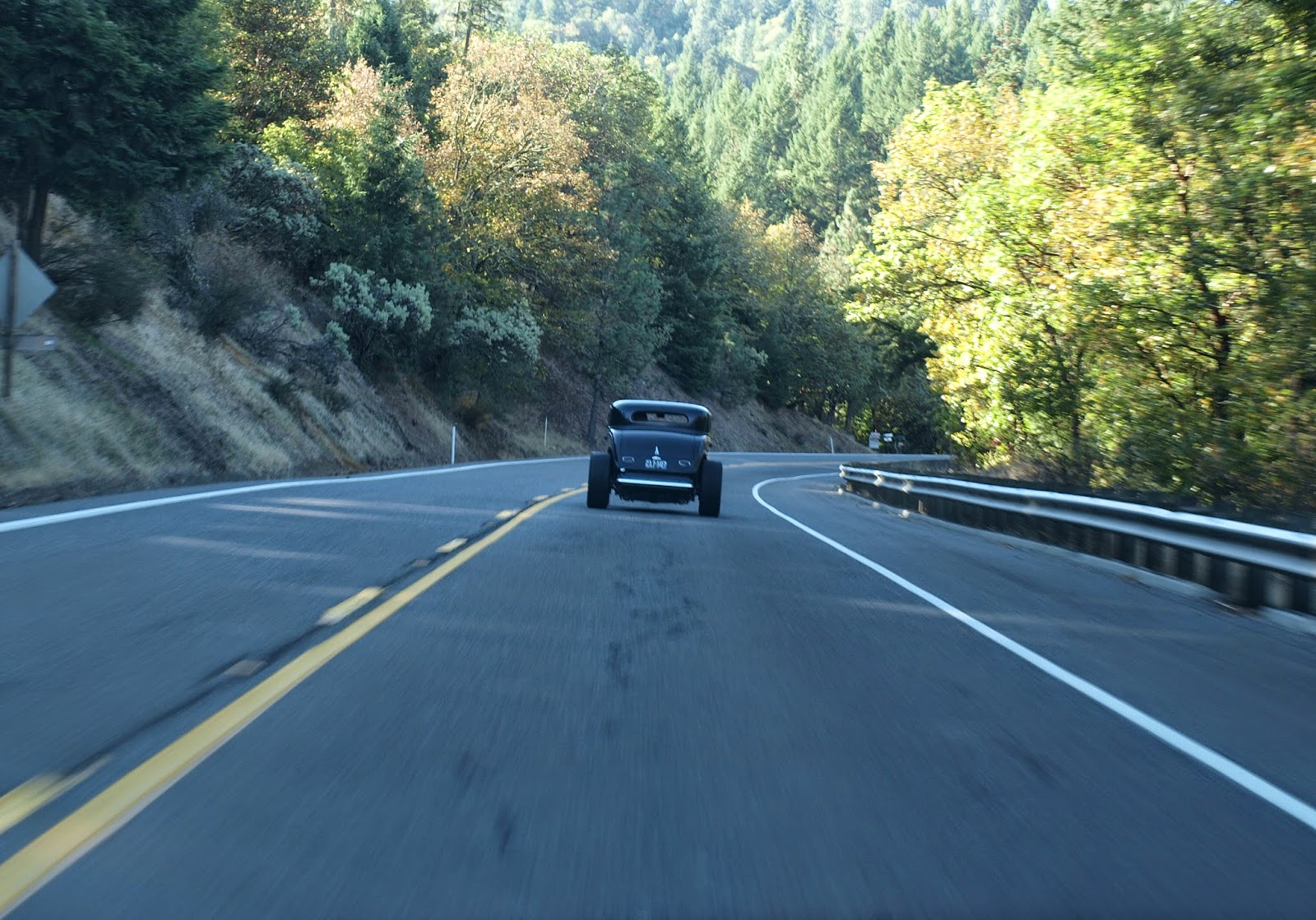 The last I saw of Doc. Piloting the coolest ambulance ever. Siren courtesy of Cragar 4-71.  (Scotty shots) 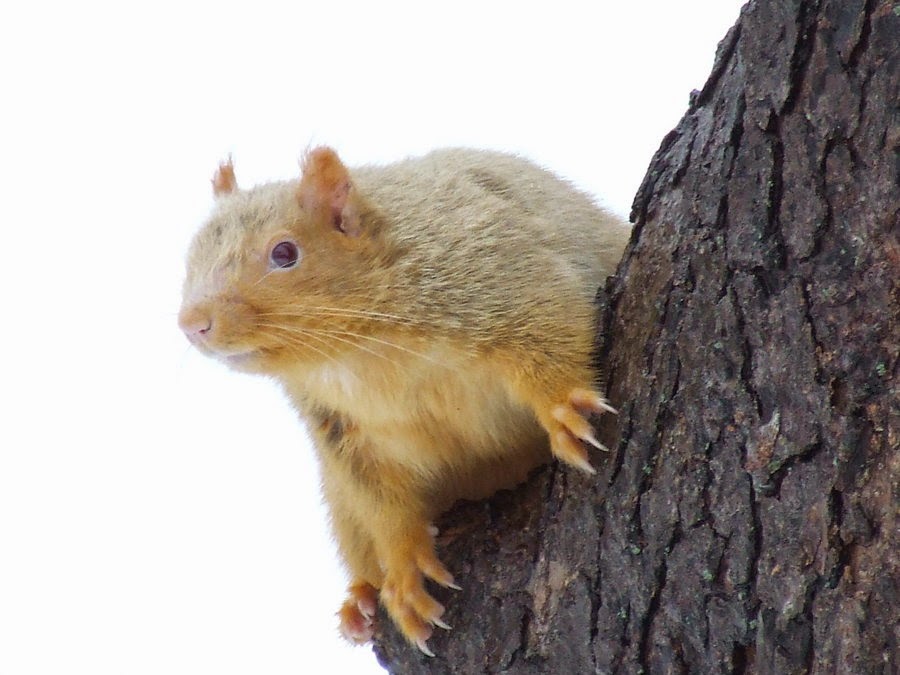 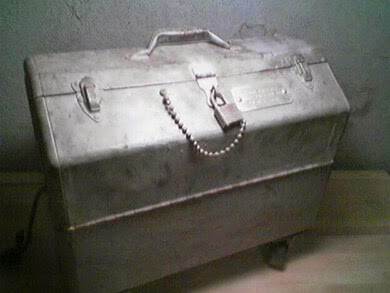