TEMPORARILY OUT OF SERVICE!

Due to pressing multiple deadlines, this week's blog is brief. Thank you.

Here's a picture of a car: 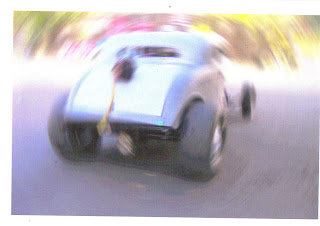 In other news, my longtime friend and bandmate Lyle Miller passed away this week, at 96 years old. Lyle hosted a very popular bluegrass radio show in Iowa, in the 1940s. After serving in WWII, Lyle and wife Fern drove their '28 Chevy coupe across the country, in search of greener pastures. They didn't find anywhere they liked as much as the Iowa/Nebraska region, so they bought a house down the street from Bill and Charlie Monroe, in Omaha. I began jamming with Lyle in 1977. He joined our band (Bluegrass Playground) shortly after and never left. His gratitude for the gift of music was contageous and never wavered. His humility and honesty continue to inspire me. Lyle was a father figure to me. 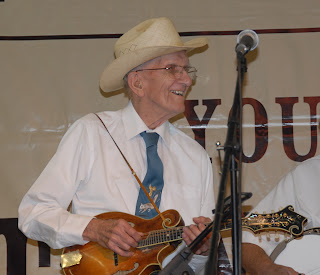 This was during our last performance - a 2009 festival in LeMars, Iowa. Photo by Marylin, wife of our late bass player, Dick Zion, who passed a year after this show. Banjo player Danny McElroy and myself are the surviving original members. Handpainted neckties were our trademark. The squirrel on Lyle's is an inside joke between us and our audience.

Godspeed, Lyle. If I see Grisman, I'll see about getting your Loyd Loar Gibson back to Fern...

And I'll see you guys soon. I'll try to post something on here next Tuesday (but no guarantees).

Scotty
Posted by Scotty Gosson at 2:43 PM No comments: