Of Sex and Race on the Quarter Mile

Tis the season. Family and friends are risking life and limb over icy roads, enroute to holiday social gatherings – a painful time for people like me, with the social skills of a fence post. It gets worse when the chit chat starts: “And what do you do, Scotty?” When I explain that I work in the hot rod world – with a focus on drag racing – I get a lot of this:

“Really? Jeez, you don’t come across as a redneck at all. Sorry, but you caught me by surprise there.”

“Well, are you maybe thinking of stock car racing? You know, like NASCAR? It evolved from moonshine runners, and…”

At this stage, I point out some notable women and minorities they may have heard of who’ve made their mark in the sport, but we both quickly realize I’m citing exceptions, novelties, tokens even. Ultimately, I concede that not much has changed in motorsports since it began. In this predicament, racing seems one of the last outposts of chauvinism and somehow remains socially acceptable on a limited, stagnant level.
Trapped in a living room cluttered with Christmas decorations, tweed and Birkenstocks, it hits me: Say what you will about Wally Parks, but his tireless efforts to change public perception of drag racing from hooliganism to professional entertainment feel forlornly fruitless at times like this. Desperate for answers, I look out the window and see my primered street/strip car in the driveway. Have I helped to destroy sixty-some years of Wally’s hard work with this noisy throwback machine that screams “danger” from every angle? It probably looks pretty threatening to Mr. and Ms. Middle Class.

What makes this all the more frustrating to me is knowledge that more women and minorities than ever are earning engineering degrees, following their passions to personal golden rings, and setting their own reservations aside to truly blend into the melting pot. They’re more accepted and respected than ever, in every facet of society. But we’re not seeing many of them in motorsports. Are they just too smart to step into a situation where they’re clearly outnumbered? The more relevant question is why are they so outnumbered?

Wow! Get this: While writing that last paragraph, I was distracted by raised voices on my TV:
A  roundtable of African-American sportscasters and athletes on ESPN were debating upper level sports management practices, but all agreed that the true face of any sports organization can be judged by the diversity of its Board of Directors. They said one look at the makeup of the Board tells them at a glance whether an organization will give them a fair chance to succeed. Hmmm…

With current pro-level stars like the Force sisters, Erica Enders, Antron Brown, and Hector Arana Sr. and Jr., NHRA’s collective butts are covered – until someone questions why these individuals stand out so much from the herd. Obviously, they’re awesome racers, and are equally obviously poles apart from the established status quo. That’s a can’t-miss combo for exploitation, but what message is delivered to potential non-white-male racers/fans, looking in from the outside?

In the Sportsman trenches where I dwell, there are no such distractions from the truth (the “Sportsman” tag itself being a red flag to some). Our women tend to be mostly wives or girlfriends in vital but supportive roles. The few women I’ve known who come to drive (even those with Junior Dragster backgrounds) enter with trepidation. For what it’s worth, I do my best to chat them up and make them feel welcome and equal, but the majority of these women don’t stick around for long. Those who do are – well, exceptions. Maybe the others snuck a peek at NHRA’s Board of Directors and didn’t see anyone they could relate to. Who knows? They’re gone now, and not talking.

I’ve heard it asked if maybe some people carry in their own baggage that prompts negative reactions, even on a subconscious level? Of course, that works both ways: One of my racing buddies in the Midwest was a black guy with a contagious passion for the drags that completely overshadowed any cultural differences between himself and fellow racers. If he ever had any baggage, he checked it at the gate. And I've never heard any white guys say they were made to feel uncomfortable at Brotherhood Raceway. Unfortunately, I never made it down there myself.

All I know is that when grilled by the general public on the issue, I feel at a loss for an answer convincing enough to erase their image of drag racers as Dukes of Hazzard cousins. And all I want for Christmas is your feedback in the COMMENTS box (below). Am I making a mountain of a molehill here? Stirring up trouble that may hinder actual progress? I’m jingling my Salvation Army bell for your two cents… 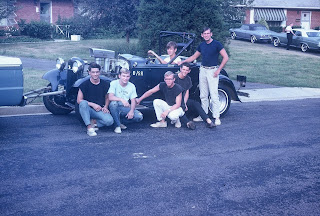 Jerry Shalestock (at the wheel) and company, headed to a Maryland strip for their first shot at B/Street Roadster class racing, with a smallblock Chevy replacing the previous flathead Ford in their sectioned Deuce roadster. How much has drag racing changed since this mid 60's photo was taken? It depends on your perspective. How much have YOU changed?
Posted by Scotty Gosson at 10:17 AM No comments: