DRIVING INTO THE FORBIDDEN TIME ZONE WITH A ONE-HIT-WONDER 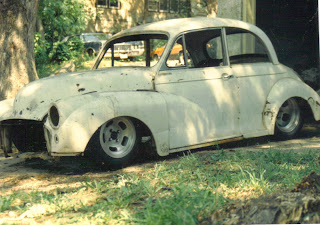 Initial mockup of major components in my rented, dirt floor, organic (no electricity), windowless, Model T-sized garage, circa 1985. There was absolutely no room to work in here, but I was inspired. Soon after, I moved into an actual house with a 1 ½ car garage, where the car was built. My only regret is spraying flat black (from my brother’s vacuum cleaner) over the original patina’d off-white paint.

The Foundations invaded the Top 40 with their 60s R&B classic, Build Me Up Buttercup. Those guys probably recorded dozens of other songs that they felt showed their chops in a better light, but Buttercup was the one tune that fans demanded night after night on the road. Poor guys. Imagine their frustration. Such is the blessed curse of the One Hit Wonder phenomenon.

Triviod: The Foundations were from:
A: Los Angeles
B: Detroit
C: New York
D: London
If you answered “D”, you’ve likely won a few trivia contests with that little gem. Congrats!

Although I’ve built several cars over the years, the ’61 Morris Minor known as Son of Godzilla is the one I’m known for. Most people tend to remember over-the-top “look at me” cars better than tasteful builds. But the Morris was just one of many dollar-to-horsepower/power-to-weight ratio exercises I’ve done. The goal was a fun street/strip car on the cheap, and it was accomplished with mucho help (and lots of laughs) from many friends. When the economy caught up with me in 2008 and I could no longer care for the car, my northern Oregon associate “CC” took custodianship. It’s in good hands and remains largely unchanged today.
While searching for elusive files recently, I came across these images that triggered memories of some of The True Adventures of Son of Godzilla. The photos are really sketchy, but the tales are priceless, to me, anyway.

Midnight Rendezvous with Certain Death at the Friday Night Drags 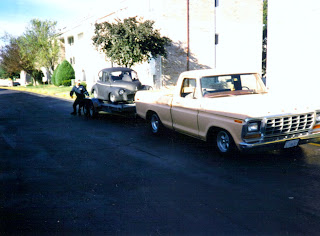 On this night, we borrowed a trailer (from the late Eric Janke – local hero and good friend) and pulled it with Wayne’s 400 Pontiac-powered F-100. The Morris was running a single 4-barrel on an essentially stock junkyard 400” SBC at this time.

When Lil Z first hit the strip, guardrail-to-guardrail 13s were all it could muster (the 86” wheelbase may have been a factor). After some trial and error, I began to get a handle on the chassis and was soon flirting with the elevens. Breaking into the 11 second zone turned out to be a tougher challenge than anticipated, but we finally did it in grand style.

My brother Wayne (who helped me build the car and did most of the welding) met me after work on this infamous night and we hooked up to his Ford pickup and towed out to the local track (which shall remain nameless) with a borrowed trailer, “Just in case.” This ¼ mile track sat in the midst of expansive cornfields, far from the nearest humans, often running late into the night.

I was only a couple of tenths shy of the eleven second holy grail when a cold front moved in around midnight. These were rare conditions and I intended to exploit them to the fullest. But the tune was already at the ragged edge and all I could add was more pressure to the throttle pedal. I did just that and launched hard enough to pop all four Dzus fasteners holding the decklid on. But the wires to the license plate light held good enough to drag the lid behind me all the way down the track. I knew it was on a good run and I gave it full foot through the lights. That’s when the banging started - a deafening thrashing from under the floor, threatening to knock my right leg off of the thin aluminum tranny tunnel. Then I realized I was skating on oil at 120+, with slicks. I finessed it through the traps and eased out of it until I could safely slide to the edge of the track.

I got out to have a look and was prone under the rear of the car when I heard the next pair coming. It didn’t take me all night to hightail it into the corn, where I watched both cars barely regain control after racing through my slippery mess at full speed. They didn’t hit anything and rolled away on the return road. That’s when I realized my flat black car was invisible on the dark shoulder. It was about 100 feet to the nearest shard of light. I hand pushed the car as far off the track surface as I could and flashed my brake lights at approaching cars (slowing them down somewhat), but they kept on coming. I sprinted through the corn to the tower and alerted the track officials. They explained that it was already past midnight and they were desperate to run off the remaining cars in the staging lanes before they could close the gates and go home.

Somehow, none of those cars (or motorcycles!) hit mine, or crashed on their own after driving over the fluids I’d dumped on the finish line. Not long after the final pair slid past, an official arrived in a motorized cart. He told me to get in the car while he hooked up a tow chain, which I obediently did, only to watch him drive away from me. He had hooked his chain through the paper thin tin grille bars of the Morris and driven off, dragging rare grille parts behind the cart. He eventually realized his mistake and returned for a second try (I supervised this time, ensuring he connected to the front crossmember). He towed me to the pits, we loaded the bloody remains on the trailer, drove back to town, and secured the car in my storage unit.

The next morning, I jacked the car up for a look underneath. The driveshaft hoop had done its job and I was surprised to find the driveshaft in perfect health, from end to end (all 26” of it). I unbolted the trans mounts and the Powerglide fell out in two pieces – broken in half. This led to a new trans build (using quality parts this time – live and learn). Bottom line: The only serious injury was to my wallet. No track personnel were fired. No harm, no foul. And I was now driving an official eleven second street car. At that point (1988ish), elevens were still a big deal, and I had well under $5,000 in the three year build. We celebrated with a trans rebuild and set our sights on ten seconds. That actually happened sooner than expected, but is another story for another blog entry. 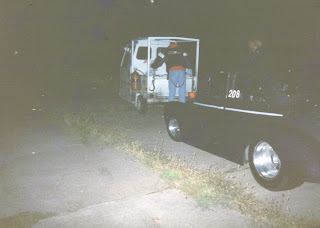 A track worker (who will remain anonymous) puts the hook on Lil Zilla. He made off with the only unmolested grille bar I had. 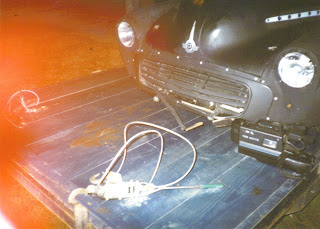 Wounded warrior on the stretcher. We couldn't find a tourniquet large enough to deal with the omnipresent trans fluid, but the engine and rearend seemed okay. Note vintage videocam - we were (sadly) way too hip for still photos… 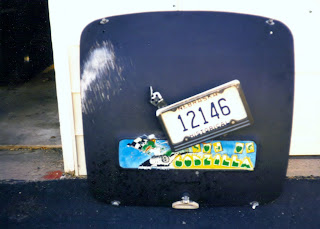 The morning after: Decklid hangover. Cool trans fluid graphics. The funky painted graphics (using wrecking yard parts markers) hung around for another year, but the clunky license plate frame was immediately put down, after a one week lifespan. 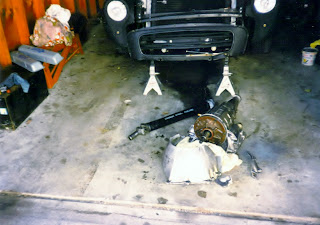 Epilogue: This one car supplied hundreds of adventures and opened many doors that would have otherwise been slammed in my face. Other cars I’ve built (both before and after this one) did the same, were better built, and served their purpose better. Alas, they were apparently too subtle to take root in the average bear’s memory. Believe it or not, glory isn’t my intent. My goal is just to amuse myself while savoring my love affair with the creative process. In fact, it’s utterly bizarre to be “known” for a car, instead of for who I really am. So yeah, in the big picture, being considered a one-hit-wonder doesn’t matter to me.  I believe that if you get to know someone, you’ll find a lot more substance than what they’re “known” for.

Next week: The Continuing True Adventures of The Son of Godzilla! With Full Color Action Photos!

Posted by Scotty Gosson at 5:50 PM No comments: