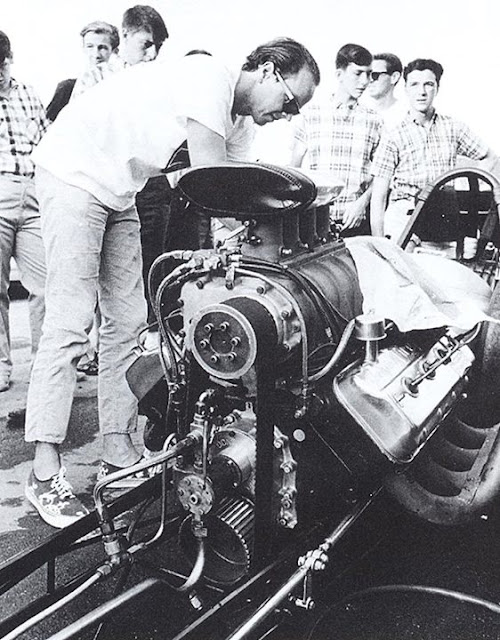 Bob Skinner preps The Surfers AA/Fuel Dragster for action somewhere in America, in the midst of the most improbable-yet-mercurial run of success and hilarity in drag racing history. Bob appears different from the other guys in this photo. There's a reason for that. (Photo courtesy of Bob Higginson collection)

The people that have wandered in and out of my life tend to be an eclectic lot. For better or worse, they arrive from all walks of life - most via providence, some out of curiosity, and several by mistake. More than half are hot rodders of various disciplines. Yet several of my non-rodder friends also read this blog. I have no idea why.

The rodders are well versed in drag race lore. To them, this post will be old news. Ancient history. Except for this latest jolt to our little village at the edge of the real world: Bob Skinner has died.

A brief biography for my uninitiated friends: Bob Skinner and his pals Tom Jobe and Mike Sorokin comprised "The Surfers" Top Fuel dragster team. Drag racing's equivalent of The Beatles, the Surfers were equally charismatic, driven, and (relatively) successful. At turns visionary and pranksterish, they disrupted the status quo with a contagious glee. The Surfers were the Marx Brothers and the Wright Brothers. The exactly right brothers for the time. For the definitive account, seek out "The Epic Saga of The Surfers: The Southern California Exploding Inevitable", by Cole Coonce. The fairy tale ends on the most tragic note imaginable. At that point, Bob Skinner walked away from it all, and reinvented his life in the same fashion that he helped reinvent the very perception of nitromethane combustion theory.

Bob Skinner was found dead under his pickup truck in his California garage last week. His body had been there for three days. There was no sign of injury or foul play. He just died while working on his truck.

I never met Bob or even corresponded with the guy. But I related to him and admired him. I always hoped we would cross paths, but that was not meant to be. Our lives somewhat paralleled each other's, albeit mine has played out at a decidedly more lowbrow level. The following is an example of what we all missed by not being Bob Skinner: 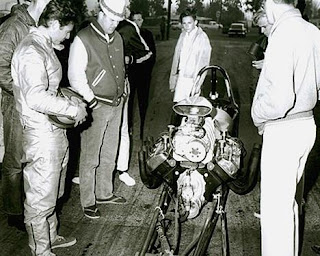 Having windowed their only block in a semi-final round win, Surfer Mike Sorokin can only cradle his helmet and ponder a longer fuse. One that would stretch to the starting line, where his opponent would hopefully foul. What to do? Surfer Tom Jobe (now the lone voice of the Surfers) narrates the fix, below. (Photo courtesy of Bob Higginson collection)

"You may have heard the stories of the Surfers rolling the car over on its side to patch up the side of the motor with cardboard and tape. If so, here are some pictures of that event. Keep in mind that everything we took to the drag strip fit into the trunk of our '55 Chevy. That included fuel, oil, tools, etcetera. If it didn't fit into the trunk, we left it home. We liked to keep it simple so we could have some fun at the drags and not work on the car any more than we had to. When a problem like this came up, it required the help of half the pit area. The team of Gall & Thode put us up to this deal and offered to loan us whatever parts we needed off of their car. Jim Brissette's team and Gene Mooneyham's team offered their help too, so we went for it. 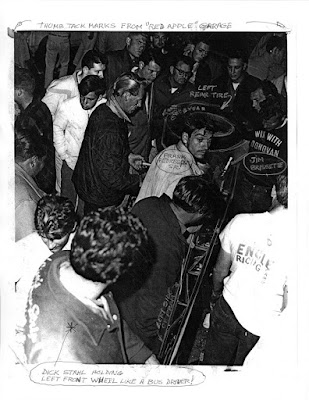 We realized that the only way we could clean up this mess was if we could get the damaged side up, so we could wash it down with acetone (so the duct tape would stick). So we rolled the car up on its side and got after it.

Whenever you needed to know what you could get away with in one of those disaster deals, you went and got Jim Brisette. He surveyed the deal. We asked him how far it would go. He thought for a minute and said, 'A thousand feet.'

We mashed the piston up into the top of the cylinder, put a hose clamp around the journal where the rod used to be, pulled the push rods, taped the sparkplug and wire to ground, put the borrowed oil pan on, then put cardboard and duct tape over the gaping hole in the side of the block. It looked good, so we flopped it back on its wheels and filled it up with 98% nitromethane.

Mike Sorokin jumped in that thing like it was brand new, and we pushed down for the last round. It sounded great on seven cylinders! The thing marched right down the track for a thousand feet and then blew up, just like Brissette said it would. Bob Downey (in the Howard Cam Special) won that final round. We enjoyed that evening, and everyone at the track got a good laugh out of it, too." - Tom Jobe 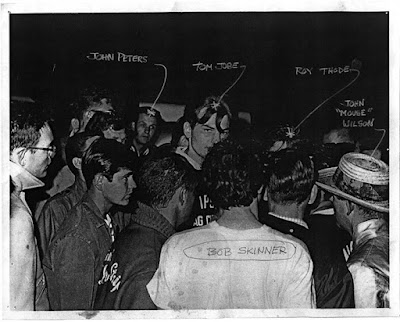 So yes, Skinner was a team player, from his days at Carrol Shelby's shop through his tenure with the Surfers. But Bob the Individual? Here's a glimpse, via one who knew him well, Mr. Spider Razon: 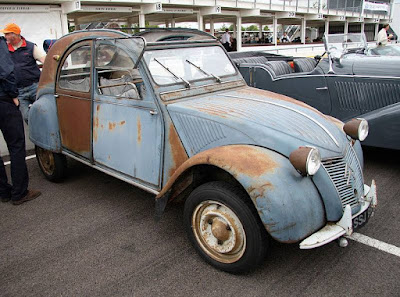 "So Skinner and Jobe pull up in Skinner's half dead Citroen 2VC (I'm not making this up), and state that they were there to pick up two 392" Chryslers. Don Alderson says, 'In that?!' The boys bring out two motors and start to strip them down. Alderson says, 'Oh no you don't! You bought those engines complete. You're not leaving all this crap here!' Skinner replies, 'We're not. We're just pulling the heads off to get them in the car.' So Don goes back inside to answer the phones and get shit done. When he does, Skinner and Jobe start stuffing worthless stuff like water pumps, timing chain covers, push rods, and anything else not wanted under bushes, in dumpsters, behind pallets - anywhere to get rid of the stuff. They finish loading quickly, say goodbye, and hit the road before anyone notices the hidden parts and crap left behind.

They hop on the newly completed 405 freeway and head for Santa Monica and the Red Apple Motel. The only obstacle in their way is the massive hill at Mulholland Drive. Remember, their little Citroen only had nine horsepower, new. Again, not a joke. Nine horsepower. They had two adults, two 392 blocks, cranks, and heads in the back. Skinner - always messing with people's heads - puts on a beret and a red scarf around his neck to do his best Frenchman imitation. Jobe sinks down in his seat to get as low as possible, in case they see someone they know. And they're off!

They unload their treasures and call it a day.The first pieces of their dragster are home." 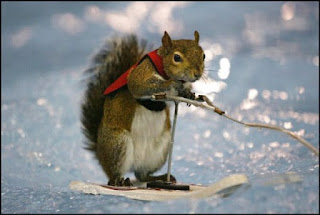 Oh yeah. Like you didn't see this coming from three paragraphs away. The Surfers have inspired everyone on Earth. And on water. 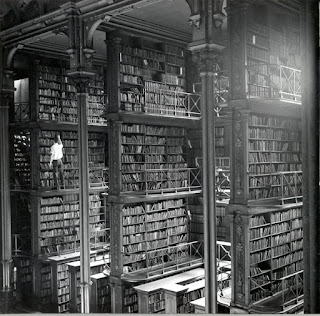 The dragster wing of the SGE research library. The section I'm standing at (in white shirt) is dedicated to The Surfers. There are thousands of photos in there, but not one showing any Surfers with a toolbox. I am now convinced that the Surfers' box never left the trunk of their '55 Chevy. 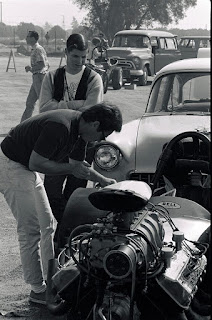 Zoom in tight to view a crescent wrench laying on the Surfers' iconic yellow injector scoop. The only image I could locate with a tool in sight. This speaks volumes of the Surfers' quest for efficiency. 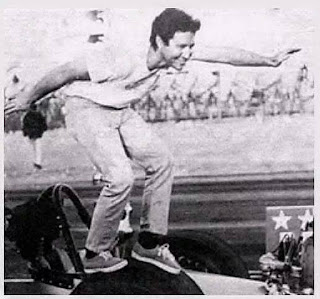 Like The Beatles, everyone had their favorite Surfer. This is Surfer Mike, hanging ten. (Photo courtesy of Bob Higginson) 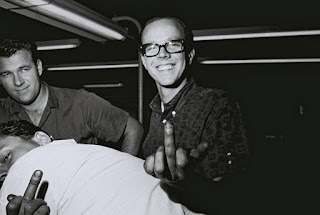 Surfer Bob and friends, showing off their manicures. (Photo courtesy of Bob Higginson) 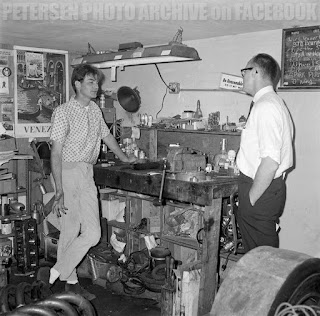 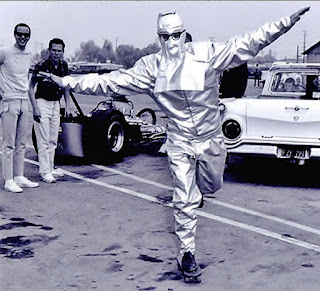 Honorary Surfer "Lotus John" Morton steered the car through its first baby steps, then went back to sports car racing. Skinner (in shades) enjoys the show in background. The Surfers earned their name with between-rounds shenanigans like this, while the competition thrashed furiously and wondered why the punks from Santa Monica enjoyed so much leisure time. Their secret was later revealed to be a 98% nitro load. Nobody saw that coming. (Charles Strutt photo courtesy of Bob Higginson) 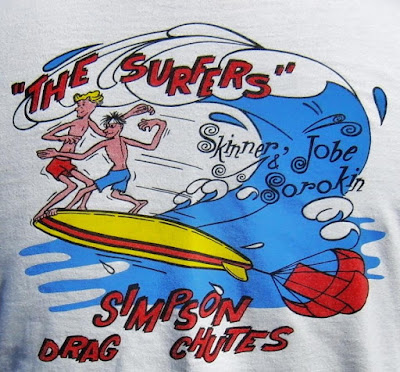