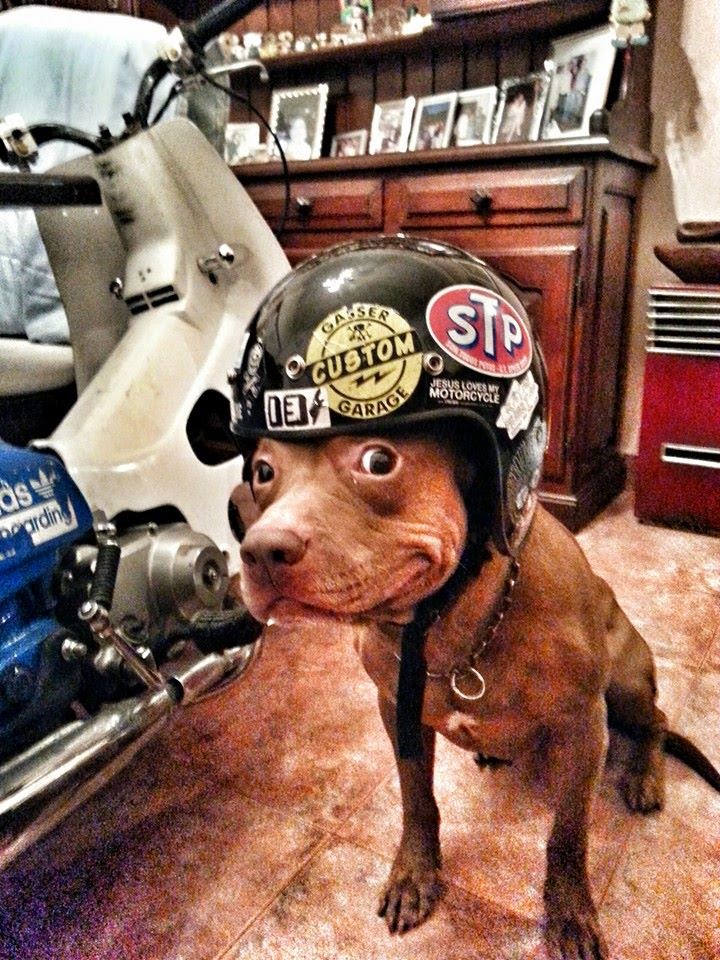 Rod, custom, and motorcycle builder Path Thirteen (and his dog) were looking forward to another summer of thrill rides and got more than they bargained for. The streets of Path's native Buenos Aires are now flowing more blood than traffic - a state of chaos that has turned his life upside-down. So he's packing up the family and shop tools, and making a run for the border to start anew in the U.S.. The dog is ready. And no, this is not a promotion for the Racing to America book (available at https://www.createspace.com/4338903 and at http://www.amazon.com/Racing-America-Global.../dp/1490539778), as it would be wrong to exploit a friend in a time of crisis for monetary gain. Go Path!  (Photo by Path 13 Photography)

Just like this blog, life is a hit and miss proposition. Unexpected challenges tend to present themselves at the most unexpected times. While there's never a good time for bad things to happen, there's also never a bad time for good things to happen. So we roll with it, or it rolls over us. Our paths are shaped by some events, and unaffected by others. The following is a typical case study. The iconic nine foot tall America's Most Beautiful Roadster trophy stands on a platform of plaques honoring the select few who have earned the proclamation. The Great Pacific Northwest is represented (twice!) by Portland, Oregon machinist Lonnie Gilbertson. Accolades like this can change a person's life in profound ways. Thankfully, it didn't have much effect on Lonnie. He just kept building. (Photo courtesy of Street Rodder magazine) 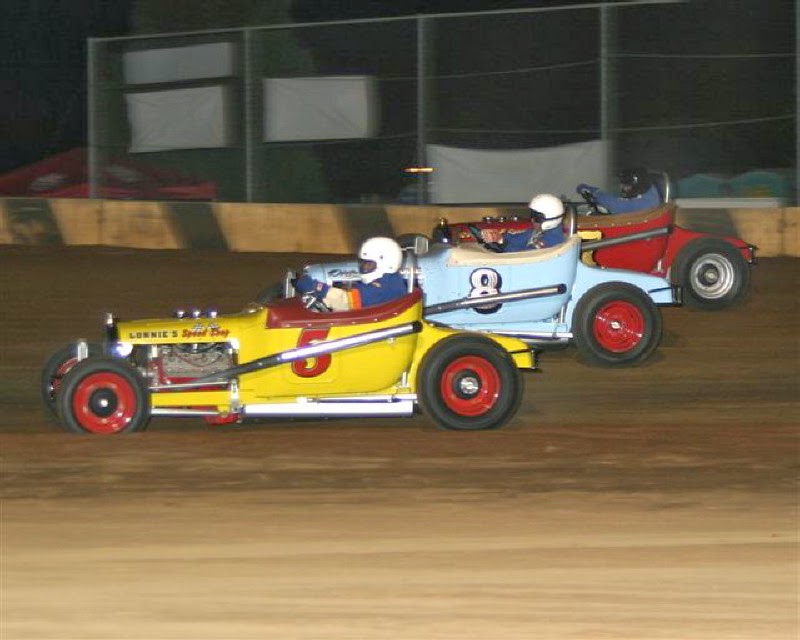 When he isn't crafting award winning vintage tin, Lonnie is tearing it up - illustrated here at the front of the pack on a Northwest dirt track. Bonus: Most of the cars are street legal and drive to the races. 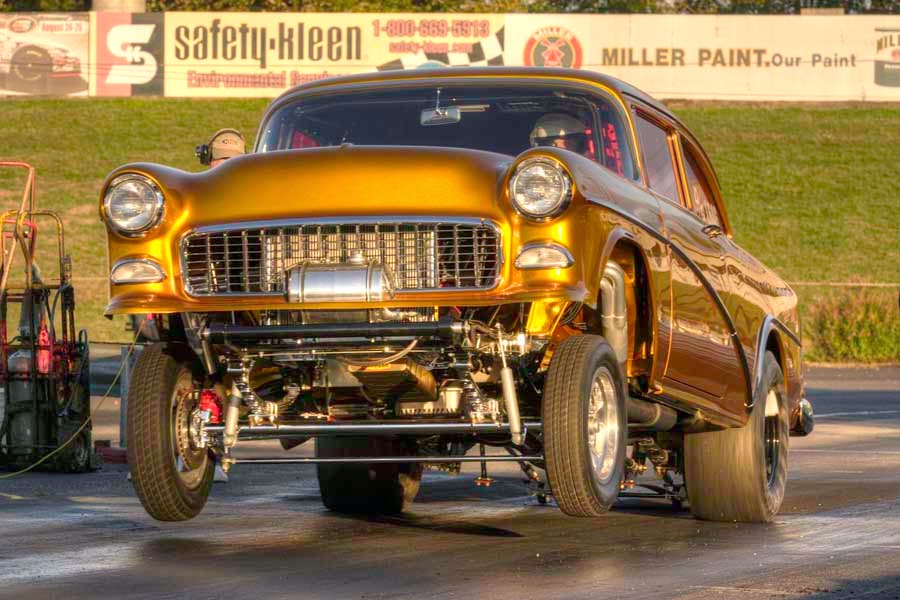 Lonnie's show and go '55 Chevy recently graced the cover of Street Rodder magazine. Life doesn't get much sweeter. Then, the unexpected happened... 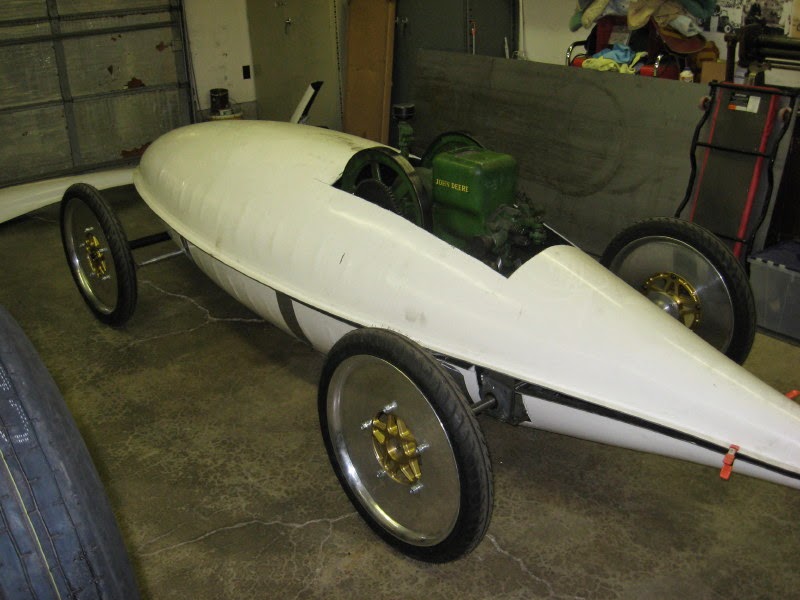 The visual hit is intriguing, but the story behind the concept is a jaw dropper. Lonnie took a few minutes from his chores at Gilbertson Machine Shop for an exclusive SGE mini- interview.

Scotty Gosson Exposed: Okay, alright... What is THIS all about?

Lonnie Gilbertson: Well, I've always been interested in the Hit and Miss motors.

SGE: Uh, 'Hit and Miss', being slang for a single stroke engine?

LG: Yes. In stock trim, the motor fires, or 'hits', and then coasts, or 'misses', until it slows down enough to hit again. It's governed at 500 RPM, stock. It only has one rocker arm, on the exhaust valve. The intake valve has a light spring on it, and opens by suction.

LG: When the opportunity to own one of these came up, I jumped on it. My first thought after I got it running was to build a scooter around it. I was surfing the web for ideas, when I came across a drawing by Matt Hurley of a Hit and Miss bellytank. I contacted him and told him I was going to build his artwork. I wanted him involved, as I couldn't take credit for the concept.

SGE: Good move. Not everyone gets credit for their work.

LG: At first, he didn't know who I was. I think he thought I was some kind of nut case.

LG: I told Matt that through my research, I found that bellytanks are designated as Lakesters, and that Lakesters with motors of 35 to 45 cubic inches run in Class J, and the record for that class is 167 MPH. My target is 50 MPH, and to achieve it, I plan to push it to 50, back off, and hope the car will maintain the speed.

SGE: This just keeps getting better. So, what kind of chassis and drivetrain will keep the little popper at peak efficiency?

LG: I fabricated the main chassis using the front axle and hubs from a Midget. Tires are 21" motorcycle, on custom wheel blanks from All American Wheel that I re-worked to fit the Midget hubs. The car will probably weigh about 1,000 pounds, as it has to be built by the rules to pass tech for 167 MPH. I chose to run a live rear axle - I can't afford any power loss going through a transmission or differential. I built the chain drive so I could change sprockets as needed, to reach my goal. The air-operated clutch assembly was designed by Jamie Fox, using (GM) Turbo 400 and C-6 (Ford) clutch drums that will be applied by air to parts taken from a Lenco trans.

SGE: I am so lovin' this! Can you tweak any more power out of that engine?

LG: Dick Elverud (famous Porsche race engine builder) will be building the Hit and Miss. At it's present configuration, it's 45 cubic inches, and makes one and a half horsepower at 500 RPM. Our hope is to keep the same cubic inches, increase the compression, and increase the engine speed to 1,000 to 1,500 RPM. I'm going to try to supercharge it by means of a squirrel-cage fan, hooked to an electric motor. We can't do anything mechanical that will take power away from the motor. Our hope is three to four and a half horsepower.

SGE: What was that about squirrels?

SGE: Oh, nothing... Lonnie, I would love to be involved in this project...

LG: I have to get back to work, Scotty. Just one last thing: When I started this, I thought people would laugh and think I was nuts. I'm overwhelmed with the interest in my project, and the acceptance by people of what I'm trying to do. I have an engineer friend who's intrigued, from an engineering standpoint, to see how fast we can go with such limited power. I know the amount of work involved - by a lot of people, including Marty Strode - to go 50 MPH at Bonneville seems dumb. But I feel it's all supposed to be about the fun.

That was the last I heard from Lonnie. But Marty Strode did click off a few more shots of the Hit and Miss Special while it was at his shop for tin and 'cage work... 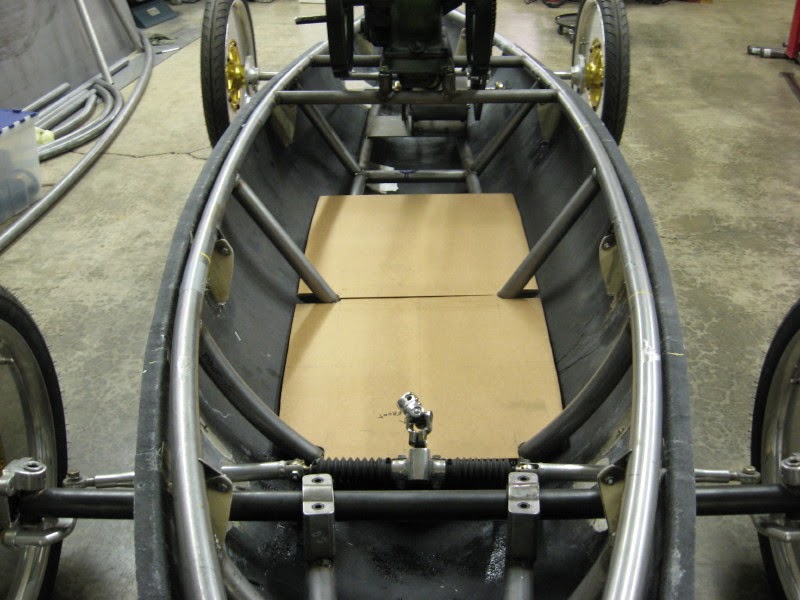 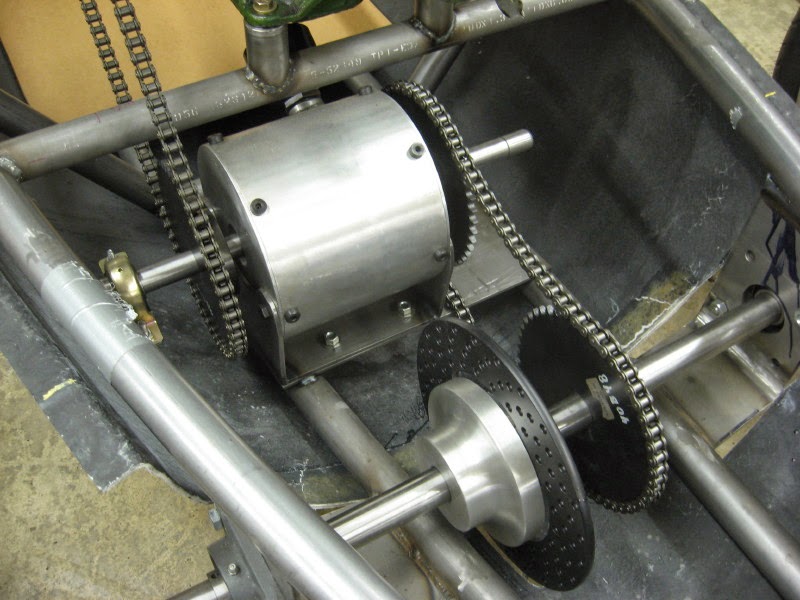 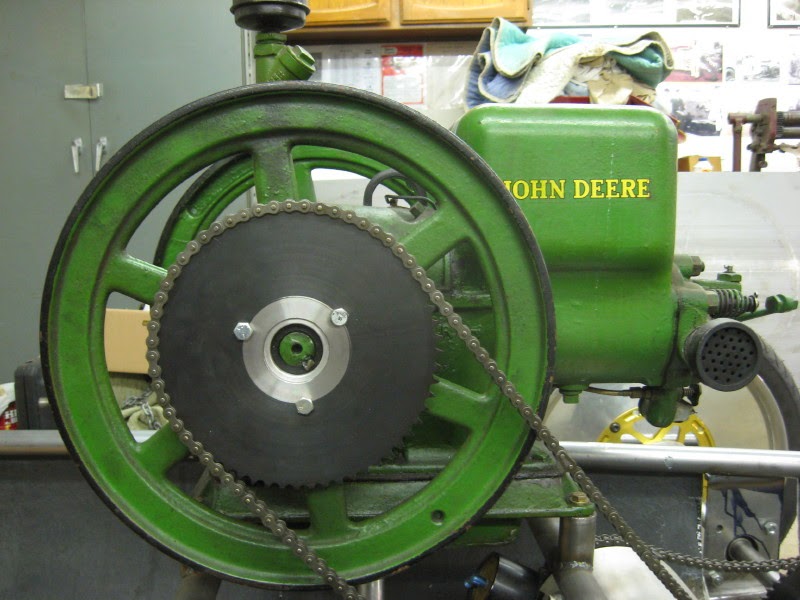 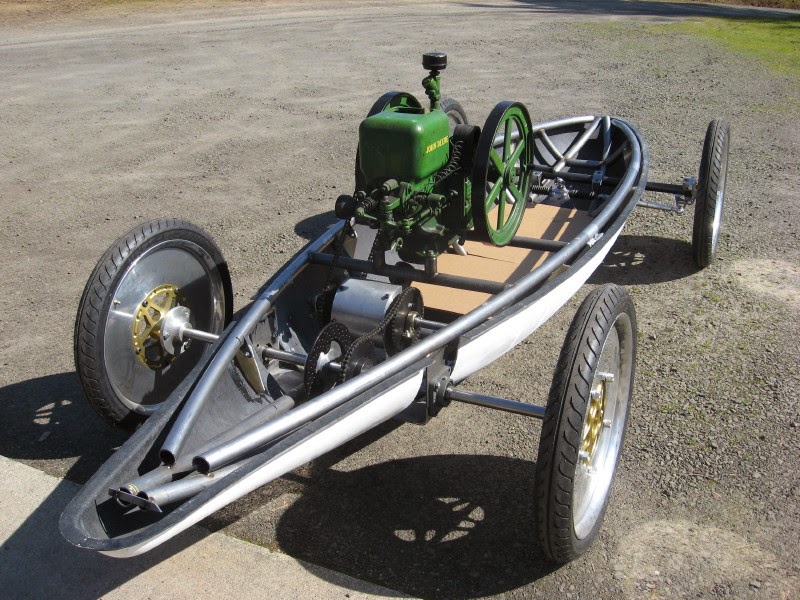 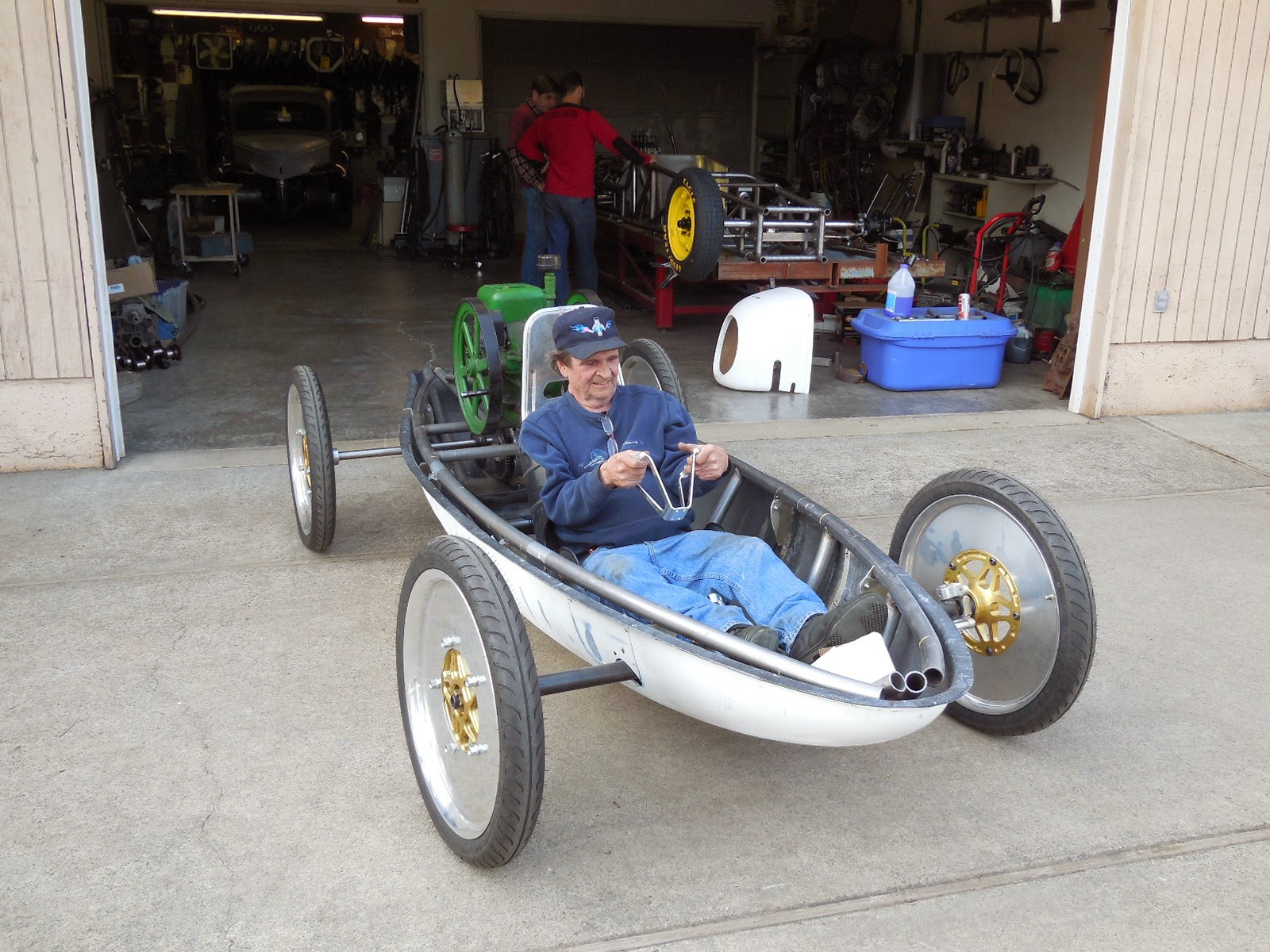 Marty Strode's shop is no hit and miss operation. Projects may roll in and out, but they all roll out a lot prettier than when they rolled in. 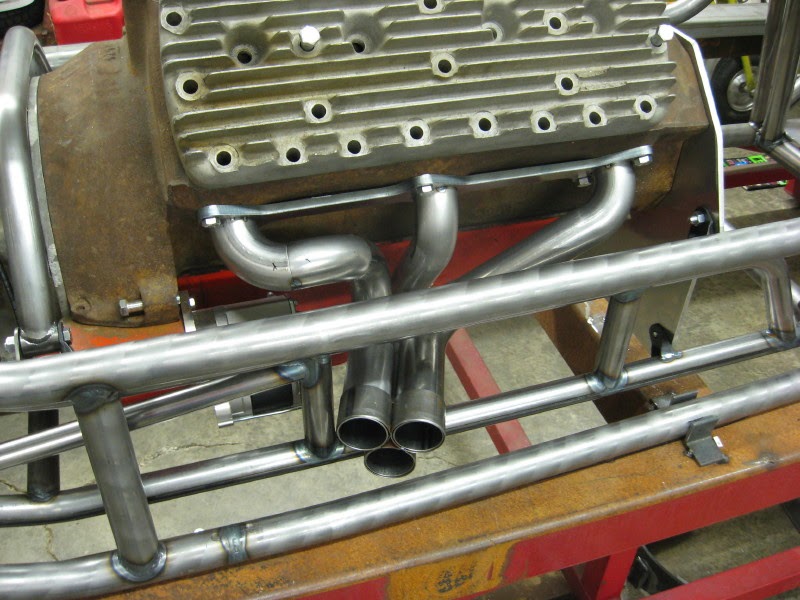 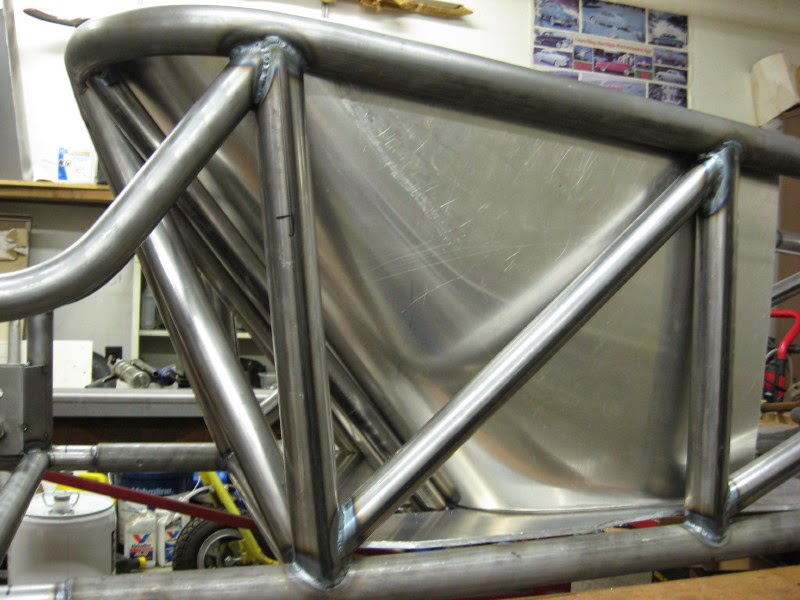 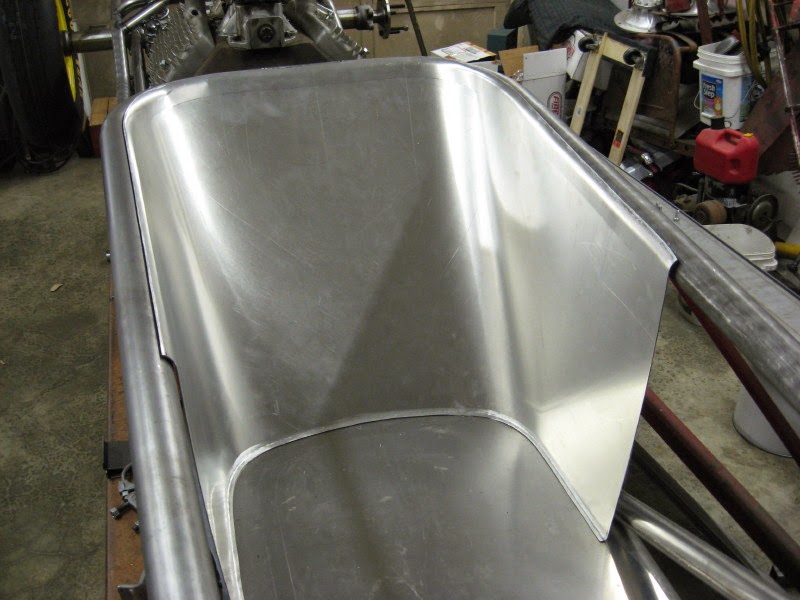 Mister Marty also got a good start on the tin work, with this sumptuous lounger for Lindsay's aching back. 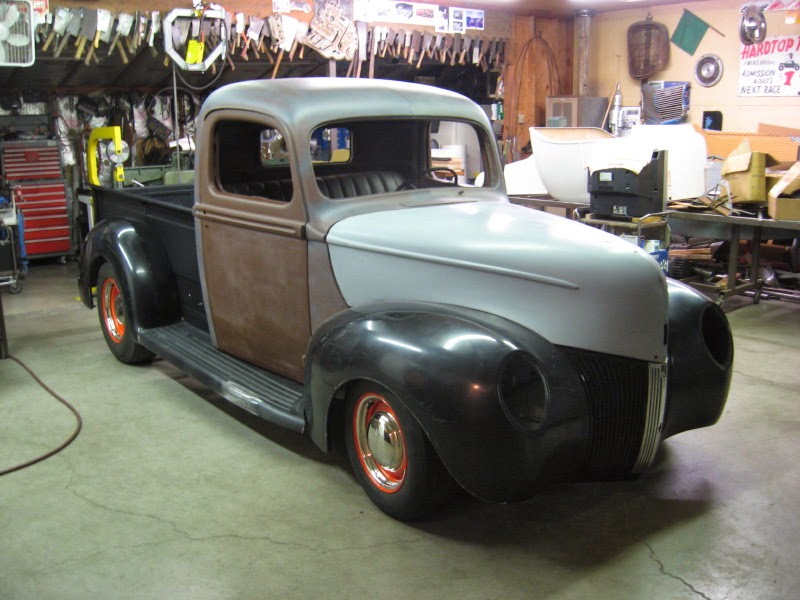 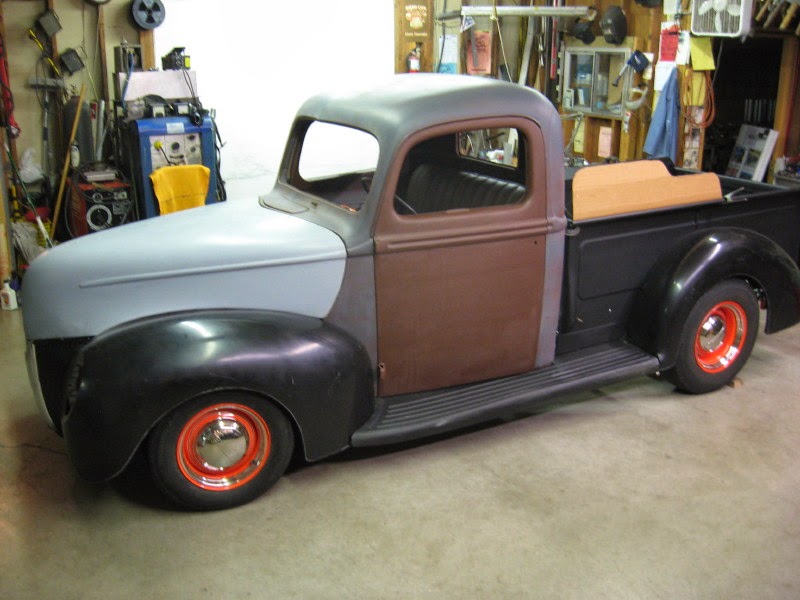 On his lunch break, Marty built a new shop truck. The flathead-powered '40 Ford will also serve push car duty at Bonneville. During our visit, Marty also delivered a baby in the parking lot and put a new roof on the shop. 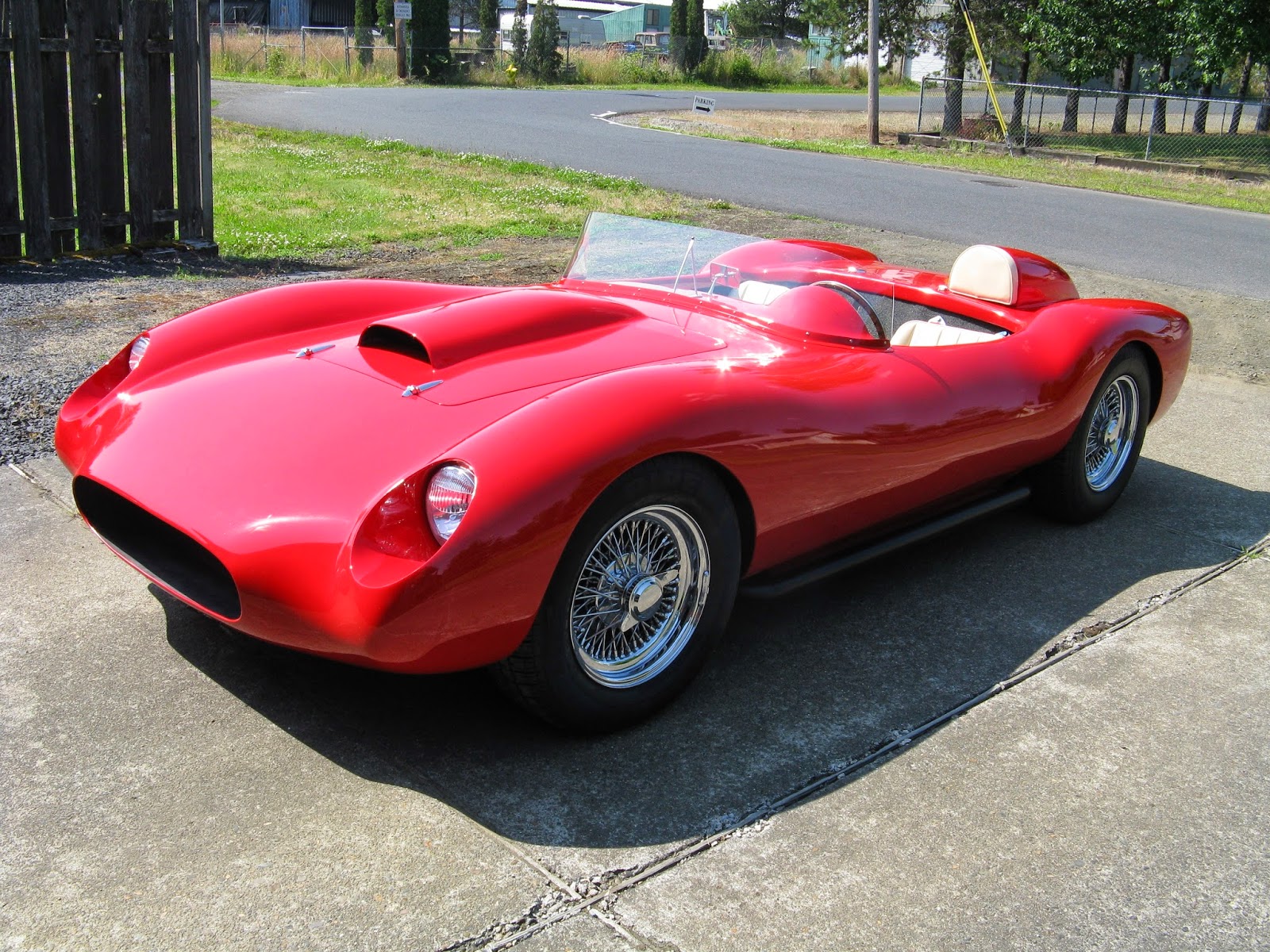 Lonnie's fiberglass bellytank body will be finessed by Leighton Mangle, who carved this one-off sports car shell from a bunch of foam blocks that he glued together. This guy's good. Marty enlightens,"Leighton picked the things he liked best between a Ferrari and a Maserati and built it." (Photos by Marty Strode)

Last week's blog spoke of the tensions that permeated Dr. Lockjaw's Custom Metal emporium when we clashed on the design parameters of the rear spring perch for my Model A project. We were both too busy to discuss it until this Sunday's session... 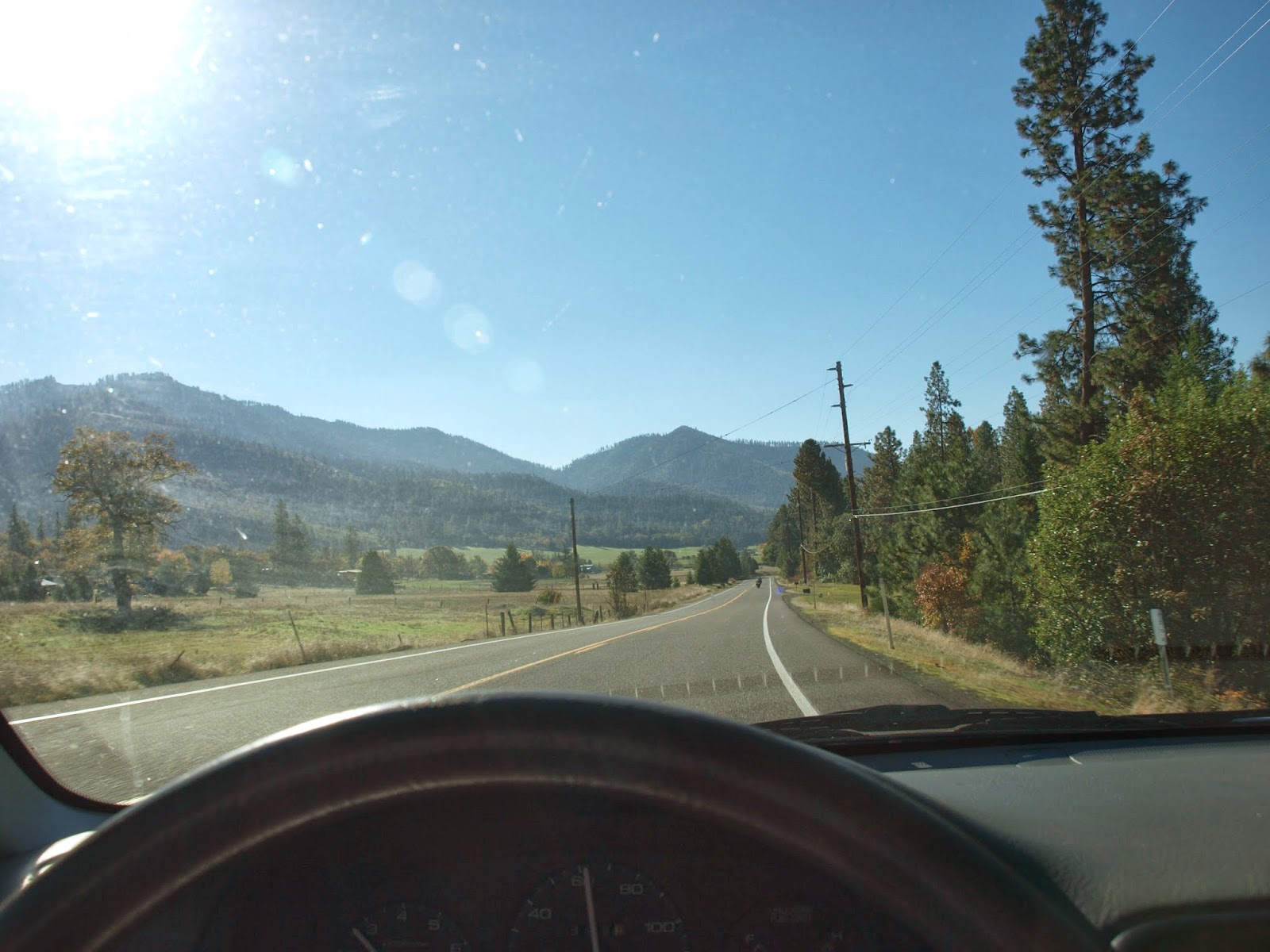 I've raved before on this blog of the joys experienced on Hwy 238, leading to Custom Metal. My Sunday morning commute is usually free of traffic and livestock, allowing for a pure driving experience. But on this Sunday, a slow moving vehicle ahead put me 13th in line, as more cars piled up behind me. I watched the speedo dive from 60 to 20 MPH, where it stayed for several long minutes. 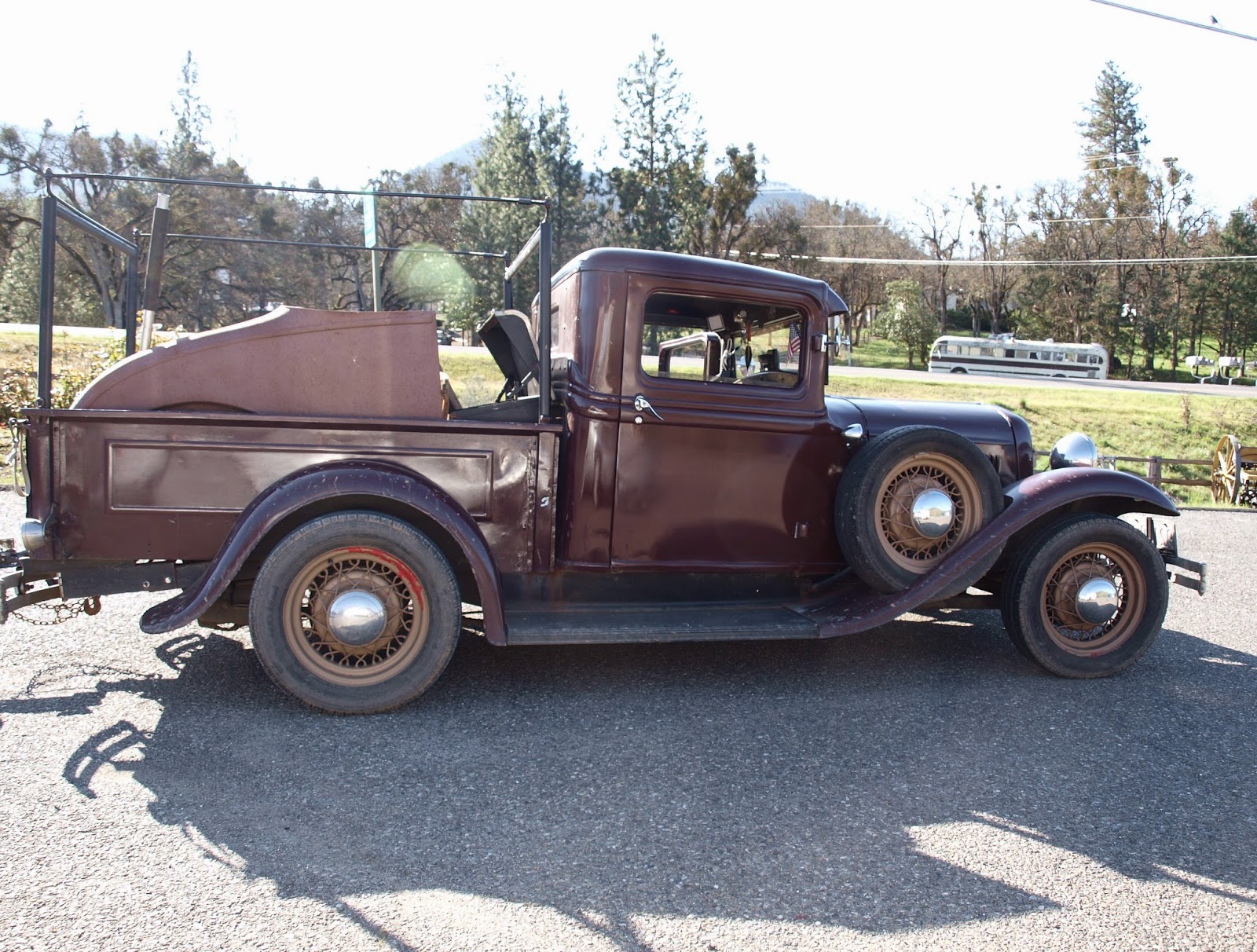 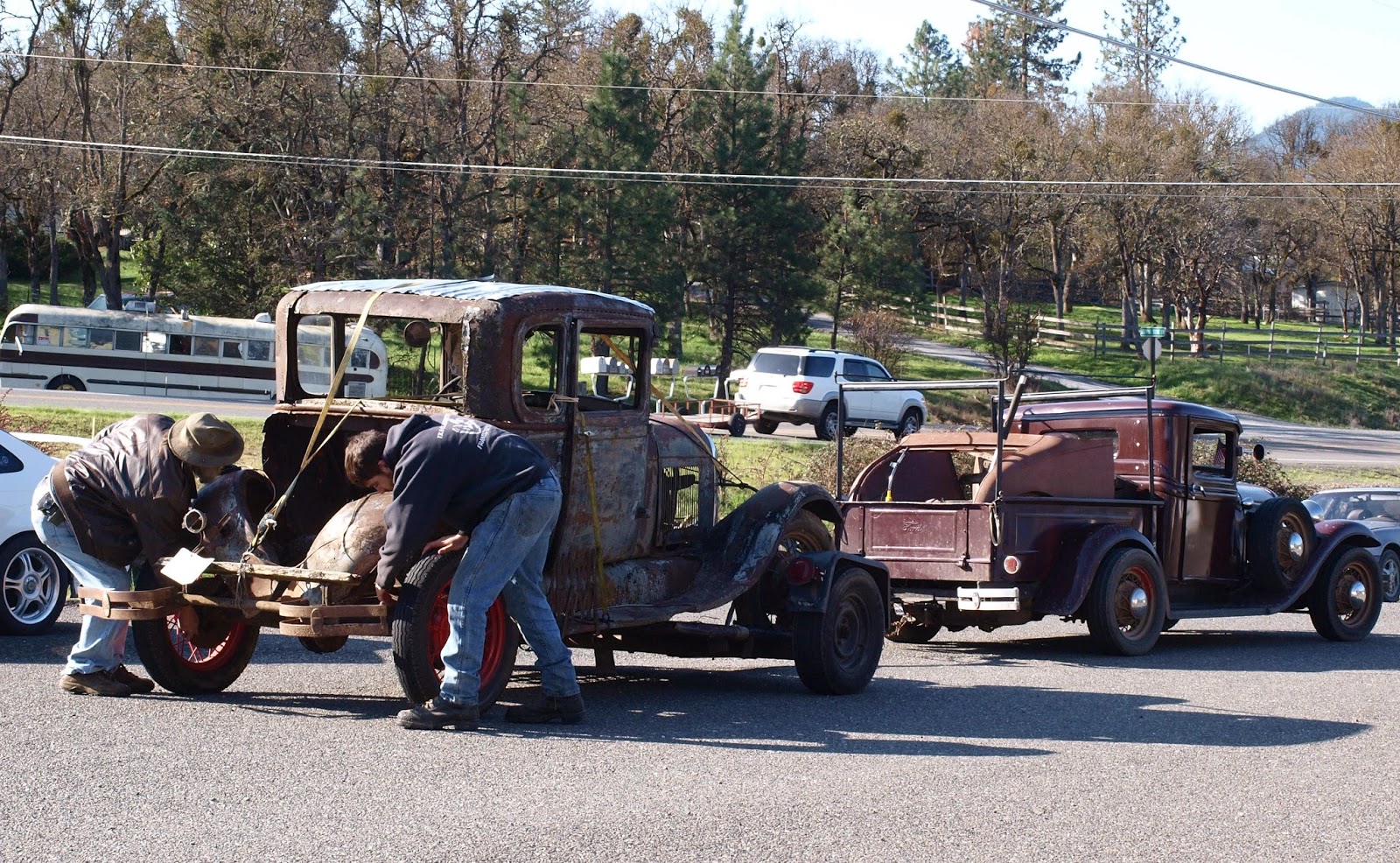 A wider view reveals the entire precious and precarious load, being checked here at roadside. These guys left northern California hours earlier, en route to Hugo, Oregon. They still had a ways to go with the ramshackle homemade trailer, employing a broken come-along as a safety chain. 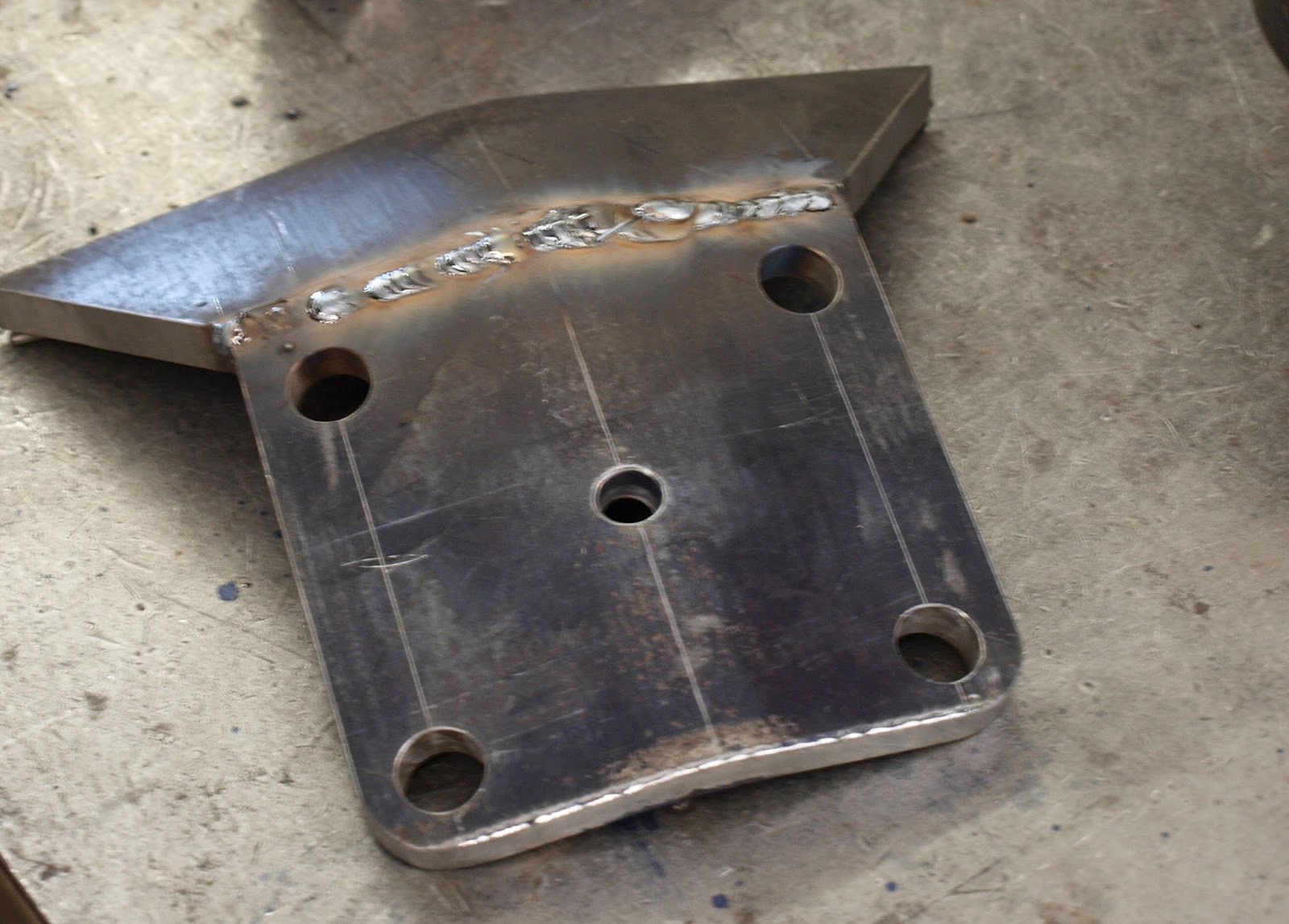 Where Doc and I left off last week. I felt this perfunctory rear suicide spring perch needed stylized side gussets, while Doc stood adamant on pure function. We both theoretically won, via an uneasy compromise that ultimately left us both feeling defeated. The debate has subsided to whispered mumbles - for now... 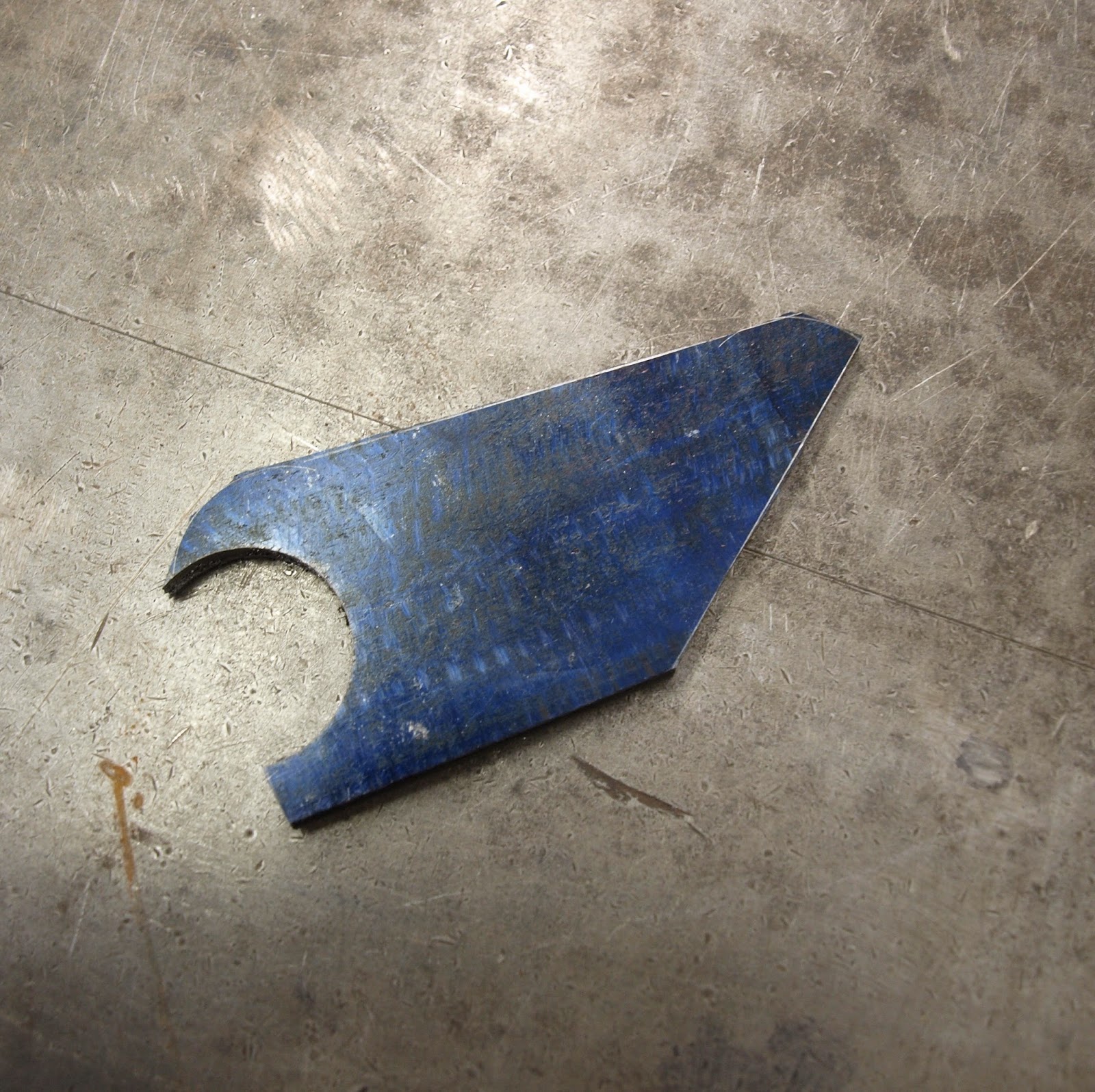 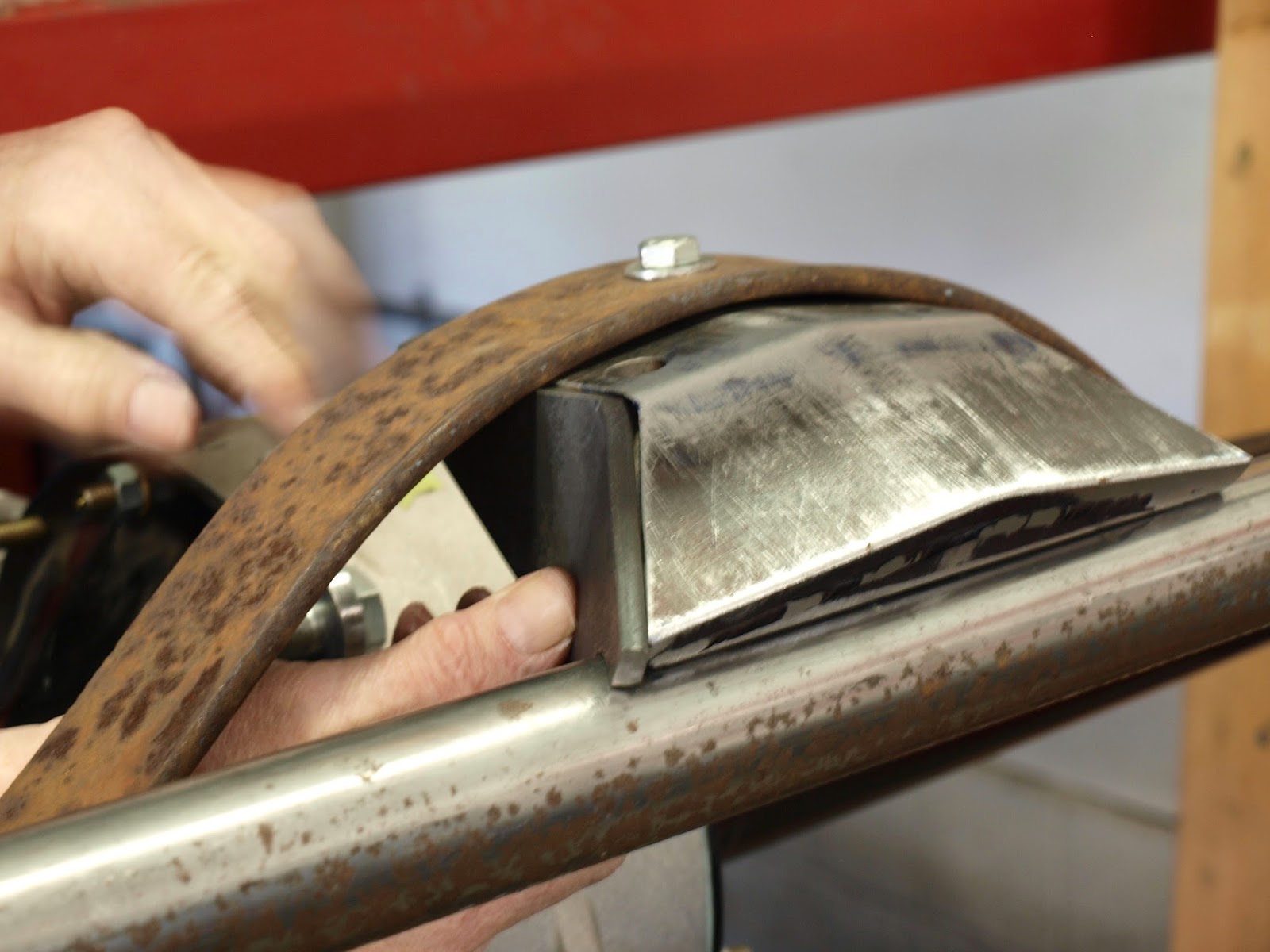 We snuck up on proper fitment after folding the gusset in the hydraulic press. 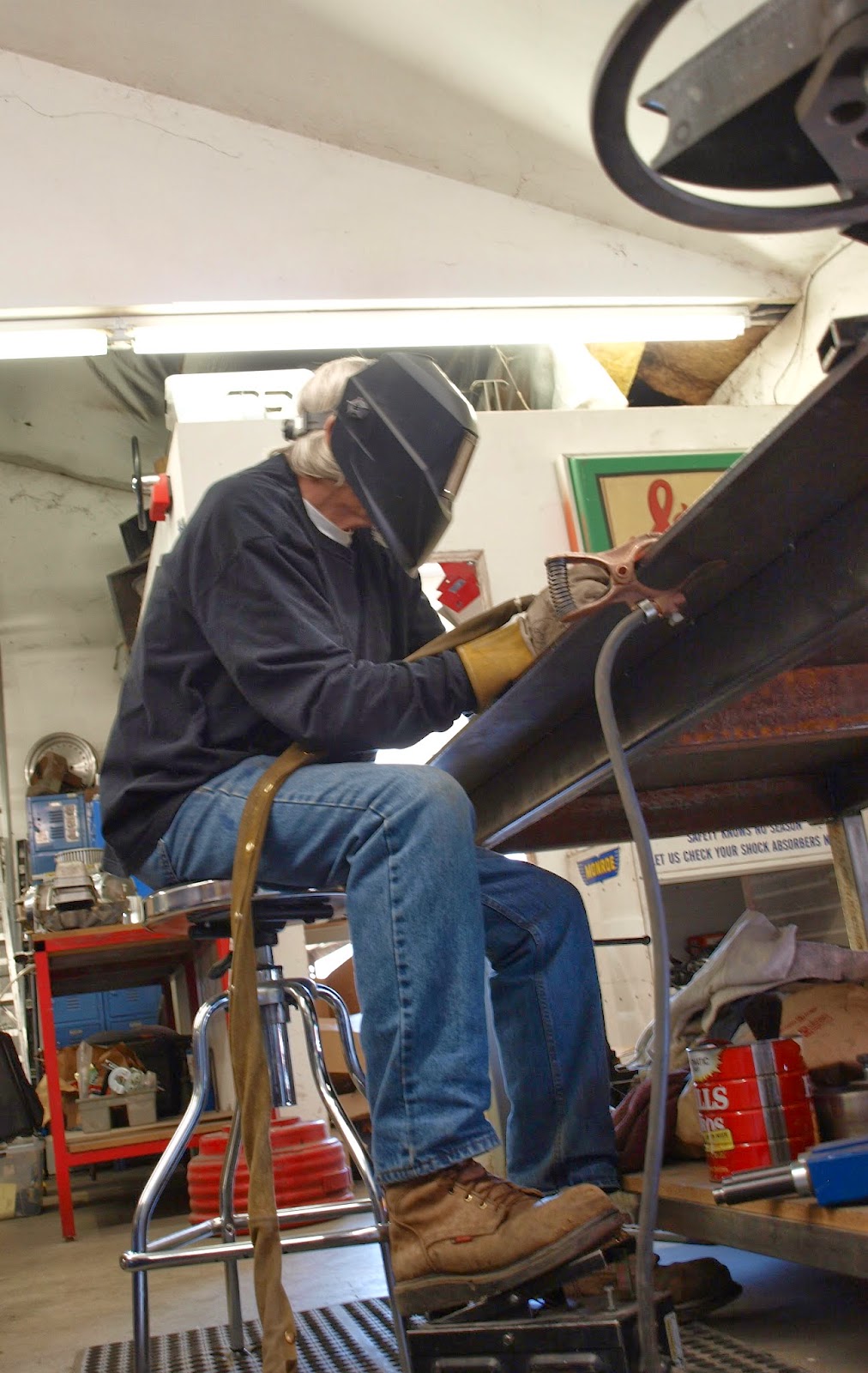 Doc waved his magic TIG wand over the perch and made it one with the universe. 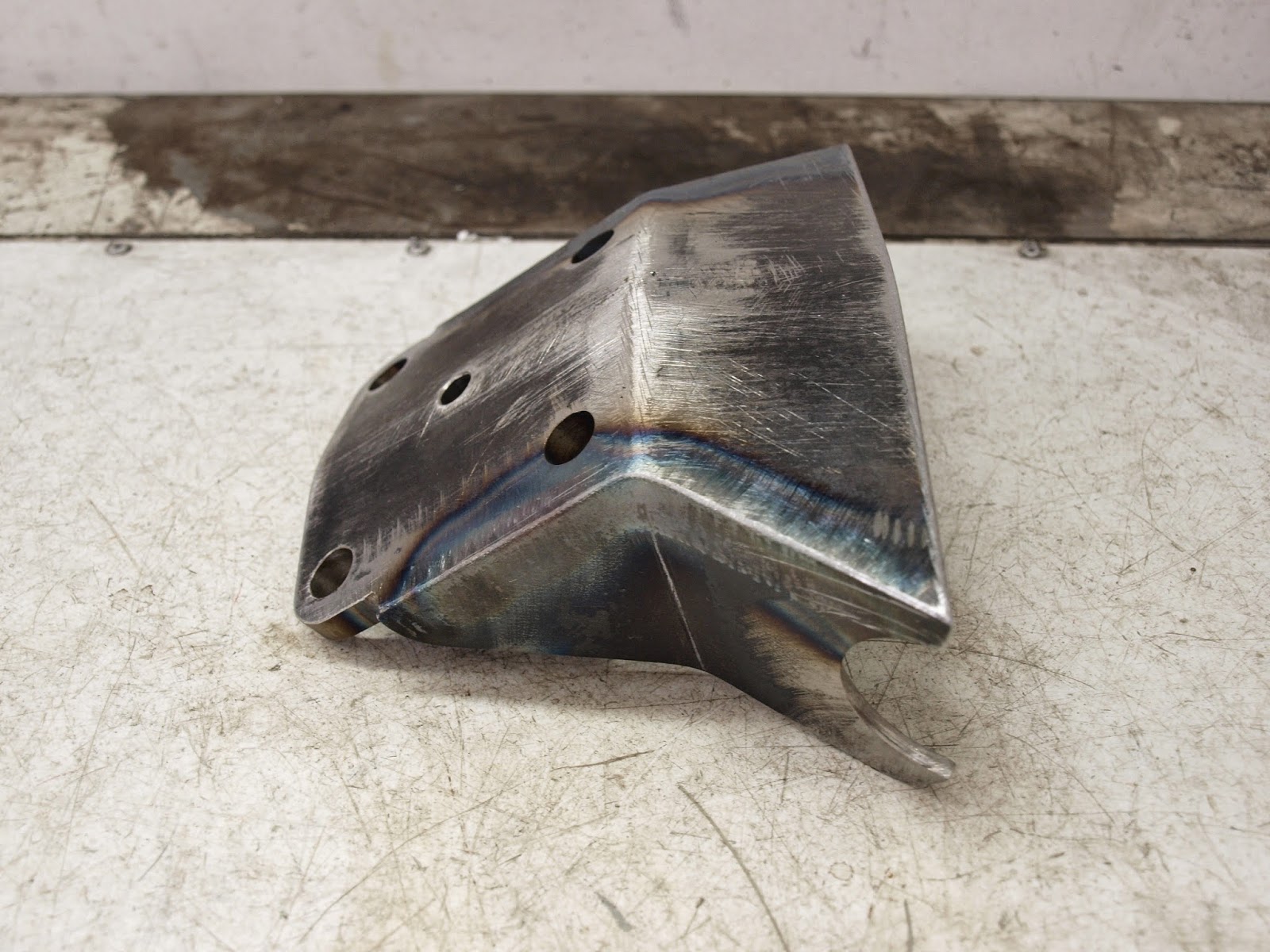 After some clean-up, we had a nice piece. The folds lend it the personality I felt it lacked, while remaining 99% functional. The perch will double as a taillight mount. 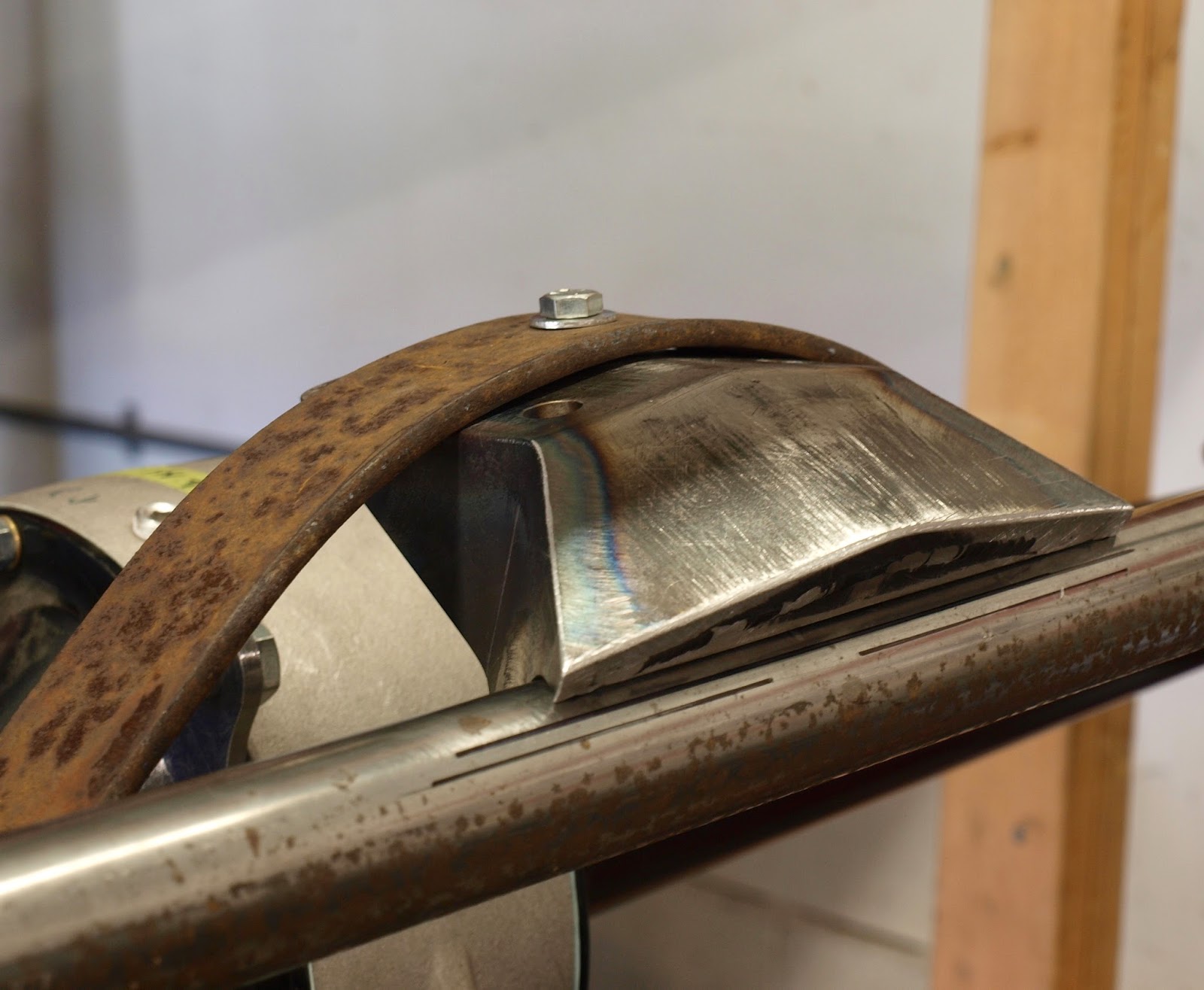 Ta da. The perch will be supported by triangulated round tubing, tied into the tubes above and below the perch. 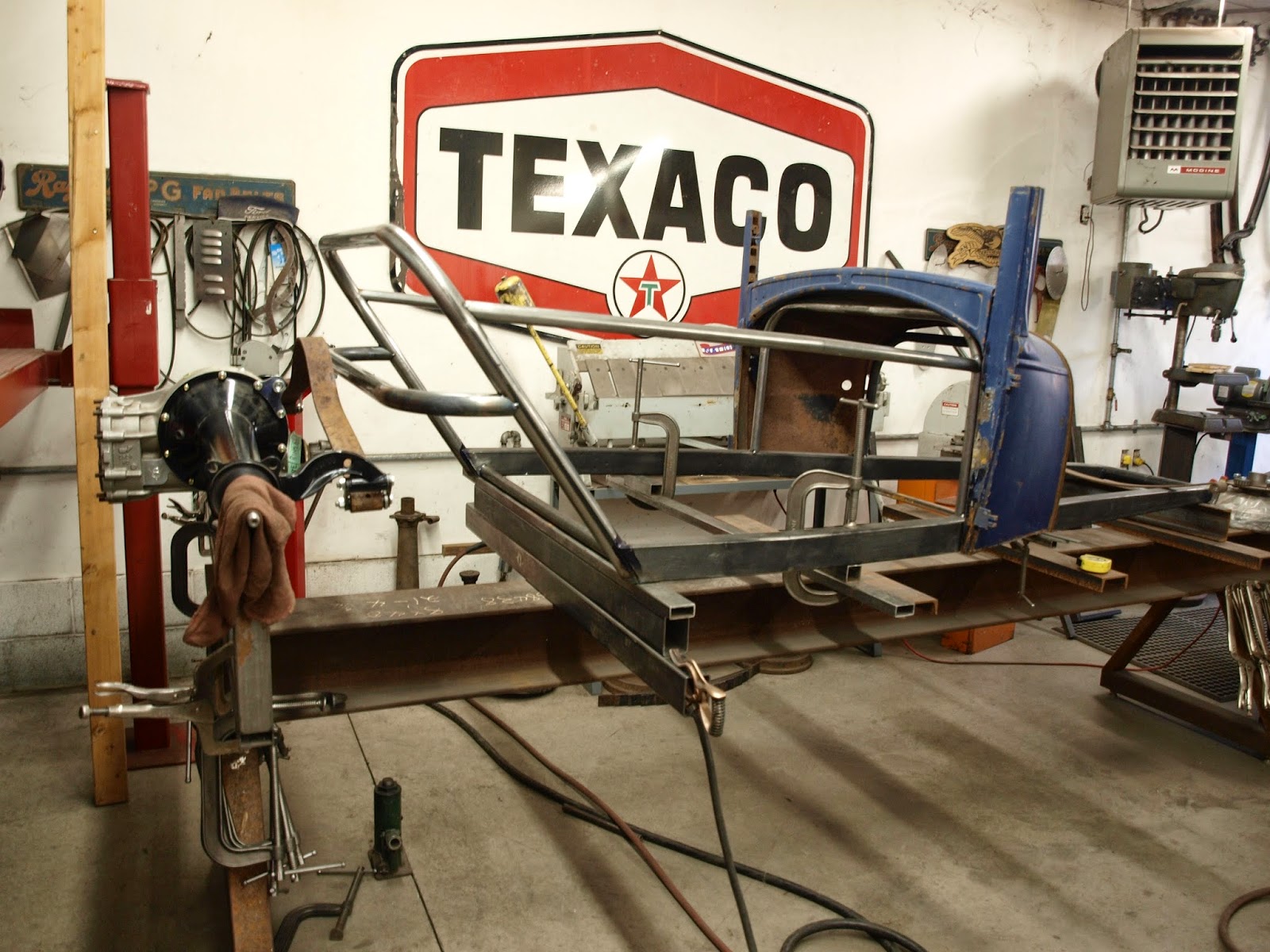 A look at the big picture for reference. For you new arrivals, this will basically be a two-seat Lakes Modified, built from a '31 Briggs body cowl and a mystery back half. These baby steps are taken two hours at a time, on most Sundays. I'm learning patience at a snail's pace. (Scotty shots) 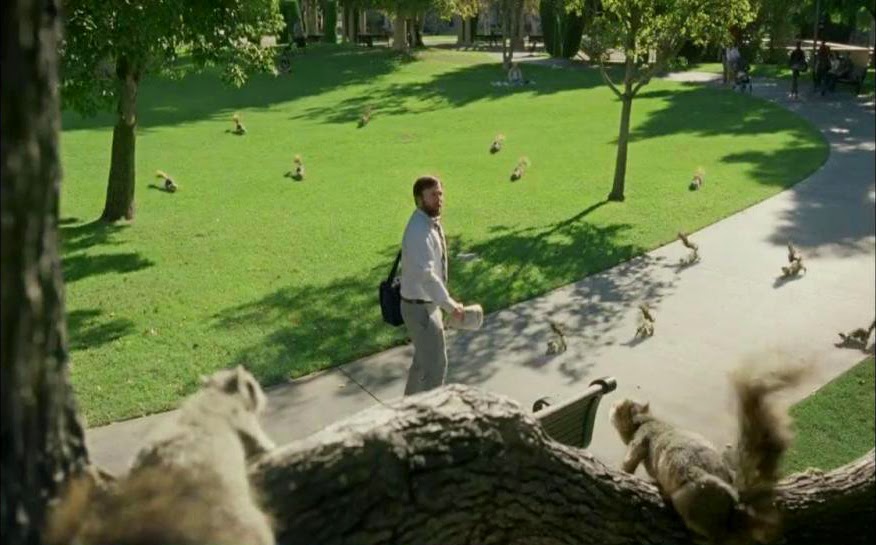 If we've learned anything this week, it's how life can change in a heartbeat, as this DirectTV representative is discovering. Don't fight it. Change is good. If you can't beat 'em, join 'em. That's squirrel protocol at SGE, anyway. (Image courtesy of Motormouth Ray) 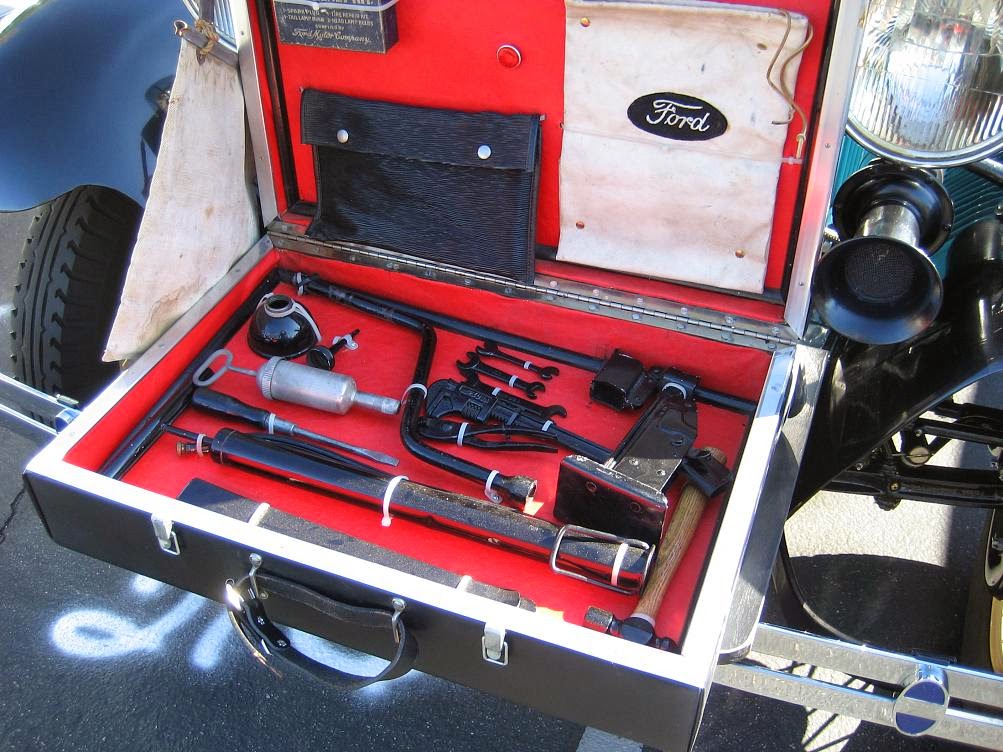 Who could have guessed that hot rod stalwart Dean Lowe had a gennie streak in him? Not us. This shot of a factory issue Model A tool kit (posing with a resto-A) changes everything! (Photo by Dean Lowe) 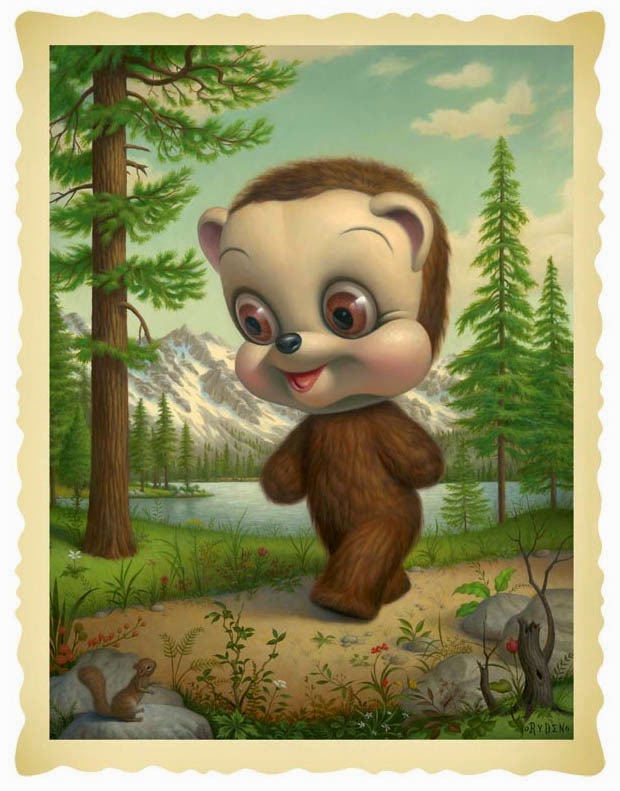